Nicolò Granese did a breakdown of his Think Tank cinematic character project made from scratch: modeling, texturing, lighting, rendering, and more.

Nicolò Granese did a breakdown of his Think Tank cinematic character project made from scratch: modeling, texturing, lighting, rendering, and more. 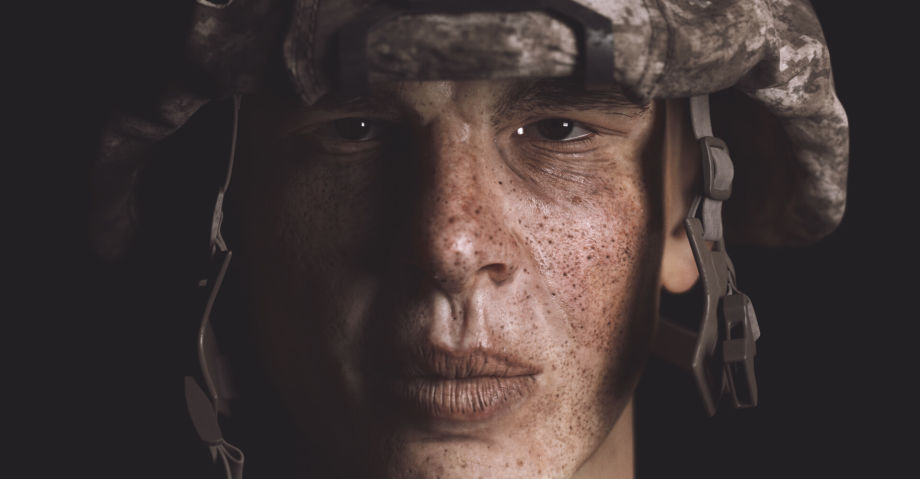 Hi all! My name is Nicolò, I’m 22 and I live in Vigevano, near Milan (Italy). Currently, I’m a student at Think Tank Training Centre (a 1-year online program) and I’m studying Modeling for Film. 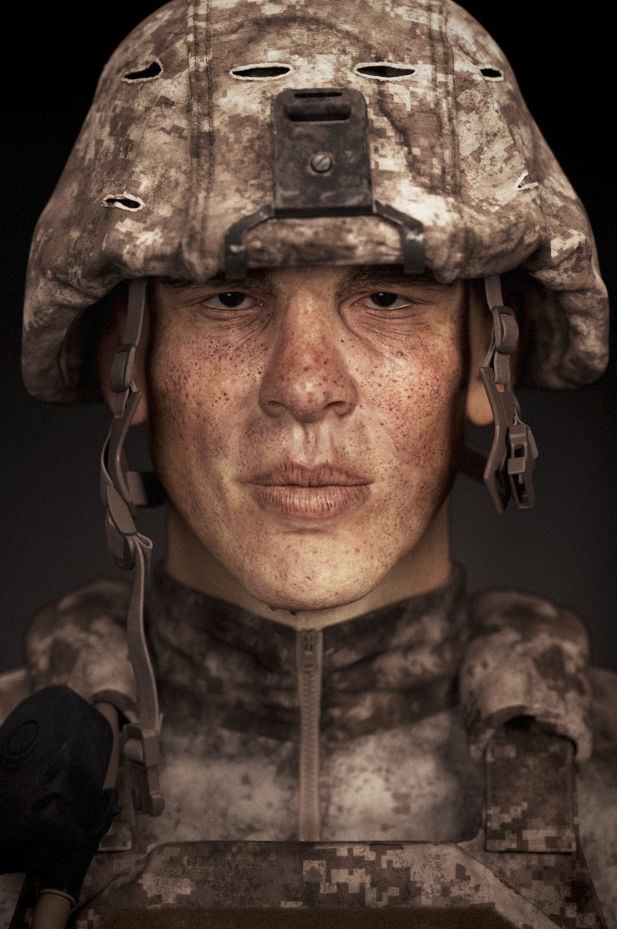 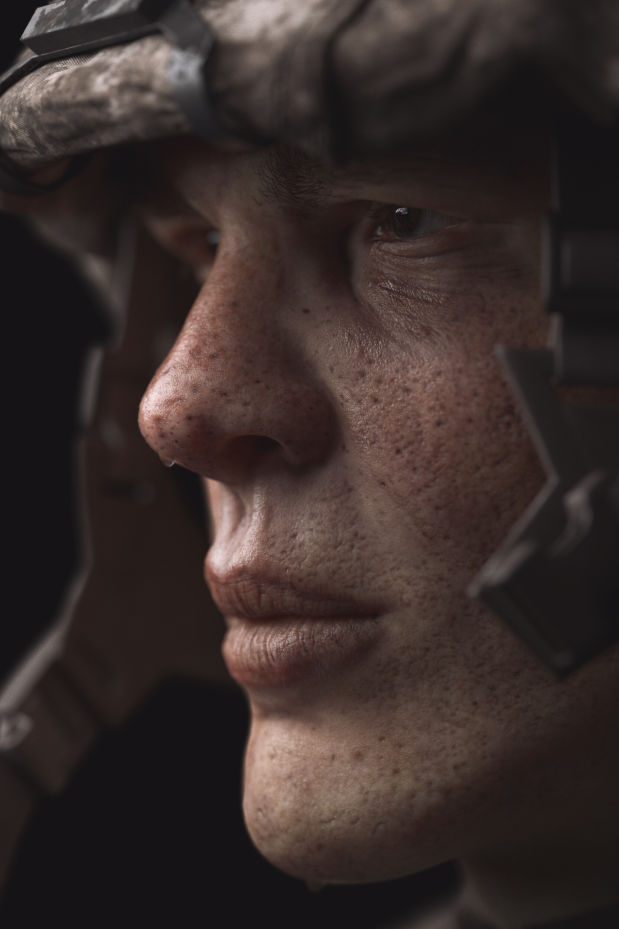 I worked on this project for the final submission of the second term where every student had to create a full asset starting from scratch (modeling, retopology, UVs, texturing, shading, lighting, rendering) in four weeks. I’ve learned a lot following the online lessons. Step by step they introduce you to more advanced lessons and more complex topics starting from the basics, studying Maya up to ZBrush and the organic/hard-surface modeling. Being always side by side to professionals with a lot of experience guarantees you a higher level, pushing you to always improve your ability in meeting the required standards. 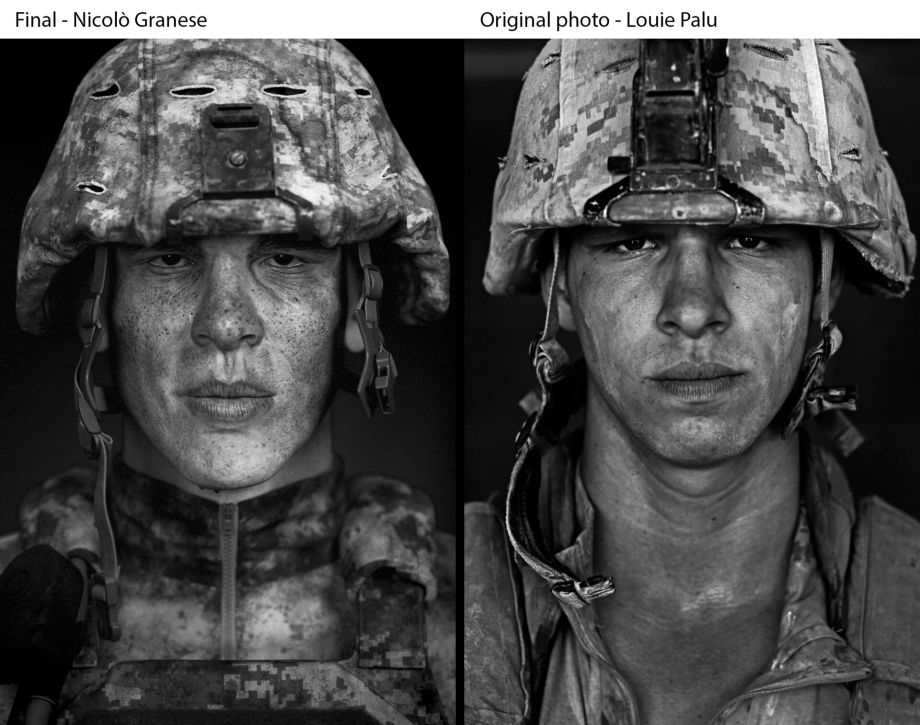 I chose this photograph for two main reasons: the first one is that I wanted to push myself completely out of my comfort zone and try to create a character from scratch, and the second reason is my strong passion for the military life. This photo tells through a simple glance the suffering at war.

My main goal was to be able to create a realistic character. As you can see it wasn’t a likeness exercise, and I didn’t reproduce 100% of the photo accurately, but I was inspired to reproduce the mood through the facial expression. I modeled all the equipment that I extended to the lower part of the chest creating a half body. I focused mainly on the head and the helmet, but I modeled all the accessories of the tactical vest too.

Starting from a sphere in ZBrush I began to block out the head, initially at a very low level of resolution to mark the general shapes. Then, cranking up gradually the resolution of Dynamesh, I sculpted the nose, the mouth, the eyes, and the ears. The most difficult part was the sculpting of the mouth. It’s crucial to look at the model from all the angles and not to focus on just one view. By doing that you will have a more complete view of the model making shapes and volumes more accurate. Even on the eyes, I spent a lot of time for the right shapes trying to give the soldier a feeling that he’s alive and has a soul. 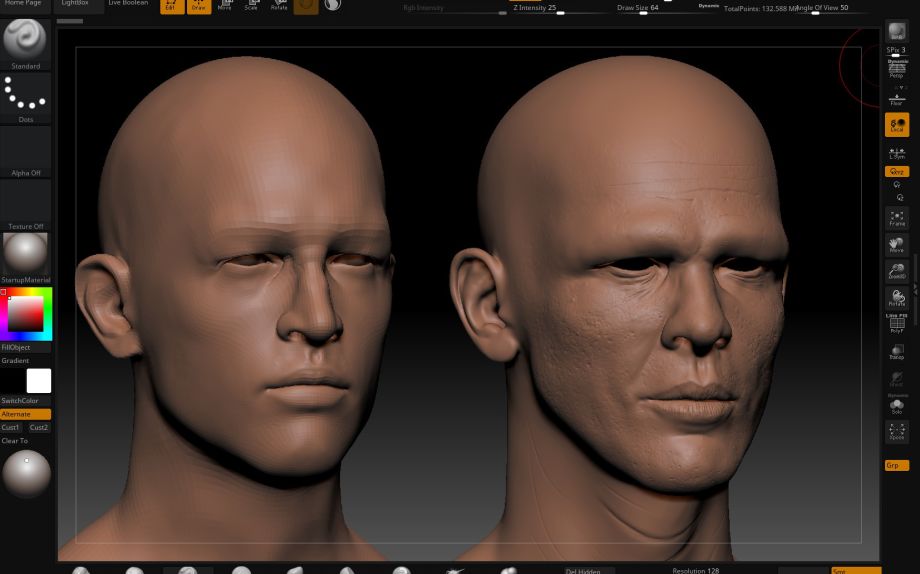 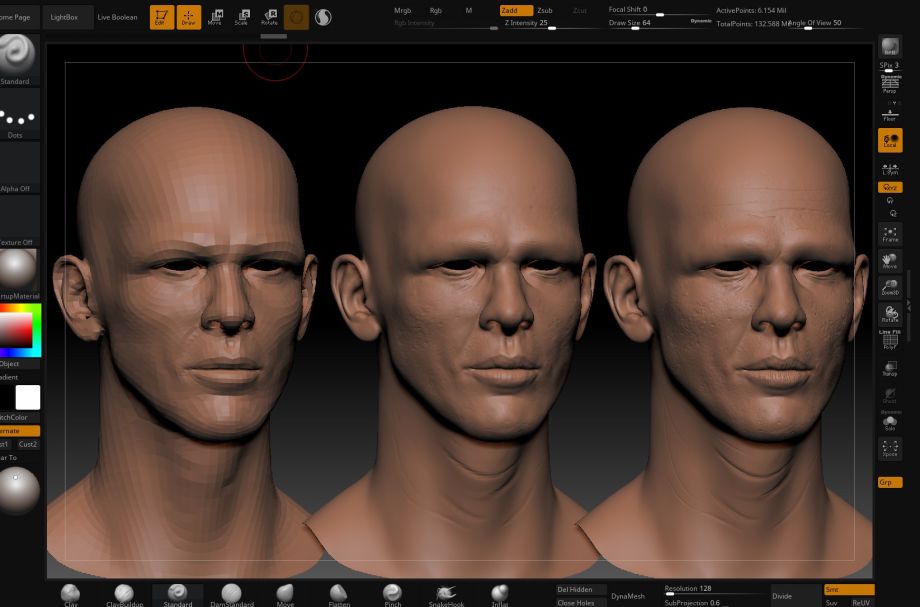 For the part of the tactical vest and the helmet, I started from basic shapes in Maya modeling the different base meshes that would then be used in ZBrush to add the details. Most of the objects are basic cubes modified as needed, like the pockets for example. For the magazines, I used some references (all views: side, front, top, and bottom) and modeled them following the shapes on the photos always trying to keep the shapes as simple as possibile.

Once the low poly modeling was finished, I modified the base mesh through the soft selection to fit the shape on the the character’s body. 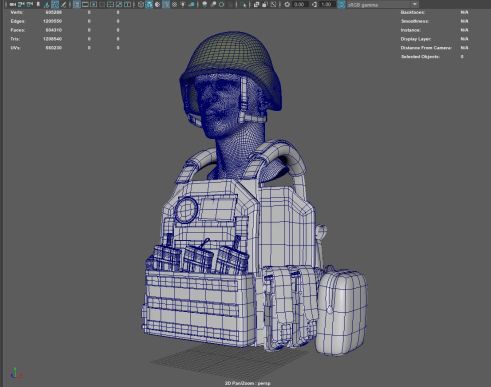 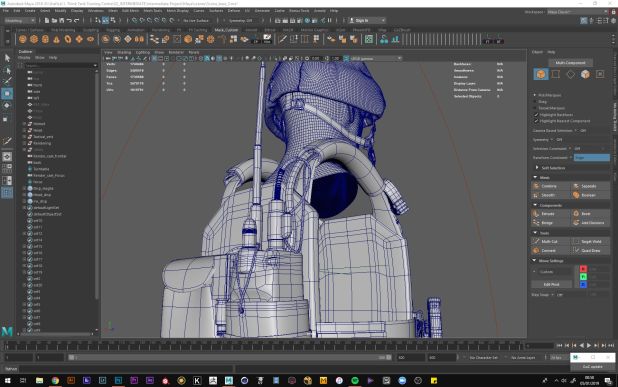 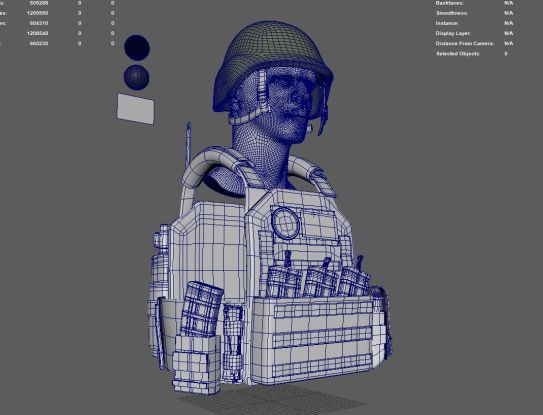 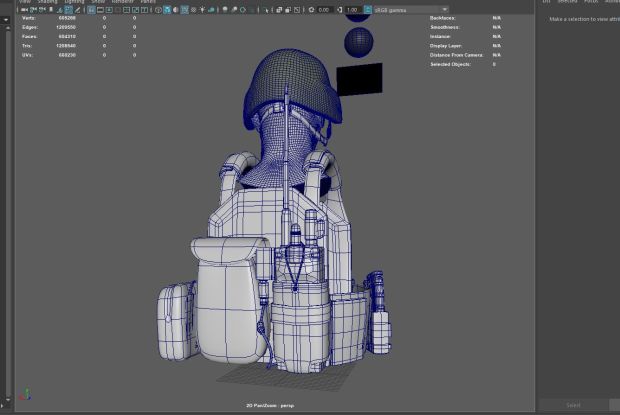 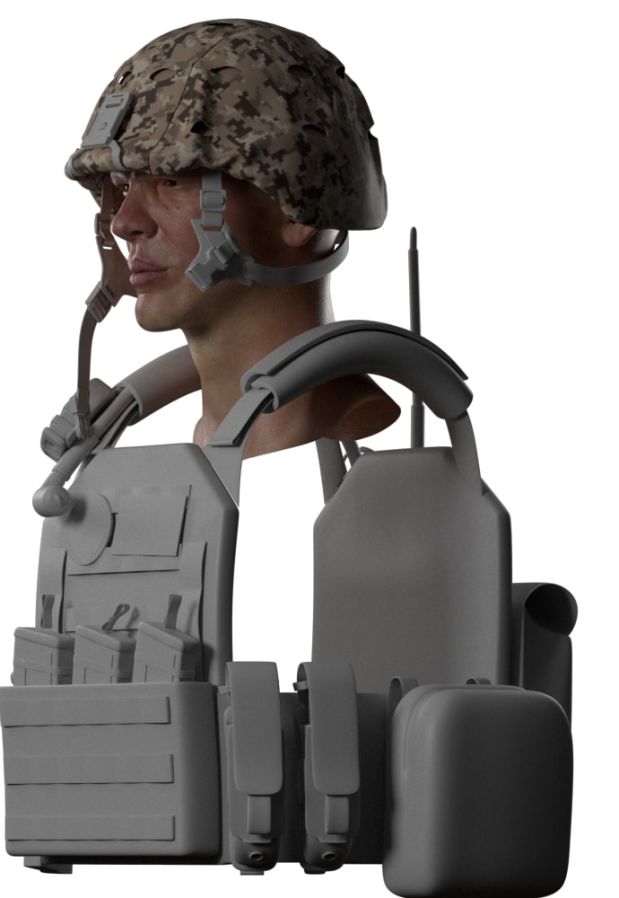 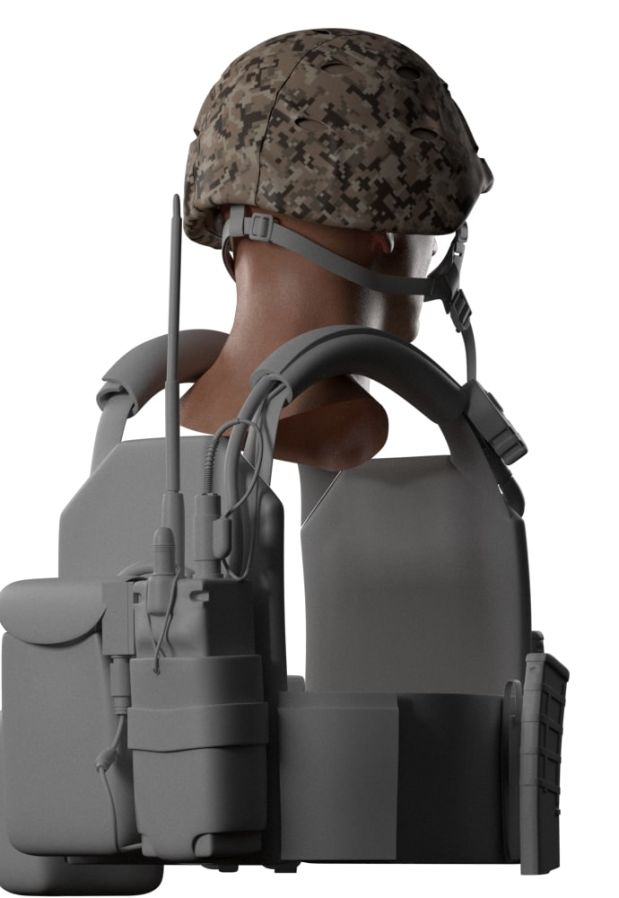 The head was done by following different approaches. Starting from the beginning: 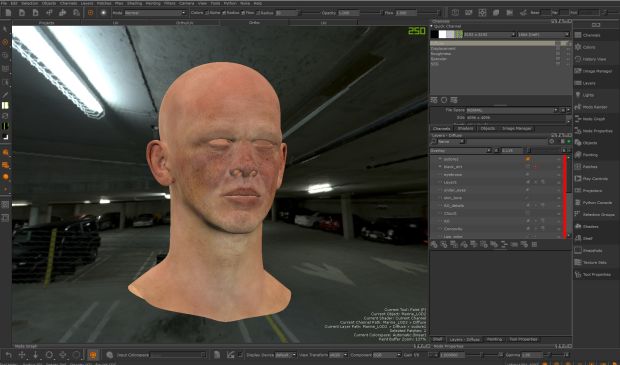 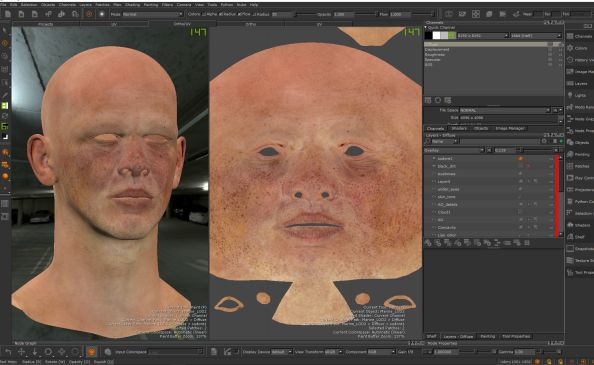 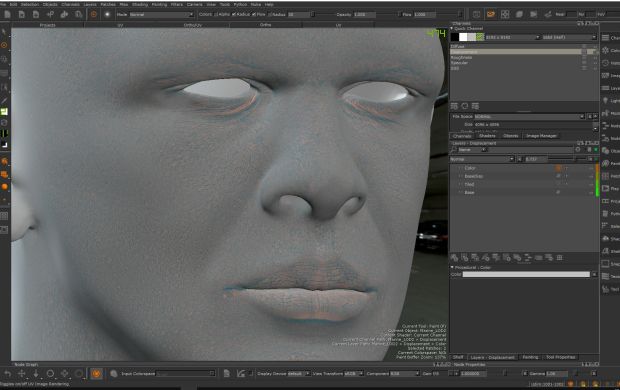 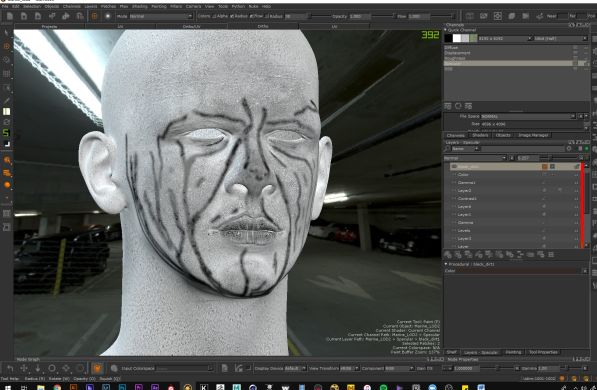 The most important challenge that I had to face was to make the diffuse map realistic. It’s important not to stop after the first pass, the human skin is full of little imperfections!

For creating the eyes I followed the fantastic method used in the project of the digital Emily. I started by searching some high-quality photos on Google and modifying to make them usable. No reflections and shadows should be present in the diffuse map! Through Photoshop, I modified the original photo and erased the imperfections.

Once I finished the diffuse map, I focused on the cornea. The method used is a bit tricky to explain, so I’ll attach here a screen of the node graph which shows step by step how it’s done: 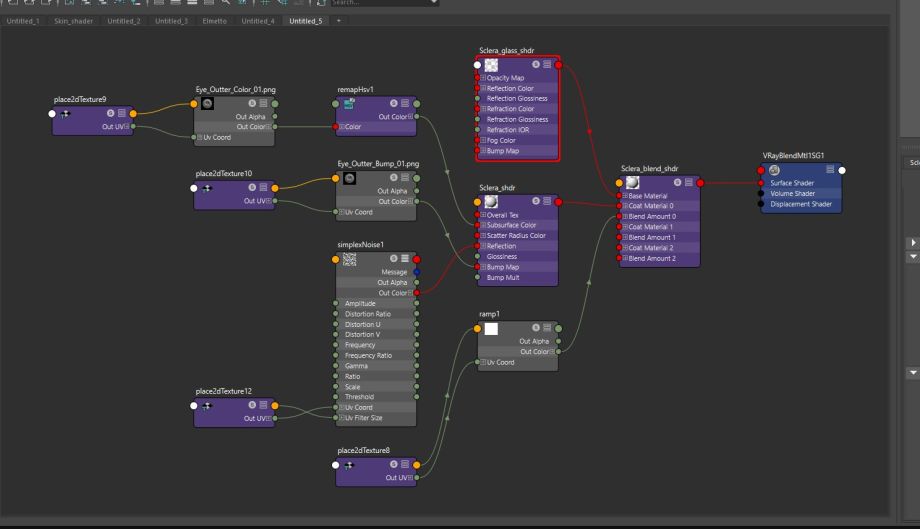 I spent a lot of time tweaking the eyes and trying to find a way to show some emotional feelings through them. It hasn’t been easy, mostly because this was my first try, but I’m pretty happy with the result!

The lighting isn’t that complex. For the final shot, I used 3 lights: one for the fill on the top right, another one as a key light on the top left and a small top light to illuminate the helmet. For the other render, I used just a single light and tried to reproduce the style of the portrait. I was inspired by Steve Jobs’ photo, I think that this type of light looks beautiful on the human face!

As a rendering engine, I used V-Ray, exporting everything to high resolution (2500px+) and cranking down the noise threshold at 0.020. With it, the render will be much cleaner. I also needed to optimize the V-Ray options to reduce the time of the render. Due to having the head with SSS and all the different displacements connected, the time increases a lot!

Connecting all the textures together requires knowing the Hypershade in Maya a little, mostly for the head which two different displacements and all the others maps like the diffuse, specular etc. are applied to. It’s necessary to spend some time to set everything in the right way in order to achieve a realistic look. Below you can see the shader for the head: 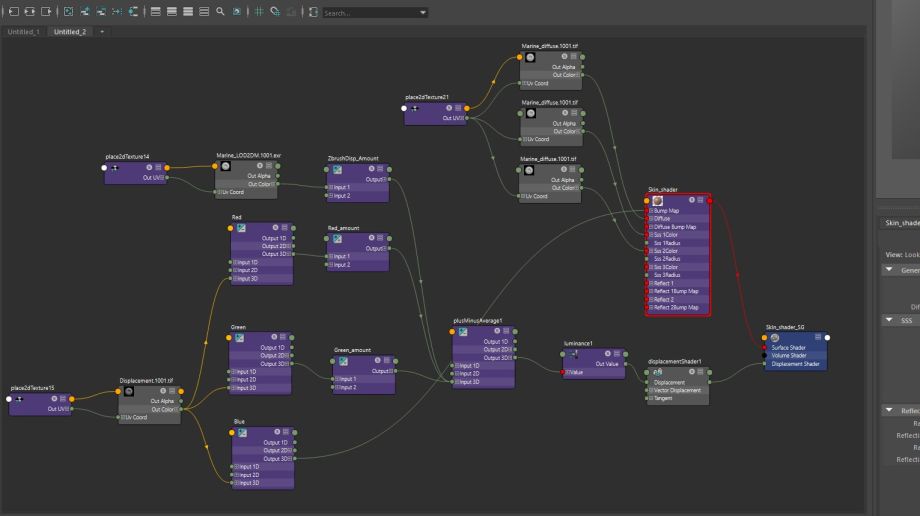 It was a really interesting project in terms of learning which allowed me to improve the organic and hard-surface modeling skills. I didn’t have much time, so it was more difficult to complete the project, but I made sure to speed up some steps and optimize the production. Having a checklist to monitor the process daily is crucial for working efficiently!