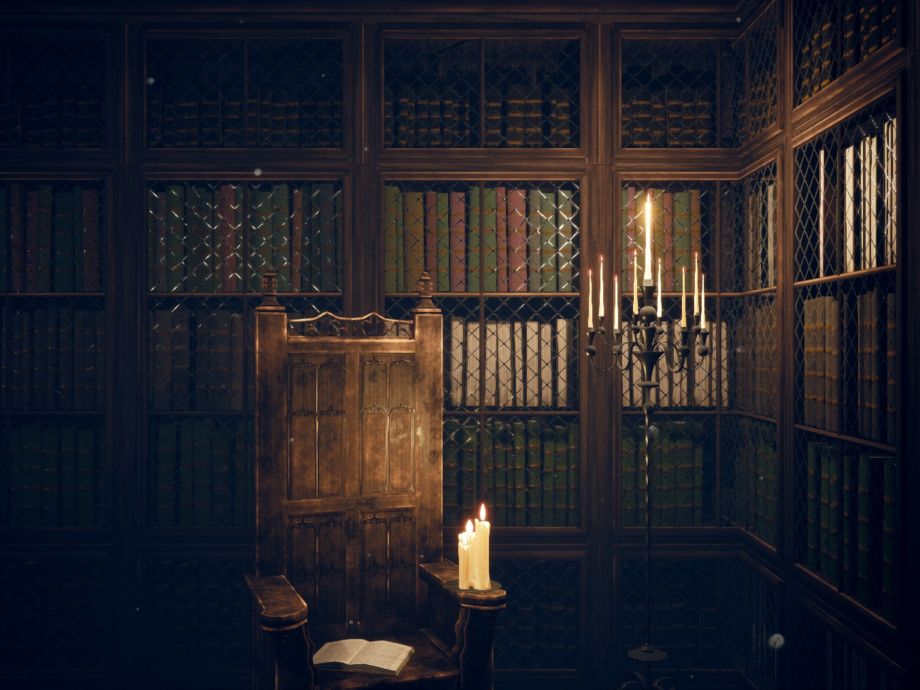 Hi, my name is Eugen Čanić, I am a 3D artist from Croatia. I studied architecture in Zagreb, Croatia and I’ve chosen to specialize in Environment art and Level design for video games. During my college years, I started learning 3D modeling aimed at architecture with software like Sketchup, Rhino, Revit. Only after my 3rd year of college did I discover the wonderful world of programs that make game production a reality. I started experimenting and working in 3ds Max, Maya, Substance Suite, ZBrush and so on… and could not stop myself. I decided I wanted to pursue a career in game development. Since then I worked with a few local indie teams on several games and worked at various studios as a 3D modeler. The project for CGMA class was just a stepping stone for my portfolio with which I aim to enter the games industry. 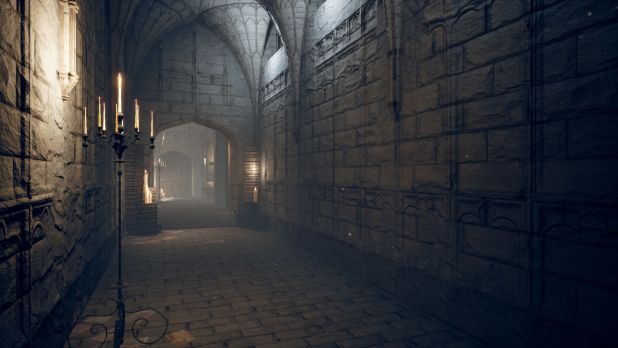 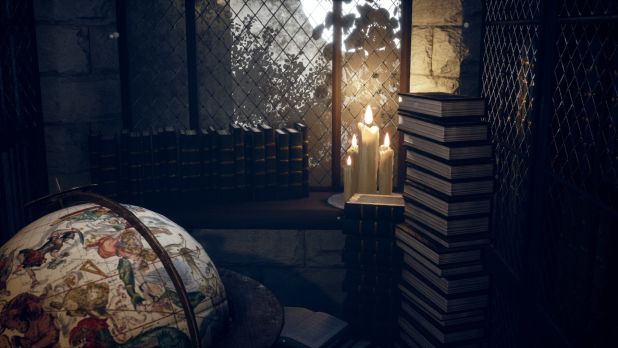 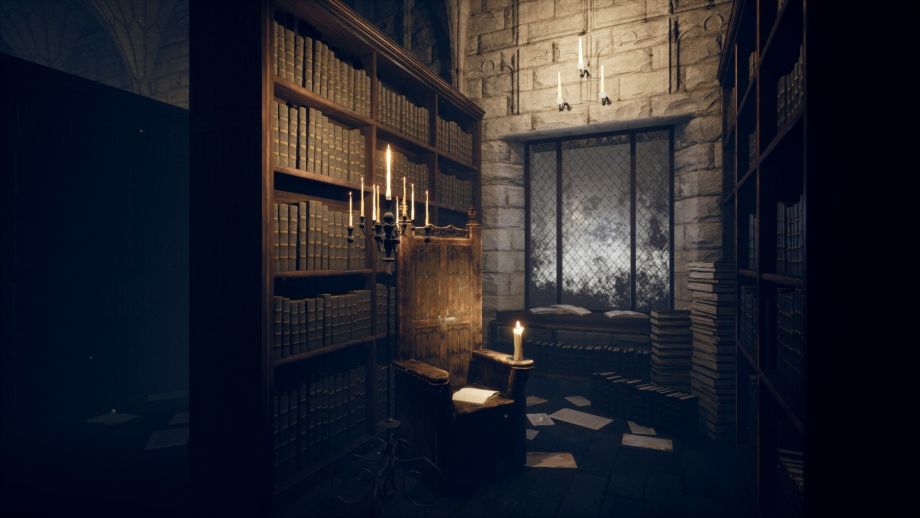 A friend of mine recommended CGMA classes to me last year during the IFCC festival in Zagreb. I have been doing Props and Environment Assets in 3D for some time now and wanted to take my art to the next level. I knew I wanted to specialize in Environment art and Level design so when I found the UE4 Modular Environments class by Clinton Crumpler I thought it to be the best option. Before that, I had just been starting to use the incredible Unreal Engine 4 and thought this course could also help me improve my UE4 knowledge and skills. But most importantly I wanted to make a game ready scene that could be used in a game level and go through all of the production phases needed to achieve such a goal. With this project, I wanted to create a coherent environment that is intriguing and mystical but also explorable and could be fun to play. 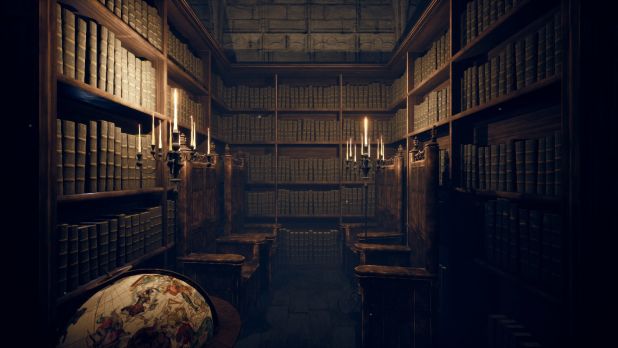 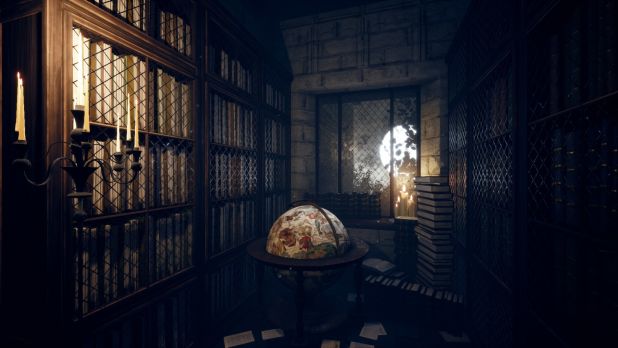 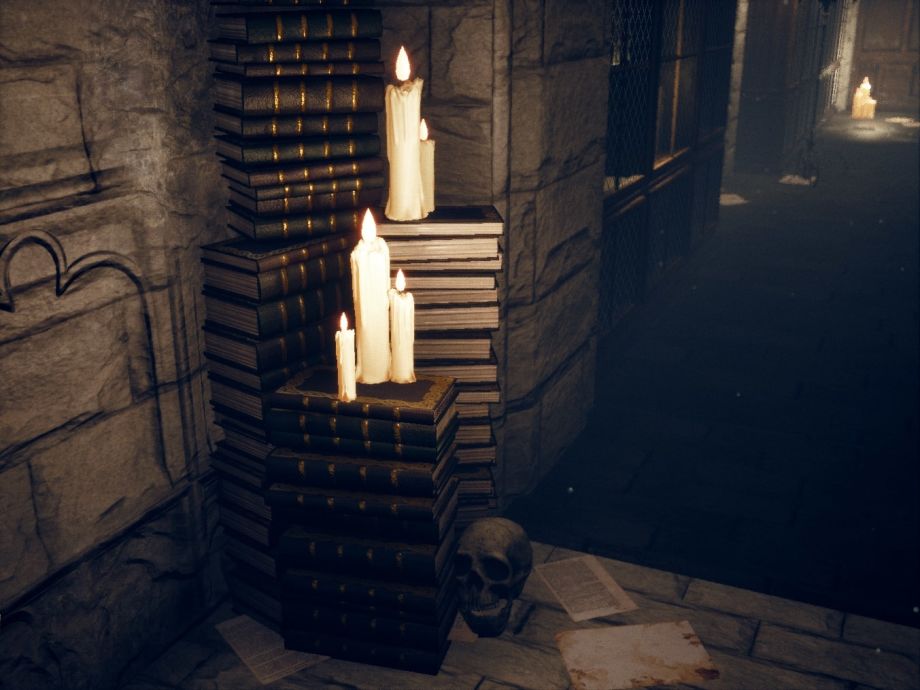 At the time I was playing Bloodborne feverishly on PS4. It is a really inspiring and meticulously crafted game. The environment art and levels are beyond exceptional. I have always had a thing for libraries, so naturally, the Cainhurst area really stuck with me, especially its grandiose library. I knew I wanted to do something with the elements of gothic, medieval, and fantasy. We had a defined time frame in which the scene should be produced so I opted for a smaller scene which could be completed in a few months. 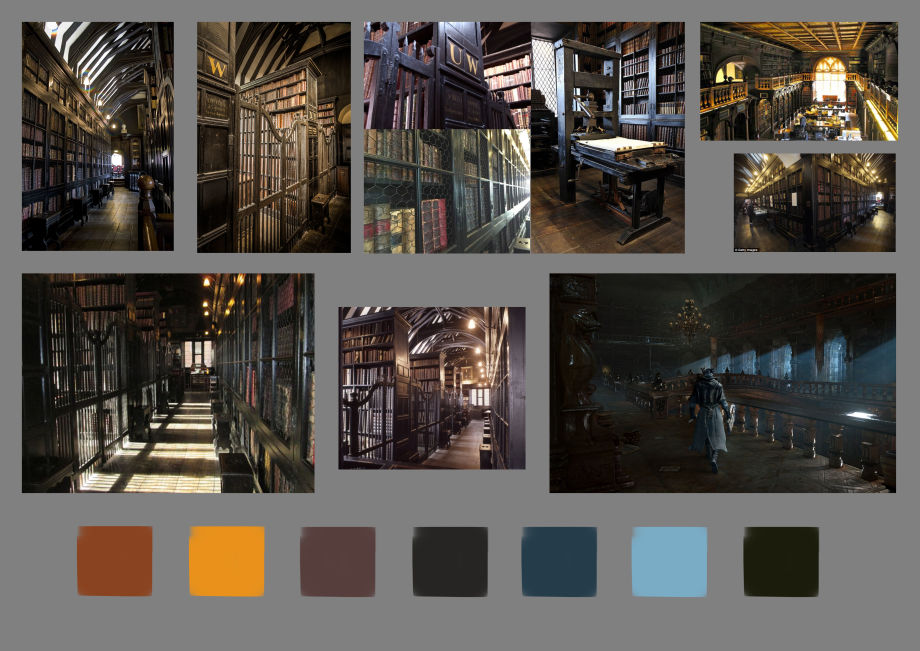 I started by collecting images and references for the project, looking for anything ranging from gothic and medieval architecture to video games with fantasy and medieval atmosphere and design. I stumbled upon a small medieval library in Manchester – the Chetham’s library – which seemed perfect for the job. It has been preserved almost intact since the time it was built and had a dark and gloomy gothic vibe about it. Further research led me to a lot of other pieces of English Gothic architecture which I later used for some of the details in the scene. I used the Manchester library as the basis of the scene layout but added some elements and details from other examples I found, like the Gloucester cloister and the Oxford college hallways. I started making a blockout with some basic meshes just to get a feel for space. After a few iterations, I was satisfied with the layout and the scene I would be working on. The final layout was a combination of the real Manchester library with the addition of some custom spaces from various inspirations. 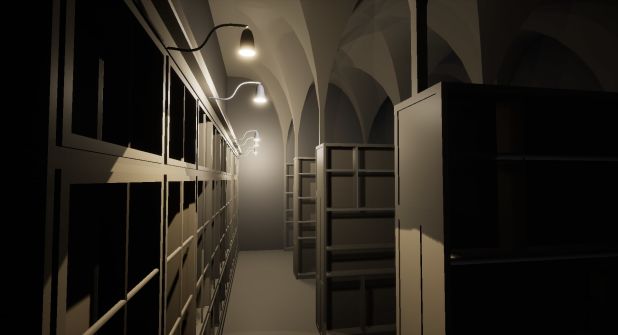 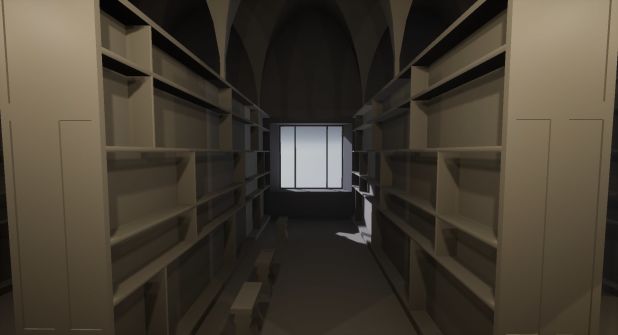 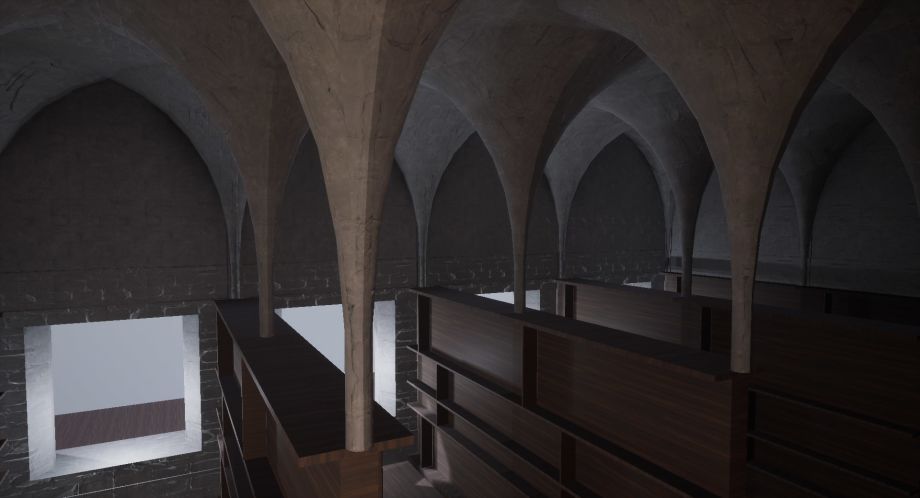 One of the first tasks I had concerning the library was breaking down the interior into sizeable modules. I went through all the images of the Manchester library I could find on the internet, also using archive footage and several documentaries online to see a video walk through the interior. Video footage helps even better to see and feel the chunks, nooks, and crannies of an architectural space that you just can not see in one image. I listed and defined all of the possible modules, their respective materials, and details. This whole process was backed up with paying attention to gothic architecture references. Besides the modules that come directly from the Manchester library, I also used some pieces from other examples of English Gothic architecture, using vaults, corners and some window details from other period pieces.

This was the first time for me, making gothic architecture and ornaments for detailed models. I started by collecting a lot of old architectural illustrations depicting gothic details and even construction references. This way I was able to mimic the process it would take to make the arches and vaults in real life. Using the same mathematical principles and going through the same steps you would take to make them in physical form I achieved it in the digital medium.

The key feature of all the modules was to make them reusable in different situations, being able to rehash them in any way and still get a decent gothic library level. 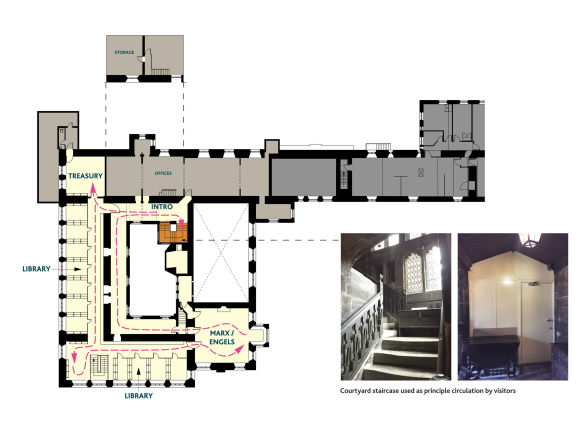 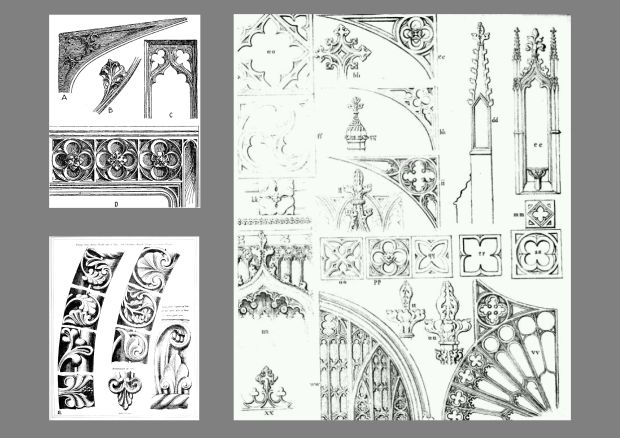 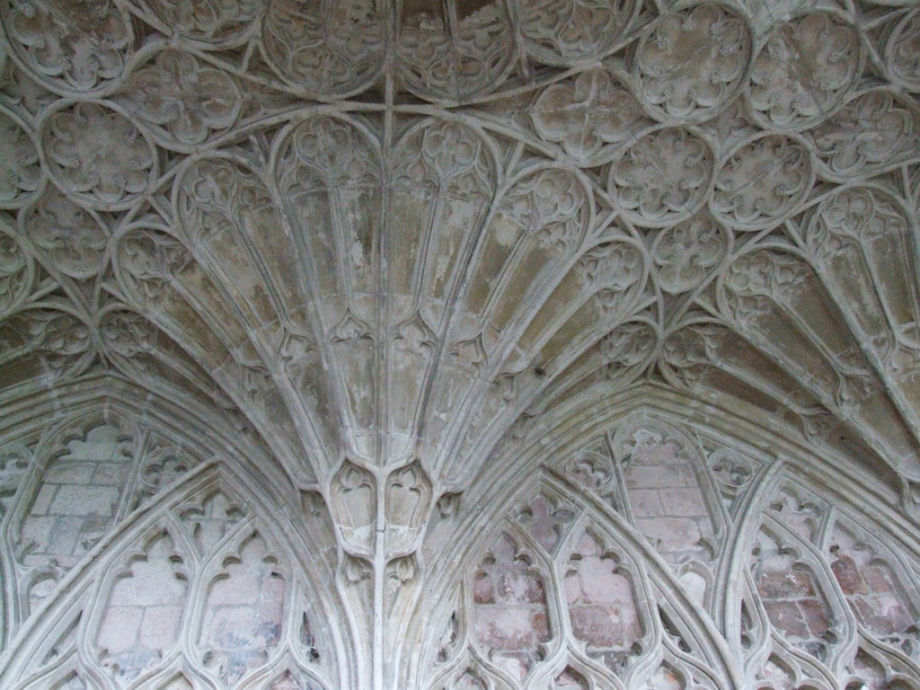 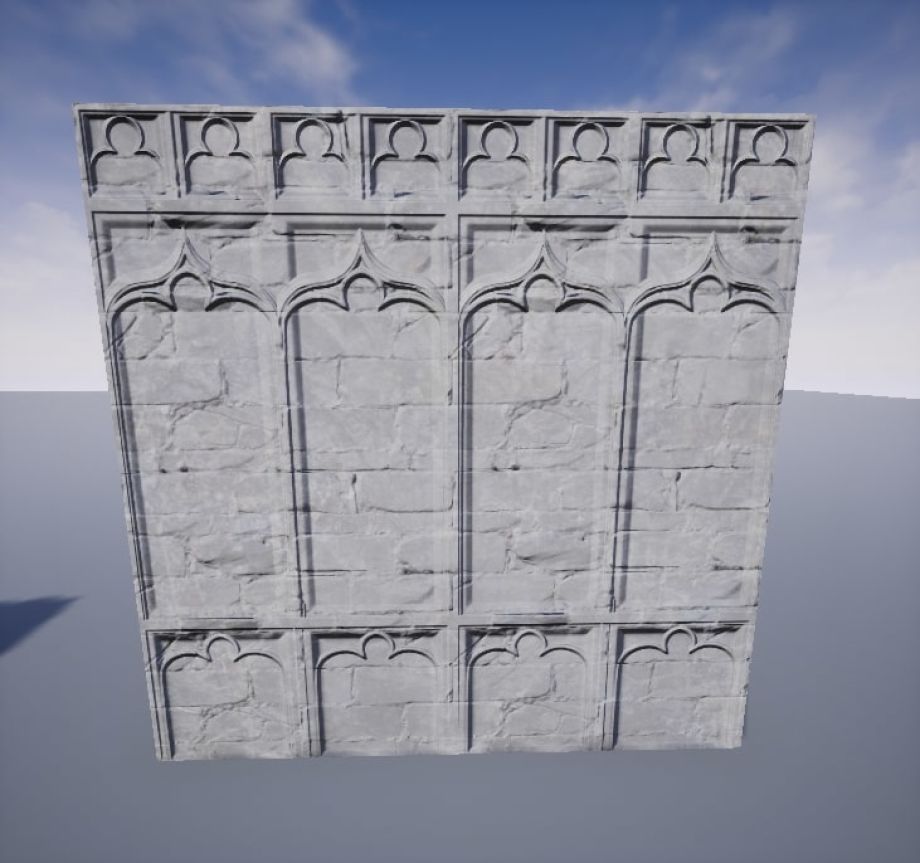 The meshes and asset packs were determined by the aforementioned reference list. The assets were divided into several groups: modular assets, unique assets, and hybrid assets. The modular assets had shared textures and were generally lighter on the poly count. The unique assets were all of the little details like the books, candles, chairs and so on that had a separate texture set and a very simple material setup. The hybrid assets are something in between the two previous types, having joined textures but being more polygon heavy. Those were mostly the trim sheets used around the environment. Most time was put into unique assets simply because they required most of the technical work – making a low-poly, then a high-poly asset, combining them in baked textures and placing them in the engine. Biggest challenges surrounding the import of said assets were preparing them beforehand. Making sure the UVs were correct and not overlapping, the lightmaps that the Unreal engine creates were OK, and that the mesh hasn’t got too many polygons. 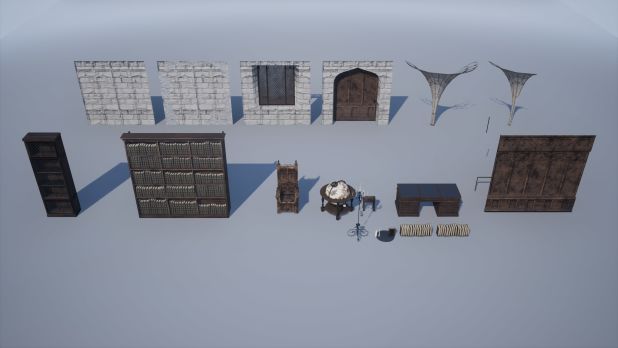 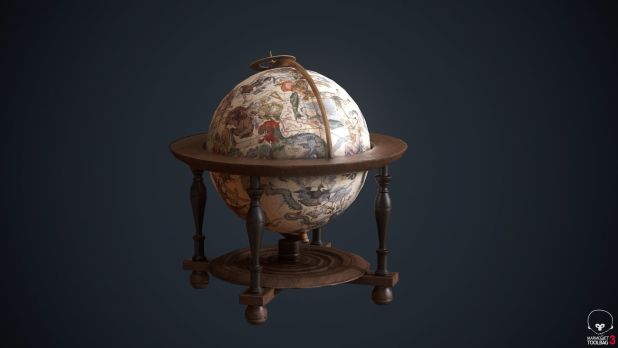 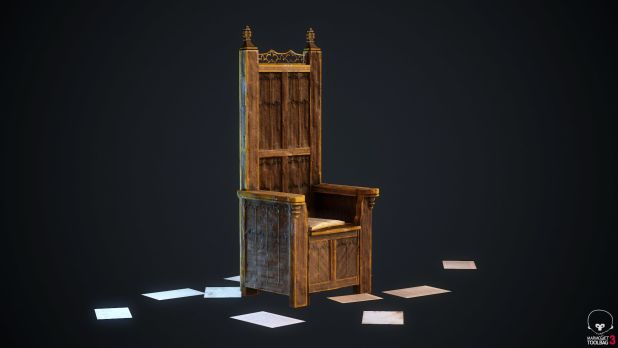 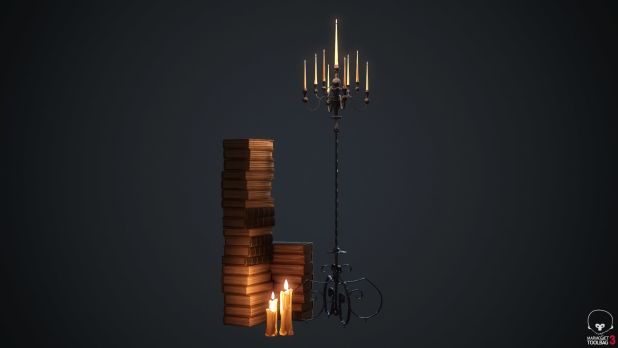 Since the planning phase, I wanted to make the books procedurally. Not only would it make the book placement more interesting and organical, but it gave me a chance to learn more about the Unreal’s Blueprints. For inspiration, I looked at various UE4 projects that did the same thing with books and similar props. In the end, I was most influenced by Aiko Shinohara’s Oxford Library project in UE4 which was also a stylistic inspiration from the beginning. The books are actually randomized from one single mesh that had 2 to 3 texture variations mapped in the material editor. It was essential to get the size, the tilt, the color variation and the length of the book row defined by the single blueprint. This way I could place a stack of books anywhere in the scene and then adjust them to the needed situation. The result was getting a randomized row of books for the various shelves in the library but it also gave me a possibility to place them freely around the place – giving way to a more organic scene which could feel as if it was used by the old librarians. 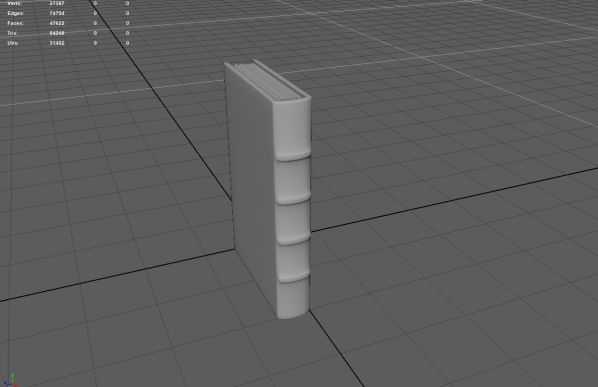 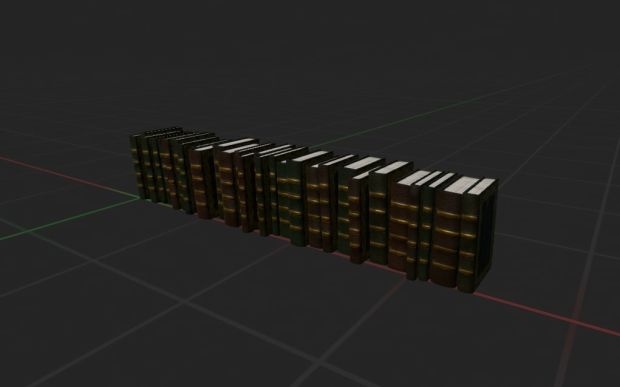 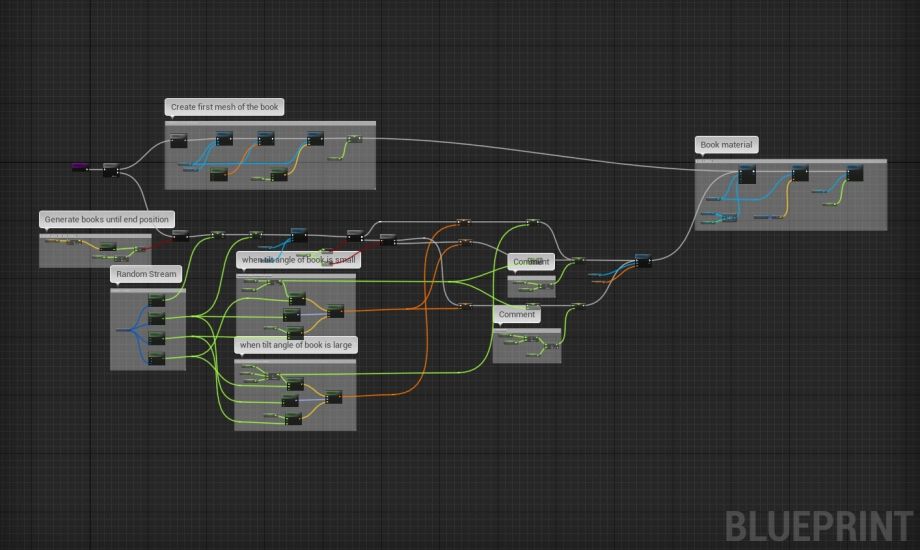 Lighting in the scene went through a lot of iterations. I knew from the start that I wanted the place to be dark and gloomy but to also have highlights of candlelight that catch the viewers attention. First came a light blue directional light which was to mimic the moonlight. The interior was made very dark from the start with individual point light being added gradually to liven up the scene. The point lights are combined with several light meshes. The individual candles, candelabra and wall lights all got a light source of its own in their own separate blueprints. This time I used blueprints to have more control over the whole scene, changing simultaneously the properties of light in all of the linked assets. The light assets were then scattered around the scene to not only highlight the architecture but also to get a sense of place being used. The candles were completely made in polygons, with the fire being animated and textured through the material editor. The flame flickering was achieved using the vertex world displacement with mathematical nodes in the editor like a sine wave and the panner. To finish things up, volumetric fog and dust particles were added to give the place the feel of an old dusty library. 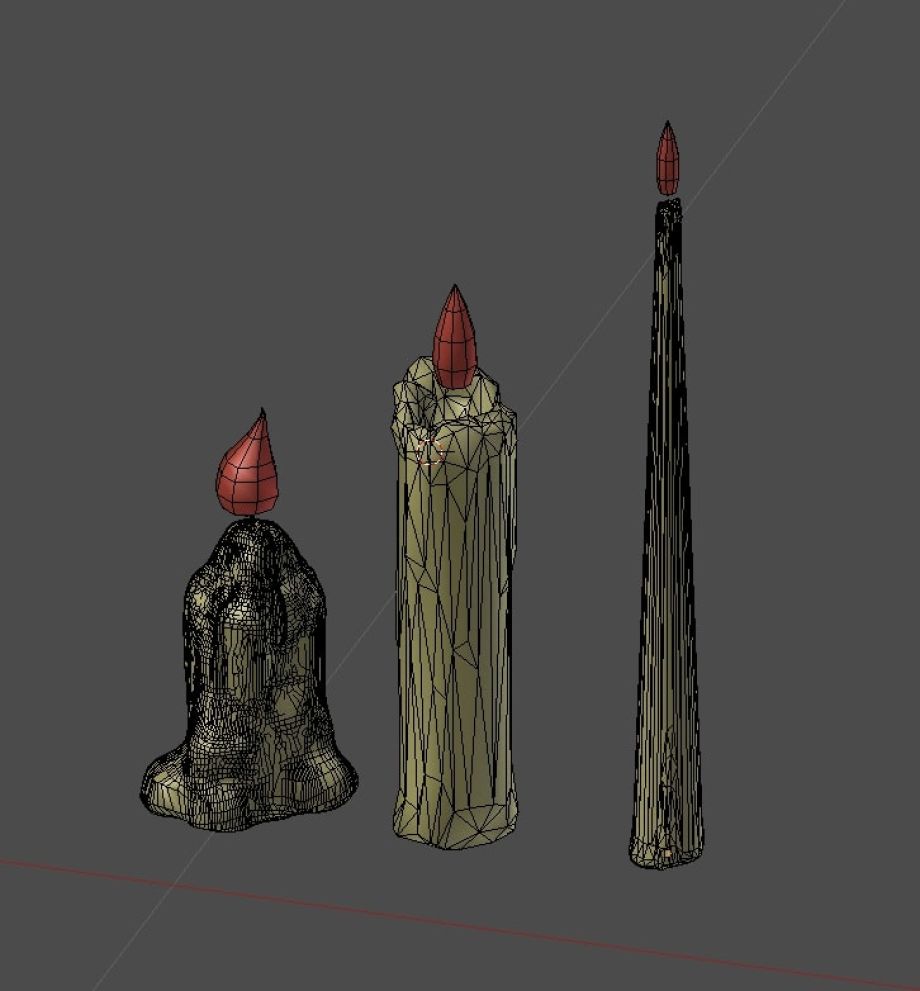 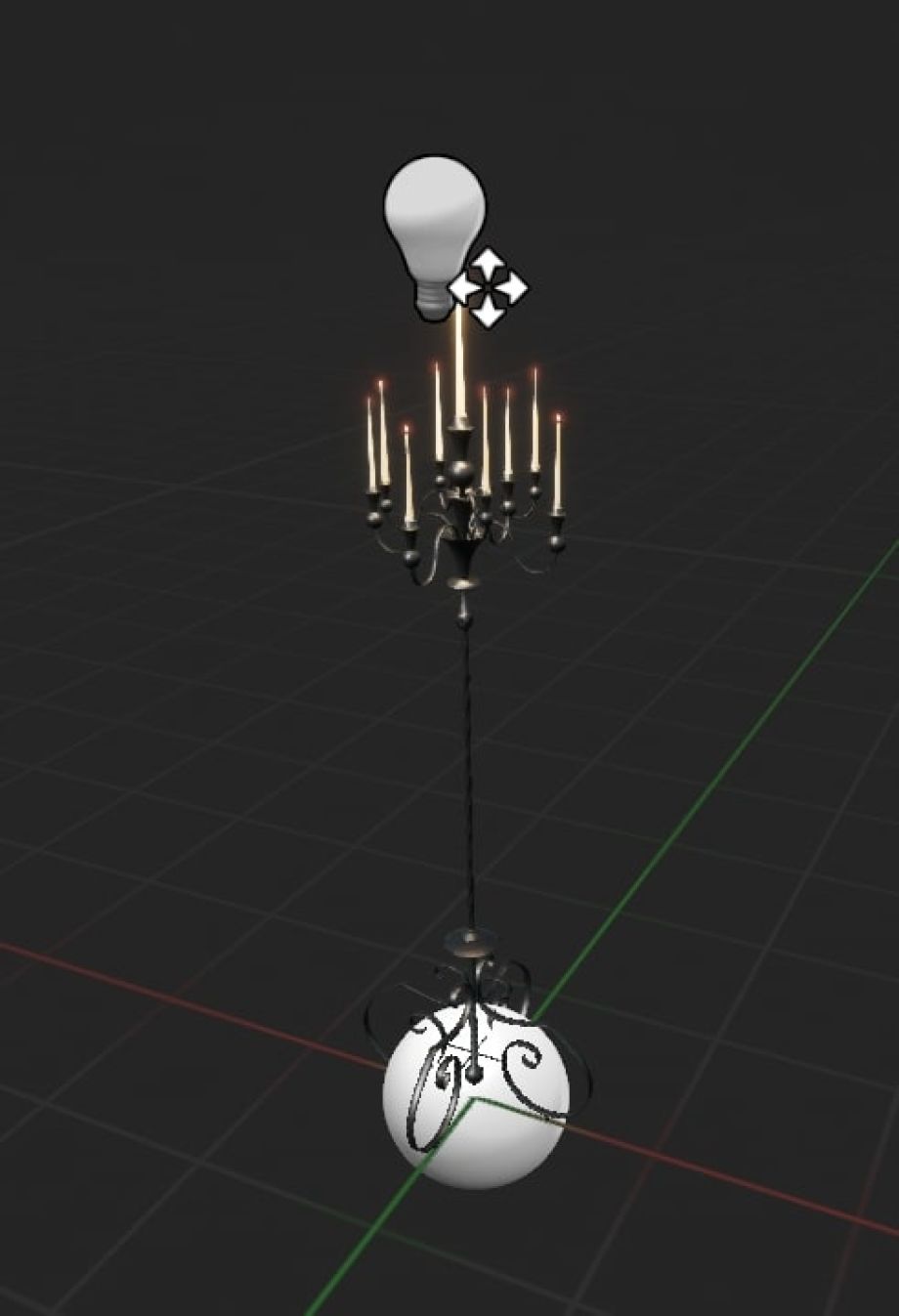 This course has been a great experience for me. Not only did I get a chance to learn from the industry professional like Clinton Crumpler, but also to communicate with other artists during the course, get their feedback and share experiences and knowledge. I am glad I participated because of all the new stuff I learned concerning the level and environment production through all of the phases – from start to finish. I am proud to start my portfolio with this piece and hope to make it one of many in the upcoming years.