Lauren McKenzie shared the details behind her environment art and vegetation practices that she had during CGMA course Vegetation and Plants for Games.

Lauren McKenzie shared the details behind her environment art and vegetation practices that she had during CGMA course Vegetation and Plants for Games led by Jeremy Huxley. 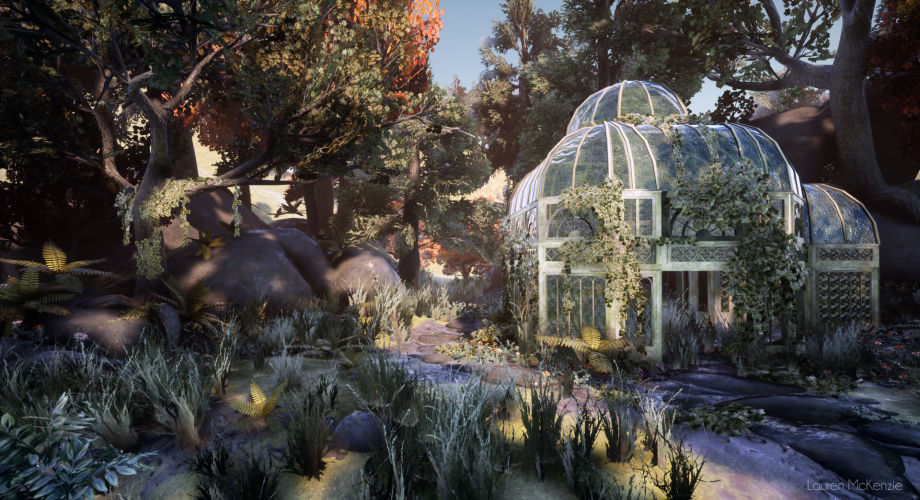 I’m Lauren McKenzie, a 3D environment artist at Zenimax Online Studios working on The Elder Scrolls Online. I actually went to college at Miami University in Ohio. My original plan was to be an English major, but I took a 3D course on a whim and fell in love with the process. My mom was not thrilled when I changed my major out of nowhere, but just a few years (and internships) later and I ended up here!

I was super curious to see the workflow that Jeremy Huxley and his team used at Naughty Dog for their environment art. A lot of it was the same, but much of it was different as well. I went in with the goal of learning new ways to approach problems, specifically in ZBrush and Designer, and I definitely feel like that was achieved. I’ve adapted much of his workflow into my own, and I think that sort of informational collaboration has definitely made me a better artist. 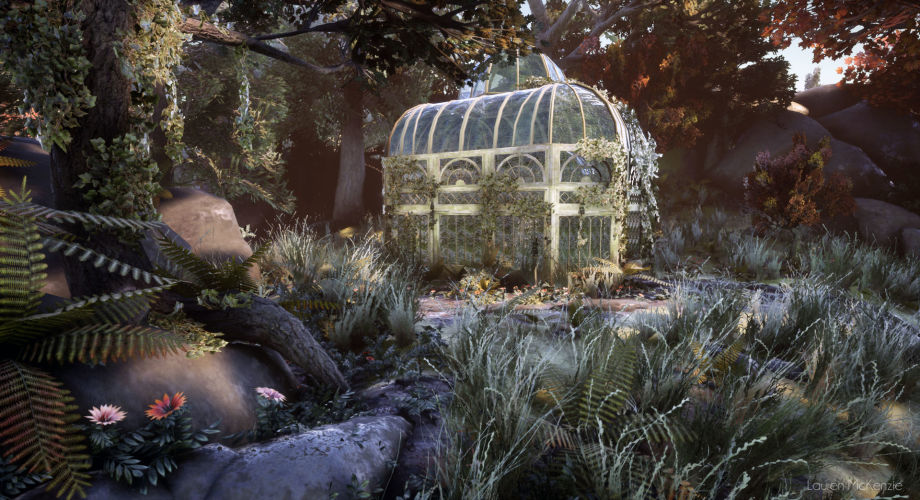 The blockout stage was rough, honestly. One of my biggest flaws is that I hate the planning stage. I always want to jump right in and start adding the fun, pretty details. You can tell even from my very first blockout that I was starting to get ahead of myself! I knew from the start that I wanted to have some sort of ruins in my scene, I love the contrast of organic vs man-made materials. The first thing I did was try to make a modular set to use for building the greenhouse. I had to force myself to slow down and really plan out the scene. I made both a reference guide and a style guide to try to keep myself on track. I tried to work on leading the viewer’s eye through the scene. Pops of color, the pointed rocks that move the eye, swoops of branches and ivy that direct you to my focal point. The scene itself is actually pretty small, so I needed to work to fake detail in the background to make it feel larger. I tested everything in Unreal from the beginning, which was great for visualizing but also a bit of a struggle because I’m not terribly familiar with Unreal’s interface. 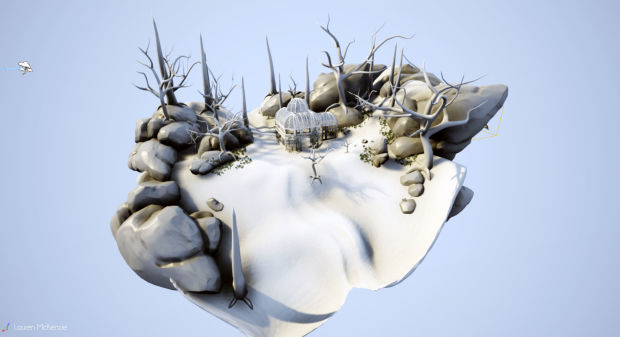 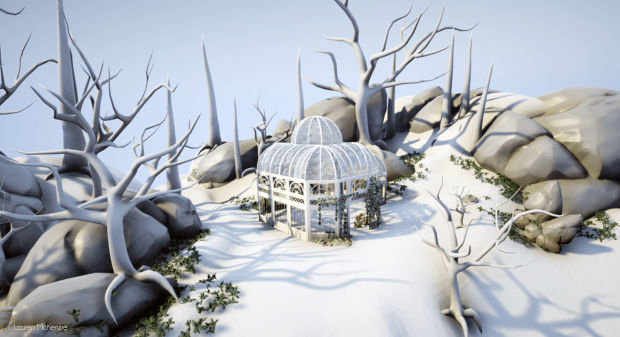 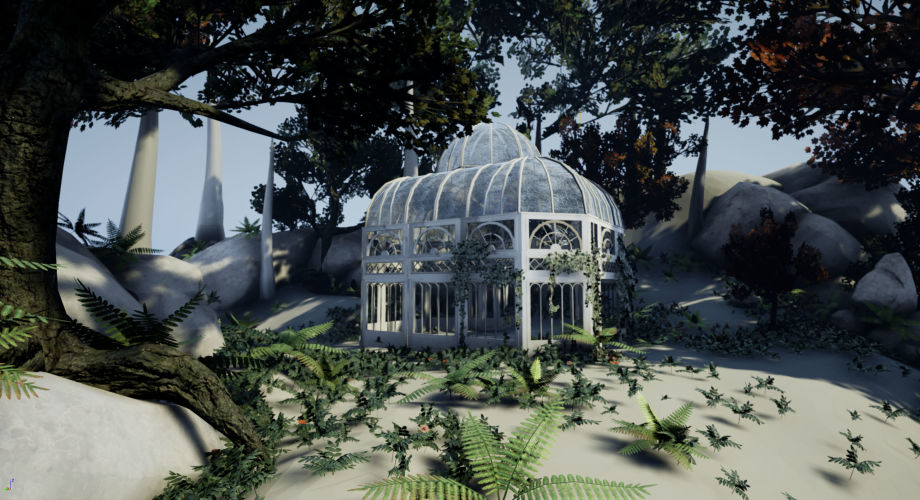 Before this class, I had never actually sculpted plants in ZBrush. I remember thinking “this is dumb, it would be so much faster to take a picture of a plant and cut it out to make cards”. I thought I was wasting my time at first. But once I started to get into it, it was impossible to deny how effective it was. While the texture may not be 100% accurate to a plant in real life, having the freedom to make quick changes and have excellent normal maps made the method very strong. Sculpting the plants took a while, but the method added so much more depth to the cards than any height map I could’ve painted by hand. Almost every single plant in the scene was hand placed, I was really worried about not overloading any areas with too much or not enough of one color. It took a while, but I tend to be kind of meticulous about it. 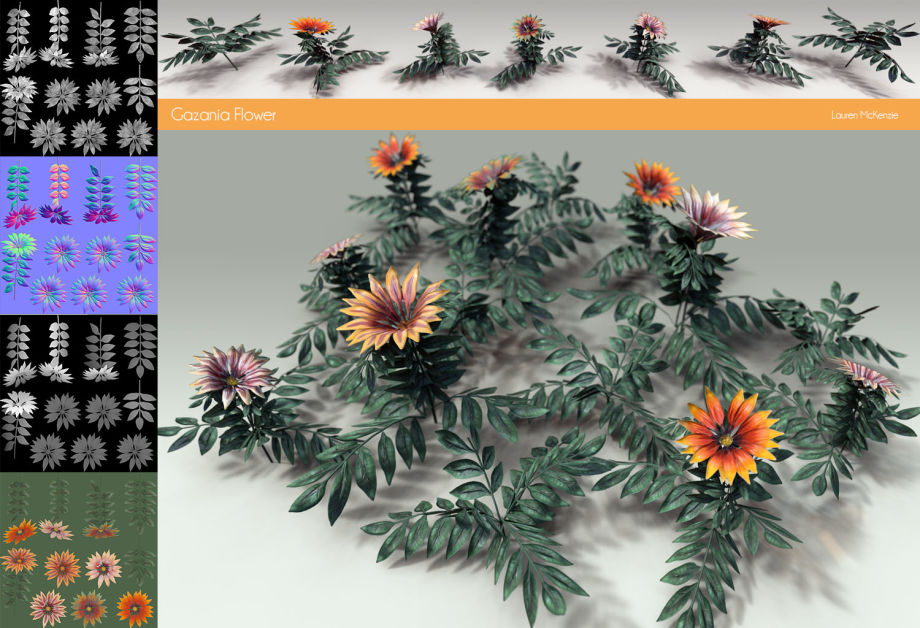 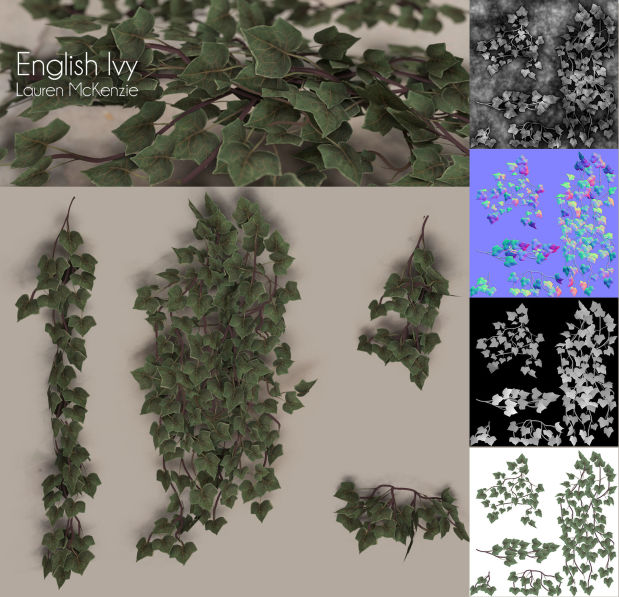 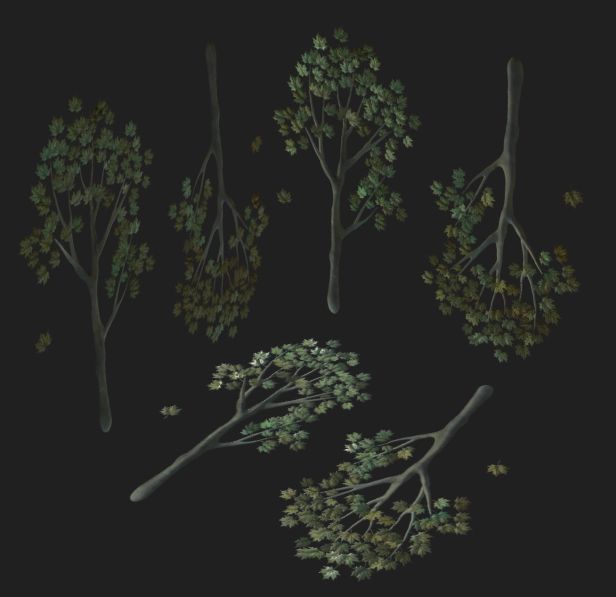 The texturing process varied a lot depending on what asset I was making. The greenhouse pieces were textured in Photoshop including the sort of mossy/dirty white paint and the glass. They were tiling textures to add more versatility, though it didn’t end up being super necessary for this scene. The rocks and bark were made in Substance Designer, all of the vegetation was actually textured almost entirely with Polypaint. In my usual work, I tend to stick to Substance Painter, but I wanted to challenge myself to try other options and see what sorts of effects I could get.

Lighting was one of the topics I actually struggled the most with. The presentation is such a huge deal, and I was really unsure how to go about it in Unreal. I watched loads of tutorials on Youtube even after going through all of Jeremy’s lessons, and I’m still not super sure about it. The lighting changes pretty drastically throughout the renders. I wanted to give it a warm feel without it seeming too much like it was under an Instagram filter, and I also didn’t want to sacrifice too much detail because of the lighting. I spent a LONG time in the post-process tabs. The lighting is primarily done with directional light, playing a lot with the bloom and depth of field. I wanted to avoid using point lights or others as much as possible, just because it didn’t seem at all natural for the scene. I did have a few under some of the trees, though, casting a subtle blue light to even out some of the corners that were too dark.

One of the best things that I discovered about Unreal was that I was able to make an object invisible and still allow it to cast shadows. Once I figured that out, I placed invisible canopy cards in the sky to cast more shadows on the scene and give it the sense of having more foliage just out of view of the camera. 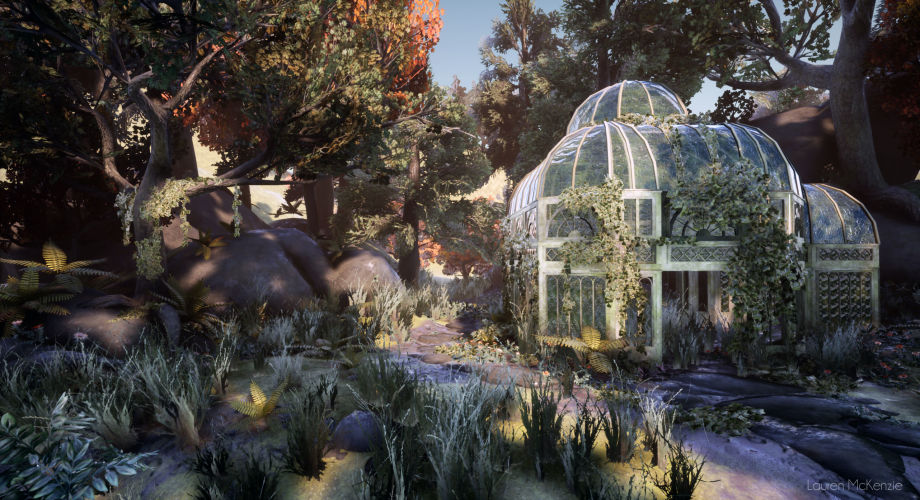 The Vegetation and Plants for Games class was extremely useful and informative to me. I felt like I was able to expand upon my skill set and push past my limits in a space where I was free to experiment. The biggest challenge for me was definitely the time limit – there is a LOT to do in only 6 weeks, but it felt hugely rewarding for me to do. I kept finding myself fixating on tiny details and had to find the strength to tear myself away and focus on the larger beats first or risk running out of time. I think it was a huge lesson in prioritizing my assets. I’m definitely planning on taking more CGMA classes in the future – there’s still so much to learn!