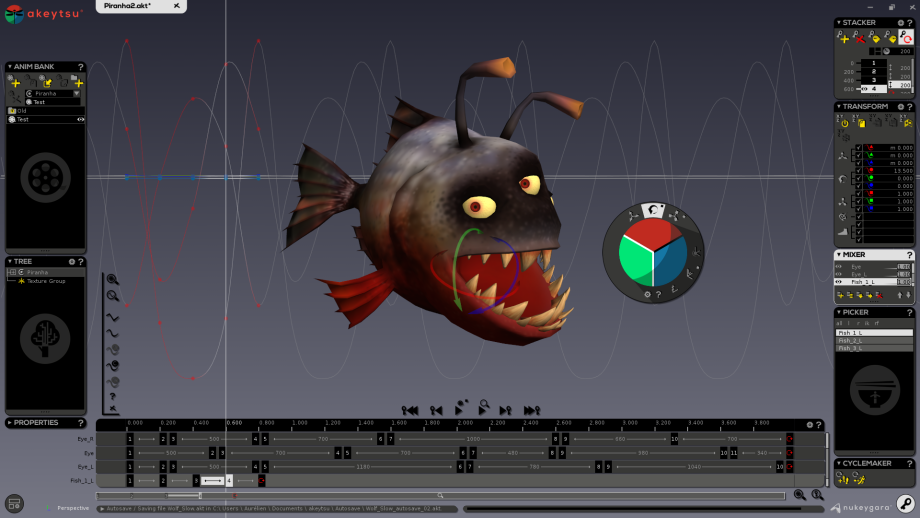 Both of us, the two founders [Aurélien Charrier and Yannick Rousseau], came from the Games market, one as a lead animator and the other one as a R&D developer.

I graduated from Les Gobelins with a degree in traditional 2D animation, but I immediately started working in 3D at Infogrammes. I then worked for more than 10 years at Eden Games. I worked on titles like Alone in the Dark and Kya: Dark Lineage. It was during this period of games development that Yannick and I thought it would be worth creating focused software specifically for animators. This is why we say Akeytsu is designed by animators, for animators.

Standard processes are powerful, but way too long and complex. Most of the older software was designed about 20 years ago to handle 3D content, but not necessarily 3D animation. Character animation (and rigging) was added little by little, but without a specific design and smooth integration into the workflow, and without the idea of producing hours and hours of 3D animation needed for creating a game. So, year after year, this software become more and more complex, because they needed to handle all the aspects of the workflow, like modeling, texturing, VFX everything, and it led to the current situation: the technical side almost took over the artistic side.

It’s like a hamburger, which never stops growing with levels and levels of additional layers of meat, cheese, onions. At the end, the hamburger is so big you can’t eat it anymore without destroying your mouth. We felt we had to stop this, simplify the process, and give back space to the animators.

So, in game studios (like in any other 3D studio) you need to be reactive. You need tools allowing animators to produce/change things fast. If an executive tells you “I changed my mind and want this character have this look instead of this one,” you must be able to update the character quickly. In a regular process, updating a character is not an easy task, as the character carries lots of nodes around (a huge control rig layer with IK skeleton, FK skeleton, controls for each of them, constraints, etc.). It’s a heavy process we resolved in Akeytsu, as our “light rig” system allows us to have a unique skeleton driving FK and IK, without a “control rig structure,” as we click directly on the skinned mesh to handle our character. So it makes the creation process – as well as the modification process – fast and easy. In Akeytsu, you can modify your rig in a few steps and continue to animate. On top of that, we were tired of having to wait on rigging for days and days, while for simple animation like in most of the games, you don’t need this heavy rigging phase to be able to animate your creatures with no compromise in the quality of the animation. This is why we started from scratch. 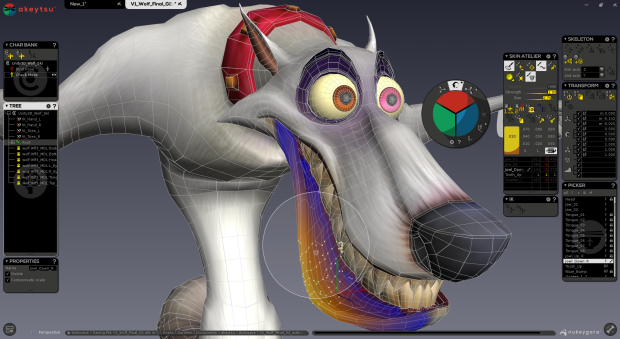 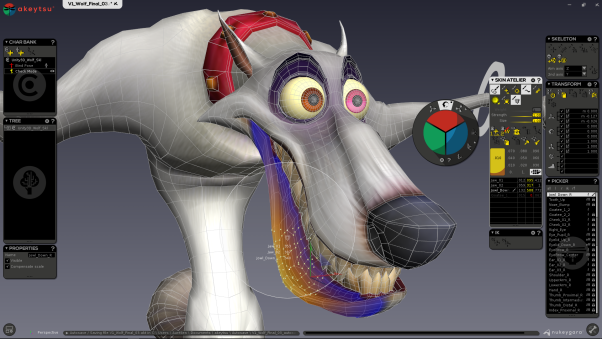 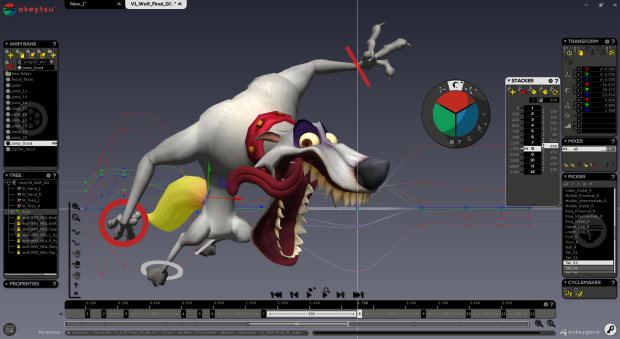 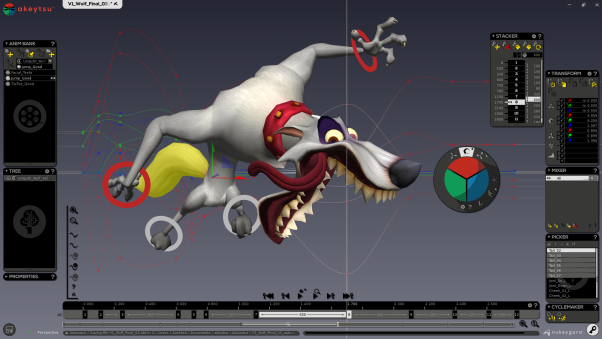 Animation is a difficult job, and animators are artists who just want to focus on the movement he or she will draw for their character. The animator should not struggle with technical aspects.

They want to make the best poses and want to focus only on these tasks. That is what we offer to the animators with Akeytsu: a light product, which opens fast and is designed for animators. Akeytsu is designed for their needs and tasks specifically, with the most comfortable UI possible.

Everything has been thought out and developed for resolving the challenges animators face in their daily creation and this is major when they have a huge volume of 3D animation to be produced for their games. And of course, as the product is light and focused, it’s faster to learn and faster to handle. And we really think our mindset was right, as we received so many feedbacks talking specifically about the joy and the fun the animators receive when working in Akeytsu, and this is one of our biggest points of pride above any others. Reading user’s feedbacks such as “animating is fun again,” or “it actually makes skinning fun!” (Both are quotes from users.)

Usually, rigging a character does take many days. With the character example I showed you during the briefing, I wanted to explain how fast you can have a model “ready to be animated” in Akeytsu. So of course, the step of positioning your half- skeleton takes a little time, and then if you want to have a really precise and detailed skinning you will have to spend a little more time (comparing of when I showed you the process during my demo) with our Duo Skin process (back and forth between rigid pre skinning and final smooth skinning). 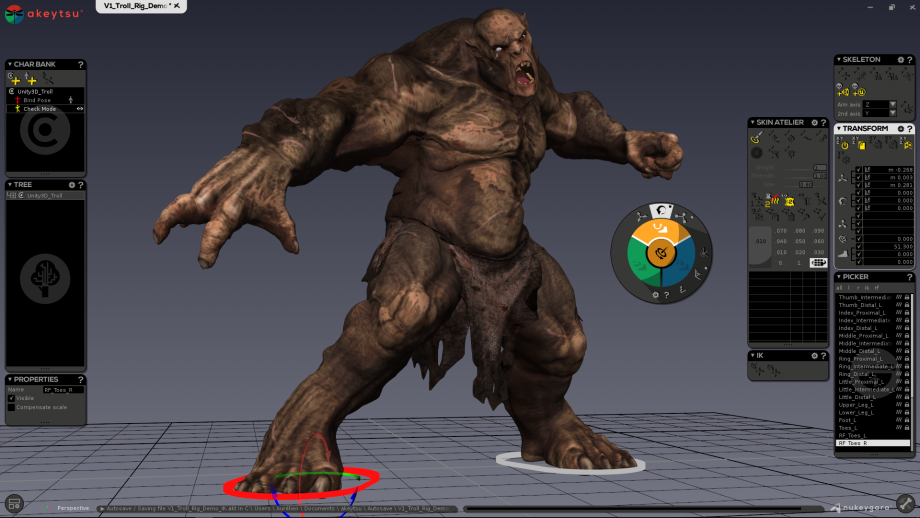 But once this is done, just few more clicks to add IKs and Reverse Foots, and you are ready to animate. With the complexity of standard rigging and posing that are currently available on the market, there’s nothing comparable.

The Spinner makes it so the animator is not constrained or obliged to constantly turn the camera in order to grab the desired axis and perform the joint transformations. It actually frees the artist, and helps them focus on the movement they wish to give to their character. 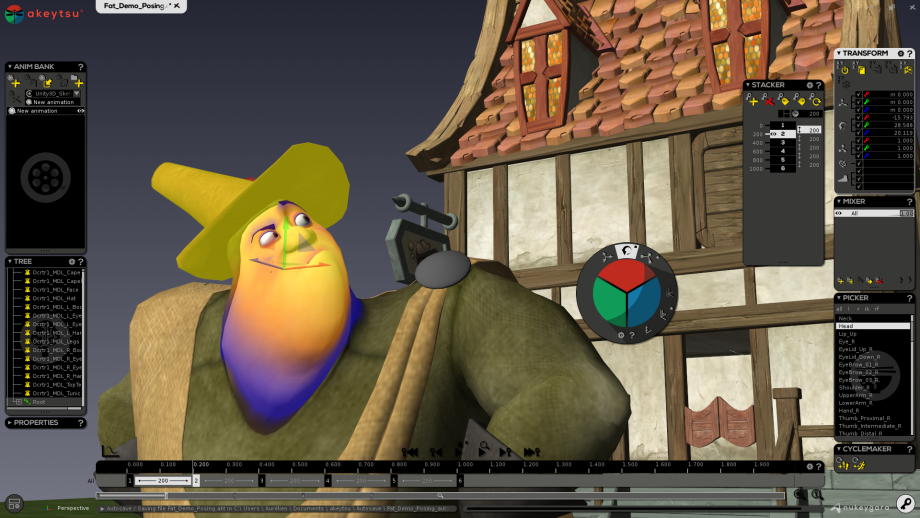 In Akeytsu, you place the camera at the point of view in order to make the pose you want, then you place your Spinner not far from the Character – in your visual field but without looking at the spinner. The animator looks at the motion they want to create, and places their mouse above the spinner to make some up/down gestures to handle X, Y and Z transformations. On top, aside X, Y and Z plus Move Rotate and Scale, the Spinner handles IKs channels too. It’s not only a 2D widget but a core part of Akeytsu, planned to handle more and more features in the future.

A major point of Akeytsu concerns its “keyframing centric” philosophy.

Akeytsu was designed and developed primarily as a real keyframing animation software. Of course, it will handle mocap animation in the future, but the main goal was to “return” to animation fundamentals: bring back the joy/fun of animating by using keyframes mainly to animate. 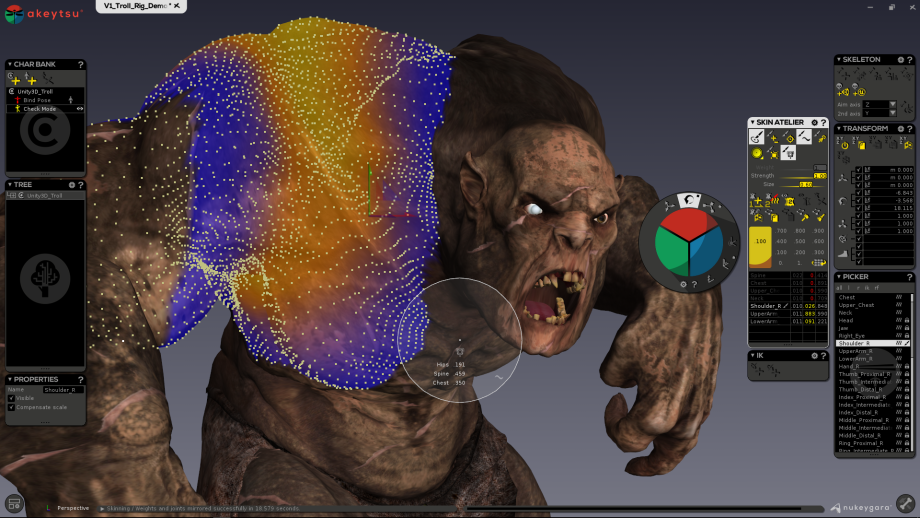 And concerning it, it is fair to say that the Stacker, our industry-first vertical keyframe editor, was designed to bring the best of traditional 2D animation into the 3D context. The Stacker is inspired from X-sheet (Exposure Sheet) and links keyframes with their relative timings Adding a key is adding time, removing a key is removing time, and the other way around as you can add timing for each keys and easily display multiples keys in a very compact or thin space. The Timebar works in a more “standard” way.

The good thing is that both the Stacker and Timebar are complementary and work together in Akeytsu, so users of both process benefit, and this helps to facilitate 3D keyframing animation.

Cyclemaker works only for cycles, meaning that it will significantly boost the creation of walk, run, and any other cycle motion animations. As simple as this: It’s meant to produce high volume of cycle animation which you often need in games creation.

The way we have designed it was to optimize as much of the process as possible. So it ends up as the following: the first feature of our cyclemaker is a tool that will automatically generate the second foot step of your walk animation (you manually produce only the first foot step keyframes), while the second feature of our cyclemaker allows the artist to update a full side of character motion to the other side (ex: you modify your right leg and arm for your walk cycle, and the tool will automatically shift this modification to the left leg and arm). It makes it extremely fast.

While Akeytsu targets mostly Indie productions (not only games, but also episodic TV, such as pre-school shows or web series), it can already handle much more complex models than the low poly animations that we see in games. And yes, it does already handle not only bipeds and quadrupeds – or almost any type of lifelike characters – but also objects such as lamps, furniture, or other props. 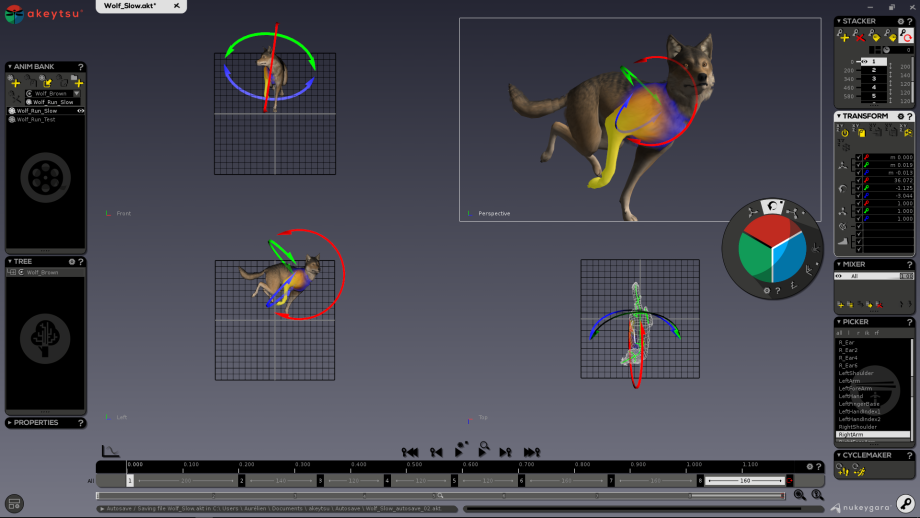 You can animate – and rig – props, creatures, monsters, plants, etc., anything you want. About machines, you can of course animate it, but we do not, as of today, currently have “mechanical” constraints, meaning that with v1.0 the animator needs to handle the constraints manually. Of course, these constraints are part of our roadmap.

Until the release date, we offer early access pricing, which allows users to purchase Akeytsu at less than 50% of what it will be once we release Akeytsu v1.0.

We put this pricing model in place when we released on our first beta version, so people who would encourage us by buying our beta version, would get the v1.0 with no additional cost. It has helped us to get some revenues while developing our v1.0, and also get feedbacks to orient our development and to get a very stable piece of software.

After v1.0 is released in October, the pricing will be as follows: Learn (free for students and teachers and 39$ for academic institutions) Indie (179$) Pro (589$).