Eric Fram, co-founder at Zippy Brain, has used the Monthly Average Revenue Per User (MARPU) for an analysis that compares MARPU for Zippy Brain’s four most successful iOS apps (excluding Earth Day Carol). The apps are Battle for the Birdhouse, Beehive Blast, Fight the Fire, and Helitack. They are all free-to-play.

Eric Fram, co-founder at Zippy Brain, has used the Monthly Average Revenue Per User (MARPU) for an analysis that compares MARPU for Zippy Brain’s four most successful iOS apps (excluding Earth Day Carol). The apps are Battle for the Birdhouse, Beehive Blast, Fight the Fire, and Helitack. They are all free-to-play.

There are many different monetization strategies out there for mobile application developers. Average Revenue Per User (ARPU) is a top metric for the measurement of an apps success. This allows a developer to see if a design is working the way they want it to or not and to calculate acceptable user acquisition costs. For the purposes of this analysis, Eric Fram has used the MARPU.

Here’s the strategies and platforms used for each of the apps: 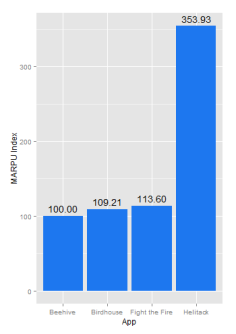 In the above figure, it shows that Beehive Blast was the worst performing app. The best performing app was Helitack. It has been shown that there has been an average of 3.5 times more revenue produced per month by users of Helitack than with users of Beehive Blast. To figure out why Helitack was receiving such high MARPU numbers, Fram made a comparison of MARPU while excluding in-app purchases.When the comparison was made, Helitack did even better with its numbers. This showed that IAP revenue is not a significant part for Helitack (it didn’t do well at getting users to buy IAPs). 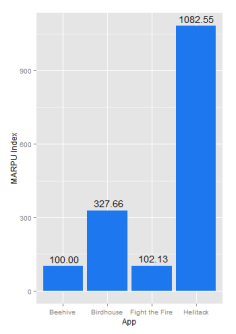 Aggregated MARPU, Comparison of Average Advertising Reveneue Per User Over the Lifetime of Each App © Zippy Brain, 2015

In the above figure, when the information is aggregated Helitack does even better and it leads with a huge space. Each user generated over 10x as much advertising revenue per month on average. Fram’s guess for this is because the users spend much more time playing Helitack, thus generating a lot more impressions on users leading to more revenue.

However, when the usage figures were checked the overall median number of sessions monthly are almost exactly the same for all of the apps. When they are all compared using median length of the sessions, Helitack comes in last place. Fram found out that the way it generates high MARPU numbers with low amounts of tie spent per user in the app, is by AdMob interstitial ads that are shown at the end of every game round. Fram doesn’t promise that AdMob will perform as well for other developers as it did for Zippy Brain, but it is definitely worth trying out.