Ellen Shelley provided a breakdown of her atmospheric scene in UE4 inspired by the amazing Hollow Knight.

Ellen Shelley provided a breakdown of her atmospheric scene in UE4 inspired by the amazing Hollow Knight.

My name is Ellen Shelley and I’m a Lighting / 3D Environment Artist in the games industry. I started my career as a self-taught VR Developer for an architectural company in Brighton, converting their projects into intractable VR levels using the Unreal Engine. It was this experience, accompanied by a self-made, game-art portfolio, that allowed me to progress to Indie and eventually AAA development. Previously I’ve worked as a 3D Artist for Sony London Studio and currently I’m a Lighting Artist for Supermassive Games. 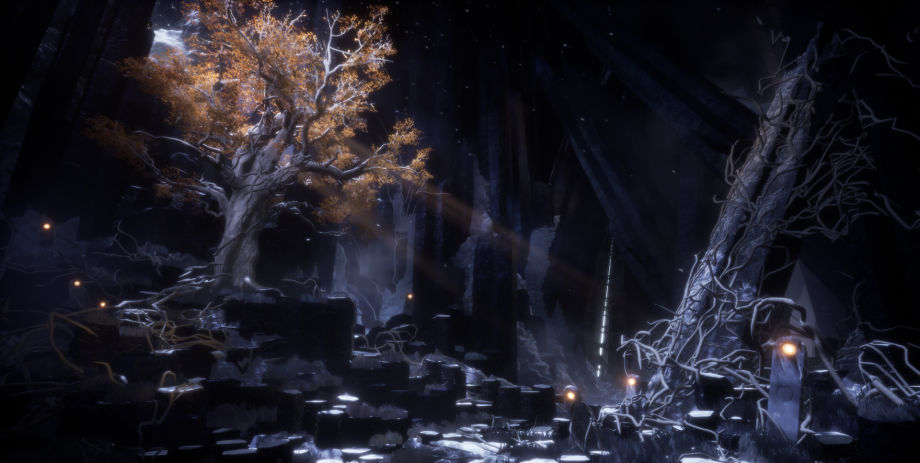 I’ve wanted to complete a dark fantasy scene with a gloomy atmosphere for some time now, even making a small start early last year. Games are a huge source of motivation for me and it was Hollow Knight that inspired me to pick the personal project back up. The game has such strong feelings of solitude and darkness, I had to frequently push myself to replicate these emotions. I achieved this by experimenting with the scale and camera composition – hiding the ceiling and creating areas of large, enclosed space. I found incorporating a tree (an asset people associate with size) highlighted my environment’s sense of presence/scale/grounding.

Hollow Knight was so masterful at keeping its overall tone consistent, it made me realise I had to be a lot stricter with my art direction this time round. 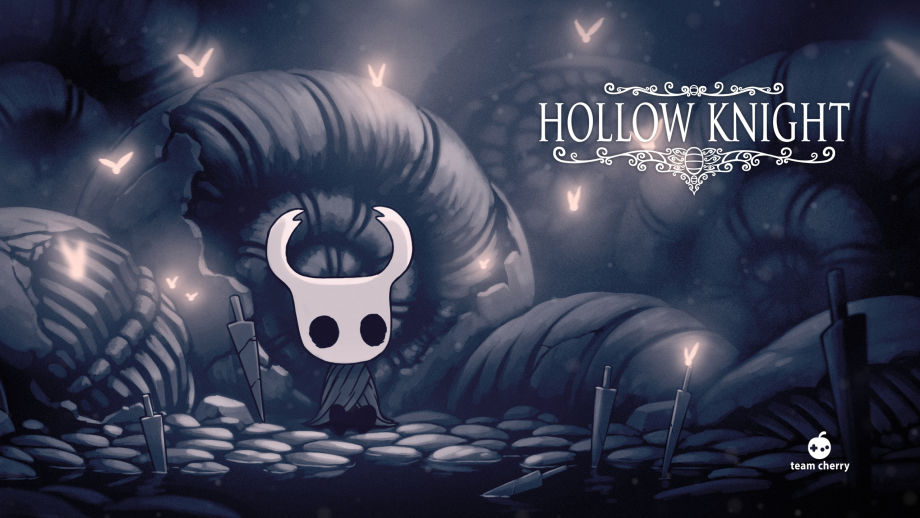 When I’m tackling any environment, big or small, I will usually start by gathering additional references to strengthen my primary idea (especially because my ideas are from imagination). Fantasy-based or not they still consist of real-world elements. For example, for the cave structure, I researched Icelandic rock geology, black Icelandic beaches, and the Devil’s Causeway; a rock formation found in Ireland. Nature is already weird and fantastical that you can pull elements from it and make them your own. 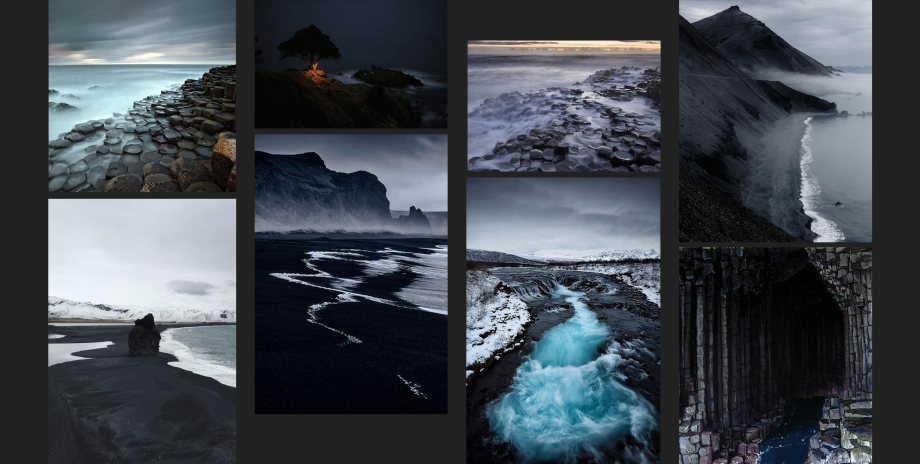 After reference gathering, I begin to break down my scene into its primary assets. For this environment, I knew the cave structure would play a major role in my scene’s creation; requiring huge chunks of rock and ice. Originally I chose to make six rock variations but during the process, I found that narrowing down to three double-sided crystals with a world-aligned material applied (so I could re-scale without the need to re-UV) was an improved idea.

Once key references and a rough plan are established I’ll start the process by going straight into Unreal with basic geometry. Composition and scale always look different in a 3D space (especially when working from a 2D reference). The plan is then to gradually start replacing the block-out with final 3D assets, slowly refining the scene.

[Tip: start modeling the largest assets first and placing them. It’s daunting starting a new scene and I find this helps motivation as progress is more defined. ] 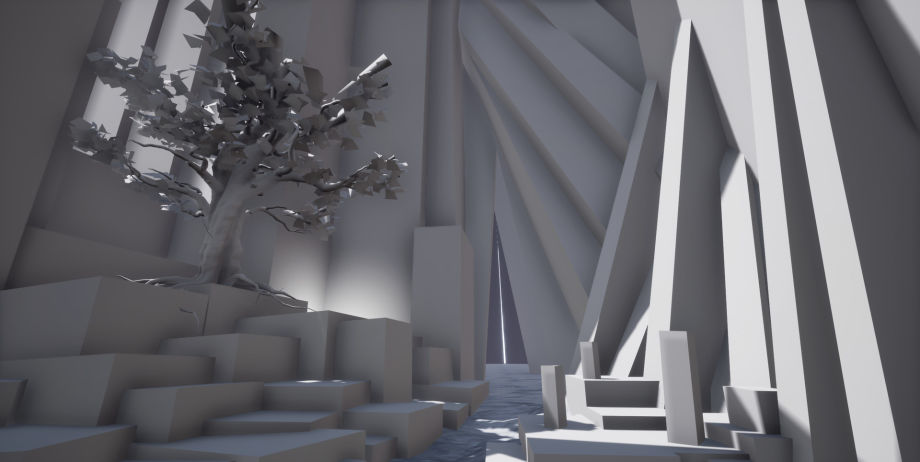 When creating any environment it is advised to establish early on what main hero asset you’d like as your main focus point. I’m a huge fan of nature growing in obscure and hostile places and decided on incorporating the tree as my hero asset. I used the program SpeedTree to create it, editing the exported textures with Material Instances inside Unreal and adding Scalar Parameters for colour, wind speed, and sway. 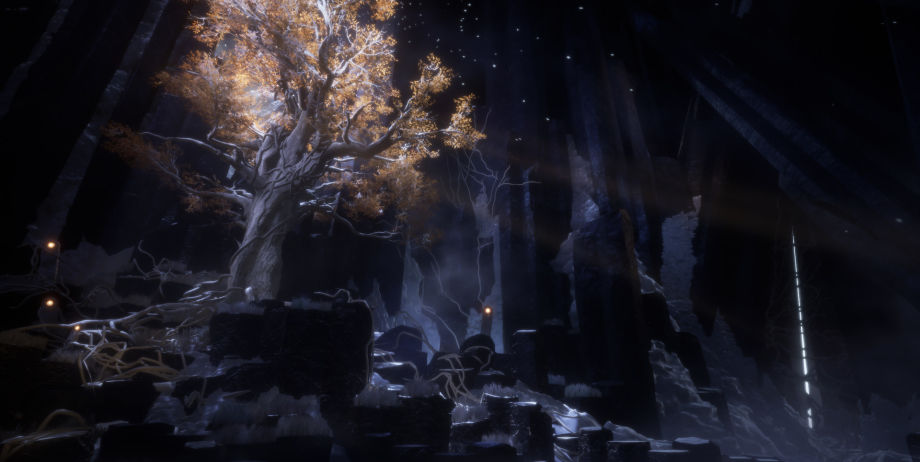 To then embed the tree into the scene involved using large vines that were the same colour as the trunk texture. I used an Unreal Blueprint that allowed Splines to stick and mold to any surface, saving a considerable amount of time (time is invaluable!). 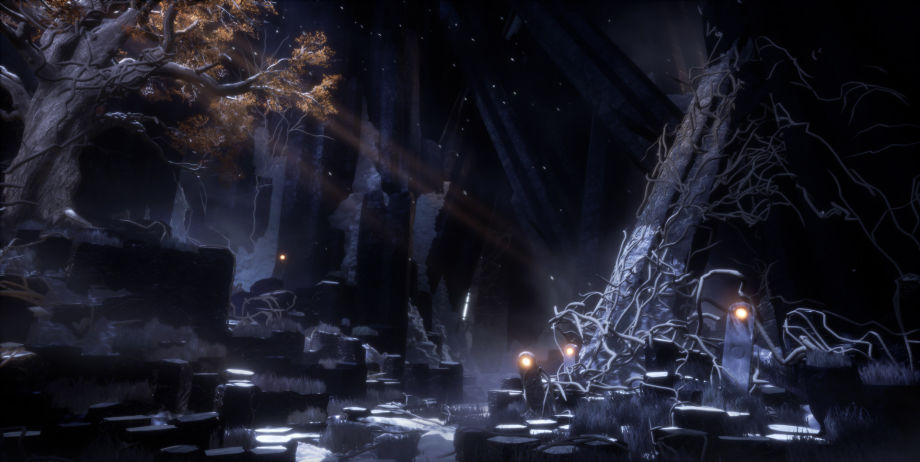 When texturing a large scene it’s important to pick your battles as you can easily burn yourself out; not everything has to be done to close-up inspection. Assets in the background are not going to show the same details as assets up-close. I had plans to create many bespoke rocks with equally bespoke textures. This approach, coupled with the aggressive stretching from re-scaling and inconsistent Texel Density, would have unfolded a small nightmare. A solution was to make a UE4 material that incorporated the World Aligned Texture Node, removing the need to UV and re-UV. I also had bold plans to Vector Paint all the snow by hand, but thankfully opted for a node network that applied it based on the Z axes. 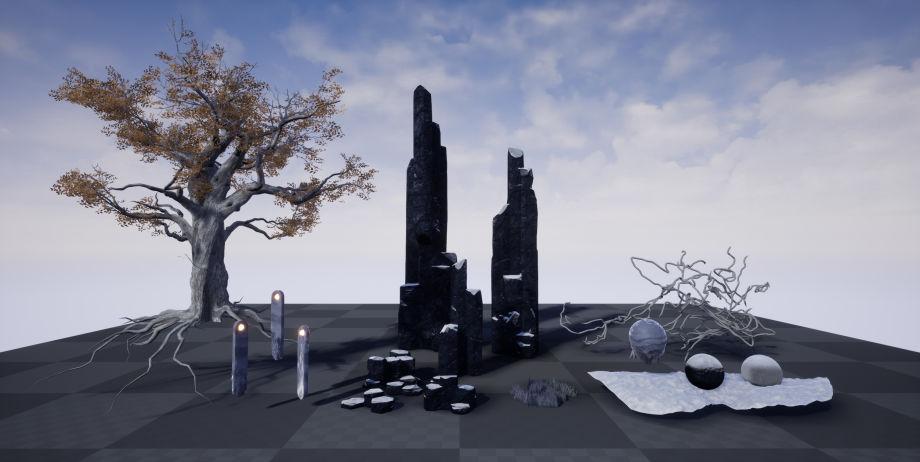 Colour palette plays a major role in Hollow Knight in setting the mood and emphasizing the lore. Such levels as Kingdom’s Edge and Resting Grounds really stood out for me. The backgrounds are dark and expansive, with hints of light peeking through. 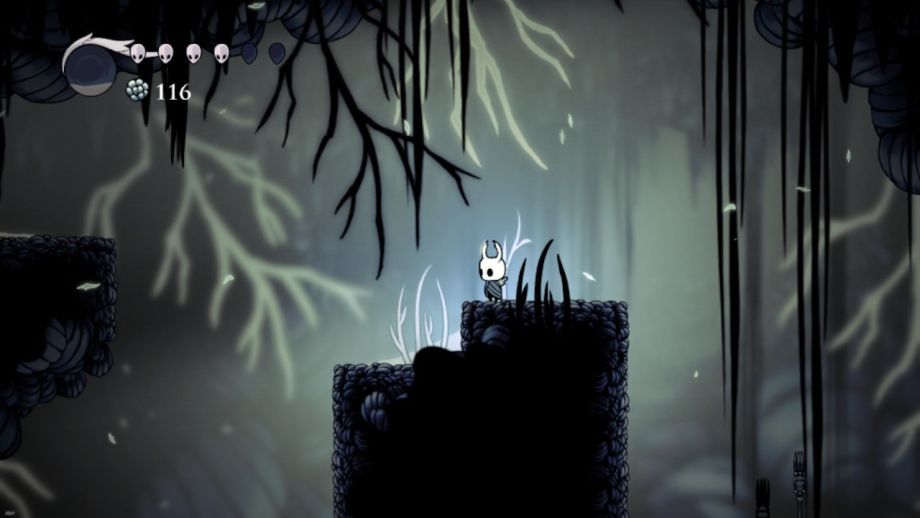 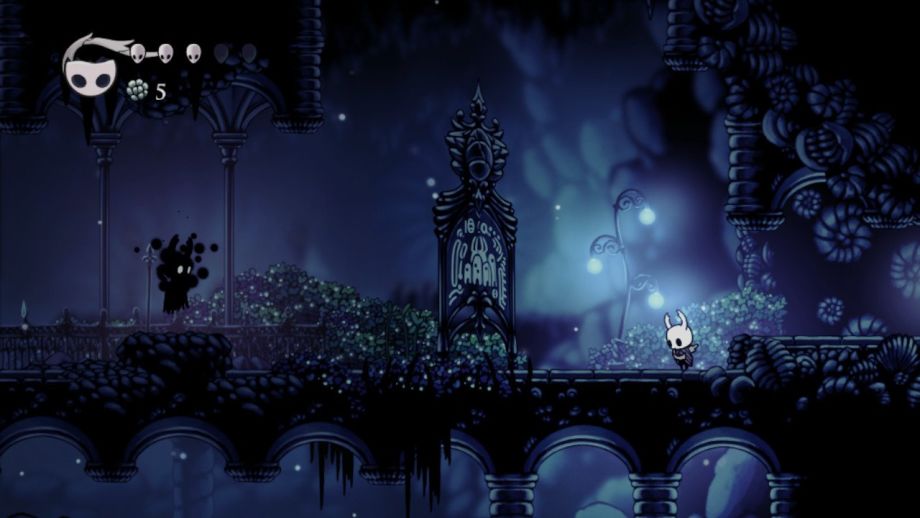 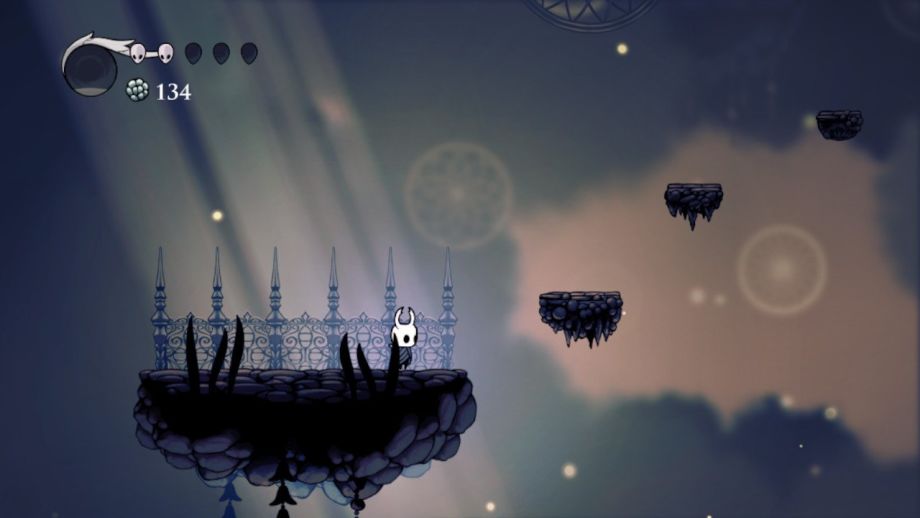 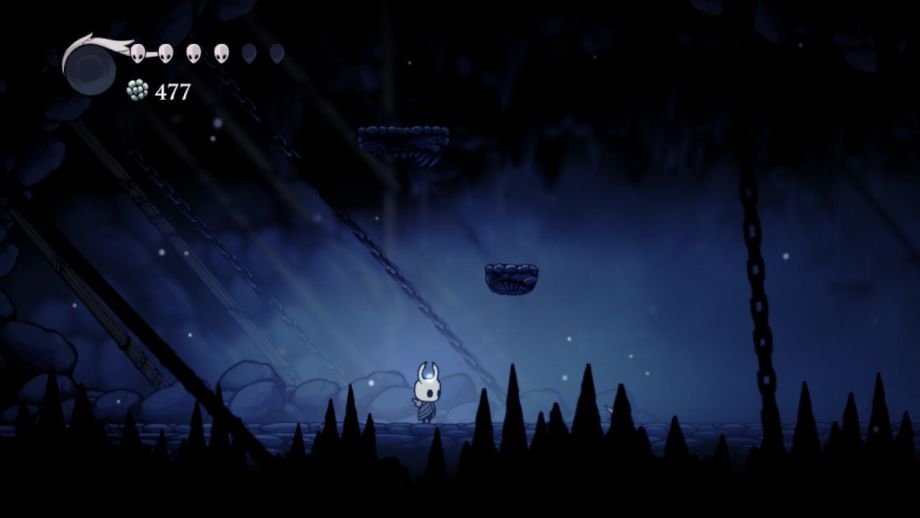 A decision was made early on for my scene of not having everything visible and to carefully select where the light fell to create ambiance. Where your eye is drawn to in my scene is intentional and I do this by using a strong directional light to highlight the tree and key areas of secondary interest. The purple mid tones are driven by Exposure, Exponential Height Fog, and Skylight. It took several attempts to light the cave as striking a balance between darkness, visible and totally blown-out was a worthwhile challenge. It’s alarmingly easy to move away from your desired atmosphere by simply tweaking a few sliders in Post-Processing. Take your time, refer back to your references and enjoy the process!