Simon Peloquin did a very interesting breakdown of his lovely 3d weapon asset, inspired by The Order 1886. 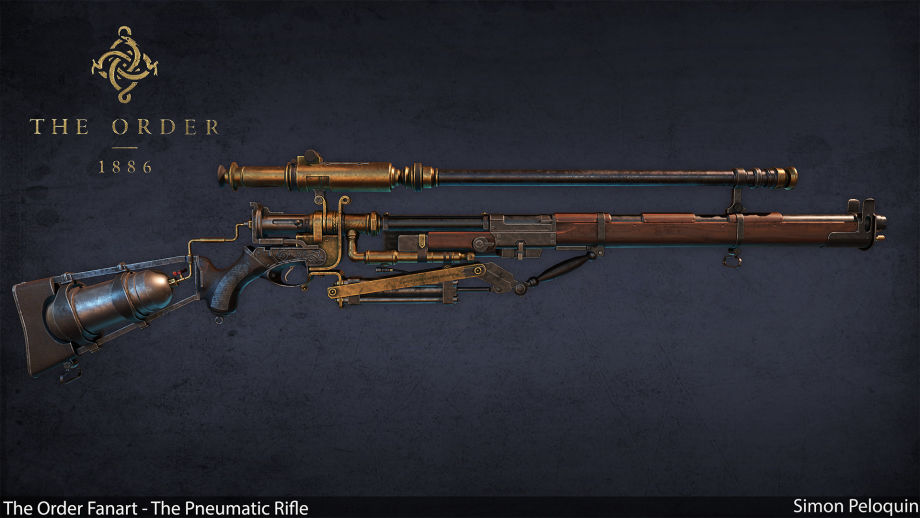 Hey, my name is Simon Peloquin, I live in Montreal and I’ve been working as a generalist 3D artist for about 3 years now. I started doing 3D only 4-5 years ago. Before that, I’ve always been a gamer and were always interested in the ”behind the scenes” of game development, but never really committed myself to look seriously into it. Living in Montreal my whole life probably also influenced me in my career decision since I’ve been used to hearing about studios like Ubisoft Montreal or WB Games Montreal for many years. After realizing that the regular college programs weren’t suiting me very well, I decided to sign in for a 3D art course aimed towards video games. Since then, I’ve been passionate about 3D and other types of visual arts.

When I want to start a new personal project, I always try to spend some time looking for some good concepts and good references. Something that I’ve heard a lot when I started 3D and that I still hear very often is that it is very important to start with a strong concept if you want to produce a good 3D asset. More than once, I’ve made the mistake to try to reproduce a not-so-good concept or to simply go with my own ideas. I think that as a junior artist, it’s important to trust more experienced concept, artists/designers, out there. 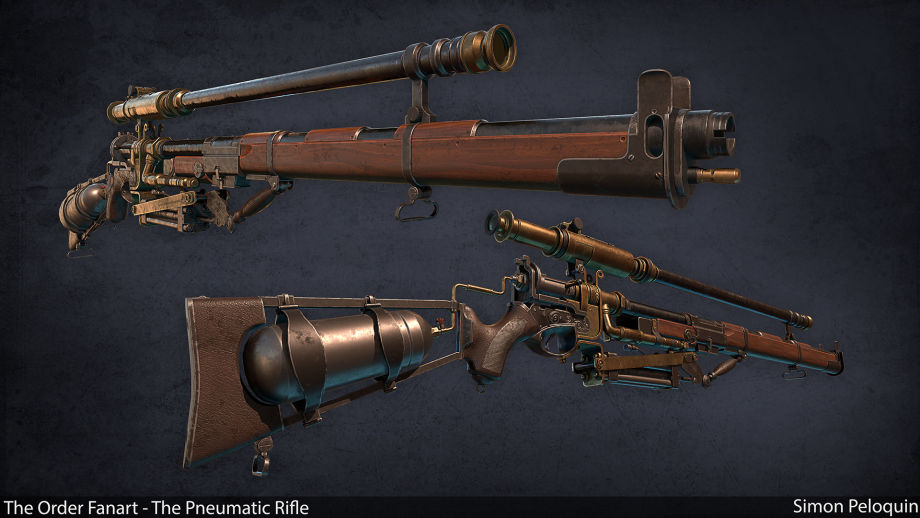 While searching for some ideas and inspiration on Artstation, I stumbled upon Anton Lavrushkin‘s The Order 1886 fanart concepts. I immediately fell in love with these 2 concepts because they are very detailed and because I personally also am a fan of The Order’s steampunk universe. I remember playing that game about 3 years ago when I got my PlayStation 4 and being flabbergasted by how amazing it looked! I then decided to start by reproducing the grenade concept, which was fairly simple, and then tackle a bigger challenge: The Pneumatic Rifle. 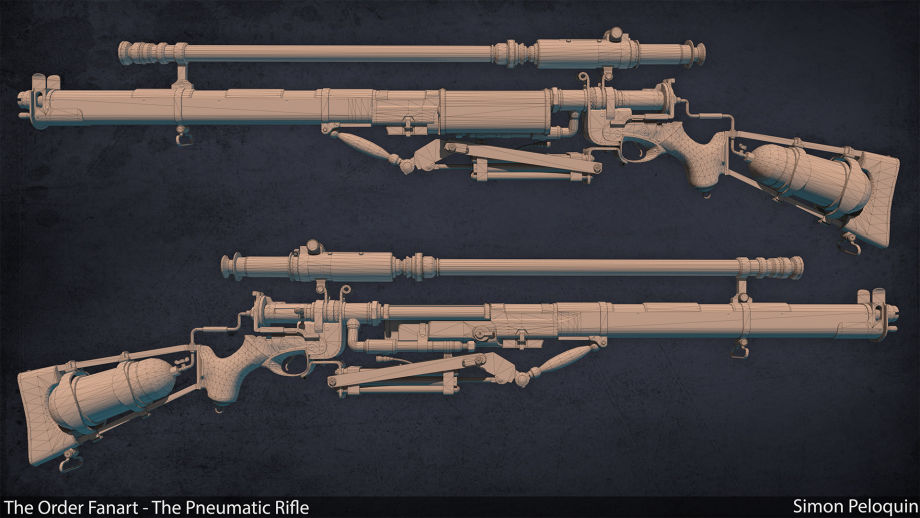 The first steps when starting a new project should always be to look for some references. I personally am not an expert of guns or rifles in general, so I had to search for a lot of different types of weapons and try to understand what inspired the concept artist to adopt a real rifle to the Steampunk universe. I also like to find some 3D refs to see how other artists adapted real models to 3D art.

When I’m ready to start modeling, I bring my orthographic concept in 3ds Max and start by blocking out the rifle. Obviously, since the orthographic concept I was working on was pretty detailed, it was somewhat easy to get a decent blockout quickly, but the bigger challenge was to understand the different thickness of the different parts since I didn’t have any top-view concept. I started by guessing approximately how I thought the pieces should fit together, but eventually had to come back and make some changes when I later realized it wouldn’t work out perfectly. Trying a get a good blockout with proportions as close as possible to the concept will save you a lot of headaches later on!

When I’m satisfied with my blockout, I start my high poly. I like to focus on specific parts one after the other and try to push the details as close as possible to the concept. (I also try to keep in mind that I can add some simple normal map details in Substance Painter later-on instead of spending too much time modeling them.) 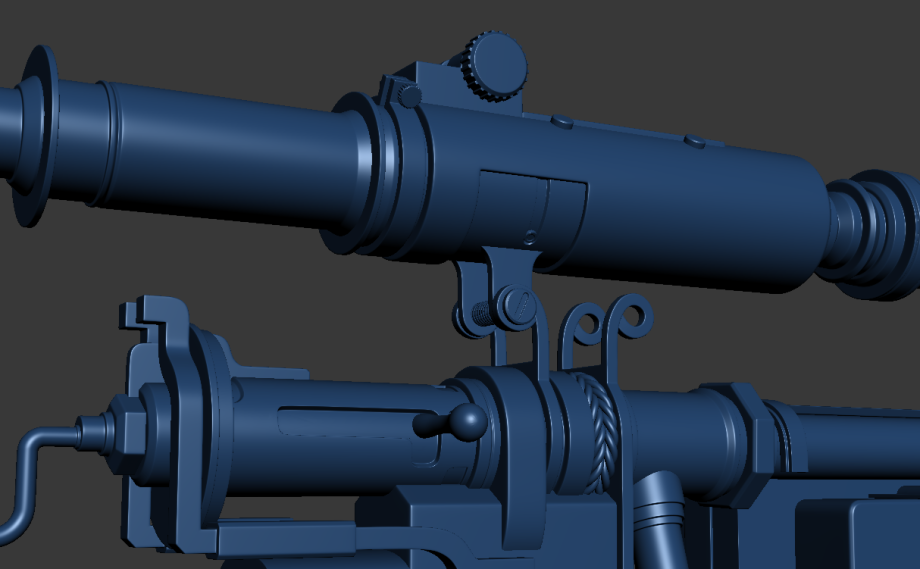 My high poly workflow is deeply inspired by Tim Bergholz (AKA Chamferzone)’s workflow. I use the Quad Chamfer modifier for 3DS Max to add my control loops based on the model’s smoothing groups and then add a Turbosmooth modifier. I really like this method because later on, when I’m working on the low poly model, I can simply start by removing the 2 modifiers from the base model and work from there! It actually saves me a lot of time. 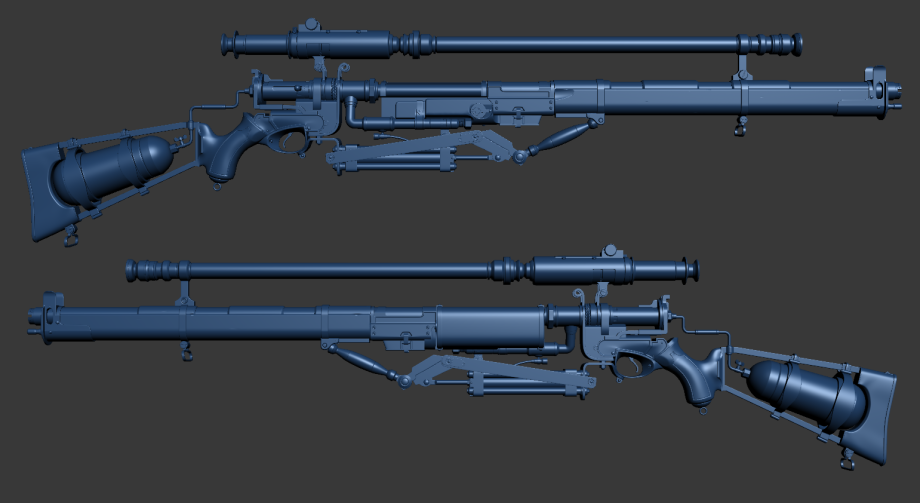 I also used Zbrush some details that I felt more confident sculpting than modeling in 3DS Max, especially some edge damage on the wooden parts.

I really like to spend some good amount of time on my UVs to make sure to maximize my pixel density on my models. For this weapon, I wanted to give myself a fairly reasonable limit, which is 1 texture set of 4096^2. I almost didn’t use any symmetry or UVs overlap for this asset, but it might have been a good idea to do so, I will probably keep that in mind for my next weapon. 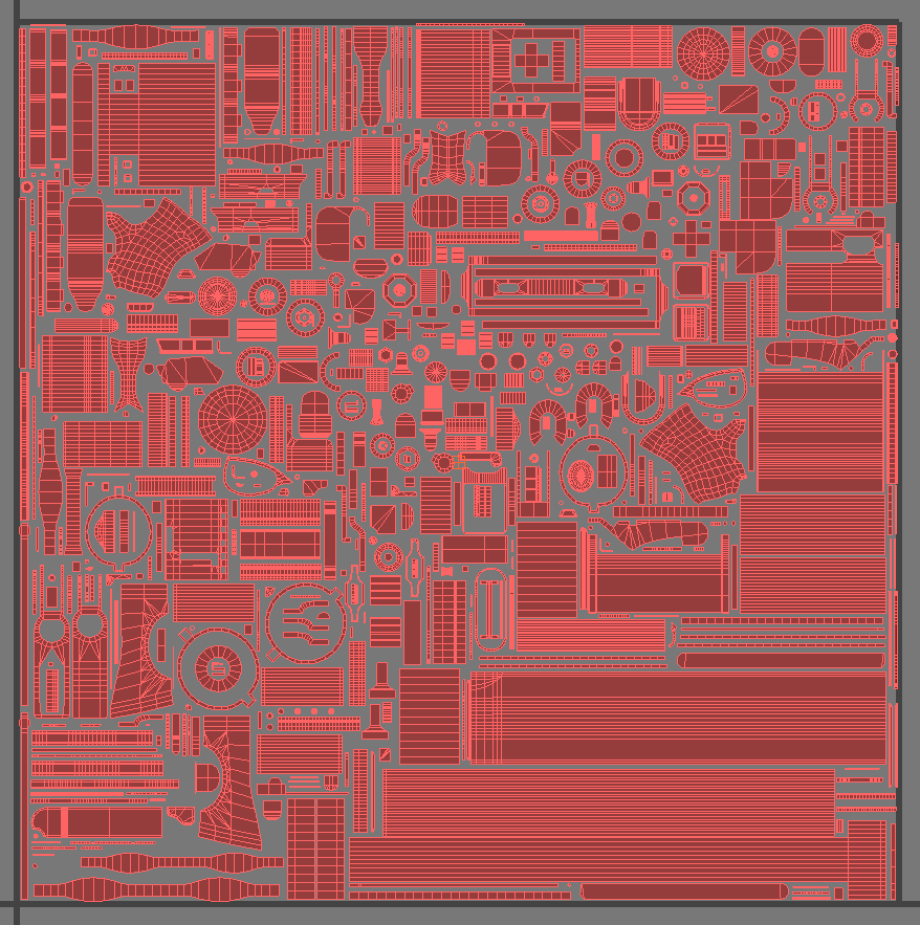 For my texturing, I do almost everything in Substance Painter. I start by creating the different masks to differentiate the different materials. I think the most important material I had to nail for this asset was this famous brass-like metal associated with the Steampunk aesthetic. Sometimes I like to look for already made Smart Materials on Substance Share and peel them down layer by layer to understand how they were made to then re-create something similar and more adapted to my needs. 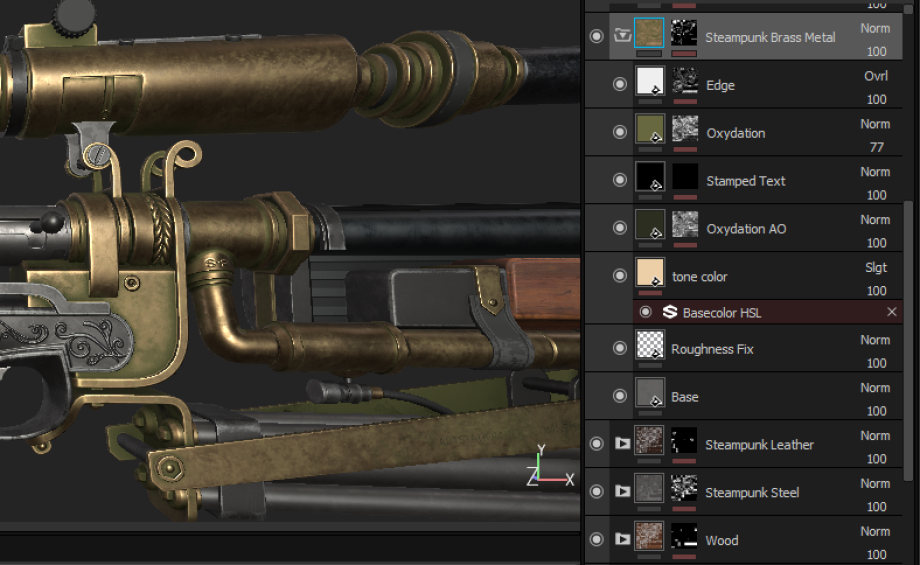 Lighting up a proper render for a rifle ended up being a little more difficult than I thought! Since the weapon has such a complex shape, I needed multiple lights and a lot of tweaking to get a nice result.

The first step when rendering in Marmoset should be to look at the different sky presets there are and try to find the one that’s the closest to what you’re looking for and the work from there. I obviously wanted to have nice highlights on the point of interests of the rifle and also trying to get a subtle blue rim light to give more volumes to the cylinders. When you play around with a lot of lights, you also want to avoid overexposing your model! 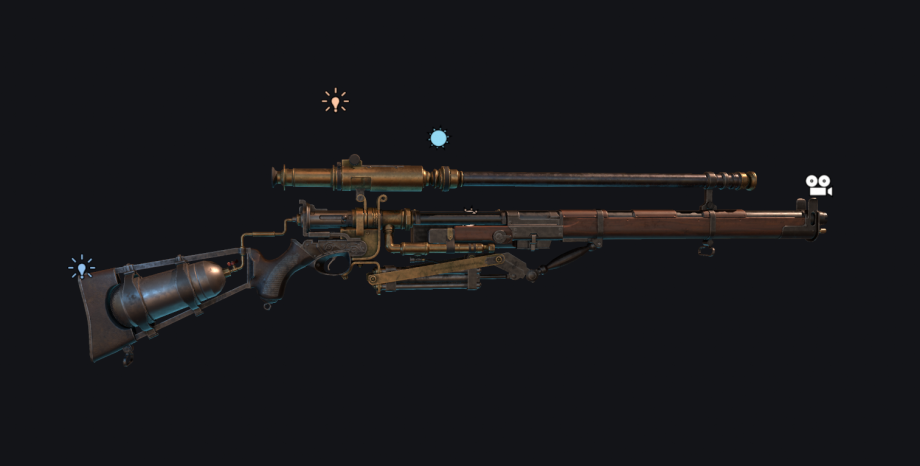 When I was finally pretty satisfied with the lighting, I needed to bring my render in Photoshop to do some adjustments because the rifle itself ended up being pretty dark. I really like having a dark royal blue background because I think it contrasts nicely with the brass metal material. I then added a lighter blurry gradient behind the rifle to make it stand out more! Finally, I added a very subtly dark outer glow to the rifle and a grunge overlay to the background to give the render an old grimy look. 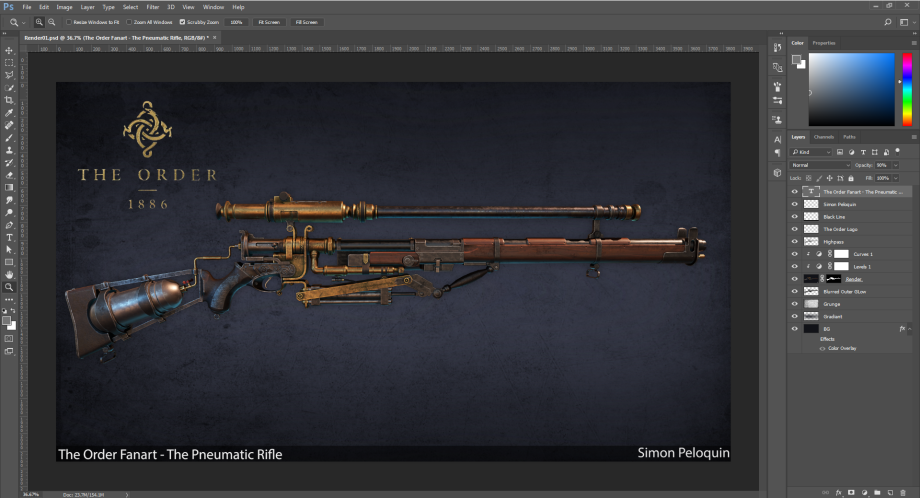 Hopefully, you found some interesting insights by reading through my quick article, don’t hesitate to message me on Artstation if you have more questions! Thanks for your time.