Peter Schwaegerle from Gnomon School of Visual Effects talked about his most recent project called Well of Initiation.

A Gnomon School of Visual Effects student Peter Schwaegerle talked about his most recent UE4 project called Well of Initiation. It is a nice example of building vertical strutures with the help of modern tools. The lighting here is simply amazing!

My name is Peter Schwaegerle, and  I am currently a student at Gnomon School of Visual Effects in my third year of study, primarily focusing in game environment and props.  Prior to this I studied mechanical engineering and fine art, then pursued illustration and concept.

I was initially inspired by this video covering the locations referenced for the Dark Souls series.  I think there is endless amounts to be learned from real world locations, through the history, culture, construction, aging, etc. Research is key. I always start my projects by browsing Pinterest and Google Images, and assembling giant libraries of reference. Collecting reference continues throughout the length of the project.  I also searched through YouTube for videos of the environment, which was actually the greatest resource. It provides a much better sense of the space, atmosphere, and general mood. Interpretation is also crucial, so I also found additional images representing the mood and atmosphere I ultimately wanted to achieve. I did as much research as possible to understand the purpose and usage of the real-world location, which would later drive many decisions throughout the entire process. 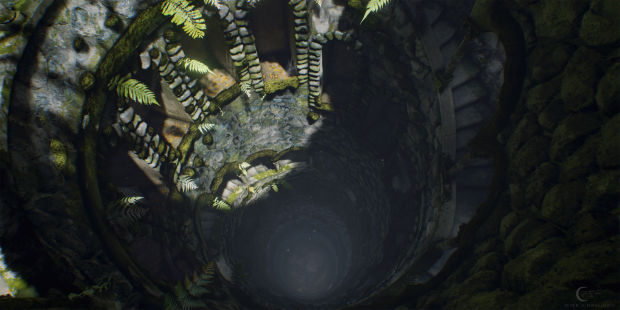 The scene was intended to be both a portfolio piece and a test to try and build a larger environment. I wanted to learn more about baked lighting and particles, improve my abilities in advanced materials, and learn Substance Designer. Creating modular assets, and achieving a cinematic, story-driven, and realistic feel were also important to me.

First I analyzed the scene and did a few sketches to ideate on what I wanted to achieve. Then I broke down the essential, modular assets and built them using Maya. I import and reassemble them in in UE4, and in the first person blueprint do several tests to make sure the assets snap together cleanly, and that the scale of the scene feels right.  I usually tweak the first person camera settings to set it to my own height so I can more easily relate to visual scale. I then take the assets into Zbrush and do chipping, damage, and other weathering. Having quick and dirty UV’s on this model at this stage can make using alphas to texture easy and straightforward.

A challenge I was aware of since the beginning of the scene was the stone walls.  I initially started with a 120 degree section of the wall, but because it is essentially a spiral, the UV’s couldn’t be matched up in a consistent way to allow the material to tile without seaming. Because the stone was parallaxed, the seams only become more evident.  So rather than trying to hide these seams, I kept it all a singular piece. 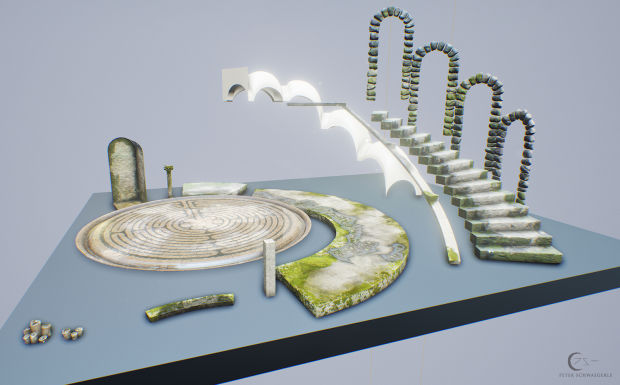 The moss was achieved by tweaking the technique shared by the guys behind Ryse: Son of Rome. This technique works really well for solid meshes, however because the bits of moss were placed on parallaxed geometry I needed to counteract the resulting hard edges. Using the DepthFade node in Unreal provided some interesting results. The leaf and fern textures are derived from Quixel Megascans. 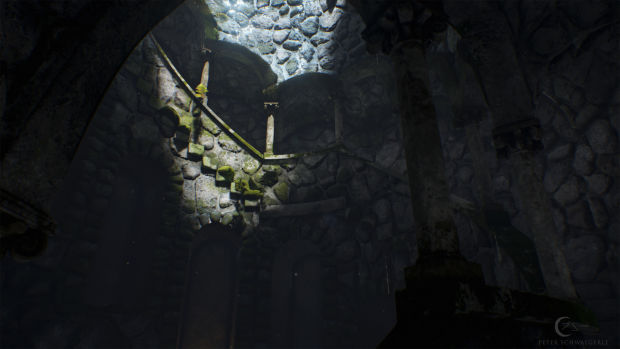 I initially attempted to hand sculpt each stone in the wall (after seeing Dannie Carlone’s inspiring work). I wasn’t pleased with my end result so I scrapped it, and started in Substance Designer.  Building the material procedurally means it can easily be randomized and reused in future projects.  The rest of the texturing was achieved with substance painter, and the moss was derived from a photo using Substance B2M and Adobe Photoshop.  I used masks and vertex painting to blend all the different materials.  A big key to realism is through integration and blending.  While a lot of materials can be baked into the texture, having the ability to blend and paint on modular assets not only creates realistic variation, but also makes it possible to reuse layers like moss, grime, and water on every surface through material functions. 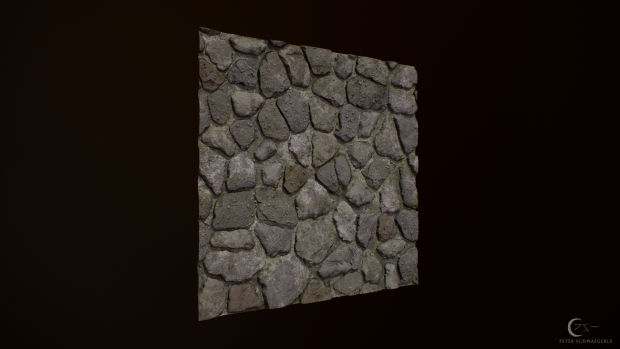 The lighting was actually the most difficult thing to work with in the scene.  I initially wanted a singular directional to light the entire scene, but even with cranking up the GI and tweaking the .ini file, the light just couldn’t reach certain areas.  There was a delicate balance with the intensity of the directional, as it started to blow out the light at the top of the scene, but was required to get the light to realistically reach the bottom of the well.  So the final light setup was a directional, skylight, a spotlight to emphasize the light shape at the top, and then multiple low intensity fills to cover the stairwells, and to help the light reach the bottom.  The candles are lit with emissive.  I wanted to achieve a duality between the warmer upper section and cooler lower section, so I manually colored the lights from a slight yellow to blue at the bottom. 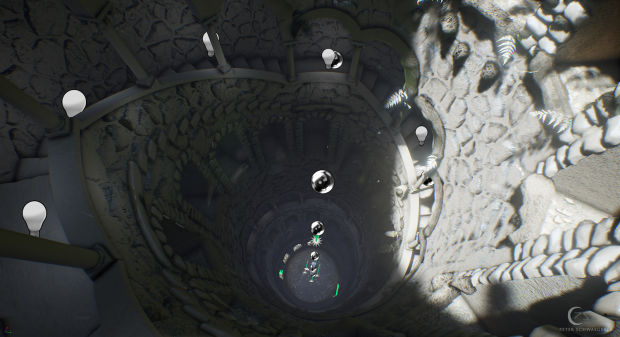 Layering and integration are the two key things to making a scene feel believable.  Look at tons of reference, and try and build a personal story for your scene.  Most of all, experiment! This is the best way learn and can lead to unexpected success.