Victoria Goldsmith shared a breakdown of her UE4 scene Astral Observatory inspired by  The Legend of Zelda: Majora's Mask game.

Hello! I’m Victoria Goldsmith, an Environment Artist currently working in the game industry. I have worked in the industry for about six years now; my experience has been a mix of working at indie companies, start-ups, and AAA studios. Importantly, my last three years have been focusing on VR development, with two AAA shipped games: Blood & Truth, a Sony London Studio's release, and most recently Dr. Who: The Edge of Time from Maze Theory.

My passion for games started at a very young age. I had floppy disks of Commander Keen, Monkey Island, Duke Nukem, and I would play whatever I could get my hands on. I was far too young to be playing Duke Nukem at the time! But even though I didn’t quite understand the meaning behind throwing money at strippers, I loved Duke's kick-ass quotes and blowing up monsters.

It's time to kick ass and chew bubble gum, and I'm all outta gum!

The first console I ever owned was the N64 and I got hooked on the Zelda series. I’ve bought almost every Nintendo console since then. Needless to say, I’ve always been a tomboy, and I insisted on playing all the games my boy cousins played and that has shaped who I am as an artist today. 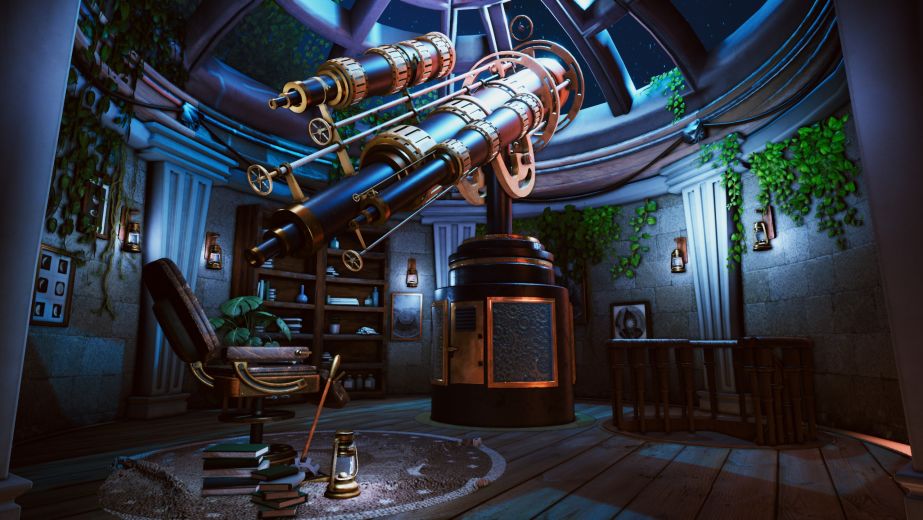 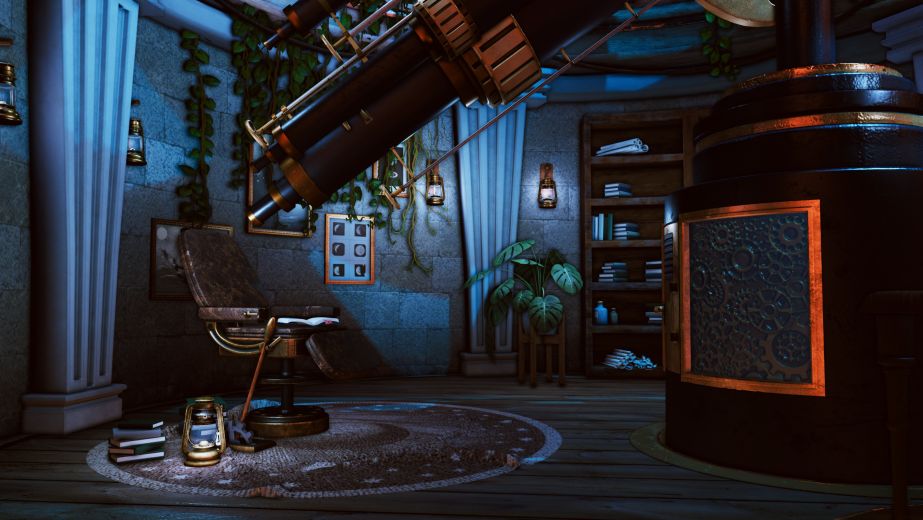 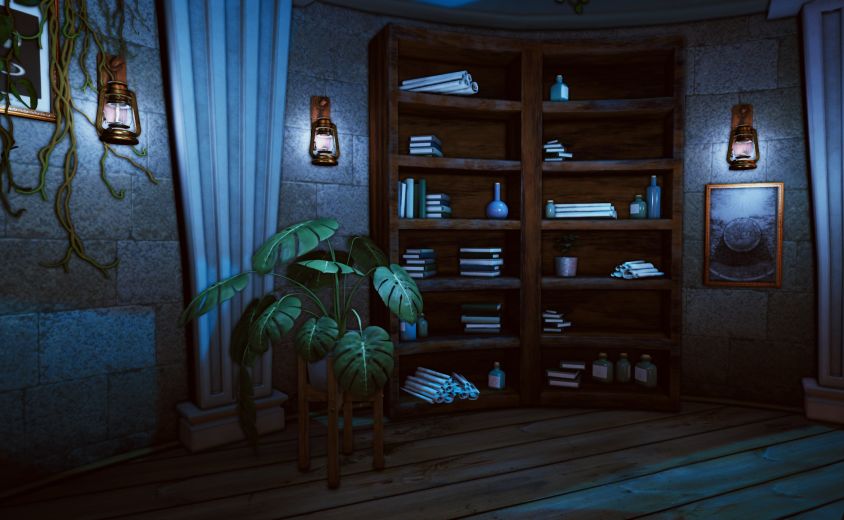 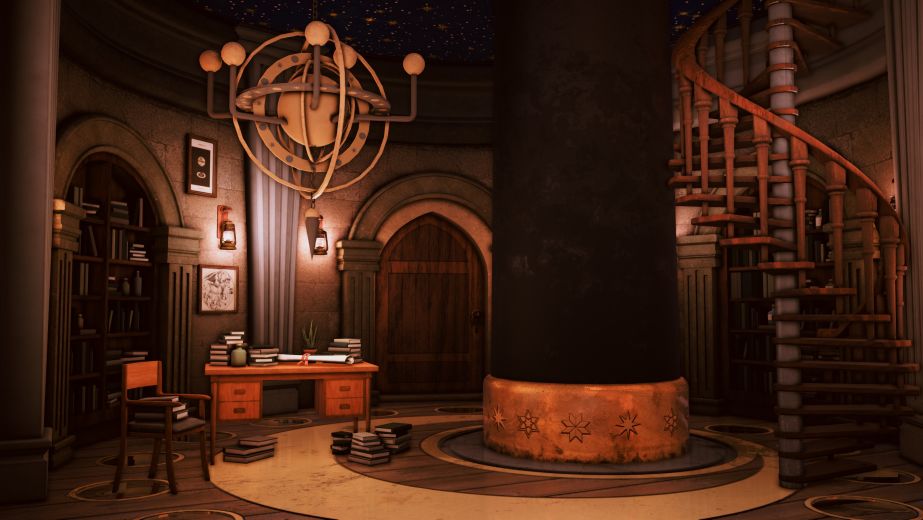 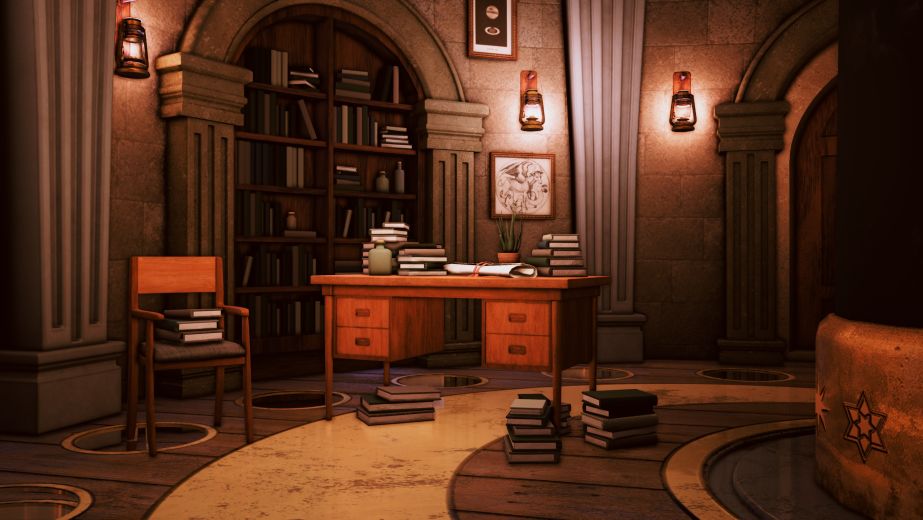 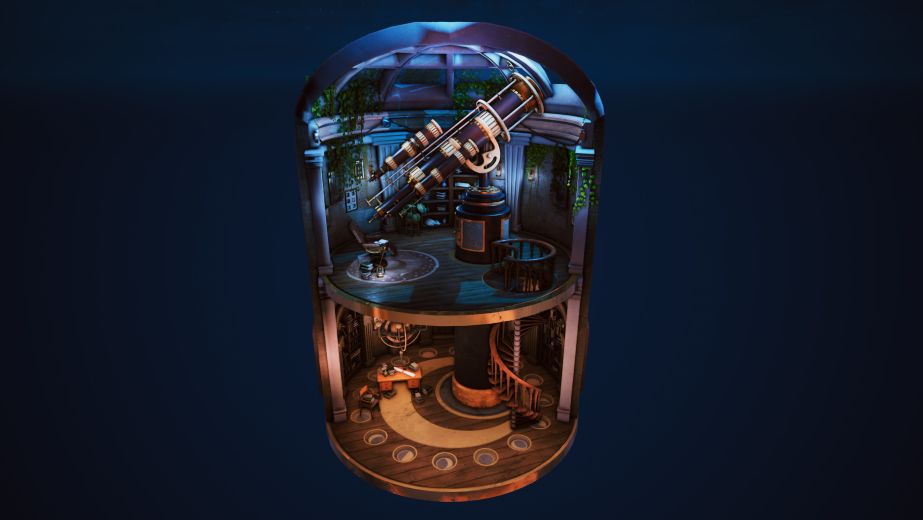 Majora's Mask, a later Nintendo release in 2000, was a game I became utterly obsessed with… and I’m still obsessed, actually. The ability to change masks into strange creatures blew my mind, but what really stuck with me is that the world of the game is permeated with an overwhelming melancholy as there are only three days before the apocalypse. There are side quests that are all equally strange and thrilling, allowing you to become immersed in someone else's world and become attached to them with a deepening sense of foreboding, as you know in three days their world will end…

One of the characters in Majora's Mask is an Astronomer named Professor Shikashi. You can find him in an Astral Observatory, where you collect a moon tear from looking into a telescope for a side quest. Entering this environment simultaneously brings me a deep sense of calm but also excitement. I want to know everything about the scene, look at every detail. Something interesting about the environment in Majora's Mask is how it is split up into two sections with two different interiors, the top dominated by a small stumpy telescope, the bottom is a storeroom with a dancing scarecrow. I thought it was such a nice idea and story and I wanted to learn more about this character, so it’s ultimately what inspired me for my own Astral Observatory Project.

This is a project that has taken me over a year, on-and-off while working full time. The environment has changed a lot structurally from the start, which I will break down further, but the one thing that has been consistent is the narrative I wanted to portray. The whole project is an attempt to capture a feeling. I wanted to distill that sense of encountering a mysterious and dreamlike place you would want to discover or stay in.

Before I start any kind of modeling or even reference-gathering, I always want to imagine what kind of environment this could be. Sometimes, if you rely on reference too early it can lead you down a rabbit hole that can over-influence you and drown out your own initial ideas. It’s better to be able to convey your own voice and ideas in your work, especially if it’s something you're making from scratch.

For this project, I decided I wanted to capture a cozy but practical space, a scene you could imagine someone studying in for a long period of time. I thought it would be cool to have some mechanical aspect to the scene that would read a bit steampunk or Victorian era. Originally, I had wanted a glass bottom with lots of gears and cogs but the design changed as I started blocking out. I also wanted lots of old scriptures as if someone was excessively studying the rituals of the old gods or discovered an ancient cult, this idea softened out a little and I framed some antiquarian astrology pages for the story aspect.

I looked at a lot of different telescopes, mechanical devices, and various observatories. Some telescopes were quite long and skinny, so I exaggerated the shapes on my own design. As I added lots of cogs, spy pieces, and smaller telescopes, I tried to make sure every added piece looked like it made sense on the telescope. The chair used for viewing was referenced from an old dentist chair and the chair in The Time Machine. References can make your ideas look practical and well-designed; you don’t need to reinvent the wheel for everything! Take the elements that help bring your own idea to life, or even add your own twist. 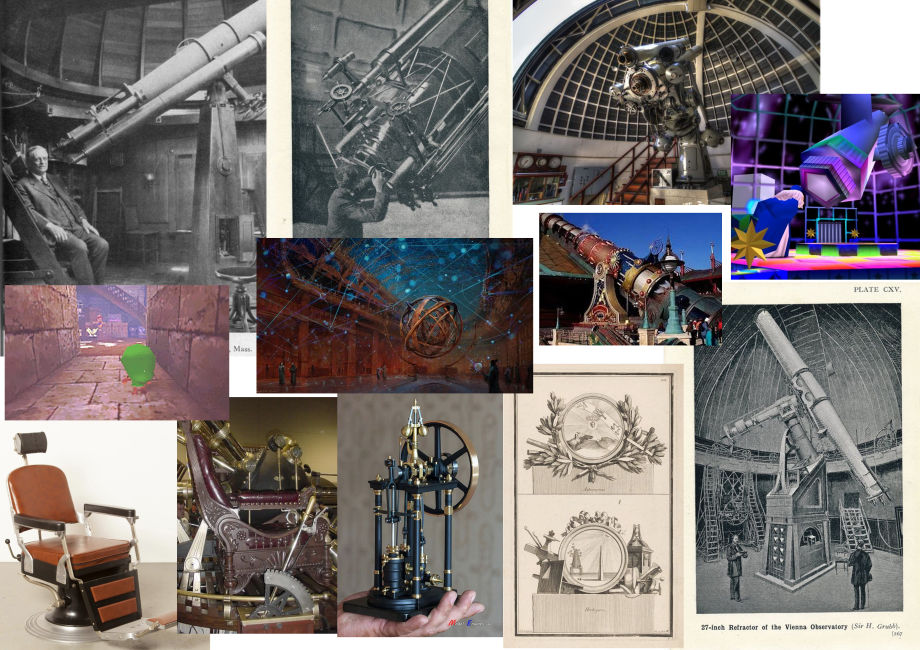 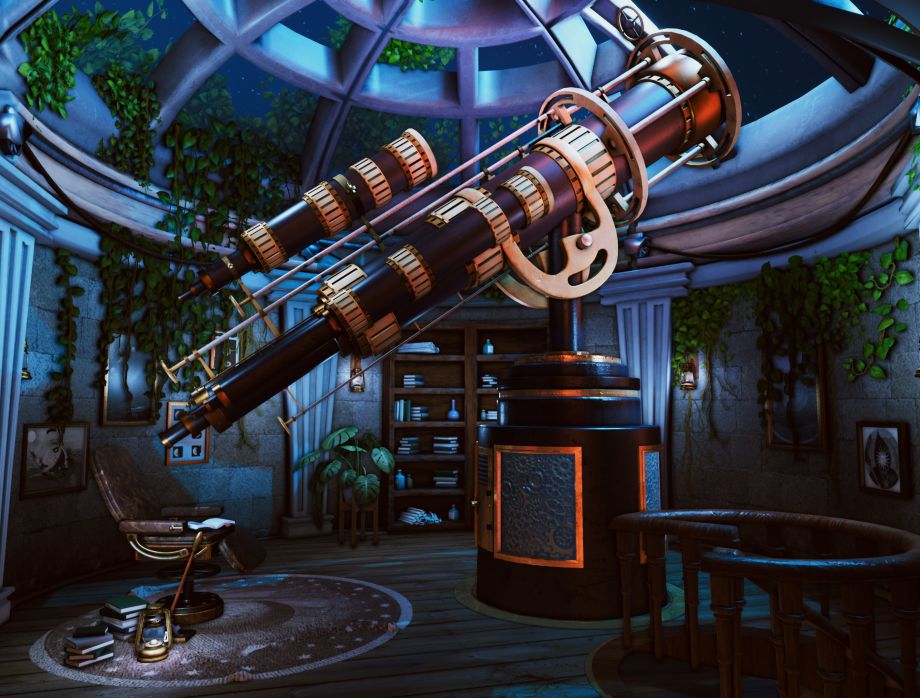 I wanted to make the telescope practical-looking but intricate and super complicated at the same time. I blocked out a few simple cylinders so that I knew the scale and depth were correct in the scene. Then, I made a kit set of cogs, cylinders, metal brackets, and gears. To give the telescope some sophistication I made a couple of bespoke pieces: to give it some styling, on the top of the main telescope I made a little crest, then the rotation of the base was used only once. When all the pieces were made I could then put it all together like a Lego kit to create something really bespoke-looking. I'd advise UV mapping first before you put assemble everything together, otherwise, it could be quite time-consuming to transfer UV attributes to lots of components.

For the texturing, I wanted a nice gold on metal contrast so that it looked expensive. Sometimes, I find that a limited color palette can have more of an impact than having lots of colors. I added some cogs behind the glass so that it looked like there was a mechanical inside and it could move 360° inside the room. 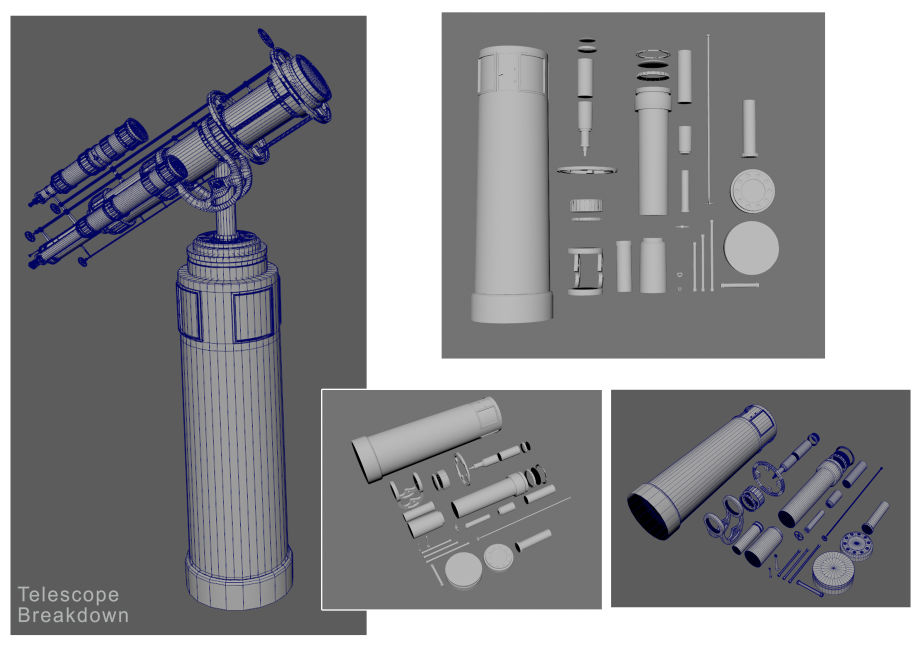 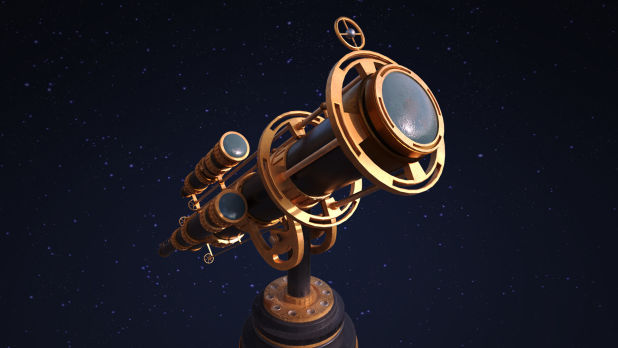 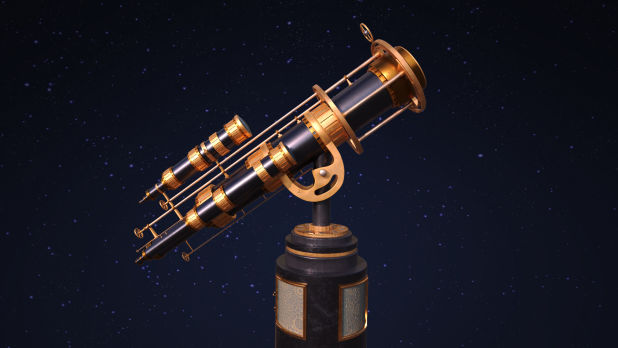 For practical reasons, the main structure of the environment is split up into sections, so that I could hide parts for rendering and make the walls even all the way around. I started with a cylinder and broke it up into five equal pieces, then I worked into one slice. I could then duplicate that one piece 72° for the five pieces to fit perfectly again.

I would say putting in the bulk pieces and big kit pieces first is a key thing to do early on, as it will give a strong structure for the scene and it will motivate you to get things finished. Certain elements like the wall lanterns, bookcase, and pillars could be duplicated too to bulk out the scene. I could then work around these to fill in more unique pieces to give variation.

When you have a good base you can then figure out the areas that you would like to be more bespoke and give them more of an interest or story. 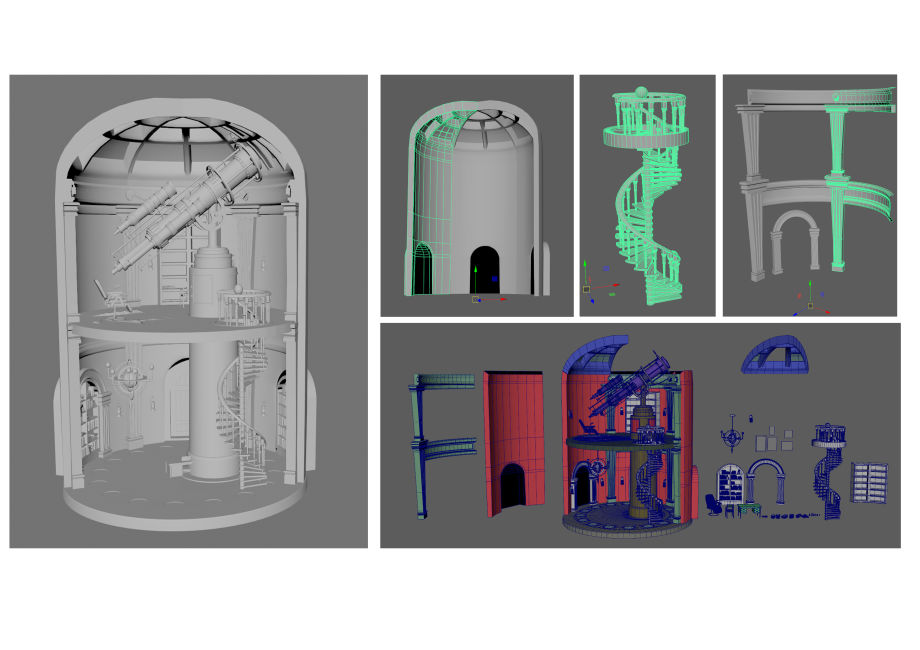 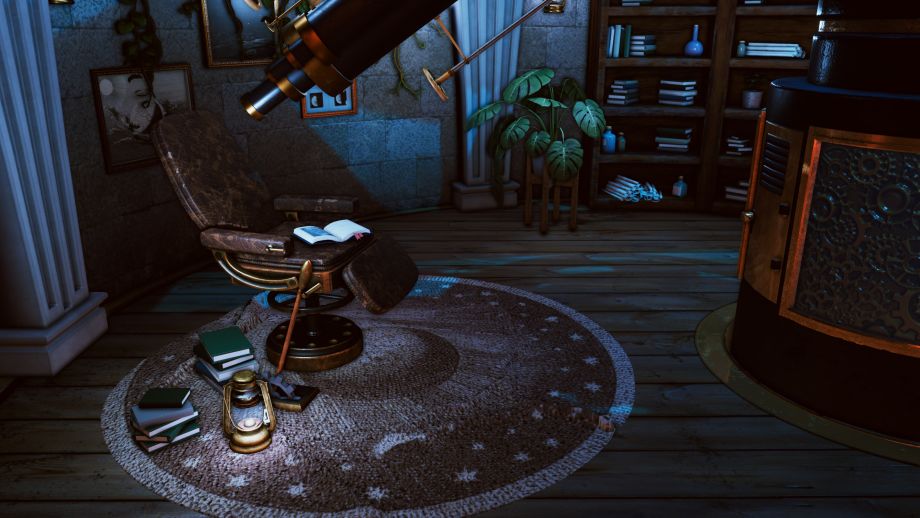 When I had a rough blockout, I did a quick paintover in Photoshop to test out some lighting colors. It’s really beneficial to plan the lighting out early on so that you can decide on your texturing color pallets and where to focus your attention in the scene accordingly. 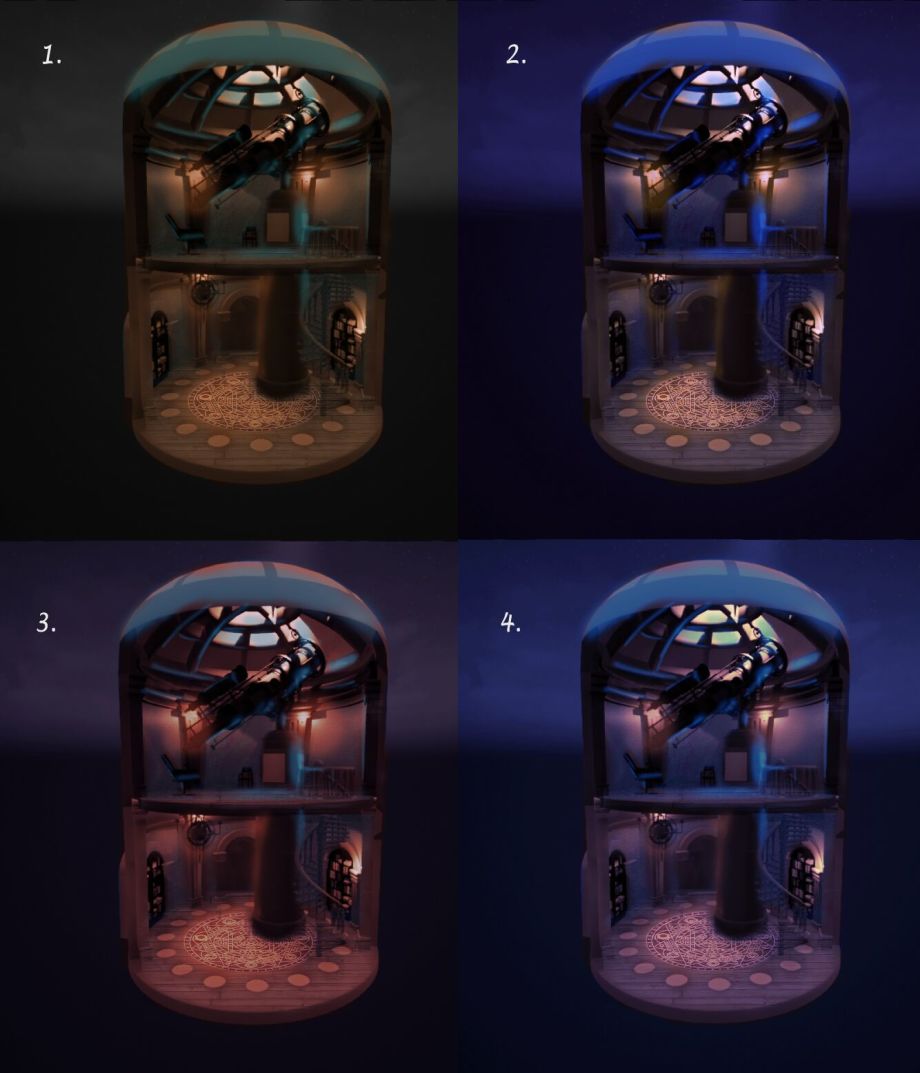 As the top section is dominated by a telescope looking out into the dark of space, placing strong light in the interior would make no sense to the narrative because you would have light pollution. Instead, I decided to light the top section blue, as if it were lit up by a full moon, and the bottom could have my warm cozy study lighting. I chose blue and orange because they are complementary colours which also matched both of the moods I wanted to portray.

When lighting, I always illuminate the scene based on where light would naturally come from. I used a directional light for the main light source as if it was coming from the moon, and point lights which were baked around the walls for some nice ambient occlusion. Then, in any areas that needed a bit of a boost, I added some dynamic point lights; I did this particularly around the chair and the top of the telescope. In the top section, I made sure the shadows were quite strong so that it got a nice silhouette shape from the windows. 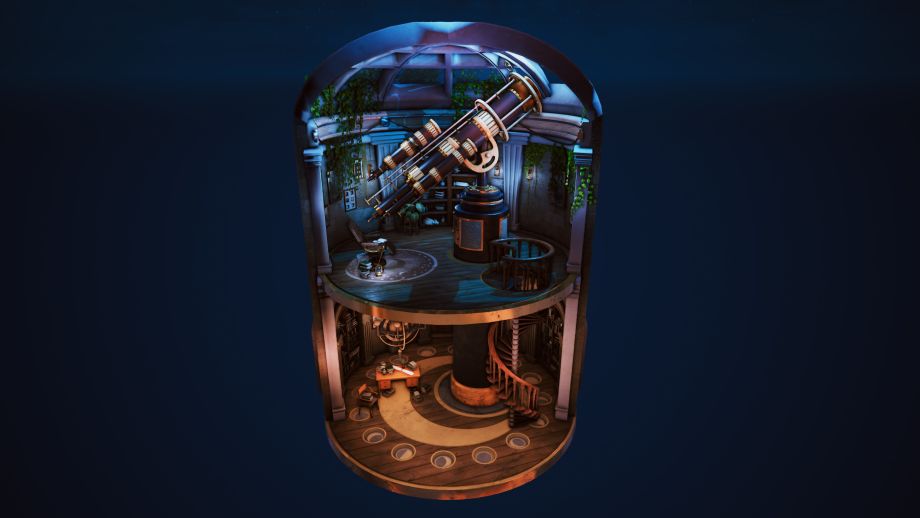 The texturing was all done by hand in Substance Painter; I used a mix of natural elements like wood and man-made materials like metal for the harder surfaces of the technical elements. I used a lot of the materials from Substance Source as base materials which I would then tweak for each asset. For the lower ceiling, I made a custom star material in Substance Designer. 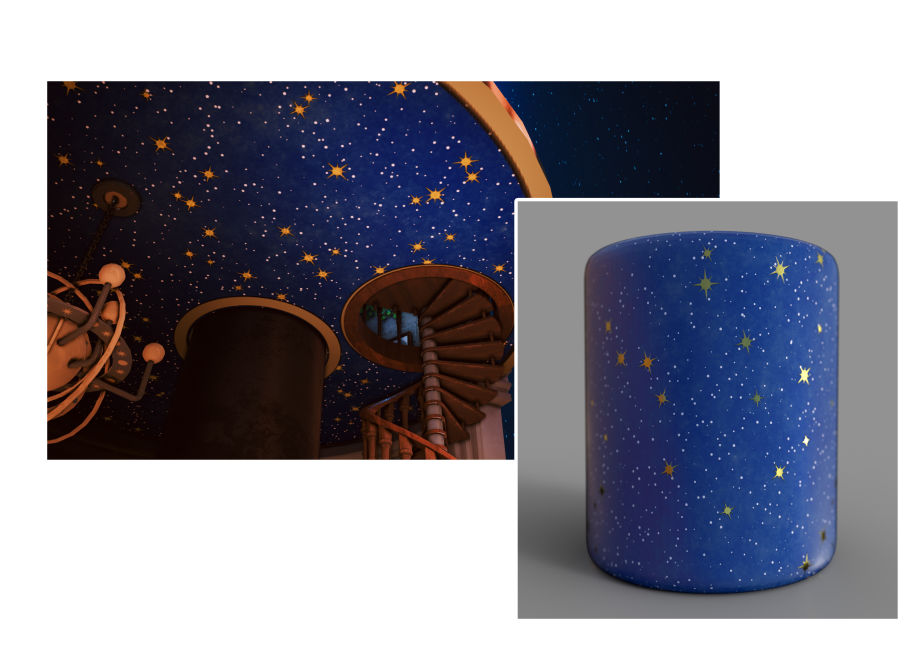 The biggest challenge was working with a cylindrical room and fighting the perspective challenges it presents. The telescope had to dominate the space but not so much that it would take up the whole room to the point of being oppressive. This became a balancing act: if I made the telescope smaller I would lose that 'wow scale' impact and there would be issues with it not reaching the roof window, but any changes to the scale would make the room feel too small or too big. Originally, I wanted to have one level, and each room was going to have its own little diorama, but it didn’t feel right and I knew I could push it more. 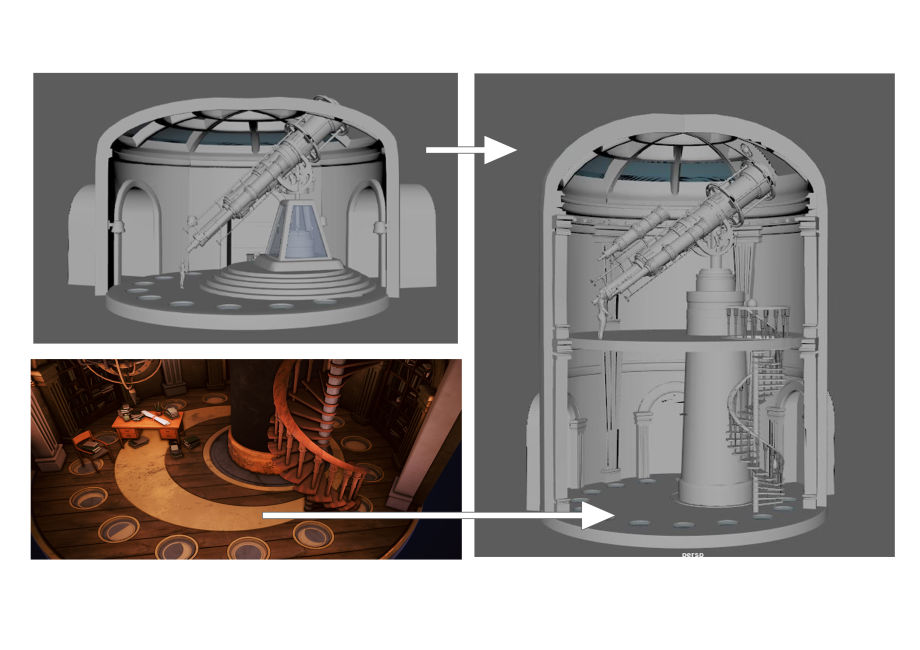 In the end, I moved the telescope off-center, which didn't look right composition-wise but fixed my height issues. However, this gave me a new challenge with the composition, so to counterbalance this, I added a central circle at the bottom for visual balance, and it worked. The central circle on the bottom floor tricks the eye into thinking everything is centralized when it's not. Like all good solutions to problems, this fix actually turned into a nice feature, and I added grooves like the ability of the telescope to be turned 360° and a moon phase around the edge.

I hope you enjoyed the article, keep being curious and go make some cool art!