Check out a nice guide to designs creatures for film by Alvaro Zabala that goes over all the essential steps.

Check out a nice guide to designs creatures for film by Alvaro Zabala that goes over all the essential steps.

To anyone interested or a bit curious about the process of designing a creature for film, from gathering reference and blocking out the first shapes, to the final comp, I’m Alvaro Zabala, a recent Gnomon graduate currently working as a 3D Modeler at Blur Studio, and I will describe in this article what my process is like and the techniques I go after to make this possible.

Before continuing, a little about me would help understand why I chose to recreate a creature as iconic as Frankenstein’s Monster. Throughout my childhood, fantasy was always present. But unlike other kids playing the good side and winning battles as heroes saving the world, I always found myself puzzled by the evil behind the “bad guys” and “monsters”, I wanted to know where it all came from and why were they are so repulsive to everyone else. I became a fan of the classics and it’s creatures, I learnt their stories and their tragedies. I learned how to empathize with them and to understand their humanity and how they relate to us.

When I started 3D and after years of practice I was able to model with a certain degree of quality but it wasn’t enough. I realized it was required to imbue these creations with the sentiment and pain needed to surpass being just a model and becoming a living thing able to express those emotions. 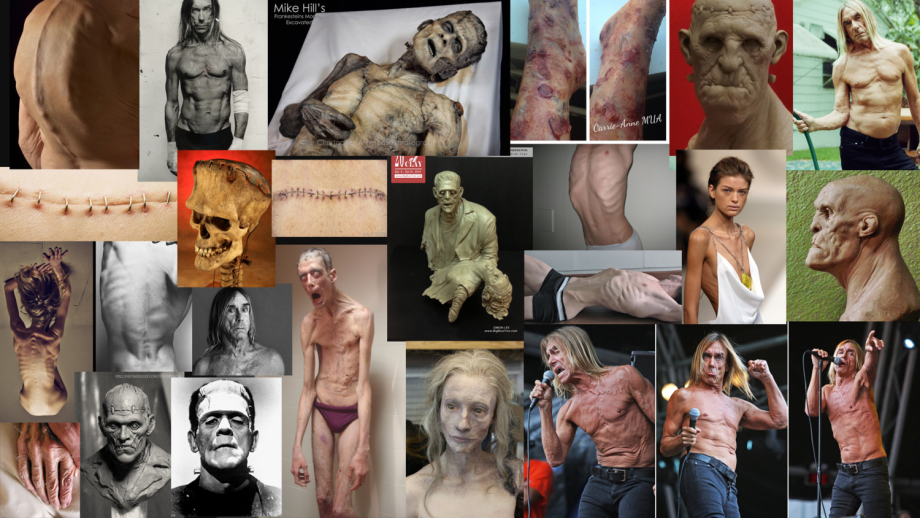 A key step in my process, as well as my starting point, is reference. The use of reference not only determines how accurate and grounded your piece can be but also it can provide you with different and new tactics to approach your project. The way I like to organize myself is gathering a broad range of references that provides me with different angles in my creative process.

The images that I gather help me determine how I want my piece to look stylistically, research the actual reality of what I’m portraying (anatomy, wrinkles, etc), and, my most important one: I have reference for HOW it should make you feel. This allows me to think about the way the character is perceived even before I start sculpting.

For Frankenstein’s Creature I tried to portray a tragic monster that besides any disgusting appearance his humanity is the most powerful message that comes across. Completely overpowering his physical aspect. 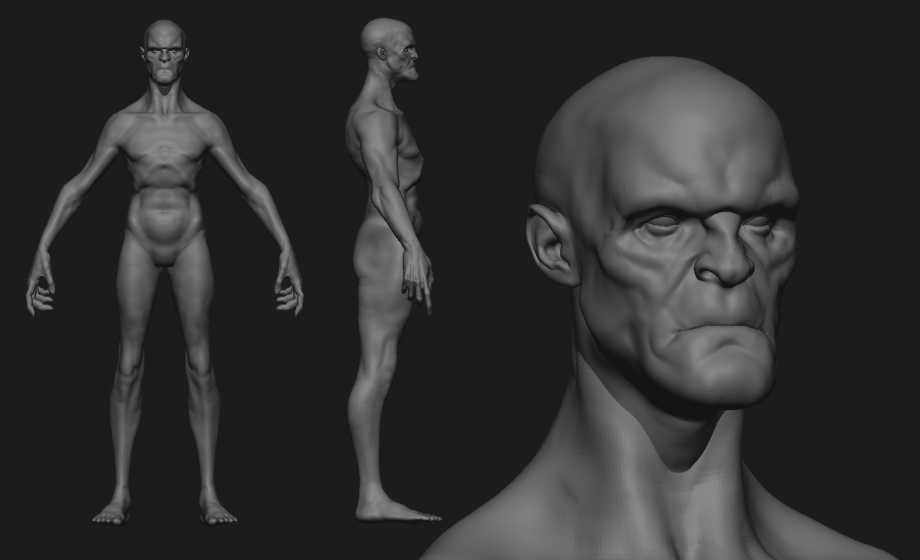 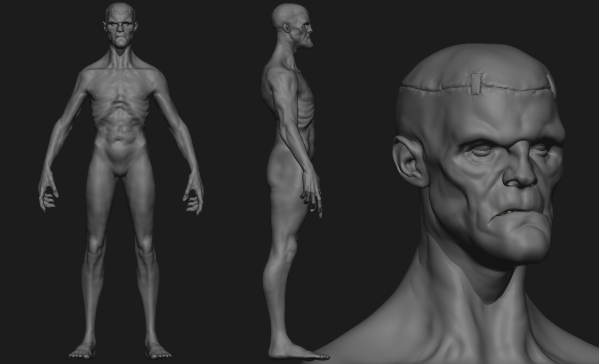 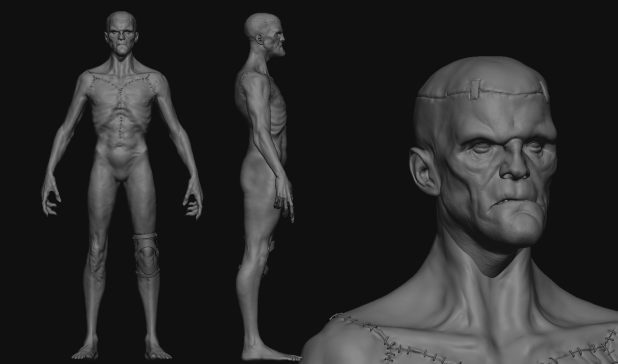 Since its a concept piece I have a lot more freedom technically speaking and I didn’t need to worry too much about topology, UVs and symmetry, as you normally would with a production model. The dynamesh feature inside of Zbrush allowed me to push the beginning stages of the piece to certain extremes with ease until I was happy with the result. After zremeshing I started to define more carefully the shapes and forms of the concept. I got to a point where the proportion and anatomy relationship reached the harmony I was looking for. Having a clear goal, and after making small adjustments, the project became much easier. 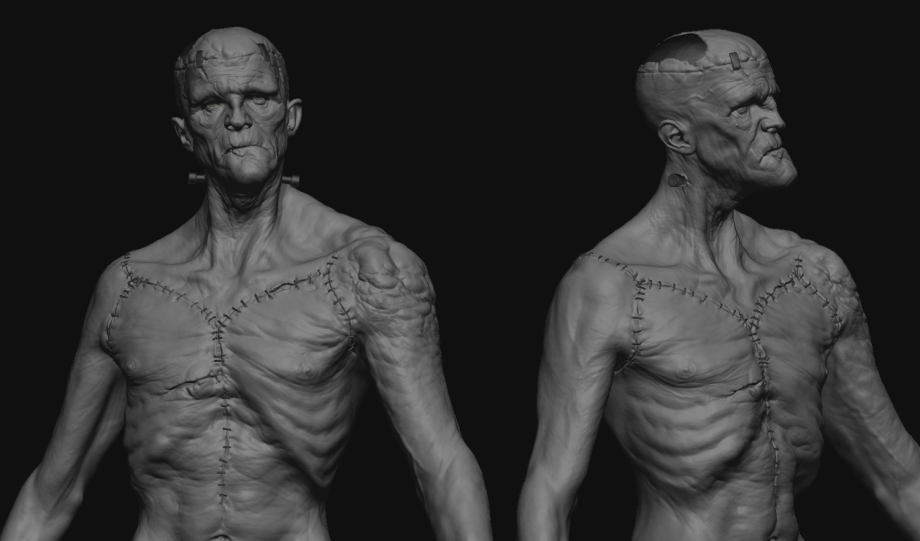 It is very important to send a message through expression, hence the process of sculpting the face is of upmost importance in any project.

Even though I feel strongly that a sculpture should say everything in primary and secondary forms, detailing is an important step in bringing a piece together. Detailing helps to push the sculpt to the level of putrefaction and decay that was needed for this project. 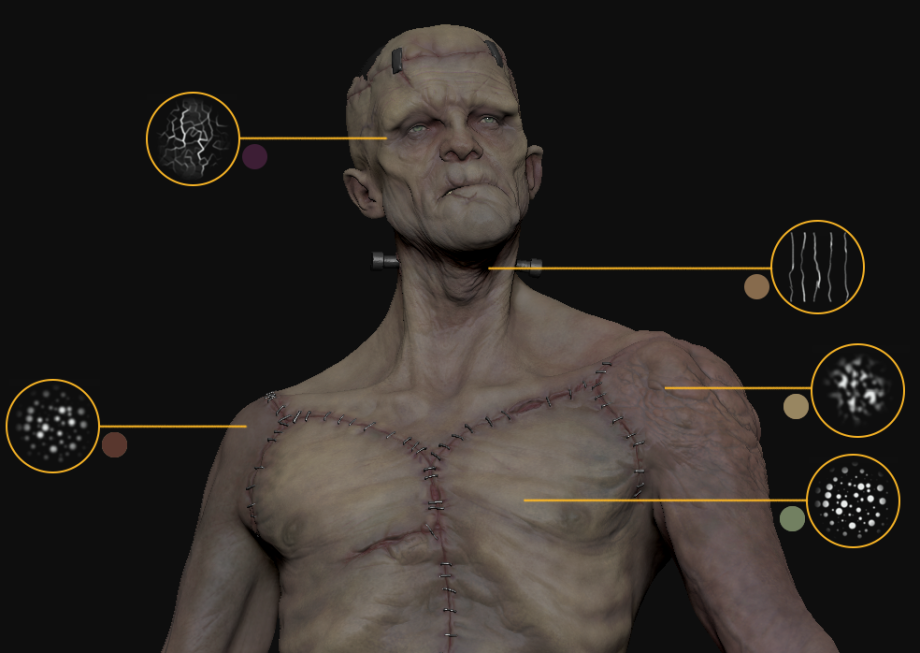 After finishing the sculpting side of the project it was time for the color. For these type of concept pieces the texturing is just a simple touch to give that finishing look. I opted to stay in Zbrush and use the painting feature called PolyPaint, which allows me to give a very quick and organic look to my sculpts.

Mixing different colors such as different tones of red and purple to give a fleshy look as well as adding different hues of green to get decaying appearance. Flooding colors with a low RGB intensity allowed me to achieve a similar result as color correction does. Those small nudges helped finesse the final colors without spoiling the underlying work.

The variety of brushes and alphas that Zbrush offers also helped for the detailing of the skin; Using different cavity masks allowed me to accentuate the small details and cuts in his skin.

Once all the heavy lifting was done It was time to render the final image. Using Zbrush’s BPR (Internal renderer) and a different lighting setup and materials I gathered a variety of stills to have at my disposal for the final compositing. 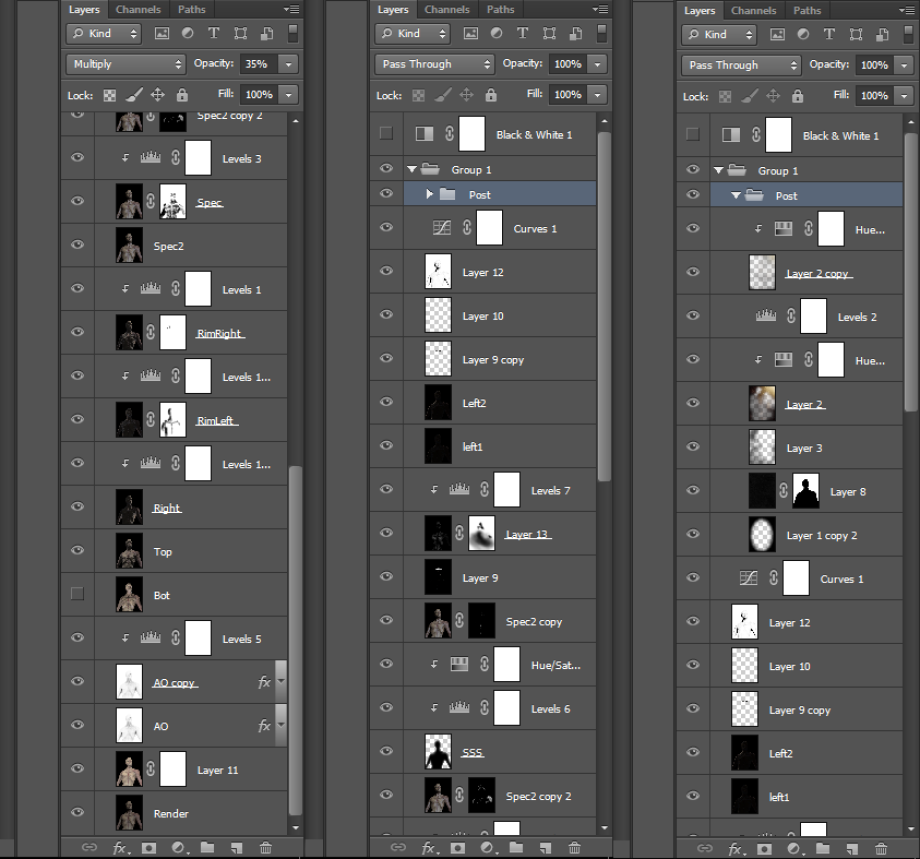 Laying all the render passes with the different lighting scenarios and materials is the best way to start this process. Once I had all my layers organized I started to tweak the blending modes and the opacity to achieve a balanced piece. After I was happy with the result I added some final touches; vignette, dust particles and a strong key light. These last tweaks closed a simple yet effective comp for this creature.

With the main purpose unchanged, the final compositing just reinforced the idea which started this project: to portray the other side of monsters, the one we often forget.

Hopefully this helps any reader that is curious about the process and techniques used to achieve an image of this kind, or wants inspiration of any sort! 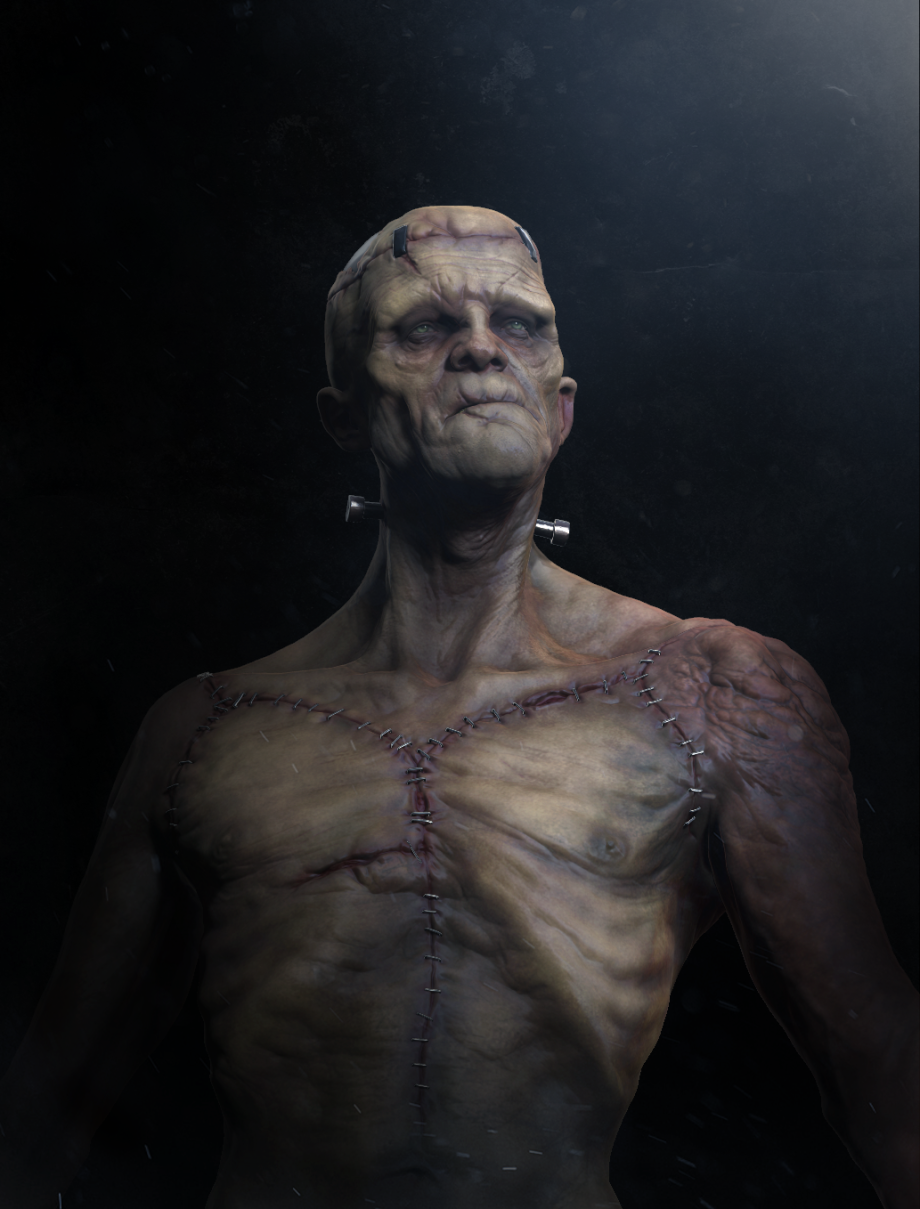 Special thanks to Jared Krichevsky for all the guidance.