We talked to Lindsay Jurgensen of Radial Games about moving this physically-based game from browser to VR.

In 2008, Colin Northway made a Flash game that would leave millions of players slouched over their computer screens building contraptions. In 2016, the game finds its right fit in the world of virtual reality.

Fantastic Contraption inserts you into a whimsical world where you build life-sized contraptions to complete each puzzle. We talked to Lindsay Jurgensen of Radial Games about moving this physically-based game from browser to VR.

What are the origins of the Fantastic Contraption?

It was originally a 2D Flash game made by Colin and Sarah Northway (Northway Games). Andy (Moore) and I partnered up with them to bring Contraption into VR. It would’ve been interesting to make the original a 3D game but until virtual reality happened, it wasn’t possible because you need to have two hands to manipulate things in 3D space. The ability to grab and move stuff accurately in 3D is very difficult to do without a hand interaction that you can visualize in 3D. As part of our development, we have a mouse and keyboard set up for the game and it’s barely usable. VR was just awesome for it.

What was it like taking the concept in the game into VR?

It was nice to have a game where the design was essentially figured out. We could hit the ground running because VR was so new when we started. We started making the game before we even had our hands on the equipment, and there were a lot of questions on how it was going to work that weren’t answered yet. It was really great to get in on VR because we had never even seen anybody else’s game in VR, so we had to figure it all out. Like, “how are these interactions happening?”, “How do things translate?” For example, in the original game, there were different wheels for moving forwards or moving backwards, but we figured out that because it’s 3D, we can have fewer parts than the original game. The design was there, but there was a lot to figure out on how that works in a full 3D environment that you’re inside of.

On the artistic end, a lot of 2D assets had a 9-slice sort of scaling happening for shaping the ground areas. I had to figure out how to do a sort-of “27 slice” for 3D. I’d use Maya LT to make the initial objects and set up flags on them so that when we’re resizing in the engine, everything maintains the correct proportions on the bevels and we can adjust the mapping coordinates in the correct space. 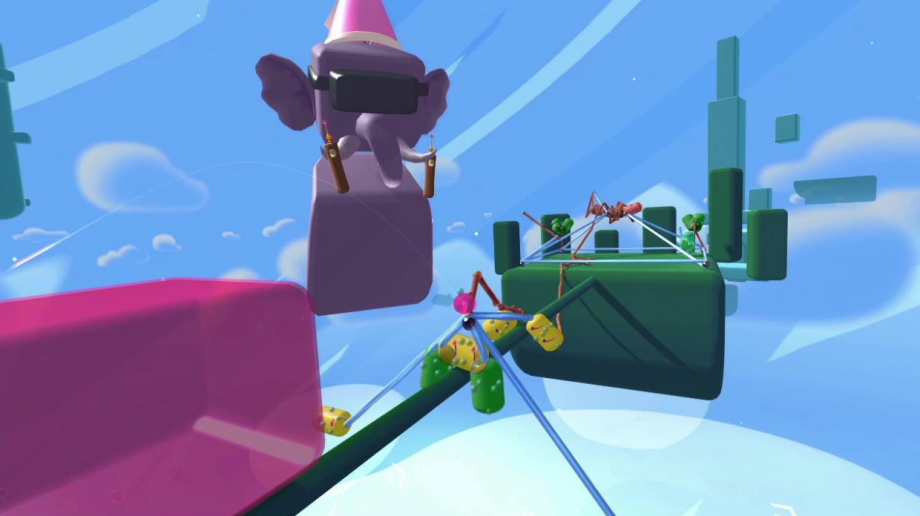 It was really exciting, it’s one of the last frontiers of figuring out how to make games. We’ve had decades of people making games and all the genres have been figured out. VR is so new. Everything was out the window and made from scratch. We still don’t exactly know all the answers. There are no established ways of doing things, and we could be on the leading edge in figuring some of these things out and hopefully affecting many other games down the road. Every time we do something we’re like, “I think this is kind of a cool way to do it, and I hope people pick up on this.” It’s really exciting to try and trail-blaze in a new gameplay medium.

You have to get used to forgetting that you’re actually in VR. There’s a thing in the game, a helmet that you put on your head to get to the menu system. Because it’s something that you’re putting on your head and taking off, as we’re first making this, kind of wanted to check taking off that helmet in game but accidentally taking off the headset by mistake instead and confusing what’s in your head in VR and what’s on your head in real life. That’s happened a few times, where people are like, “Put on the helmet,” so somebody reaches down in game to put on the helmet. Then, they’ll try and take the headset off before putting the helmet in-game on. That’s just kind of weird. 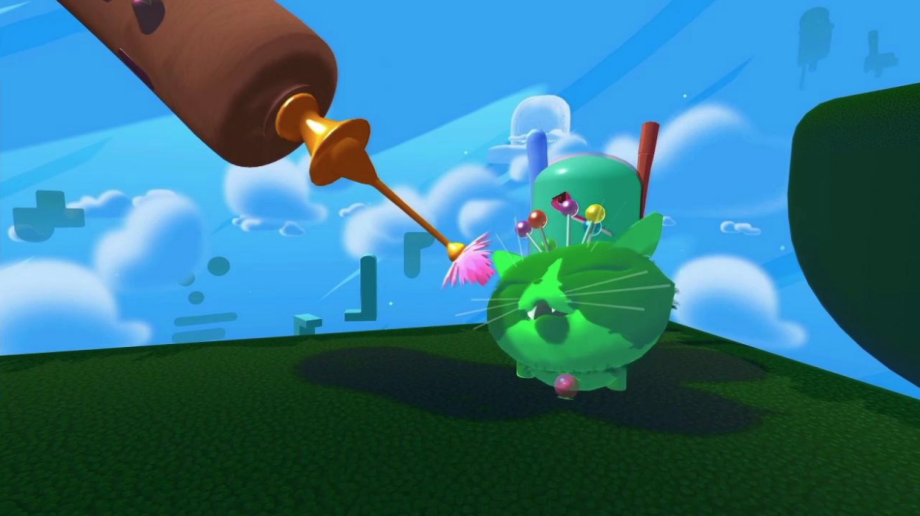 What were you trying to go for in terms of your art? Were there any strategic reasons why you chose that art style?

The original game had a level editor where you could make rounded rectangles and circles and build off of that. I started with the same idea in 3D, where pretty much a lot of the environment is based on regular geometric shapes. I know that as long as you have really well-done bevels on your geometry, it can really help sell it. Then, keeping that in mind, that allowed us to dynamically create the environment at load time and create a whole bunch of levels. That was kind of the technical reasons why the game is as it is.

We also wanted to keep it bright and cheerful. Being a puzzle game, you’re going to have to be in VR for a while. We found that making it a warm and natural-feeling place was really good for keeping a mood because it surrounds your entire peripheral vision. Drab, depressing environments are good if you’re shooting zombies, but if you want to be in a place for a long time and doing stuff, it was important to keep it comfortable. 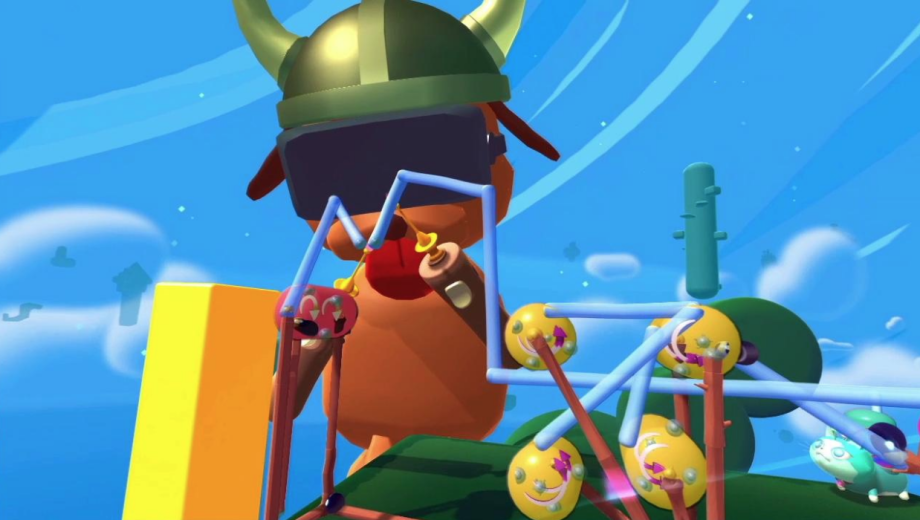 One mandate from the original game is it’s really easy for you to fall into a trap with a building game to go really stark and mechanical. The spirit of Contraption is to keep a natural and organic growth thing, so it’s kind of weird. You’re building these sticks and these jelly wheels all together and that’s your environment. That also inspired the toolbox. Your menu system is a green cat who floats around and picks parts off of it. It allowed us to go off into kind of a strange tangent. Part of the joy of the art is being able to do these weird and slightly impossible things. That makes being in an environment like no other that exists very interesting. Fantastic Contraption, Image courtesy of Radial Games and Northway Games

How did Maya LT help you? Was it enough for what you needed to do?

We stayed with Maya LT because we’re a small team and it was perfect budget-wise. For the needs of the project, Maya LT was perfect, because we could just create the modeling assets that we needed really quickly. We had a very short time frame to do everything in. Maya LT is a very established, no fuss, no muss tool to use.

What do you foresee for the future of VR?

I think 3D modeling is something that’s going to be very interesting to see developed in 3D. We’ve seen that a bit with Tilt Brush and a couple other programs on the Oculus. I think there’s potential in there. I’m really excited to see what comes out of those kinds of possibilities, especially as an artist!

Fantastic Contraption was made using Maya LT and the Unity engine. Start building your contraptions on the HTC Vive, Oculus Rift or PSVR.