Bartek Nowak discussed some of the cool techniques he uses during the production of his wonderful complex 3d weapons.

Bartek Nowak discussed some of the cool techniques he uses during the production of his wonderful complex 3d weapons. 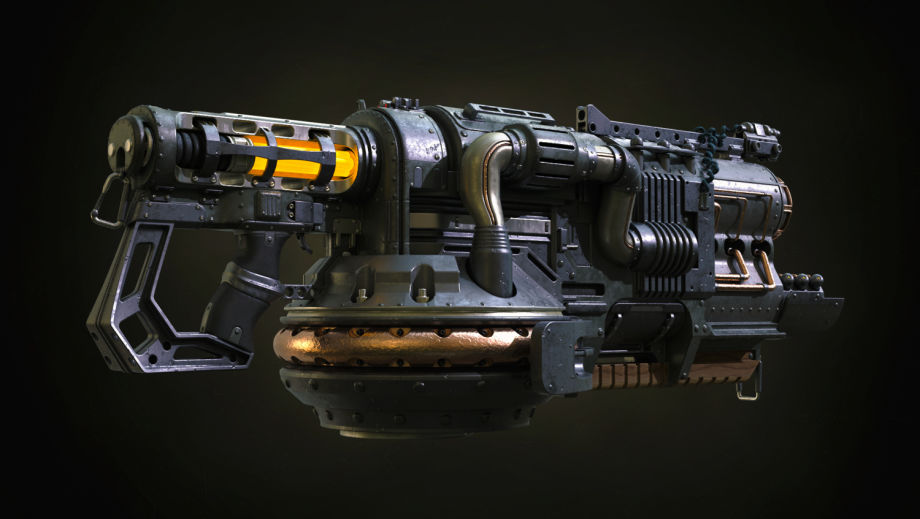 Hey, my name is Bartek and I live near Rzeszow in Poland. For couple of years I’m working as freelance 3D Artist, lately with the aim on game art. I’ve been mostly working with Indie developers, asset stores publishers and for some time now I’m related with company called Pixel Legend. We are building apps and games with use of Unreal Engine, Virtual and Augmented Reality. I studied IT at University of Information Technology and Management in Rzeszow where I learned basics of 3D – because of my love for games I developed towards game art. So generally I do not have art education but since everything now is available online, I have learned a lot from tutorials and streams. I owe a lot of my skills to guys like Tor Frick, Anthony Jones, and Warren Marshall. 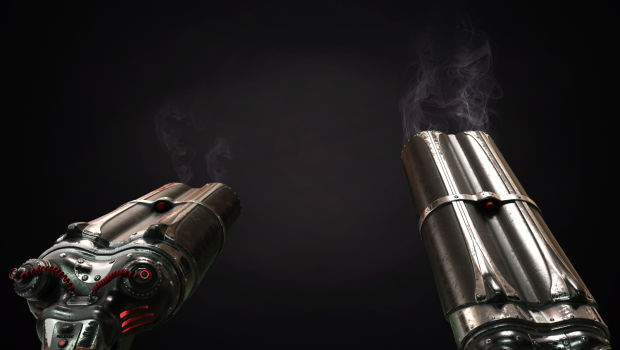 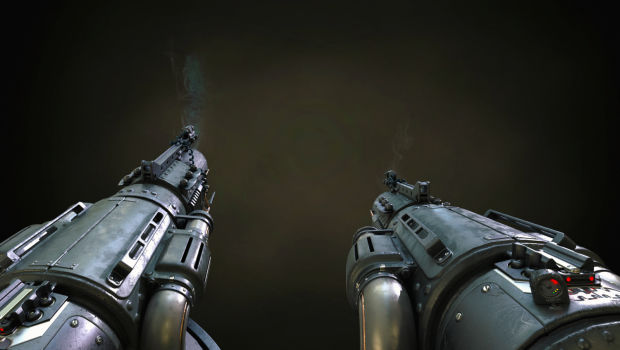 I try to not overcomplicate the first blockout, I think it is possible to know if it will look good only with basic primitives like cubes and cylinders (but I still have that nasty habit of starting detailing to early). I think the blockout is the most important part – there I can outline the desing, check shilouette and proportions. If it’s alright I move forward, part by part doing cuts, refining shapes, adding edges, small details like bolts, screws in obvious areas or removing them if its getting too noisy or overwhelmed. Also If I find something that does not look good/cool for me, I’m deleting it and starting over, even if its hard because I worked on it for an hour or more – no mercy rule – I think it’s much faster to start with new/fresh shapes rather than trying to refine the old ones.

I think that adding details to the ready blockout is quite fun to do – it is part when You can release the imagination and start using different tools to achieve your goals. MODO is quite elastic with it’s setup so with few clicks I can create things, edit them and use it as details, or as Surface for boolean operations – I like to use them on blockout to discover new main shapes. For smaller parts like buttons, knobs etc I like to search for references from real-world weapons or game concepts so they can keep their functional appearance. Its suits well for this kind of design, also I think with this parts there is no point in ‘reinventing the wheel’ so in my models I put small parts that are commonly used everywhere and don’t waste time on designing them from scratch. MODO has a great tool called ‘tack tool’ which is excellent for placing screws or bolts around model with just clicking on it. I also use mirror and instances for quickly distributing symmetrical details around the model. 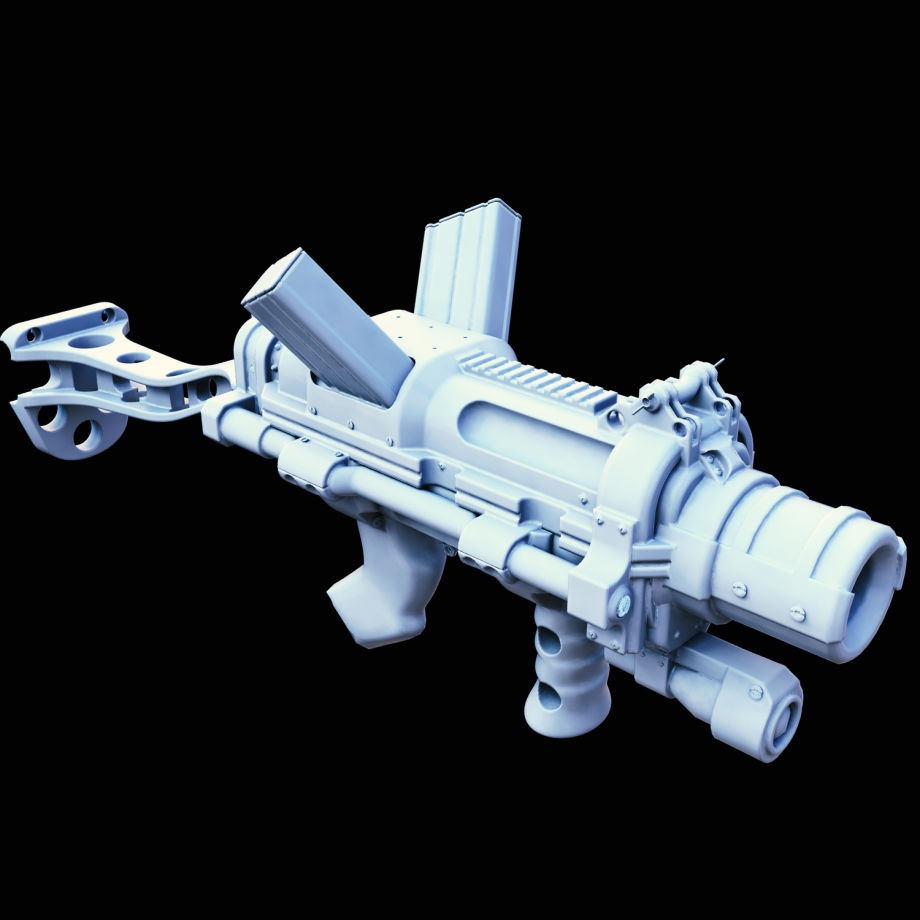 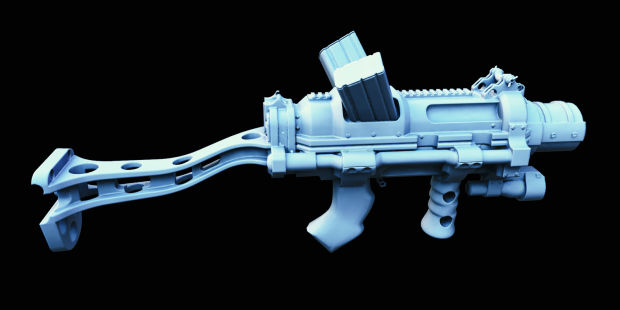 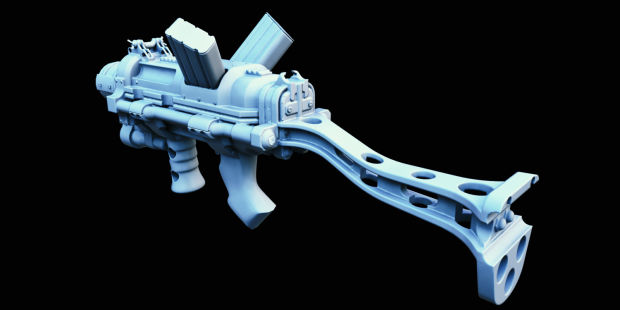 I think in that case, the main factor was consistent idea – I knew what I want to build from the beginning, there was very little parts and details that I’ve to redo or throw away. I also learned a lot doing FBB gun so I had very little ‘dead ends’ in design. Also I used some parts from FBB gun – so I didnt have to create them again, just drag and drop them. I think, that one of the factors to develop speed is to tackle your weaknesses, so I try to keep my notepad on, and whenever I found repetitive action, or operation that has too many steps, I writing it down and later I’m trying to create some macros or workflows that will speed up the process. I like to write down ideas/problems through week and work on them in the days off to speed up my daily workflow. Tried to do that everyday but it’s hard for me to remember new things daily, especially on the beginning where its lots of them. Week is good timeframe to develop muscle memory for certain actions. Also recording yourself during the work is great idea – it’s easier to spot repetitive actions or moves that slowing you down. 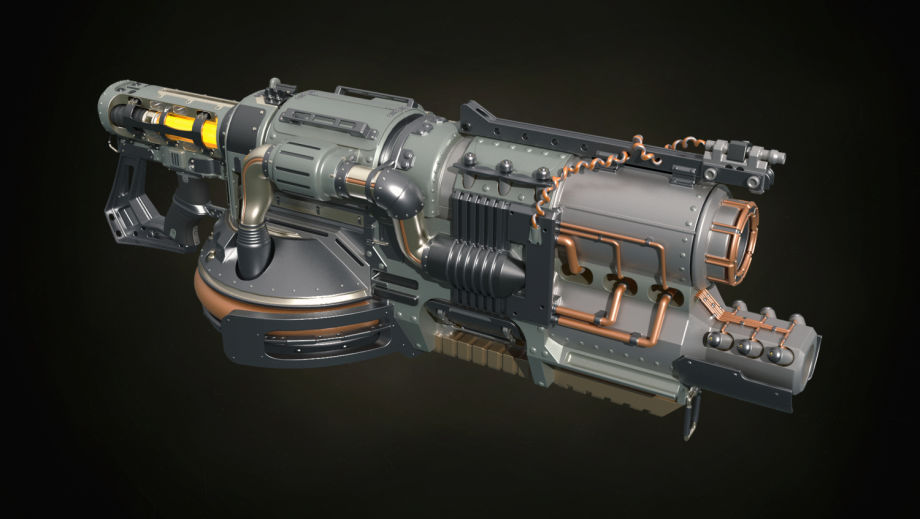 For texturing assets like that, I like to take some random, black and white grunges from web or personal library, adjust them in Photoshop with levels and use mostly as roughness maps in MODO. Same for diffuse/albedo textures for for example wood, or low-opacity dirt and I apply them using projection mapping. It’s quite easy, good-looking and much faster than creating UV’s. The cool thing is that if I want to make low poly of this ‘concept’ model, I can bake down these textures to low poly UV’s and use them as final textures or as starting point in texturing software like Substance Painter. I think this is very fast workflow for concepting stuff and for making game-ready models straight out of these concepts. As a final step after albedo/roughness, i like to add some simple bump/normal texture to materials but with having in mind what kind is this material (so I don’t have cement-like bumps on metal for example). All these techniques are straight from „Creating a Gun in MODO” tutorial by Tor Frick where they are explained much better. I try to keep my materials very simple – 1 or 2 textures per material so I can edit them fast, and avoid very long renders. 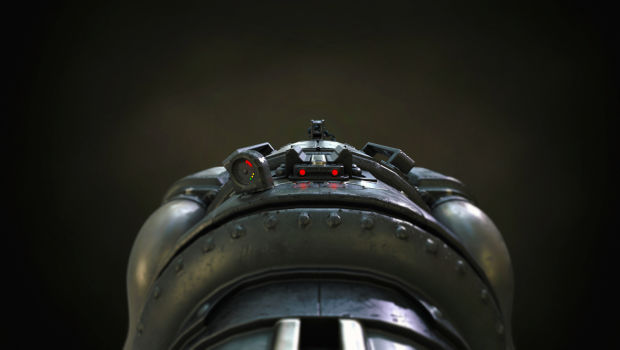 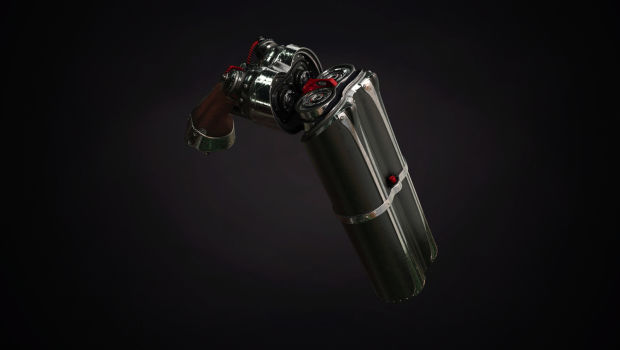 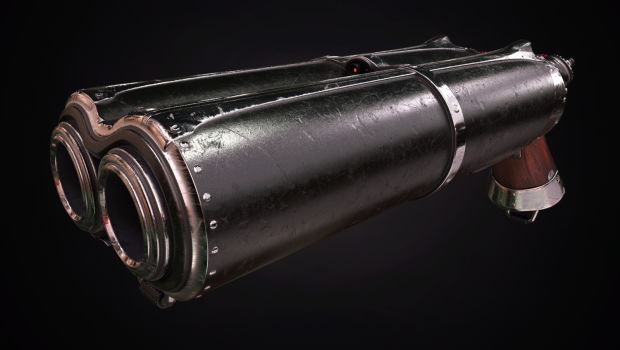 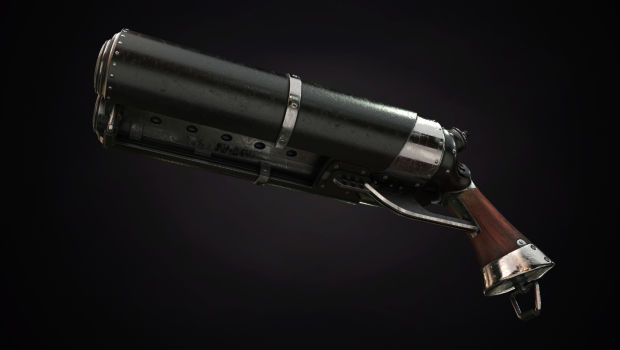 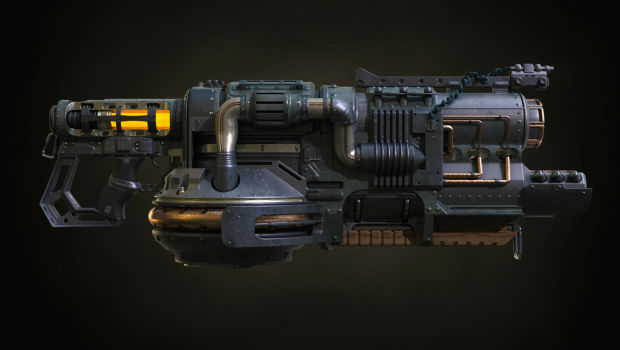 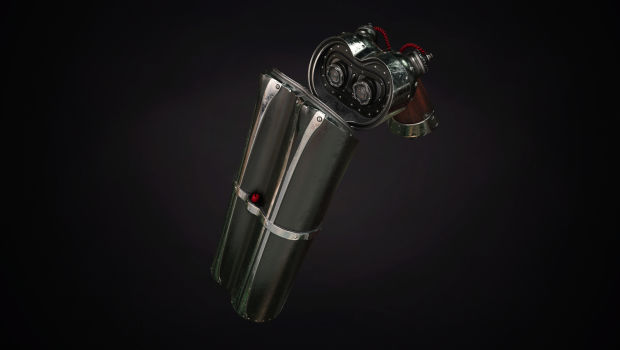 What do you think makes MODO so popular among weapon artists?

I think MODO is popular as much as any other 3D modeling software. It depends what you are used to, what are you doing and how do you like to work. I used to work 3ds Max in the past but after watching some Tor Frick streams and seeing how incredible and easy it looked to work in MODO I decided to try it and I loved it. It’s not that I’m doing something different now but I felt that in MODO it would be much more comfortable for me. I use it because it’s suits my needs very well, it’s amazing in terms of customization of the interface, fast creating hotkeys or context-specific hotkeys (that will work only in certain situations, for example only in UV editor), macros and even own tools. For hard Surface artists Rounded Edge shader is amazing feature – shading feature that smooths the edges of Surface based on its angle and Edge weightning technique. There are a lot more useful tools in MODO for game artists and artists in general, I use it for almost 1,5 year since version 9 and with every update there was something cool that was improving my work. Also it has an amazing community, there are lots of scripts (made by users – like Seneca scripts) and amazing tools like lately introduced MOP-Booleans Tool from William Woughan and Tor Frick. The last one is new for me but it allows to use interactive boolean operations, non destructively and editable at any point. It’s really amazing and powerful tool, that in the end I think will be a big part of my workflow. 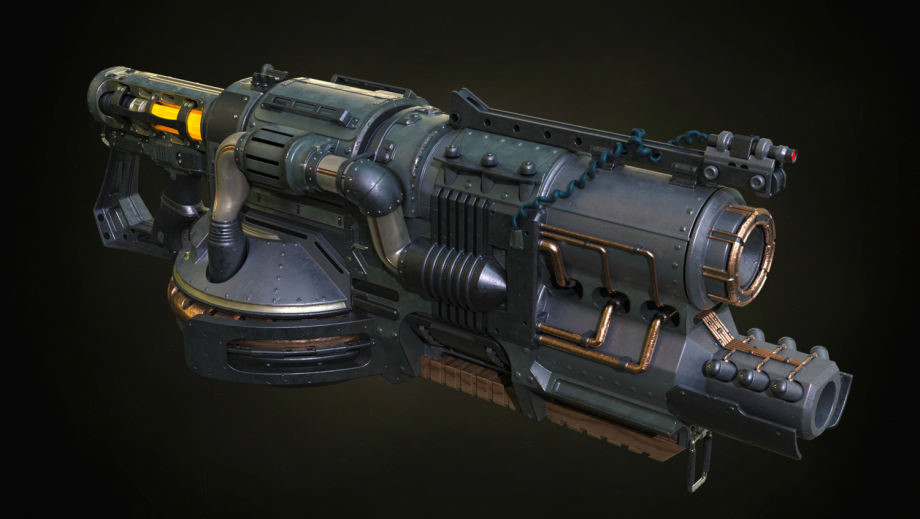 As I said previously I like to use very little textures, mostly for roughness, diffuse if needed and bump/normal. I think roughnes map is the most important to have ‘good vibe’/feel the material and it’s very easy to make it look bad so I try to spend most time working on it. 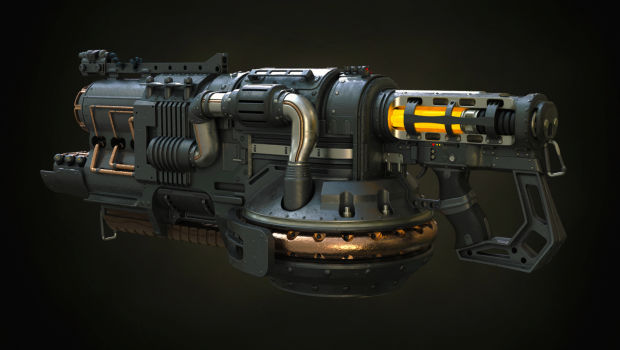 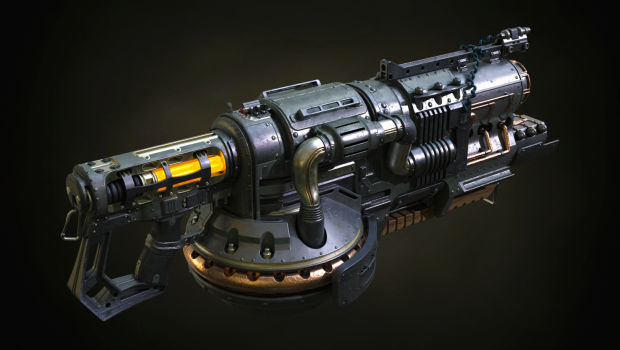 Beside classic side- and perspective renders I wanted to show how those guns will look in first person mode – how big and heavy they are in one or two hands (like in Wolfenstein). Since they are concepts I think it’s good idea to show how they can look and behave in action. If You making something like this for a client, I think it’s a good presentation since the player will look at this gun mostly from this angle. 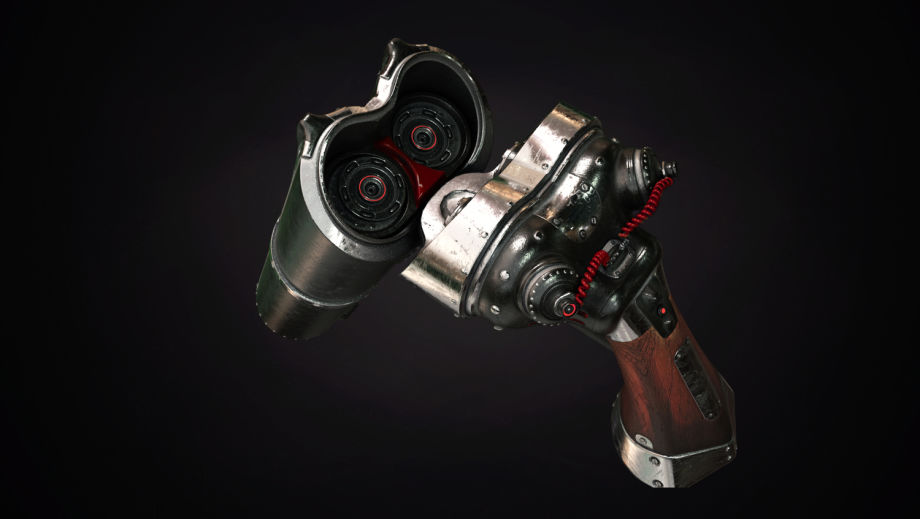