Sarah Menager did a breakdown of her wonderful cel-shading scene Fairy Fountain of Viviane made with UE4, ZBrush, and Substance Painter.

My name is Sarah Menager, I'm a 3D Environment Artist from France. I've been a very big fan of video games for as long as I can remember. This gave me the drive to pursue a scholarship in Game Art at Isart Digital Paris, from which I graduated 5 years ago.

After that, I've been mostly working on mobile, VR and simulation apps, as a freelance artist for various companies. Since I'm used to working with technical constraints, I like to challenge myself.

I always preferred imaginary worlds to realistic ones, and I've been training my stylized arts for quite some time now. For this scene, I wanted to do my best to narrate my own story with my favorite references and styles.

The main reference is The Legend of Zelda, which gave me the idea of the Fairy Fountain dedicated to the Lady of the Lake. I was especially inspired by Skyward Sword for the colors,  and I wanted to embellish that with a light outline.

It's only when I created my shaders that everything clicked together. At first, the shapes were more elaborate, but I slowly digressed towards a more cartoonish vibe, with very round shapes and flat colors. I've done a lot of research for all kinds of things that aren't related in the slightest, except for the shapes.

I chose a base for each color and also took a light & dark tone. This was all I needed. 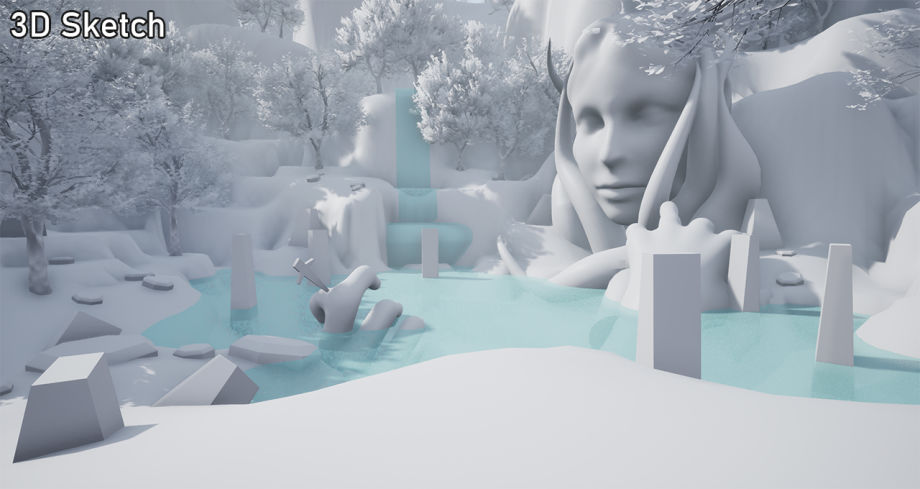 World of Warcraft was another big reference for me since there are so many incredible and magical places you can find there. It's always teeming with details and colors, and the vegetation is fascinating. 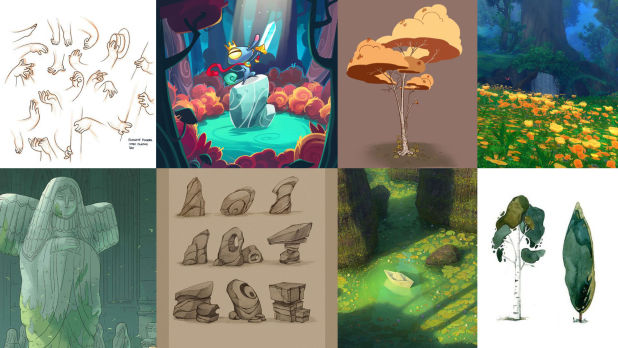 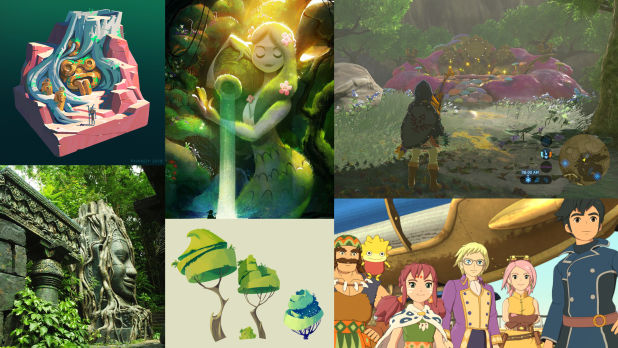 I started by separating the props into 3 categories: big/medium/small. I worked on the rocks first, because they are the sharpest, roughest props, and if I was able to soften those, then the rest would follow easily. I had to redo my rocks multiple times in order to reach the result I had in mind, while I was searching for a good match between shapes and shaders.

I wanted to make my props as bas-reliefs. After finding the correct modeling approach, I did some silhouette research and tried to apply the same level of detail on every prop (except runestones) with the same brushes. If I ever had doubts, I would simply do a ZRemesher and import it into Unreal Engine to check the result.

I used ZBrush for the medium and big props, and Maya for the small ones. There are actually 28 props in this scene.

The most challenging aspect was to reach the balance I was speaking of above. Aside from that, there were also the hands of the statue. Not only has it been a while since I modeled characters, but they also didn't have any phalanx! 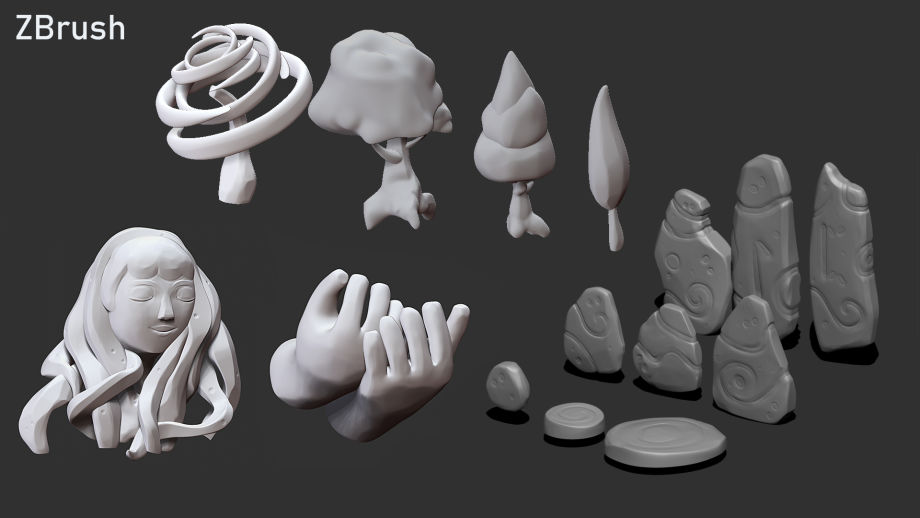 The idea of the pipeline was to have the minimum amount of details in the textures. At this step, my Unreal Engine post-process and lighting were already definitive, so I could choose a base color for each type of props. Speaking of which, you probably noticed blue tints on everything, it's due to the cel-shading and the fog. 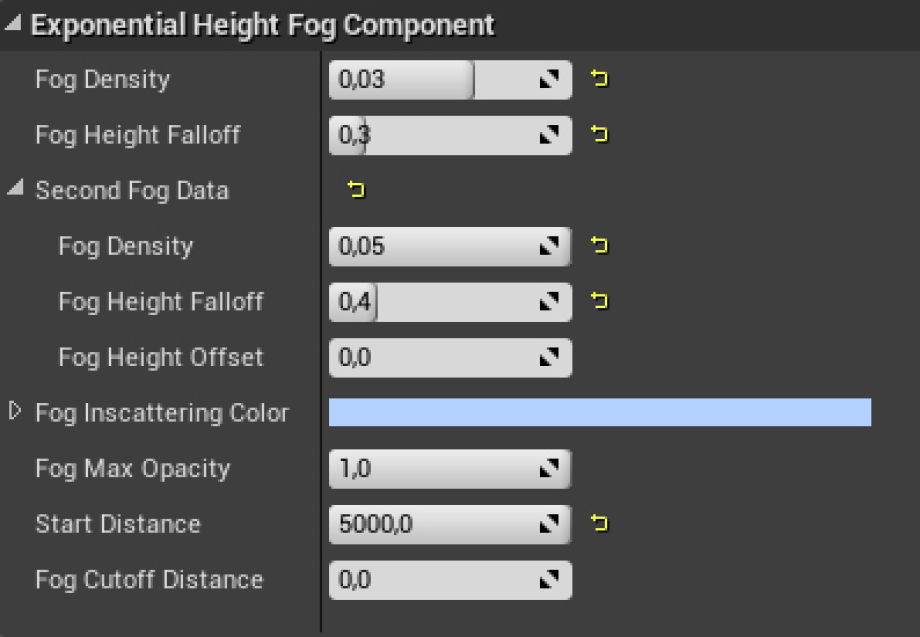 I really like to work on my colors and spend a lot of time on it. Here, I wanted something calm and quiet, stuck between dream and reality.

After laying out my base, it was time to play with Substance Painter! As mentioned before, I wanted only 3 shades of each color. Thanks to the bake of my high polygon models, I was able to use smart masks with the Ambient Occlusion and Curvature maps information. 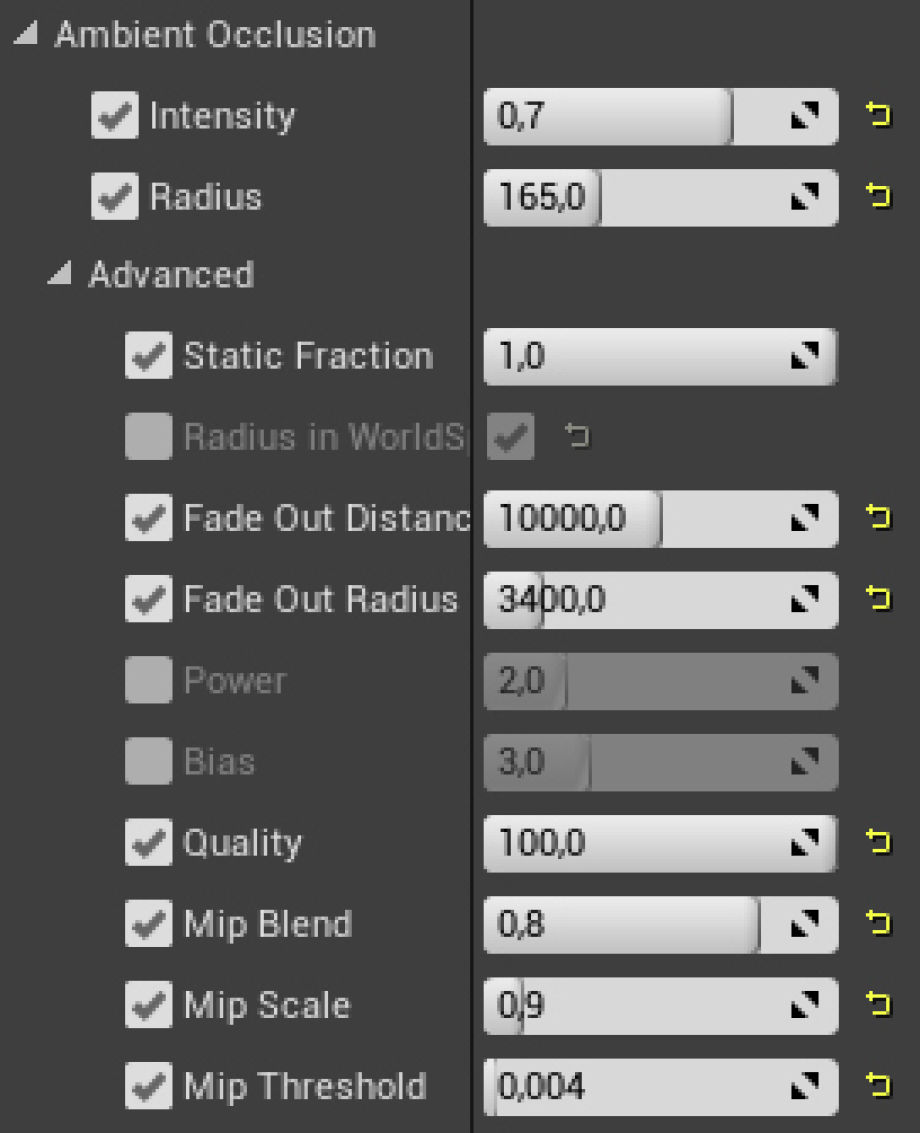 I wanted to obtain something really rough for the light and dark tones and I used a specific type of preset on my smart masks that would be able to work on each prop. This was enough to go with the cel-shading. 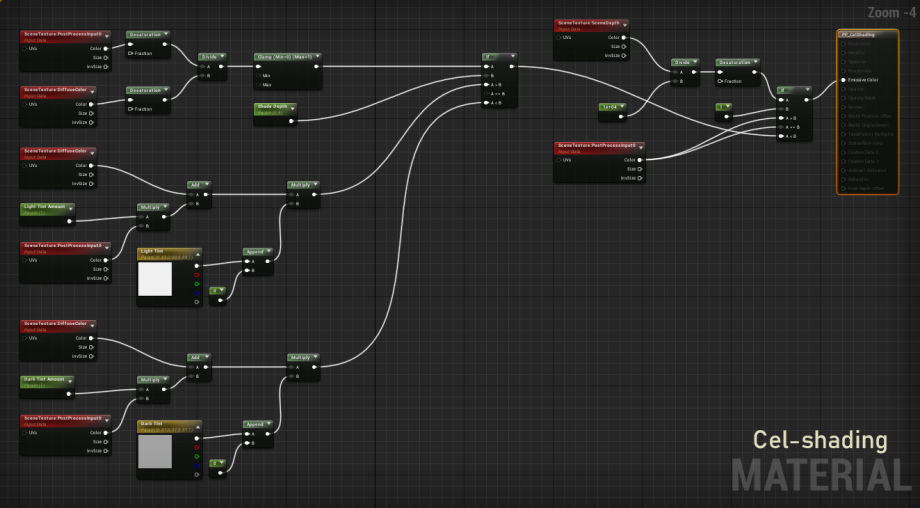 Most of my props have round shapes in order to project smooth shadows on and beneath them. I studied cartoonish cel-shading games like The Wind Waker to understand the significance of good shapes.

I'm not a big Tech Artist, so I had to search for some videos and articles to obtain the results you see today. The soft thin border is mainly due to the props themselves. I kept the Normal to reinforce my moss effect and cel-shading. 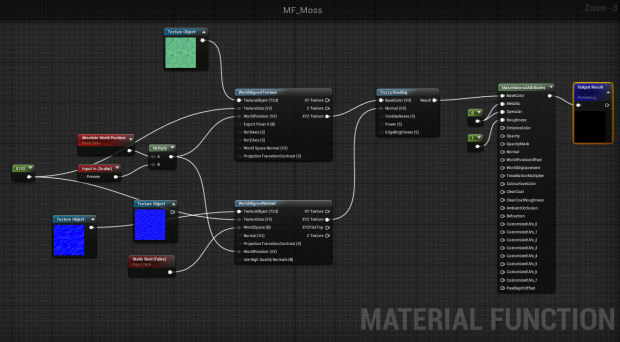 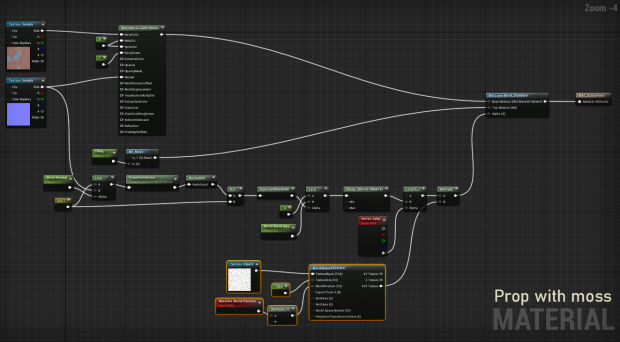 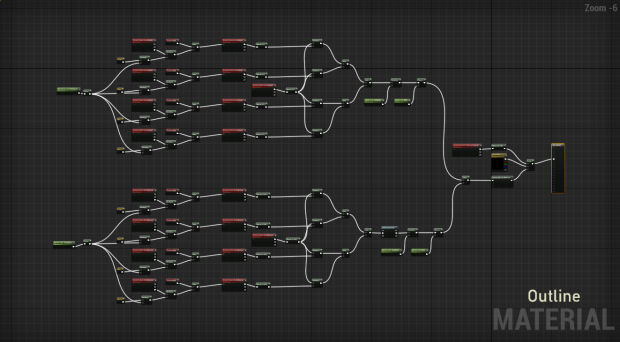 The way lights impact the props varies depending on its brightness, so I chose white to have the thinnest shadows possible.

First, I told myself a story.

This is a place that exists, but where no one goes anymore for a long time. To illustrate that, the entrance is very narrow, surrounded by trees. There's a path barely visible, covered in plants except for a few spots. The stone path wanders in the waters, and even the platform meant to support the hero while he pulls out the sword is gone. Near the statue, the place is still preserved by the Lady of the Lake's Magic, who awaits the hero to grant him the legendary sword.

If someone were to come, I didn't want him to feel smothered or trapped by this place, so I have circular shapes around my lake to indicate that it IS a dead end, but without feeling blocked. The green opens up on the blue, and it's only farther away on the hills that we have warmer tints.

I started by creating the terrain and positioned some placeholders on it. When I was sure of the position of the lake, which is the heart of this scene, I finished the terrain work.

The most challenging aspect for me here was to make a credible environment that could be seen in an MMORPG such as World of Warcraft. The terrain heights and flora were the main aspects that I studied.

Usually, I use a lot of different lights for my scenes, so it was a nice change of pace to have less this time. For the first time, I didn't have to bring colors with the light, only shadows. All I had to do was to choose the direction of the light to enhance the scene but it wasn't enough. So to strengthen daylight and give a more watercolor feeling, I added a Sky Light. The Point Light used for the statue's face is there to make it look more present and alive. 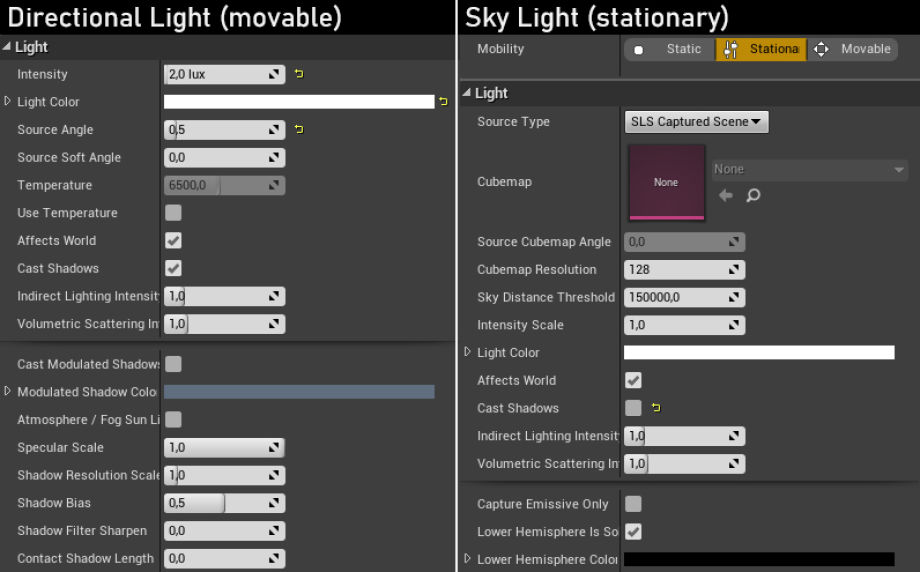 I'm a perfectionist. I like to tell stories through landscapes and environments, just like others would through characters. Listening to music while working helps me to visualize certain things, and keep a balanced mood for my work. Here it was Zelda BotW and Octopath Travelers OSTs.

Ever since my graduation, I give attention to every little detail when I'm working on something. I want to be able to deliver scenes that can be appreciated by people who look at it in a global way but also go the extra mile for people looking for small details. I probably do that because I've been enchanted multiple times by the teeming details you can find in forests, for example.

Of course, that involves a large amount of pre-production before going to the next steps. I believe that if you have all the elements ready, from the story to the smalled plant, you can achieve a cohesive result.

I hope you enjoyed my work and thanks for reading!