Hello, my name is Atilla Ishi and I am a 23-year-old graduate from De Montfort University, UK. Here, I will share with you my workflow for the project Ottoman Turkish Coffee House. I started doing 3D modeling at the university and I haven't had any work experience yet. 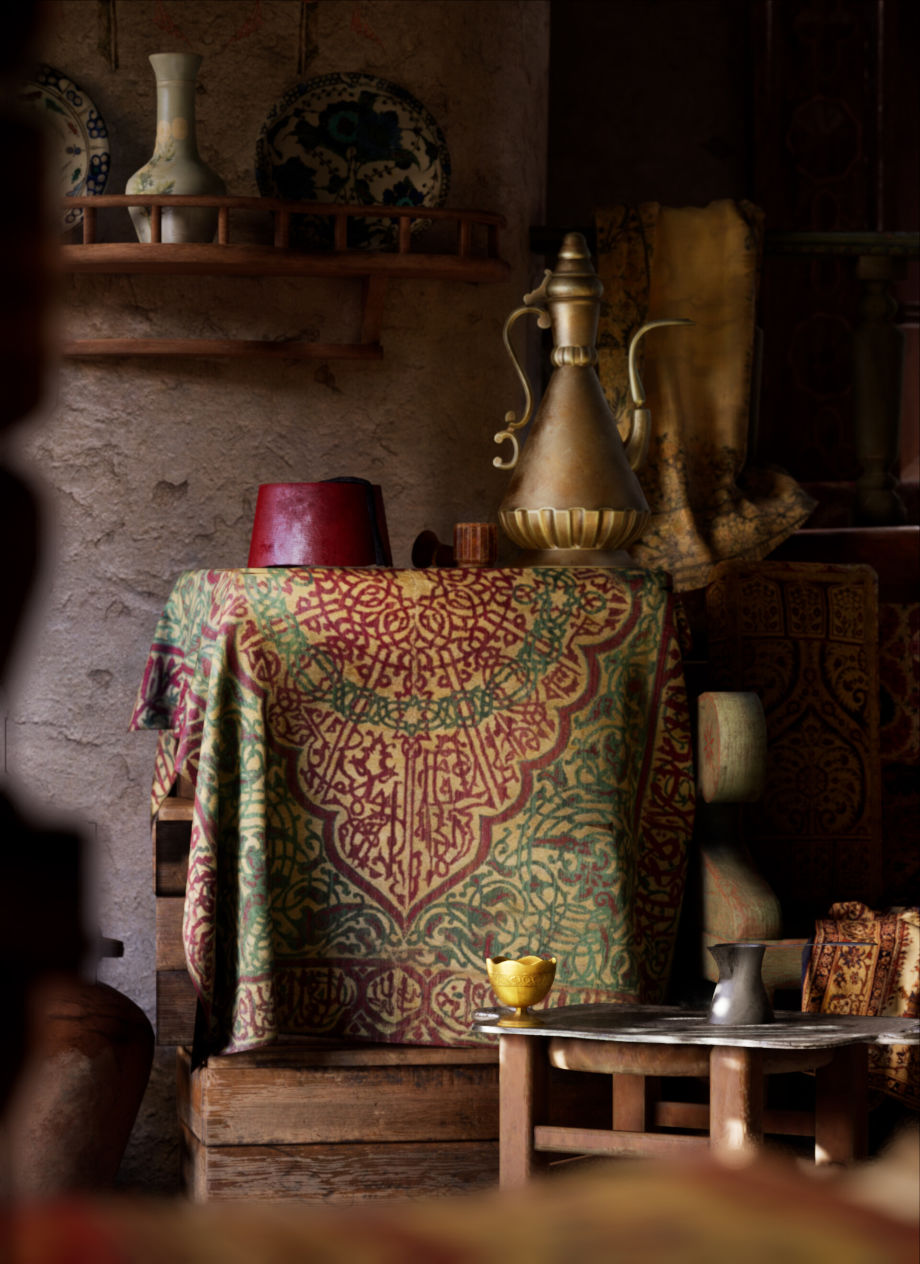 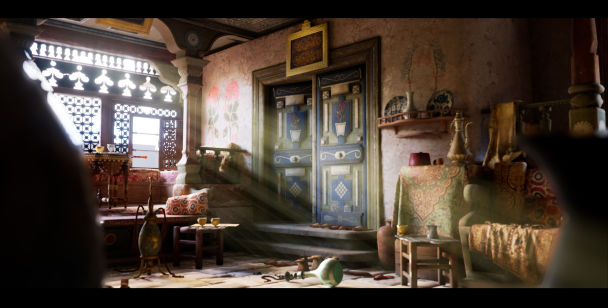 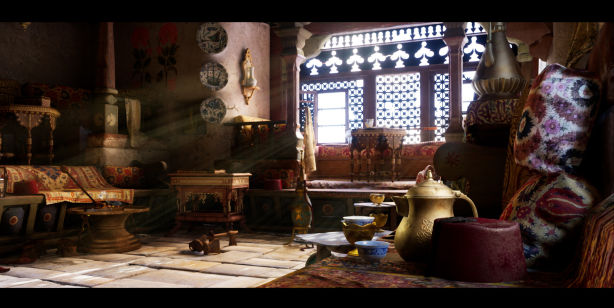 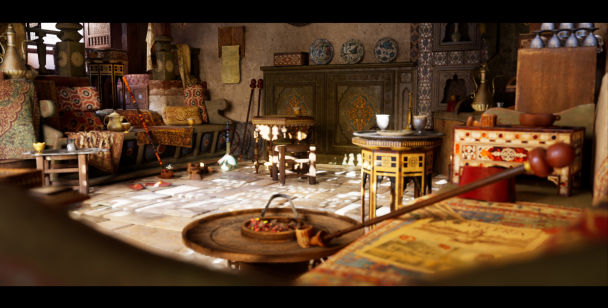 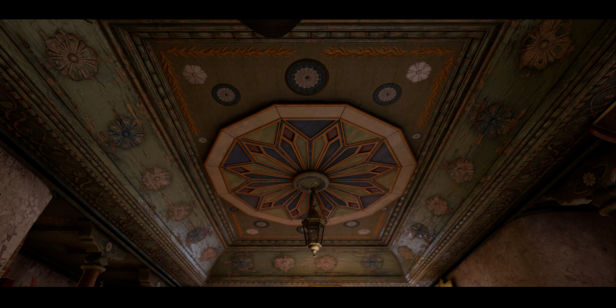 For this project, I decided to create a coffee house set up in 19th-century Istanbul (Constantinople). I was inspired by Orientalist painters like Rudolf Ernst, Frederick Bridgeman, Paja Jovanović, Jean-Léon Gérôme, Eugène Delacroix, and others. Their work encompassed the quality of textures I aimed to achieve and the atmosphere I sought, so my hope was that they would provide the right inspiration and reference points for my project, although most of them were set up in Egypt. I personally liked Arabic and arabesque elements, but the desert look did not sit right with my project concept in the end. I wanted to capture the static and old-fashioned atmosphere of European Turkey. I was in Istanbul one year ago and was really amazed by its cultural heritage. In the 19th century, the Ottoman way of life was multicultural, especially in Istanbul (Constantinople), and included a lot of western influence. The contrast between Victorian-age Europeans and the Orient was so big that it created interesting pictures to observe. Western banks and trading companies were present at the time and that influenced the Orientalist movement. I wanted to represent the combined version of Islamic and Western art in my coffee house with the vibrant European climate of Istanbul. 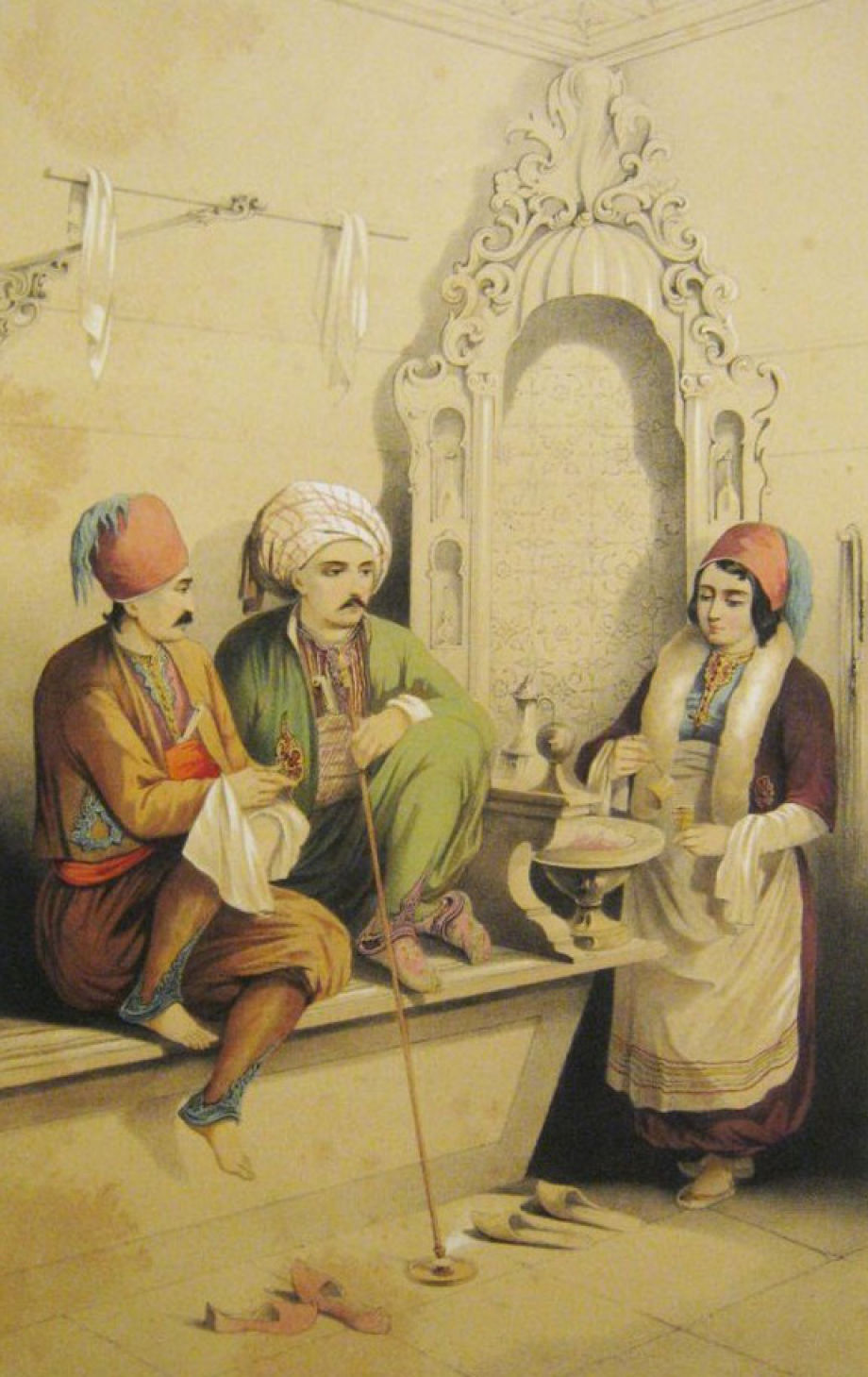 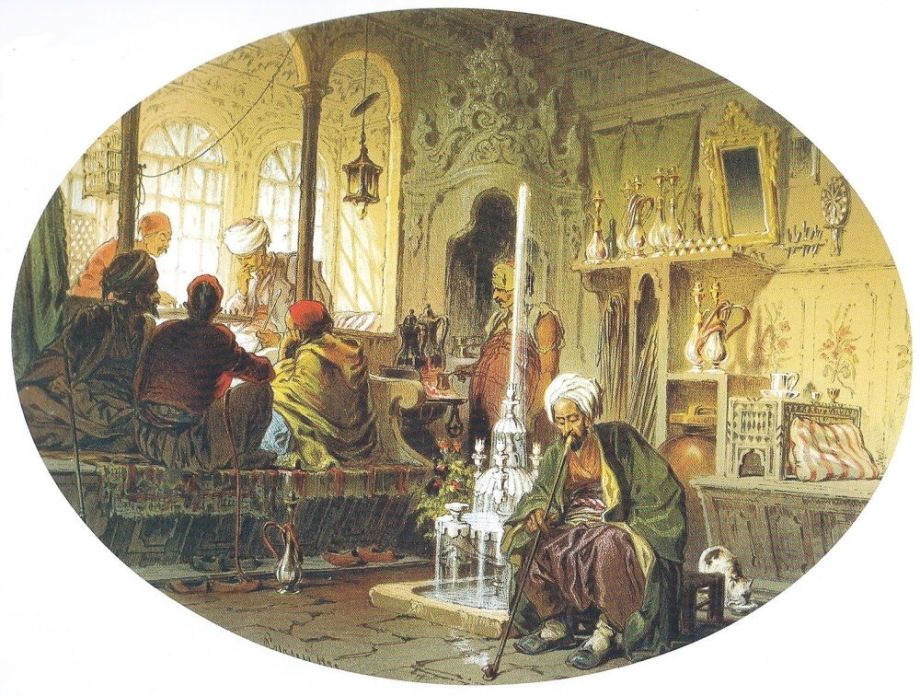 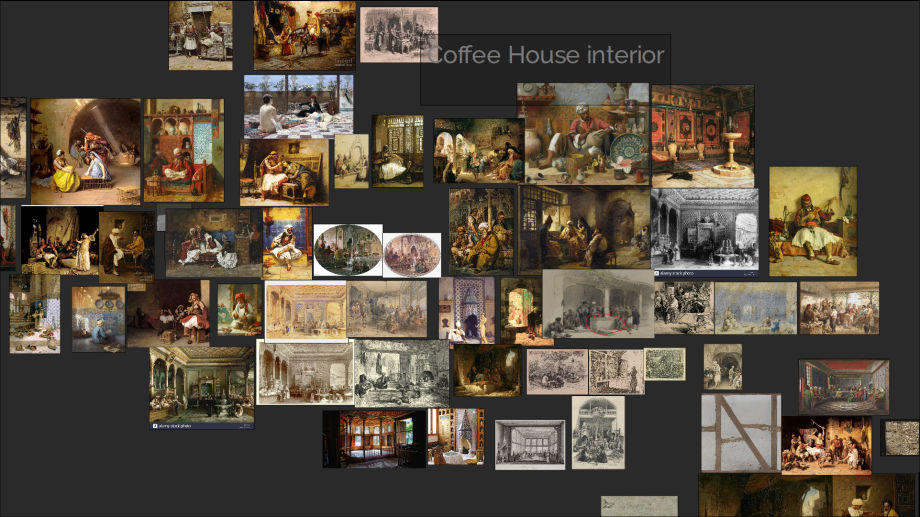 My project started with the blockout phase, which was a little bit disorganized and chaotic since I was trying to find the right scale for the room. I didn't want to create a room that was way too large (in most of my reference images interiors were large) or end up with it being too small. I stuck to a more normal-sized room, with a feeling of a VIP place.

I decided that a trim sheet would be useful for creating a lot of ornamented props such as columns or wooden panels. I didn't want to create modular pieces for walls but I made a lot of other structural assets that could be reused. I kept searching for more references for my cinematic shot angles and then positioned the cameras so that I knew what assets I had to create later. 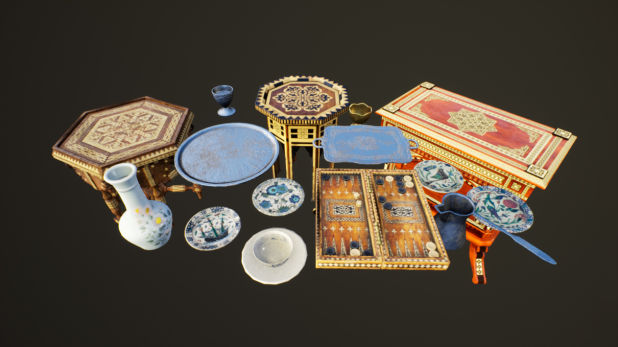 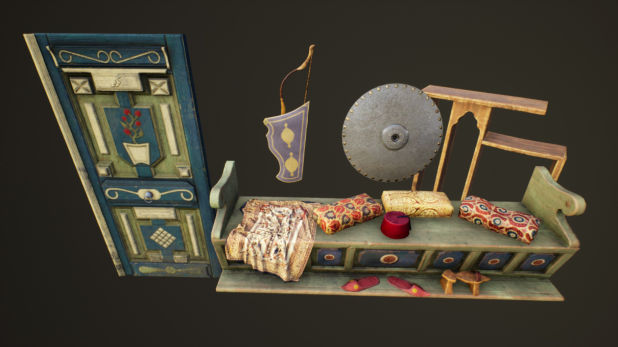 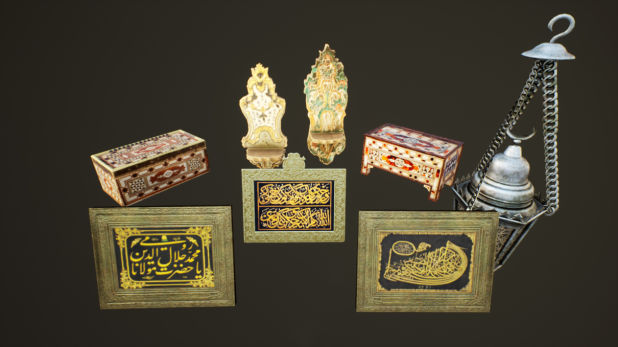 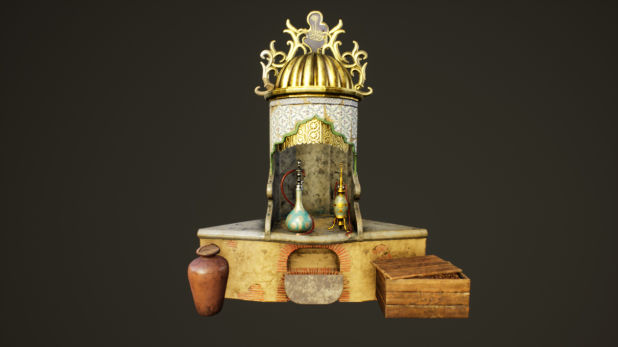 The texturing part was quite tricky because I had great references that I bought from a historical archive. However, I couldn't use the pictures for extracting details so I started searching for Islamic geometrical patterns on Pinterest. I found a few really good images of a series of patterns that looked similar to what I saw on the assets. I decided that some of the props should be textured without patterns so I could use them as rest areas. Color-wise, I wanted the scene to have noisy warm colors and for some of the larger assets, I planned to use cold colors that would serve as rest areas. 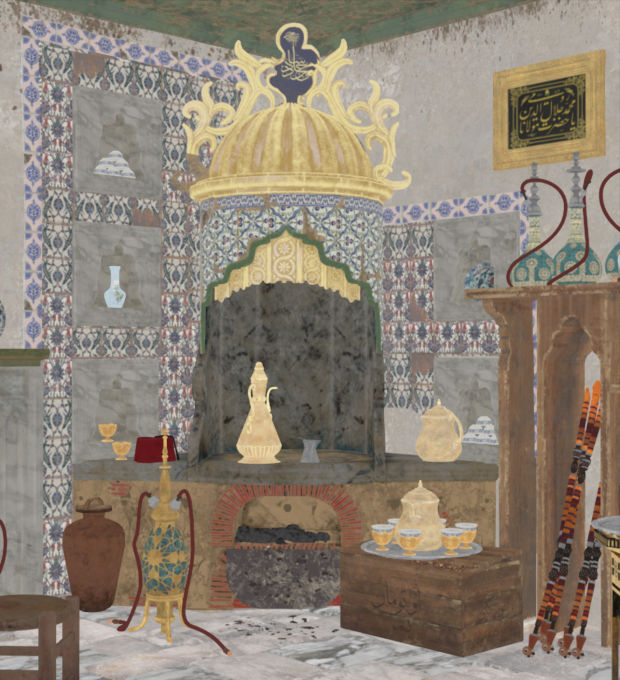 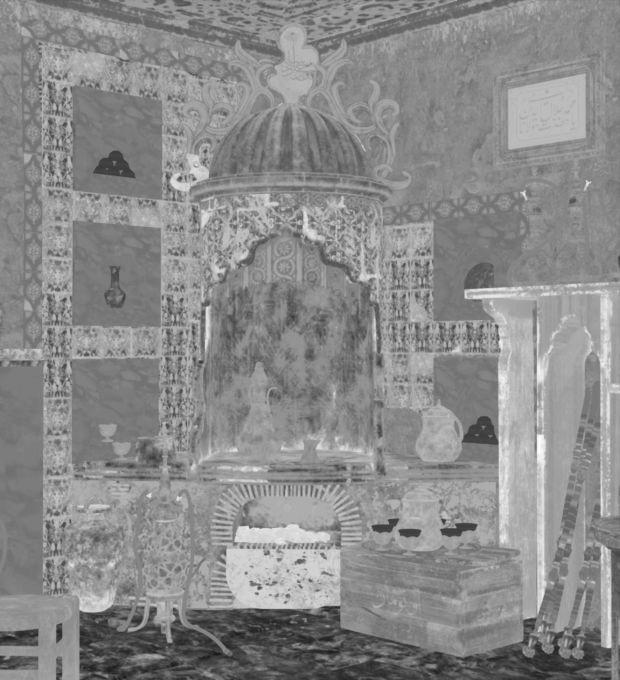 I mainly used Substance Designer for baking my tileable textures and making tiling images with Make It Tile node. Other useful nodes are generator nodes such as Edge Wear and Dirt. In SD, I also modified Quixel imperfections adding roughness variation with Levels node, Histogram pass, Histogram Scan, Highpass, Blur Grayscale, Directional Warp. I masked with Color to Mask node using my baked ID map for some of the tileable textures. 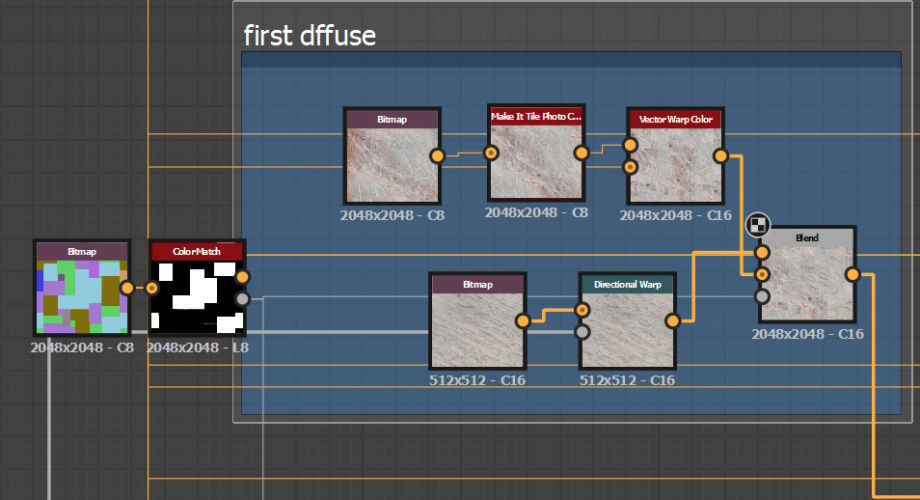 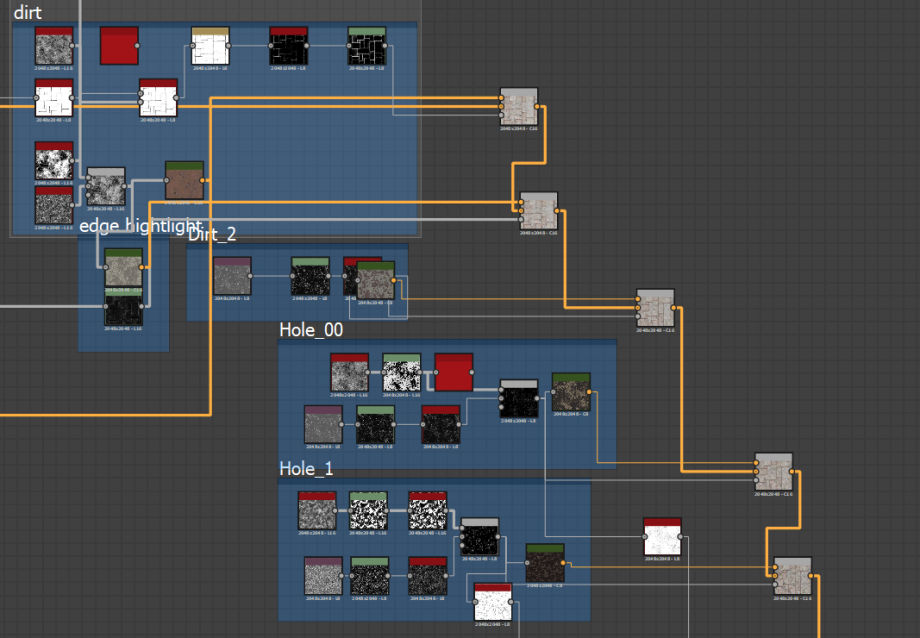 I wasn't into fabric simulation before this project. After some research on how to create realistic fabrics, I decided to gather good reference and photo resources. I used Marvelous Designer for simple simulation and afterward, I create a low poly model over my high poly simulation. I used a carpet normal map from Quixel and painted diffuse from a photo with the stencil in Substance Painter.

When I was creating individual assets, I had a unique modeling approach to each of them applying the pattern pictures I gathered previously with simple tricks. I used Photoshop with the color selection tool and created my alphas, then utilized the stencil tool in Substance Painter. 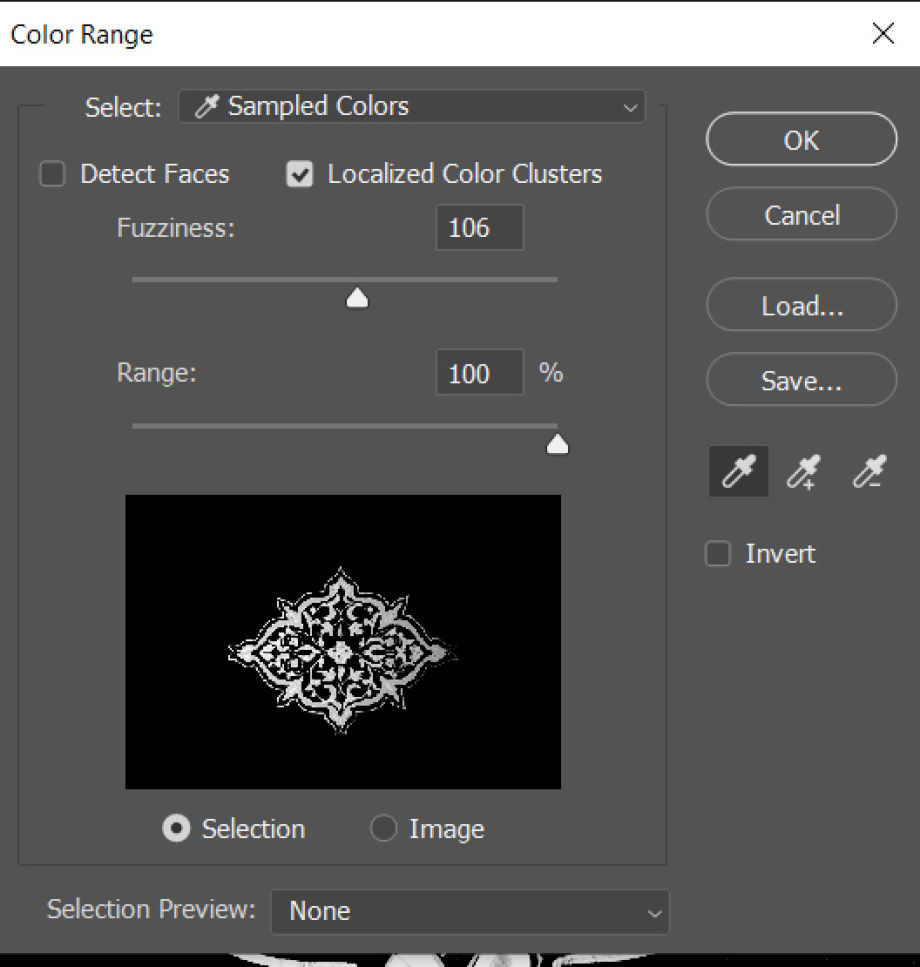 Several patterns were also used when I was creating some of the high poly meshes in ZBrush (also applied with the stencil tool), especially for cylindrical objects. In ZBrush, I used Spotlight painting with RGB so I could mask details and afterwards inflate them (Deformation tab) to create complex shapes over some 3D assets saving time and effort.

Then, I created a simple shader in UE4. 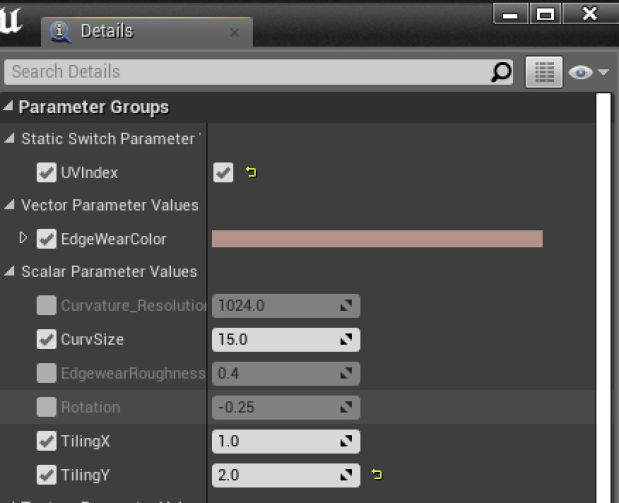 1 of 2
I bought MF_Curvature from Kristof Lovas’s Gumroad and used it for adding edge wear color and roughness. That function takes information from the tangent space normal map and generates a curvature map. It is useful for adding detail to some assets that have tileable textures.

Since the beginning of the project, I kept lighting in mind. It is crucial to create impressive lighting in order to recreate the mood of the time. I wanted to achieve the mood of that era using eye-catching shadows from the window. I used a simple lighting setup with one directional light and a skylight. I had an issue bringing enough light into my scene so I had to set up my cinematic cameras with different exposure settings. I also asked for constant feedback from lighting artists because this is the part I struggle with the most. I didn't use ray tracing because I created this in Unreal Engine 4.21. 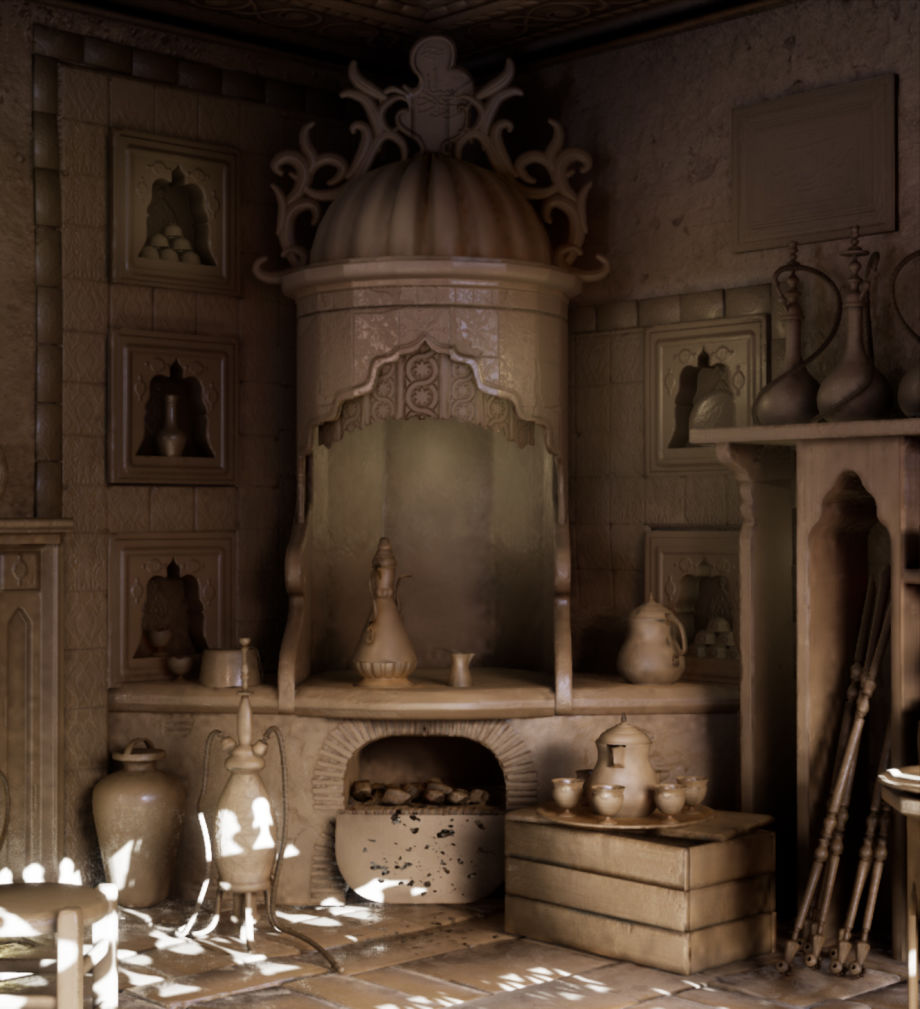 I learned a lot during this project, especially about texturing and modeling different assets. I had quite a lot of issues with creating the design of the coffee house that would look appealing for the 21st-century viewer while trying to stick to historical accuracy. The most challenging parts were lighting and composition. I decided to remove some of the assets from my scene after feedback from friends. My interior was overcrowded and there wasn't any empty space for eye rest. In the end, I was happy with the result but I knew that I could do a better job at lighting.