Veteran animator and 3d artist Mikhail Chvalun talked about his experience building high-quality animation short. He talked about some of the things he managed to do with the engine and described some of the features that might make UE4 even more interesting for the animators. 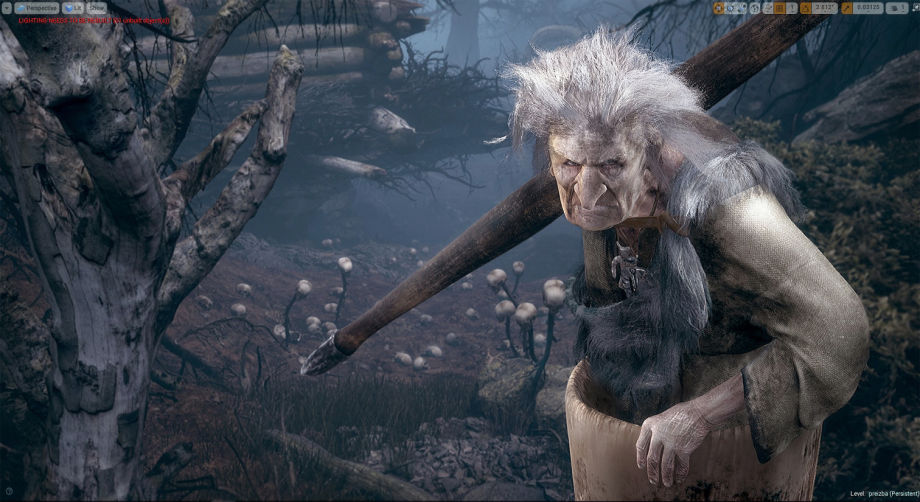 My name is Mikhail Chvalun. I’m 52-year-old 3d artist from Moscow. My path to 3d art was quite unusual.

Since 1996 I’ve been working on different design projects – TV, films, polygraphy, mostly working as concept artist or turning 3d stuff into architecture, scenery and other things. In 2007 I started doing animation in 3ds Max and C4D for some commercials. Then in 2014 I lost the job due to my illness and disability, but kept working, focusing on 3D for my own films. Nowadays independent art gives you lots of possibilities.

Traditional 3d animation is doing really good. Not in Russia though…

As for animation tools, making UE4 free for independent developers and artists was a huge step. Maya and 3ds Max are good too, but these tools require more power. Surely, compared to Maya, UE4 lacks some parameters for working with movies, but combined with post-production it can give you amazing results.

It’s all about your tastes, but UE4 is evolving rapidly and it might be only a matter of time before it’ll give you all the tools for animation work. 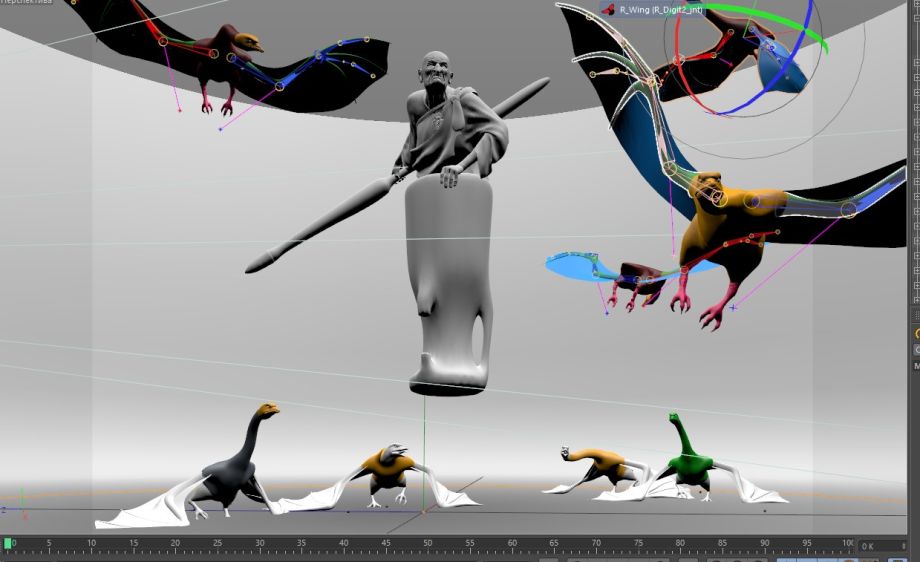 My UE4 animaton short isn’t something new. My idea is to tell Old Russian tales with modern tools and animation. It’s not about commercial result; it’s just something I want to do. 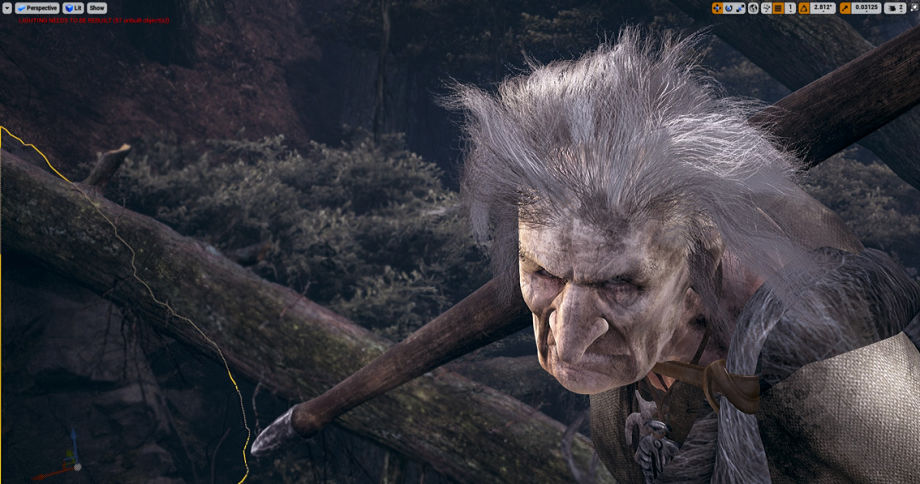 Amazed by UE4 possibilities I dived into learning the tool in 2014. I needed some basic tools. At that time I got a chance to try Spedtree’s SP Modeller demo for UE4. EmptyLands and Keltica were my first UE4 projects that taught me a lot. Unfortunately one can’t know everything. As a designer I could create a scene, but my programming skills were not good enough, so I had to learn.

No matter how cool UE4 is, you still need MoCap, sound, code and other stuff. Having a good scene is not enough – you need money and people. That is why my possibilities formed the idea. I had no money for MoCap and I found another solution. Basically it’s a project with no animation; a project with stop-motion and flying camera. It’s like a frozen tale now.

The most important elements are the right topology, ideal rigging and good mapping. There is no animation without these.

It’s all about your idea and concept. But I skip this part and start right from the production. I could do some concept art, but this time references or some photos are all I need. One of the tricks here is to sculpt ready model – I try skipping retopology. That can save you a lot of time. So, I take some basic model with right lowpoly topology, build its shape and start the sculpt. 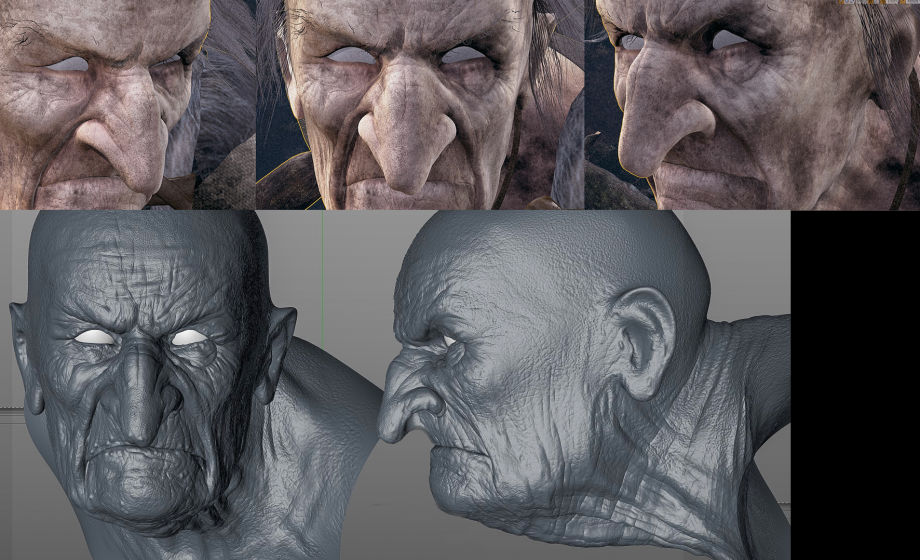 C4D can give good model for your UE4 needs, but it’s not that good with mapping and retopology, while 3D Coat is perfect when it comes down to these tasks and Substance Painter along with PBR can give you awesome textures. UE4’s node structure is good for textures too compared to C4D. Substance is all about tiny details and unique textures.

UE4 lacks full rigging, which can make things difficult. You have to work on your animation with other tools and then use it in Unreal. It can get pretty difficult, especially when working alone. You have to multitask.

For example, when creating environments for EmptyLands or Keltica I just had to create the right atmosphere, making sure the scene works from all the angles.

When working on a film you can stop worrying about your fps and create great highpoly assets for a better quality.

You have one angle, so you can focus on that and think about your composition. This way you can use any number of assets with easier rendering and your final scene can be so detailed! Quick build is awesome too – you always see the result and the way your camera moves.

This project’s details depended on assets from Kite Demo and the ones created with Speedtree. I’ve also used some UE4 stuff like texture paint. And of course lightmaps. That was the main challenge as most scenes are filled with overlapping and complex light with fog. In the end, post-processing, some tricks and other seemingly wrong solutions give what you need.

UE4 will be perfect for animation when it’ll get its own full rigging. We need something precise with more features, like the ones in Maya and After Effect. It also lacks full-fledged GI. It is needed anywhere, especially when it comes to animation, movies and 4K or 8K projects. This would make UE4 a marvel!

I haven’t tried Sequencer yet. The project is built with UE4 HairWorks 4.9.2, which is great with hair, but not that great with Sequencer 4.9.2. Matinee is great once you get to know its features. Still Sequencer is the future here – it’s easier to use, especially for those using video editors like After Effects. 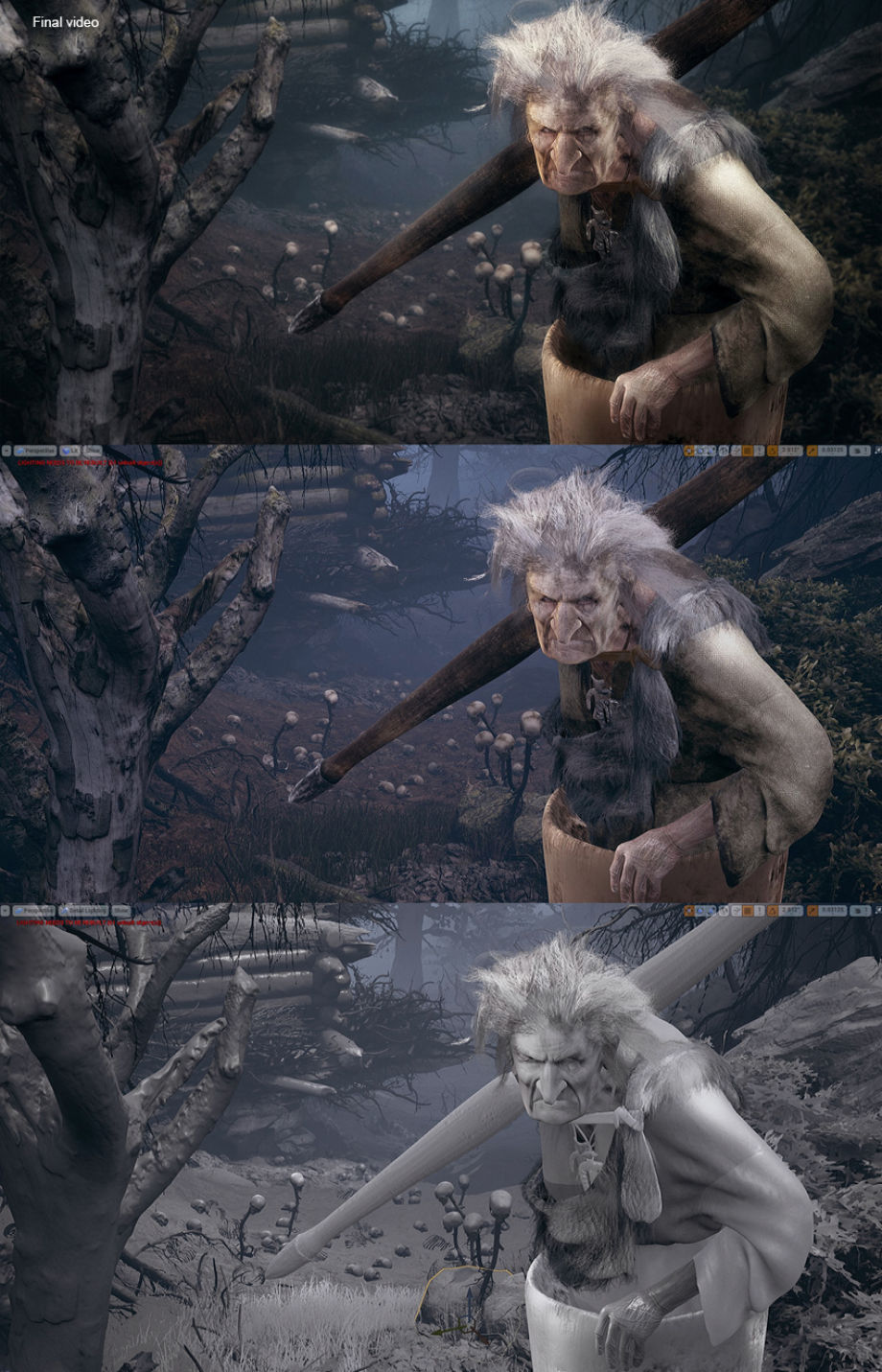 I haven’t invented anything new here. It’s all been studied by the community. There are tons of solutions posted by different artists.

Still, without GI you have to use some tricks, especially for your night scenes or scenes with complex light and fog, adding several sources or even coming up with seemingly wrong solutions. For example, to get the right indirect light I had to minimize my main light, adding some spots for a better picture. The thing here is that UE4’s flexibility always allows you to find the right way.

Every scene has the right solution. For this one I used static light while backing maps. Fog made me change my light setup, play with AO, LUT and post-processing, but the engine always gives you all the tools.

The right fog or some other effects always add to the atmosphere, but you have to know the limit. It the end it’s still about your story and idea. Your visuals become the way of telling the story. Atmospheric Fog and Environment Fog might make your picture beautiful or you can use additional VFX. It all depends on your taste.

My project is not finished and I have lots of work ahead. With UE4 evolving, I might come up with better solutions until I get the final result.

HOW UBISOFT REVOLUTIONISES ANIMATION IN GAMES