We’re a studio from Oslo, currently counting 12 full-time devs. A couple of us worked together in an advertising/communication agency called Hyper back in 2012 and worked on many game-related projects (like so-called “advergames” and “serious games”)  and we got their blessing to go indie and start a game studio. We released our first game, a kids game called Hocus Pocus Alfie Atkins, in 2013 and it was (and still is) really popular in the Nordics. We also made a success with platform game Eggggg – The platform puker that was a critically acclaimed mobile game, and earlier this year also released on Steam and Nintendo Switch. 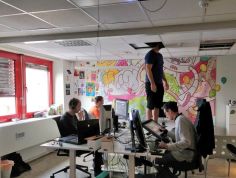 Just another day in Hyper Games

Morkredd is a game about light and shadow. It’s set in a pitch black world where two characters push an orb of light to bring it with them, and if any of them step into the shadows it’s certain death. This also includes stepping into each others shadow, so being mindful of each other’s position is tantamount. At its core, it’s a puzzle game about cooperation where showing consideration towards your teammate is at the center of the experience.

The concept emerged more or less fully formed from a game jam where the theme was “fear”. The main difference from the game jam version is that we cut the number of characters down from three to two, and added a “Brothers”-style single player mode where one gamepad can be used to control both characters. The concept proved so successful and interesting that we knew right away that we wanted it to be our next big project.

Our main sources of inspiration have been games like Inside and Below, mainly for their atmosphere and style, even though we all feel that Mads Frantzen, our Art Director, has done an amazing job coming up with a striking visual style that is unique and easy to recognize.

We must admit that there is an amount of trickery behind the scenes to get the shadows we wanted. We have experimented a lot with various ways to visualize lighting, as you will be able to see from the different stages of development we have shared. It’s a fine balance between visual style, readability, and game design. It is really important to make the game feel moody and atmospheric, but at the same time lighting need to behave in ways normal light doesn’t. Each of our characters has a separate invisible shadowcaster object, which is why they cast long and looming shadows. We also found that positioning the light source from the orb at its center wasn’t optimal for level design, so the light source is actually floating in the air above it. This way the orb can cast light to a higher elevation, giving us more room to work with.

Also very importantly it must have a very hard cutoff so you’re never in doubt whether you’re in a shadow or not, and when getting light from multiple light sources there should be little or no half-shadows. All of this, and the fact that Unity’s new rendering pipeline does not support point light shadows yet forced us to write our own custom shadow system from scratch.

Our programmers can talk at length about how we’ve essentially written our own light system that does lookups directly into the shadow map on the GPU etc but it’s a bit too detailed to get into now so we’ll save it for a GDC talk!

This shows the actual objects casting shadows in the game

Youtube video showing an example of how we tweak lights and shadow falloff:

As the game’s visual style is restrictive in the use of colors the character designs rely on unique silhouettes to help the player identify which one they are controlling. The glowing eyes help to keep track of which direction the characters are facing and are also a visual cue for their connection to the orb.

In terms of environment, we’re focusing a great deal on legibility; the surroundings should not be visually distracting for the player and the lighting safe zone borders in particular. Keeping a balance between clutter reduction and surface detail, for example, is a continuous exercise.

The environmental design borrows heavily from brutalist and fascist architecture. The large, simple shapes help us maintain visual readability in low light conditions and also fits nicely with the theme of the game, making the player feel small in an oppressive world.

The tilesets are composed of 45-degree components in a set resolution, attempting to strike a reasonable compromise between fast level iterations and varied components. More elaborate set pieces are done manually as needed.

Tileset components and environment assets are constructed primarily with Modo, often using the procedural toolset to help alleviate the chore of modeling all the possible corner and wall combinations. Texturing relies heavily on Substance Designer and some Photoshop.

Gif showing how we work with a tile-based editor:

The core of the game has been based on cooperation from the first prototype, so the challenge was rather how to fit the single player into the game. In Morkredd, each player can easily kill the other, and this adds another cooperative layer that we haven’t seen before. Each player must work towards solving their current challenge, as you do in all cooperative games, but in Mørkredd you have to show consideration towards your partner and make sure to not step in each other’s way. This dynamic is incredibly interesting to us, and it’s grounded in the game’s main mechanic, so players tend to grasp it immediately.

We try to ground all our puzzles in the light and shadow theme and we’re not interested in repeating content unless it adds something new to the experience. The core of the game is quite rich, especially as the Morkredd concept has never been done before, and we have a ton of ideas for new mechanics as well as thoughts on further exploration of mechanics we have already implemented.

After prototyping in Unity using the ProBuilder plugin, we realized that it was not the best fit for this game. In a sense it gave our level designers too much freedom, giving our artists a hard time when dressing the levels. We also felt that all the features available made it harder to use than was necessary, so we ended up creating our own 3D tile-based level editor within Unity. It’s not without its problems but it’s been a big boon to our productivity.

For most games, the main challenge is finding fun. This was never really an issue with Morkredd, already from our first prototype, we knew that this was a fun game for two or three players. For Morkredd our main challenge has been how do we create a game that’s fun for not only several players but also for one player, and we are finally getting close to having a very fun and engaging single-player mode.

Video showing a complete puzzle segment from the latest demo: