The price models that modern publishers use.

Tyler Wilde from PC Gamer published an opinion on prices of modern games. A journalist compares prices of different years and gives an overview of new pricing models that publishers can use now to boost their sales.

The author states widespread opinion that the games are more expensive now isn’t quite right: 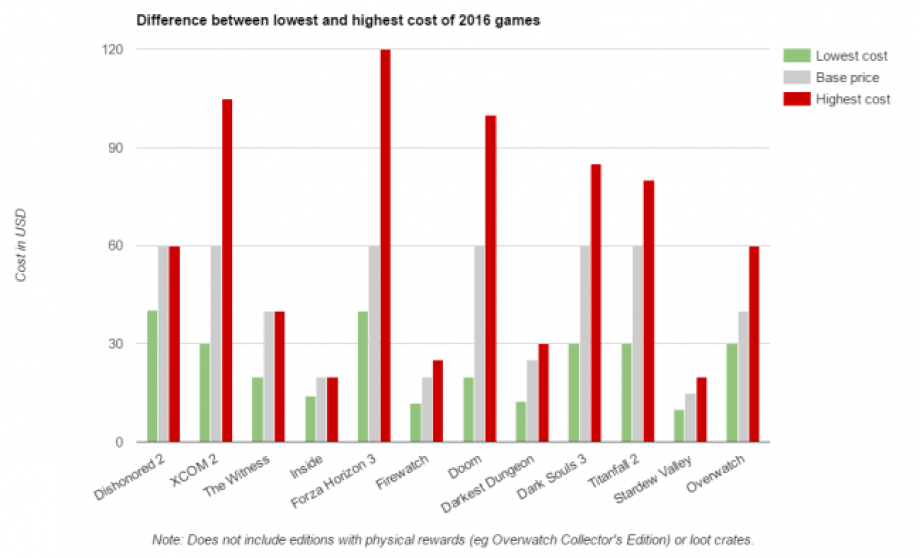 Games today, at their listed retail prices, cost about the same as they did in 1995. In an order-by-phone ad from the October 1995 issue of PC Gamer US, software distributor Chips & Bits Inc advertises games in the $25 to $50 range. Adjusted for inflation with the Bureau of Labor Statistics’ CPI Inflation Calculator, that’s $40 to $80, not including shipping and handling. No difference, really, although today there are more high quality, low price games to choose from and bigger discounts during sales.

But if you’ve ever said that the big-budget PC games are more expensive than they used to be, you’re right in the short term. There has been an increase in the price of big releases between 2008 and 2016, when they went from $50 to $60, slightly outpacing inflation—GTA 4 at $50 was a slightly better value than GTA 5 at $60. That increase alone doesn’t tell the real story of PC game prices over the past 10 years, though. A massive gap has emerged between the least and most it’s possible to spend on the same game, and the shift from $50 to $60 shrouds a more complicated scheme which moves more of the cost to early adopters.

There are lots of models publishers can use to get more cash from the players, like EA recently selling an $80 Battlefield 1 Early Enlister Deluxe Edition that let buyers start fighting three days earlier and the $130 Battlefield 1 Ultimate Edition with two weeks of early access to the expansions. In the meantime, some publishers might get more with lower prices. Just remember a sad story of Titanfall 2 – the game showed a poor start and the developer had to slash the price.

It may be true that 50% off sales aren’t devaluing games, and more than enough people are willing to pay $60 or $80 or more for the privilege of playing at launch. But saying again and again that it’s always best to wait, never to buy games at launch, and never to pre-purchase—which I do say—is good practical advice that’s not very fun.

Meanwhile, good games like Titanfall 2—which was better to us than its predecessor by promising free maps instead of a season pass—are bound to keep fizzling out on launch if the $60 standard isn’t reconsidered. Rather than publishers quickly slashing prices on games that aren’t selling well enough, and us telling everyone to wait for that to happen, there could be a middle ground.

You can read more on the situation with the modern prices here.