We’ve sat with Jeff Lydell and discussed some of the production peculiarities of Homeworld’s famous spinoff/prequel. It’s an incredible use of Unity.

We’ve sat with Jeff Lydell and discussed some of the production peculiarities of Homeworld’s famous spinoff/prequel. It’s an incredible use of Unity.

Homeworld: Deserts of Kharak had an unusual start. Blackbird was first founded to develop a unique IP named Hardware: Shipbreakers as an online web-based game. It was an ambitious title with several unique challenges, but it had two properties that lead to Deserts of Kharak. The first was it was based on planetary exploration in a desert world. The second was that the art leadership team here was also the original art team behind Homeworld.

Always present in the back of our team’s mind was the dream of acquiring the Homeworld IP and marrying the concepts of Hardware to Homeworld. In the end Gearbox ended up purchasing the Homeworld IP, and we developed Homeworld: Deserts of Kharak with them, so that dream did work out in a way. The 2D/3D blended animatics use a variety of techniques, typically done in video effects software such as 3DS Max and Adobe: After FX and Photoshop. Our artists use a combination of techniques including 3D projection mapping of textures, and hand-painting transitions.

The concept behind the animatics was to find a method of story telling that was connected to the original black and white animatics of the original Homeworld games and evolve that to a richer medium that could support full color. The effect we were aiming for was taking the concept art directly from the page and bringing it to life.

First was the initial inspiration for the level design, which came from Google Earth. We loved the camera movement and the degrees of freedom, and we used that to set the bar for the scale we wanted to impart.

Environment design was approached from the design team by building simple layout first, which allowed us to playtest and iterate on the level design. Later a concept artist would take that layout, and produce images of important map features, as well as full map overpaints.

To generate the detailed geometry, our environment artists would hand sculpt high poly meshes from a tool called Mudbox. We had to get good at modeling dunes and features by hand, as well as using pre-made assets. 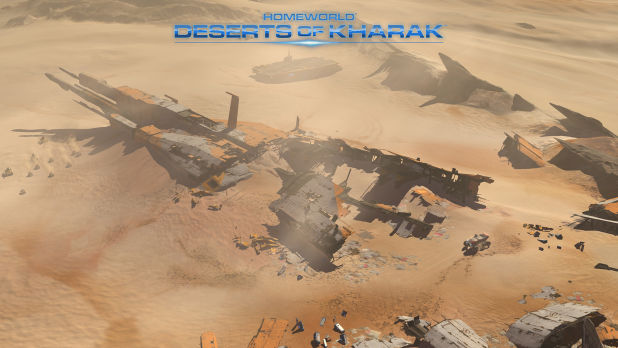 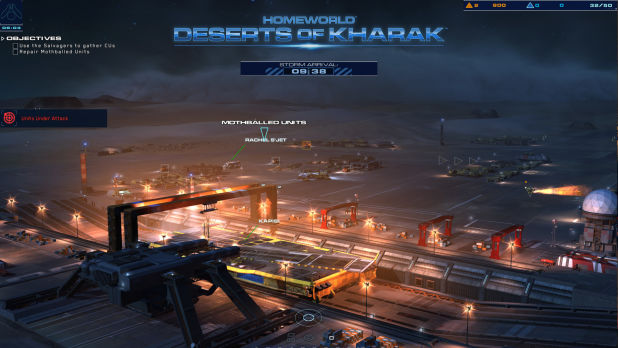 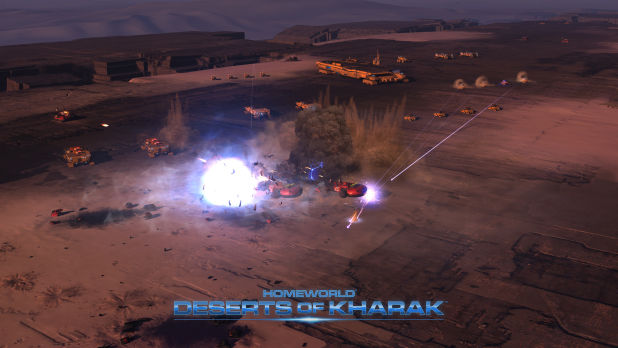 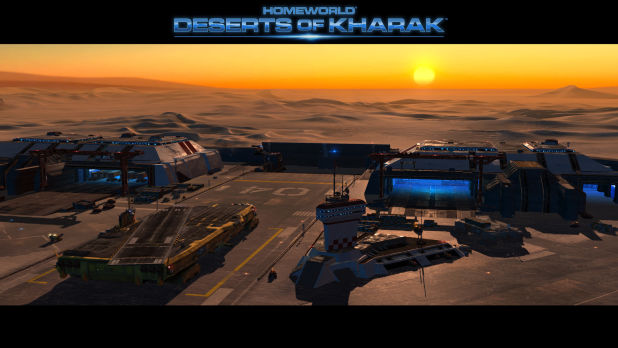 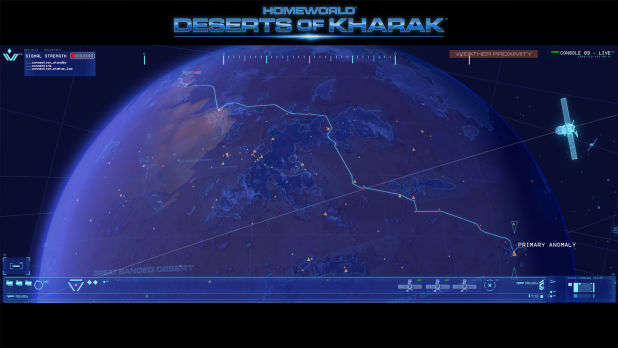 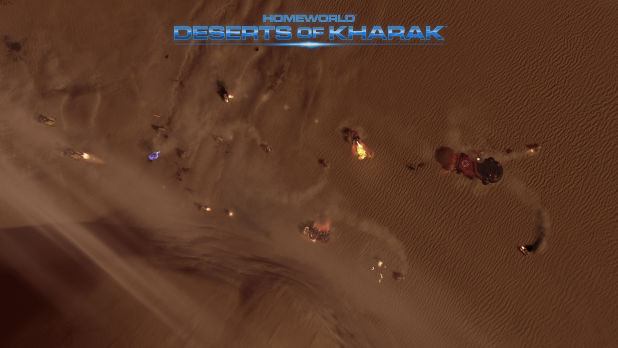 After the sculpting phase we would export out incredibly high poly versions of the levels, and segment them with a custom tool called the Chunker, which allowed them to fit in the performance limitations of the game engine.

After that step our artists would take time to dress the map with 3D world objects and decals, which brought out the details.

Lastly we would light the levels. Getting the lighting right was a crucial step in hitting the visual quality and variety of the desert, and it was an area we struggled with for a while. This process started with in concept art in the form of mood boards, which we used to inform the end target. As for the process itself, this blog post has a good amount of information on how our team went about the work.

Maps were a very labor intensive process, but I think we are all happy with the final results.

The first step was looking at visual reference to find the variety of targets. We looked at images of every desert we could find here on planet Earth, and studied the features in detail. This included the placement of dunes, and the logic of how the other rocky features would interact with the dunes.

With vehicle movement there was a lot going on, but the spins and drifts of the fastest units were fundamental to selling the fantasy. FX and lighting were important to selling every movement and impact, the splash the carrier makes when it crests a dune helps it feel real.

The vehicle fantasy was a fundamental pillar of Homeworld: Deserts of Kharak. We built our pathfinding system to sell the movement patterns of the different vehicles, and rigged custom suspensions and behaviors for each type. When an escort jumps off a dune, the pathfinding gives it the direction to head, and the physics sell the landing and suspension movement.

The main difficulty with a system like this is the insane amount of tuning required with every component. Each wheel and interaction with its suspension needs weights and movement parameters set to it, and every time we changed a variable like speed or turning rates, it could throw the entire vehicle off. There were variables for every interaction, including wheel ground impacts, suspension compression, and many support FX to help make it look right. 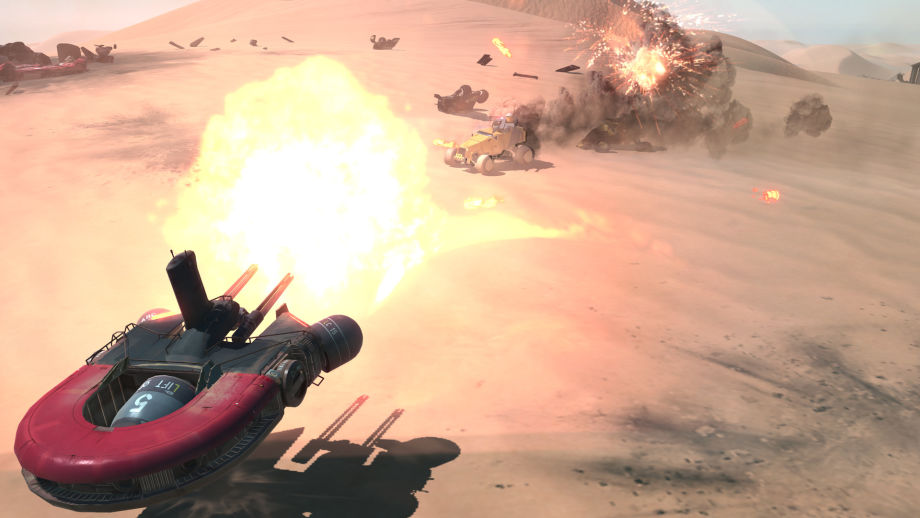 Voice has two important jobs in a real-time strategy game, one is the selling the immersion of the world, and helping inform the player where they need to spend their attention. We had both reactive systems which responded to player inputs, and ambient chatter systems which reacted to the events around the units.

We were also lucky enough to hire talented professional voice actors to deliver the performances. We did some table read rehearsals with the entire cast, which helped the cast really gel together.

As for the music, full credit goes to our composer Paul Ruskay. He generated a mountain of content, and pulled in a combination of eastern string performers from India, and orchestral strings in Prague. Music for Homeworld: Deserts of Kharak was a truly global production.

Jeff Lydell, The team of Homeworld: Deserts of Kharak