Gui Junqueira provided a detailed breakdown of his amazing ‘The Orchidarium Grove’ scene, which features an incredible amount of overgrown organic elements.

Gui Junqueira provided a detailed breakdown of his amazing ‘The Orchidarium Grove’ scene, which features an incredible amount of overgrown organic elements. 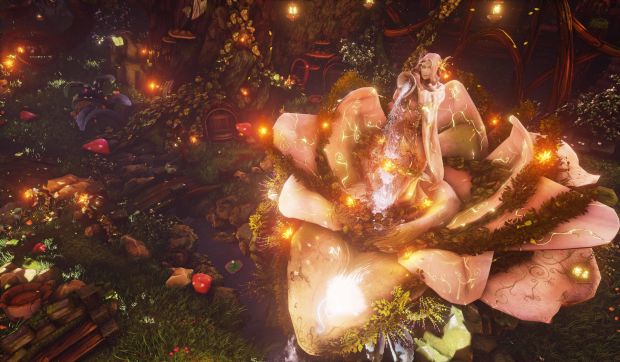 Hello everyone! I’m Gui Junqueira and I’m about to tell everything about the process behind my demo-reel “The Orchidarium Grove”. But first I’ll give a brief introduction of myself.

My full name is Guilherme Junqueira de Mattos. I’m Brazilian born in 1987 in a small town called Anchieta and raised in Vila Velha city in the Espirito Santo State. I’ve been a dreamer, lover of art and games, traits that naturally dragged me to the game production field, after a long and bumpy road.

Brazil is not a good start point for the CG field and I had to dig my path abroad starting studying traditional arts at the School of Visual Arts in NYC for about one year and then heading to the Think Tank Training Centre in Canada where I was trained in the CG arts and finished my first demo-reel as a graduation piece.

The Orchidarium Grove first concepts started around September 2016 and at this point it didn’t had a story or even a name. I strongly believed that my background in traditional arts alone would be enough to quickly develop a straight forward scene that would be easily replicated on a 3D world with no big issues. But Concept Art is a really long and intense process that involves an enormous amount of study and paintings in order to convey cohesive shapes, colors and story.

I started the idea with a simple Photoshop painting using no references, only my residual memory from the universes I enjoy the most, Blizzard Entertainment’s, Zelda and Lord of the Rings. And that was, obviously, not enough to reach the final concept, however that allowed me to start the blocking stage on Maya. 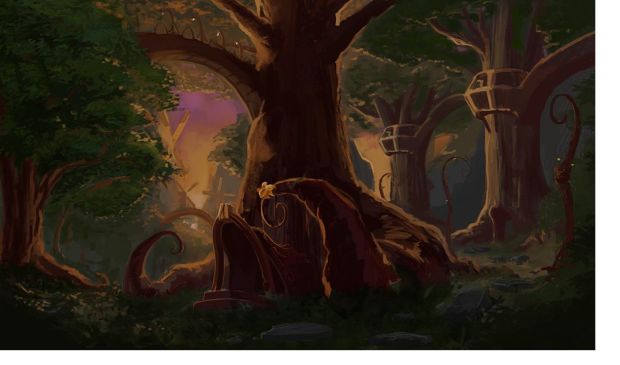 Since I had a deadline, I couldn’t take a deeper step on the concept stage at the start and had to concept most aspects along the way. Honestly, I was not expecting it to get so deep at the end.

My goal with this environment was to create my own stylized hand-painted scene, therefore I built this world as if it was a giant canvas, where the position of every single leaf card would matter. I wanted to look around and be surrounded by this overgrown magical and serene nature scene while sharing a bit of peace and calm with everyone who would see it.

The blocking stage started on Maya. I used a human-sized character as reference to figure out world dimensions in order to spread really rough shapes such as cubes and cilinders that would end up being replaced by the final assets. Although nothing was set in stone, I would constantly test the blocking stage inside Unreal. Once I achieved the feeling close from what I had in mind, I would take a screenshot from a specific angle and take it to Photoshop so I could paint over. By doing that I could carry the concept stage along the way without having to finish it beforehand. Which is honestly not the best way of doing it but, since I had a deadline, I had to use all the tricks available to save time.

The first step was to block the scene I had painted, modeling the rough shapes in order to start giving life and a meaning to the environment. It started as a large scene with a very simple park in the center surrounded by five huge main trees that would end up being the inhabitants house.

Although it looked cool it lacked in feeling and story which demanded me to stop the current process and write down a quick lore for this place.

“This Reel is about a small elven village stablished on a cozy and magical grove known as The Orchidarium, a mystical place known because of its miraculous Grace Orchids. Its inhabitants have been protecting it For generations with care, and cultivating those gentle-glowing flowers for trading and personal use.

Those Orchids have natural healing properties and can be used to mend any kind of wounds or illness on all living creatures. Powers so strong that there are rumors on the inhabitants of those lands being the same for thousands and thousands years, some even say that it’s a single person taking care of it since the beginning. Nobody knows exactly since even the location of those lands is unknown.

Because of it’s immense power, this area is overgrown and abundant in life. A simple lawn grass can grow tall as a human and the tiniest mushrooms get thick as a trunk. 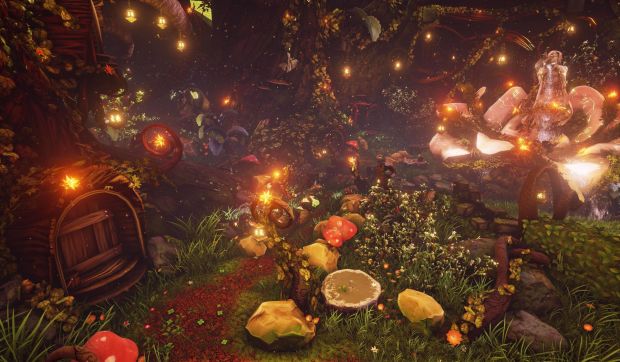 All commerce is made by summoning spells in order to protect the groves location and nature. The flowers and seeds are crushed by the windmill to a sweet-scented dust, and taken to the temple inside the tree where the incantations and summoning process happen.

There is a fountain at the center of this grove that does not have any magical enchants but once the water gets in contact with the flower dust, nectar and/or pollen it ends up spreading the healing powers over those lands through thin streams and small rivers.“

By doing so, I could move on and set my imagination free to work on other aspects such as textures and lights.

The overgrown nature and all the organic forms were a huge challenge. To have everything matching as part of the same environment and not looking overly repetitive took a long time, researches, tries and errors. For instance, I wanted the main trees to have a different look, not only a tileable vertex-painted texture across all over their 180 meters ( 590 feet ) body. I had to come up with a modular solution for it.

I knew I couldn’t rely on Maya paint effects, Speedtree or any vegetation generator, I would have to tackle that by hand.

One day I was heading to school and I saw this beautiful tree with dry barks peeling out of its trunk and I had the insight that allowed me to create my trees in a different way. I took a little piece of this bark with me and was studying how could I use that idea properly. 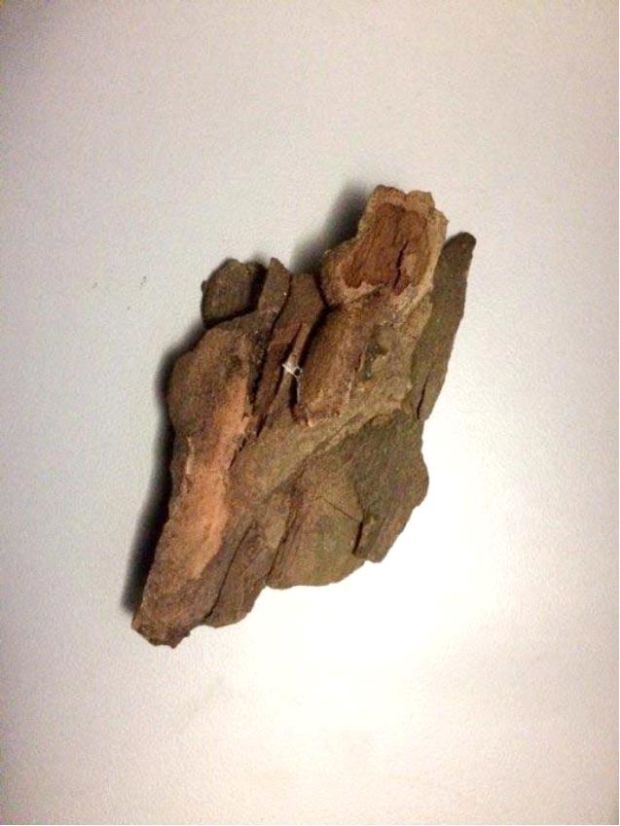 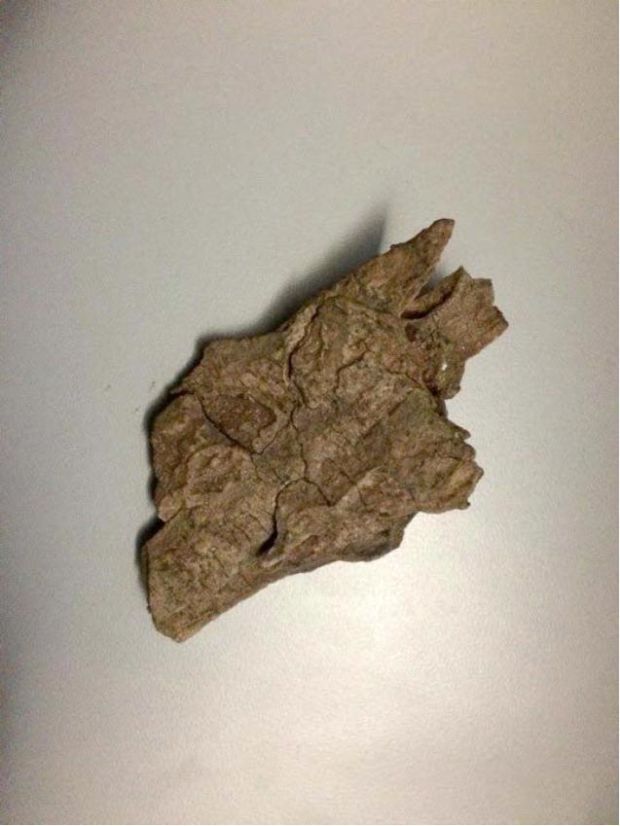 Instead of making the tree body as geometry I decided to use the barks as dragon scales, modeling four planes that would resemble the bark form, and hand-painting eight different textures within their UVs in photoshop. By doing that I could build all trees placing bark by bark on top of each other which took me a long time but the result paid of. 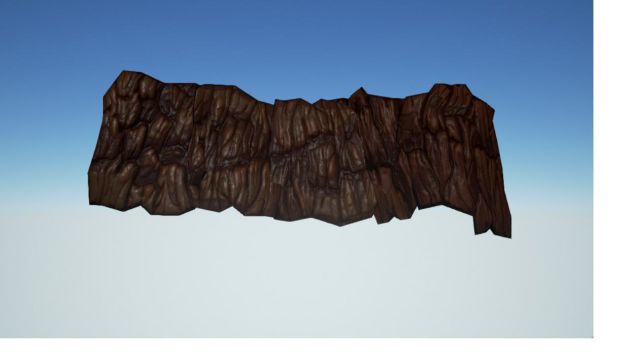 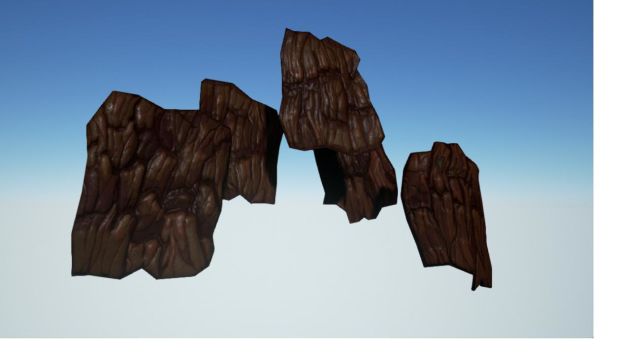 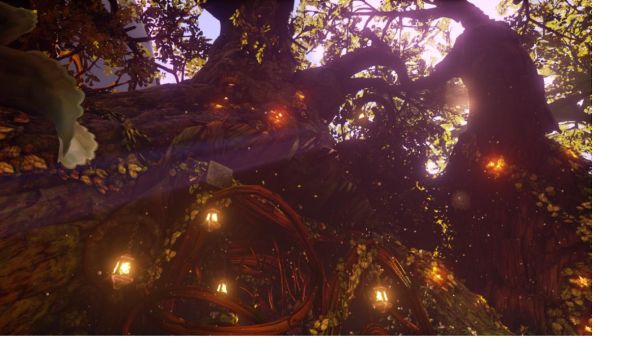 Much like my bark, branches and leaves, the ivy cards were also individually placed by hand. Since I needed them to be all over the scene, I had to take care of where they were located because their cards are barely subdivided in order not to make the scene overly heavy. 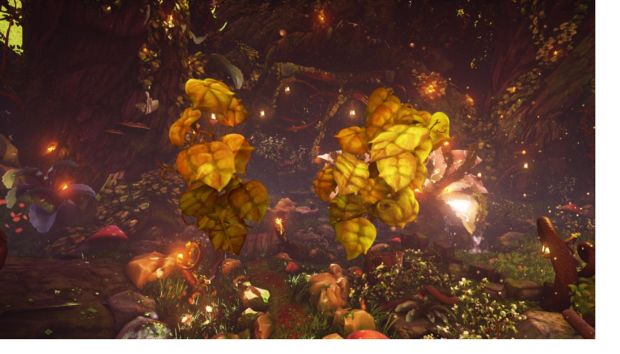 My environment is composed by a few simple assets however what brings it to life is how everything was placed. I believe that complexity is not really required in order to make something to look cool, sometimes it can even make it poluted and hard to read. Just by arranging assets and making use of impressionist techniques it’s possible to reach some very interesting and appeasing results. Basically, I chose a swirl pattern form to be used across most elements like the roots, branches, runes, cracks, wood textures and then “framed” them with other elements such as trees, bushes and grass. By doing so I kept the elements harmonically connected. 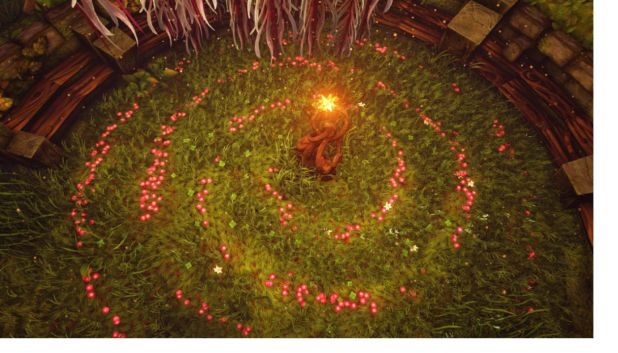 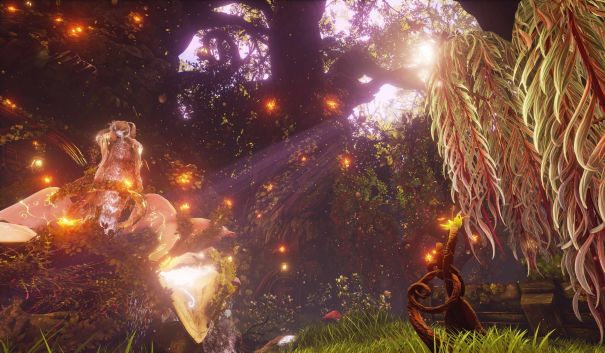 The water in the fountain was really interesting to make. Since I didn’t want anything realistic it took me some days of different attempts and adjustments until I got the final version, using gpu particles for the drops and simple sprites for the falling water. Both with normals taken from Photoshop with simple adjustments just to have a bit of refraction going as the water falls down. 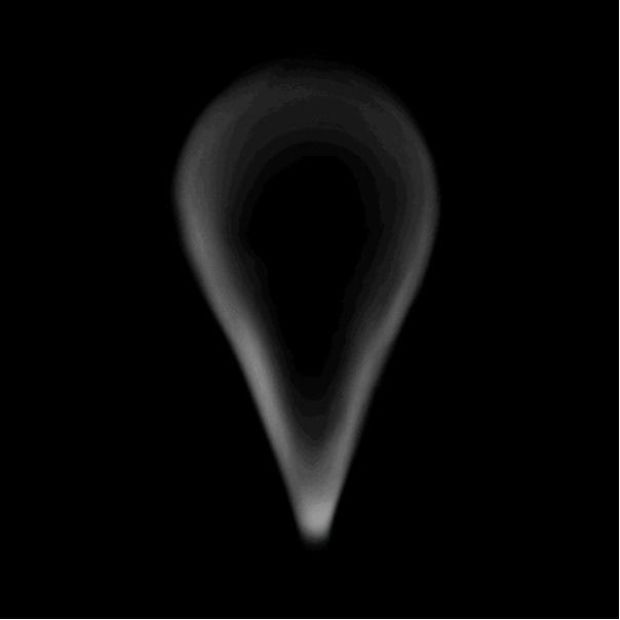 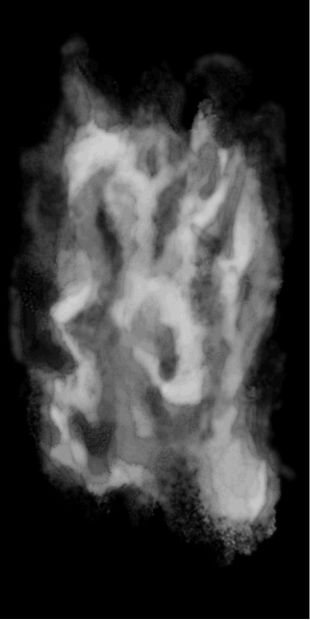 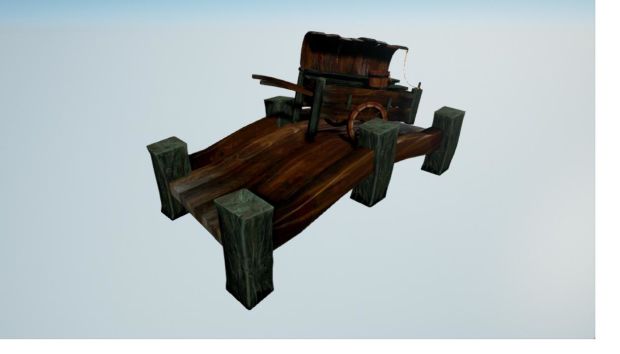 The statue is a center piece and since the beginning I knew it would be in there but I was never sure of its final form until the last two months of work. 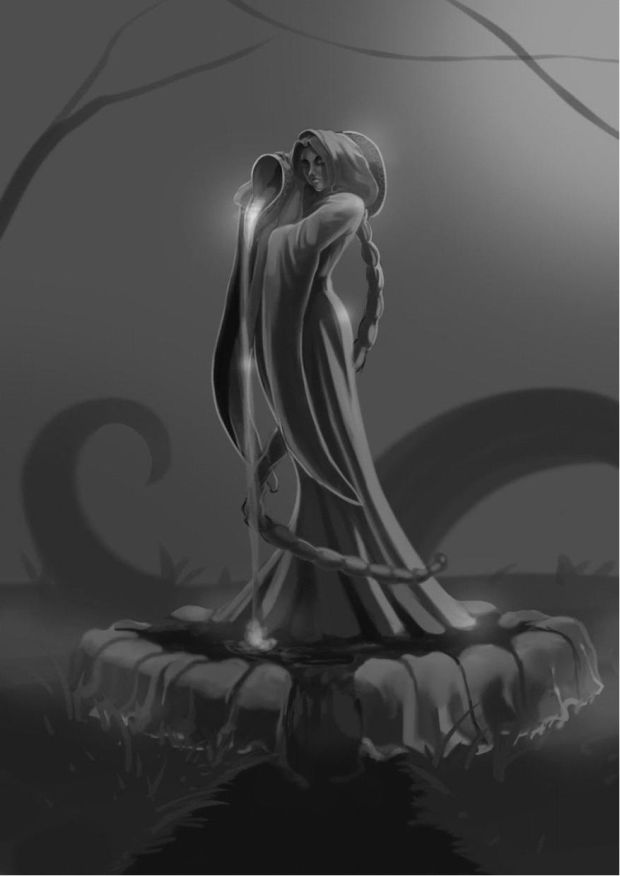 Even though I really enjoy the simplistic feeling that I had on this concept I made, I felt like giving it more “power” turning the bowl into a blooming flower with glowing cracks and runes. 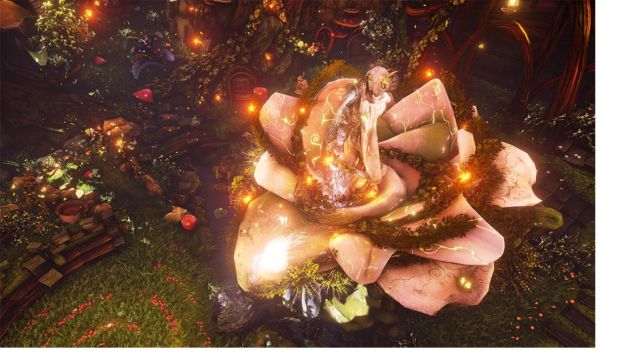 My goal with the foliage was to make it look harmonic. I was not looking for any specific type of vegetation and I basically kept in mind what kinds of foliage I would find in overgrown areas. I started painting the foliage in Photoshop first, then I built the geo based on my hand-painted texture sheet. 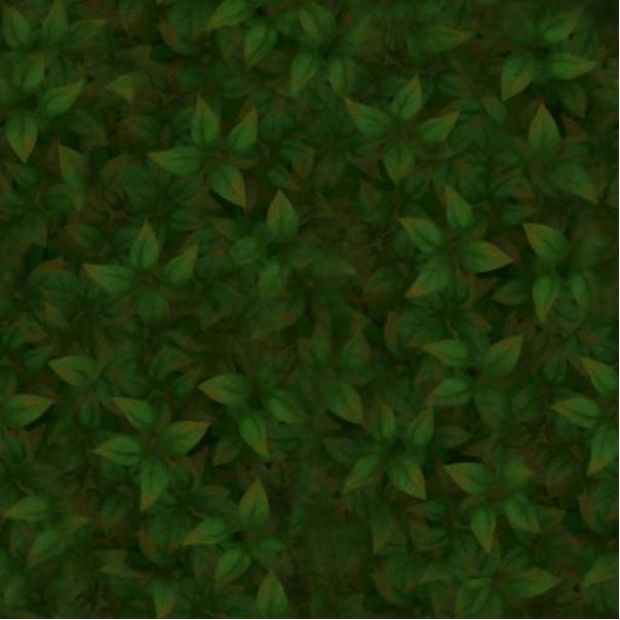 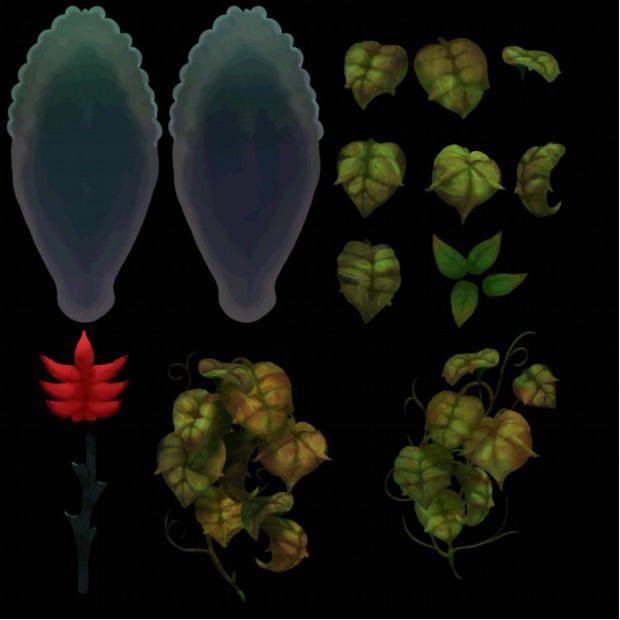 I’m really happy to share my experiences and am also extremely glad that 80 Level gave me the opportunity to do so! I hope you enjoyed my work and that it serves as inspiration and reference for you! Please feel free to contact me with any questions and suggestions!