My name is João Schuler and I'm 20 years old, currently living in Brazil, Porto Alegre - RS. In terms of animation, I ended up contributing only to my personal projects, because I worked professionally only in the ArchViz market, making lighting, materials, render, post, animation of assets, and VFX.

I started getting interested in animation right after testing various areas of 3D. As my first opportunity was to work as a finalizer of architectural images, I wanted to test all the possibilities to see if there was anything else I liked. At first, I was a bit in doubt of what I liked, but about a year and a half later a colleague of mine (Roberto Gaspar) showed me character animation.

Unlike many, it was not love at first sight – in reality, it was insecurity at first sight. I liked it a lot but at the same time, I knew that all my photography/lighting skills would not go well with this new area. After a lot of thinking, I decided to get into it, spent about two months studying with that colleague of mine, and right after I sought a mentorship to improve myself. I think what attracted me to animation was being able to bring things to life. I liked to make still images, but when I animated a simple cube I thought it was great, and when I saw that I could animate characters, my personal satisfaction only grew even more.

Being very sincere, I ended up skipping the stage of rigging at the beginning, as I really liked to animate and decided to study based on ready-made rigs without worrying about this part of the workflow. Only today, after 1 year of studying animation, I started to learn the basics of rigging, but my advice for those who want to get started in animation is to take advantage of the range of free rigs on the internet and play!

The idea behind this shot was to study a scene with two characters interacting, as I had never done anything like that. I thought that making a loop (which could be seen several times without getting tired) with a fight (which I think is great in particular) would be a good option to train this.

I started the project with one of the things that I consider the most important in all the work, which is searching for references. I separated several gifs of looping fights in a folder on Pinterest and finally, I chose the one of Dragon Ball Z. In animation, I really like the weight, the feeling of impact, and I think that anime does that very well.

I think the first thing is to look for a nice reference, it will guide your work. In this study, I ended up needing to draw some extra frames to close the loop.

After that, we can start thinking about the rigs we are going to use. Following the reference line, I mark the poses that I intend to do in 3D and start blocking. This step can be very time consuming, as we try to extract the maximum from the poses, even if some of them are slightly altered. Having all these poses, I follow for blocking plus, which is to leave more or less 1 pose every 3 or 4 frames. If we do this step well, we will save a lot of time in the next one.

Then we pass all the keyframes to spline and start to refine the arcs and adjust everything that got lost in this transition from stepped to spline. Generally, the more time we spend on blocking plus the less time we need to keep adjusting the splines. And after that, I just make fine adjustments until I reach the results I like.

This exaggerated cartoon style is my favorite. I think the best trick to achieve this effect is the reference. I personally often look for it in anime and games – for example, the references I studied a lot for this project were some punches and kicks from Ryu (Street Fighter), and what stands out the most in those are the contrasting poses and the timing/spacing of the strokes.

The first thing was the key poses: I looked for a lot of punches on Pinterest and also focused on the one I already had from Dragon Ball Z. 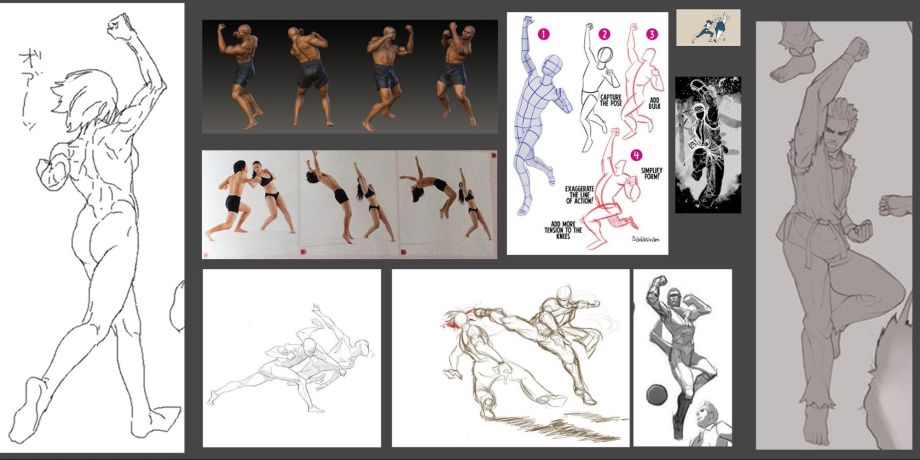 What helped the crocodile to become so flexible was some stitches, the tail, and some smears. If you examine the part where he falls to the ground after the punch frame by frame, you will see that he completely stretches his leg and it totally deforms the character. It doesn’t show in the frame, but it feels very flexible.

I think there are not many rules in animation – we have the 12 principles and from there, we can take our animation to the direction that most interests us. But if I could name a “rule”, it would be "always look for reference" because without it,  we are blind.

A YouTube channel that inspires me a lot is Pegbarians, I believe that any animator who likes anime should watch it – he breaks up the movements of famous episodes and explains why something works or not.