The team behind physics-based animation package Cascadeur shared their study of the Falling Cat Problem and its recreation in the software. The original article in Russian can be found here.

As we all know, no matter how a cat falls it always lands on its feet. Scientists have always been so fascinated by this effect that they came up with several models of how cats are able to do this. All those models were rather crude and mostly used primitive geometric shapes e.g. cylinders. However, our team, who developed a physics-based animation software Cascadeur, attempted to recreate a cat performing this trick on a different level using a more complex physical model.

Picture from a scientific article by Richard Montgomery, 1993.

Physicists used to assume cats could calculate their rotation at the start of the fall and thus managed to correctly push themselves off, acquiring the angular momentum necessary to land safely. However, experiments have shown that even if you hang a cat by its legs and then cut the ropes, the cat will still manage to turn itself over.

That seems to be a specific reflex that cats possess. When they lose grip, they can estimate their orientation in space and execute the right move. However, this reflex doesn’t really work without gravity. But even with no gravity cats are still able to change their spatial orientation by moving their body.

We tried to replicate this cat trick in Cascadeur. The cat’s physical model included with the software allows simulating its movements with a sufficient level of detail. 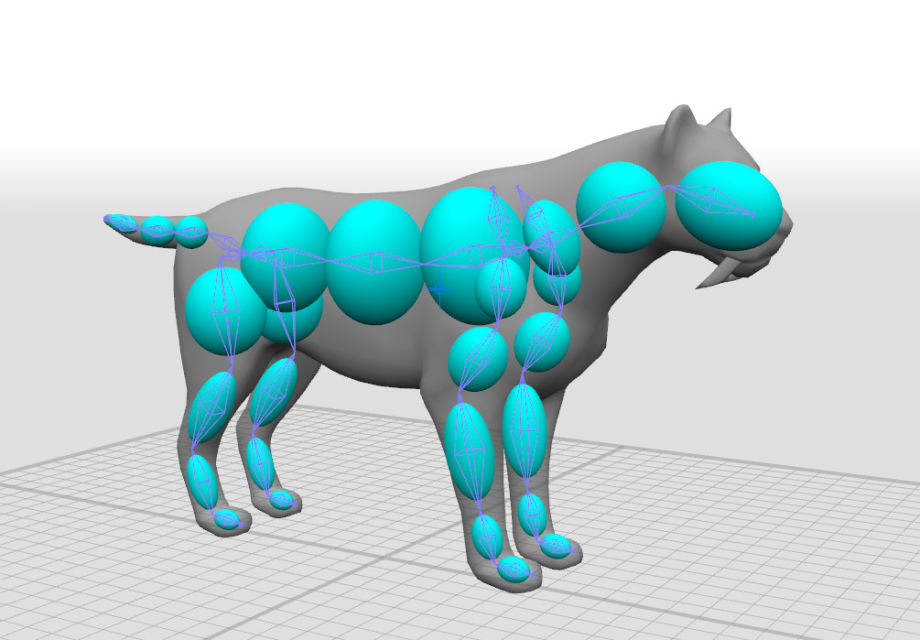 The Falling Cat Problem's main issue is that having no fulcrum points a cat cannot change its angular momentum. If the angular momentum equals zero at the start, it remains zero.

We used to think that cats turned themselves round by swinging their tail in one direction leading the rest of their body to swing in the opposite direction, keeping the angular momentum at zero. Sounds reasonable, however, the tail itself doesn’t seem to be enough. As the footage of real-life experiments shows, cats move in a much more complex way. More so, even without a tail, a cat will be able to turn itself around just fine.

As it turns out, physicists proposed various solutions to this question at various times.

In 1894, for example, L. Lecornu put forward a model that described a cat as two cylinders rotating at an angle to each other. This idea made no impact on the scientific community, but later in 1935, it was further developed by the Dutch researchers Rademaker and Braak.

The experiments showed that cats bend their bodies in the center. The front and the rear halves of a cat's body can, therefore, be represented as two cylinders that can rotate along their axes. If there is an angle between these axes, the rotation of the cylinders creates a general compensatory rotation in the opposite direction to keep the total angular momentum at zero.

We tried to recreate all of that in Cascadeur with our saber-toothed cat.

But no matter how hard we tried to bend the cat’s body, we weren’t able to achieve a 180° turn. The closest we got was a 120° turn performed in a single move, which led us to conclude that this movement itself would not suffice.

Having carefully examined video references we discovered that cats do not simply straighten one front and one back leg, but also swing them in opposite directions.

Because we used a physical model more complex than just two cylinders, we were able to recreate the swinging movements of cats’ legs.

Having experimented with those swinging movements we came to realize that they have a surprisingly significant impact on the rotation. That together with body bending, is enough to rotate a cat 180° and beyond.

Our experiment doesn’t really make use of the tail as our saber-toothed cat has a short one. In real life, however, cats don’t swing their legs as much, they bend their bodies to lesser degrees and use their tails to amplify the rotation.

All that has led us to conclude that cats do in fact use several methods at once. Bending the body has the greatest impact, swinging the legs is the second most important movement, and the tail complements the overall effect.

Even though our experiment might not be a scientific study, we hope it was entertaining and helped you better understand how cats are able to perform this trick.

If you have any questions, feel free to ask in the comments.