The amazing Blizzard artist Phillip Zhang shared some techniques, which will help you to build better and more interesting skyboxes.

The amazing Blizzard artist Phillip Zhang shared some techniques, which will help you to build better and more interesting skyboxes. 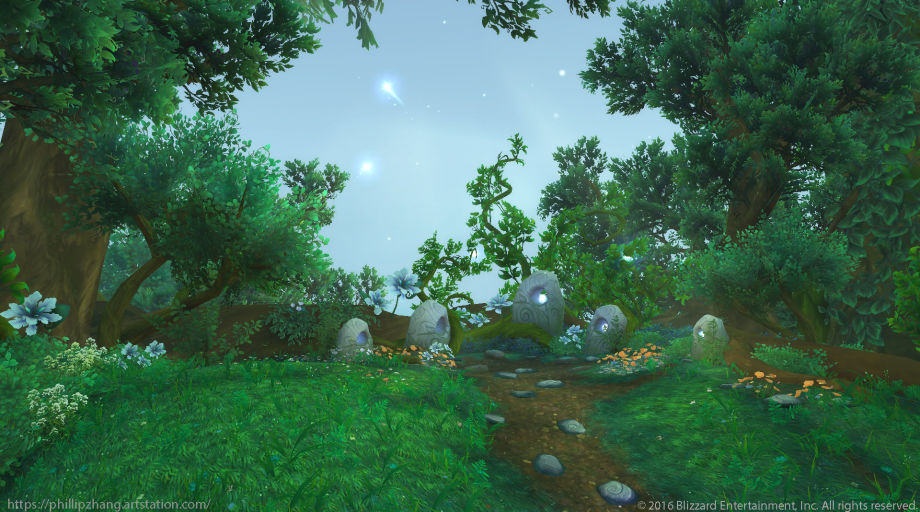 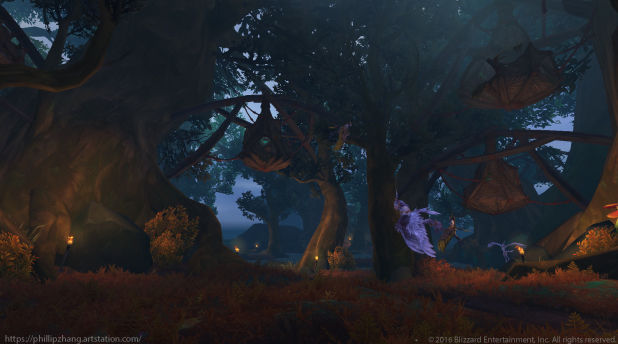 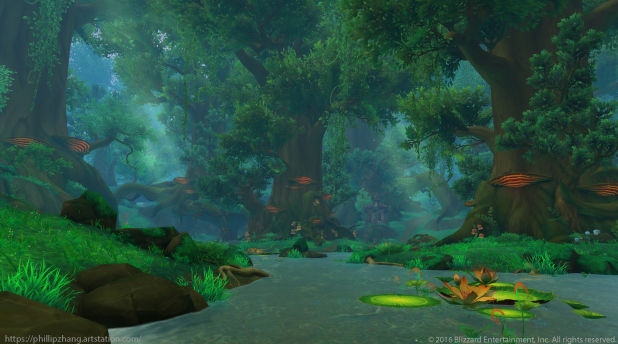 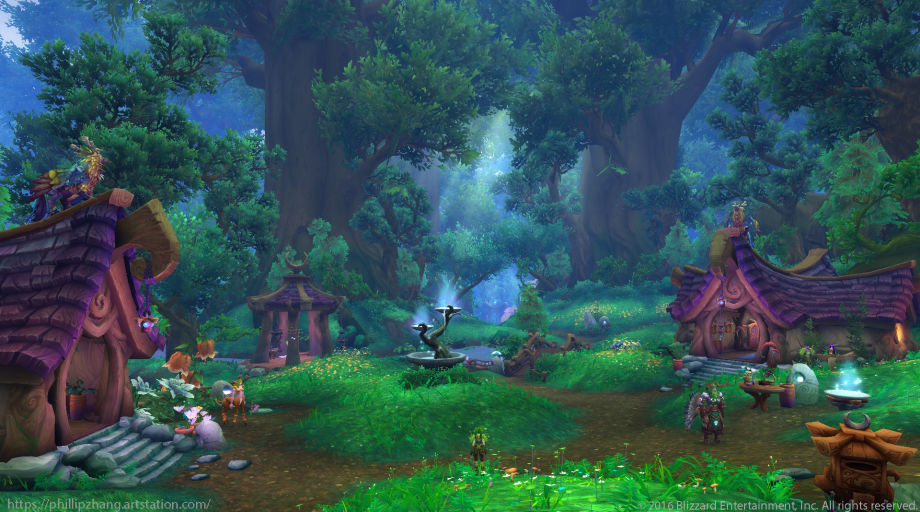 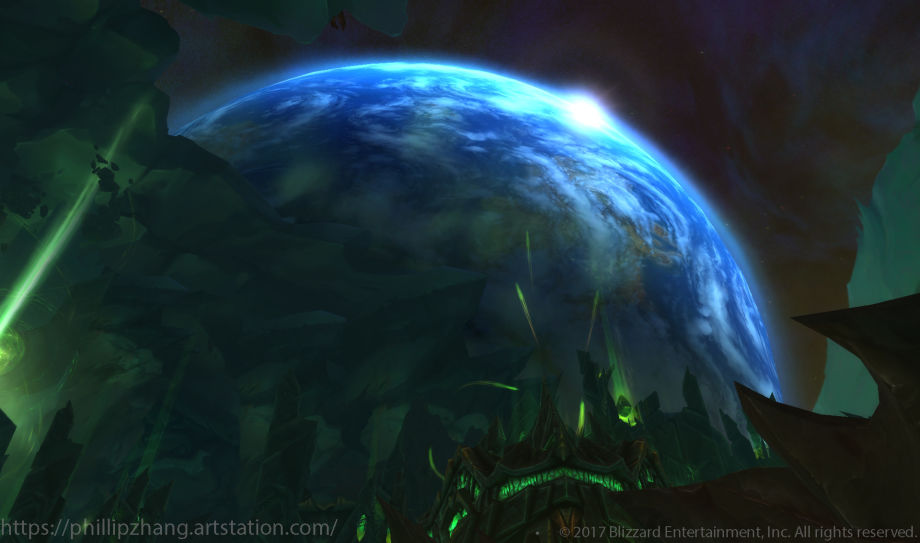 My name is Zeyan Zhang, also known as Phillip Zhang. I am an Environment Artist currently working on World of Warcraft at Blizzard Entertainment. I was born and raised in China, and I was always fascinated with art and stories as a child, which lead me to study Digital Media at the Central Academy of Fine Arts in Beijing. After I graduated, I moved to the United States to continue my studies in Game Art at Laguna College of Art and Design.

When I finished my education, I had my first industry experience at Disney ABC Television Group as a concept artist intern in 2014. A few months later, I entered in the Blizzard Student Art Contest and was chosen by the World of Warcraft team to work as an intern. Since then, I’ve worked on World of Warcraft: Warlords of Draenor and World of Warcraft: Legion.

During my time on the World of Warcraft development team, I have worked on both the prop team and the environment team. Before explaining my process of approaching skybox tasks, I would like to share a few things I have learned while working on these teams.

On the World of Warcraft development team, an artist is expected to concept, model, and texture assets from start to finish. As an intern on the prop team, I handled a variety of tasks: cultural kits for different races, faction-themed assets for battlegrounds, and class-based armor. One of the most important things I’ve grasped in this experience is that every asset has a tale; each asset is a unique character with its own personality and background. For example, an Orcish gate would be made of roughly chopped lumber, scarred and covered with blood-stained leather ties, animal bones, and metal spikes. A Night Elf gate would have lush overgrown vines and tree saplings, decorated with wild forest flowers and fruits, since their culture values the preservation of nature over everything else. In my opinion, it’s much easier for an artist to come up with interesting designs if the story they wish to tell is clear. 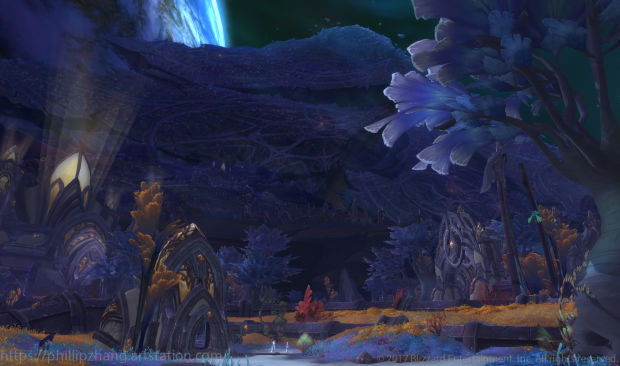 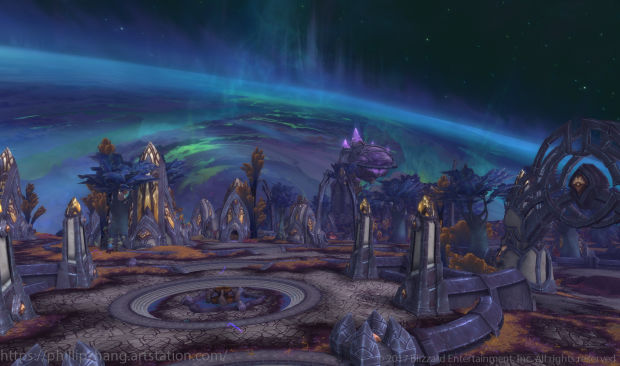 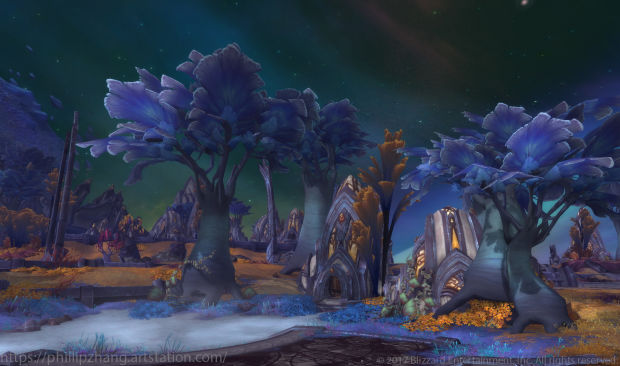 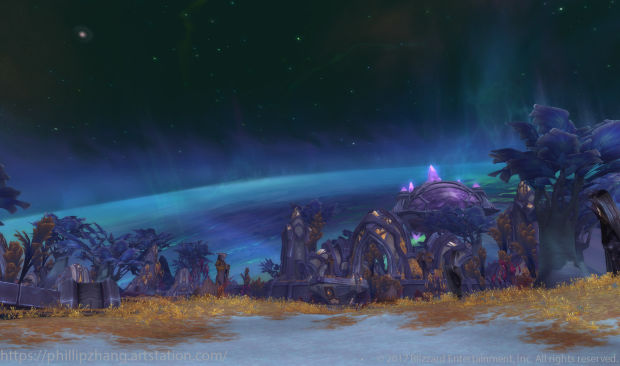 My method of storytelling through my art made me a good fit for the environment team. After my internship ended, I officially started my Blizzard career as an environment artist. Environment artists create trees, plants, skyboxes and ground texture tile sets for zones. The most important lesson I’ve learned is that the big picture of a scene always comes first. A nicely crafted tree may look rad by itself, but it could ruin the whole composition by demanding too much attention. An environment artist should be constantly thinking about the color and shape relationship among all of the assets to positively impact the overall look of the scene.

When I begin a skybox task, I try to visualize the skybox not only as an individual piece that tells a story to the players, but also as a background image that blends with the rest of the scene.

Last August, I became the first environment artist to start on Shadows of Argus (Patch 7.3). To illustrate the landmass of destroyed Eredar home world, a few designers and I decided to try to bring in matte paintings to World of Warcraft skyboxes. I began with the excitement of sharing a story with players—that Argus was once the home world of proud Eredar people, and thousands of years ago, it was conquered and crushed by the demonic Burning Legion. In the block out phase, I let my imagination run wild with shattered terrain, demonic strongholds, erupting volcanos, and ruined Eredar cityscapes. Later on, after other artists and designers had fleshed out most of the playable space, I pulled out some of the elements that were drawing too much attention and took screenshots of the playable terrain shapes and buildings in order to incorporate them into my matte paintings so that the overall scenes look cohesive.

A skybox in World of Warcraft is an illustration that stretches beyond the playable space. It influences a player’s emotions with light, shadows, and color. On the environment team, we design skyboxes based on the mood, story, and climate of each location. We also set up dynamic weather systems, such as rain and snow, to add variety to the play experience. Here’s more detail about the basic structure of a skybox: 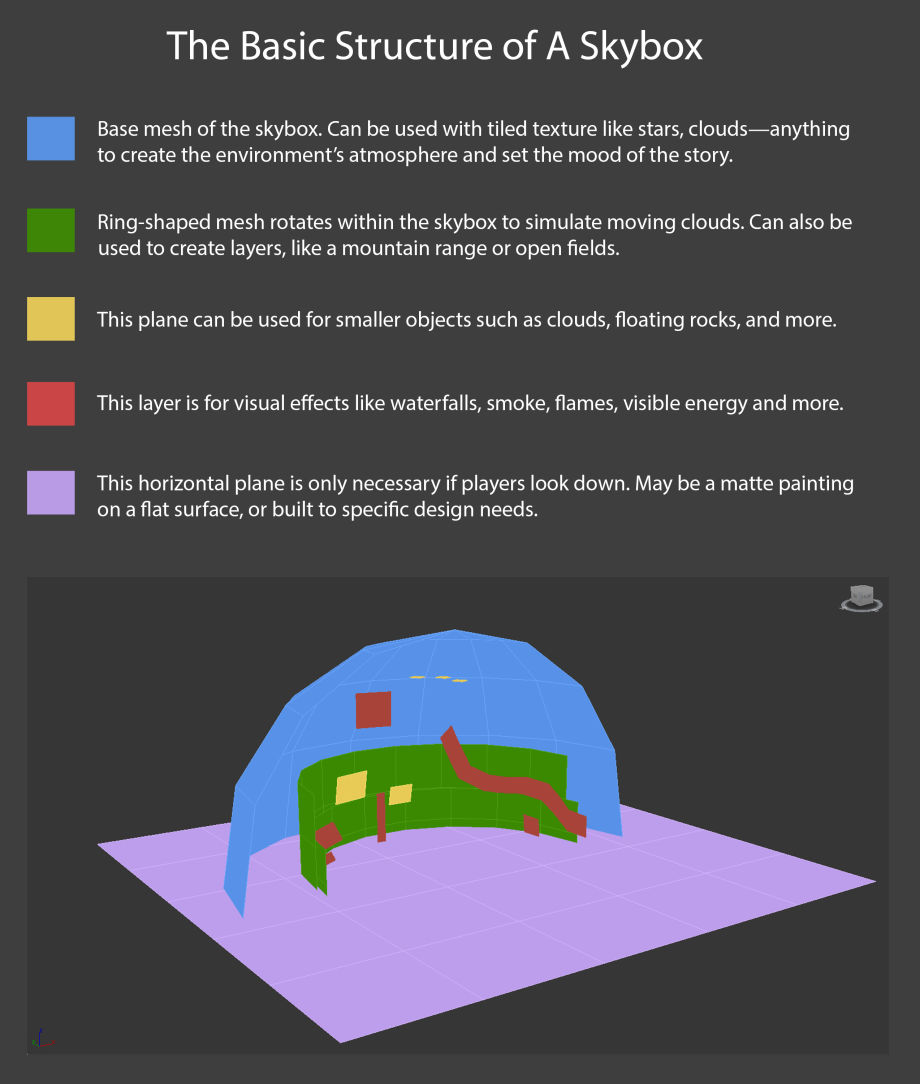 The process in making skyboxes with a matte painting isn’t too different from a regular skybox. Here is a quick example: 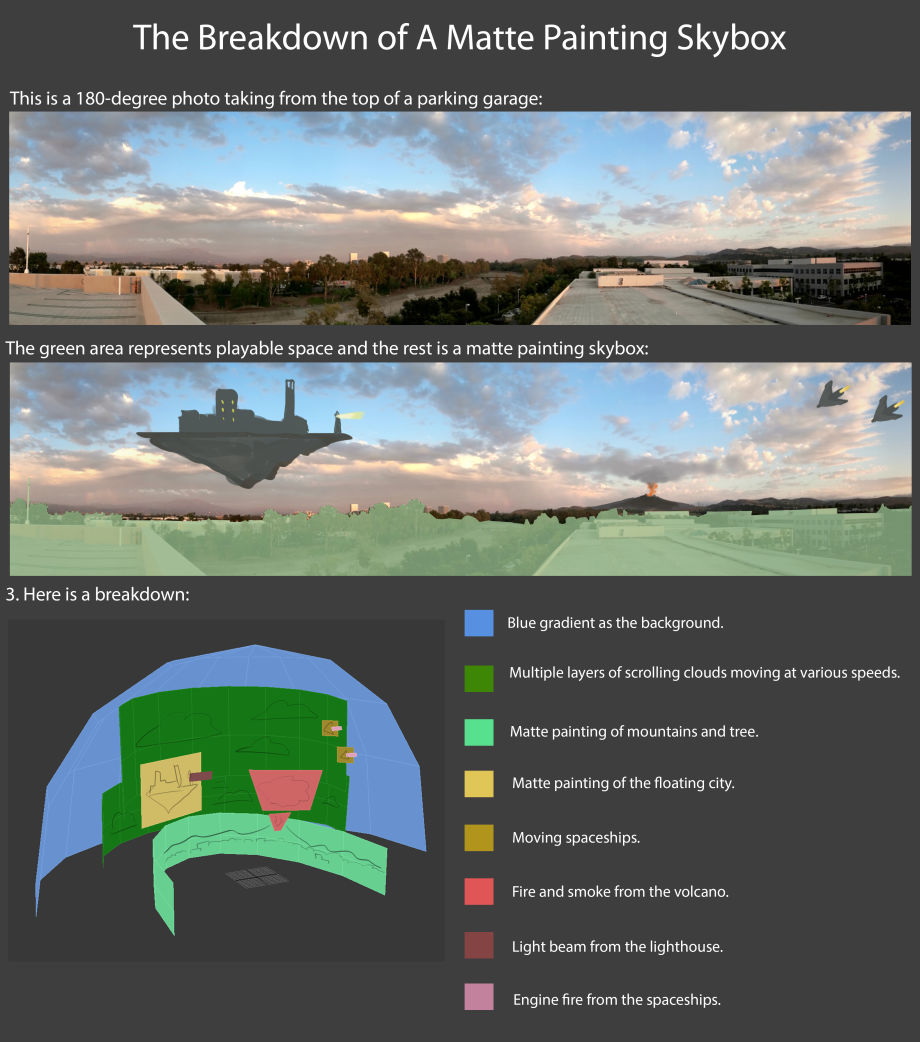 When you’re deciding what elements to add into a scene, a good place to start is to consider what foreground elements we can borrow. For instance, a mountain with tall pine trees could stretch for hundreds of miles in the matte painting of your skybox; doing this will create depth and a large sense of atmosphere within your environment. 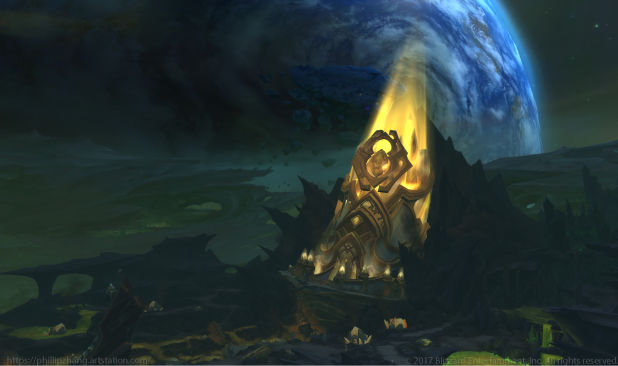 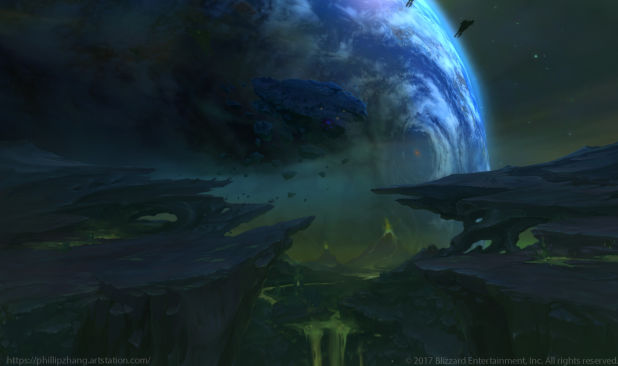 A skybox is the backdrop of a scene. Players wouldn’t feel immersed in the environment if the playable space and the skybox appeared disconnected. The use of color and shapes in a skybox should always echo the elements in the foreground. You also have to consider how the human eye works when you’re viewing an environment in the distance. Things that are further away from a person usually have less contrast compared to looking at something right in front of you. The same applies to assets for the skybox.

Creating skyboxes with a matte painting could be an effective way to solve design problems. Sometimes, an ambitious concept—such as an ancient city in a jungle or a burning spaceship in the sky—would take artists and designers thousands of production hours to construct in a 3D space; however, it can be achieved by creating a matte painting on a single 2048×2048 pixel canvas with a couple weeks of work. I believe the key to creating a successful, story-driven environment is to communicate with your team, learn what the vision is, and then try to visualize it with matte paintings.

Old masters from centuries ago have developed many effective methods to create stunning environments. In the past two decades, there have been hundreds of amazing digital artists who keep inspiring us with their amazing work. Websites like Blogger, ArtStation, and Pinterest are places I visit frequently to collect reference and inspiration. A few of my personal favorite artists are: 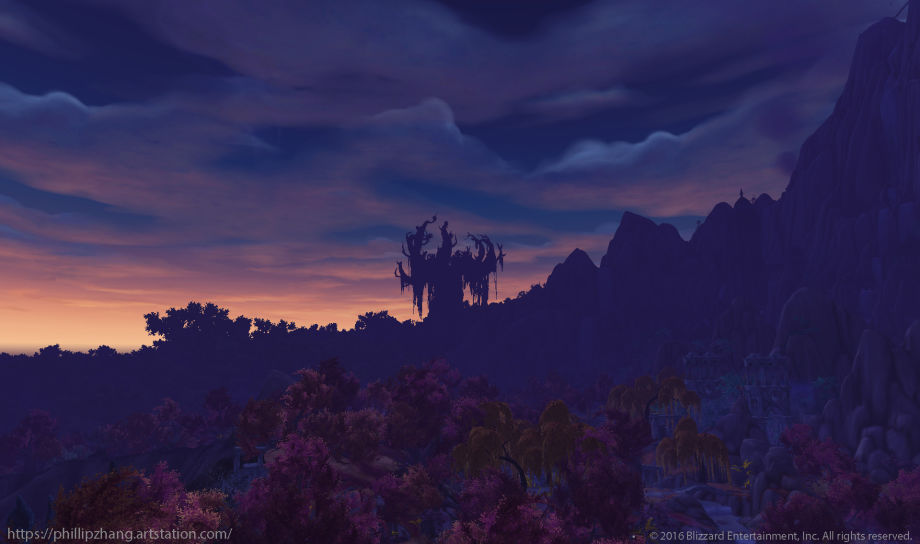 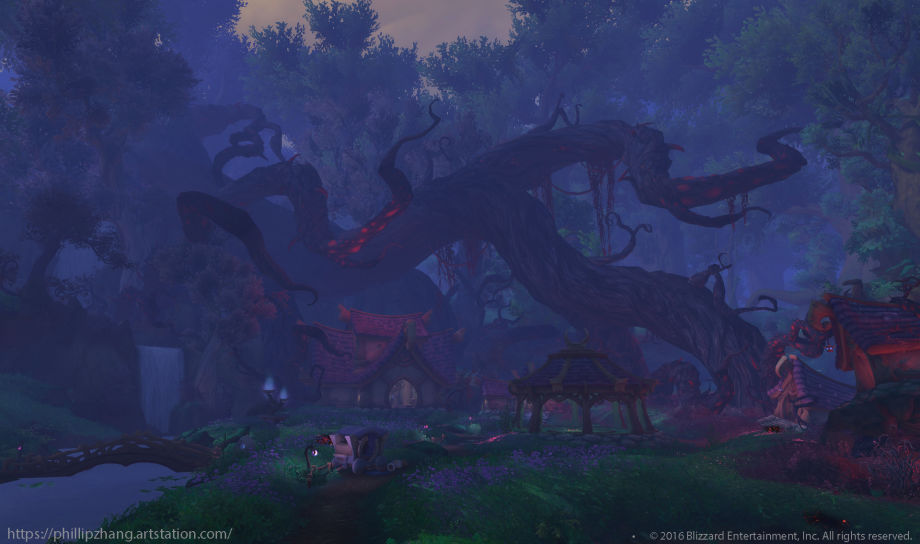 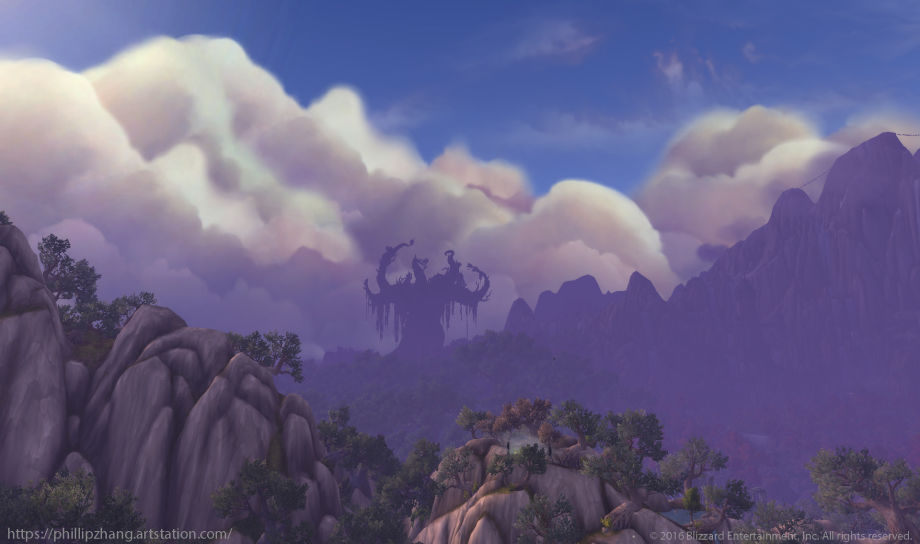 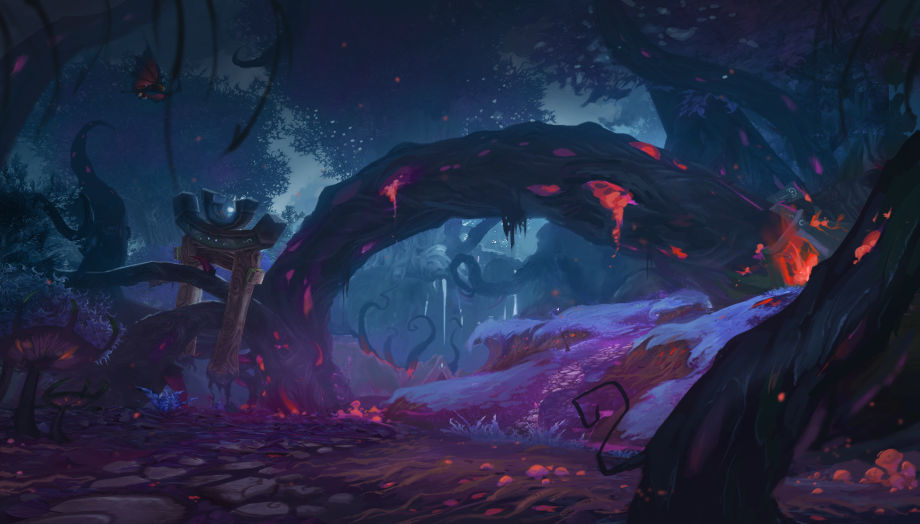 Knowledge of Traditional Painting—While attending Laguna College of Art and Design, I spent a lot of time practicing environmental painting. Although this type of practice would never be enough to teach how to paint a skybox for World of Warcraft, it helped me grasp the basics about color, lighting, and composition. This knowledge has immensely helped when I was creating matte painted skyboxes. No matter what style an artist is trying to achieve, the rules of traditional painting always apply.

Tell a story with imagination—Compared to other environment assets, a skybox offers an artist infinite amount of possibilities on its 360-degree canvas. The sky is the limit. Let the players experience your wildest imagination as an artist!

Pay attention to the flow between points of interests—At work, I talk to the level designers regularly. One thing they speak about a lot is the flow between the points of interests. When players go from one location to another in the game, the geographic flow should feel natural and easy to navigate. I believe the same theory applies to skybox matte paintings. For example, in a scene with water streams from the mountains, those streams can form a river; the river flows down into a canyon and becomes a huge waterfall. This looks much more convincing than having a waterfall appear without a source. Connecting different sources of an environment is a key to crafting a successful matte painting skybox. 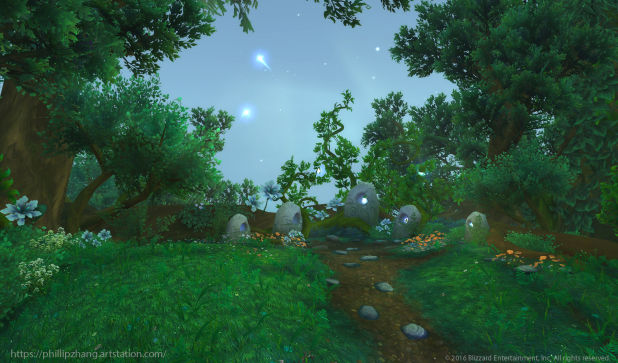 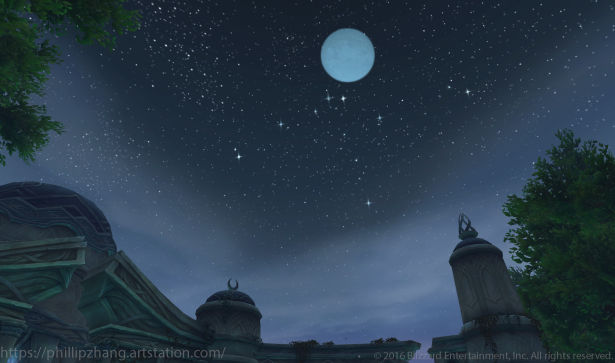 How to Create Skies for 3D Games?