Yuichiro Fujita talked about self-studying, stylized art, the difference between female and male silhouettes, and the use of contrasts for establishing focal points.

My name is Yuichiro Fujita and I'm a 3D character artist working at a game company. I'm interested in the workflow R&D for the team and new technologies/software. I can create any type of characters, from realistic to stylized.

I was inspired to pursue a career in the entertainment industry by Biohazard (GameCube ver.) that I played when I was a high school student.  The sophisticated graphics and its gameplay captivated me, and I went to a university where I could learn about entertainment. When I took the CG modeling class, I realized that it was what I wanted to do.

I don't have much to say about the work I've been involved in so far. Before the game company I'm currently working at, I worked for a 3D animation studio but the project had a strict NDA. Even when I changed jobs, I was only allowed to include my personal work in my portfolio. The consumer title I'm currently contributing to is going to be the first title I can proudly say I was involved in.

My favorite tool is Blender. Its real-time renderer EEVEE allows me to increase the number of iterations. This is what I feel is the biggest benefit. Creating shaders with nodes is also easy. I'm using Blender to improve quality in a short amount of time and in a fun way.

I connect the software/techniques I want to learn to the work I want to create. I think it's more efficient because I can learn it in practice. I don't decide which toolset to use based on whether the work is realistic or stylized.

When I was planning to start a new personal project, I heard that the ArtWar 4 challenge had already started. I participated in it because to me, it's difficult to complete a project without a deadline. I created RAIJIN - The Thundercaller and won the 3D category out of more than 400 total challenge applicants. 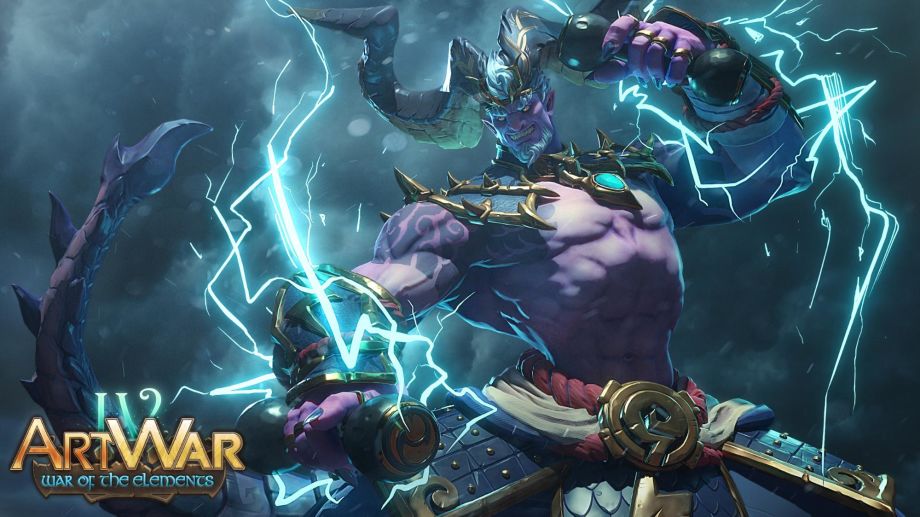 When I work on any personal project, I set goals first, and in this case, there were two:

When I participated in Artstation's  NVIDIA Metropia 2042 contest, I couldn't complete it in time but I made up my mind to finish and submit it anyway. This required me to do everything from the design stage to finishing the 3D model, creating a still image, and uploading the model to Sketchfab in about a month.

What I learned from the contest

I think that perhaps the future of the stylized genre will be distinguished by shaders (and post-process effects), and an artist with technical knowledge will play a large role in this area.

To me, the definition of stylization is omission and exaggeration. That means omitting unnecessary elements and noises from the real-life counterparts and exaggerating the remaining important elements to make it look more attractive. The important thing is what to omit and how much to exaggerate. I think we need to have a good eye to judge this, and we need to see a lot of great work on a regular basis to train that eye.

I've taken a lot of workshops. Here are some of them that were particularly important to me:

The workshop focused on character creation for 8 hours x 3 days. Up until then, I had also been doing miscellaneous tasks such as recruiting and production management, but this workshop gave me the opportunity to realize that I really wanted to create characters. After that, I put “character artist” in my social media profile, no matter what the actual situation was.

There, I learned a specific workflow for creating a realistic human and created two female portraits after that. I realized that spending money on my own education is very meaningful, and I've started taking a large number of workshops since then.

It was a seminar that introduced the theory in an understandable way and then explained how it could be put into practice. Despite the content of the workshop being outside of my area of expertise, I thought it was one of the best workshops I've taken. And I felt like I wanted to try to use the techniques I learned and do some animation.

What I've learned was that you can motivate people by teaching them in an easy-to-understand way, so I try to explain both theory and practice in my own workshop.

My biggest inspiration is Akira Toriyama, the author of Dragon Ball. I always focus on the silhouette when creating any character, but I think that feeling was fostered by copying his cartoons when I was a kid.

Other artists who have influenced me are Yoh Yoshinari, Simon Lee, Tooth Wu, Sangsoo Jeong, Bayard Wu, Maria Panfilova... and many more!

I try to browse ArtStation every day and I search for images on Pinterest when I'm working on an actual project. 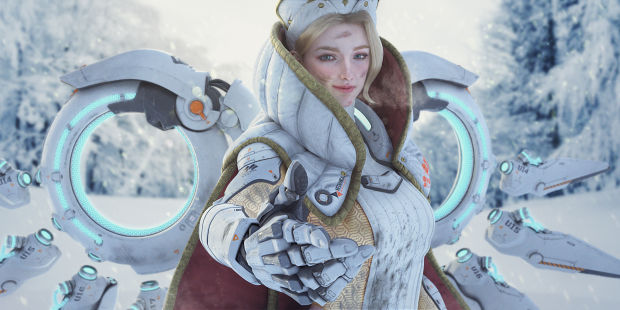 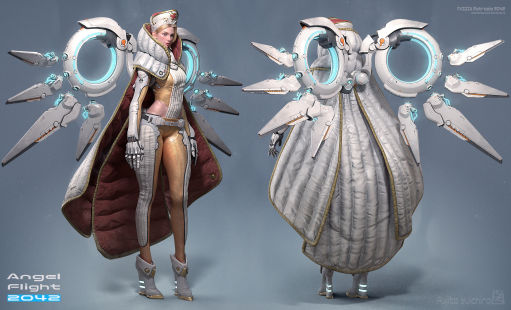 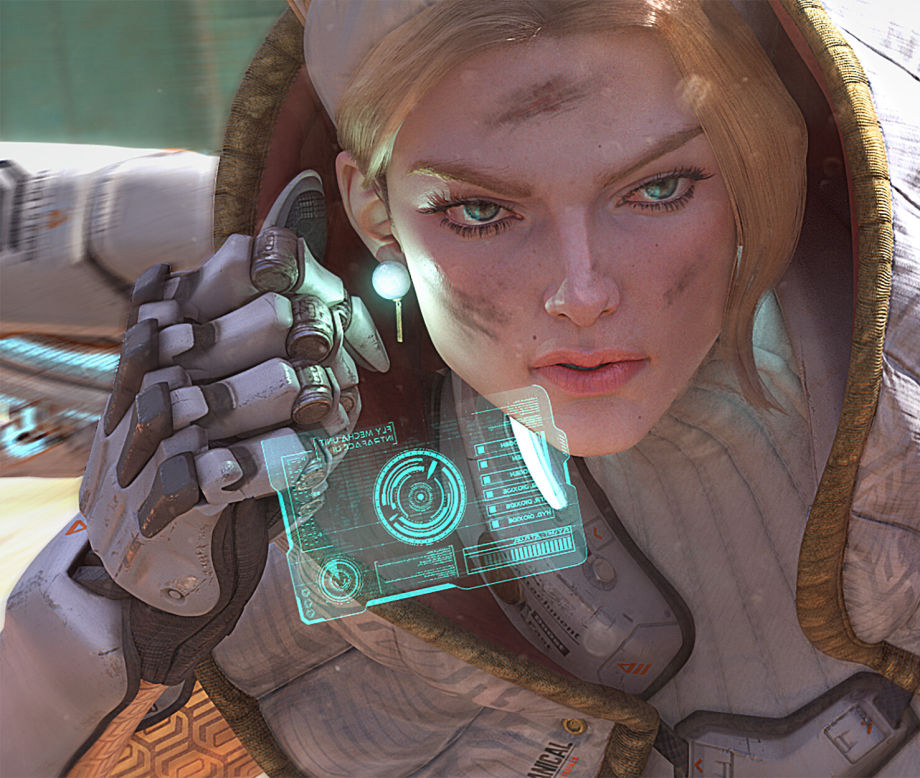 In the artwork Angel Flight 2042, I tried to portray an impression of the character as a mix of female mercy and masculine strength, and I wanted to express this idea through the silhouette.

Before I talk about it, I'd like to share my approach to capturing the differences between the silhouettes of males and females. I believe males have a convex silhouette and females – a concave silhouette. 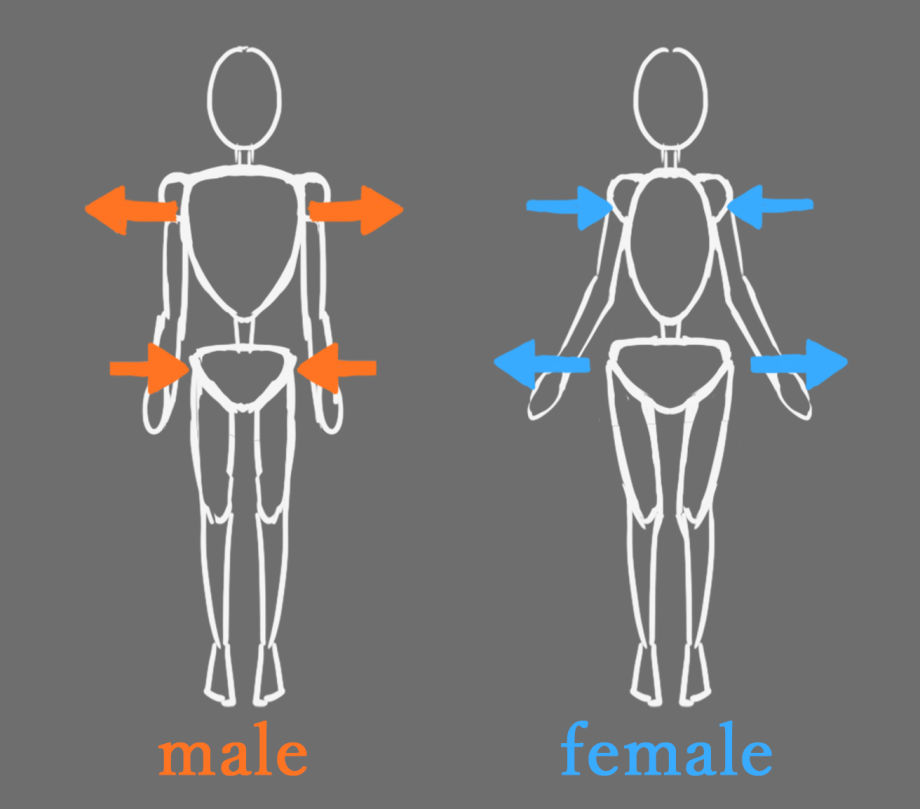 Women's arms are said to be slightly longer from the elbow to the end of the arm to avoid hitting the wide pelvis when carrying something. This angle is called the carrying angle. Similar characteristics are found in the legs, depending on the width of the pelvis. 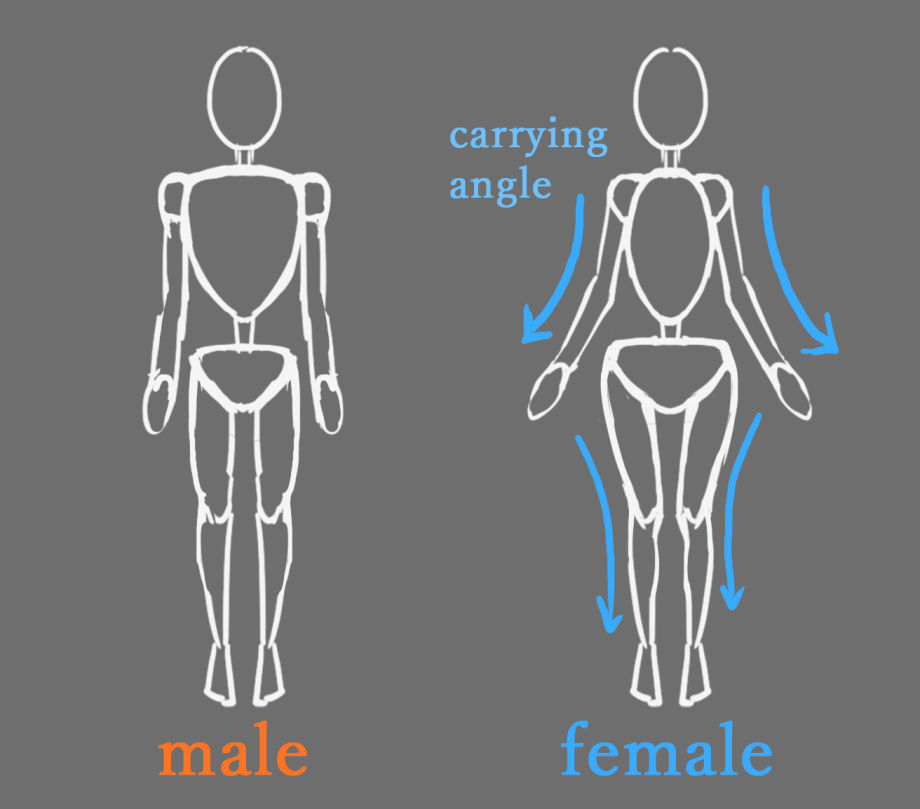 In addition, if you take into account the females' waist curves and the males' well-developed trapezius and sternocleidomastoid muscles, you can see that men have a convex silhouette and women have a concave silhouette. 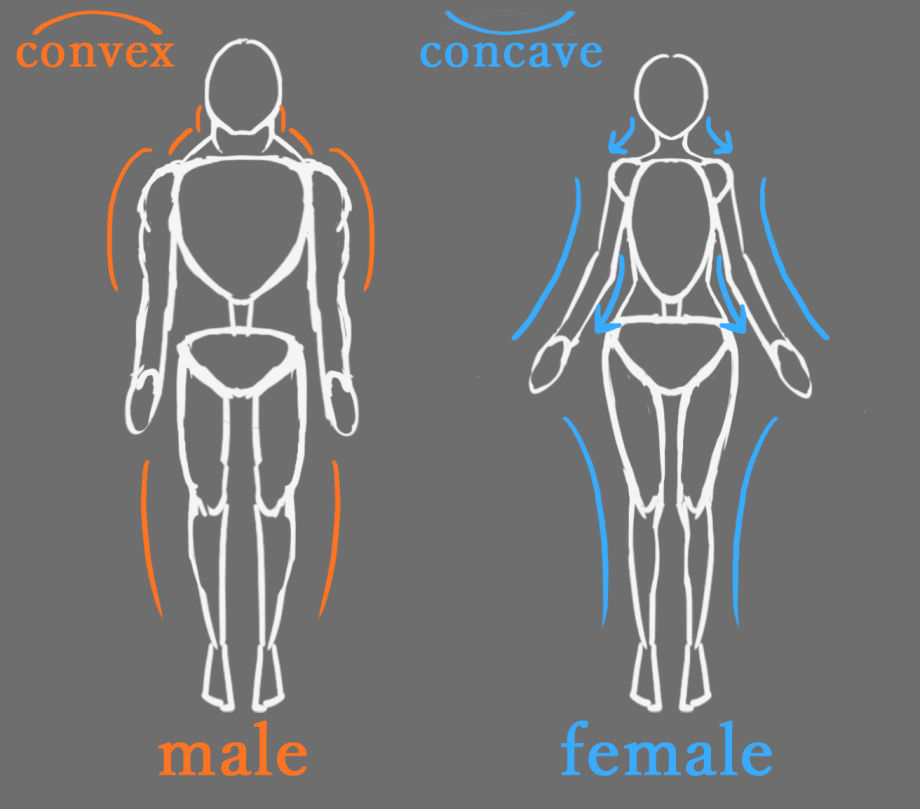 In my project Orc Bouncer, I emphasized the masculine silhouette. 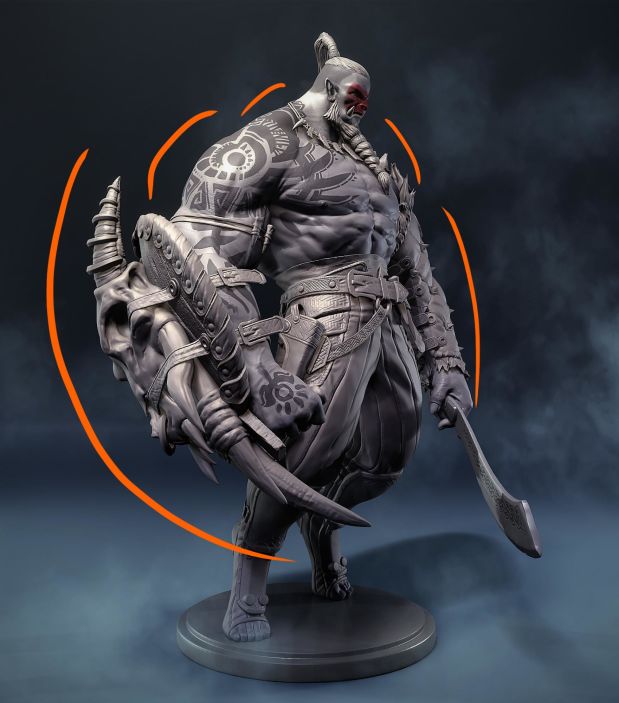 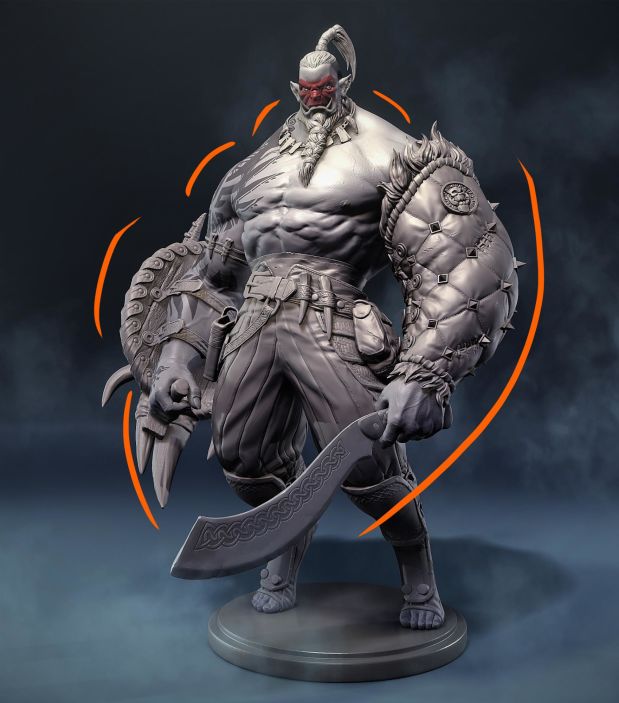 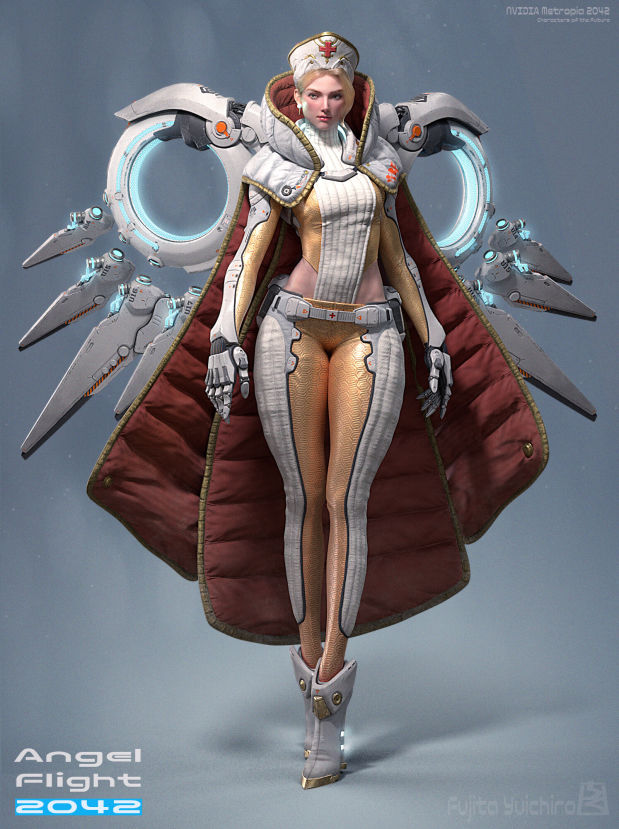 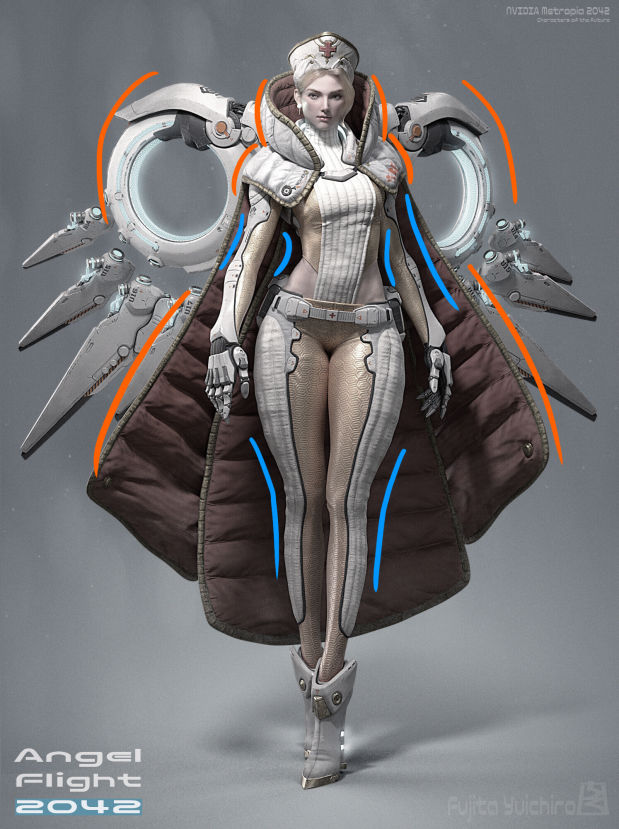 Incidentally, this kind of silhouette design can be achieved with a posing technique. Especially for shapes that may cause problems when rigging, such as carrying angles, I think it's better to use posing adjustment rather than modeling.

I was not very good at compositions and lighting. No matter how satisfying the modeling was, I was worried that the quality of the work would be degraded by the way it was presented. Therefore, I thought thoroughly about how to present the artwork. As a result, I divided the ways to control the focal point into four categories and set the rules for each of them. The four categories are ''Motion'', ''Form'', ''Color'', ''Meaning".

I can't explain the full methodology, so here's a look at the "Color" in particular I'll only talk about Value; Value is more important than Saturation and Hue.

Before getting to the main topic, here's how to check Value in your work. You can make the image grayscale to make it easier to see. The method I recommend for reducing saturation is to add a black Color Fill layer at the top of the layer in Photoshop and set the blend mode to Color. I recommend this method not only because it's easy to use, but also because it allows you to weight the brightness by hue.

Weighting by hue means that, for example, yellow appears brighter and blue appears darker. Look at the color wheel here. Doesn't the yellow area at the top left look light and the blue area at the bottom – dark? 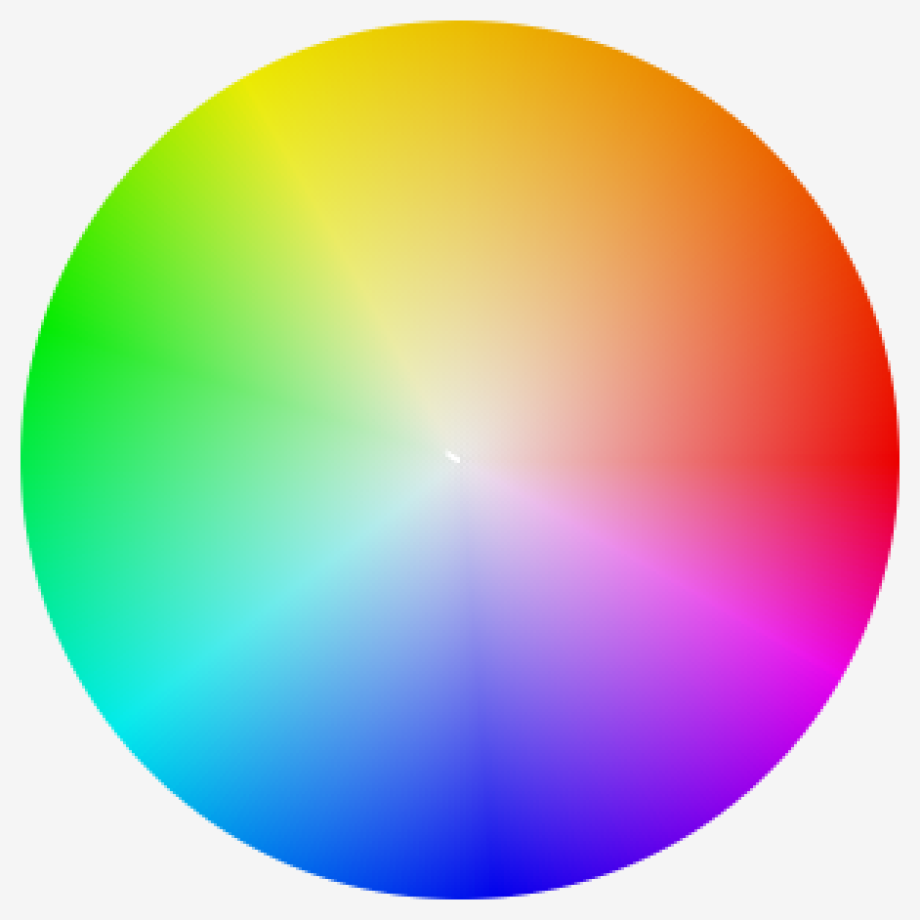 Now that I have described how to check Value, let's get to the topic at hand. The Value rule is simple: the contrast will be the focal point. The eyes are guided to the point where the contrast of value is high.

The simplest use of the Value rule is to add a contrast of Value to the areas you want to show. On the other hand, you should reduce the contrast of the background and foreground, for various reasons such as aerial perspective, fog, depth of field, or anything.

In this piece, the strongest Value contrast is around the dragon's face. The viewer tries to look at the character's face unconsciously. By guiding the viewer's eyes naturally to what they want to see (the face), you allow them to enjoy the work without stress.

You can also use the Value rule in the opposite way. The idea is to deliberately reduce the contrast of what the viewer wants to see (usually the face). This can cause discomfort and stress to the viewer. I think this technique is often used in works of horror and mystery genres. 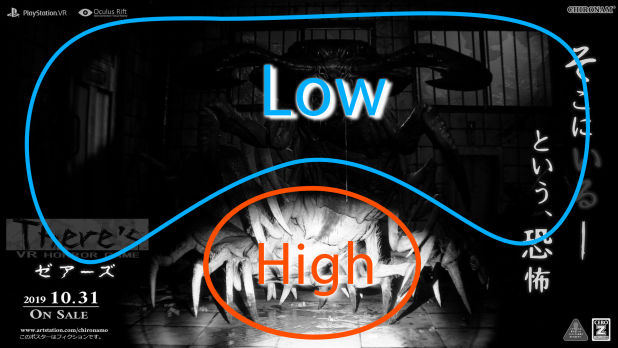 Here's another example of using the Value rule in the opposite way. This is particularly effective with human characters. Have you ever found artwork that has a character's face in the shadows and felt strange? Why reduce the contrast on the face when the place you want to show the most in your character should be the face? 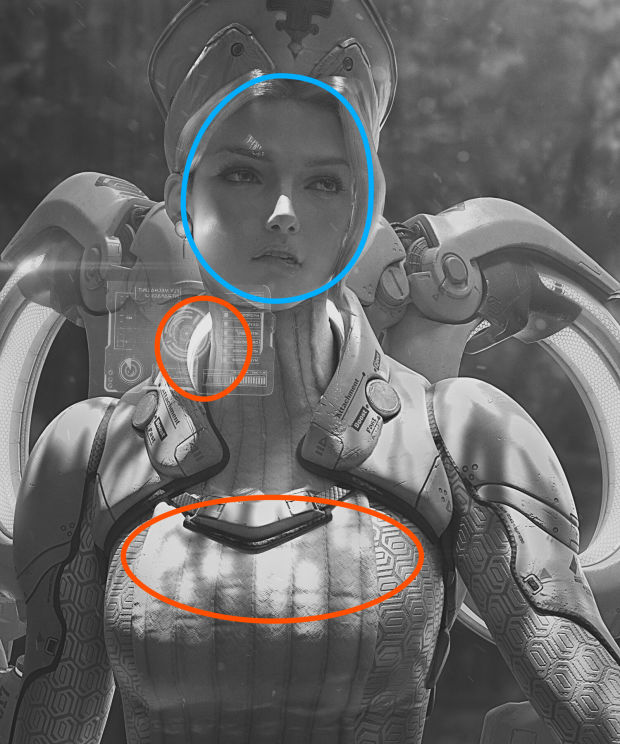 In this image, I deliberately reduced the contrast of the character's face by putting it in the shadows. I wanted to draw the viewers' attention to the work by encouraging them to actively observe it. If the face had a contrast, the viewer might be satisfied with a quick glance and lose interest in the work. Whether it's Artstation or Twitter, a piece of work posted online is often viewed in the thumbnail form at first, surrounded by other works. If the viewers aren't actively motivated to see more, their eyes will quickly leave your work.

However, even if the Value contrast of the face itself is lowered, directing the viewer's eye towards it by placing high contrast near the face is a good way to avoid causing stress (like in Case 2).

Another reason to put the face in shadow is to make a woman's face look beautiful and tender. For the same reason, backlighting is often used in female portraits.

Here, I only focused on the Value rule of "Color", but in the project, I combined it with "Motion", "Form" and "Meaning" to create a composition.

What the Future Holds

In creating realistic characters, modeling work might no longer be necessary. Instead, skills of adjusting and editing 3D scanned data will be required.

Modeling work will still be required for stylized characters, however, in the quest for more attractive visuals, I think the game industry will accelerate the pursuit of 2.5D effect by using shaders/post-process. In this context, real-time post-processing effects that use AI to make the image look painterly, for example, might be born. It's exciting just to think about it.

But no matter what technologies appear in the future, I think it's important to stay curious and enjoy the process.