Martin Molnar talked about 1987 scene made in UE4 and described how he added the snow and worked on winter materials.

Martin Molnar talked about 1987 scene made in UE4 and described how he added the snow and worked on winter materials.

Hi! My name is Martin Molnar, I’m a Level Artist and a Level Designer from Slovakia. I started with Level Design around 8 years ago in Counter-Strike Source’s Hammer where I started working on maps for a game mode called JailBreak which was all I mostly played back then.

A year later, I moved to Garry’s Mod and started doing freelancing for various communities and teach others the basics and fundamentals of the Source Engine.
In 2016, I started experimenting with Unreal Engine and other engines, but Unreal worked out the best for me with its quick workflow.

Currently, I’m still doing freelance on the side and looking for a job in the industry. 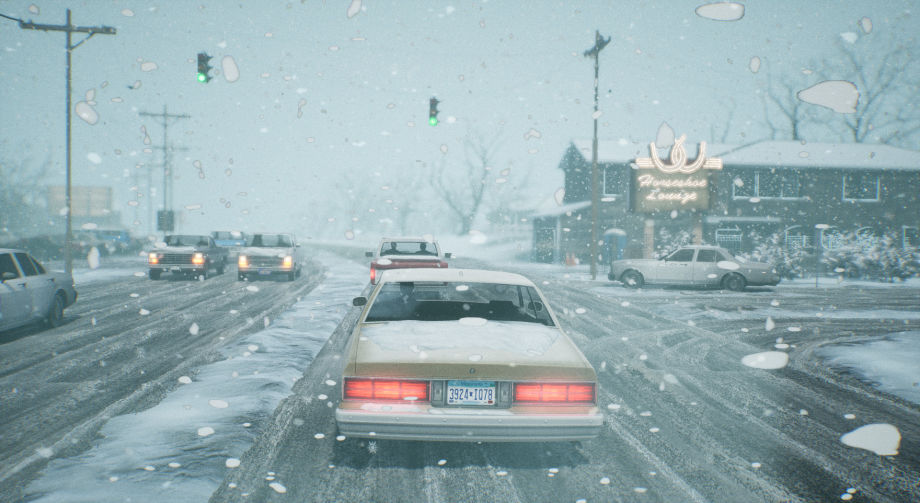 The main inspiration was actually a cover of Amtrac’s 1987 album, which is what I mostly listened to while creating the scene. At the time I found out about Amtrac’s 1987 album, I instantly fell in love with the way it looked and knew I had to recreate it inside the Unreal Engine. 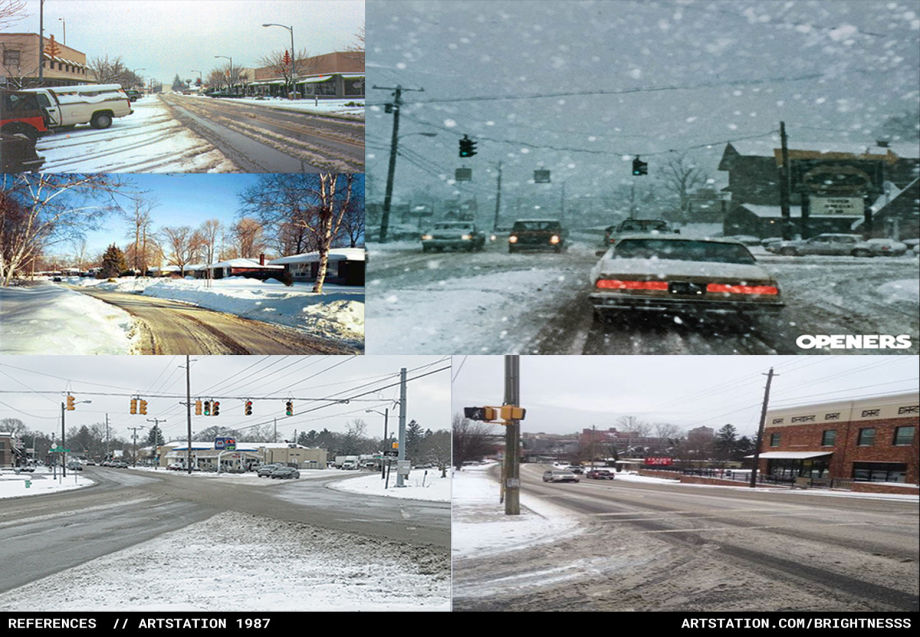 I first started with creating a really simple terrain using Unreal’s landscape tool before placing road splines and getting the scene shaped. Always figure out your scale before proceeding to the modeling part. In my case, I used the default UE4 character model as a reference to the scale.

When I’m happy with the composition visually, I usually set up a couple of cameras, change the FOV, skylight, and directional light and add some fog that roughly represents the color of the scene that I’m going for.

Since I know this is a portfolio piece, I tend to use more expensive rendering techniques and focus my efforts on making sure the shots look good.

I usually make an asset list and then start with the most important meshes that shape up the scene and are the most iconic. The vehicles were made by the talented Kanistra Studio and as for drivers and passengers, I used a simple blockout of UE4’s Mannequin with a darker color. Since the mannequin was sticking out, I had to shorten some of its bones to fit in the car properly and make an illusion of them sitting in the car seats. The buildings were pretty low poly and simple, and I feel like textures play a bigger role here. For this building, I tried to recreate a typical American country restaurant.

There are definitely multiple ways to accomplish a winter look. Everything depends mostly on what you’re working on – either a portfolio piece with a few camera angle shots or a playable environment. For this piece, I chose a base snow blend material for the snow coverage, but for larger environments, I would suggest making a shader that automatically applies a snow material on the Z axis.

For the falling snow, I chose a snow particle effect and added fake 2D planes to give it more thickness.

The snow chunks on top of the cars and some objects are just a simple geometry mesh of a small hill scaled down. Each chunk is stretched out differently to give it a non-repetitive feel, with the base snow material applied.

Additionally, since this shot is taken behind the car windshield, I’ve added a glass material plane in front of the camera and a decal with some snowflakes to emphasize the falling snow.

Cars play a big role in this scene, so I modified the textures for them in Substance Painter and Designer to have a soft snow layer on top.

Most of my texturing start in Substance Designer and subsequently move to Painter for PBR materials. 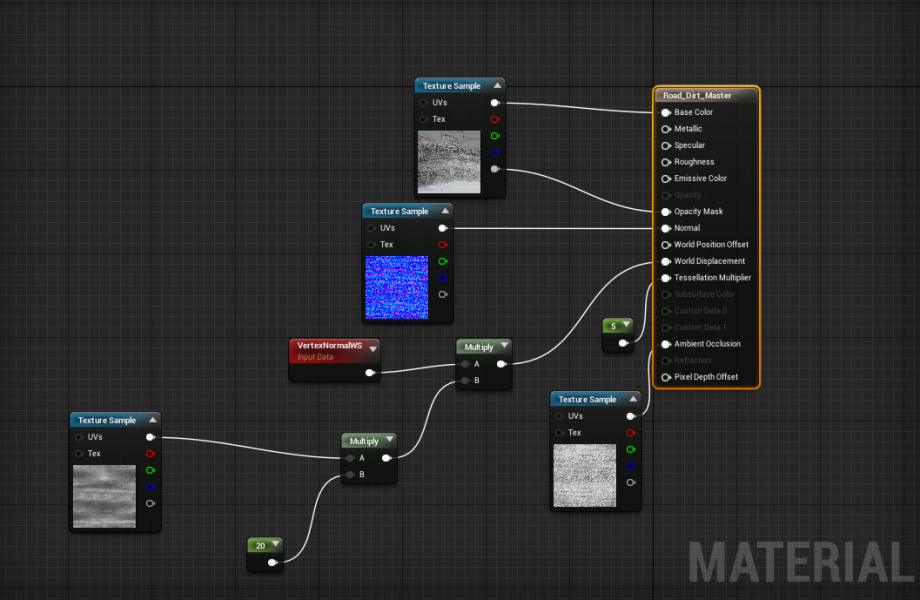 Since this was mostly a remake of the reference I mentioned above, I didn’t want to change the lighting too much because I felt satisfied with it already. To create the scene’s look, I used Unreal’s Volumetric Fog in combination with a stronger skylight, car lights, and a bright green light for the traffic lights. You don’t want to over clutter the screen with lights which are going to easily distract the viewer and ruin the focus of the scene. In this case, the focus was on the road fork and the country restaurant.

There’re two primary ways to get an old school look when lighting up the scene:

You also want something to contrast the cold atmosphere and help balance the color scheme for the composition, for example, an ongoing fire, a warmer light post, or a green traffic light. 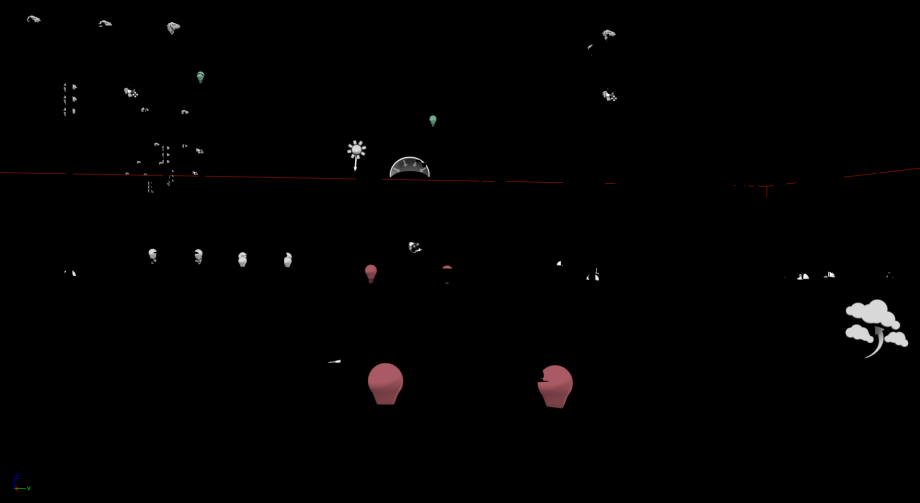 Thanks to 80.lv for giving me the opportunity of writing this. It was a pleasure to be interviewed by the team.