Dejan Cicic, the founder of 3dmodels-textures, gave a brief talk about his store, modeling of the vehicles, and the way his models can be used in Sinespace.

Dejan Cicic (Dexsoft), the founder of 3DModels-Textures, gave a brief talk about his store, modeling of the vehicles, and the way his models can be used in Sinespace.

Hello! My name is Dejan Cicic, I’m from Serbia and I’m the founder of 3dmodels-textures company.

In 2009, I started to work as a producer of educative games for children in 2D. As time passed by, I began to work with 3D programs and platforms as well. When I started to work in this industry, there weren’t many game models on the market, so I had to learn how to become a modeler on my own. I had learned everything alone, with the help of different apps and programs such as Softimage and other modeling tools.

In the beginning, I worked with only one partner who was a game artist. Together, we created many game-ready models and game assets as well as bought some amazing models from other 3D modelers.

Today, our team is still small in size and has 2 people onboard. We produce our own 3D models for our modern marketplace that has over 10.000 game assets, 3D models, textures, sound effects, music, and 2D game assets! We tried to create an ideal place for other game developers and cover almost all game types and themes like sci-fi (SF), medieval, fantasy, modern, and cartoon. With over 200 animated characters we can provide a great start for game creators who want to start their own projects. We also offer memberships which grant you ALL game assets for one single payment. Our focus is on indie game developers as we want to support them in their journey of game creation.

First of all, I’d say that the important parameters of a successful model are:

I personally love to model vehicles, and this is why the post-apocalyptic series of vehicles eventually appeared. The inspiration for these series was my first vehicle model Viper Scout. This is one of my favorite models partly inspired by the movie Mad Max. Some of its parts were later used in the production of other vehicle models, for example, the metal bumpers. In the future, I’m also planning to make some heavy trucks and buses.

The biggest challenge was to decide on the type of vehicle and the design of its “armor”.

First of all, I made a base of the vehicle and then added some external elements such as armor, wheels, doors, and other things. All base modeling is done in Maya and then exported to 3D Coat. There, I made all the UV maps and then painted them using PBR materials (every vehicle in this series has 3 materials: for the interior, exterior, and other details). After this, I added a few dirt and rust layers, and emblem decals.

To my mind, 3D Coat is very similar to Substance Painter. I didn’t use Photoshop because 3D Coat actually has a system of layers close to the one in Photoshop.

Once I gave the guys from SineWave the Unity package, they optimized and adapted the vehicles for Sinespace. You can check them out here. Since the vehicles are adapted, the players can easily create their own racing tracks and use my models to drive and compete with others.

Note from Sine Wave: To create your own vehicles, you only need Sinespace modular vehicle component configured to your vehicle model.

Using the event system, you can set the vehicles to have animated doors, headlights turn on or off, add a rear view mirror or speedometer appear or disappear when a person enters the vehicle.

The secondary camera field allows you to set up multiple cameras to the cars, which is controlled by the C key in Sinespace. Here on Dexsoft vehicles, we have set up three cameras, far view, close up view, hood only view, and a rear view. You can also add a view that is set up inside the car and shows the player avatar. The engine sound components let you quickly add sound effects for events like car start, stop, drive and when the car hits an object.

The air time options lets you set up action shot cameras for air time jumps. Giving users a complete feel of racing game cars. There also override FOV, that allows users to modify camera FOV as per the speed of the car. 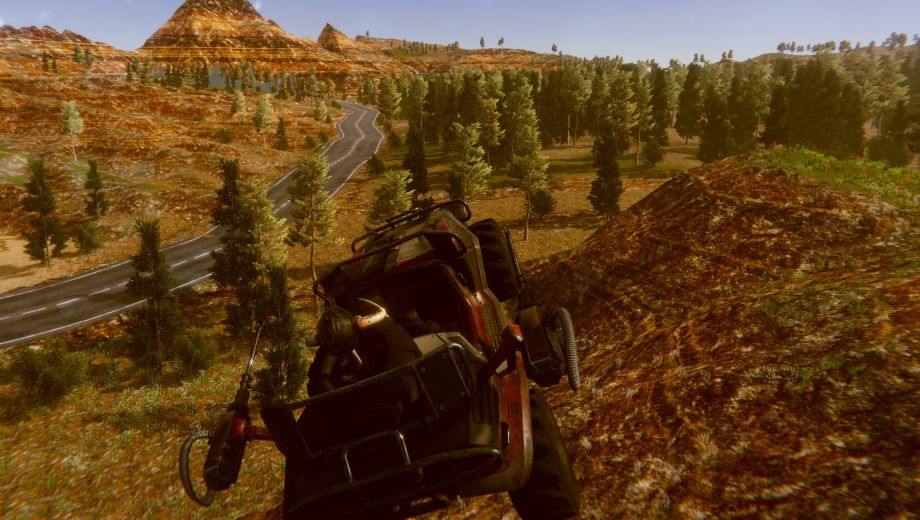 For rear view mirror effect, we used a render camera on UI and added it as activate on player enter event. We used lens dirt to give an old worn out looking glass effect. Each wheel has the option to add particle effects like tire skid, dust, or skid sounds and suspension sounds.

The speedometer component allows you to add a digital or analog speedometer to the cars. The analog meter you will have to animate the needle and use the animator field to place it in.

There are a ton of options to make a really high-quality drivable vehicle in Sinespace. Whenever you want to upload a drivable vehicle, you will need to add this component to the vehicle model and set it up. You can see how all of the settings work on the Vehicles wiki page here.

When it comes to the same package on Unity Asset Store or 3dmodels-textures, you can make any kind of change you want to the vehicle after it’s purchased.