Ming-Lun “Allen” Chou allowed us to repost his amazing article that gives a behind-the-look at the AI in Uncharted 4.

Ming-Lun “Allen” Chou allowed us to repost his amazing article that gives a behind-the-look at the AI in Uncharted 4.

Now that Uncharted 4 is released, I am able to talk about what I worked on for the project. I mostly worked on AI for single-player buddies and multiplayer sidekicks, as well as some gameplay logic. I’m leaving out things that never went into the final game and some minor things that are too verbose to elaborate on. So here it goes:

Before I start, I’d like to mention the post system we used for NPCs. I did not work on the core logic of the system; I helped writing some client code that makes use of this system.

Posts are discrete positions within navigable space, mostly generated from tools and some hand-placed by designers. Based on our needs, we created various post selectors that rate posts differently (e.g. stealth post selector, combat post selector), and we pick the highest-rated post to tell an NPC to go to. 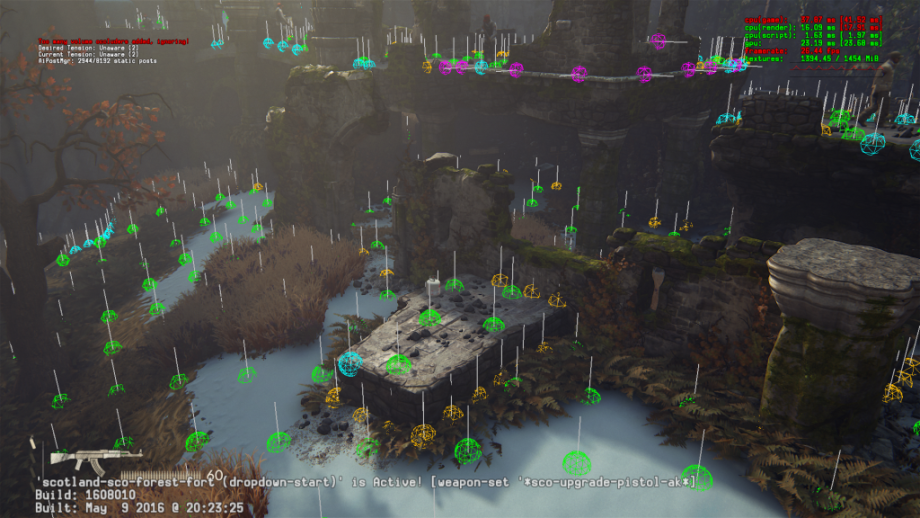 The buddy follow system was derived from The Last of Us. 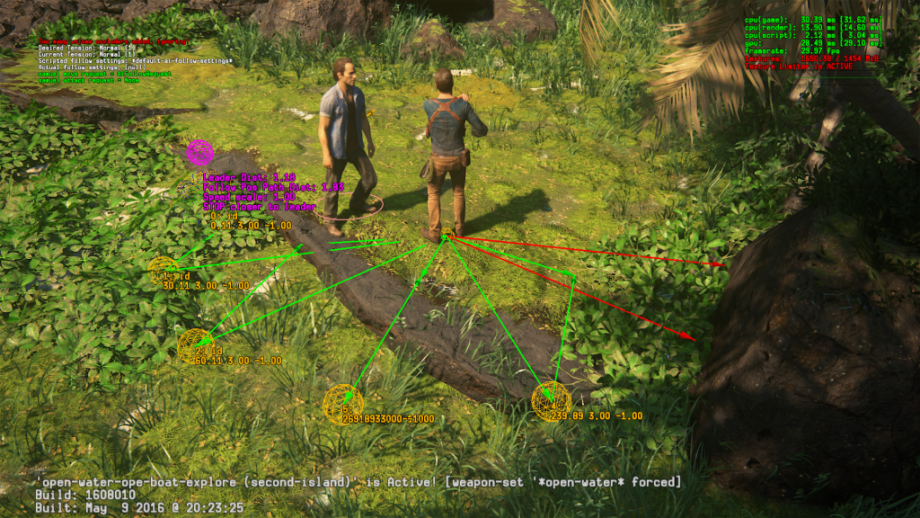 Climbing is something present in Uncharted 4 that is not in The Last of Us. To incorporate climbing into the follow system, we added the climb follow post selector that picks climb posts for buddies to move to when the player is climbing. 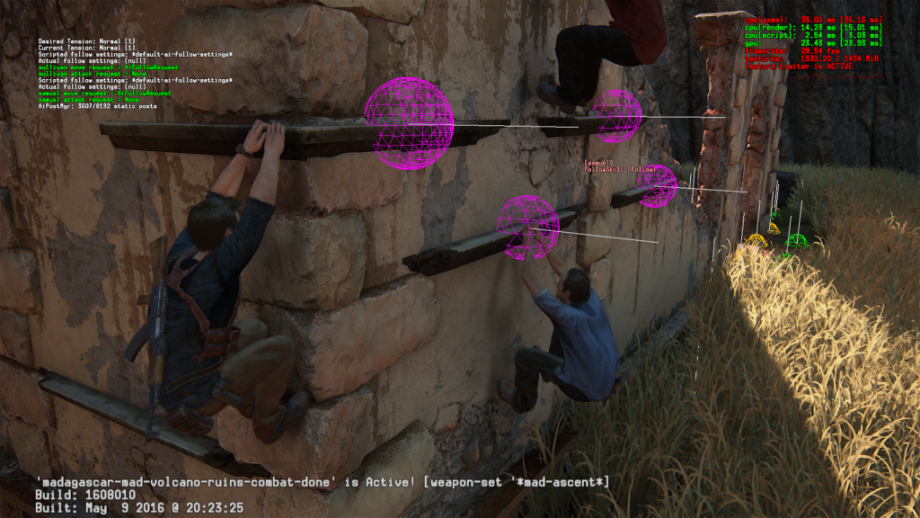 It turned out to be trickier than we thought. Simply telling buddies to use regular follow logic when the player is not climbing, and telling them to use climb posts when the player is climbing, is not enough. If the player quickly switch between climbing and non-climbing states, buddies would oscillate pretty badly between the two states. So we added some hysteresis, where the buddies only switch states when the player has switched states and moved far enough while maintaining in that state. In general, hysteresis is a good idea to avoid behavioral flickering. 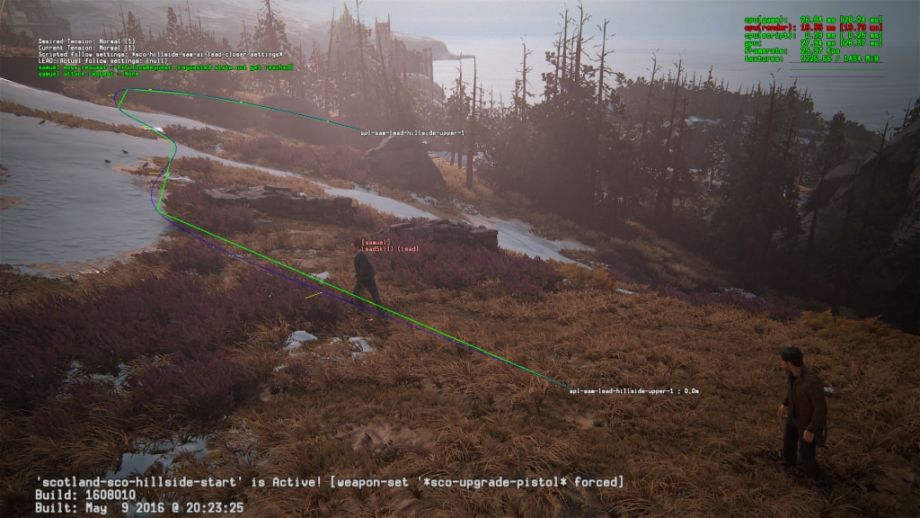 In case of multiple lead paths through a level, designers would place multiple splines and turned them on and off via script. 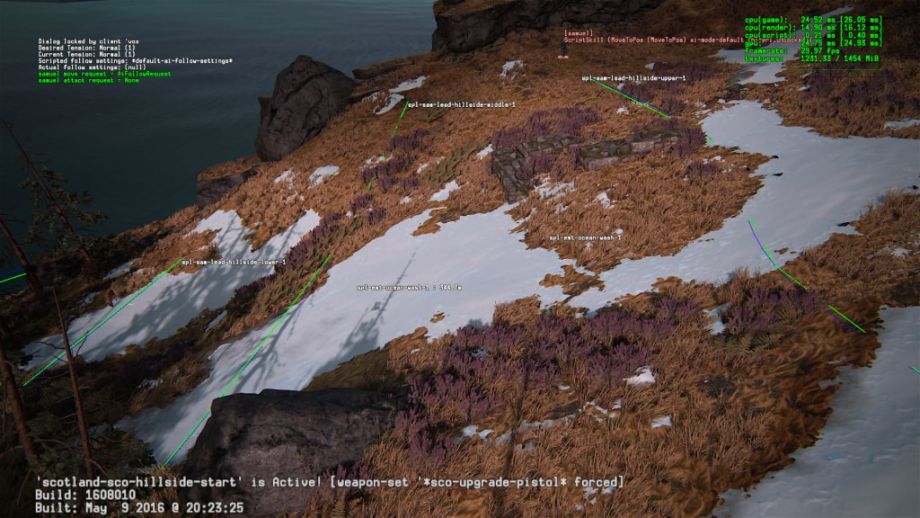 We also incorporated dynamic movement speed into the lead system. “Speed planes” are placed along the spline, based on the distance between the buddy and the player along the spline. There are three motion types NPCs can move in: walk, run, and sprint. Depending on which speed plane the player hits, the buddy picks an appropriate motion type to maintain distance away from the player. Designers can turn on and off speed planes as they see fit. Also, the buddy’s locomotion animation speed is slightly scaled up or down based on the player’s distance to minimize abrupt movement speed change when switching motion types. 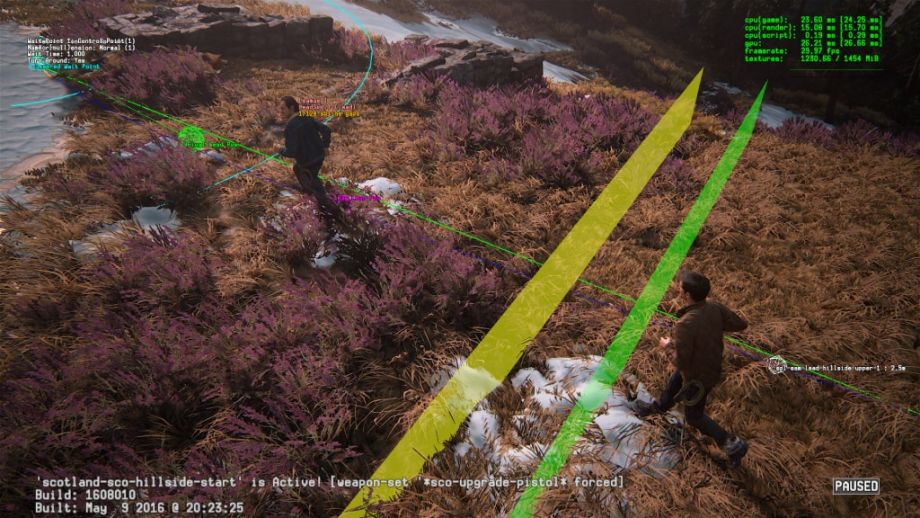 In The Last of Us, the player is able to move past a buddy while both remain in cover. This is called cover share. 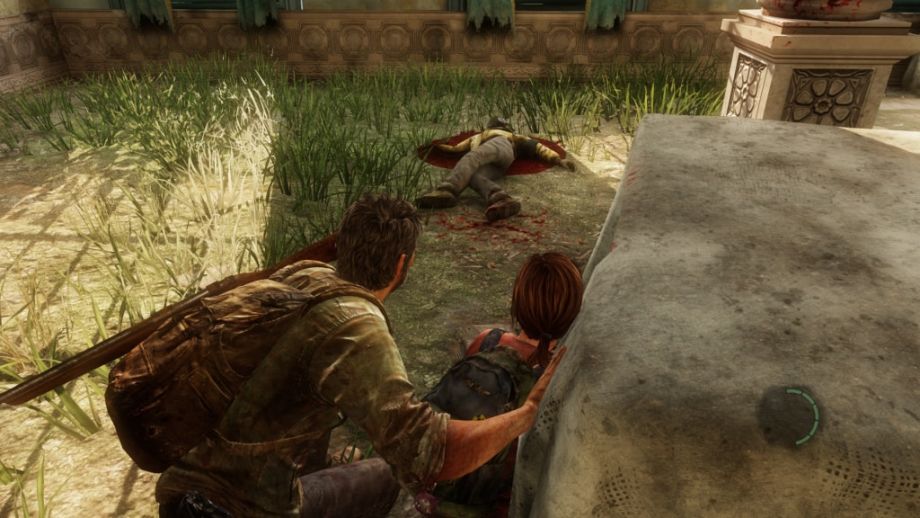 In The Last of Us, it makes sense for Joel to reach out to the cover wall over Ellie and Tess, who have smaller profile than Joel. But we thought that it wouldn’t look as good for Nate, Sam, Sully, and Elena, as they all have similar profiles. Plus, Uncharted 4 is much faster-paced, and having Nate reach out his arms while moving in cover would break the fluidity of the movement. So instead, we decided to simply make buddies hunker against the cover wall and have Nate steer slightly around them.

The logic we used is very simple. If the projected player position based on velocity lands within a rectangular boundary around the buddy’s cover post, the buddy aborts current in-cover behavior and quickly hunkers against the cover wall. 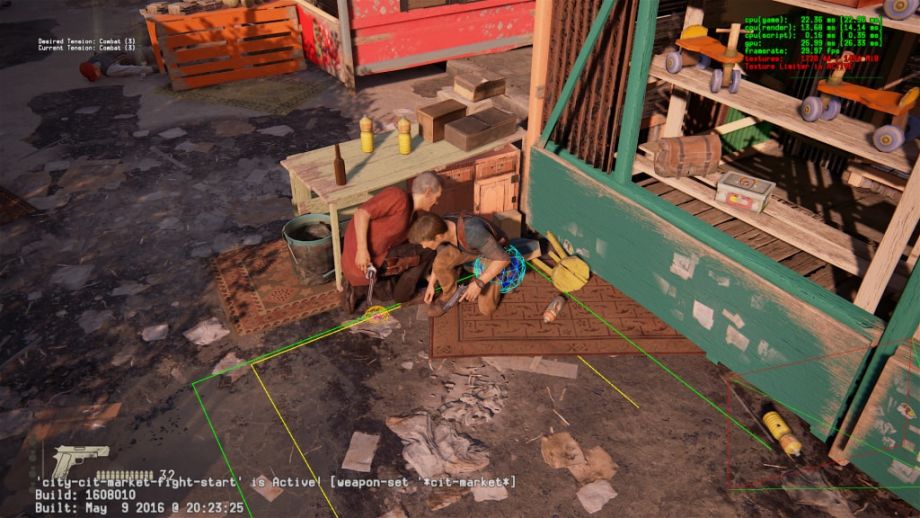 Medic sidekicks in multiplayer required a whole new behavior that is not present in single-player: reviving downed allies and mirroring the player’s cover behaviors. 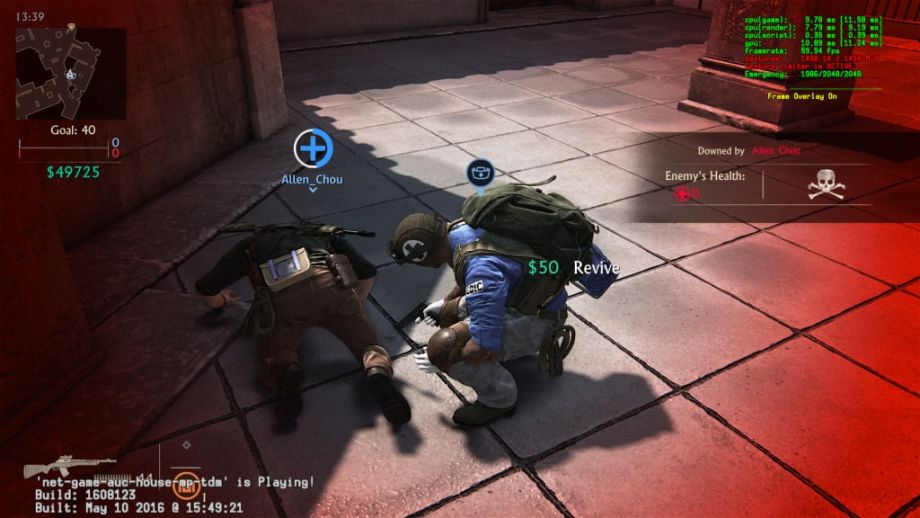 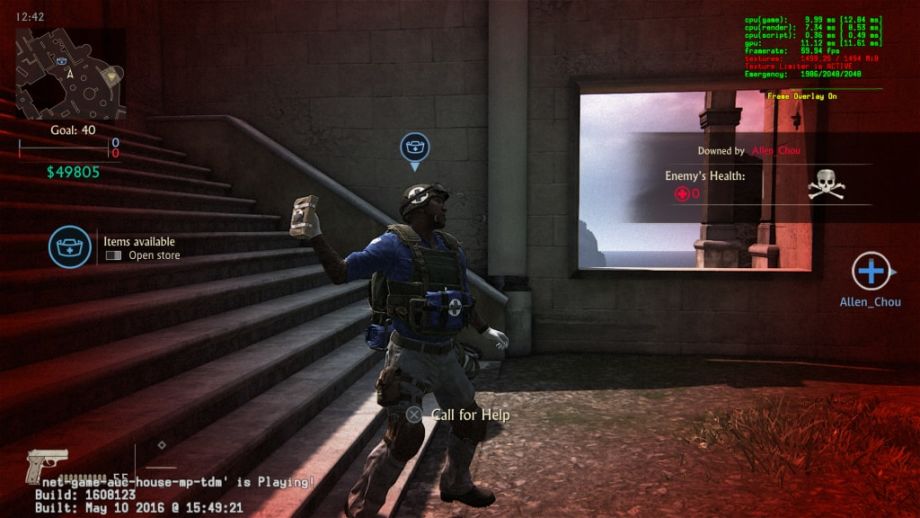 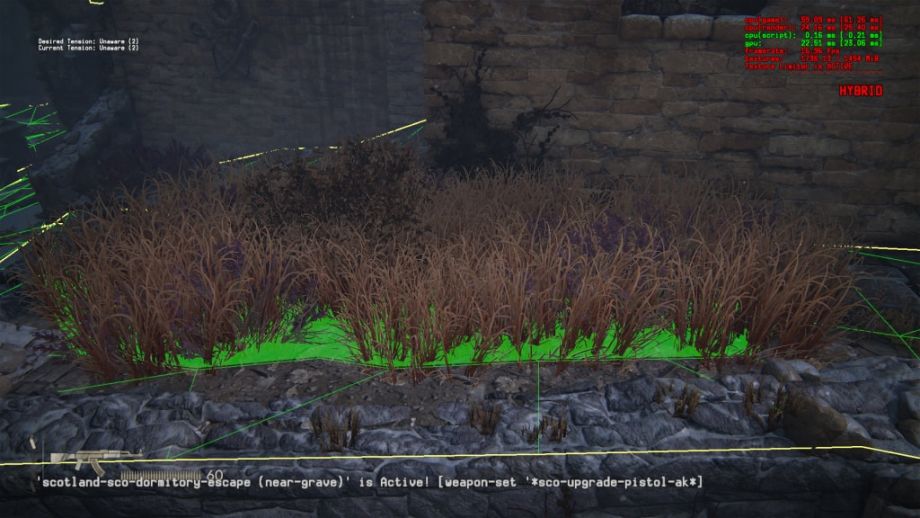 Since we don’t have listen mode in Uncharted 4 like The Last of Us, we needed to do something to make the player aware of imminent threats, so the player doesn’t feel overwhelmed by unknown enemy locations. Using the enemy perception data, we added the colored threat indicators that inform the player when an enemy is about to notice him/her as a distraction (white), to perceive a distraction (yellow), and to acquire full awareness (orange). We also made the threat indicator raise a buzzing background noise to build up tension and set off a loud stinger when an enemy becomes fully aware of the player, similar to The Last of Us. 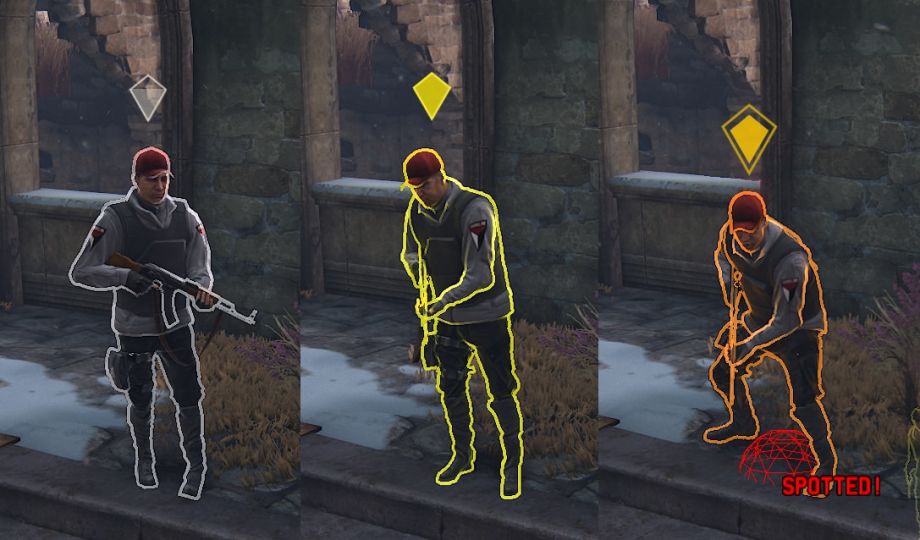 This is the last major gameplay feature I took part in on before going gold. I don’t usually go to formal meetings at Naughty Dog, but for the last few months before gold, we had a at least one meeting per week driven by Bruce Straley or Neil Druckmann, focusing on the AI aspect of the game. Almost after every one of these meetings, there was something to be changed and iterated for the investigation system. We went through many iterations before arriving at what we shipped with the final game.

In order to make the start and end of investigation look more natural, we staggered the timing of enemy movement and the fading of threat indicators, so the investigation pair don’t perform the exact same action at the same time in a mechanical fashion. 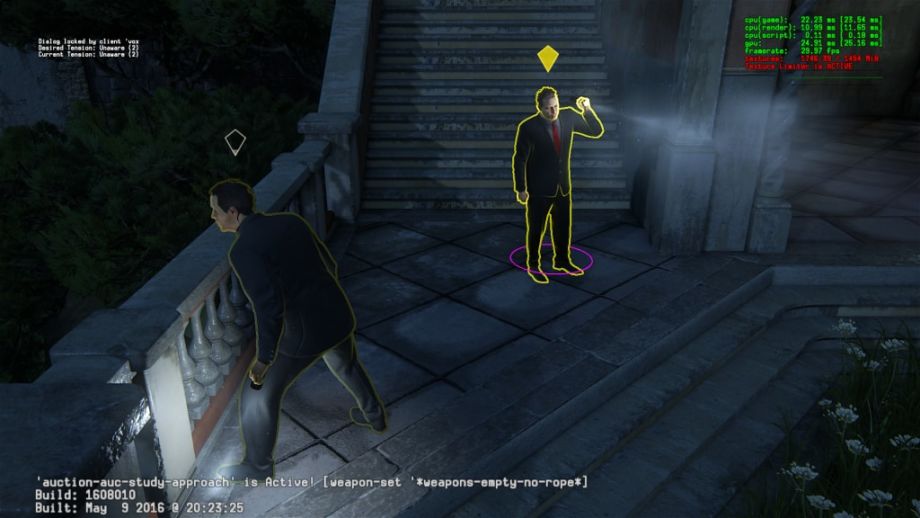 If the distraction is a dead body, the investigator would be alerted of player presence and tell everyone else to start searching for the player, irreversibly leaving ambient/unaware state. The dead body discovered would also be highlighted, so the player gets a chance to know what gave him/her away. 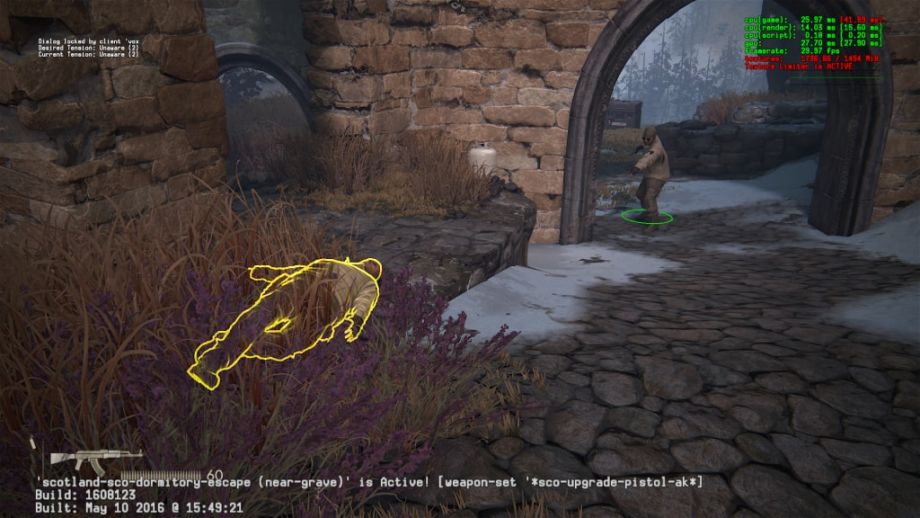 This is also among the last few things I helped out with for this project.

Dialog looks refers to the logic that makes characters react to conversations, such as looking at the other people and hand gestures. Previously in The Last of Us, people spent months annotating all in-game scripted dialogs with looks and gestures by hand. This was something we didn’t want to do again. We had some scripted dialogs that are already annotated by hand, but we needed a default system that handles dialogs that are not annotated. The animators are given parameters to adjust the head turn speed, max head turn angle, look duration, cool down time, etc. 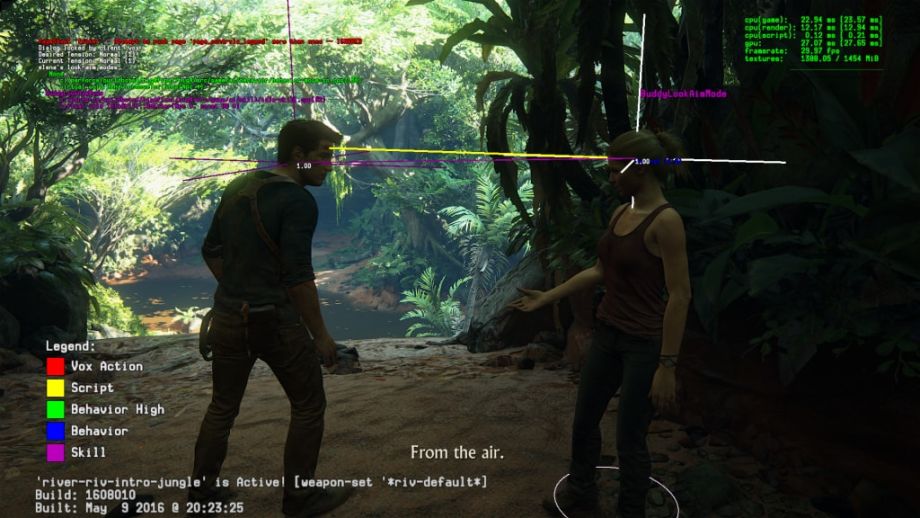 One of the problems we had early on regarding the jeep driving section in the Madagascar city level, is that the player’s jeep can easily spin out and lose momentum after hitting a wall or an enemy vehicle, throwing the player far behind the convoy and failing the level.

My solution was to temporarily cap the angular velocity and change of linear velocity direction upon impact against walls and enemy vehicles. This easy solution turns out pretty effective, making it much harder for players to fail the level due to spin-outs. 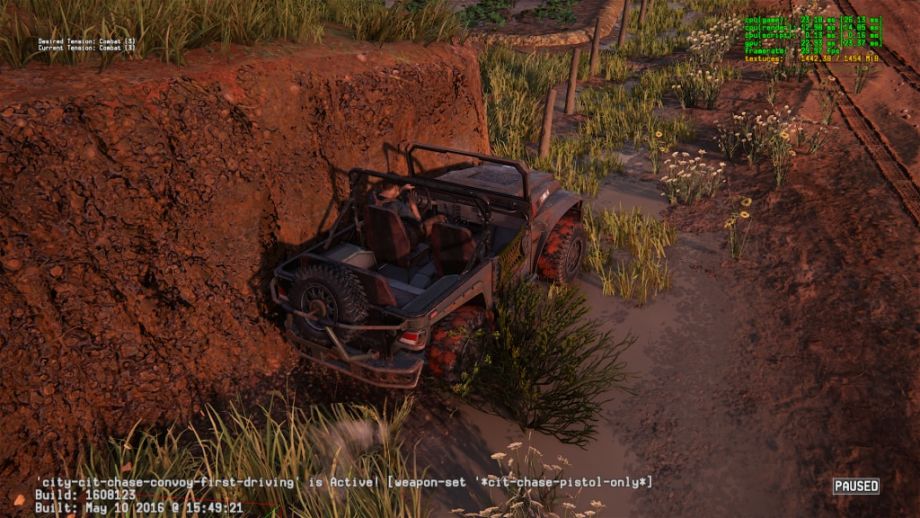 Driveable vehicles are first introduced in Uncharted 4. Previously, only NPCs can drive vehicles, and those vehicles are constrained to spline rails. I helped handling vehicle deaths.

There are multiple ways to kill enemy vehicles: kill the driver, shoot the vehicle enough times, bump into an enemy bike with your jeep, and ram your jeep into an enemy jeep to cause a spin-out. Based on various causes of death, a death animation is picked to play for the dead vehicle and all its passengers. The animation blends into physics-controlled ragdolls, so the death animation smoothly transitions into physically simulated wreckage. 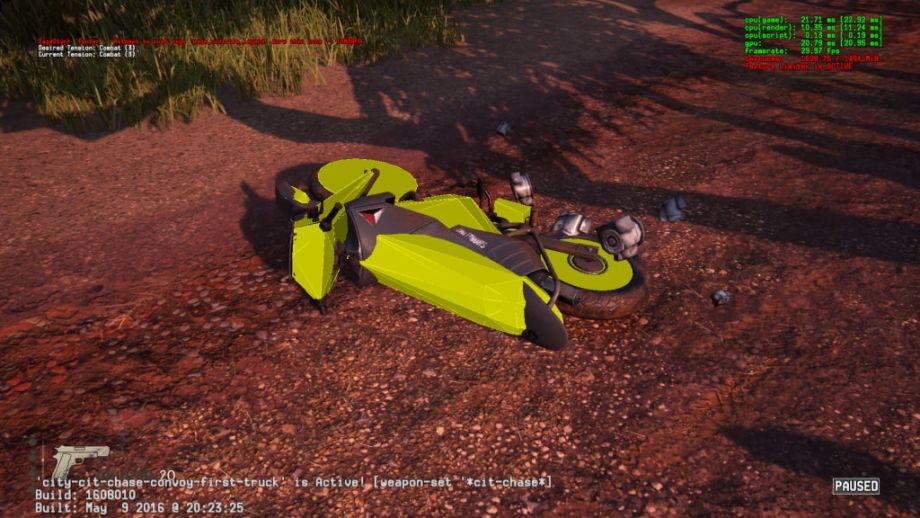 For bumped deaths of enemy bikes, we used the bike’s bounding box on the XZ plane and the contact position to determine which one of the four directional bump death animations to play. 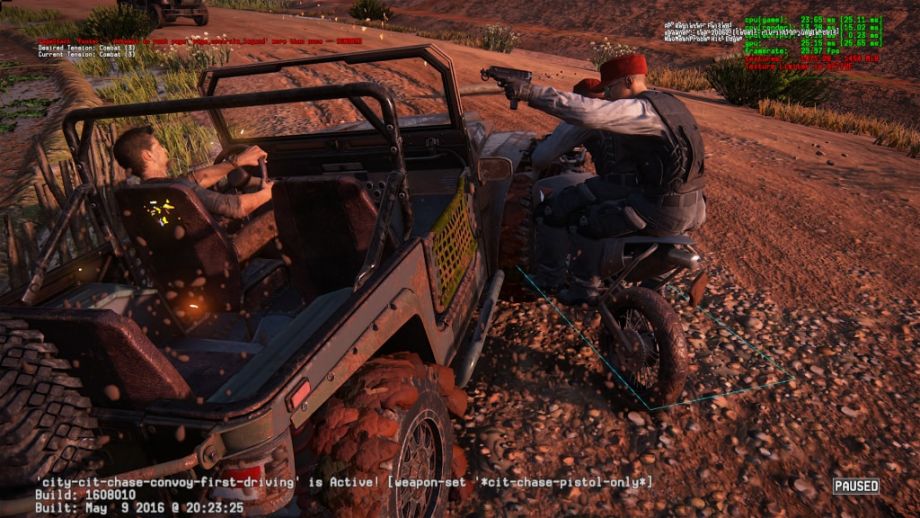 As for jeep spin-outs, the jeep’s rotational deviation from desired driving direction is tested against a spin-out threshold. 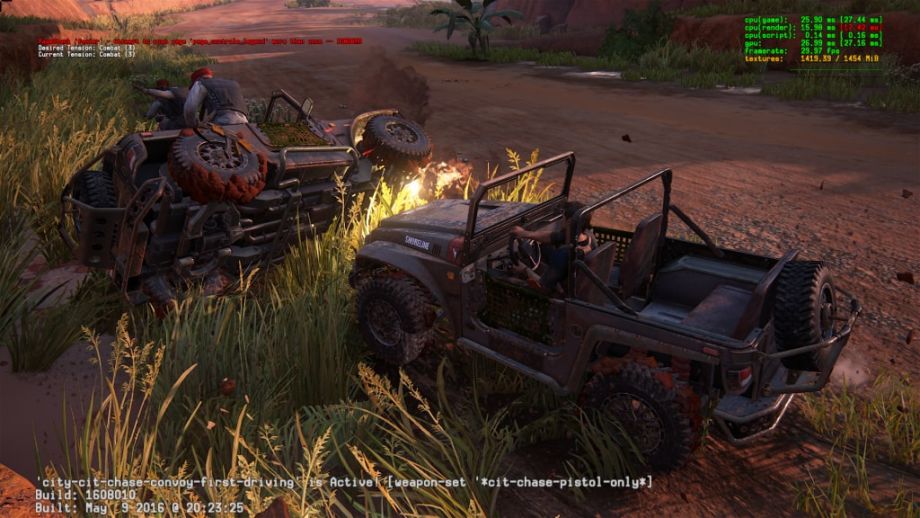 When playing death animations, there’s a chance that the dead vehicle can penetrate walls. A sphere cast is used, from the vehicle’s ideal position along the rail if it weren’t dead, to where the vehicle’s body actually is. If a contact is generated from the sphere cast, the vehicle is shifted in the direction of the contact normal by a fraction of penetration amount, so the de-penetration happens gradually across multiple frames, avoiding positional pops. 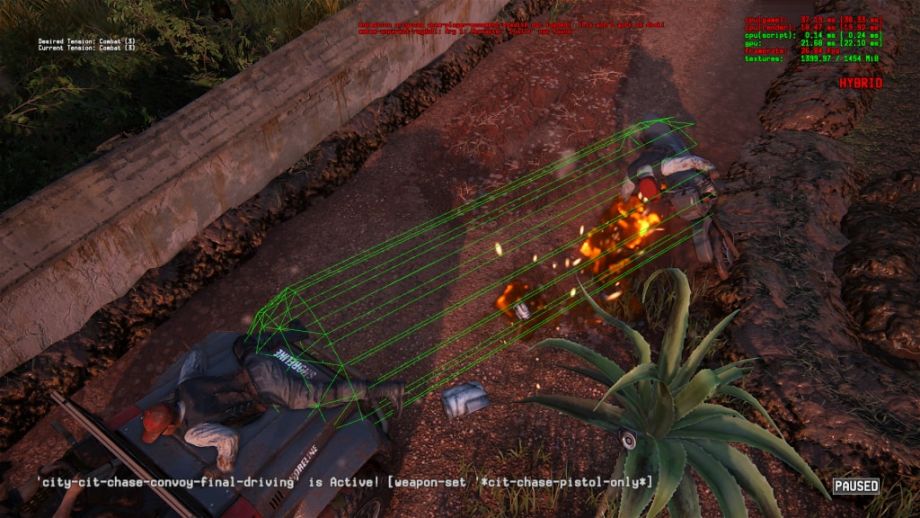 We made a special type of vehicle death, called vehicle death hint. They are context-sensitive death animations that interact with environments. Animators and designers place these hints along the spline rail, and specify entry windows on the splines. If a vehicle is killed within an entry window, it starts playing the corresponding special death animation. This feature started off as a tool to implement the specific epic jeep kill in the 2015 E3 demo.

We wanted to eliminate geometry clipping the camera when the camera gets too close to environmental objects, mostly foliage. So we decided to fade out pixels in pixel shaders based on how close the pixels are to the camera. Using transparency was not an option, because transparency is not cheap, and there’s just too much foliage. Instead, we went with dithering, combining a pixel’s distance from the camera and a patterned Bayer matrix, some portion of the pixels are fully discarded, creating an illusion of transparency. 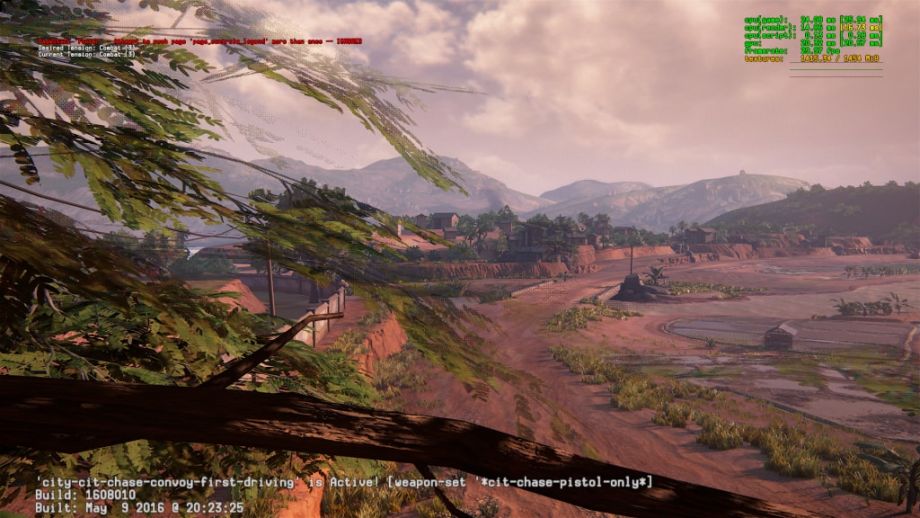 Our original Bayer matrix was an 8×8 matrix shown on this Wikipedia page. I thought it was too small and resulted in banding artifacts. I wanted to use a 16×16 Bayer matrix, but it was nowhere to be found on the internet. So I tried to reverse engineer the pattern of the 8×8 Bayer matrix and noticed a recursive pattern. I would have been able to just use pure inspection to write out a 16×16 matrix by hand, but I wanted to have more fun and wrote a tool that can generate Bayer matrices sized any powers of 2.

After switching to the 16×16 Bayer matrix, there was a noticeable improvement on banding artifacts.

This is a really minor contribution, but I’d still like to mention it. A couple weeks before the 2015 E3 demo, I pointed out that the tower explosion was seen and heard simultaneously and that didn’t make sense. Nate and Sully are very far away from the tower, they should have seen and explosion first and then heard it shortly after. The art team added a slight delay to the explosion sound into the final demo.

The article was originally published here.