To understand the logic behind God of War's level design, Sukhraj Johal recreated and analyzed the first level of the game and shared his thoughts. The case study was initially posted on Gamasutra and can be found here. It is now reposted on 80 Level with the author's permission. 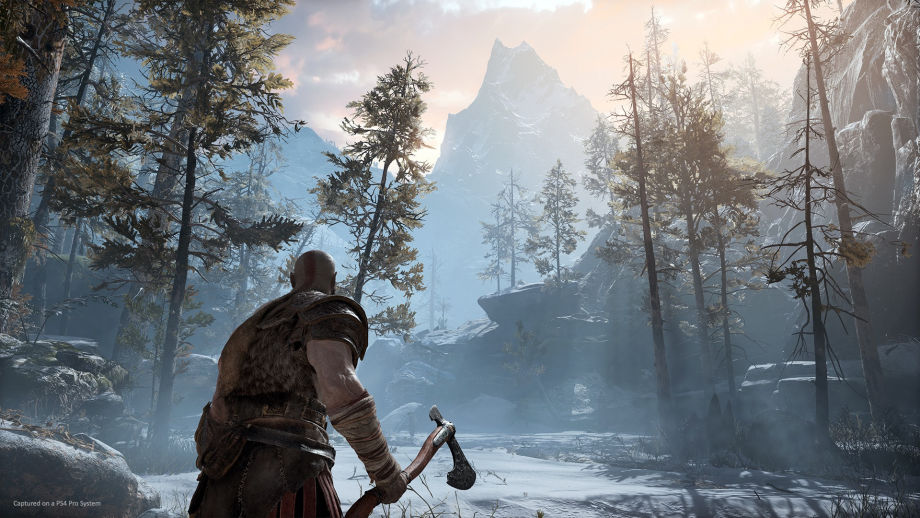 During my initial playthrough of God of War, I was intrigued by the rich Nordic world that the designers had created. I was particularly captivated by the first level and found it to be a great introduction to the game. However, I was unsure why exactly it was good.

In his blog, Michael Barclay describes how he learns more about a level by recreating it and seeing how it works to support the gameplay. In an effort to understand the depth of the first level, I decided to take on this endeavor myself. By dissecting the level and reconstructing it into its simplest forms, I was able to understand the care and design intentions set forth by the level designers at Santa Monica.

My initial step was to gain a deep familiarity with the level; I spent time analyzing the layout, flow, and pacing. When reconstructing the level, I didn’t know what Kratos’ character metrics were so I defined his height at 2m.

My workflow consisted of jumping back and forth between Maya and Unity. In Maya, I laid out the geometry and created a rough blockout. To make the level playable, I imported the blockout into Unity, where I also set up the collision geometry and created a custom character controller that resembles Kratos’ movement set. Multiple playtests were super important to gauge the level metrics, flow, spacing of elements.

For this study, I focused on mocking up and analyzing the first half of the level. 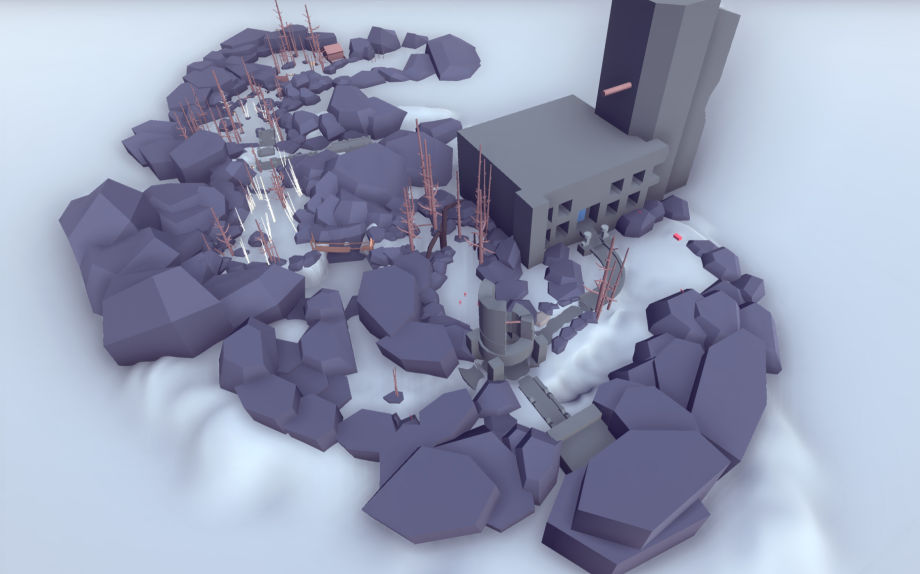 My Key Learnings and Discoveries

I found that the introductory level did a fantastic job at presenting the player with the game’s core pillars, including:

As I played through the level, I noticed that Birch trees with golden leaves were used as a repeating motif in the level. They were often used to contrast the dense wilderness and subtly guided me towards the golden path.

At many points in the level, leading lines and framing elements guide the player’s eyes to points of interest. These can be hidden paths that lead players to rewards such as treasure chests.

After Kratos cremates his wife, he and Atreus go on a deer hunting adventure. From a level design perspective, as they leave their home the path into the wilderness is fairly linear up to a certain point.

I believe this design was deliberate because a large focus of this level was on understanding the character dynamics between Atreus and Kratos, as well as showcasing small cinematic cutscenes involving the deer hunt.

After a while, the level opens up, allowing for the exploration elements of the game to take over once the father/son bond has been established. Players now have an opportunity to backtrack, collect hidden treasure, etc. 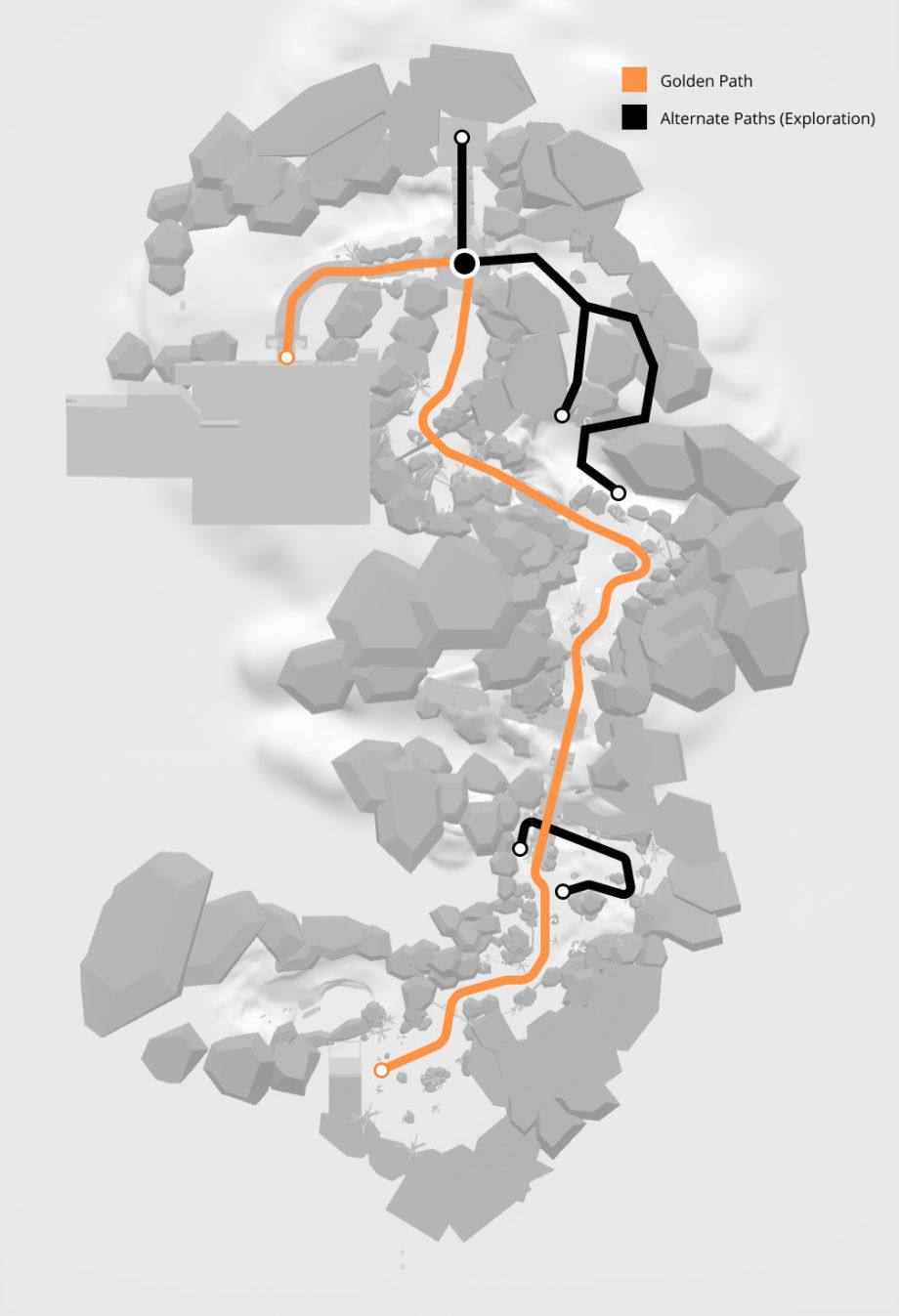 The first hostile encounter the player experiences in this level is the Draugr ambush. However, the designers made the players anticipate an attack by scattering narrative hints throughout the level moments before the encounter. For instance, the player sees dead bodies and charred wood placed in the environment, indicating that a fight had ensued earlier. A large burnt tree that is split in half also alludes to the appearance of the Fire Troll that players will encounter later in the level.

The arena where you first encounter the Draugrs is open and circular, giving players room to maneuver around the enemies and understand their behavior.

As a designer, I found the tutorialization of Kratos’ core combat and traversal mechanics to be very interesting. For the first third of the mission, the players are in no danger. They are presented with safe zones in the form of skill gates that teach them basic movements such as jumping over gaps and vaulting. These areas reinforce what Kratos can do as a character, and show players how to solve traversal problems that halt their progression (such as a fallen log).

This level also reinforces the idea of using visual cues to indicate the affordance of a prop in the environment. For example, fallen logs with exposed wood show the players that they have been trodden on before and therefore are traversable.

In addition, exposed wooden panels can be seen with cracks on them, providing the affordance that the structure is weak and breakable.

Overall, I found this case study to be a very informative learning experience. When you first play a game, you’re in the moment and tend to miss the important design decisions underneath it all that have helped to cultivate the game’s experience. Once you peel back the layers of the game, the beauty of its design really shines through.