Benjamin Wahl and Christoph Horinek discussed the way they were working on the original indie title Hushed Escape.

Benjamin Wahl and Christoph Horinek discussed the way they were working on the original indie title Hushed Escape.

My name is Benjamin Wahl and I do nearly everything as my alias “skodone”, which originates from being my name as a graffiti writer for more than 15 years now. My colleague Christoph Horinek is the coding genius of our duo and we are both from Austria. Christoph lives in Vienna and I live in Linz.

I’ve been a passionate gamer and artist my whole life and started doing 3D stuff about four years ago and when I attended a gamedev convention as a volunteer in 2016 (CEGC), I finally decided to make some games.

At the CEGC I attended my first gamejam and it became a new passion. A gamejam was also where I first met Christoph and we worked together for the first time.

My name is Christoph Horinek and I’m from Austria. I didn’t work on any nameable projects yet, but I’m attracted to game development since school. I made a snake clone during early programming classes, which run in a console and used only ASCII characters. For the final year project we made a classical text-based browser game named “Little Italy”. This was back in 2008/09, when such games were still very common – and it was a lot more fun than doing just an ordinary administration software or so.
I even managed to do a game themed honorable degree project during my BSc in Computing. Unfortunately I don’t have a position in the gaming industry, so I’m employed in the IT sector.
Since I still want to be active in the scene I’m working on little prototypes to improve myself and attending game jams. On the Global Game Jam 2017 “Hushed Escape” has been created.

My part was to get the game running.

More precisely: Get the character running (and sneaking) via microphone input.

This was the main feature and it took some time, also because of the connected problems and tasks.
For example: The technical side of getting and interpreting the audio input. How to map the input to a character movement, so it feels and looks good?

In addition I had to implement all the basic features like the audio waves the character causes, the glowing aura of the guards showing the awareness, animations, winning/losing the game, etc. during the short time of a game jam.

Sometimes it was a little bit stressful, but it turned out well and I’m very happy with the result.

At GlobalGameJam2017 in Vienna I met Christoph again and I had an idea for a voice controlled Game inspired by the jam-theme “waves”. Christoph liked it and also another artist, Luna Riedler joined us. Luna sadly left the team after the gamejam.

My main idea was the weird fact that in single player games one sits in front of a screen playing silently for hours. The player does not talk, but the character he or she controls will embody all the actions of the player. Like the player becomes the brain of a digital puppet, telling the puppet where to walk, what to do and what to say.

I wanted to make a game in which one has to talk to the screen to progress and further more I wanted the player to be talking soft and silent to the screen. Eventually players would emotionally feel the stress the in game character Mira would feel while sneaking past the guards. The player has to talk to Mira to progress but has to be quiet enough not to alert those guards.

Implement a Physical Musical Instrument as an Input Device

As for a gamejam game we really wanted to go for a simple solution and mechanics that would at the same time offer a lot of freedom. After some research on pitch detection we went straight with volume detection from an attached microphone input as our core mechanics.

This decision is a bit a double sided, since it allows the player to finish the game by just subtly scratching the microphone repeatedly. This is not really great fun. 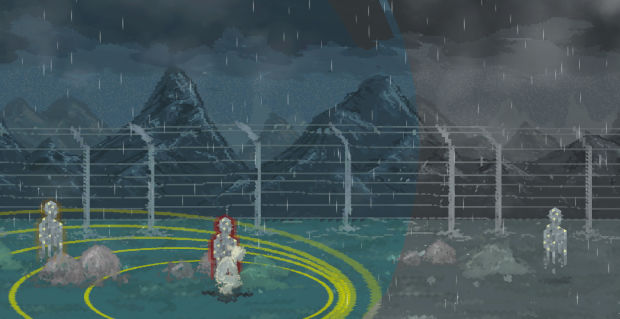 On the other hand it allows us to make any available sound a trigger for Mira to walk. I showcased this on a tweet, where I tried to play Hushed Escape via Antonin Dvorak’s New world symphony. It would also be possible to hold the game up to a busy street and see how Mira would react to city noise.

The main intention though is to build a relationship between player and character through the need to whisper to Mira to sneak past the guards.

I had heard quite a lot about Hexels already and I actually thought it is a 3D app from Marmoset that kinda works like an isometric voxel paint app, since I knew Marmoset only for doing 3D. Christoph actually told me that he had bought it in a Humble Bundle and liked it very much for creating 2D art with a unique look. 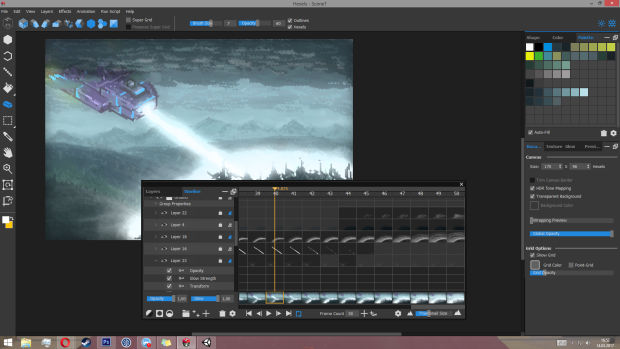 So we decided to go for it since I wanted to create simple pixel art that can be created fast and efficiently. The built in animation solution was yet another argument for using Hexels.

When I had downloaded and installed it I figured very fast, that my Photoshop workflow can be translated to Hexels very intuitively and the look of the Hexels is a nice change from good old pixelart adding yet another thing to the game. 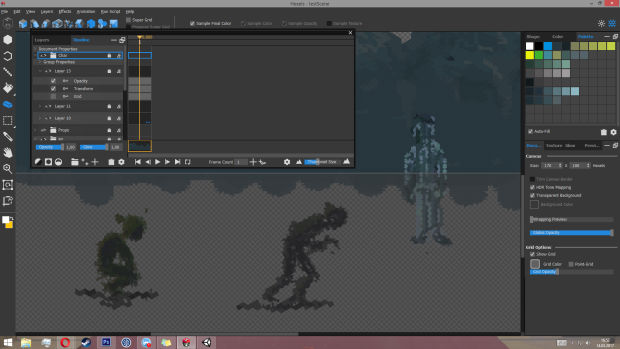 I actually don’t know why Hexels is a bit less known. It is a very solid tool for a really reasonable price. When I realized I can do Hexels, pixelart and animation in one stable piece of software, I was kinda amazed.

To me Hexels provided all the things I needed to do stylized and fast gameart. The low resolution, just as in pixelart, limits the artist in a very positive way. The palette tool is very powerful for easy creation of nice color schemes and the fact that Hexels is some kind of vector based and every drawing can be exported in the correct resolution without worrying about quality loss seemed perfect for a gamejam. 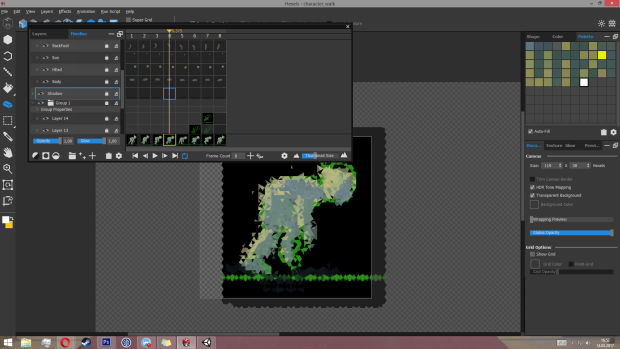 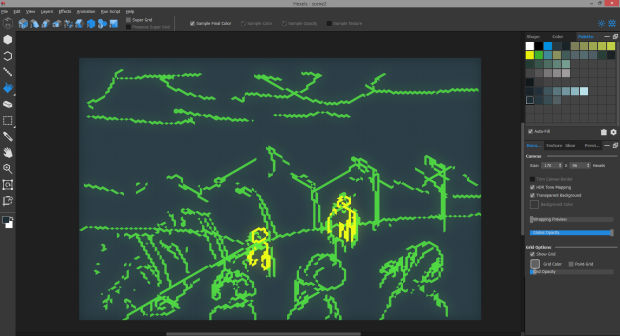 As mentioned before, the export in Hexels is fast and convenient. The resolution is entered in the export window and the art is exported nearly lossless with transparency in png or even as layered psds.
For animations Hexels automatically creates spritesheets which came in super handy for working in Unity. So for the creation of art I developed a fast and efficient pipeline within the first few assets. My knowledge of Unity also allowed me to prepare all the assets in the game to work with Christopher’s scripts and code. 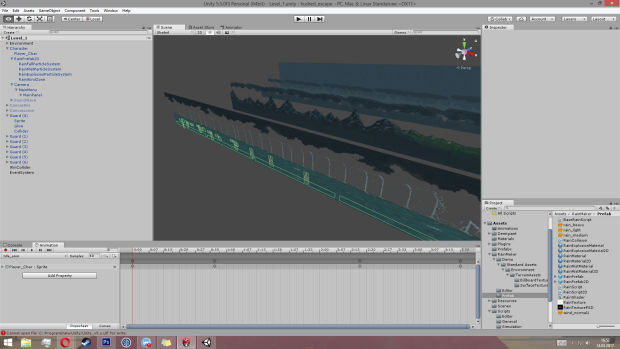 The biggest challenge in Unity was definitely to smooth the animations and to develop an algorithm to link the animation speed with the loudness of the input.

I recently had a big feedback round and showed the game to my study colleagues in Linz and they provided some feedback about the general message of the game which made me think over the Sci- Fi theme again and I will probably iterate about the visual style once more. Also we are still thinking about how to end the game properly and in a satisfactory manner. 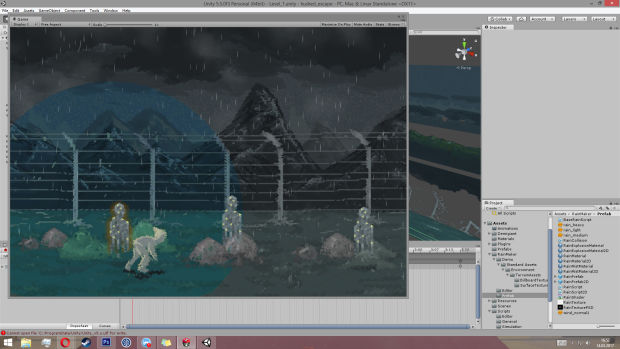 We definitely want to finish the game in the next months though and I would like it very much to release the game for mobile devices too, since I think the microphone input and agility of a phone or tablet would benefit the game, since it encourages more experimenting with surrounding sound sources.

I already pitched another game at a meetup about another game with pitch- and beat detection. Unfortunately the idea had its flaws and right now I want to concentrate on finishing Hushed Escape and on my master thesis which I will start in a couple of months on the topic of VR.