Elizaveta Loseva shared her thoughts and a few tips for character artists: creating a beautiful face, texturing, making characters for games, and more. 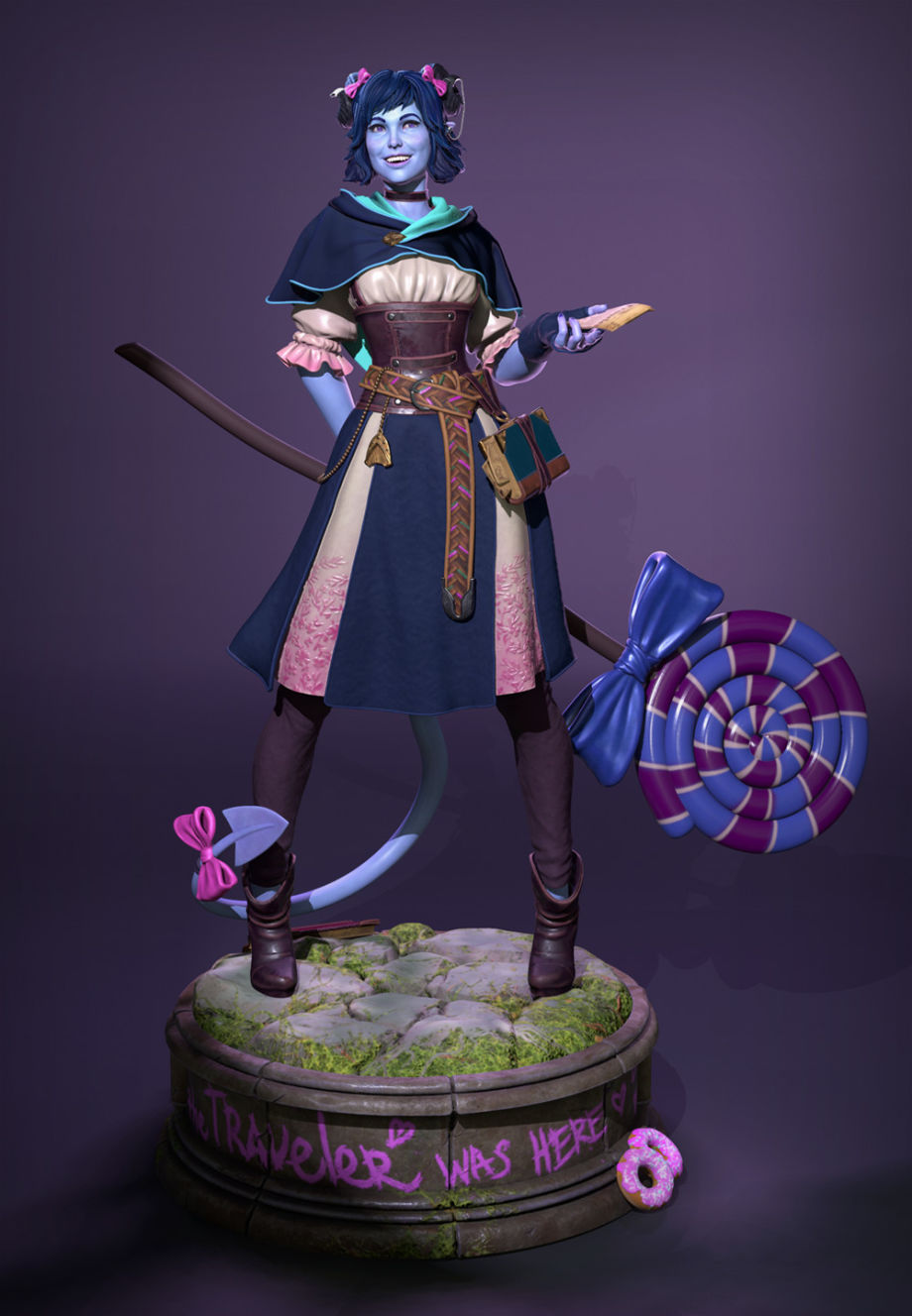 Hello! My name is Elizaveta Loseva and I’ve been a part of a character artist team at Plarium for a bit more than 3 years now. I’ve been working on projects like Sparta: War of Empires and Raid: Shadow Legends. In 2014, I took a short “Autodesk Maya’s interface and basics” course fully believing that I would be an animator. Right at the same time, I found The Last of Us. I’ve been playing video games since I was a child, but TLOU has completely changed my view on games as an art form, as well as my career’s trajectory. Since then I couldn’t see myself anywhere but the games industry, so I’ve started to learn ZBrush, Substance, proper topology flow, texturing for engines, etc. all by myself.

Working on the Characters in a Team

In a production environment, chances are that character design is already made for you by a concept art team and your work as a character artist is to execute the design in 3D. Sounds simple and boring, right? Only it’s not; especially if you can build a good communication channel with concept artists in your team. Don’t be afraid to ask or politely comment on something that doesn’t work in 3D in your experience. There were situations when it was simply impossible to recreate some designs or silhouettes in 3D. But if you collaborate with your concept artist on solving the design, you can make it better keeping the initial concept of the character created by the artist. And believe me, in that case, you will be contributing to the design of a character far more than you would initially think.

The other important thing is: don’t be afraid to ask questions about anything you don’t understand regarding concept art that was given to you. The rule of thumb is “you can’t model something properly if you don’t understand how it works”. Especially in a case of intricate clasps or helms on fantasy character or mechanical parts on sci-fi characters and robots. Ask the artist what the reference for that detail was and look at it closely. Or if this detail is a fruit of pure and wild imagination, ask how they think it would work (bend, open, etc.) and what parts it consists of. As soon as you understand how it works, it will be much easier to recreate the detail in 3D (it works for anatomy, too).

The key is to be respectful and kind to an artist and work with the concept art, not against it. 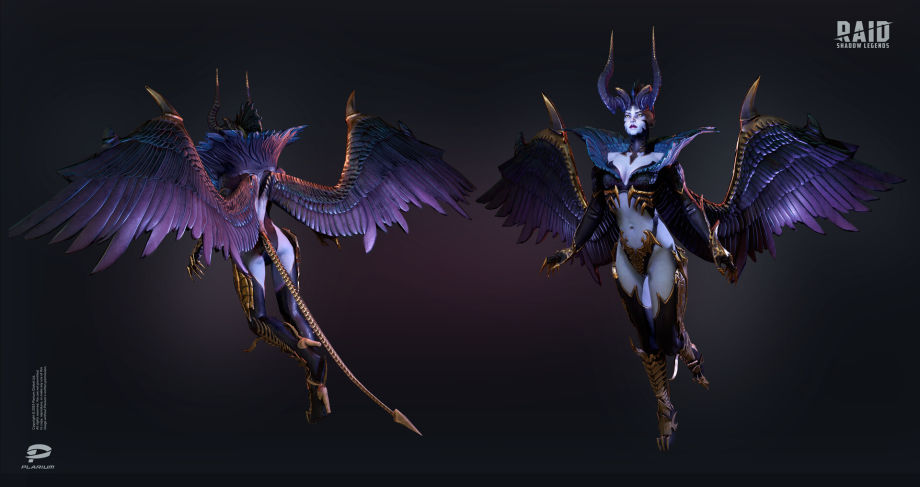 The personal projects are a completely different case. You are your own art director and concept artist, you decide what will or won’t work for your characters. I rarely do my own concepts for my personal work and more often I make fan art of the characters I love. For me, the key to finishing my personal projects is to be really excited about the character, that’s why fan art works perfectly well in my case.

I never use one concept art for my personal work. Instead, I gather an archive of all the art of that character I can find. After that, I decide on a core design (if a character has multiple designs) or a main piece of art that conveys the personality of a character. I use that piece of art as a center and build a reference board around it in PureRef. 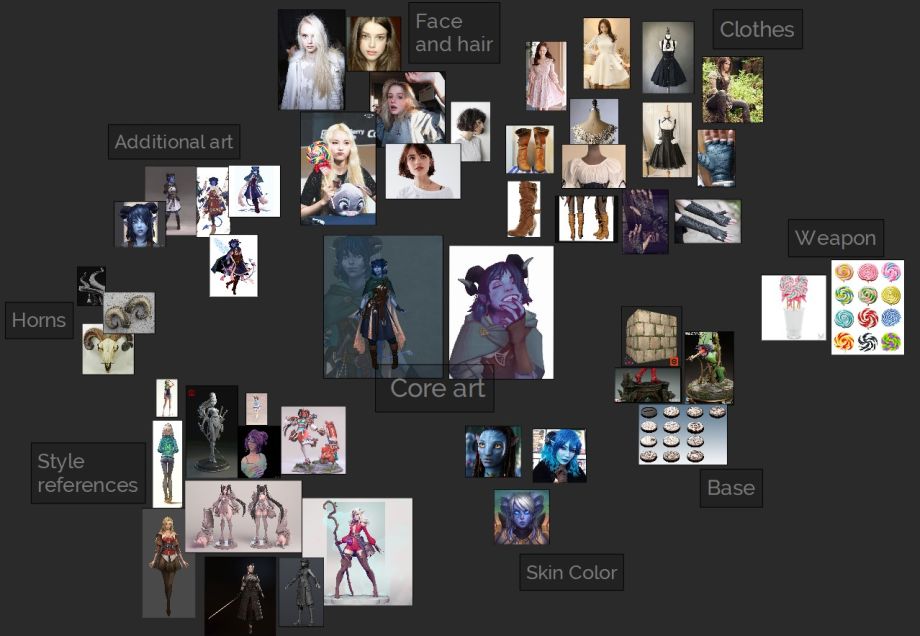 For example, in one of my latest personal projects – a statue of Jester, a character from the D&D show “Critical Role” – I’ve chosen two pieces of art as my core. The first one is the official art created by Ariana Orner (@ornerine on Twitter), which is how Jester is generally seen. The second one is an art created by Jose Vega, which, in my opinion, is conveying her playful attitude and personality perfectly. I’ve gathered a lot more references and art for this project, but these two pieces of art became the baseline for an idea of my 3D character.

After that, I worked on my own design in 3D based on all the art I’ve chosen. For that purpose, I usually create a very rough model, no polishing, no details, only shapes, and general silhouette. It will look ugly and it’s completely fine. Don’t be too precious with the details at that stage and don’t worry about wobbly surfaces. Nothing from that initial model will go to the final render. After I’m satisfied with the shapes, I start to make the “clean” version of it in ZBrush and Maya. I usually start in Maya for armor and hard surface parts and proceed with detailing in ZBrush. For soft forms, fabric, and body I usually use only ZBrush (although, I’ve started using Marvelous Designer quite heavily for fabrics in my personal projects recently). 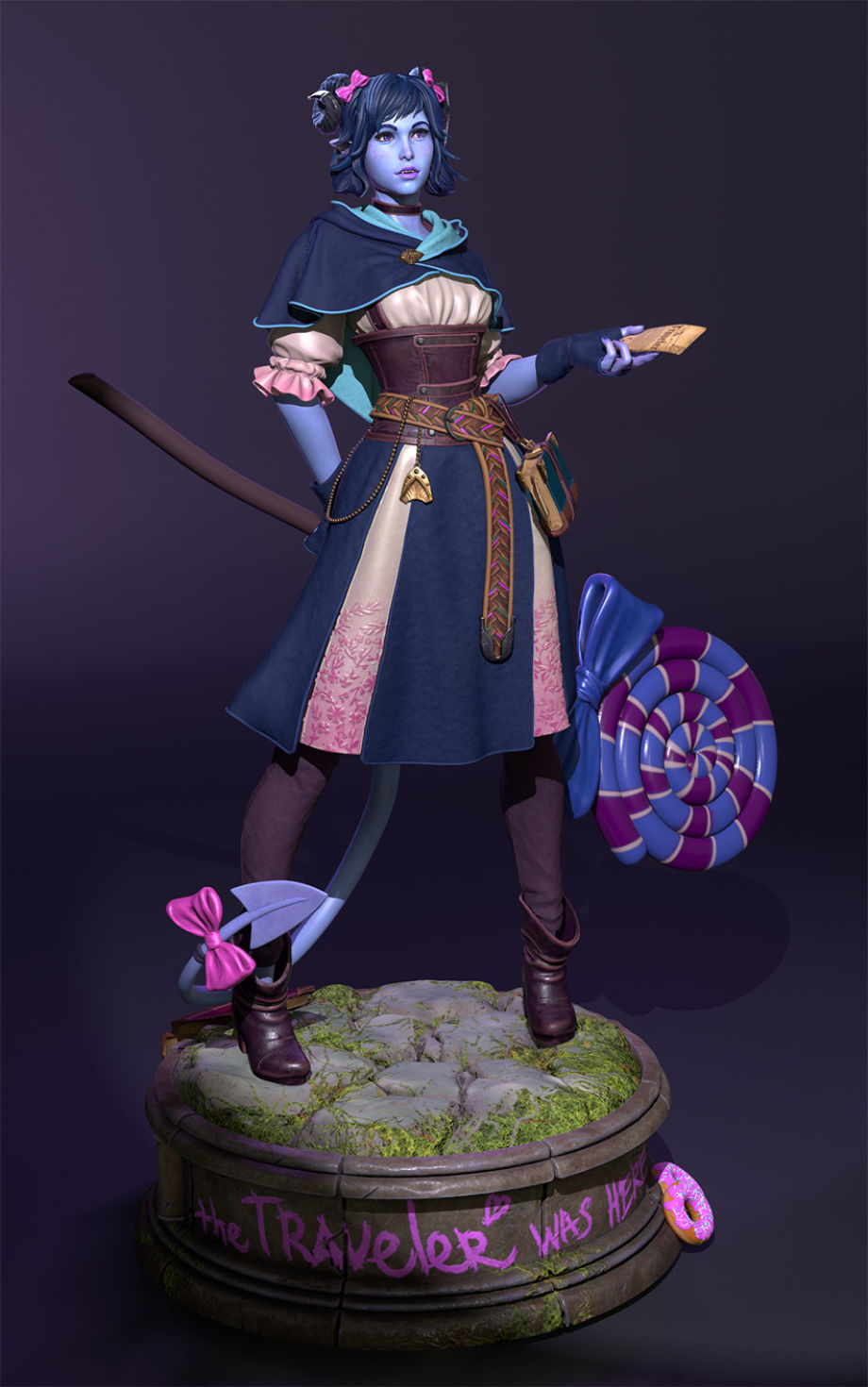 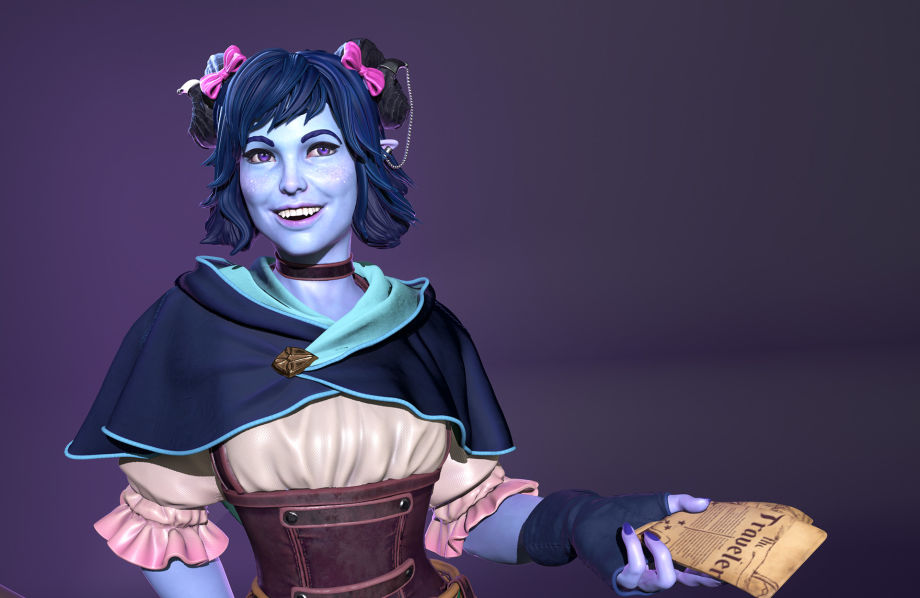 I’d love to tell you that I know the secret of creating beautiful faces, but in reality, the answer is to have a good understanding of anatomy. There is no way around it, even the most stylized faces are based on general anatomy principles. I’m still in the process of learning anatomy myself (and I don’t know if you could ever really finish learning it), so here are my tips on doing it: 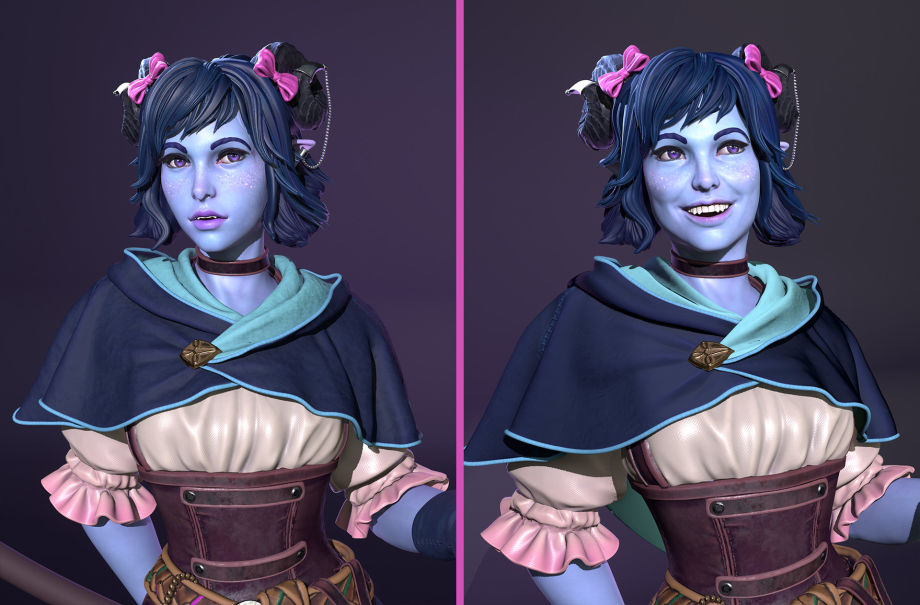 In the case of texturing, Substance Painter is my weapon of choice, it makes texturing an interesting iterative process open for experimenting due to the non-destructive nature of the program. For skin texturing I recommend Magdalena Dadela’s tutorial, it’s still one of the most useful resources for anyone who wants to learn how to create realistic skin texture.

For my models, I use a combination of her method and photo projection. I project the texture onto the model in ZBrush, save it as high poly and bake the color onto the low poly using the ID map in Substance Painter. After that, I use resulting texture as a base for the final skin texture and adding spots, veins, etc. in layers. Usually, in the end, the base texture is heavily altered.

Cloth and metal texturing are fairly straightforward. First of all, you should have a reference for the material you want to recreate and study it very closely. What color are shadows, does it have a color tint, fuzz, scratches, second layer of material which become visible when the surface is damaged? All these details are important for creating material that “feels” natural to the audience. And don’t try to create materials from scratch (I was guilty of this myself at the start). Substance Painter has a vast gallery of premade materials (inside the software and in Substance Source), use them as a base and modify them as you see fit. It will save you a ton of time you can spend on adding details to the material.

Practice and don’t be afraid to experiment with your textures, in time you’ll develop your own tricks to make materials look good. For example, I like to add a layer with tiled, heavily warped, and blurred Position map to my metals on a very low percentage (1-2%). It adds a slight color tint to the metal surface and makes it more interesting to look at. Or a very well known tip about adding gradients to large plain pieces of clothing like skirts and tabards which makes them more interesting visually. 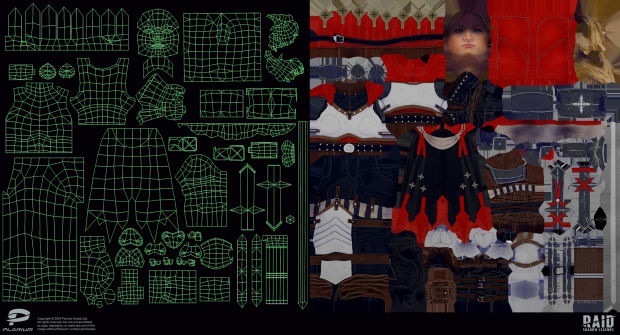 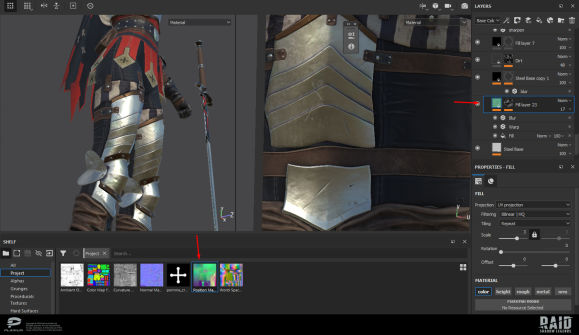 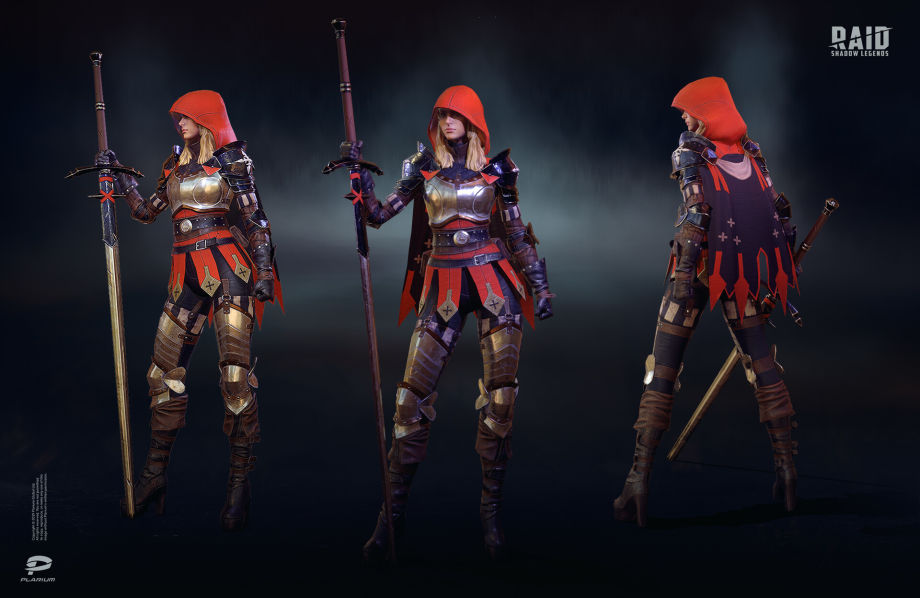 It’s hard to define general rules for in-game characters because it massively depends on projects you are working on. AAA and mobile projects are still far apart in requirements for character art and creating models for mobile platform projects has its own unique set of challenges. It can teach you to work in strict constraints, like only one 1k (or even 512×512) texture map instead of several maps of bigger resolution, or working without alpha maps, or working in polycount less than 10k or even 5k of triangles. Clean topology is much more important in characters with polycount that low than in characters with dozens or even hundreds of thousands of polygons. Good UVs are essential for your character to look good in the game engine. Rule of thumb is everything that can be straightened on the UV map should be straightened. Sometimes it includes something not as obvious as belts and weapon, but also hands, fingers, and legs, too. This part is useful for projects of every scale and for every platform.

My advice is to research the games you like, not only their artistic style but technical info about characters too. Finding that information is not that easy but sometimes during art dumps on ArtStation, artists are sharing some tech info, UV maps or a screenshot of a wireframe. In general, ArtStation is full of good examples of UV maps, especially since the Challenges appeared and participants are showing their maps and wireframe in final submissions. Forums like Polycount is a good source for that info, too.

Keyleth
by ohpleasestopit
on Sketchfab

But all the technical stuff aside, making characters for mobile platforms is also a great opportunity to learn more about color accents and silhouettes, which can help your characters stand out on a smaller screen. My favorite and one of the most useful articles about that to this day is the Dota 2 Workshop Character Art Guide. It was written with hand-painted stylized texturing in mind but the core principles are the same for every character which will be seen from a big distance, and/or in a top-down view, and/or on a small screen: top-down gradients, color and tone contrasts, interesting silhouette.

The two biggest mistakes I’ve seen (and made) in characters like these are: creating fully realistic textures and over detailing small characters. Both of these mistakes are resulting in characters looking very good up close in Substance Painter or ZBrush and looking like an incomprehensible mess in a game engine or on a small screen. When we think about PBR texturing we usually imagine realistic looking materials, dirt and slightly muted colors, but it’s not good for something you will be looking at from far away. Everything in textures like that is a bit over the top, a bit more contrast in the fabrics and dirt, a bit more shine on the armor.

Always check your characters in the game engine or at least with the same camera position in the modeling or texturing software. That way you will be controlling silhouette and colors at every stage of the process. But even if you think you are controlling everything mistakes can happen and they will happen. Every beginner artist makes them and it’s okay. The only advice I can give is practice, listen and embrace the critique of people who work with you (or who work in the industry you want to be a part of someday). Then practice some more.