Chris Sims did a breakdown of his UE4 environment The Lone Tower and talked about the way he scaled the scene, utilized Megascans, and established lighting.

Hello, everyone! My name is Chris Sims. I am a self-taught environment artist and level designer hoping to break out into the industry. I was introduced to the concept of level design years ago after I discovered the Half-Life 2 level editor. I remember being blown away by the fact that I was using the very same tools the level designers were using to develop Half-Life 2’s maps. From then on, I continued to casually create levels for various Source engine games. For a long time, I knew I wanted to do something in the video game industry, but I didn’t know exactly what. One day I was reading an article about the process of creating a modern AAA level, and the term “Environment Artist” was used. That’s when it clicked and I realized what career path I wanted to take. Soon after that, I made the switch to Unreal where I began learning the modern AAA environment art pipeline.

I’ve always had an interest in urban exploration. It’s a constant source of inspiration for me. Abandoned environments hold so much character and history to them. What did the environment look like before it was abandoned? If the walls could talk what stories would they tell? One of my favorite sources of urban exploration is a channel called The Proper People on Youtube. In one particular video, they explored a power plant that was abandoned during construction. There is this one breathtaking shot of the cooling tower that I used as a reference for the scene. I began taking tons of reference screenshots of the video and pasted them into PureRef. PureRef is a simple little program that allows you to easily manage multiple reference pictures. 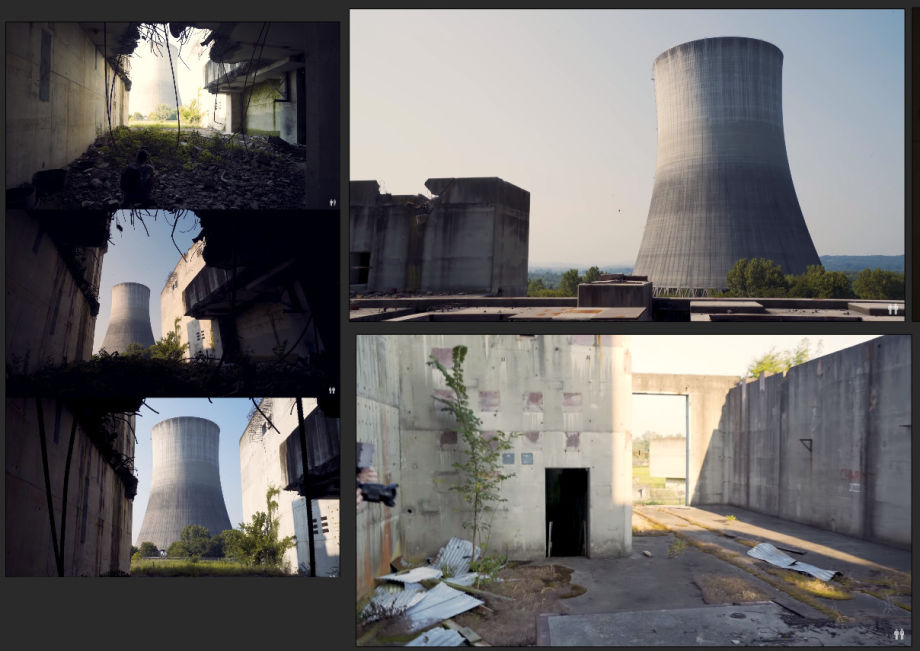 The goal of this project was to put my composition and level design skills to the test. I wanted the scene to not only be interesting visually but also functional in the context of an exploration game such as The Last of Us. I imagined the player turning the corner and instantly seeing this massive structure looming over them. The shell of the buildings and broken ceiling creates a perfect frame around the tower. The tower serves as a landmark in the environment so the player always has a frame of reference to where they are in the level. It could also act as a point of interest for potential loot or important story developments.

With each new iteration of the blockout, I needed to ensure the frame was still left intact. This is where the delicate act of balancing level design and environment art comes into play. The more detail you add can potentially conflict with the original designer’s intentions.

The blockout was done in 3ds Max and I opted to go for a non-modular approach to the buildings. I usually build modular kits for my environments, but for the sake of time, I decided to just make unique meshes for the walls and used tiling textures.

Scale of the Scene

The scale of the scene is relatively small. Initially, I only wanted the shot from inside of the building, but later during development, I thought it would be really cool to have a vista overlooking the tower. I made a quick field of grass and a barbed wire fence to act as a boundary. The tower still dominates the view while everything around it creates a frame. I also added a newspaper clipping from the actual Three Mile Island accident to give a bit of backstory as to why the construction of the plant was halted.

Since this isn’t actually a playable level, I was able to “cheat” a bit by creating an illusion of a field and mountain range. The field is actually just a few clumps of grass and the mountain itself is a flat plane that I bent to add some depth. This is honestly some of my favorite aspects of game art in general. Creating illusions to trick the player into thinking the environment is larger than it truly is. It’s extremely fun trying to find ways to overcome a problem with the help of smoke and mirrors. 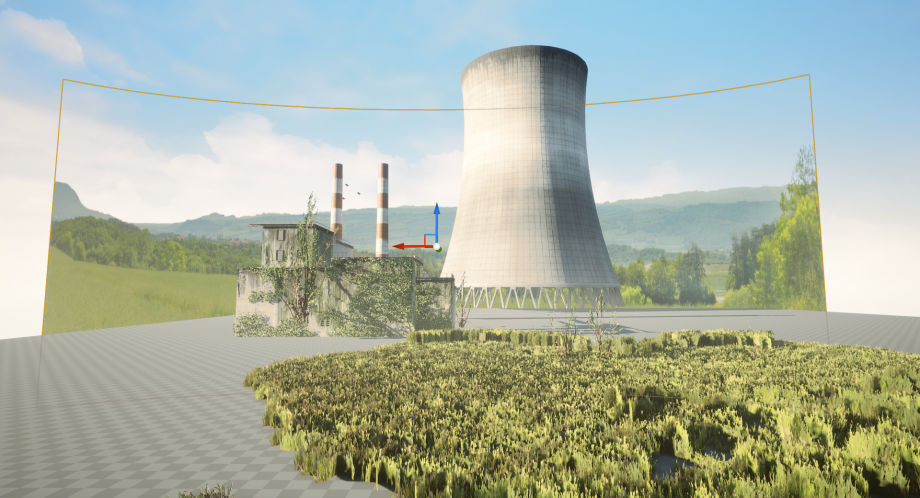 Because the scene is dense with foliage, I knew this was the perfect time to try out the Megascans library. I looked through the entire library for any possible materials or 3D assets I wanted to include. When I found something I liked, I just added it to my favorites so I could easily find them later. I then exported them into UE4 using the Quixel Bridge plugin to quickly bring them into the editor. 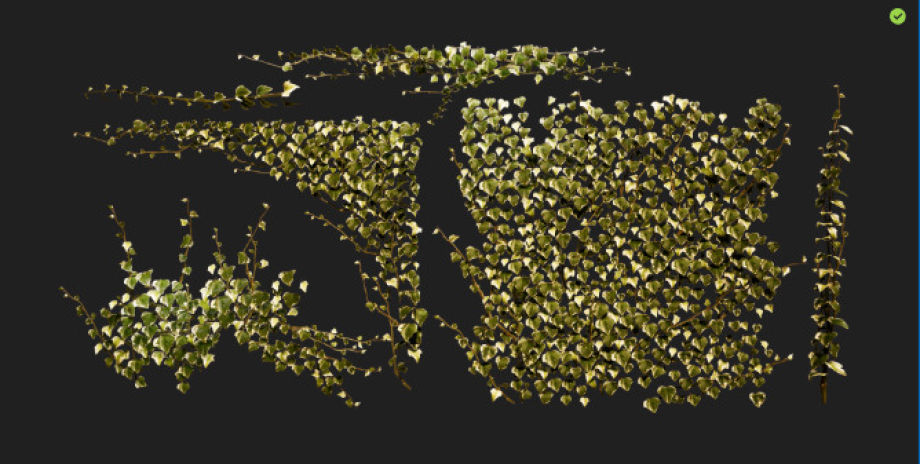 Some of my favorite assets were the 3D foliage models. Specifically the English Ivy set.  I wanted to make the environment feel overgrown without going overboard with details. If you start adding details randomly without thinking, the scene can quickly become a cluttered mess. When propping your environment think to yourself “Does this prop make sense here?” In the image below you can see the foliage in the background is lush and green, while the foliage in the foreground is dead and wilted. That is because the foliage that managed to grow further in the back of the building receives less sunlight than the foliage near the front. Small details like these help bring your scene to life. 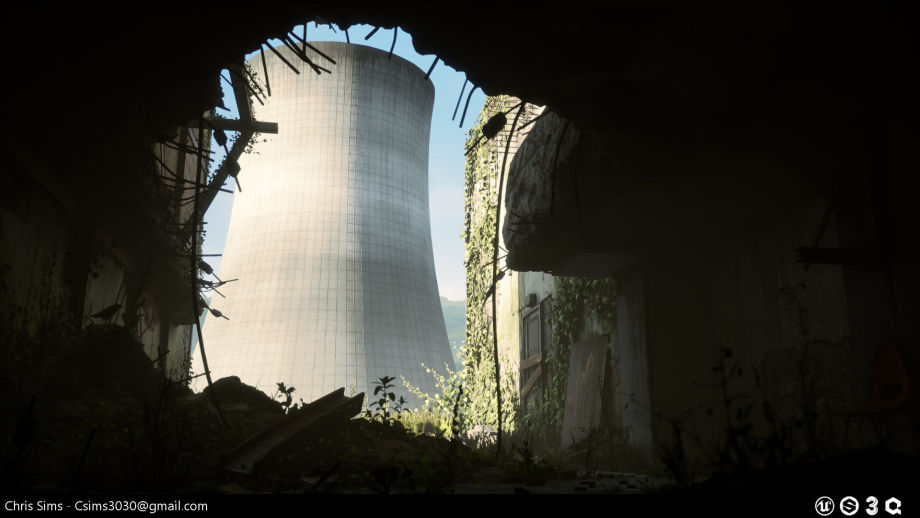 One of my concerns with using an asset library is it might restrict my artistic freedom. While you can argue Megascans out of the box aren’t as customizable as a material made inside Substance Designer, Quixel still provides you with ways to edit the assets to your liking. For example, If you don’t like the default variations of the English Ivy set, you can create your own variations using the texture maps provided when the asset is downloaded. Quixel Bridge also provides a master material with each asset type. These master materials are filled with a variety of parameters. I utilized these master materials in my scene to quickly edit the tiling and cropping of my materials. I am just scratching the surface with Megascans. The library is more versatile than I originally thought.

I want to quickly emphasize how important decals are. Decals are a quick way to add crazy amounts of detail with little effort. I used a mix of vertex painting and decals to break up the repetition of the tiling materials. I recommend “layering” decals to create interesting effects. For example, I layered a broken concrete decal on top of a mossy stain decal. The two decals together create a convincing illusion of depth.

Since a majority of the scene was textured using tiling materials, only a handful of the props needed unique textures. The most important one being the cooling tower itself. The tower was a unique challenge for me because I’ve never worked on a prop like it before. They have such an interesting texture to them that I struggled while trying to replicate it at first. 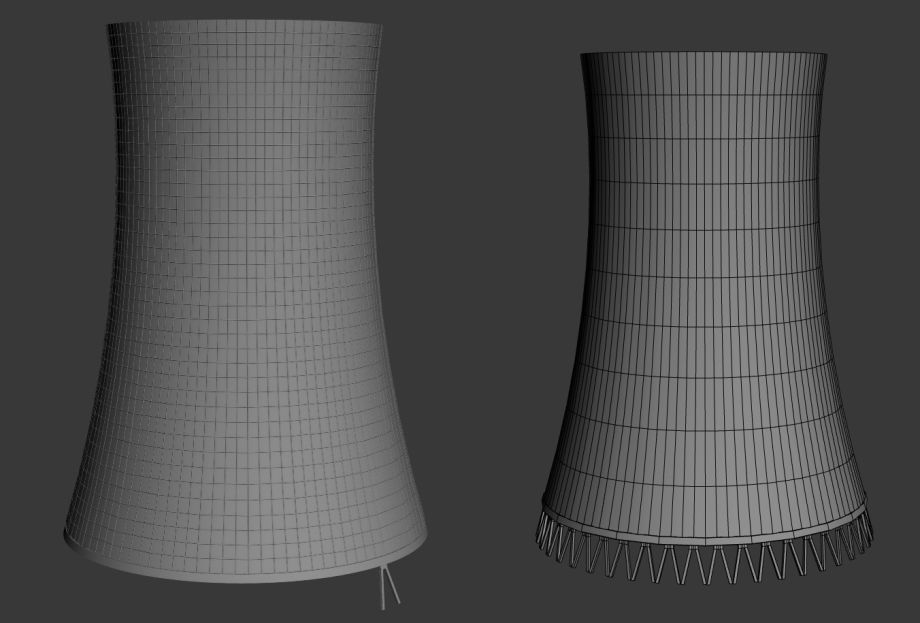 After a bit of experimentation, I realized I could bake the braces that run around the body of the tower straight onto the low poly mesh. On the left, you can see the high poly mesh with the braces extruded. (I disabled the wireframe so you can see what’s going on) That way I could utilize the normal and ambient occlusion maps in Substance Painter to generate dirt around the braces. The dirt generator really made the braces pop out from the mesh. By mirroring the bottom support I was able to save on UV space. Not only did I use Painter to texture the tower, but I also used it to create a little trim sheet for the various metal beams and rebar meshes. By coloring the high poly pieces of the trim sheet with different colors, I am able to use the ID Color picker inside Painter to select specific spots on the plane. This way I can still use smart materials on each piece of the trim despite the mesh being a flat plane.

The scene is mainly lit by a static directional light and skylight. Global illumination did a decent job of bouncing light to the back of the building, however, I did need to add a couple of dim fake lights to highlight some of the darker spots. 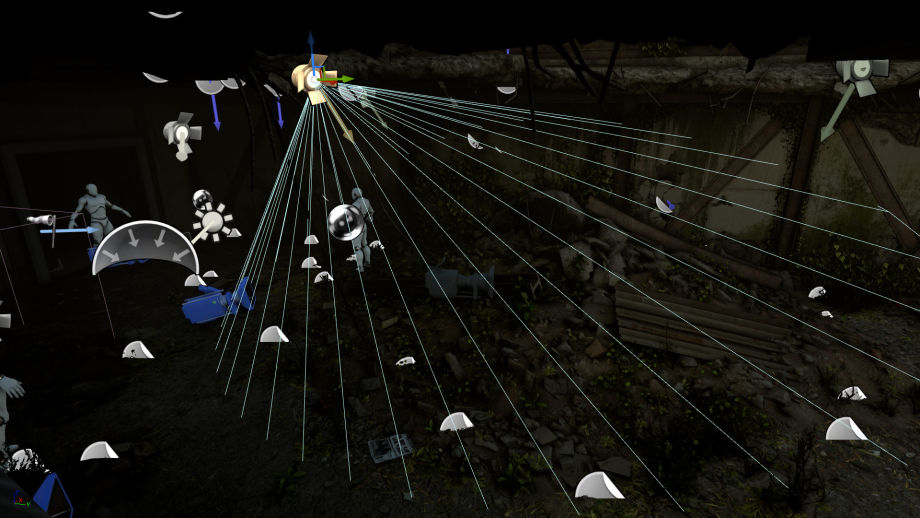 Post-processing was an important aspect of setting the right mood. Despite the crumbling surroundings, I wanted the scene to feel like a warm and peaceful summer afternoon. Without post-processing, the image is very dark and the colors are actually on the cooler side. I was able to brighten the scene a bit more by setting the min and max auto exposure to 0.1. I also played around with the color grading to achieve a warm tint to the image. There is a subtle amount of fog in the background to create a haze across the scene. Just add the sound of cicadas chirping and you have yourself a warm summer afternoon.

I learned many of these lighting techniques with the help of Tilmann Milde’s UE4 Lighting Academy on Youtube. You’ve probably seen this series linked before, and for good reason. Tilmann goes into great detail about lighting theory. It’s a fantastic resource for any lighting or environment artist.

Overall I am pleased with the way this scene turned out. I was able to quickly produce a AAA quality scene in just over a month with the help of Megascans and the Quixel Bridge plugin. This project truly proved to be a fun challenge of balancing between environment art and level design. The player's view of the tower was left intact by keeping a close eye on the composition with each iteration. That is why I can't stress enough how important the initial blockout stage is when setting up your environment. The blockout irons out any potential layout and composition problems early so you don't have to do it in the middle of an art pass. Moving around simple blocks is much easier than an environment that is already detailed.

Thanks for reading! I want to thank the Quixel discord for providing fantastic constructive criticism during development.

If you wish to contact me, you can find me at the links below: