Francisco Garcia-Obledo shared the way he and his colleagues improved the blood in Assassin’s Creed 3 Remastered.

Francisco Garcia-Obledo shared the way he and his colleagues improved the blood in Assassin’s Creed 3 Remastered.

The purpose of this post is to show how we improved the blood from AC3 with the latest tech changes we implemented in Anvil.  This is how the blood looks like in the final game.

Here is a comparison. In the original game, the blood was simulated with just one particle emitter with a generic texture (the same texture map was used to simulate dirt, snow bits, etc). The nice touch it had was the use of a threshold alpha animation which is a common technique nowadays and used in a wide range of effects. My approach here was to use the same technique but with a more realistic base texture plus adding more emitters and better dynamics (gravity, dampening, etc). I ended up having 4 emitters: thick drops, smaller drops, core, and spray. 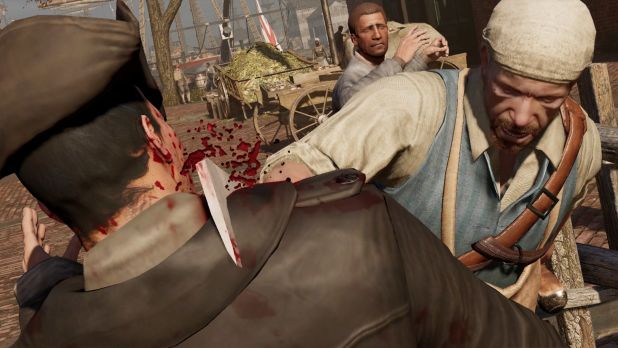 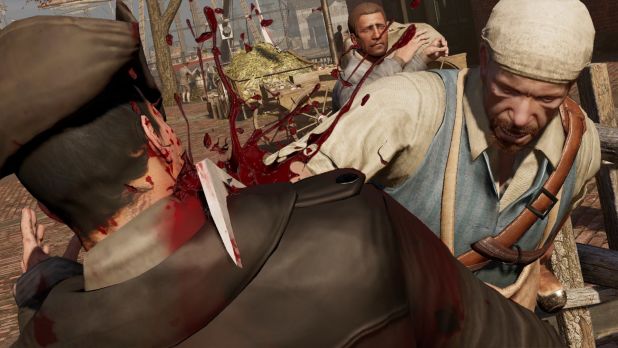 I’m going to explain how I created the core blood effect (the other ones are basically the same but changing the shape of the blood). The purpose of this breakdown is to show my workflow in which I mix both procedural and traditional techniques.

I added Blender into my pipeline when I was working at Gears 4 and we didn’t have any fluid simulation software and I’ve used it since then on other projects, from Red Dead Redemption 2 to Candy Crush.

The scene setup is very basic, it just consists of one geometry acting as fluid emitter and other being the collider. There is some animation on them to achieve (after many attempts) the look I was looking for. 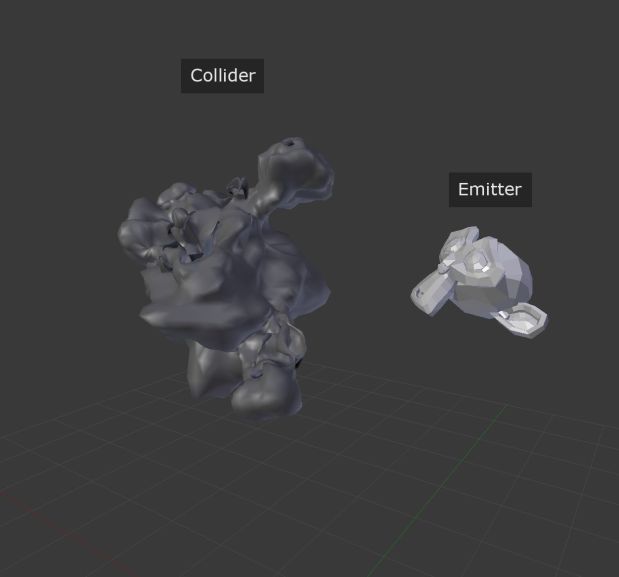 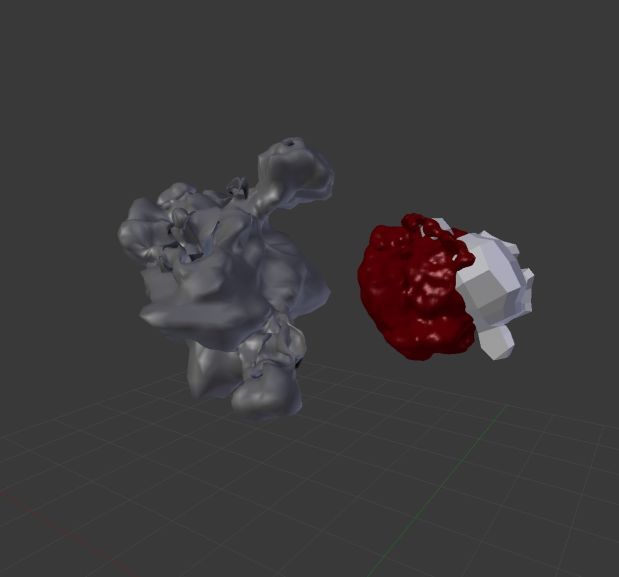 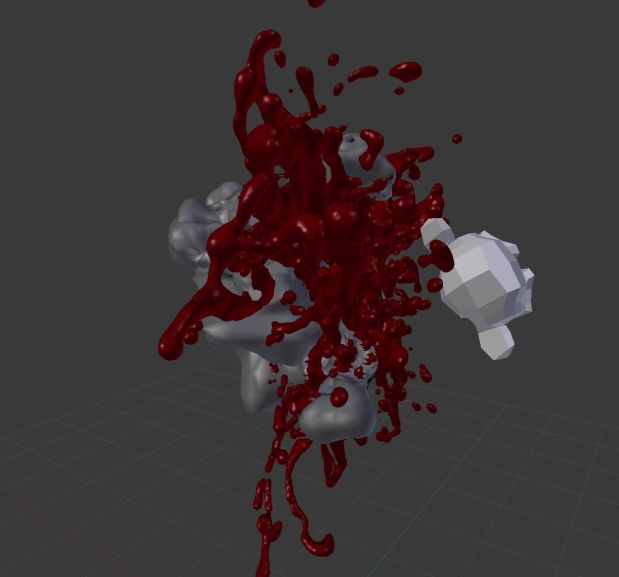 When we choose a frame we are happy with we are ready to isolate the fluid mesh and place a camera to take renders: 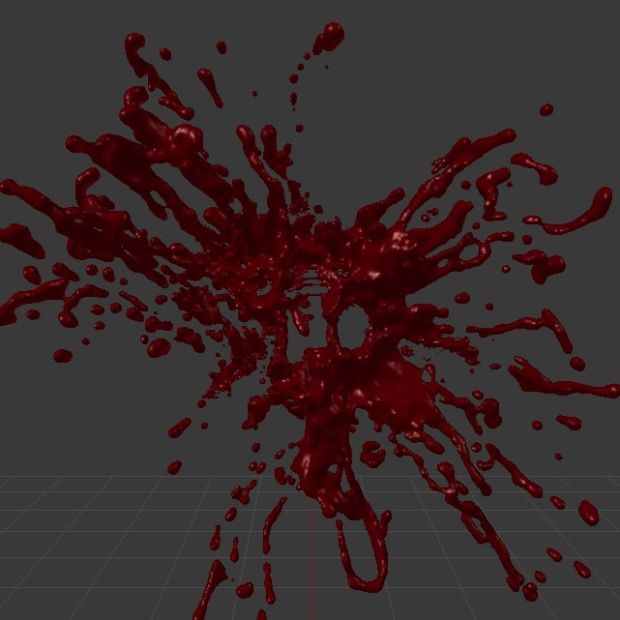 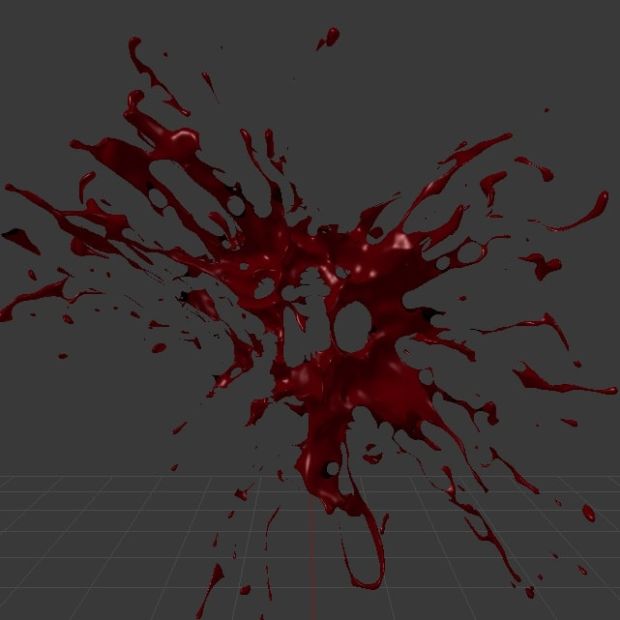 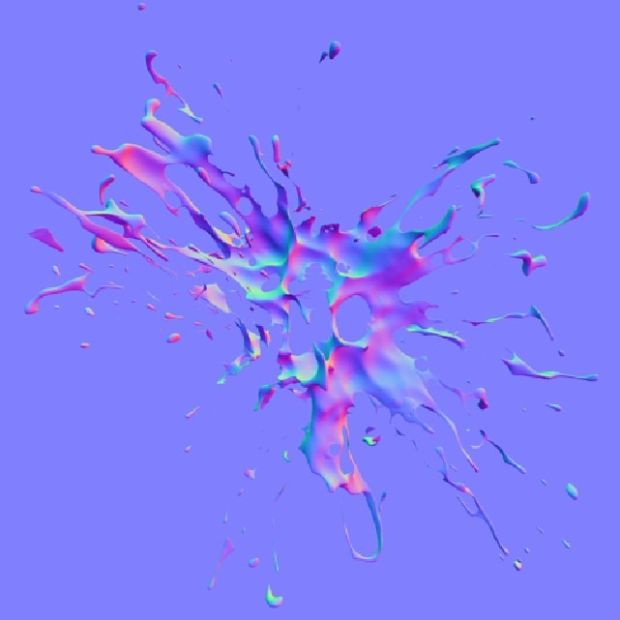 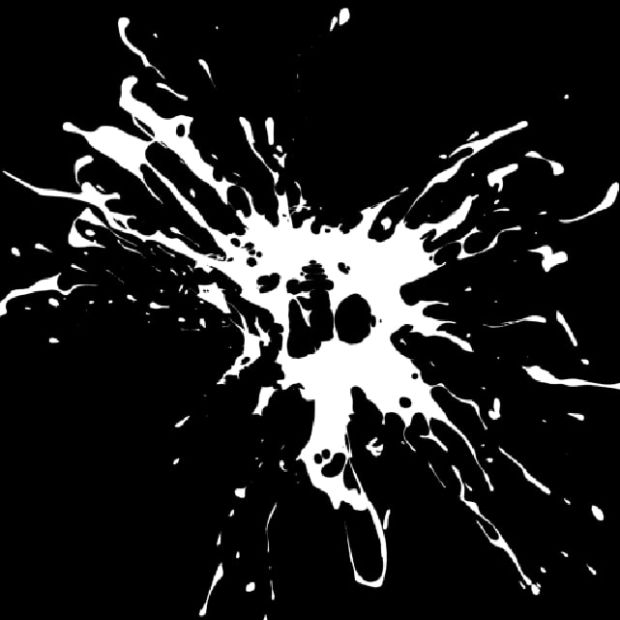 We can move to our engine, import the textures and create the shader we will use. 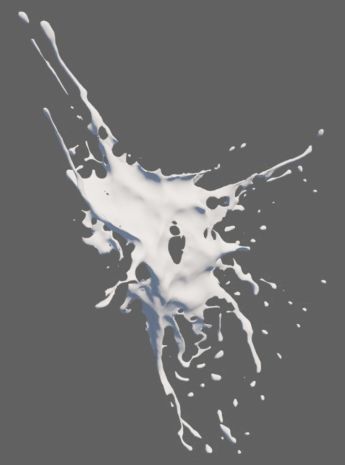 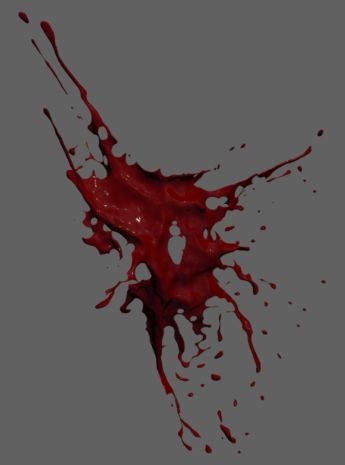 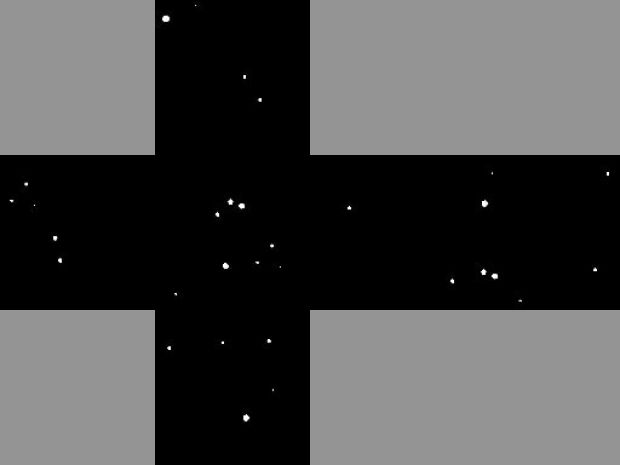 At this moment we have a basic blood sprite with which we can start to work on the dynamics of the effect. But, the disappearance of this blood splat will be a classic alpha fade out and, in my opinion, this is outdated now for things like liquids. Let’s move on and create the threshold map. For this, I incorporated into my pipeline Substance Designer. 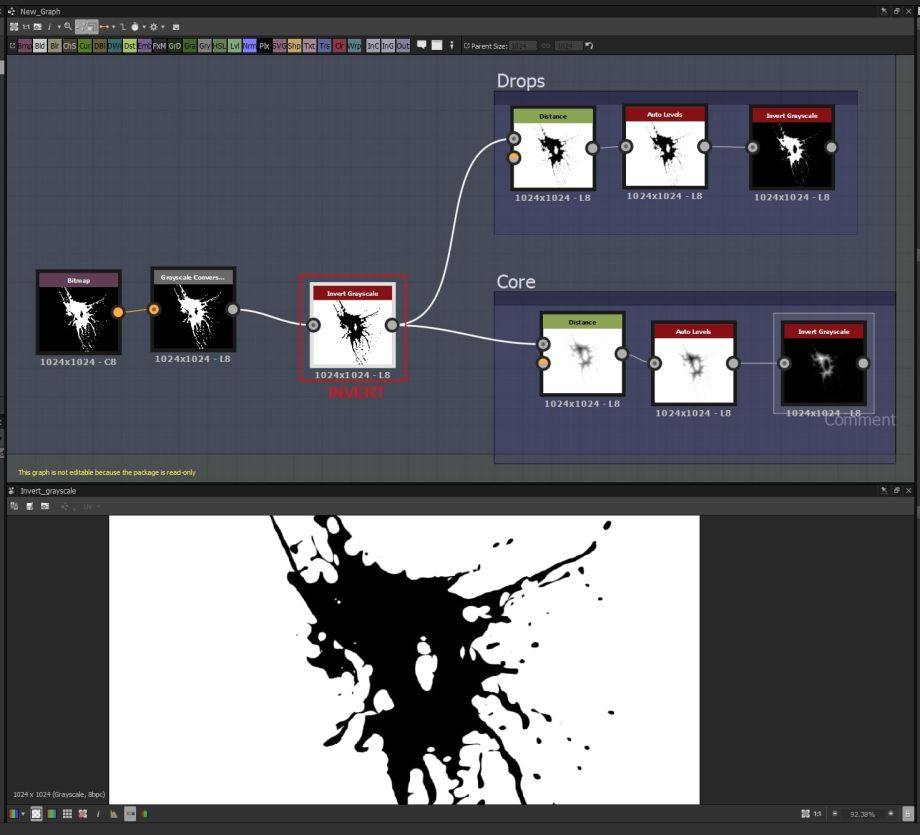 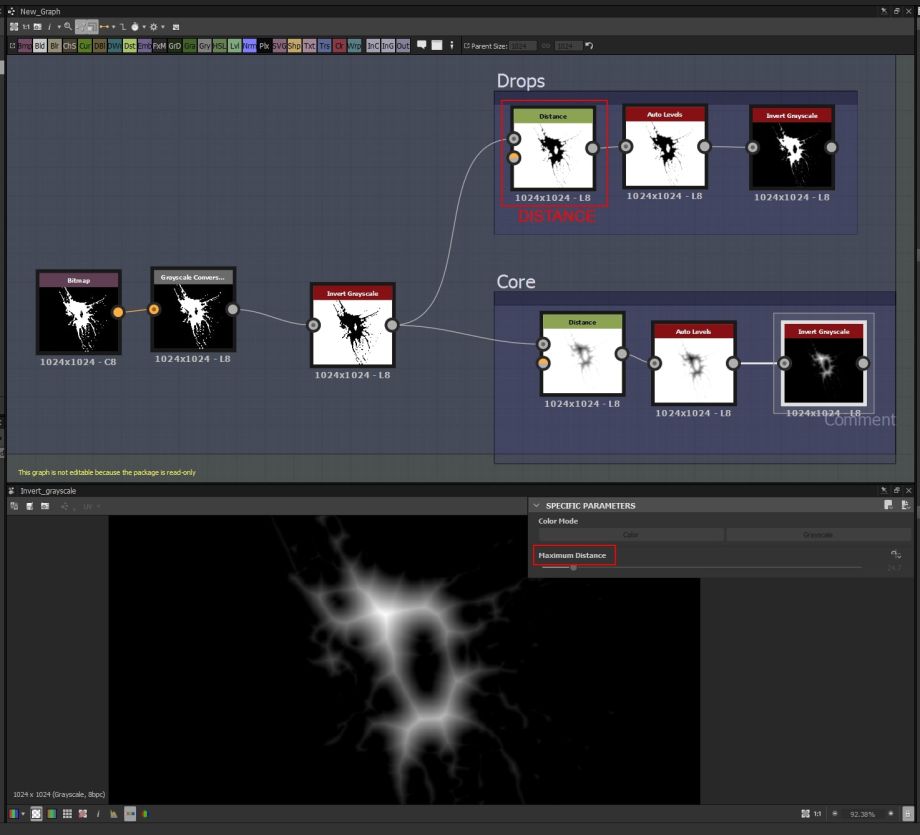 There is one thing here to pay attention to. This node works with absolute values so a value of, let’s say 20, works for the thicker parts but will create almost no gradient in thinner parts (such as the squirts). To solve that, I divided the image in 2, the center and the squirts (the maximum distance was set to a much lower value for these) 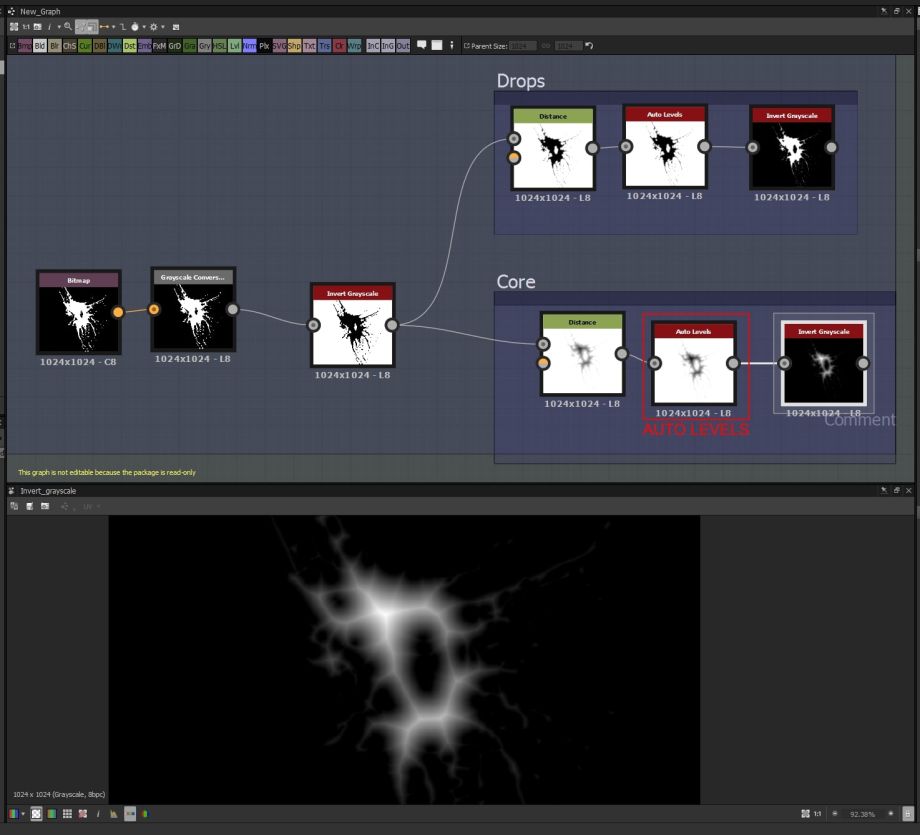 After some tweaks here and there, we will get our resultant threshold map. 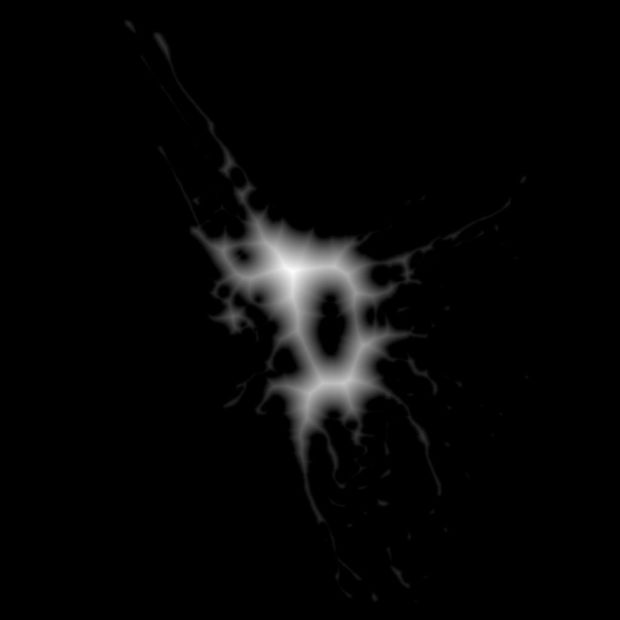 You can see that although the animation is smooth and will look ok like this, it looks unnatural. Especially, it creates some hard angles that you never see in liquids. To fix that you can modify the texture as if it was a standard texture, adding filters to it but being careful that you don’t break the shape of it and, more importantly, you keep the whole range of grays in the histogram. 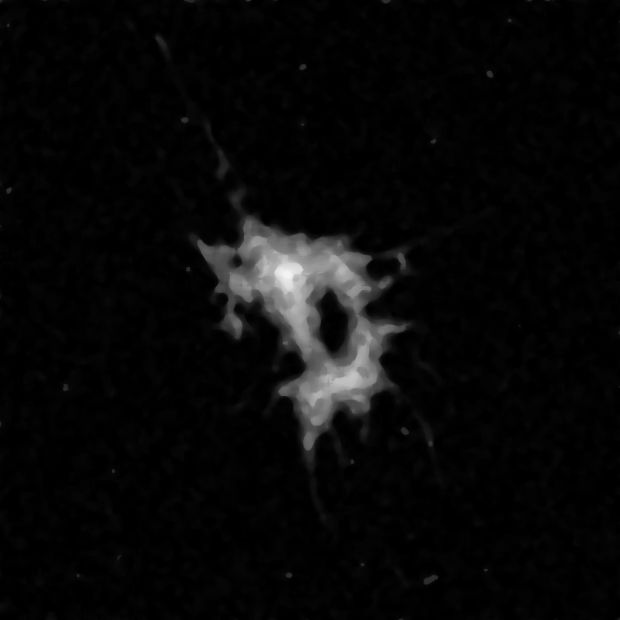 Taking the shader from where we left it we will add the alpha threshold animation (also called erosion). It depends on the engine we are using so here I’ll link some references to this topic. So, let’s add the threshold map we created into our shader, this is how it will look up to this point:

Looks cool but you can appreciate what made me create this whole pipeline for when the liquid is untouched the borders look nice with some height but as long as the threshold animation starts to act, those borders are lost and the liquid loses the feeling of something “thick”. To me, this looks as if you were cutting paper. Here you can see the normals of the image in which you will see what I’m referring to:

Somehow we need to change the normal map over time and sync it with the threshold animation. There was a cool tutorial explaining how they did it on The Last of Us. I will explain here my method with no programmers involved, no crazy maths.

Back in Substance Designer, we will create a normal map directly from the threshold map. We will do this with the Height to Normal node (in this image the blue channel is removed but we don’t need to do it for this example): 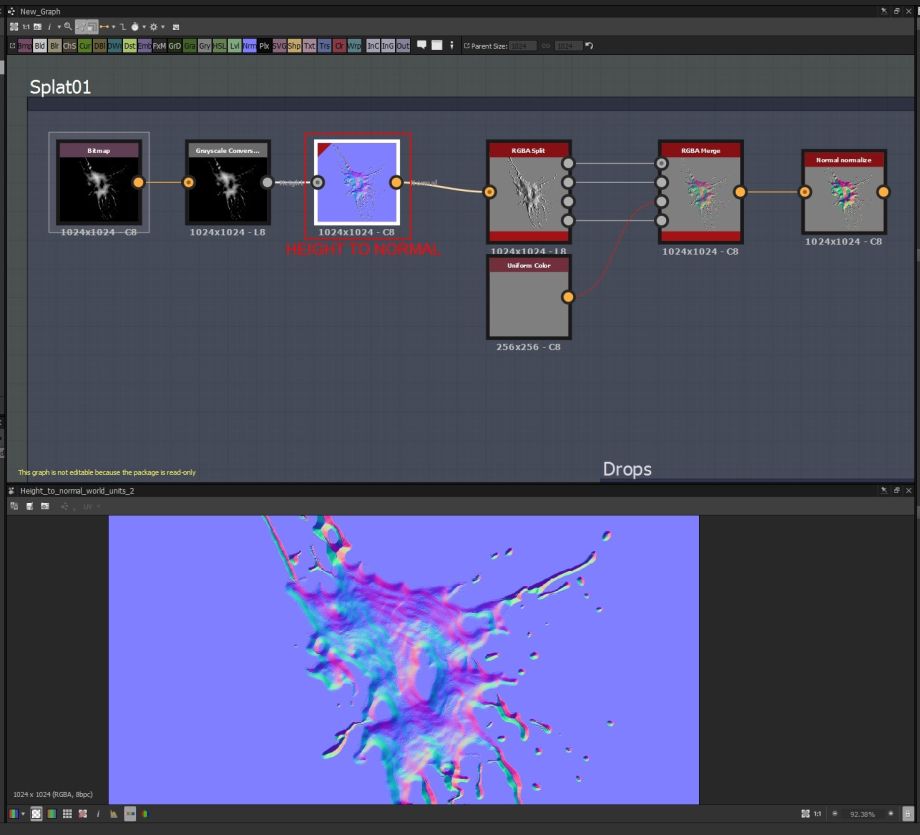 Using this normal map will give us nice borders during the animation but will make the center of it to be “generic” and won’t have the nice details we got from Blender.

So, my way of thinking here was, instead of jumping to the shader itself I started playing around in Photoshop being always conscious of what we can do in real time. Up to this point we have: 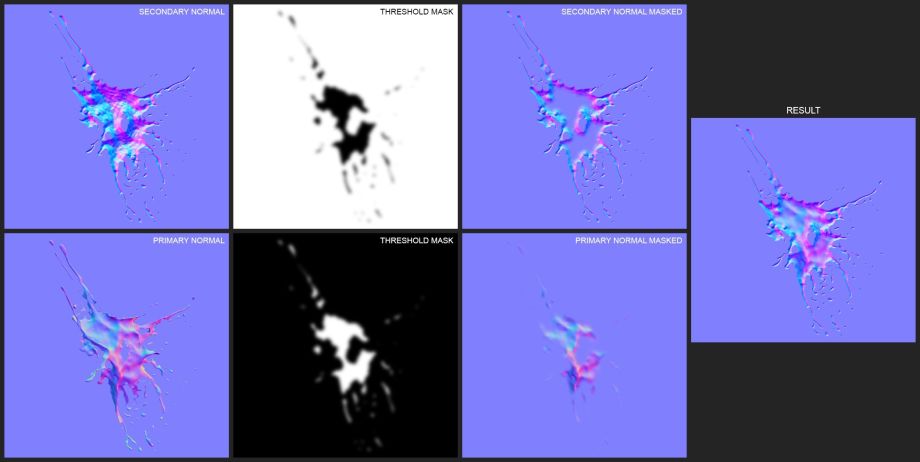 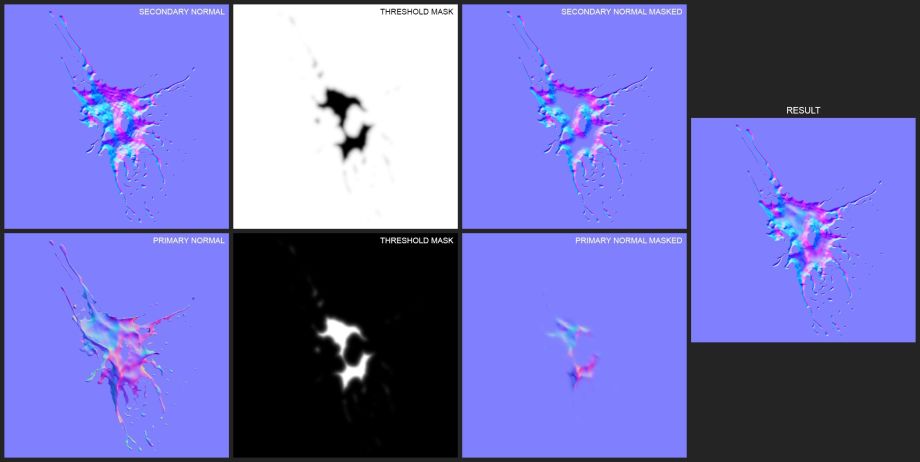 In our shader, we have to mix both normal maps in the same way as Photoshop. So I ended up adding some maths to the mask used in the blend/lerp function (brightness and contrast):

In this example case my final touch was adding UV Distortion to all above so that we had an extra animation on it:

This will be it, the rest would be using this technique with other textures and compose the effect with different emitters. Of course, you have to be careful with how many textures you add and all, that’s why I used this technique with a generic normal map plus generic threshold map to use it in other cases in which I didn’t/couldn’t add a specific texture. Here is again the video with the result in the game: