Martin Nebelong showed us the way of using VR technologies in 3D scene production. The headset used was Oculus Rift. Martin’s new Gumroad tutorial goes into detail about how to make the scene from this article and covers all techniques he used both in Quill and Blender to get to the final image. Use the code  “80lvl” during checkout to get a 25% off on any of his Gumroad tutorials!

My name is Martin Nebelong, and I am a freelance artist living in the small Scandinavian country of Denmark. For the last 15 years or so, I’ve made a living as a freelance illustrator.

I’ve worked with a plethora of clients, from large companies like LEGO to small indie bands. For about 6 months now, I’ve been working part-time as the art director at MasterpieceVR. MasterpieceVR is a 3d sculpting tool for VR and we’re also developing a VR rigging and skinning tool called Masterpiece Motion that I’m very excited about.

You can see an example of Motion  here:

For the last two and a half years or so, the most part of my work has involved VR in some way. Both client work and personal work. I’ve also been writing tutorials about VR for 3D World Magazine and Imaginefx.

Being among the first in the world to fully embrace this way of creating artwork, has been a great journey so far. It’s brought me to Portugal working for Oculus Medium at THU (Trojan Horse was a Unicorn), the states to speak about Quill at Oculus Connect 5 in San José and London to speak about my work in VR in general.

The creative tools in VR have evolved a lot, and in a matter of a few years, this fact has transformed my creative career. Up until VR came around, I saw 3D as a necessary evil. While I felt like I needed it to keep my work up to speed, I never really enjoyed it. Working with 3d I felt like I was missing the freedom you have when you just draw lines and create worlds through that.

With VR though, I feel even more freedom than I did with a pen and paper. The feeling of being able to create anything is amazing. Most VR tools like Oculus Medium, MasterpieceVR, Quill, Tvori, and other are all very easy and intuitive to use, and you don’t have to go into very technical concepts to make what you imagine when you start out on a new sculpt.

It really feels like the future is now. I hope my work can help to convince other artists to jump onboard. 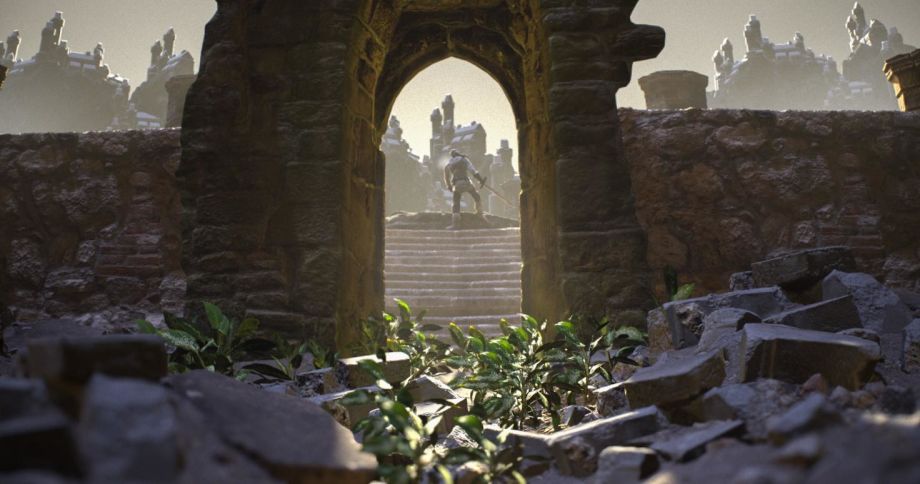 A scene composed in VR in MasterpieceVR using a combination of kitbash items from Megascans and custom built models.

Quill is a drawing program made for VR. As opposed to Medium and MasterpieceVR’s voxel-based approach, you draw with flat planes and primitives in Quill.

It’s an amazing tool that basically allows you to create almost anything you can imagine (and have the skill for). It also allows you to quite easily bring these scenes to life with animation. When you buy an Oculus Rift Headset with touch controllers, you get Quill for free.

I’ve been using Quill for a few years now, ever since I got my Oculus Rift headset. As my background is 2D, I’ve found that I can use all the skills I’ve learned through that but in a 3d environment. It’s difficult to describe the feeling of moving around in your own painting, and even now I still feel like a kid building with super-powered LEGO whenever I work in VR. 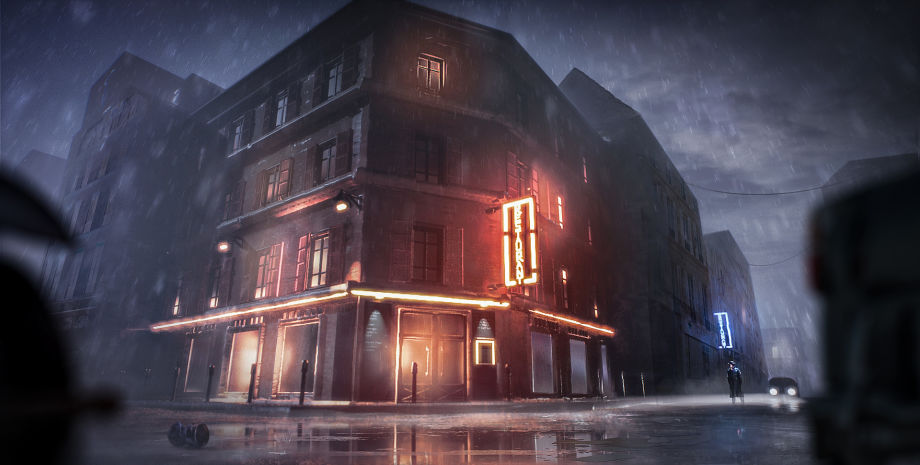 Here’s an example of a scene that started out in Quill. The building was drawn in less than an hour and could then be used as a base for further work outside of VR. Check out this small youtube clip to see what it looked like in VR.

For me, Quill wasn’t love at first sight. There are a lot of inherent limitations in the program. No light sources, no textures, no polygon editing tools. But once you accept these limitations, you can start to enjoy the program, and that’s what happened to me. I saw the work of Goro Fujita and other early Quill users, which was mind-blowing and made me keep on trying.

There’s close to no scale limit in Quill, and the program is very well optimized. At some point I drew myself in VR, standing in there for hours. I zoomed out, drew the city around me. I zoomed further out and drew clouds and birds flying by. Further yet and drew our planet. I kept going and drew my world at galaxy level and I could have kept going. Everything was drawn in a very simplу way but still, it was an amazing experience!

I wouldn’t really call Quill a modeling tool, it’s more like a freehand 3d drawing tool. A lot of people struggle with precision in the program, but you’re able to draw very precisely by using angle snapping, line tools, and an ingenious selection and transform gizmo system.

For this particular project, I wanted to be as efficient as possible in creating the scene. I started out by turning on the grid in Quill, and then I used that as a guide to drawing a set of building blocks for the scene. By using the line tool in Quill, you can align to XYZ by holding down your left trigger while drawing with the right. Then once you have a perfectly aligned shape, you can reposition and rotate this using the Gizmo in Quill. If you make a selection and don’t see the Gizmo, just push in on the left-hand thumbstick. To rotate in increments, hold down the left trigger while dragging with your right hand on the rotation-circles in the gizmo. 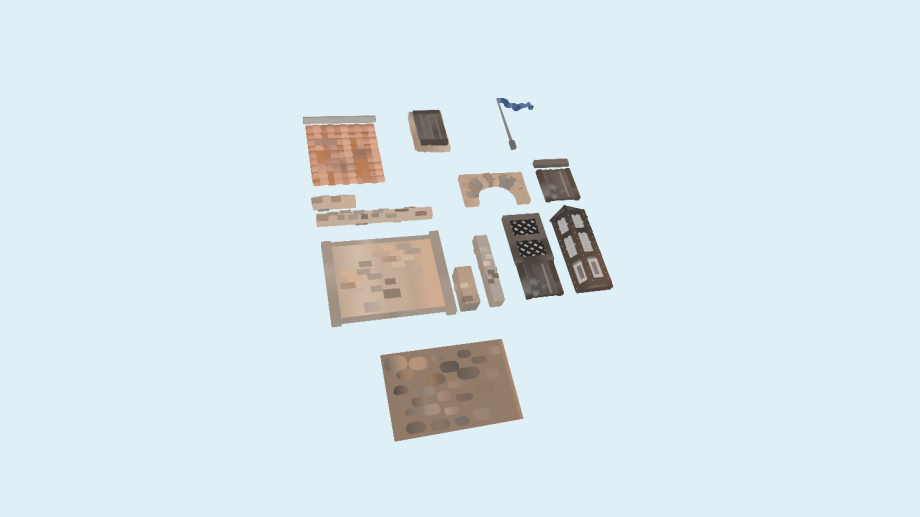 Here are the finished building blocks that I used to make a large portion of the scene with.

Once I had made those blocks, I could then easily copy/paste them. To make a copy in Quill, make a selection and then hold down your left trigger while dragging with the right grip button. To repeat that copy, push right on your left thumbstick. (If you’re a lefthanded user, just reverse my instructions). 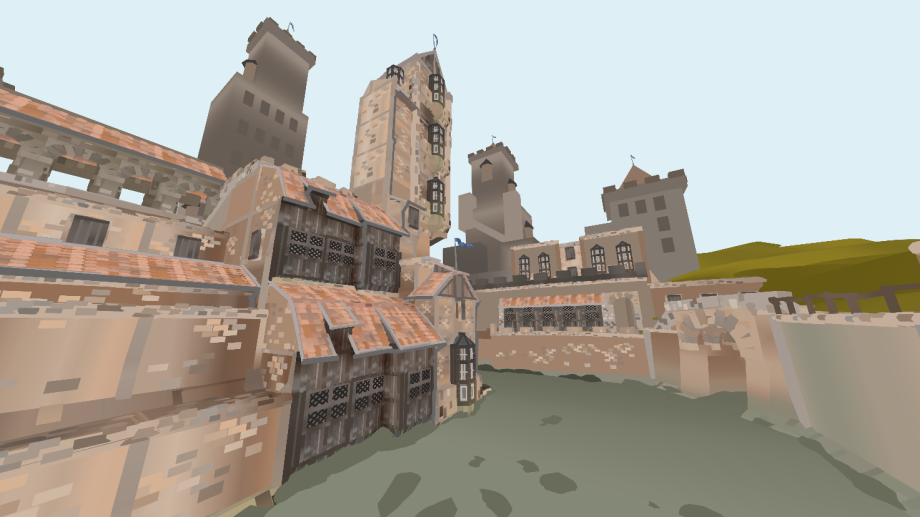 This is what the finished scene in Quill looks like. I make sure to make new layers to separate material types, so a layer for water, one for windows a layer for bricks, one for grass hills, etc.

I didn’t have to do any optimization outside of VR to the model from Quill! I drew the whole scene in VR, exported as an Alembic file, imported into Blender and could then start lighting and adding shader tweaks right away. It says a lot about the optimized nature of the files from Quill. Btw, the Quill scene itself is only 10 MB! There is an “optimization brush” in Quill that allows you to optimize your drawing before export. I used this whenever I could get away with it without losing noticeable details.

If you need to, you can optimize Quill geometry easily in Blender. Just select the surface you want to optimize, use the “tab” key to enter “edit mode”. Select all faces, open the “mesh” menu, select “clean up” and “limited dissolve” or “decimate geometry”.

For the scenes like this, most of the texturing actually happens in Quill VR when I paint the surfaces. In Quill, there’s only color, and no surface properties like reflection, bump maps, etc.

But these colors transfer perfectly when you export the scene (add an attribute node in Blender, write “rgba” in it and hook that up to your color input), which means you can use the color in Blender for example, and then tweak shader settings like roughness, reflection and so on. That’s how I made the water in the scene, along with other of the effects I use.

I use noise textures a lot in the node editor in Blender, to add variation to my Quill surfaces. Combined with a colorramp node you get a lot of control over the output of your material.

If you want to, you can also use your Quill scenes as you would a normal 3d model and unwrap and add regular textures to it. I haven’t done much experimentation with this though, as it’s a much more time-consuming process. Would be fun to make a Quill object and take it through unwrapping and then texturing in Substance Painter! 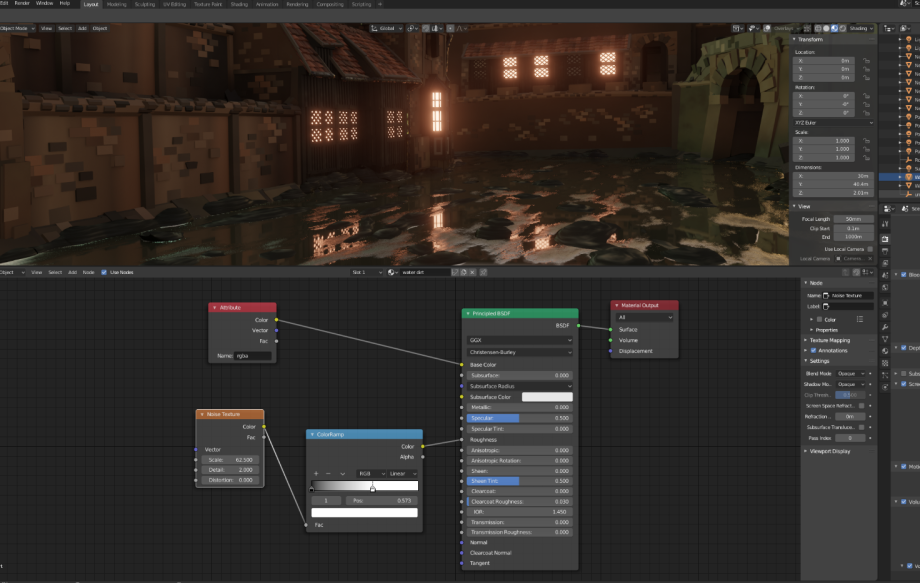 Here’s a look at how I tweak materials through the shader editor in Blender. Notice the attribute node, the noise node, and the colorramp.

Thank you! Light and mood are one of my favorite subjects, and this scene was particularly fun to do! I knew from the beginning that I wanted the effect of light shining through a thick cloud cover, so I added a few spotlights above and to the right of the towers in the scene to illuminate the front tower and the one in the back. It’s a good idea to lead your viewers through your scene by placing lights strategically like in this case.

To get the atmospheric perspective and fog into the scene, I switched from object mode to world in the shader editor tab. Here, I added a principled fog volume to the volume input of the material. To see the effect in Eevee, remember to turn on volumetrics in the Eevee settings. Make sure both Volumetric lighting and volumetric shadows are switched on as well. This will give you the effect of light shining through the fog volume.

I also made a few cube objects and added fog volume shaders to those as well to be able to more precisely control where the fog would appear. For example, I added a fog cube in the middle ground between the foreground tower and the wall behind to separate those elements a bit. I added a noise node to the strength of the fog volume node to give a more natural impression. To see this effect, add a color-ramp between the noise node and the strength input, and tweak the settings here to get more defined contrast between fog and non-fog. 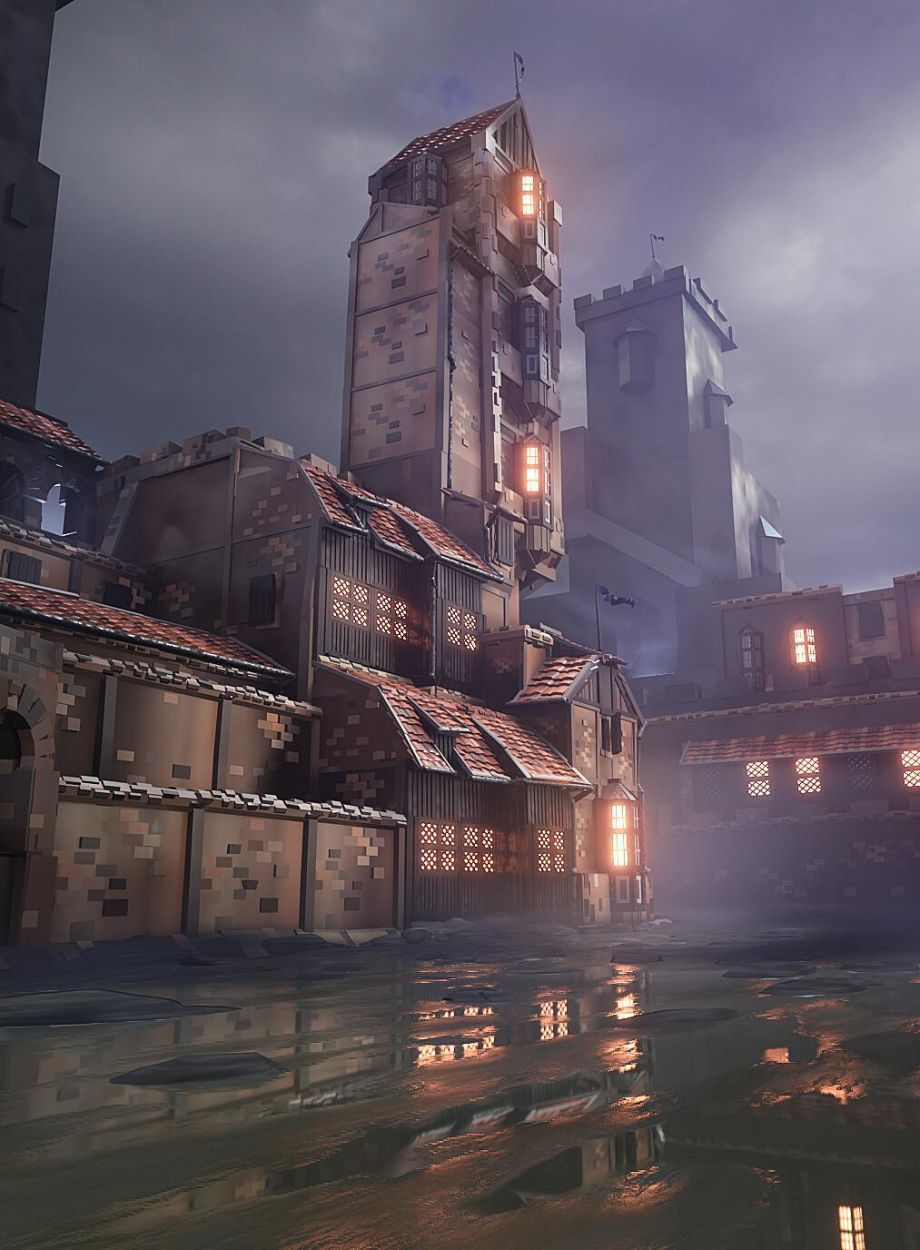 As you might be able to tell, I’m a bit biased because I’m such a big believer in VR as a creative tool and even work for a VR sculpting company. But I truly do believe that this has the potential to change how we create art. Otherwise, I wouldn’t have spent so many of my work-hours in VR over the last few years!

I haven’t tried using these tools on big productions yet, but I know others who have with great success. I’ve used it for many client projects though, and here it’s enabled me to deliver much better results to the client than what I could have done with other tools, in a much shorter amount of time.

It’s unmatched for previs and concept art, where you quickly need to get ideas into the world. In my 15 years of freelancing, I haven’t come across such a game-changing tool before.

Check out this scene I made using assets from the fantasy city:

The sculpting in Quill took no more than 40 minutes or so, and I could then bring that model to Blender and combine it with a Dragon sculpted in MasterpieceVR, rigged and skinned in Masterpiece Motion and animated in Tvori. The dragon was unwrapped outside of VR and painted using Substance Painter. I hope that in a year or two we’ll be able to do all this directly in VR.