Leah Jackson talked about her 3D concept art that got her the first place in the Blizzard Art Contest. The project was created in 3ds Max, 3DCoat & Toolbag.

Leah Jackson talked about her 3D concept art that got her the first place in the Blizzard Art Contest. The project was entirely created with the help of 3ds Max, 3DCoat & Marmoset Toolbag.

Hello! I’m Leah and I am a 3D Environment Artist with a secondary passion for Concept Art! I’m originally from Miami but I moved to Cali to pursue a career in the Games Industry. As soon as I found out that making art for games was possible, it felt like the universe presented me with the ultimate dream career. The Blizzard Art Contest was my first full-scale environment project and it was by far the most challenging obstacle for me to overcome. Up until that point, my artwork consisted of Concept Art, paintings, and smaller 3D props. I currently study at Laguna College of Art and Design! This is where I discovered my love for 3D after taking a few classes with amazing professors and peers! 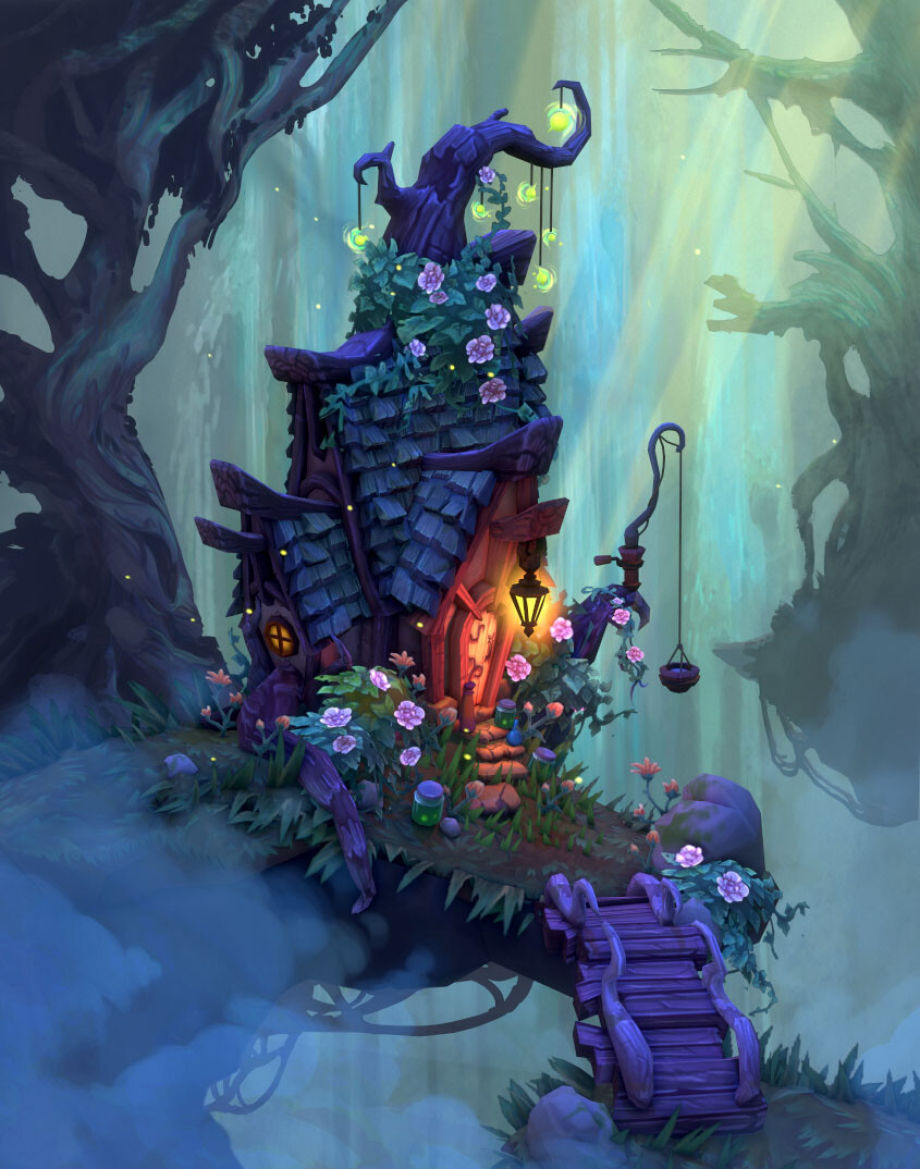 Over the Summer I had a lot of free time to explore a personal project I’ve been trying to create. I used to be scared of sketching because I wanted everything to be a perfect illustration. To break out of this fear I decided to flesh out some environmental sketches including a few cottages from which my main character starts her journey. I ended up only liking one page out of that sketchbook, but I learned to let go and discovered that the more you flesh something out, the stronger you can make the foundation to build on top of. When developing ideas before settling on a design, it is very useful to create many iterations to push and pull where you can take it. 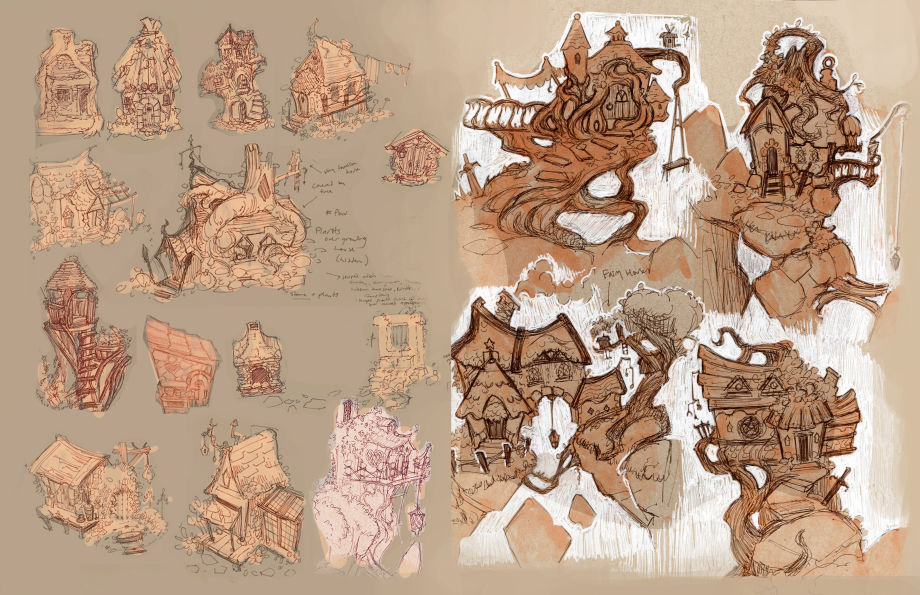 It all started with exploratory sketches created to try and capture an interesting design and shape. I really wanted to create a mystical hidden cottage deep in a forest with fae energies and a magical waterfall. My inspiration for this was the Well of Eternity and the magic that turned Dark Trolls to immortal Night Elves in World of Warcraft. 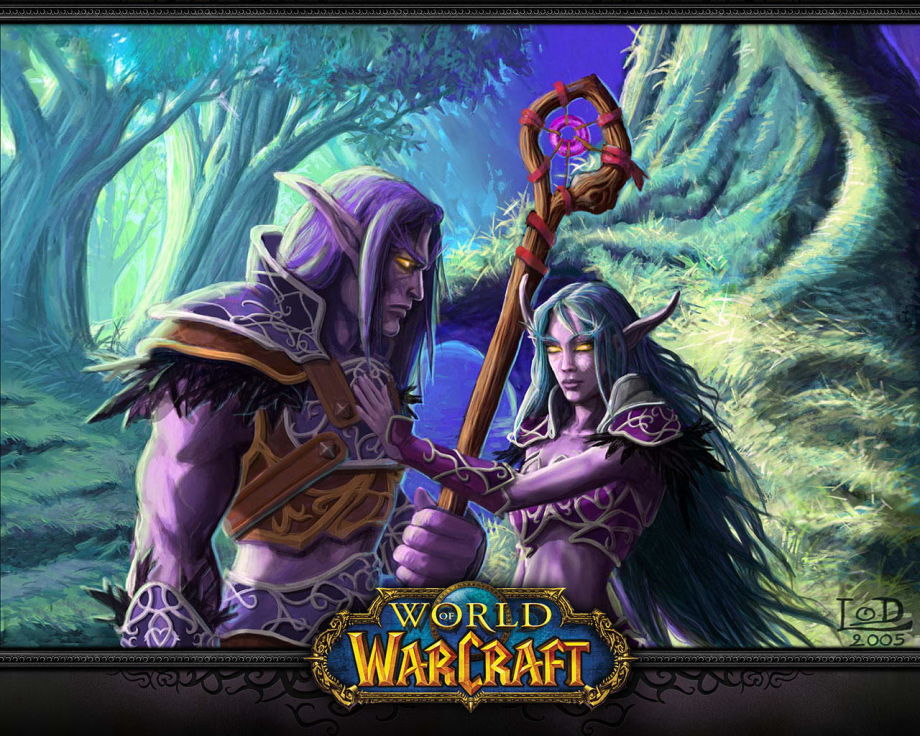 After finding a sketch that felt like a strong foundation, I decided to start building it in 3Ds Max, keeping in mind that the design could still change from that point forward. I tried to keep everything low poly and only add geometry in areas that would effect the silhouette. If there was geo that did not affect the silhouette, I would take it out. I didn’t move on to texturing until the silhouette was strong. Putting your model into flat-shade is the best way to evaluate shapes. Even in 2D, it is important to make sure the design and values are working before jumping into rendering with color and light. 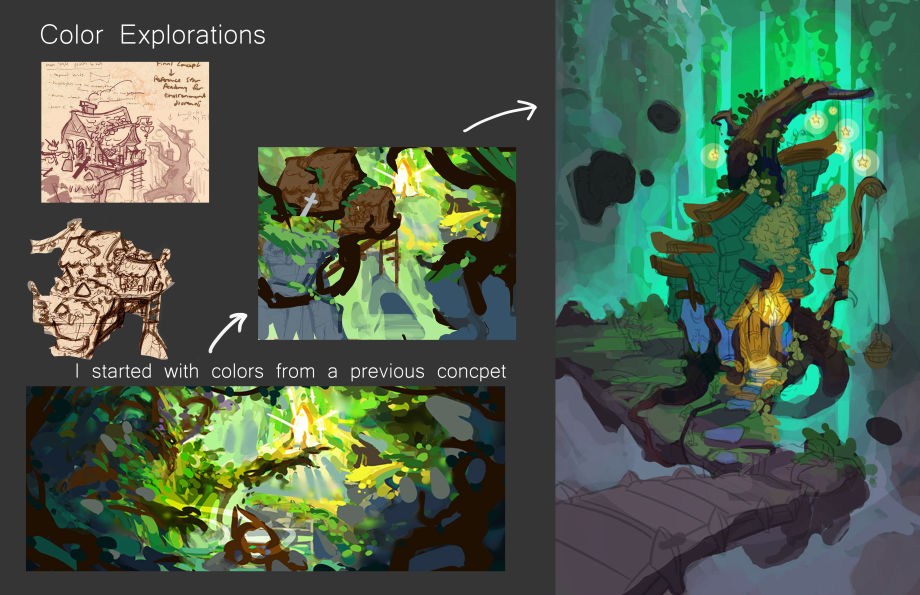 I ran into a few issues when interpreting my concept to 3D. I realized that my roof had no structure in the concept, so I had to adapt and change it in 3D. This helped me better understand challenges that can be presented in the pipeline between 2D and 3D. After everything felt right in the shape stage, I began to unwrap in 3ds Max and started to block out colors to every object in the scene using Photoshop. I imported my model to 3D Coat to make sure that none of my seams would show through and applied more color variation using broad brush strokes. 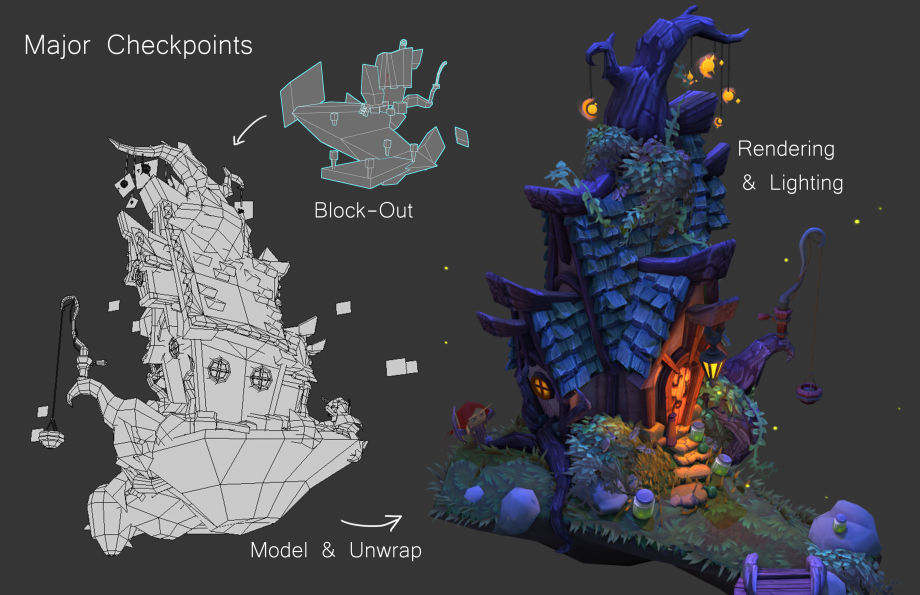 This program is great for applying colors and harmonies directly on your model. I had a rough color sketch to guide me in the direction I wanted to head, but it did evolve the more I worked on the project. My 2D explorations helped guide me through a project of this scale. It’s always great to break everything down into plots of production before building something of that scale to avoid overwhelming yourself.

Throughout creating this project, I would jump back and forth between 3D and 2D. After receiving critique from my mentors and peers, I would apply a paint-over on a screenshot of my model before applying it to the project itself. This helped give me an opportunity to test the changes before committing fully and also gave me a strong visual guide on where to head. Working with paint-overs can help larger scale projects feel less intimidating because they act like a visual map. 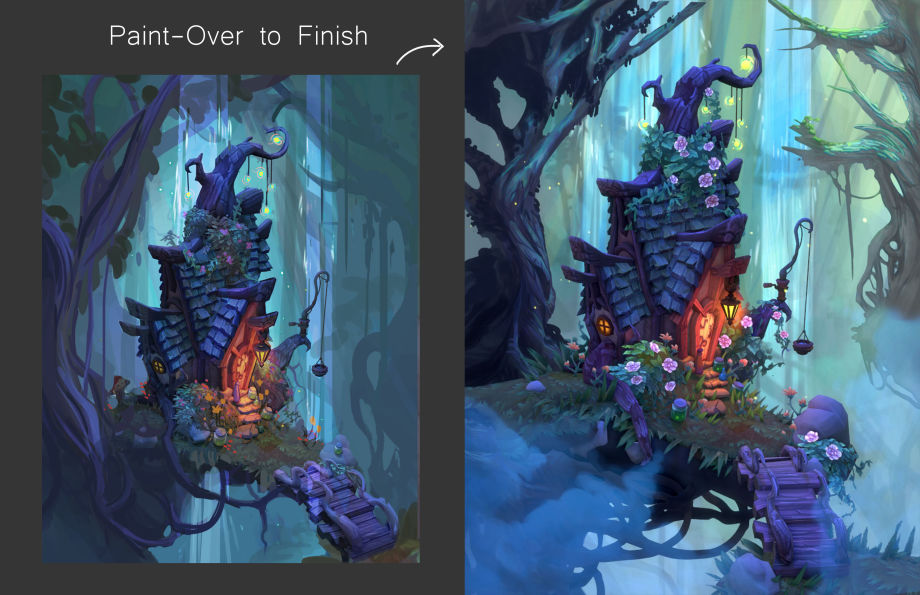 Organic shapes like the trees and roots were very challenging to make in 3D. They started off as low poly cylinders with enough geo to make the shape feel smooth and rounded. I added swift loops to help round out curves. Sometimes, I needed to adjust the angle of my loops if it didn’t go in the direction I wanted. After some push and pull with my shapes I was able to create tapered organic curves.

I used Marmoset once everything was moving into rendering to see how light would react with my colors.

I added rays of light using alpha cards to make the scene feel like the sun was poking through the thick foliage of the trees. I wanted the Cottage to look like it was built around a magical tree with some vines growing out around the roof to make the piece feel overgrown and consumed by nature. I wanted to push details like the fireflies to make everything feel more alive. It is important to make sure the overall scene is working before adding small story elements like this.

I think foliage and elements such as the flowers were probably the most challenging textures to work with. I personally think my flowers need more work because there are some areas where there are too much contrast and detail, which feels less cohesive. I feel it’s important to be critical of one’s work even if the piece is already finished. In reality, nothing will be 100% finished because it can always be pushed further. The grass and flowers were applied on alpha cards. There wasn’t much geo to them. I added minimal verts to pull in the centers of the flower and some loops to the grass to make it feel curled over. If I didn’t do this everything would look flat like a paper.

When it comes to rendering materials, it is absolutely important to have strong reference images. There are so many nuances that occur that you can’t recreate out of your imagination. With each texture, I blocked in a local color for a base. Once everything had a base color, I made sure all of the elements in the scene were flowing and harmonizing with color and value before moving to rendering. I also made sure to evaluate what areas would need unique texture space and what textures could be reused and repeated throughout.

For example, the bark was reused around the scene. I wanted the top root to have more contrast than the rest to lead the viewers eye to the focal. I had to experiment with lighting to make sure the other root and bark parts were being grouped in value so that it didn’t become too noisy. 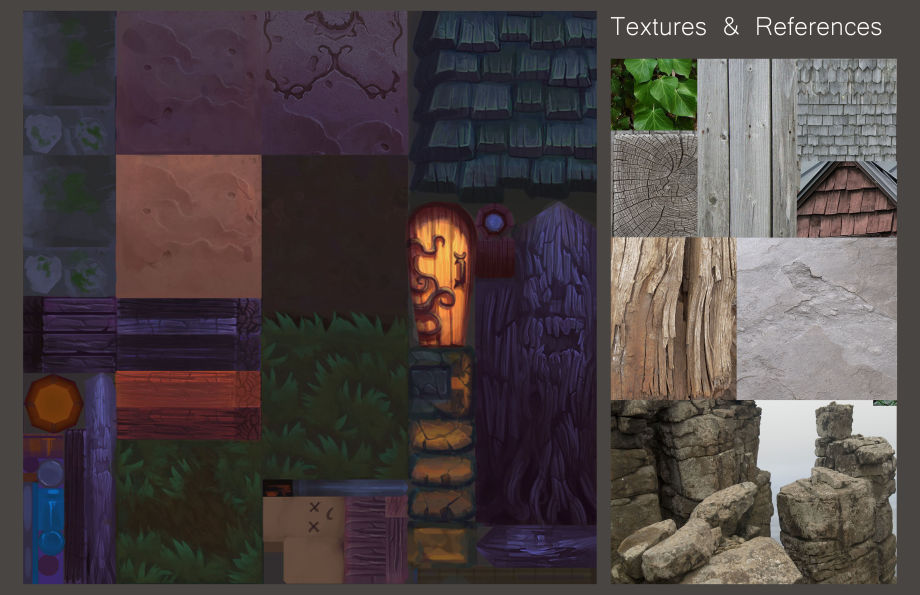 The roof required a lot of troubleshooting, and my first iteration of it isn’t pretty. I wanted there to be the dimension with the tiles on the roof with the silhouette, so I poked in the verts at the tops of the tiles and pulled out the bottom ones. Painting in an omni perspective makes this process easier and smoother since you consider all of the planes of the object you are painting. I added some internal parallax and brought variation so the roof didn’t feel too flat. I added some floating tiles that were cut out from a duplicate of my roof to create this illusion. In environment art, I’ve learned that analyzing what you could repeat, or reuse with geo can help push things farther along.

Unique textures should be reserved for hero objects or focal points. Basically, anything that is special and isn’t repeated throughout the composition can be created uniquely. It was important for me to practice this because it is how worlds are built in video games. 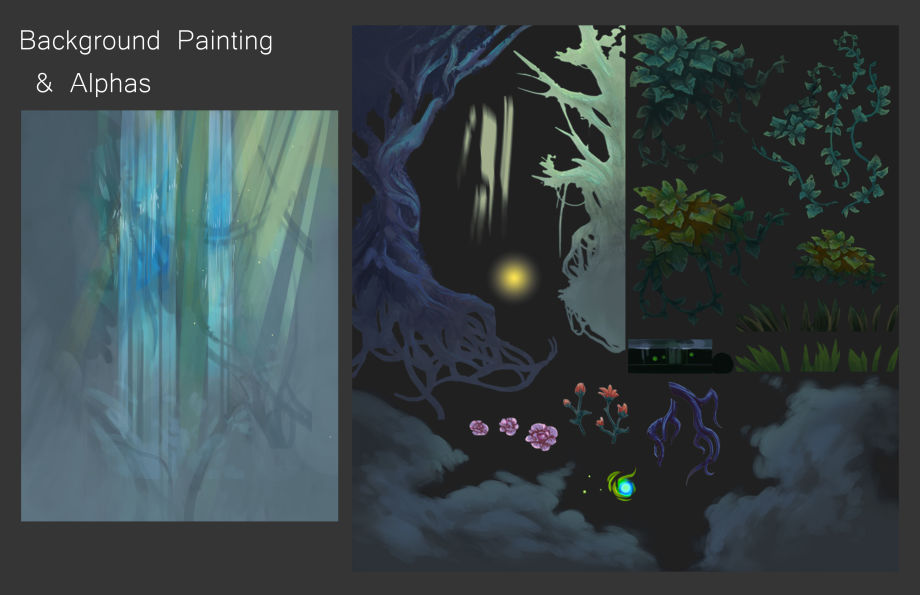 As for the hand-painted style, having a background in traditional painting helped me channel the kinds of brushstrokes and “lost & found” edges that make something feel painted. I think I created this look subconsciously since I’ve been painting traditionally longer than I have digitally. I recommend plein-air painting or simple still-life studies for practicing with traditional paint. There is a lot that can be learned with mixing colors manually and interpreting what you see from life that one can carry into digital work.

Trying to capture the World of Warcraft style was much more difficult than I had anticipated. Most people would say that chunky shapes and cuts to show wear and tear would define the style. I have discovered that the style carries more nuances than meets the eye.

Shapes are the most important read, but one should also consider what the lighting looks like and how colors transition. I still feel that I have not achieved a satisfactory level of capturing this World of Warcraft style. I made sure to look up what the past contest Winner Submissions looked like to see the quality standard that I needed to reach. To help me better understand the WOW Style I jumped in game and explored areas with similar architecture to what I would be working with and sketched rough master copies. Apart from breaking down the visual language, I would highly recommend studying the game itself and also looking on Wow Model Viewer to see how certain assets are built and created.

It is also useful to see what texture sizes are being used and how UVs can be laid out and used to your advantage. Seeking feedback from artists that have a style you want to achieve and asking them what things are working and what things need to be pushed can help tremendously. If there is a consistent agreement among multiple viewers on something that isn’t working, then it probably means that thing needs to be changed. I hope sharing my process and thoughts could be of use to others trying to pursue a similar path. The best piece of advice that I could think to give is to never let anything discourage you from reaching for the stars. There were times that I didn’t believe in dreams, but the times that I did were the ones that pushed me to where I am today. Keep on climbing! 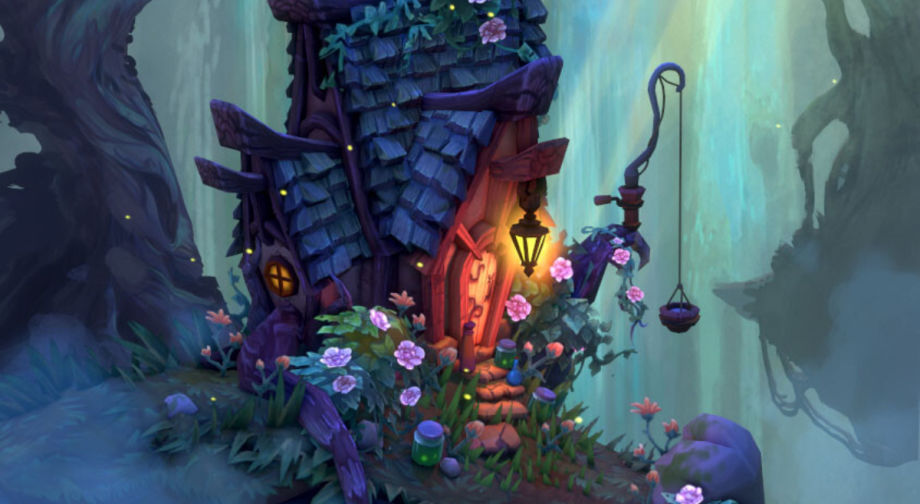