Dawnson Chen did a breakdown of his lovely stylized Witch’s Cauldron diorama created as apart of CGMA class “Stylized 3D Asset Creation” with Kevin B. Griffth. 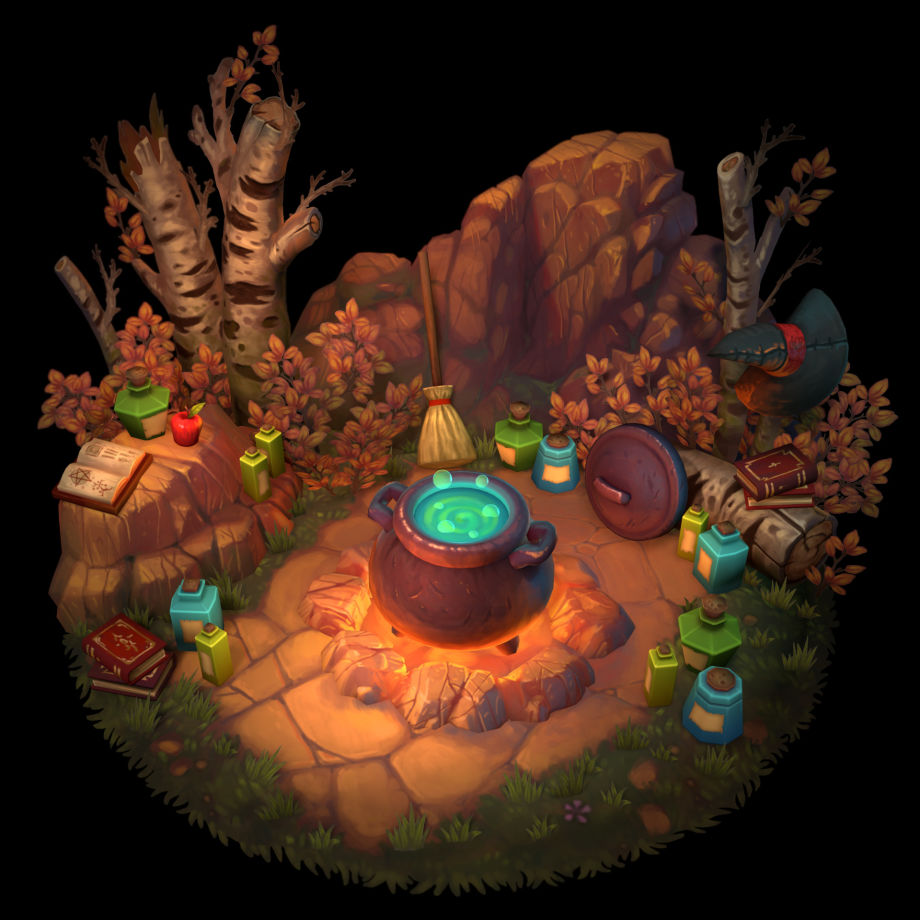 Hi, my name is Dawnson Chen and I am currently taking the Stylized 3D Asset Creation for Games course, taught by Kevin B. Griffith, on CGMA. I am going to break down one of my assignments we did in the course.

I graduated with a four-year Bachelor of Arts and Animation program at Sheridan College. That was where I learned most of my traditional skills, like drawing and painting. Following Sheridan, I took a one-year Game Arts program from Seneca College, where I learned how model and texture.

After school, I landed a job at Gameloft Montreal as an Environment Artist, and that is where I currently still am. We recently released a new game, Gangstar New Orleans, which is my first released title.

This is my second CGMA course; the first was Environment Design with Aaron Limonick. The goal of taking both these courses was to improve my design skills. Both Aaron and Kevin have been great mentors in helping me achieve that.

The goal of the assignment was to create a small stylized 2.5D vignette that included multiple material elements: rocks, terrain, foliage and something manmade. It is based on a workflow similar to games like Diablo 3 and League of Legends.  We used four 2048 textures, one for each element, and the final scene was to be presented and lit in Marmoset Toolbag.

I chose to do a witch’s cauldron brewing a potion in the woods. Normally I would do a bit of a concept painting, but time was an issue. I only had a napkin sketch of the idea, so instead, I found a really nice painting on Artstation, done by Grace Liu. I used it as a mood inspiration and tried to imagine my cauldron inside that painting. 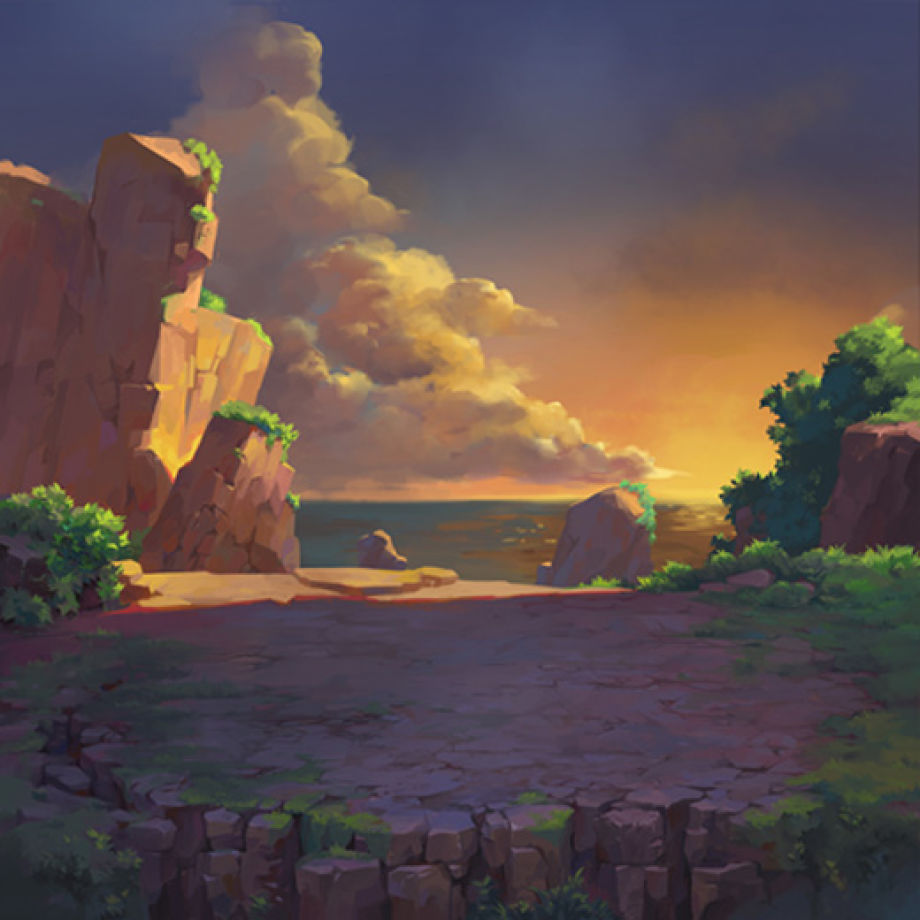 I began modeling a block out inside of 3dsMax, just to get a sense of scale and position for most of the elements. Everything is really rough here. I didn’t use any of these meshes for the final. 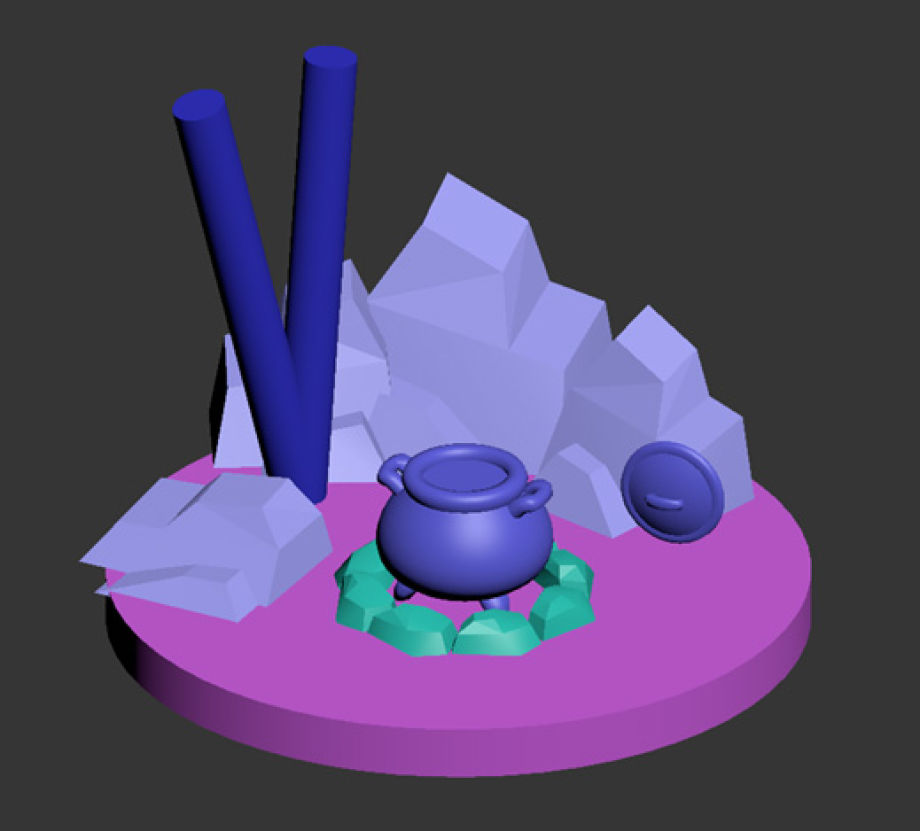 Then I went to Photoshop and began painting the rocks. I used the meshes from the block out as a reference and painted their approximate shapes. When I was happy with the painting I went back to 3dsMax to start modeling. I started by mapping the rock texture to a plane and began cutting the plane, trying to follow the volume of the rock.

Once the plane was all cut, I began to mold it into a 3d shape. I pulled out the areas that came forward, trying to give the rock some volume. This part can be a bit tricky; it just takes some time to massage the mesh into the shape you want without stretching the texture too much. After I finished all the rocks, I replaced the block out mesh with the textured mesh to see how it fit into the scene. 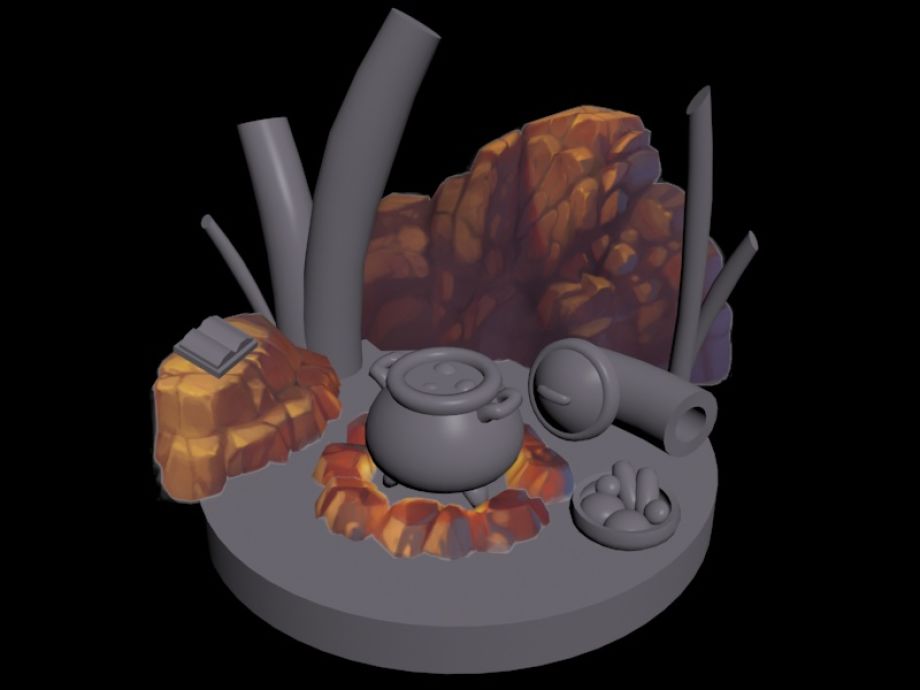 The next part was the terrain. I painted two tileable textures: one rock and one grass. Then I blended the two of them together, trying to keep the shapes of the blades of the grass. After I painted in a rough shadow on a separate layer, I keep it rough because at this point things are still being shifted around. I also painted a circle in the alpha channel to give the base a circular shape and grass coming off of the edges.

Here I did a quick paint-over of the props I wanted to make for the next stage. I like doing this because it helps me take inventory of what I have left to do, and also see what I can get away with repeating a few times. As you can see, I changed my mind about a few props for the final. After getting feedback from Kevin and other people, I thought it would be clearer if I left out the some of the props and kept it more focused on the witch theme. 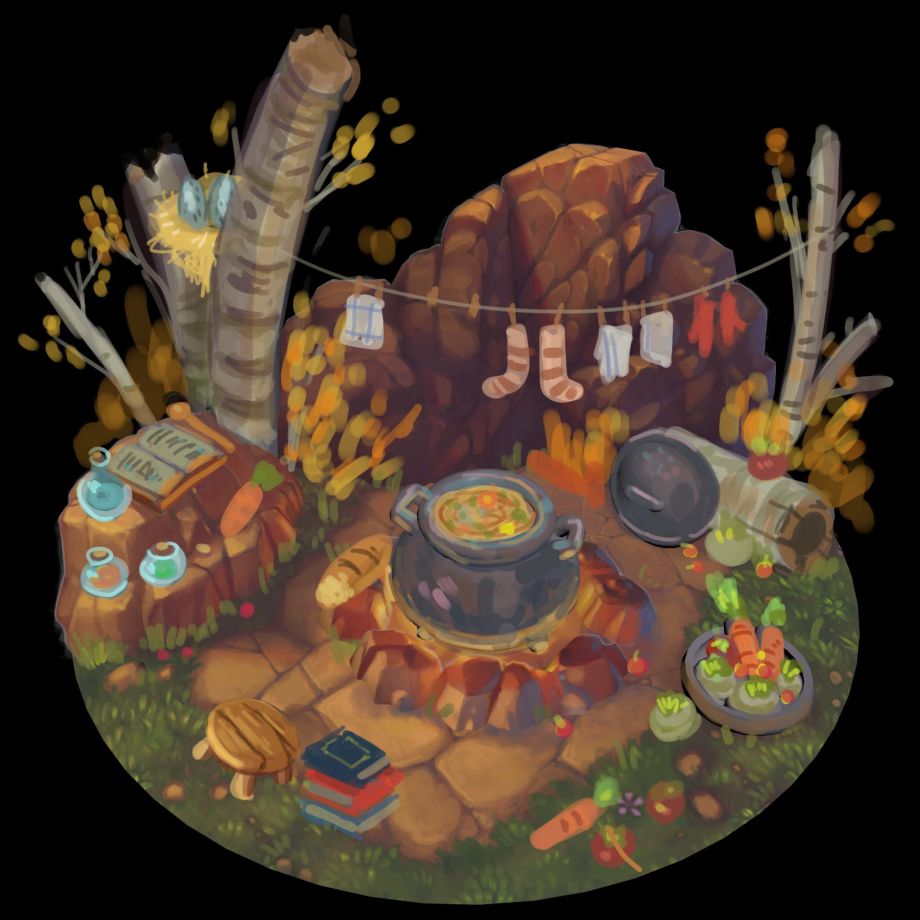 *Note: I added the trees and foliage; they were made the same way as the rocks so not much to explain.

At this point, I imported everything into Marmoset Toolbag and did the first pass on the lighting. The lighting for this scene is very simple. I just had one main warm directional light coming from the top left and a cool backlight to give the objects some rim lighting. Then I added some Omni lights in a few places where I wanted to draw the eye (the fire, the book etc.) 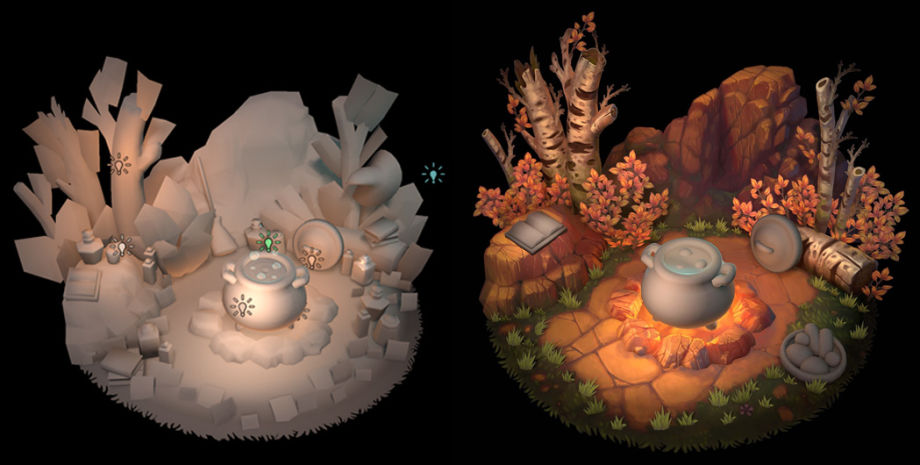 The final step was making the props. Unlike the rest of the scene, which is 2.5D, the props are all 3D. This way I could rotate and place them around wherever I needed. After I finished painting the props, I scattered them around the scene.

Finally, I went back and did a polishing pass. I cleaned up some areas in the rocks and trees, just adding some details at the points of interest. I made sure the shadow on the terrain matched the rocks and props and I fixed the discoloration in the grass planes. And for the cherry on top I added some bubbles.

This was a fun scene to work on. I enjoyed having time to paint everything and polish until I was satisfied. It was really good practice for doing hand painted textures, which I hadn’t done too much of it the past. Thanks, Kevin, CGMA, and Gameloft for the experience.

For more information on CG Master Academy and the Stylized 3D Asset Creation for Games course, please visit the course page on the CGMA website, or email 3d.registration@cgmasteracademy.com.