Kevin Cassidy shared his approach to sculpting creatures in ZBrush: workflow, detailing and reasoning behind it, references, and more.

Gael Kerchenbaum's class and his students

Hey guys, my name is Kevin Cassidy I’m a Senior Character/Creature Artist in the video games industry. I specialize in the concept development of characters and creatures and sculpting high-resolution production models in ZBrush. I’ve contributed to 16 video game projects including Mortal Kombat VS DC Universe, Hunted: The Demon’s Forge, Injustice 2, and most recently Rune 2. I’m currently the Senior Character Artist at Human Head Studios here in Madison, Wisconsin. I’ve also had the pleasure of working at Netherrealm Studios (WB Games), InXile Entertainment, and doing freelance for companies like Liquid Development and Darkside Game Studio.

I’ve been doing character art professionally for over 12 years. I first became a character artist after completing an internship at Midway Games as a part of the Character Central Team. After I graduated college I was then hired as a full-time Character Artist. ZBrush was still pretty new (ZBrush Ver 3.1) and I was on a shortlist of people using it in the studio at that time. This led to some very cool opportunities early on in my career like working on Mortal Kombat. I got the chance to work on the Lui Kang characters anatomy for MK VS DC Universe and then ended up creating the whole Quan Chi character model and textures for the game.

Sauron: How It Started

I’m a huge fan of Lord of the Rings and the Silmarillion. When I heard Amazon was doing a TV series set in the Second Age of Middle-earth,(1,000 years before the films) it got me thinking what Sauron might have looked like underneath his armor. In Tolkien's’ Silmarillion, after the flooding of Numenor, Sauron’s body essentially dies and he is no longer able to assume his fair forms. So I’ve chosen to depict him in all his terrible glory. The only depictions I’ve seen of him were like a pretty, fallen Maia, though hopefully he still retains some of his beauty in my version, however dark it may be. I try to inject beauty, majesty and nuanced personality into most of my designs, even for the villains. 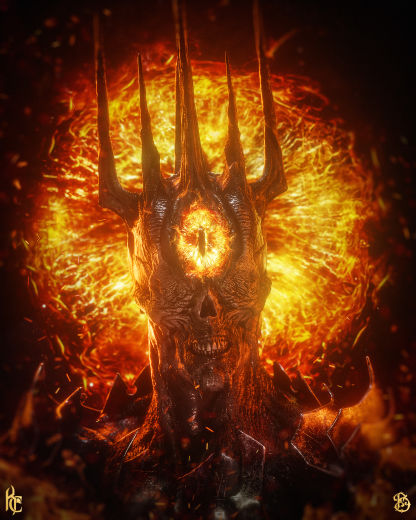 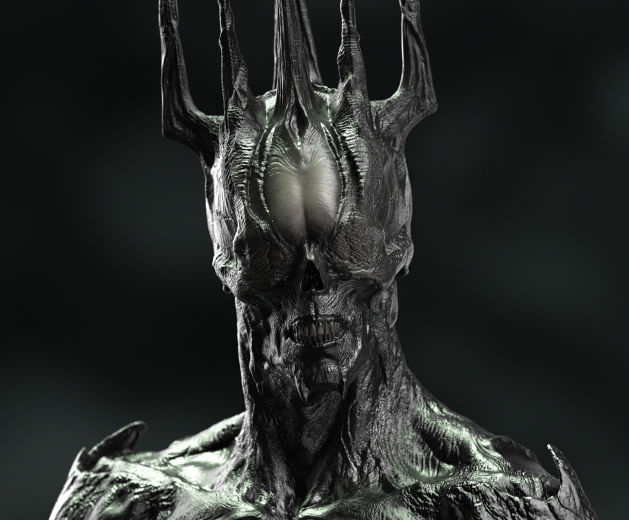 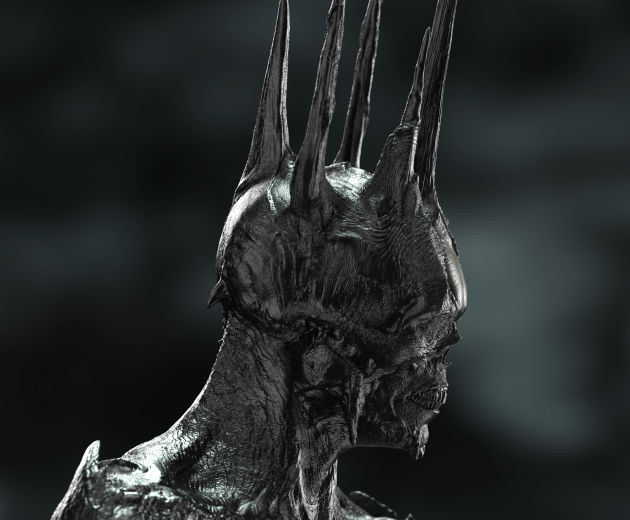 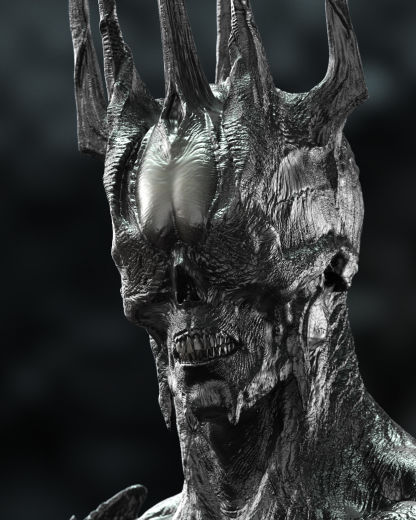 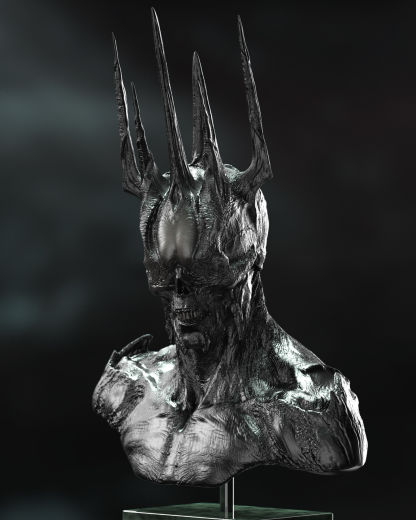 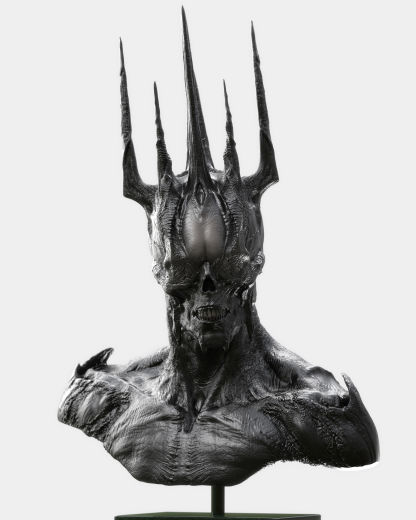 Sculpting monsters is generally a great opportunity to play with anatomy, shapes and explore unique visual languages. It’s also a chance to do a bit of visual storytelling. I do this for game characters I design, so I think it's a natural extension to come up with a backstory for the creatures I make in my personal time.

For personal work, I use straight-up Dynamesh. I start a sculpt from whatever I have - a sphere, an existing base mesh, etc. - it doesn't matter because very quickly I Dynamesh it. A lot of the time, I will Dynamesh at a low enough resolution to have a moderately low-poly level one, then divide that up and project the details back onto it. If I’m going into the game engine or KeyShot I will use ZRemesher and then give the model UVs inside ZBrush. This workflow works well for prototypes to see the models in-game quickly with Polypaint textures or in KeyShot for rendering.

In a video-game production, for anatomy and human faces in particular, I have a base mesh I’ve created for a male and female. Having subdivision levels and a standard UV layout is of course very useful. 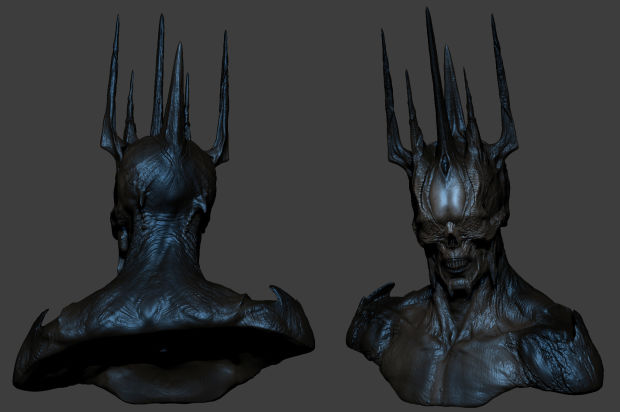 For reference, I’ve been using a program called PureRef. PureRef makes it easy to grab reference images from any place and drag-and-drop them all onto one page with the ability to move, resize, and flip things on the fly. I also use The Anatomy for Sculptors book, and most recently I bought Glaucho Longhi’s, Anatomy Studies Volume 1, I think both are pretty useful. The color-coding of the muscle groups in the Anatomy for Sculptors is excellent. As for Glauco Longhi’s PDF, there is something really nice about looking at his models as ref because the volumes are quite easy to look at whereas, with photos, lighting and texture sometimes make it harder to discern. Plus as digital sculptors, we are used to seeing things as the ZBrush viewport renders them. And of course, I look at lots of different photo refs, especially for human faces and particular body types.

Speaking of the brushes in ZBrush, I use pretty simple things: Clay Buildup (with the default or a softer alpha), Standard, Dam Standard, Inflate, Pinch, FormSoft, Trim Dynamic, nothing new here. I mostly use the Snake Hook brush instead of the Move brush because I think it feels more fluid, especially for designing on the fly in ZBrush. I also like to add some gravity strength to the Standard Brush for some things like skin wrinkles. 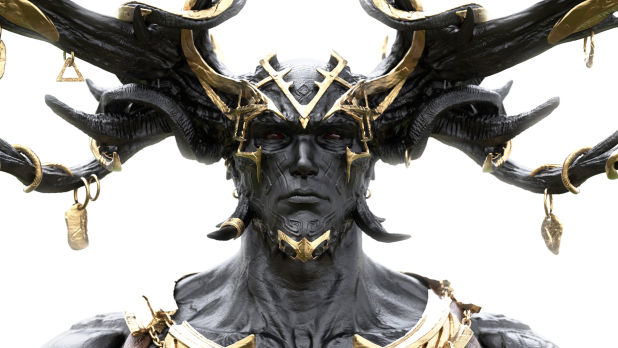 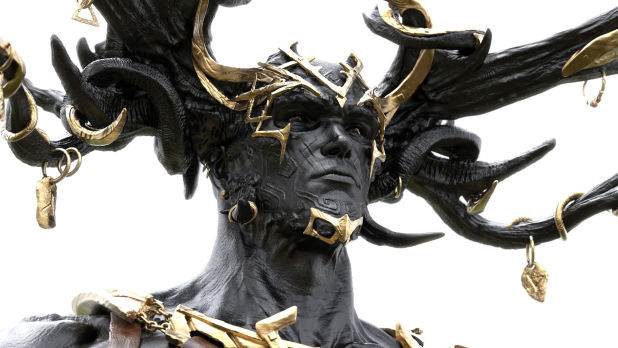 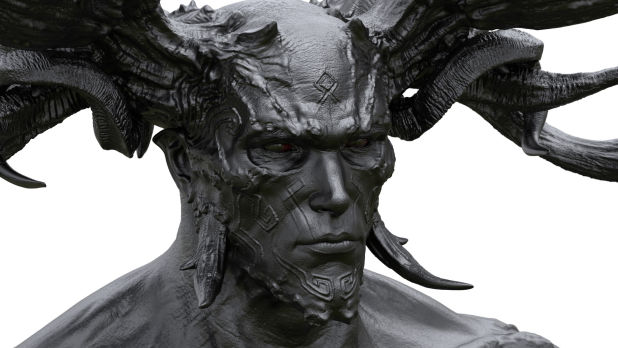 For adding micro details, my process is a mix of sculpting, using some custom alphas and then sculpting again. I store morph targets and then use the morph brush to remove overlapping details on areas I don’t like from the alpha projections. Since I also usually have a poly-paint base early on, I will sometimes use the color information as a mask, masking by intensity or hue and then using the Inflate brush to selectively bump out details and texture information.

The physiology and DNA of a creature would be different from that of a human. So instead of pores and human skin details, I approach the surfacing of my creature designs based on its environment and history. I try to have a range of hard and softer areas. For example, Sauron is made up of harder bony protrusions, with craggy-like surfacing that I sculpt a bit more planar and ridge-like. On Sauron, there are also some areas of visual rest, which feel a bit softer and have a more flesh and muscle feel. Speaking of visual rest, I try to always have a balance of details and rest shapes to help the design read well and not become too noisy.

In the case of Necro Lord, for example, the detailing is a product of the creature's DNA and imagined backstory. Instead of pores, we see how synthetic meets organic, technological grooves and growths. For Sauron, the craggy patterned surface texture hints at burning, mountains, and magma and, in the way it's patterned, some type of intelligence. For inspiration, I often look at nature and the patterns in things like driftwood, bark, and stones. 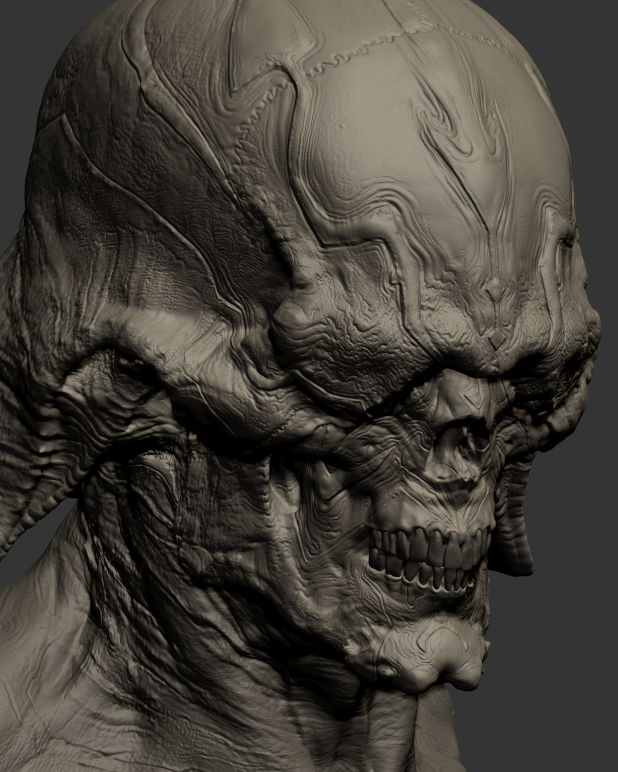 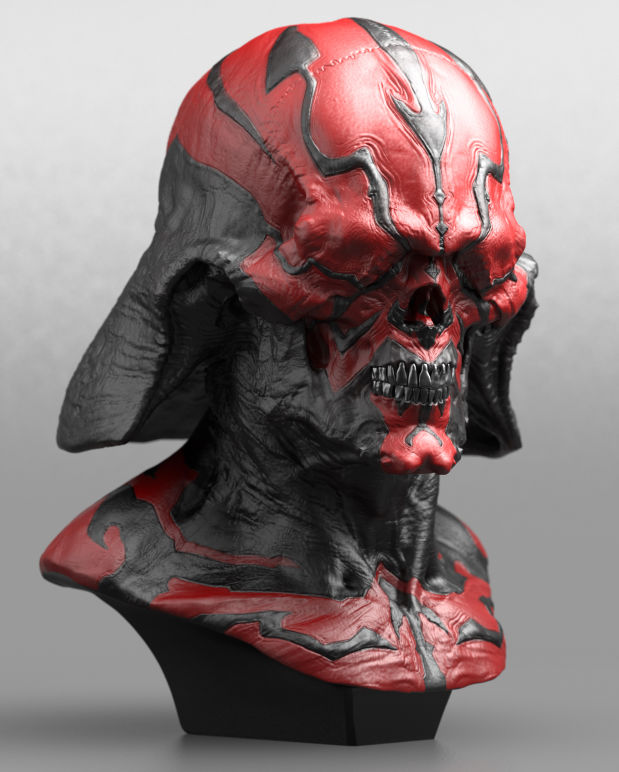 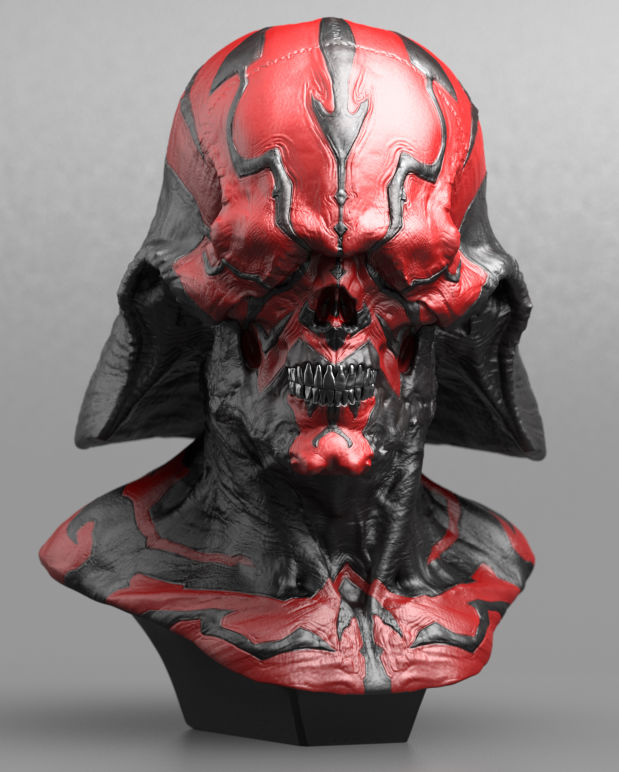 I use KeyShot for all my rendering. I like that it’s pretty easy to get a good image out of it quickly. I also like that I don’t necessarily have to do much compositing and post-work. I change up the backgrounds and HDRI images, plus add pins (lighting) and ramps (geometry) always experimenting and tweaking materials to find the look I’m after. Below is a small breakdown of the Sauron renders: 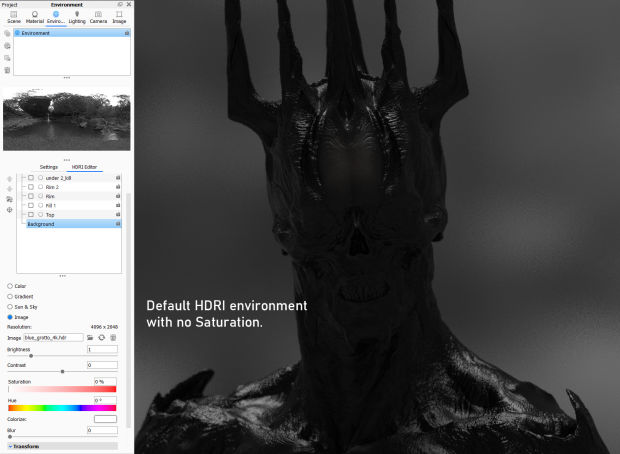 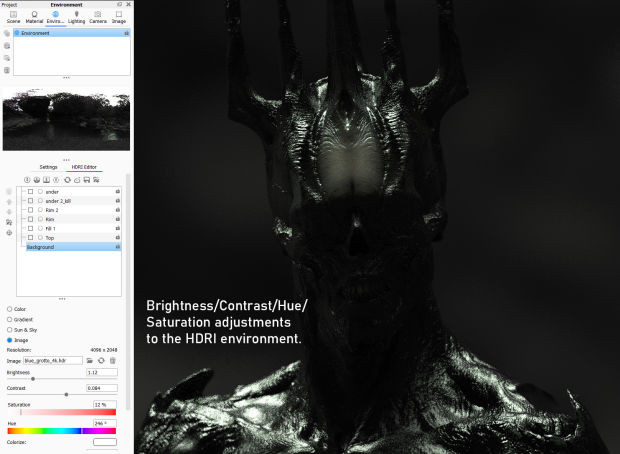 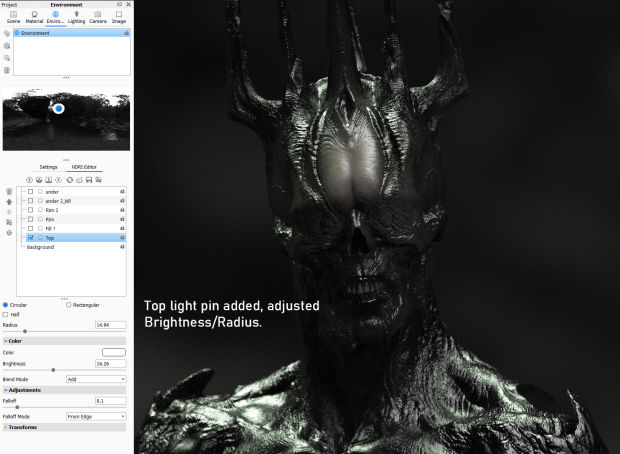 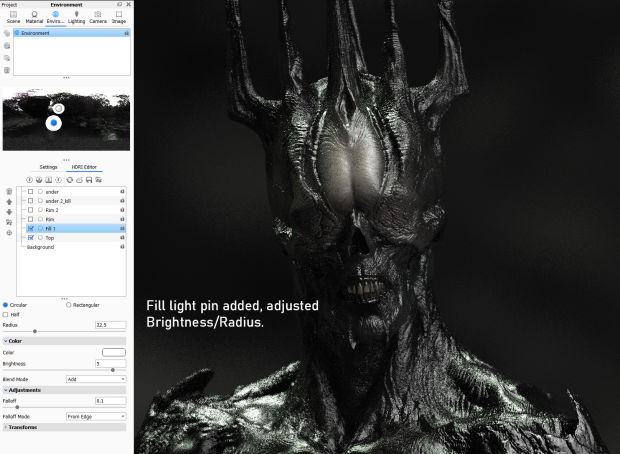 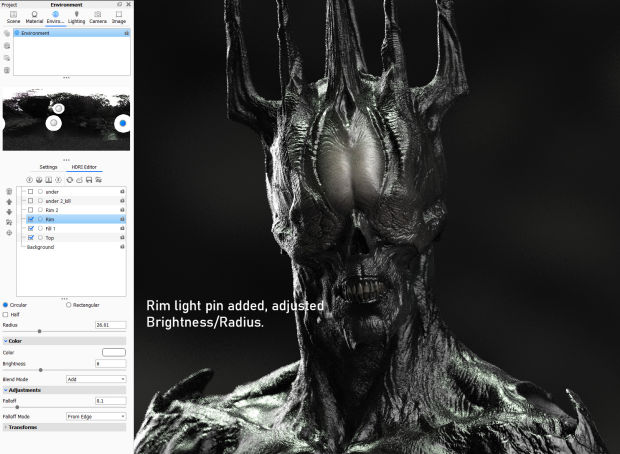 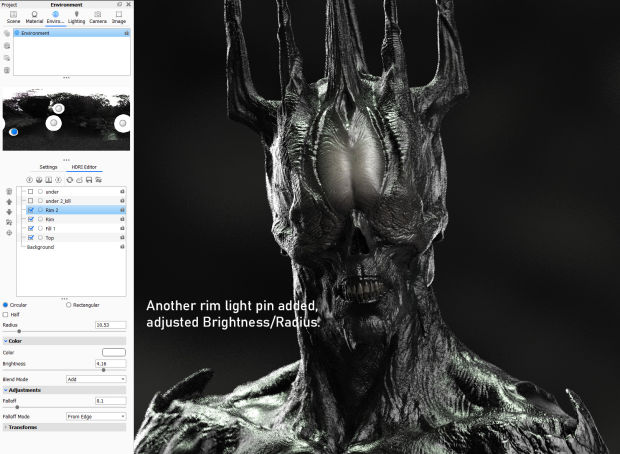 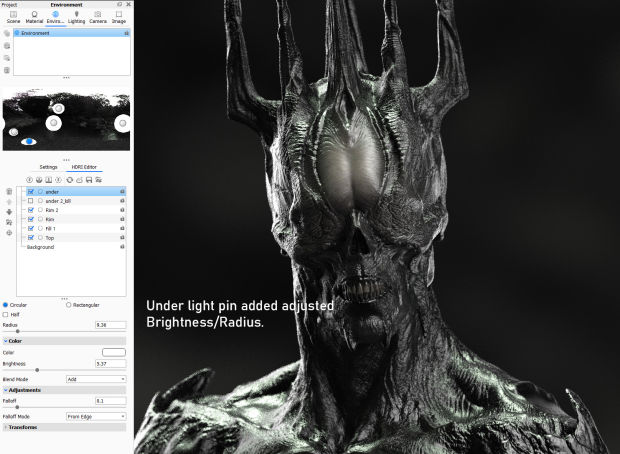 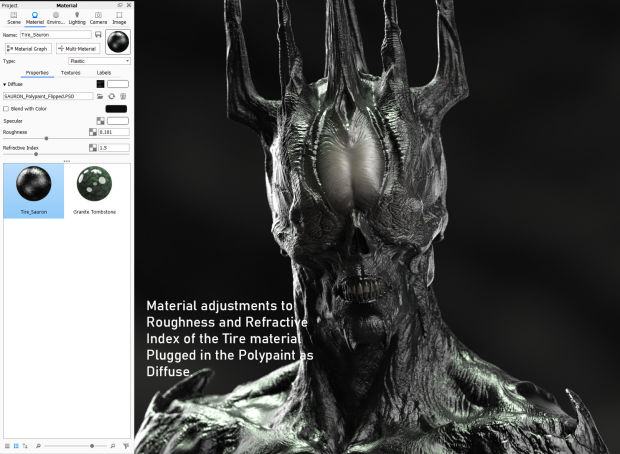 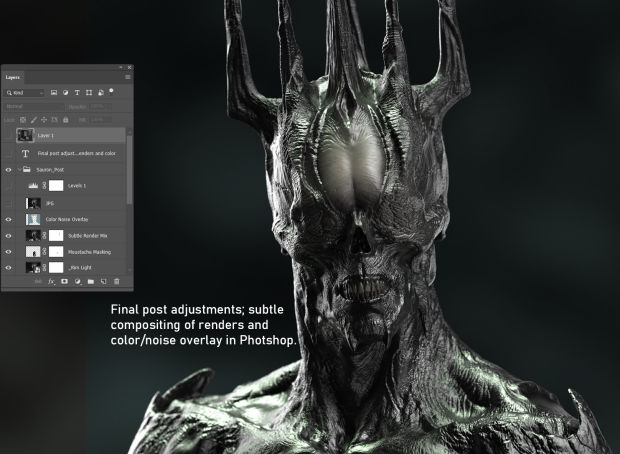