A little startup, founded by the former Naughty Dog technical director, is working on an AI solution to ease the life to big art teams.

This GDC through the grapevine we’ve learned that Andrew Maximov – Technical Art Director of Naughty Dog has left the studio, and since then frankly we were dying to learn what he’s been up to. Turns out he’s been busy. His talks on the changing workflow of environment art teams during GDC 2017 sparked a lot of conversations and this year he and his team announce Promethean AI, a solution that might change the way artists build virtual worlds. We caught up with Andrew in a Santa Monica coffee house on a warm summer afternoon.

Andrew Maximov: Do you know what lootboxes and crunch fundamentally have in common?

Andrew: They are both the result of video game development being a very low-margin business. While we generate a lot of money in absolute terms as far as return on investment a lot of productions are having a hard time justifying the effort.

Andrew: Yeah, not that long ago Dave Anfossi of Eidos Montreal shared that Shadow of the Tomb Raider will take about 75-100 million dollars to develop plus about 35 more for marketing. Which seems like a relatively modest marketing expense since it’s not uncommon for marketing departments to double the cost of development. But let’s say in their case they need to make 135 million dollars back just to break even. Now from licensing fees, to distribution and manufacturing, promotions and cost reduction it’s not uncommon for a publisher to get just under 20$ on average for every box sold. That would leave you having to sell 6.75 million copies just to break even. That is a huge amount and breaking even over 3-5 years of work is still a very bad business model. You can put that money into a venture fund and get 3-4x (if not 8x) back in 10 years with comparable if not reduced risk.

And it’s affecting both our talent and our audience. We have to inundate our users with things like loot boxes because if we don’t figure out a way to get higher returns than people with the money might as well take them elsewhere.

And while nobody ever wants anybody to crunch financially justifying compensating people hourly for overtime or extending development for any substantial period of time is in most cases borderline impossible, which personally breaks my heart.

We went from 40 million to almost 100 million this generation to produce a game. When you extrapolate that to next-gen a PS5 game at some point will cost 200+ million to produce. That is the VFX territory of getting an Oscar and shutting down the studio at the same time because you are not making any money. It is not sustainable.

Andrew: It’s obviously a very complicated problem with a lot of factors that will play into the solution. But one of them is definitely making the cost of game development substantially smaller. This is how we approach it.

Andrew pulled out his laptop, fired up a little tiny floating bar and Maya below it. He clicked a button on the bar and said (with his voice) “Promethean, build me a bedroom”. And Maya viewport came alive with a bunch of dancing bounding boxes highlighting and shuffling in turn until a few seconds later there it was – a layout of a bedroom.

From the looks of the rest of the short demo we’ve seen (sorry no images for you so far), Promethean AI-powered world-building solution, which can either generate entire environments or any particular composition of objects. At one point Andrew said ‘add a desk’ and a table appeared and placed itself in the environment with a chair, keyboard, mouse, monitor, books, pens, paper scraps – the whole lot just from that one command.

The demo showed only the layout but Andrew assured us that materials and lighting were in the works. It’s super fast, it could be integrated into any game tech. And support for major engines is already underway.

You can talk or you can type into an intelligent command line that gives you suggestions based on both what you are trying to build and what you already have in the scene. This AI analyses a lot of different data out there, making decisions of its own. It knows that bedrooms must definitely have a bed, a nightstand and a lamp. It knows how does the bedroom look if the hero is a teenager, or if the hero is an older man. It feels a bit like magic. And by the looks of it, it’s not really procedural math that stands behind it but the human touch.

Andrew: ‘Procedural’ is definitely a dirty word that we had to deconstruct for anyone we’ve demoed Promethean to. There is very little procedural about it. It’s trained and informed by real art built by real people. It learns from every individual person who works with it and caters it’s generation to their personal taste. There are no knobs, no code, no sliders, no numbers to tweak – you show it what you want, you train it and you correct it when it’s wrong so that it can do better in the future. It’s all about you – the Artist, and your artistic process is the input and the main mode of interaction. You don’t have to adapt to it, you don’t need to learn it – it’s 2018, your software can learn You.

As you might have guessed, the key question that we had was whether this AI can eventually replace artists altogether? Maximov believes, that Promethean is not a harmful job killer, but rather a new tool, which unlike the majority of programs in your pipeline, is based on celebrating artistic decisions rather than numbers and lists. With the core prototype of the environment done in a second, you’ll have the whole day for tweaking, art directing and figuring out the final look.

Andrew: “The main goal behind Promethean is to take the creative intent in your head and turn it into actionable 3d content without all the manual hassle. You have a creative solution in your head – you want to see it materialize as fast as possible. That’s what we do. We want to put your brain into a mech suit so that it can go much further much faster.

We are not looking to give you an environment that is 100% done to your taste out of the gate with 3 words of input – that is not our purpose. What we want to do is to take you 70% there as fast as possible so that you as an artist can experiment, iterate and make an informed decision on where your time is best spent.

Polish makes great games but being able to apply it everywhere it really counts is a luxury almost no developers have.” 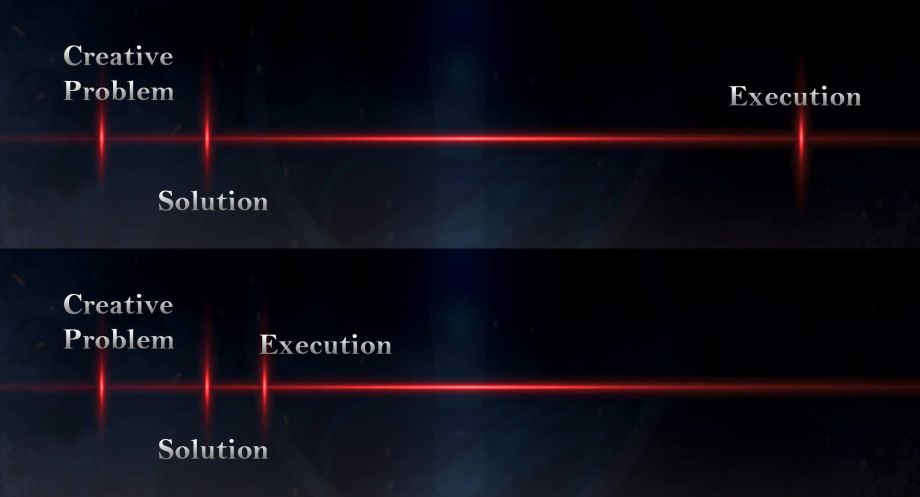 Andrew insists Promethean is there to look out for the artists:

Andrew: For most environment artists more than half of their time is spent on boring non-creative work every single day. We want to clear all of that out of your way. For example, no environment is made just once. It is constantly done and redone as design and technical constraint keep changing endlessly. Promethean can help! It does it’s best to analyze the creative intent behind any space and can automatically rearrange to new constraints preserving relationships between objects in the scene. That way you can build your space once, have Promethean take care of adapting to all the endless design iterations and once design is locked down – just do your final polish pass and you’re good to go. Oh and need to optimize or add more detail because of the changing technical constraints? Just tell Promethean exactly that – it understands.

Promethean is not capable of building 3d assets or coming up with it’s own vision. It is not the magical “make a game” button, but it’s definitely a nice change in the tool lineup that historically has been extremely technical.

Andrew: A very real fear I have right now is that someone will come along and tell us that “artists should just learn how to code” or “artists should be more technical because the future is ‘procedural’ ” and we will have to follow because there will be no better option. That in a very meaningful way will set us back for many years to come. Because every moment we have to spend learning complicated technology we are not learning composition, color, lighting, form, our subjects and our worlds. Art will suffer in some capacity and I am not ok with that.

We need effective tools for Artists that are made by artists and have Artistic Process front and center. That is was what we are committed to at Promethean, this is what we fight for every single day.

You can check out more info about Promethean over at the official website. The tech is currently traveling the world and is being shown behind closed doors. There’s a lot more under the hood, which we still haven’t seen (stuff like modern asset management and analysis solutions). We’re expecting to hear about new developments and first case studies pretty soon. Would be awesome to see the first AI-built game environments. Don’t forget to follow Promethean on Twitter.