Artist Sir carma shares his views about the advantages of voxels and talks about the accessible tools that let you work with this technology.

We’ve seen a lot of nice Pixel Art and some great 3D environments, now it’s time for voxels. Sir carma from Paris, recently published some amazing miniature dioramas created with voxels. An experienced voxel artist shared some of the insights about his work in an exclusive interview with 80.lv. 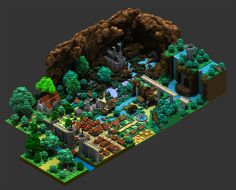 I’m a 12-year-old boy trapped in a 32-year-old body. I live in Paris but my actual job has nothing to do with video games and design. I work in a web agency. Ever since I got my NES when I was 6 years old, I always dreamed about making video games, but I felt I didn’t have what it took to work on one. I don’t know how to code and I’m not particularly good at drawing, but then I found a new medium that suited me – voxel art!

At first I got more and more into pixel art. Obviously, growing up in the 80s/90s, pixel art has everything that I love. All those influences from the 8-bit and 16-bit eras and all the PC point & click games from Lucas Arts were very dear to me. 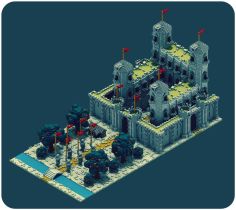 I tried doing a bit of pixel art but I found it really hard (it’s not as easy as people think it is). However, the idea was still very interesting. You can show a lot with very few pixels and this method also leaves a lot of room to your imagination compared to the extremely detailed games of today.

voxel art, indeed, is not as popular as pixel art, but there’s a nice little community going around. They are very nice people by the way. 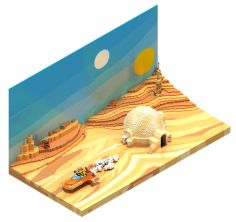 And voxel art is just pixel art in 3D to me, I find those two mediums super connected. I think it can get more popular. It just needs some fun and popular games made with it. Recently, Crossy Road shot through the roof. This game was made with voxels, and who can forget Minecraft?

I use Magica Voxel. I started with it 5 months ago and feel like I have really mastered the tool. I saw a Tweet of voxel art image made on Magica Voxel from Ephtracy. That was when I just finished Monument Valley, which I loved. I had to try that tool and fell in love with it right away. 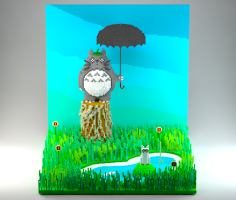 It’s very similar to modeling with pixels. I always loved the feeling of sculpting (clay or Zbrush). It was like having legos in my computer. Infinite legos that I could shape how I want.

There’s also Qubicle which seems far more advanced in terms of functionality and options, but I prefer the feeling of Magica Voxel. 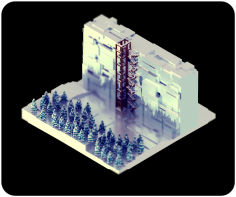 I do everything in Magica but it’s limited to 126x126x126 scenes. That’s why I cheat a bit. I do different scenes and then glue them with Photoshop. I just have to render them with the same camera position and lighting configuration. I always render with the isometric camera instead of the perspective one. I love that old isometric style of old RPGs like Final Fantasy Tactics.

Tips and Tricks of Working with Voxels

I just started 5 months ago, but I would say that scale is the most important thing. Since everything is so small and you’re working with tiny cubes, you have to be careful about the size of your different assets. To me it’s important not to be too detailed for each asset. I mean, the general scene can be very detailed, but still stays small. For example, in my Dragon Ball scene, Goku’s hair is made of like 5 or 6 cubes!

To me, the best voxel art is when it stays simple. For example, I love what my friend Gordon Zuchhold did on his little game Last Case.

The second hardest part for me is painting. Since it’s not flat and you don’t have textures, it’s really tough. My friend Marco is a master at this.

He manages to make it organic just with his painting. Magica Voxel allows you to paint voxels with a few brushes. I think Qubicle isn’t very good at this, but I might be wrong.

The great thing about Magica Voxel is that you don’t need to be an artist to have fun with it.

I think voxels have a bad reputation from those old games like Delta Force in the late 90s. Those were pretty terrible. You shouldn’t try to make realistic stuff with voxel engines. In my opinion, voxels should stay unrealistic, since they are by definition very simple. Minecraft, Crossy Road, and to some extent Monument Valley or Fez (I’m not sure they are in voxels, but you could do them in voxels for sure), show how to use cubes in an efficient way.

The main advantage of voxels (remember that I’m not a technical person at all when it comes to games) is that they require less resources than regular 3D games. I think it’s a nice fit for mobile games like Crossy Road.
It’s also a nice technology for procedural games, but I don’t know for sure.

I’m doing voxel art in my free time after work and during weekends for fun and pleasure. I like starting a scene without having any precise direction.

But I still have that dream from childhood of making a game. Several people approached me, but it wasn’t very serious unfortunately. I’m doing a test with some guys, trying to help them on the graphical part of their game, but I can’t say more right now!