Aaron Sims and Tyler Winther from Aaron Sims Creative talked about their approach to a cinematic underwater environment made in UE4 with the help of scanned data. The project is part of their upcoming film DIVE.

First, make sure to check out our podcast with the team to learn more about their projects.

I am the founder and CEO of Aaron Sims Creative. We are a premier design-focused VFX studio and have worked on projects like the Planet of the Apes trilogy, Wonder Woman, and designing of the famous Demogorgon for Stranger Things. I have been in the industry since the ’80s, doing makeup effects and bringing monsters to life in classic films like Evil Dead II, From Beyond, and Fright Night… fun stuff like that! I then transitioned into visual effects in the ’90s, working for industry giants Rick Baker and Stan Winston before eventually forming my own company, ASC, in 2005. Most recently, we’ve launched our own slate of exciting IP projects and begun pre-production on an original feature film, DIVE. As a company, we consider Unreal Engine to be the ultimate tool for the modern storyteller and the next great leap in creative technology.

I run the original development at ASC. My primary job is to help generate original IP and bring the right people together to make it a reality and bring it market. I’ve contributed to the creation of a slate of original narrative art books and feature films. Our first narrative art book, TANK, will hit shelves in early 2021 and our feature film, DIVE, is scheduled to begin shooting in early 2021. Prior to ASC, I help positions in Lit Management at Management 360, Creative Development at Sony, Universal, and Regency Enterprises. I got into 3D shortly after working for ASC. I was amazed at the creative possibilities photo-real / real-time 3D offers and haven’t looked back. I went so far as to do my first PC build during the quarantine. 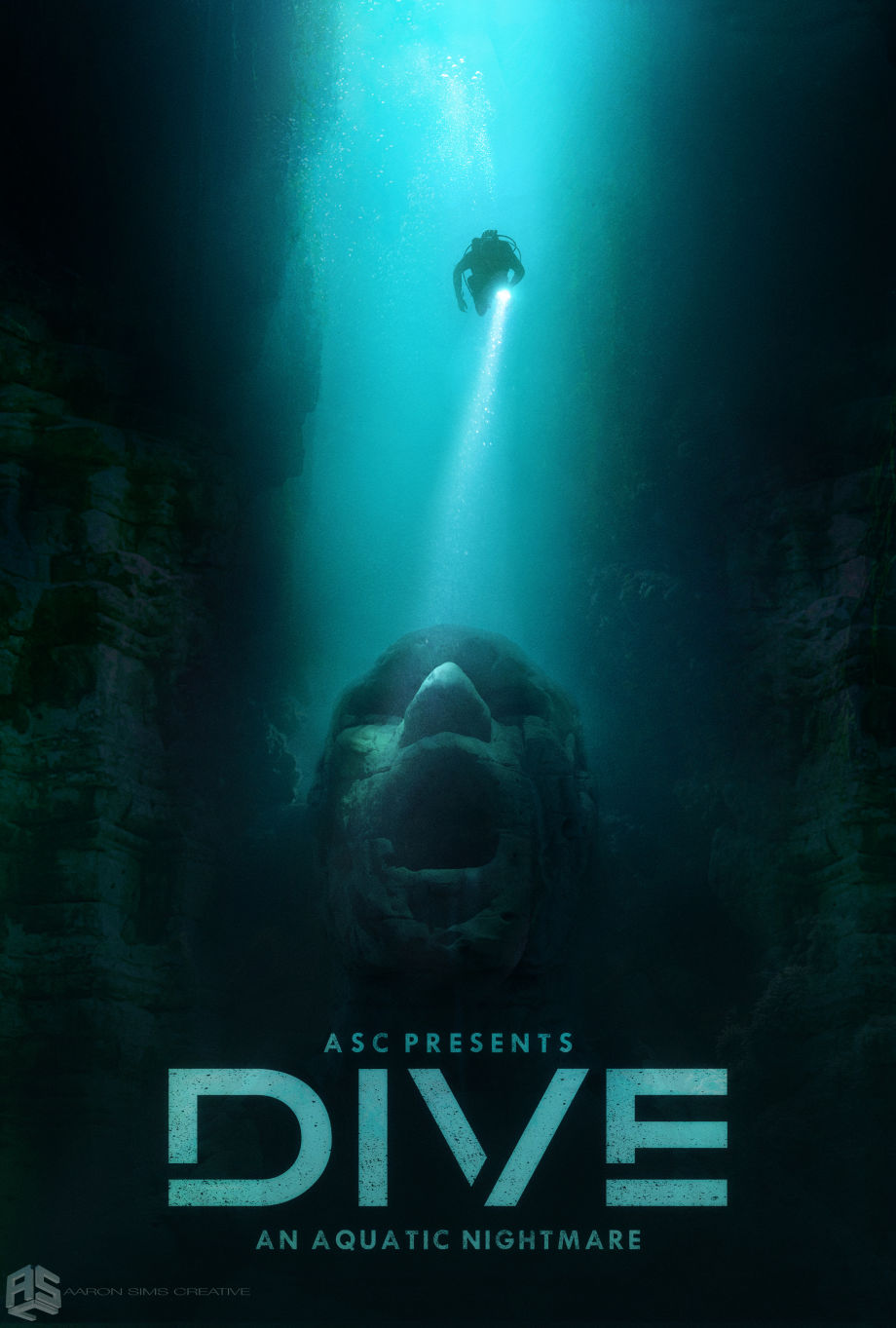 Real-Time Underwater Caves in Unreal: About the Project

The underwater caves project is an original feature film we’re making called DIVE. It started from being awestruck by cave diving imagery and also horrified at the thought of a diving trek going terribly wrong. From there we started developing the project into a movie we wanted to make that would push boundaries, make a strong impression, and thrill audiences around the world.

The overall goal was to do our take on a survival thriller set in a rich environment with a great Creature. Soon after adopting Unreal as our main visualization tool, our technical goal became to see if we could deliver final pixels primarily, if not entirely, in Unreal Engine.

To accomplish this, we’ve leaned on as many available resources we can (scanned data, mocap, marketplace assets) but much of what we’re doing is custom and on the edge of current capabilities. Despite working in linear media, like any dev, we find ourselves laying track ahead of the moving train every day. Fortunately, we have Epic Games supporting our efforts and the game dev community at large actively helping us find and innovate solutions at every turn.

All of the caves are based on scanned data that we used and modified. We weren’t able to find Megascans of any real, true caves, but were able to use some great rock and landscape assets. Additionally, we did a lot of investigating to determine what available scanned data did exist for caves, ultimately leading to a few resources that provided accurate scans of genuine caves, including stalactites and stalagmites. Of course, those are just pieces of the puzzle that we then had to creatively put together and make work. That’s the general principle behind the direction we’re going in, implementing a bit of creative build in the process. We’ve found that with the elements you want to feel most familiar with, there’s no reason to build from scratch what you can get scanned. After all, there’s nothing that will look more real than scanned data. The great thing about Unreal is the ability to take this information and with its ray tracing and lighting capability, really represent what feels like a true environment – which is obviously what we’re trying to achieve.

When it comes to creating water, we revert again to studying existing footage, examining the properties of water, and detailing how elements interact with it. In particular, we placed divers into the environment and explored everything from how light would be affected to how thick the floating debris around them would be. We then match this with the particles and fog effects inside Unreal to create realistic qualities, like water density for example.

When creating the surface of the water, we started with water shaders that are already in engine and then introduced some really cool shaders that other artists had done, combining and tweaking as necessary. Again, the trick is always to refer back to real-world references and try to match those. Because there are so many factors to consider, water is, without a doubt, one of the hardest things to make look realistic. For example, the distortion of the waves requires constant augmentation to look right, then there are other factors like reflection and refraction, color, and opacity. All of these pieces take time to get just right, and most of the time only work for that particular shot and at particular angles. Don’t just rely on what is in engine, do the research and build a catalog of reference material. Then you can take advantage of the tools Unreal has, like ray tracing, which is implemented quite well and a must for lighting.

The caustics are moving textures attached to the light that is then placed around the scene to give the illusion of light passing through water. In this case, the water is distorting the focus of the light as it is reflected, refracted, and bouncing off the cave walls. Unreal allows you to make your own textures for light to achieve a plethora of cool effects like this. The refraction we see when looking down through the water or looking up toward the surface is a fairly easy effect, modifying the plane that the water shader is on.

Can It Be Used in Games?

Most of the water we’ve created so far could be used in games, no problem. As we move forward in our own research and development, the need to really push the water and its interaction with other elements may pose greater challenges for games. Stay tuned.

Although Unreal is amazing in many ways, water remains very tough to achieve in real-time, especially when considering all the dynamics of the surface. Specifically, the splashing of water – on a character, for example, – and the way the water reacts to itself are the most challenging feats. We would love to see improvements in these regards.

What Aspects Are Especially Challenging?

It all depends, as every situation comes with its own set of challenges. We would say that the dynamics of the surface is the hardest. Remember though, there are many cheats you can exploit to achieve almost anything. It really does come down to having a clear vision and knowing where you want to go. Again, this brings us back to the importance of research and having real-world reference you can aim to match. Keep tweaking and working at it. Eventually, you won’t be able to tell what’s real and what’s Unreal!

Do you want to learn more about Aaron Sims Creative? Join us in 80 Level Round Table #8 episode where Aaron and Tyler told us more about their company, projects, and experience with UE4.