Dmitry Kremiansky talked about his picturesque 3D landscapes inspired by classical paintings and shared some useful ideas about lighting.

Dmitry Kremiansky talked about his picturesque 3D landscapes inspired by classical paintings and shared some useful ideas about lighting. 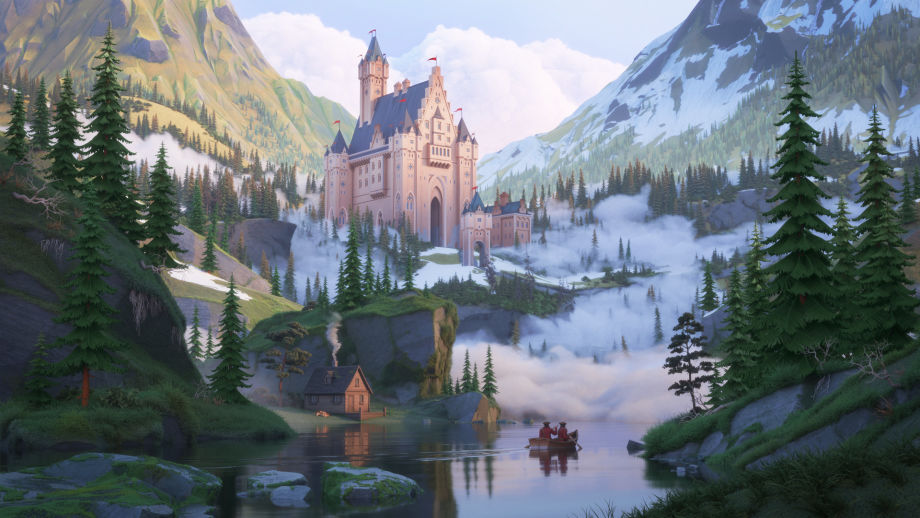 80lv: Could you introduce yourself to us? Where do you come from, where did you study? How did you get into art and 3d art in particular?

My name is Dmitry Kremiansky. At the moment I am staying in Glasgow, UK, but I studied in Israel, at a place called IAC. I was always drawn to drawing (pun!) since a young age, and after a friend of my family gave me oil paints as a gift I started to take it more seriously and was attempting to recreate classical paintings of Shishkin, Canaletto, Meyerheim. Around the same age (14-ish) I also discovered the wonderful world of video games. Because I wasn’t amazing in painting, and I was spending a lot of time gaming. It was a matter of time until I found something that combined both but it did take me a few years. I wasn’t really into animation – I watched almost zero Disney/Pixar movies by that time, but I was in love with video game cinematic trailers, especially the ones from Assassins Creed 2 and Brotherhood, and after finding out I could actually do something like that for a living I signed up for studies immediately. 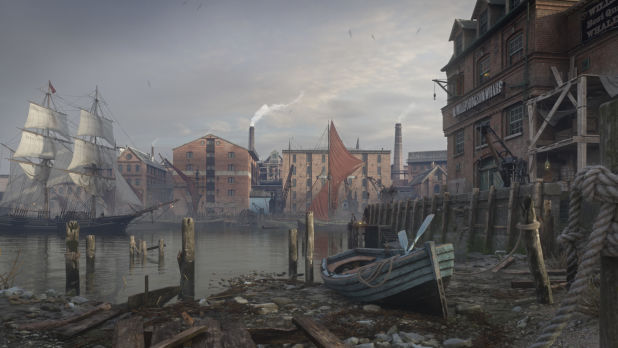 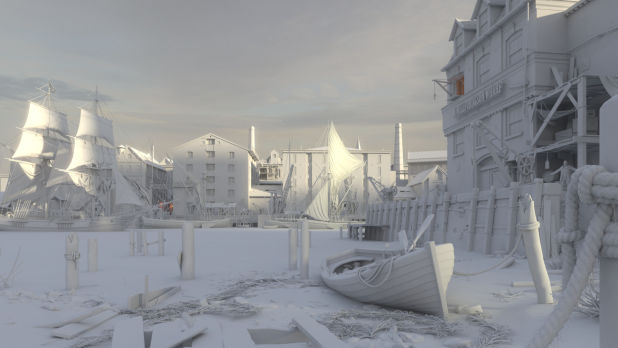 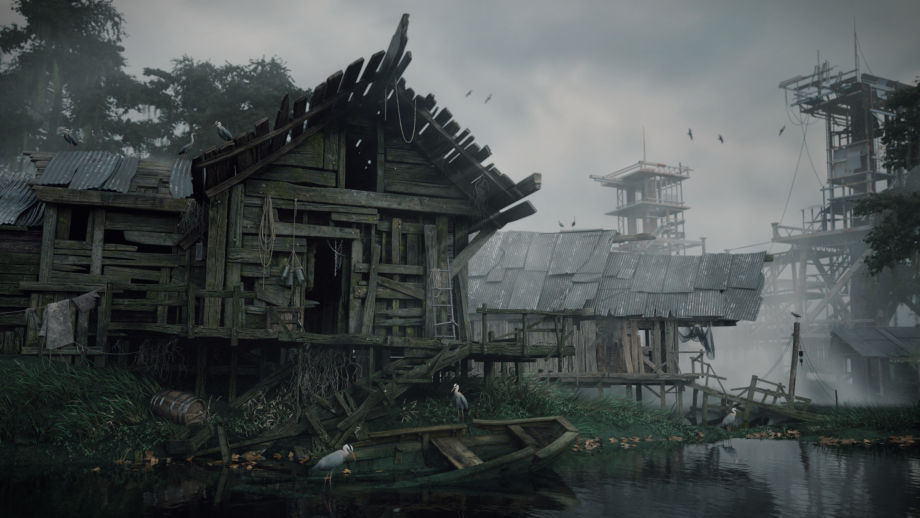 3D Landscapes with a Touch of Oil

80lv: Your amazing series of 3D landscapes look not just 2D but remind of classical paintings from a museum somewhere in Amsterdam. Was it a conscious choice to experiment in this direction or is it the way you usually do your work?

I guess my love of classical paintings is driving me in that direction whether I want it or not but I do tend to use a lot of classical paintings as a reference. Also when creating something that didn’t necessarily have colorful photos of it at the time is a great chance to explore paintings of the era- if they exist of course. I guess you can always find props and even entire locations that are preserved, but it’s always nice to see those things in the way people that lived back then did. 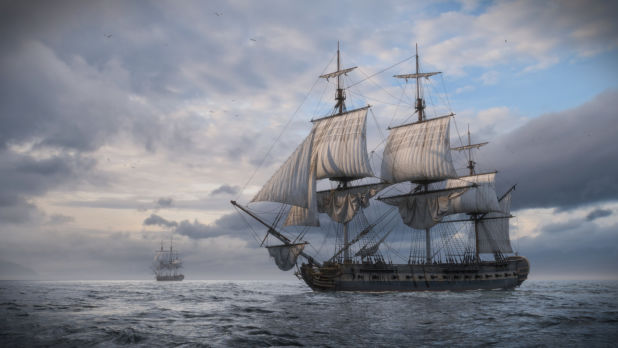 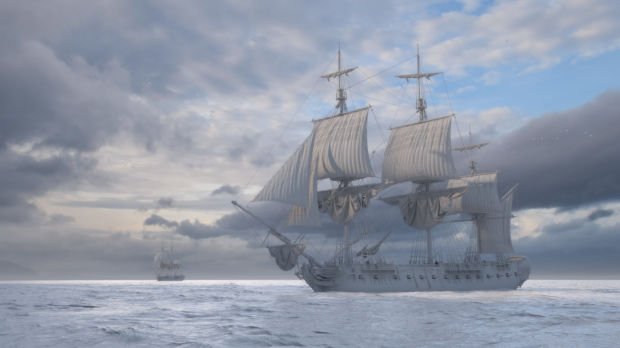 80lv: Your projects usually start with a very basic 3D block out, where you later add the details. It seemed to be something that you’d do in Photoshop with photo bashing. Why do you use 3D here? What advantages do you personally find in this particular approach?

Well, this technique you’re describing is called matte painting and it’s a completely different approach. While both achieve their goal, and arguably you could say matte panting tends to produce more realistic results when done right because it’s using “captured real world” mashed together rather than “attempt to recreate real world”. However, it also has more limits, and more “cheating” in a way. You generally cannot do challenging camera shots, and up close you can see that it’s a flat photo and not 3-dimensional object with material properties that react to light. However, when both techniques are combined wisely, you get to see amazing and completely believable shots.

A Secret Place Somewhere in the Alps

80lv: You are utilizing World Machine a lot. Could you talk a bit about the way you were crafting the Alps landscape and what way you built the larger mountain pieces with different types of erosion and the smaller rocks in the foreground? These look really picturesque. We’re wondering if they were actually modeled or generated.

Because this is a stylized project, I didn’t get to unleash the true potential in World Machine here. I generated the mountains, then used them as a base in ZBrush, so basically 5 minutes in World Machine, and then a few hours in ZBrush using the good old trim brushes.

80lv: Could you tell us a little bit about the way you’ve been playing with the trees and grass?

I created the firs and the pines in SpeedTree, and it was a pretty straight forward process for me. I made a few variations and just used Mash to scatter them. They have some nice gradient applied to them, and the magic happens in comp, I guess. I just cranked up the color of the shadows on them, so they look translucent.

80lv: What do you use Houdini for here? Does it help with the fog or some other part of the scene?

I used it for the clouds and the fog, there are nice tutorials on Entagma’s Vimeo channel of how to make clouds out of geometry.

80lv: How did you make the snow on the hillside?

It was just a white color with 90-ish percent roughness applied with a mask in Substance Painter.

80lv: You’ve played with the lighting quite a lot using different setups. Could you tell us a bit about this process and how you usually prefer to light the massive scenes? We’re sure a lot of people might find this challenging. 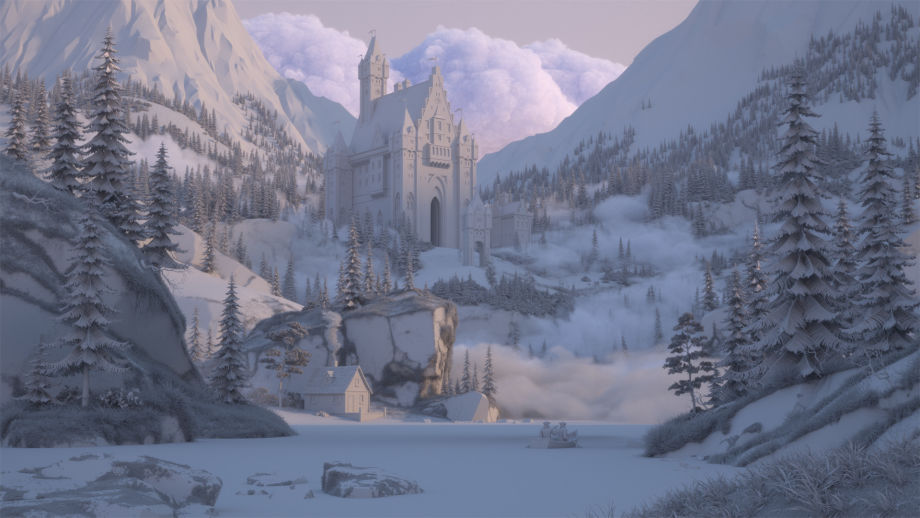 The fun thing is that in spite of the different comps in the gif and different color corrections being shown, the lighting itself actually didn’t change since day 1. The only change was shifting the hue to something more pinkish and adding two lights to shine at the tops of the trees, which I could’ve probably achieved by moving the geometry that strategically blocked the sun a bit. But this way I had more control.

To me, setting the keylight is usually a point where I understand the volumes, the distances between objects, and how they cast shadows on each other. This is why I usually have a locked camera and a locked keylight, the rest comes after. Having the camera locked is important because then the effort goes mainly into areas you see. The only difference between a still frame and a shot is the amount of what you see, although if you’re smart you can do an amazing shot without putting any additional effort to what you’ve done for the first frame.

As for the lighting, it is important to test the lighting with grayscale proxy, but then it’s also important to have the shaders correspond properly to lighting per shot, so logically to me, 70 percent of the lighting is being done before I even have an idea how I will model the scene. Also, it’s a motivational boost when you look at some gray boxes combined with nice light and shadows starting to happen, and you say to yourself “nailed it”. Of course, by the time I finish modeling everything, there will be tweaks, but they are usually minor.

One last thing about lighting: less is more. The more lights you have, the more the scene starts to fall apart and look artificial.

80lv: What was the post-effects’ role in this scene? What did you need to enhance with shaders or some other tools?

The whole thing was made more saturated and some color adjustments were applied to the image based on the ZDepth. I am trying, however, to make the shaders work as much as I can in the beauty render. The only shader I did tweak was the “needles” on the firs because of the way they were modeled. I didn’t want to use any translucent material, so I just color-corrected the shadows on them.

80lv: Overall, what were the biggest challenges here? How did you overcome them?

I think, the biggest challenge for me was the style, because I am tending to make things look quite realistic, so I forced myself to go in the opposite direction. However, there were quite a lot of answers in the concept, (Quentin Regnes has lots of amazing works, check out his portfolio!), and the only questions I needed answering were the ones that appeared due to not following the concept literally and trying to introduce some different style into the scene. Sometimes I was lucky to establish some things quickly, other times I showed the result to my co-workers and people I know and asked what they thought. As a result, I did get a lot of great ideas and inspiration from them.

Thank you very much for the interview. I am planning to have a very productive year, with new exciting things, and I wish the same to everyone else! Thank you, 80 Level!