You might have heard of Xavier Coelho-Kostolny. He’s an amazing character artist, wonderful designer and great mentor (check out his Patreon). A couple of days ago, Xavier did an epic thread on Twitter, starting to compare the art direction of two of the most successful shooters in the world Team Fortress 2 and Overwatch. It’s amazing and we give a little transcript here, so you could read it in full. But do yourself a favor and subscribe to Xavier.

Let’s talk about art direction in Team Fortress 2 and Overwatch. This is just going to be regarding vanilla TF2, mind you. No hats and goofy costumes.

So what makes TF2 good? Easy. It’s consistent through and through. Take a look at this comparison image of TF2 heads and think about what you see. 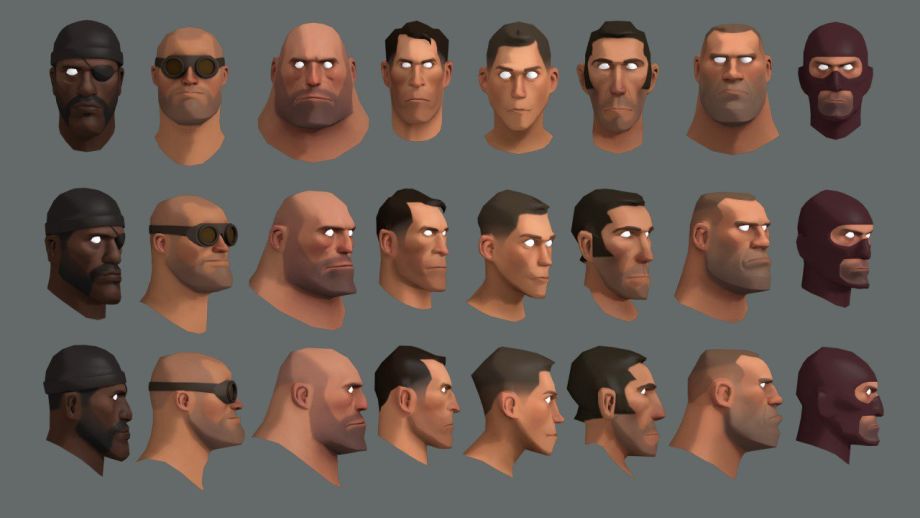 Really break down these heads, and you’ll find a ton of little nuances that keep everything within a consistent style.

For example, compare the angles of every nose to every forehead. With only minor tweaks/variations, the angles always match. With small choices like nose-forehead angle consistency, the artists build a consistent style which they can easily replicate. Similarly, look at the color palette. 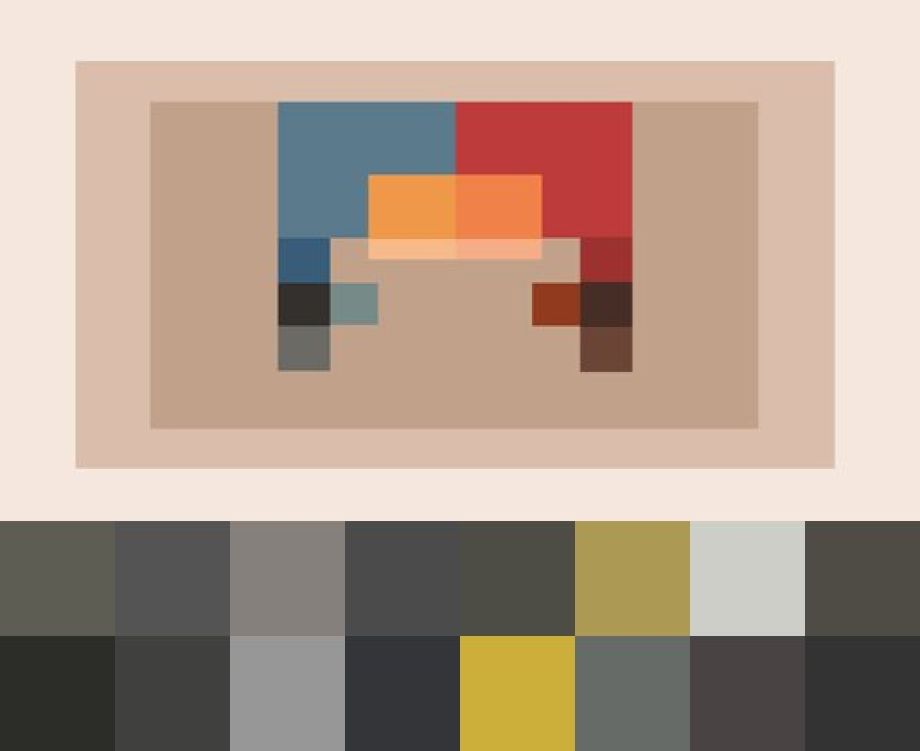 With this tightly restricted palette, the artists build patterns and variation while maintaining strict control to keep consistency. These colors stretch not just across characters and weapons, but across the environment as well. 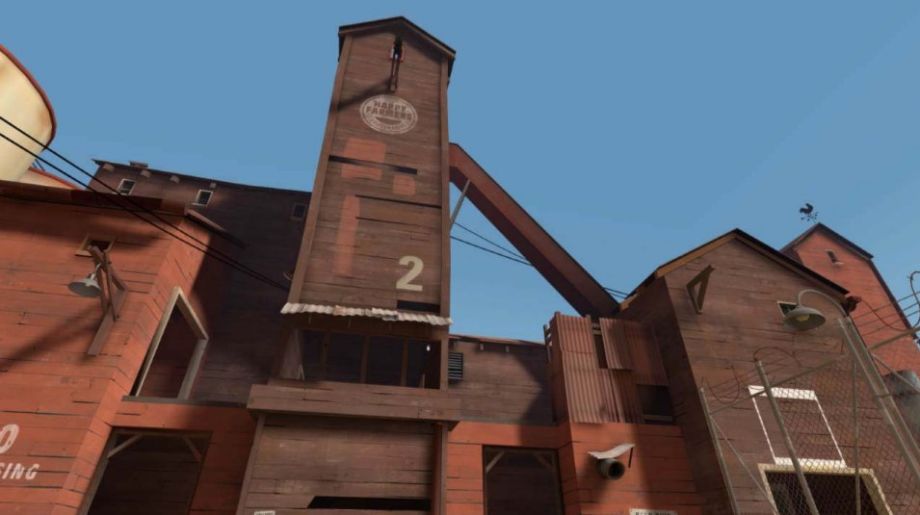 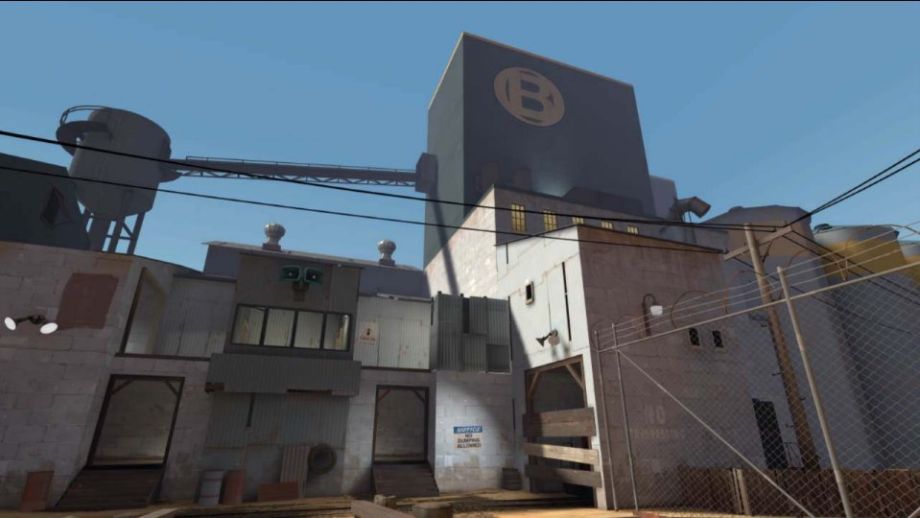 Limiting the palette forces the artists to use shape language and materials to define different areas of the map. As a direct result, the two teams end up having distinct identities despite being functionally identical. Additionally, this identity makes gameplay more fluid by ensuring players always know where they are by distinct landmarks. This environmental design also pulls double duty by accentuating the identities of each team member.

If we look at this early screenshot, we can easily determine who is on which team at a glance. 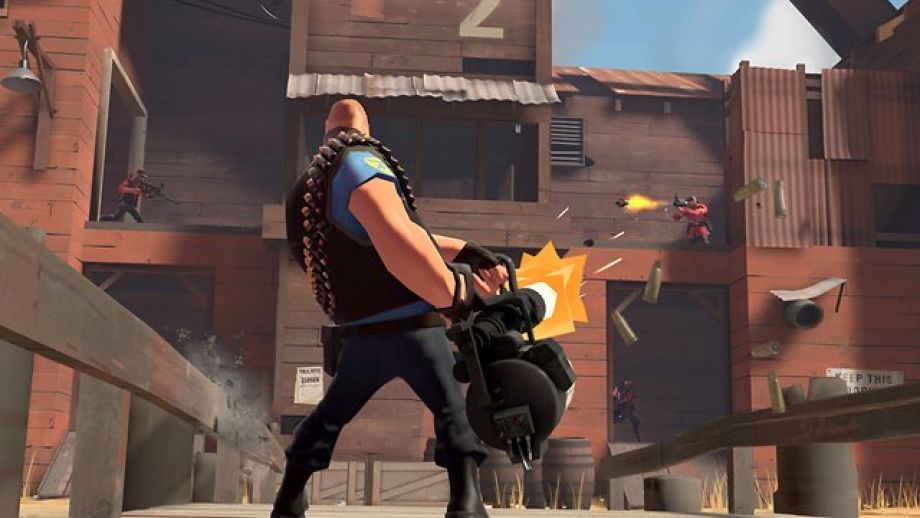 The cool tones of the Heavy in the foreground contrast with the colors of the red base and the red team members. Instantly readable. This means you’re always going to know when the dude in your base is on your team or the enemy team. Their colors ALWAYS contrast. The shape language example from earlier also plays into character design by making silhouettes recognizable, even partially obscured. With distinct character silhouettes, you get instant readability. Take the heavy, for example. Even mostly cut off, still recognizable. 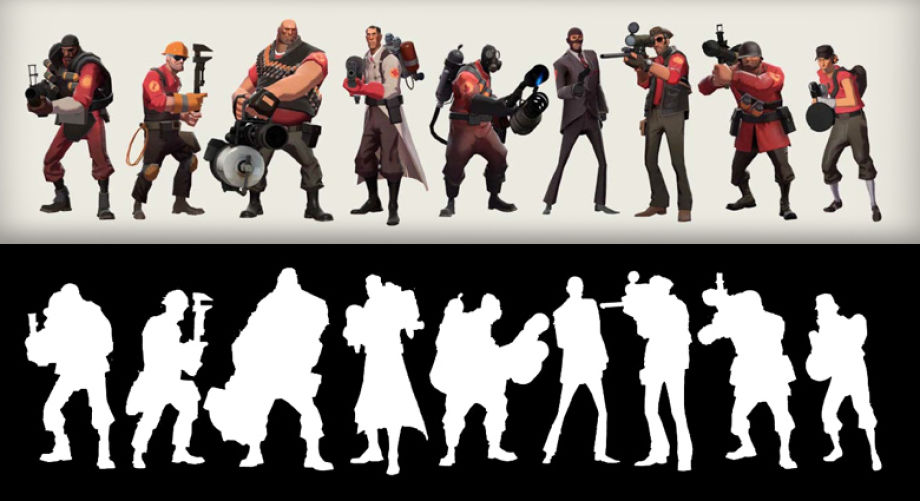 Now, with those things in mind, let’s look at some stuff from Overwatch.

What does Overwatch do well? Material reads, silhouettes, character recognizability. Even with different skins, they’re distinct. 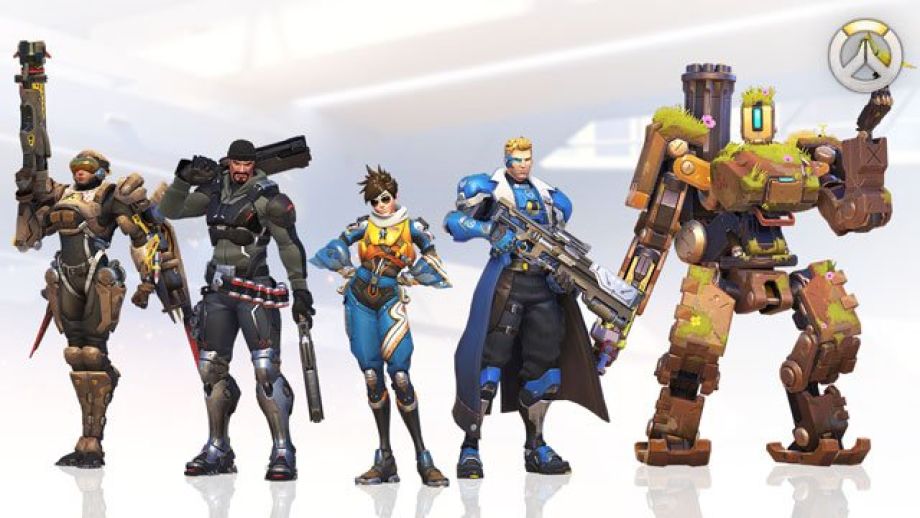 However, we quickly run into problems! For example, which team are these characters on? 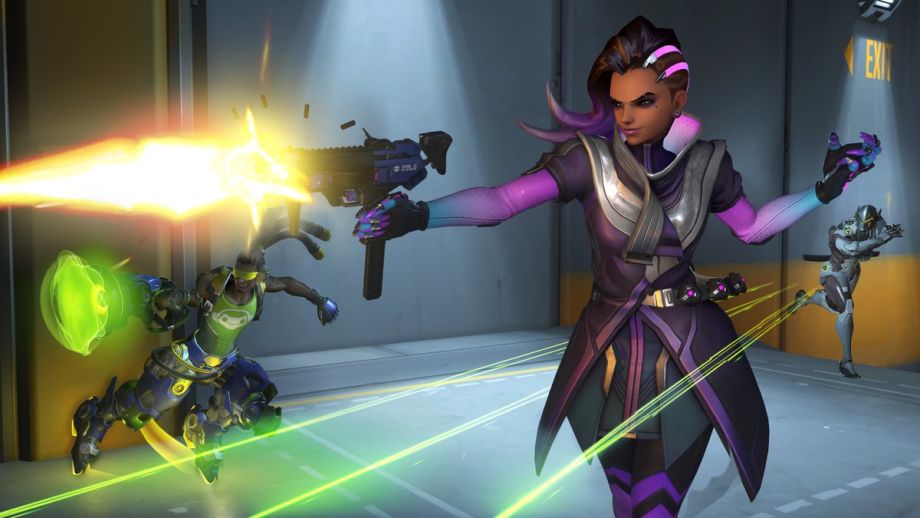 Is Genji throwing stuff at Sombra because he’s on a different team, or is he throwing PAST her?

By contrast, what happens if we shift some colors? Suddenly we get a better understanding of what’s happening in the image. 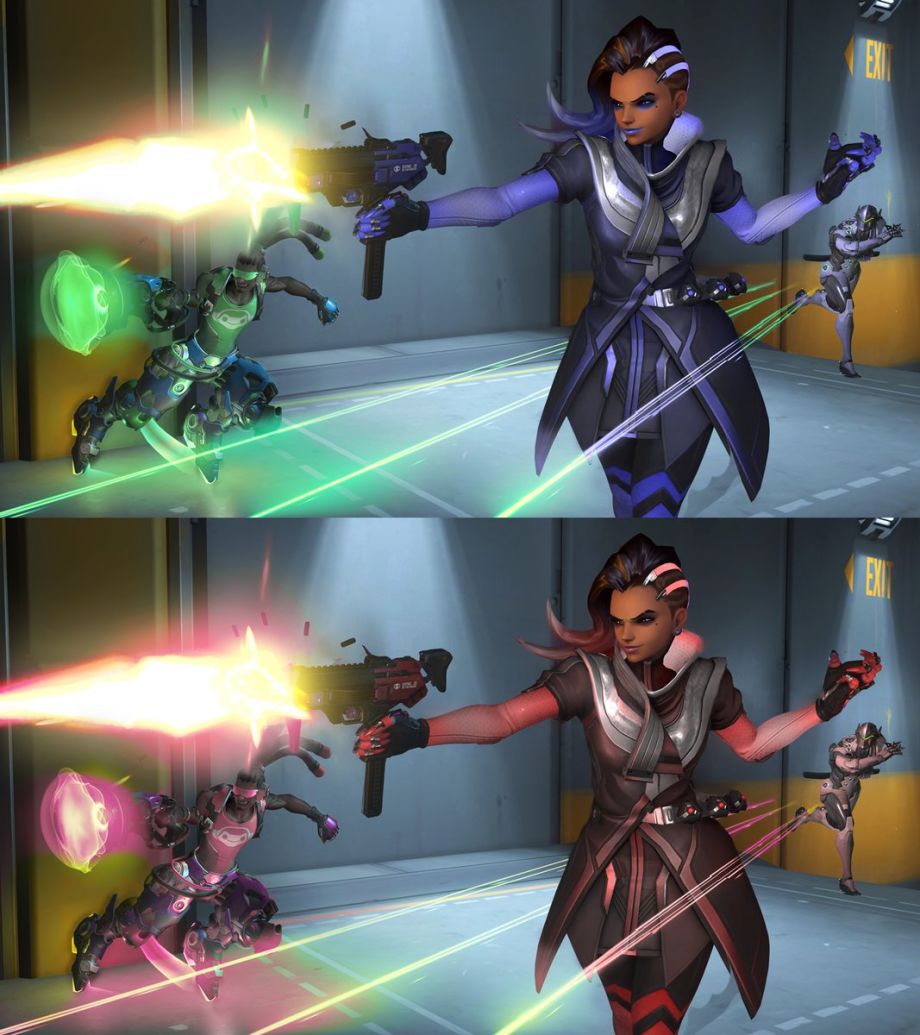 This same principle seems to apply to most screenshots, marketing or no. Even with good silhouettes, team readability is tough. 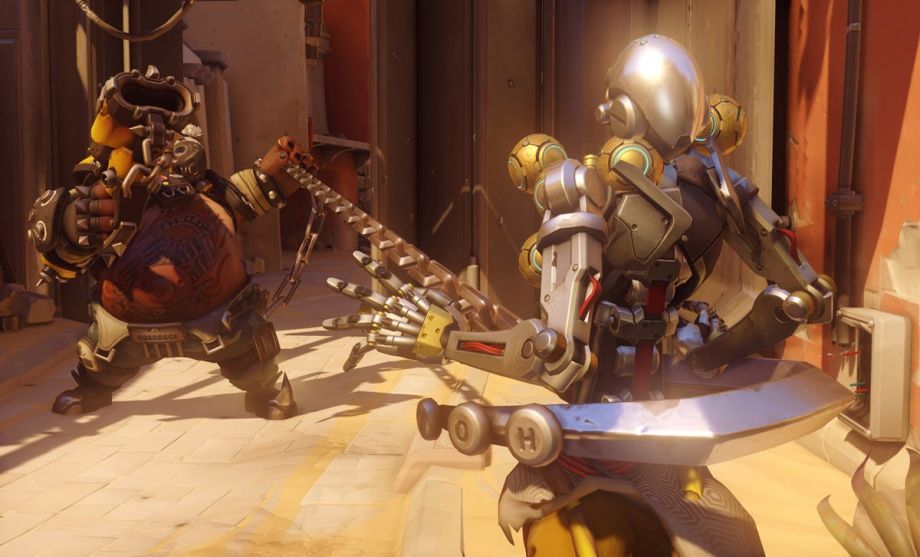 Part of the problem stems from not having distinct teams, despite OW’s built in fiction of Overwatch vs… everybody else. Considering the roots of Overwatch’s style AND gameplay, it’s odd to me that things as simple as team colors are not standard.

But wait! Overwatch HAS team colors! 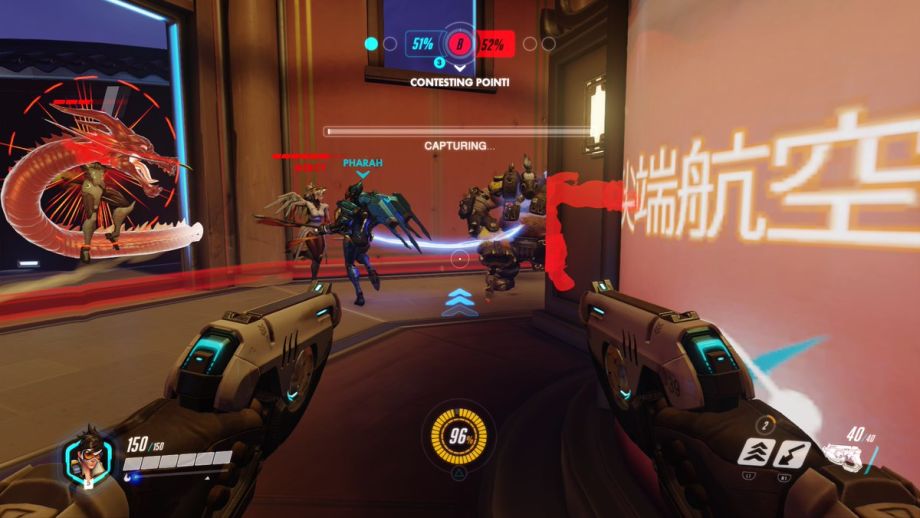 Does it though? What happens when we switch the HUD colors? Which team is Pharah on now? 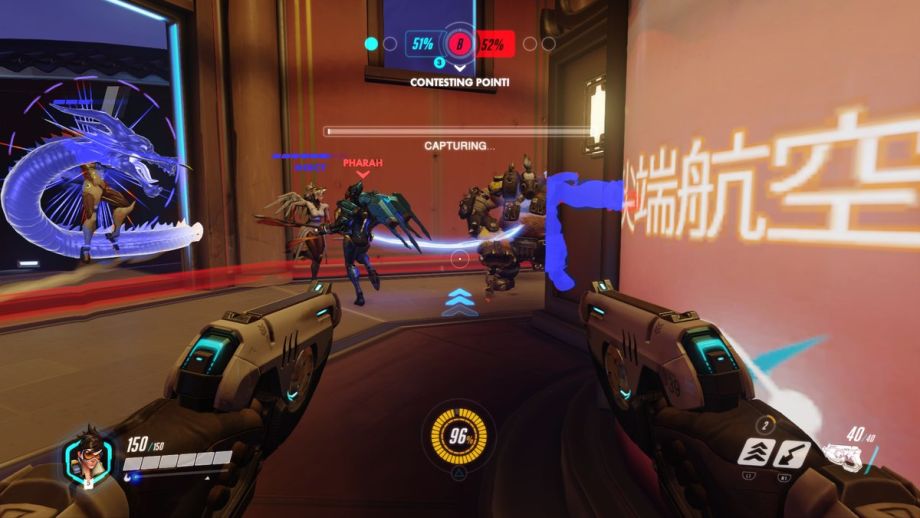 This highlights a fundamental principle of team-based games. Specifically, who’s on your team and who’s not.

In this case, Overwatch’s main theme— two teams battling for control of a map — becomes muddled. Despite the fact that these characters are all instantly recognizable by their silhouettes, they become unreadable next to each other. 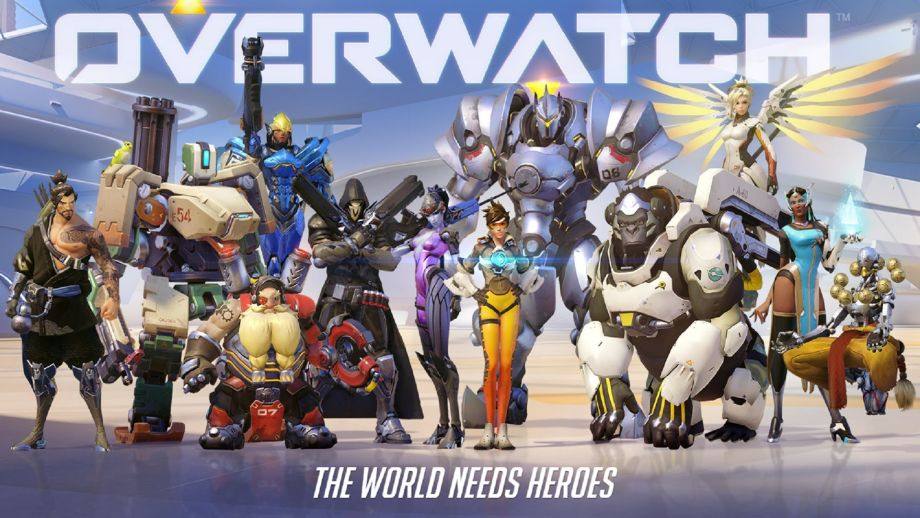 Contrast the above with the almost exact same image from TF2. 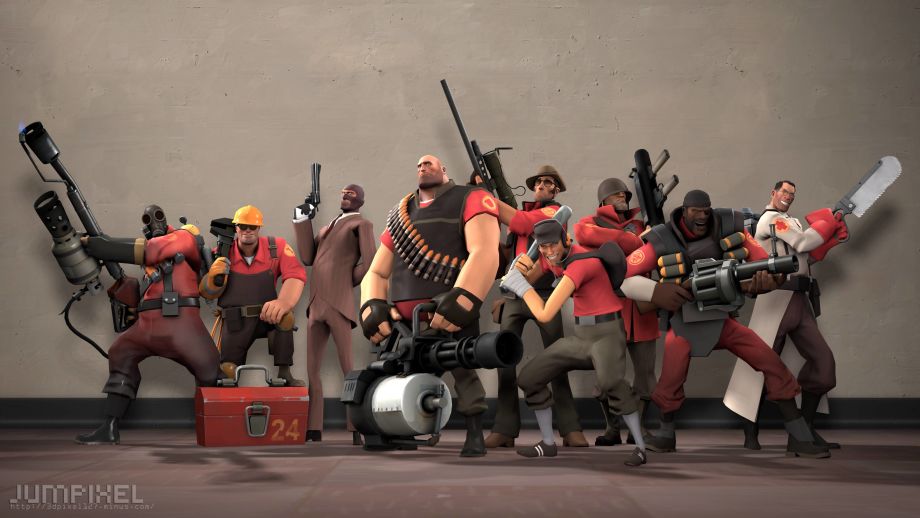 Even with an extremely limited palette, TF2 designs remain distinct. Why?

The cause is twofold: 1. TF2 designs have larger areas of visual rest. 2. TF2 characters have a much stricter value hierarchy.

This value hierarchy shows itself in the use of illustrative rendering and by specifically painting color gradients into characters.

While the Overwatch designs are clean, they rarely show this value hierarchy, and thus become difficult to read.

Additionally, many of these characters have areas of visual noise that do not read well at a distance. 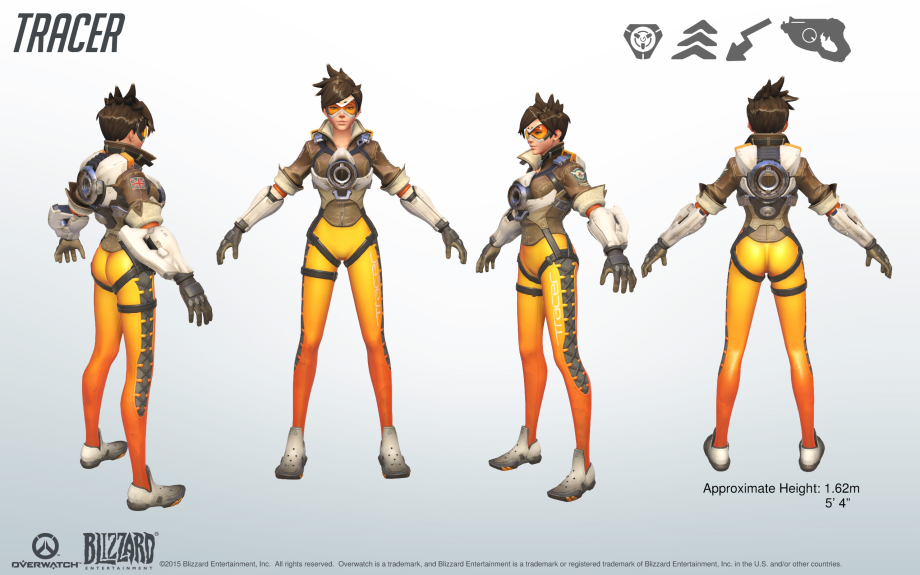 However, there is one standout character in Overwatch that bucks this trend directly. Like it or not, she’s also the face of Overwatch. While I’m not a huge fan, Tracer is the strongest character design in the game by leaps and bounds. She’s the strongest because, out of all the characters in that group shot, she’s the only one with a readable silhouette.

This brings us back to value hierarchy. It brings us to the understanding that her bright yellow tights highlight her function: She’s fast as fuck, and her design accentuates that in every way. Her legs are impossibly long, and her design is sleek. And the thing that makes her design readable is the huge splash of color with a single gradient going across it.

This is something every other character lacks, to some degree, and the main reason they don’t read well.

So, to tighten the visuals of Overwatch and make the characters function better in gameplay, they all need to take a lesson from Tracer.

Eliminate the small details, or bring their values closer together. Use those huge splashes of color to differentiate characters.

Introduce team colors and eliminate colored nametags and visuals will be cleaner.

And consider giving more visual identity to different areas of maps to accentuate when you’re in the wrong neighborhood.

And there you have it. Xavier has some very interesting points. Don’t get us wrong, Overwatch is a great looking game, but some things still work better in TF2. Also, if you have the Orange Box, make sure to launch TF2 with some developer commentaries. It’s super interesting and it talk about characters as well.

Xavier I totally agree on your points and see where you are coming from. However, taking marketing shots to make your point was a weak decision. Overwatch never has the problem of not knowing who your enemy is, because they use pretty simple readable post effects on the characters. You still instantly know who is who, what there function is and on which side there on.

One could argue that some of the Ult colors are odd choices (using red for your teams raging Winston might not be the easiest to read at first glance). The recolorings are ugly to say the least, bland monochrome designs and in that regard, yes TF2 does work better and look better on a Red vs. Blue Level. That said, Halo does what you argue for, they color the teams entirely in one color. Making them blue and red blobs ultimately, so you instantly know who is who. However, i think it is a weird decision considering how much work goes into the design and execution of those skins.

A system like in Overwatch would work a ton better visually (to me) while not destroying the readability. #TLDR i agree, gameplay first. But it can be achieved by more measures than just coloring the textures of a certain character.