Hi! My name is Florian Elie, I am 25 years old and I am currently living in Bordeaux. I graduated from Brassart Caen in 2016 and started to work in a graphic design agency as a graphic designer. I moved to the video game industry one year later joining Aslak Studio (mainly virtual reality) as a 3D generalist. After that, I worked for Tap4Fun Paris Studio in 2019 where I did some buildings and environments for the mobile game Age of Apes and now, I’m working at Shiro Games. I love creating environments, worlds, and moods step by step so I think it comes to me more naturally than characters. 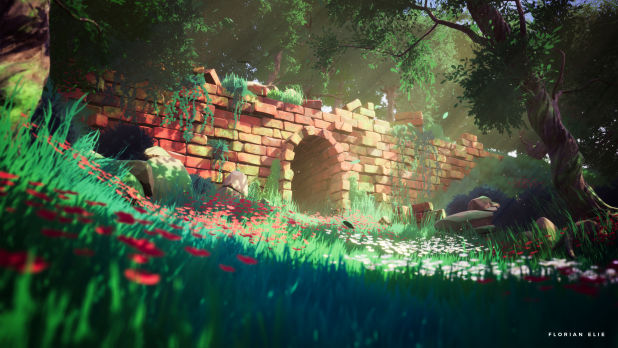 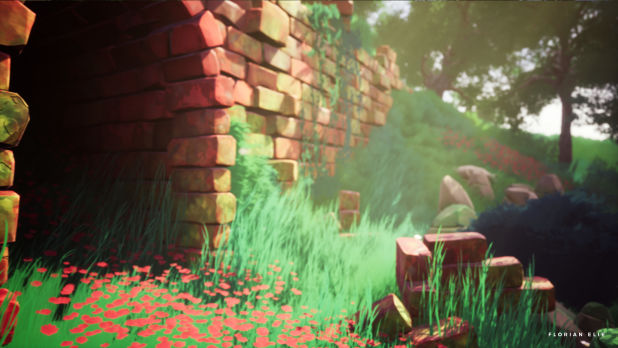 I started this scene in July, I wanted to challenge myself and make something bigger than my previous projects. I am in love with stylised and colorful games like Zelda, Journey, Monument Valley, Rime, and others, and I  wanted to make a little exploration prototype with some Zelda, Shadow of the Colossus, and Ico vibes with a Rime style. I also decided to learn Unreal Engine from scratch. Making a little map to explore was a little bit ambitious for the first time in Unreal, so I decided to make a smaller scene and illustrate one of my favorite songs «Green Green Grass of Tunnel» by Mùm. My idea was very clear in my head, but I didn’t have a specific concept art piece for this scene. I made a little moodboard of some mood references, tunnel pictures, and game screenshots and I built the scene around this.

I started the blockout with a very basic mesh that I modeled in 3ds Max. I played around in Unreal with the landscape sculpt tool and made tree placeholders. At this stage, my goal was to create an organic scene without textures, just simple meshes. I placed a skylight, a directional light, and an exponential height fog to create a very simple mood.

At first, I made a stylised brick texture in Substance Designer, but I quickly changed my workflow because the render was too smooth. I didn’t want any tessellation and I wanted to follow the direction I had set for myself – a very organic render. So I started to sculpt a modular kit of bricks in ZBrush. Only 8 bricks for the entire tunnel. I made a quick and low retopo in Maya, baked them in Marmoset, and started to texture them in Substance Painter. The texturing is very simple, I created a smart material with a light red gradient and another red variant with a slope blur filter to create a hand-painted style. After that, I added a darker color with a «surface worn» mask. Then, I applied a blur filter and a strength level to this mask to make this stylised erosion effect. To avoid repetitiveness, I just made some blueprints in Unreal and built the tunnel with them. I used the ambient occlusion of the top and bottom of the bricks to add tint variations. For the entrance, I used a path deform in 3ds Max to give the arched shape.

I made a second brick material with a moss cover and blended both to paint some moss on the tunnel with the mesh paint tool.

To make the trees, I used SpeedtTee. For this project, I wanted to learn different software solutions that I had never used before, so it was my first time in SpeedTree too. My goal was to make an organic basemesh in SpeedTree and texture it with a stylised material made in Designer. For the foliage, I used the same shader as the grass. I wanted a cel-shading effect for the foliage and used a flat normal map combined with the TwoSidedSign node to avoid the undesirable backfaces. I use the same technique for the bushes. 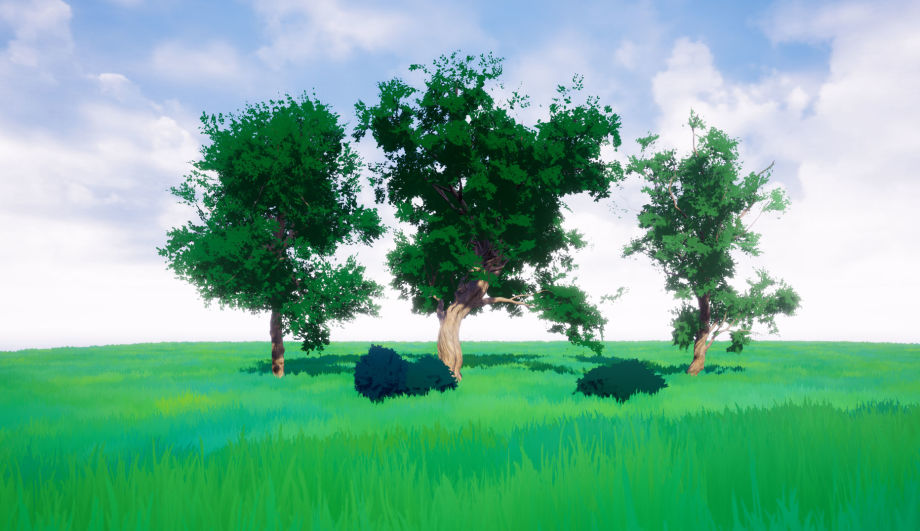 The grass was the main task in my project... and the most difficult thing to make because it was both technical and artistic which is a little difficult for a beginner in Unreal! I wanted a very flat style for my grass. I watched  a lot of tutorials, for stylized foliage and such, and eventually started to work from this awesome breakdown by Kristian Kebbe:

I made a bushy alpha in Photoshop to get a great grass density. 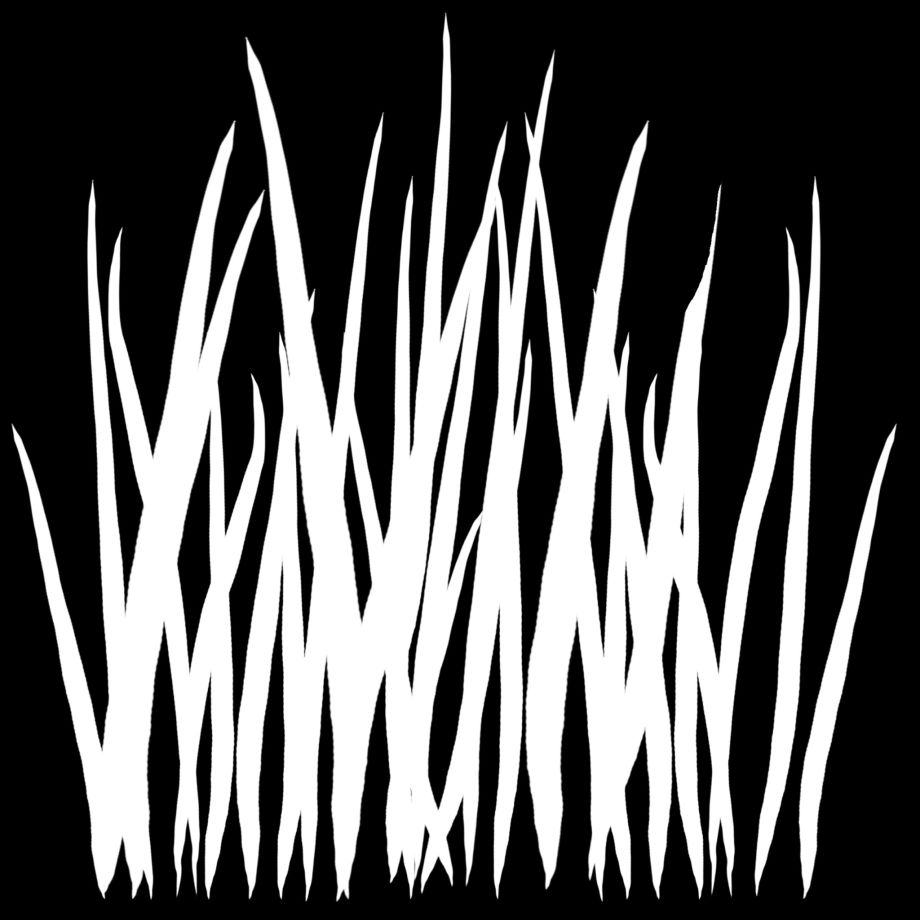 An important thing to me was to have a perfect match between the ground and the grass. I used a method found in this forum thread. I made a terrain of 63x63 with an overall resolution of 64x64. Then, I made a procedural color map in Designer of 640x640 to match the resolution of my terrain. I put a Landscape Layer Coordinate with the same tiling as the size of the terrain, 63. 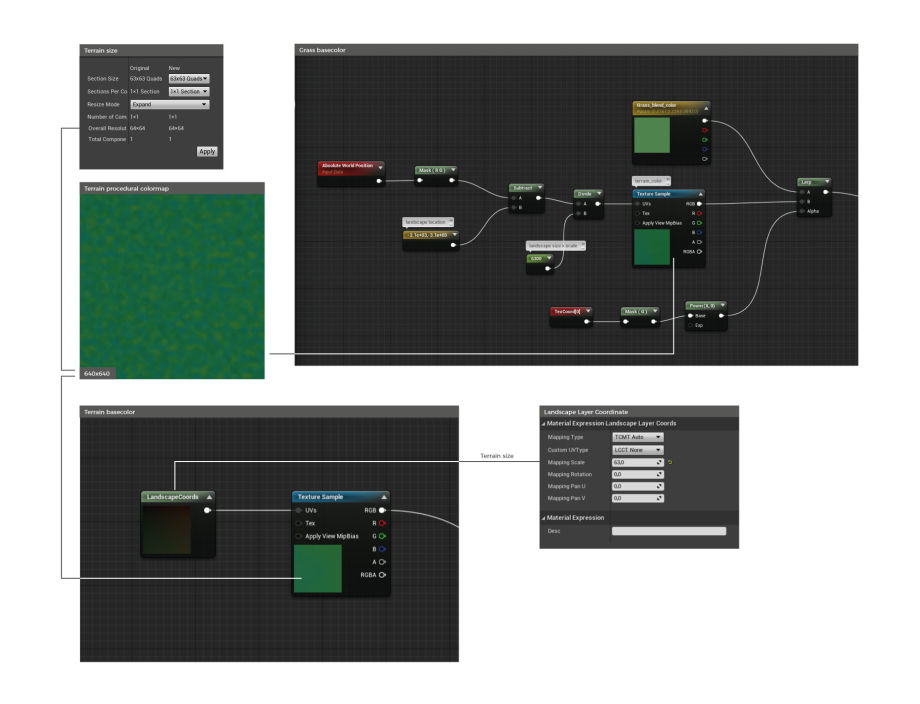 I ended up with this result: 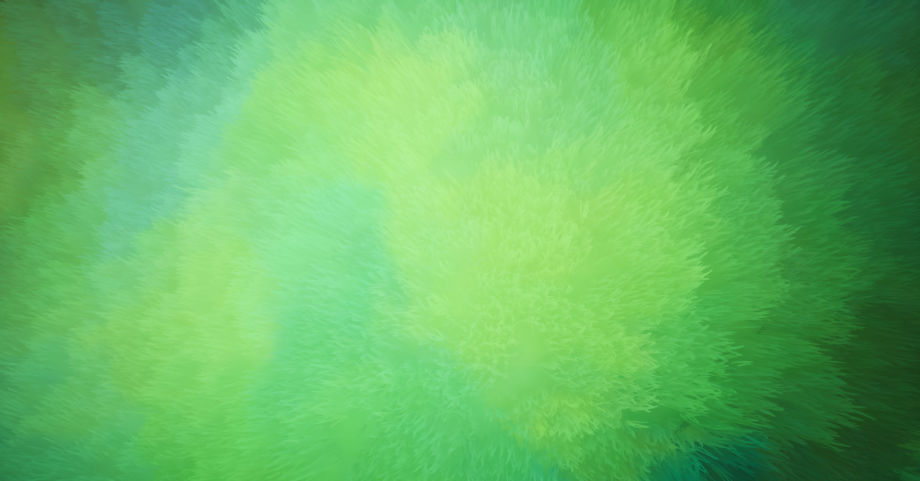 I made a second bigger version of the grass to bring some variations and credibility. I disabled the shadows on it to have a «field» effect. I wanted to have shadows only in the darkest areas, my goal was to distinguish the grass with the help of the light areas.

The flowers are very simple, just a few planes with a mask, albedo, and little emissive to brighten them. I made different LODs for the foliage, grass, flowers, etc. to optimize performances.

Of course, an important task was to add life to the scene – with the wind, particles, and lighting – to truly complete the BotW effect of the scene. Luckily, Unreal is there to help us one more time! I set up the wind with the Simple Grass Wind node, a very helpful tool that simulates the wind with a «wave» effect. I  used it for all foliage in the scene. For the particles, I made a leaf mask in Designer and followed this awesome tutorial made by Dean Ashford:

The lighting was the second big task in this project. I wanted a warm and spring lighting with god rays in front of the entrance of the tunnel. Throughout most of the project, I didn’t bother to look into the subject, so I had a very average render and was not completely satisfied. So I decided to restart the entire scene from scratch. I watched some tutorials for lighting and volumetric lights on the Unreal Engine YouTube channel, and in the end put a movable directional light, a skylight, and an exponential height fog into the scene. I converted the fog into volumetric fog and I set up my directional light to get the god rays coming through the trees. Then adjusted the directional light with the volumetric scattering intensity. 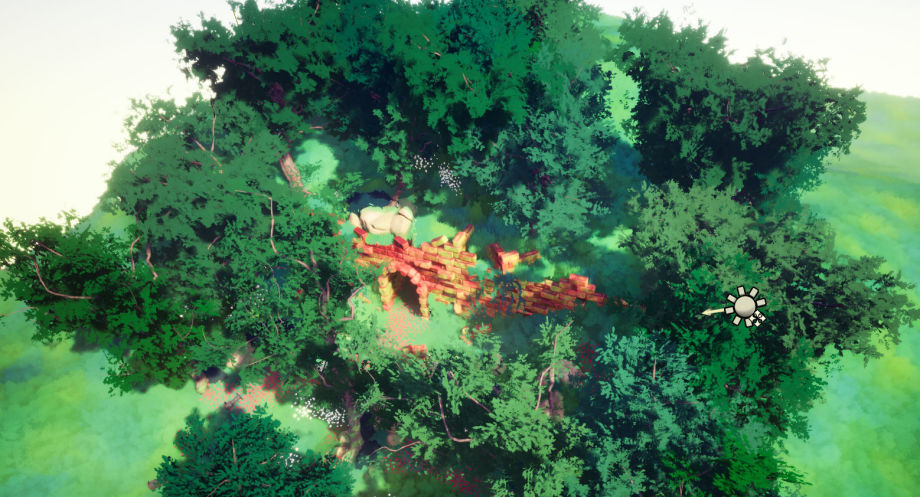 To achieve the cel-shading effect on the grass and foliage, I adjusted the «shadow filter sharpen» setting. 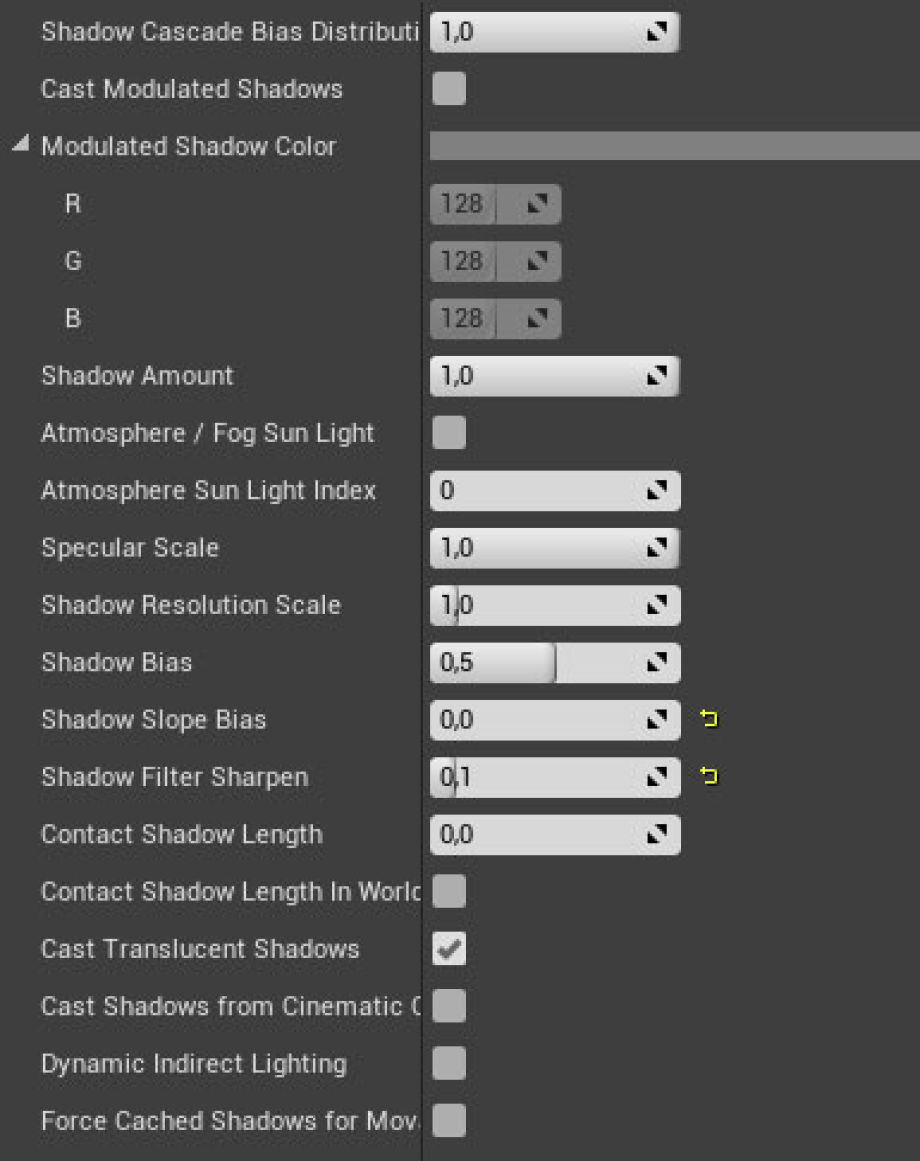 The last part of this project, the final touch, was the post-process volume. I used it to enhance the contrast and add some slight color variations. I modified the gamma slider in the global color grading. 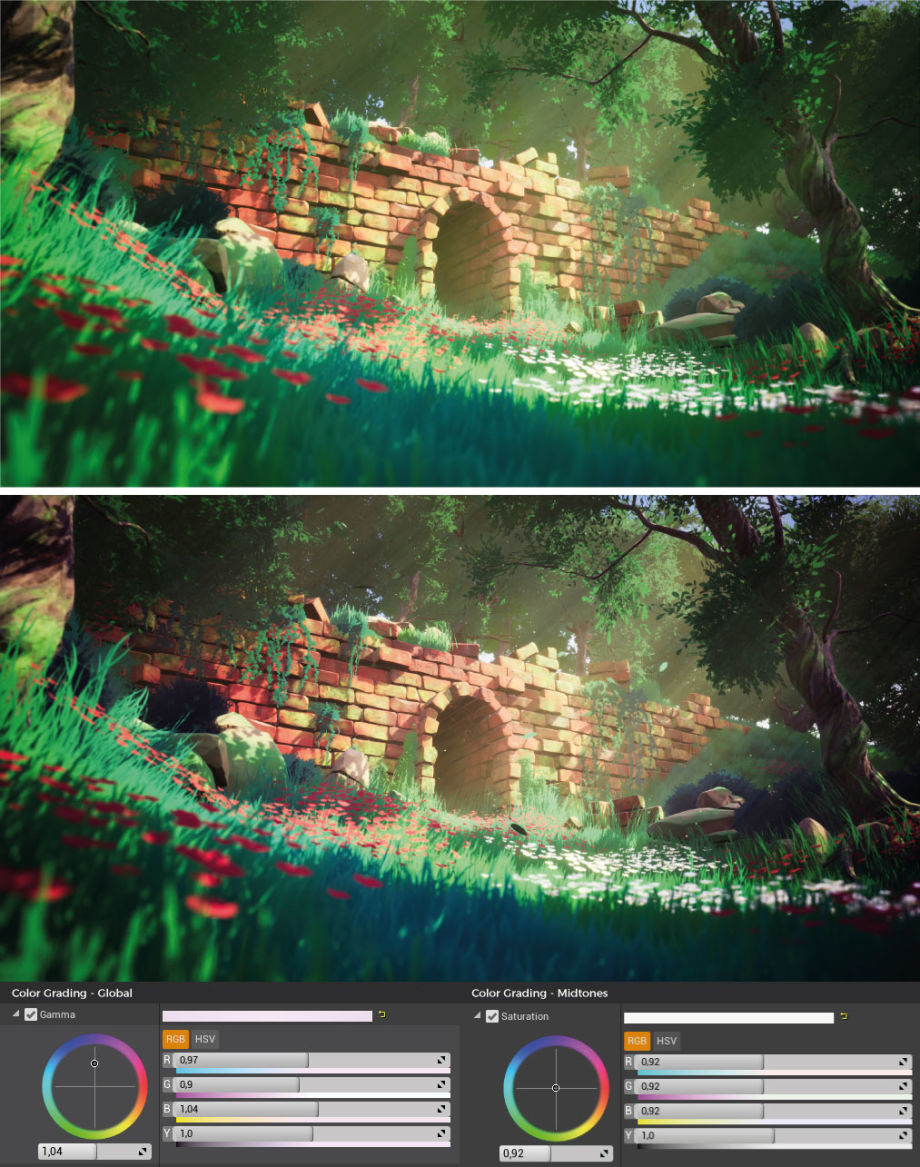 This project was a big challenge for me. I learned a lot of things that will allow me to create new projects in a style that I love and that I would like to develop further. I had this kind of scene in my head for a long time, and I’m really happy that I have found the motivation to make it happen.

It was difficult to get back to work every evening for three months after my day job at Shiro Games. One of the main challenges was to learn technical information on how to make some shaders and materials the way I imagined them. I think the main lesson I learned was not to give up during production, even in the evenings when nothing goes as planned. I almost dropped the scene at least 5 or 6 times! But I am happy that I have learned two software solutions I'd never used before. I still have a thousand things to learn, but I know how to learn them better. I am also happy to have succeeded in giving life to a precise idea that I had in mind without having a particular concept to follow. I think the best way to create an environment is to do thorough research, get a precise idea of what you want to reach, and document the process to work methodically and in an organized manner.

Thanks for reading, and have a good day!