Talented artist Anya Elvidge talks about the creation of a detailed stylized environment.

Game Art Design Student Anya Elvidge has recently published a breakdown or a small environment “Stylized Shop“. It’s an admirable project which features some awesome visuals and beautiful stylization. The author goes into a lot of detail, showing the references, describing the modeling challenges and describing the production process.

We feature the full blogpost below. We also encourage you to check out Anya’s blog, which has a lot of awesome info for artistic kind.

I started out on paper. 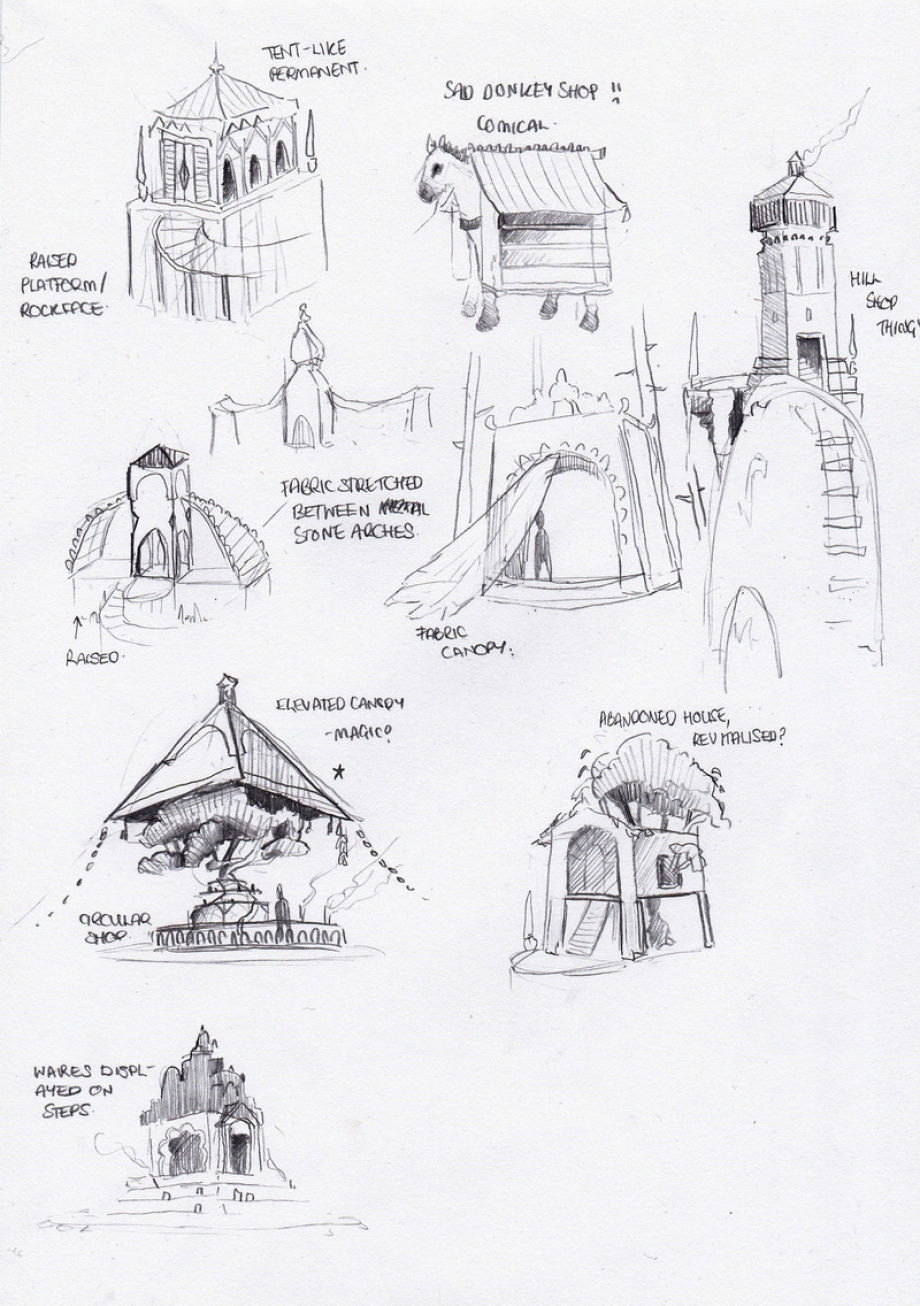 Then took scans of the sketches into Photoshop to manipulate and develop.

I did this a couple of times, working from left to right across the page. 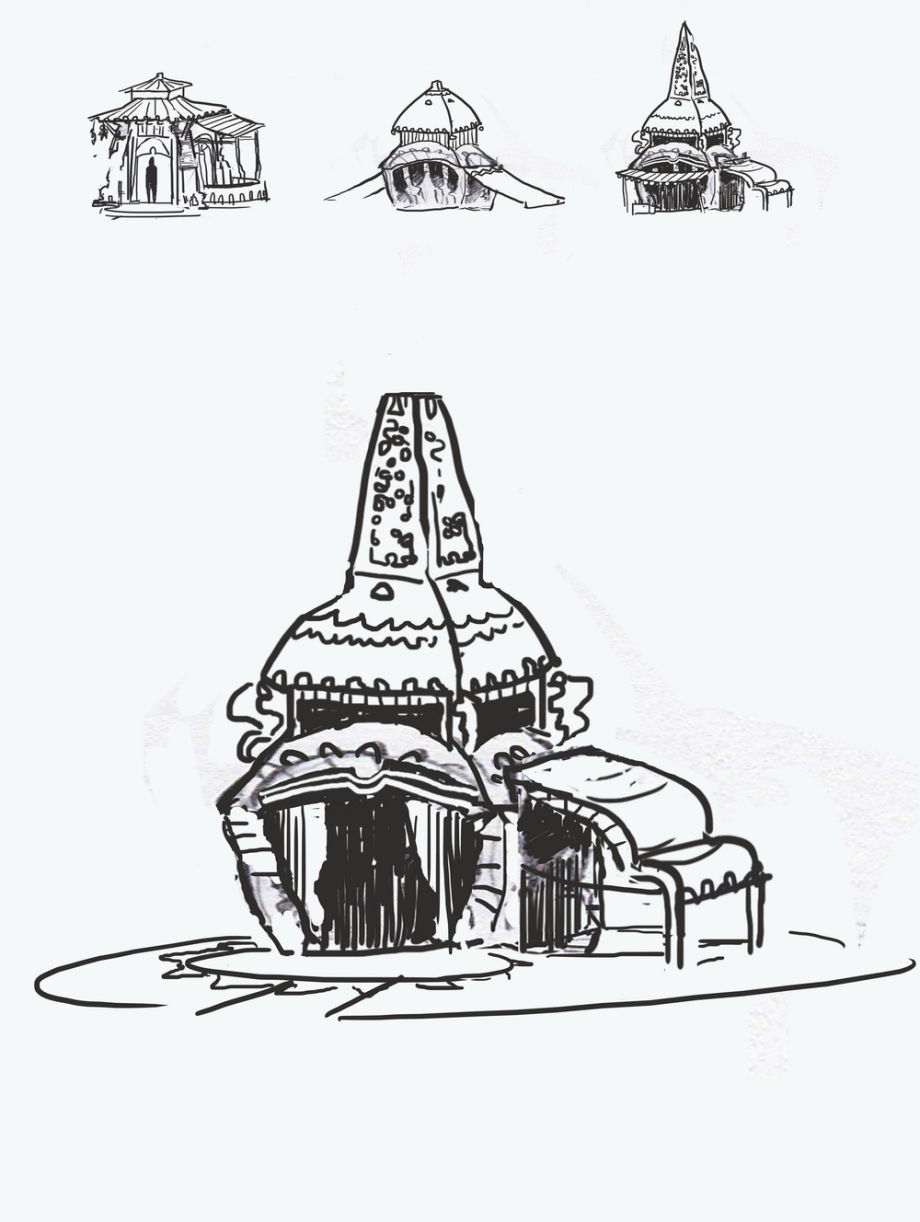 I came up with a very very rough idea so I could create some colour roughs. Many were inspired by images on my moodboard.

I created a 3D render and overpainted it, and this became my first concept draft. 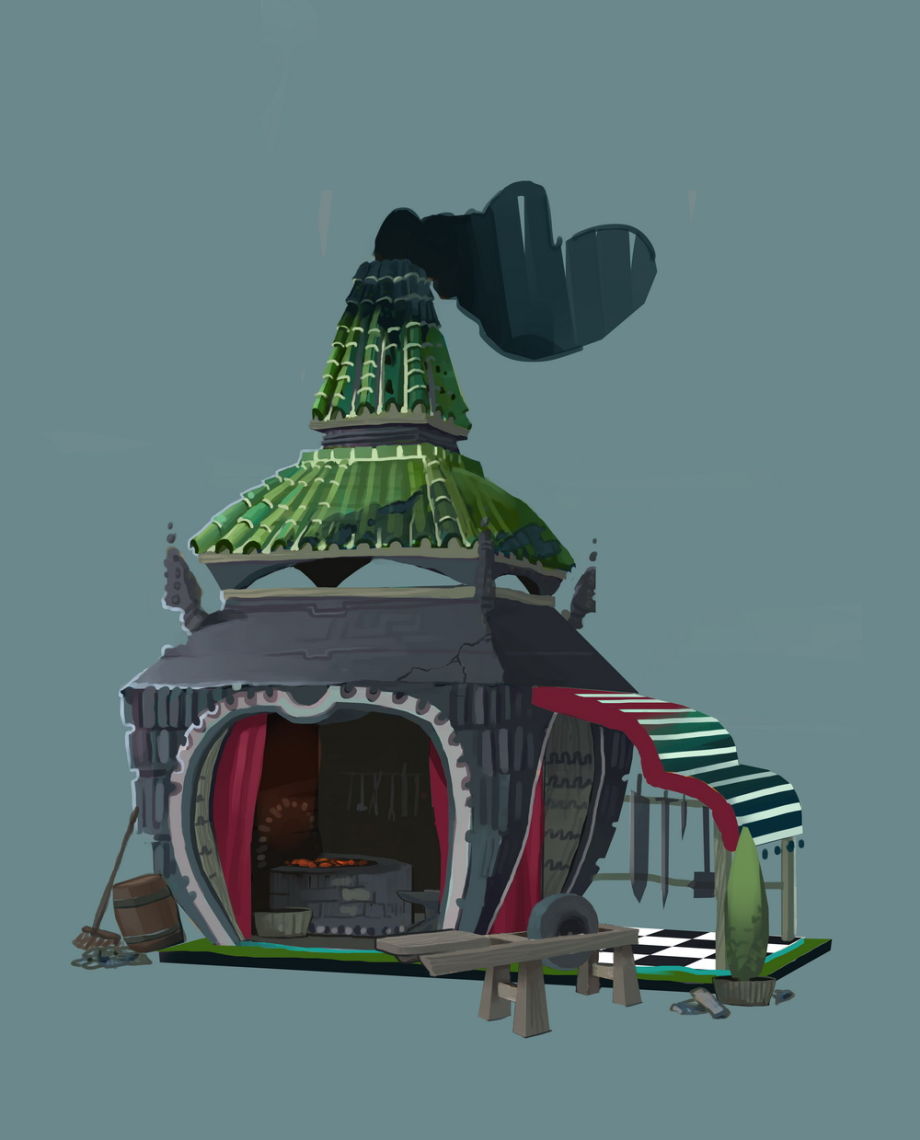 These are the early stages of development for my concept. At first I wasn’t sure of my shop type, and then the chimney caused me to gravitate towards creating a blacksmith’s. That is where the roof colour turns green, because blue felt to clinical to be a blacksmith. Green is much more earthy.

After my first concept draft was complete at the end of the first week, Mike Kelly gave me some feedback. At the start of the second week, after the weekend, Mike Powell and Stas also gave their opinions. This is how my concept developed as a result; 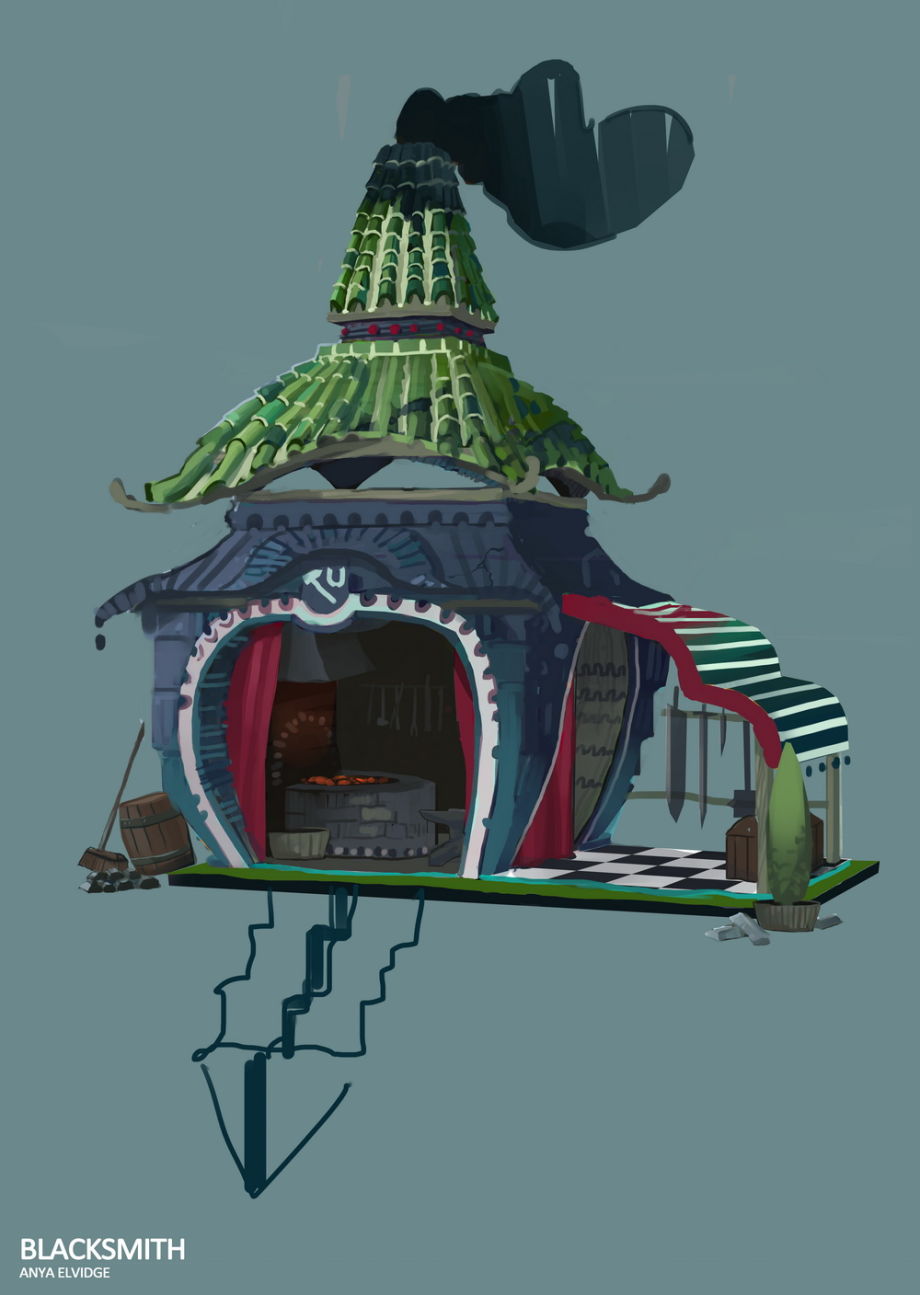 I have not included some unwraps because they were just planes or very simple. 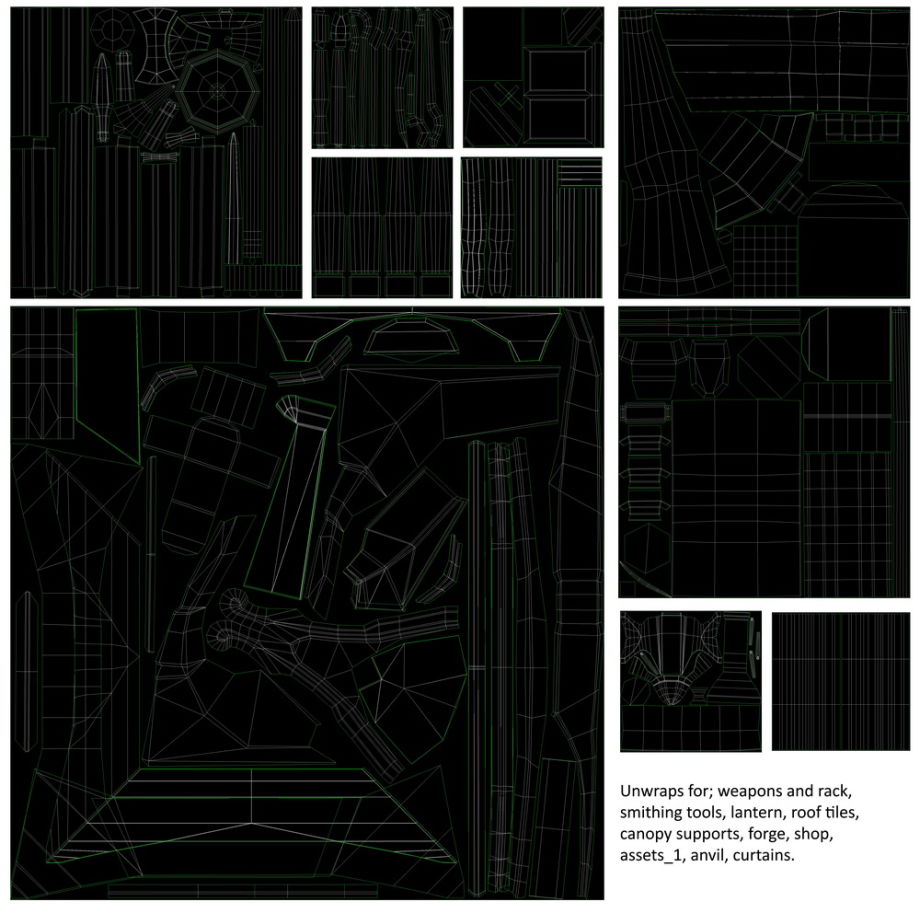 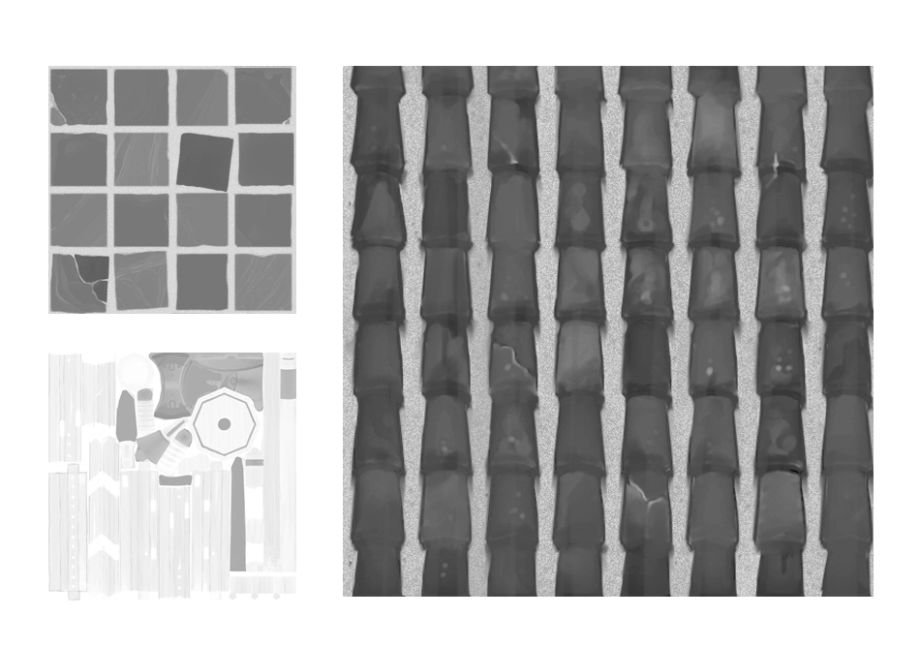 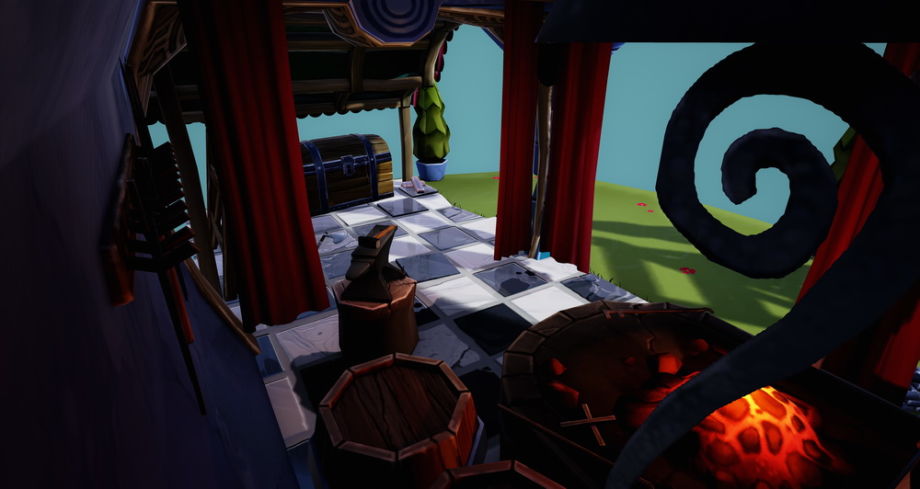 Unlit render to show my model works without lighting too; 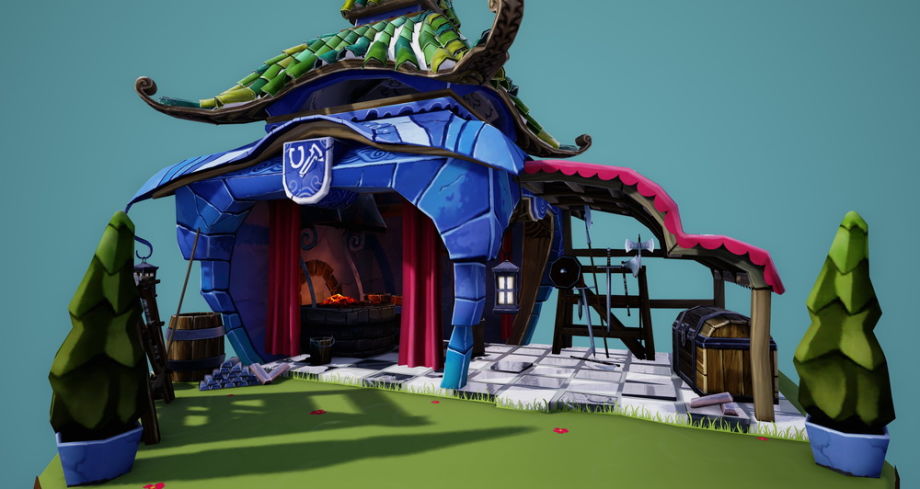 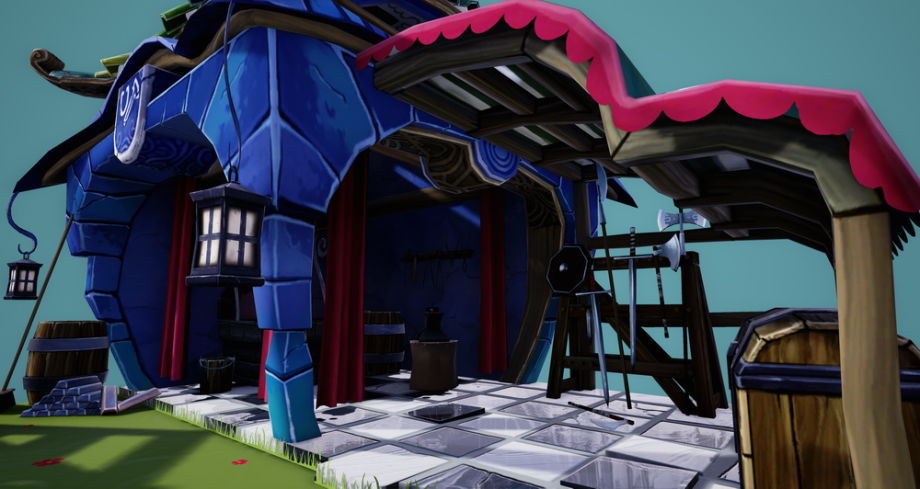 To conclude this project, overall I am pleased with my final result. I feel that I have really learned a lot about the pipeline of creating assets from concept to final model, particularly with regards to how to iterate effectively by means of painting over work. Though I found fully hand painting textures really difficult to start with, I’ve started to develop a workflow that makes painting textures much quicker than I would have been two weeks ago. I also feel that I’ll be quicker at creating interesting concepts in larger volumes, because I’ve learned some important points about how to make things more interesting to the viewer through feedback sessions with tutors.

I think the strongest aspect of this particular project is how I created such a populated scene within such a short space of time. Initially I had planned on creating just the shopfront, but it would add much more visual interest to have some of the surroundings too. I was pleased with how the little diorama turned out in the end, and felt that the colours were consistent and looked relatively pleasing. My favourite area on the model is the roof of the shop. I like the colours and the surface properties of the tiles, and was happy with how I managed to construct the roof to save tris by using planes and a normal map to fake most of the tiles, with higher poly tiles at the edges and around the silhouette.

A couple of things I didn’t do so well were time management and texturing to a consistent style. I think my time management was less effective than usual because this was my first timed project since university last year, and I also set myself too much to do. Next project I’ll have learned from my mistakes and manage my time better I’m sure; quality over quantity will be something to consider more carefully. Texturing-wise, I wasn’t overly disappointed by my work. But I feel that it took me a while to get into the swing of hand-painting so that assets I did later in the project felt much better. A ‘style’ to my texturing didn’t really emerge; I just painted things how it felt right and how I felt would be fastest. I think if I were to re-do this project I would vastly reduce the amount of work I set myself, and actually take the time to sculpt the model in Zbrush first to get more believable edgewear and surfaces while still retaining a stylised look. I’d make sure I decided on a solid style from the start, and keep it consistent throughout the project.

For next time I will be careful to set aside specific time to act on feedback and polish my work. This comes back down to my time management, as I didn’t have enough time to gave myself a day at the end of the project to revisit feedback and check I had acted on it. For example, Mike Kelly suggested I change the colour of the sign above the door to make it stand out, and I strongly agreed with this. However, as I rushed to get everything else done I ran out of time to sit down and really consider this advice, create some paintovers, and act on it to the best of my ability. This also came down to my lack of documentation of feedback. Next time I will make sure I keep a specific place to document feedback notes (not just my blog/a scrappy notebook), and I’ll make sure I add lots of paintovers as I go.

Finally, I will check earlier in the production of my work whether everything I want to do is possible. My intention had been to add some blackening to the tiles at the top of the chimney and elsewhere around the model where soot had accumulated. Unfortunately, however, the method I was going to use- decals- is a little imperfect in UE4 at the moment, and the decals appear very washed out and transparent when projected onto the model. I wanted them to be really opaque and have their own roughness that would override that of the underlying texture while retaining it’s normals. It meant that, though I still left the decals in the final scene, their effect was almost invisible and it looks like I have forgotten to act on that aspect of my concept. For the time being I will have to look into alternatives to decals.

Based on feedback during, and at the end of the project, I decided to create a quick overpaint to show some of the changes I would like to have made. 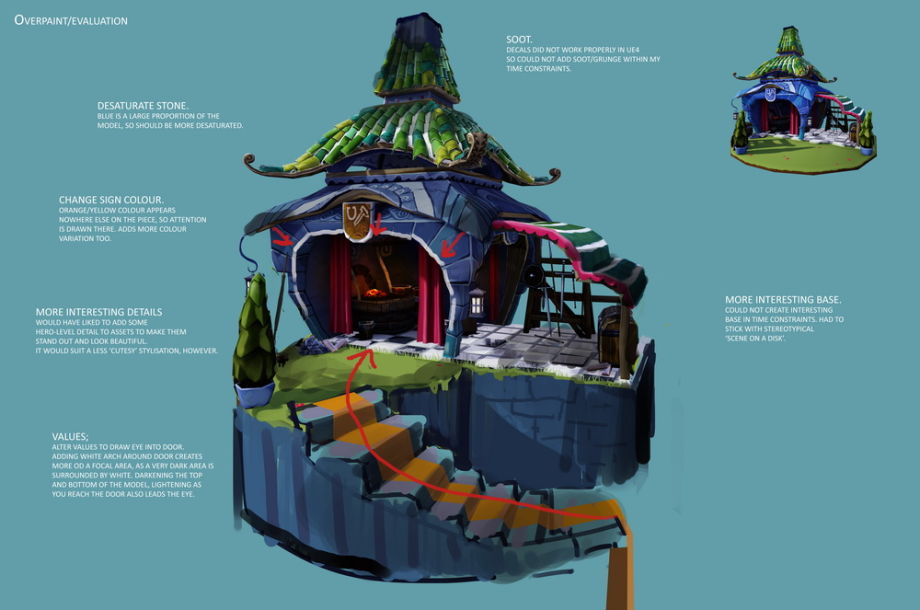