Quentin Papleux tried to recreate lighting from the movie Avatar and discussed his workflow in UE4 as well as mentioned a few sources that amateur lighting artists might find useful.

My name is Quentin Papleux, I am currently working as a Senior Lighting Artist at Sumo Digital and lead lighting on Sackboy: A Big Adventure. I've been working for almost 9 years in this industry; the time is running so fast when you are working on games! I studied at an animation school called Pole IIID in the north of France. I was studying with the goal to work on animation movies as a Lighting/Compositing artist. I did some awesome training too at a school called CGI Trainer.

I worked on many (long) projects, I was part of Shiness, an action RPG released on X1/PS4/PC a few years ago and in a few weeks, Sackboy: A Big Adventure will be out on PS5 and PS4. I hope the game will be received well, the team put a lot of love into it.

I started with Enigami, an indie company I joined as co-founder partner. It was a small team growing over time up to 20 talented people. I was responsible for everything related to environment and tech art: modeling, building the levels, painting landscape, setting the lights, post-processing, performance, VFX… everything you can see! Then I moved to Sumo Digital (Sheffield studio) to get more international experience, and they welcomed me nicely as their first lighting artist on Sackboy. I helped with multiple projects but Sackboy is my main project in the company, from prototyping to the release.

I got into the 3D world due to my love of comic books (American, French/Belgium) and animation movies. Obviously, at the time, it was impossible to make a living by drawing comics, so I moved to 3D Animation studies. Then, I got the opportunity to create a company with Hazem Hawash and Samir Rebib (and other people) around the Shiness project. Those were intense years, and I learned a lot about making video games from scratch to the final TRC checks. 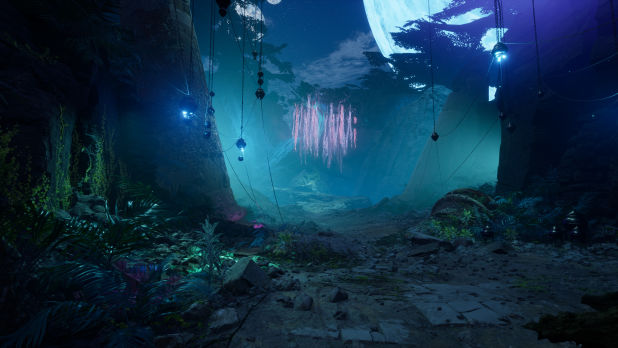 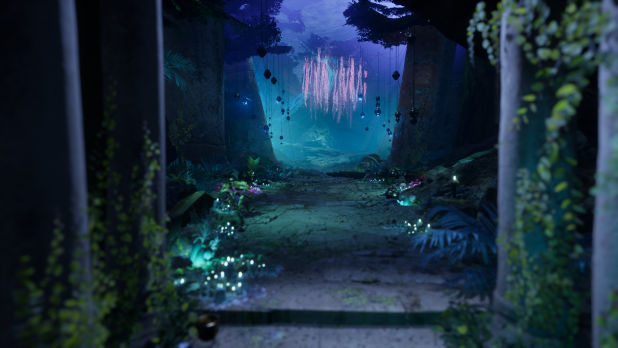 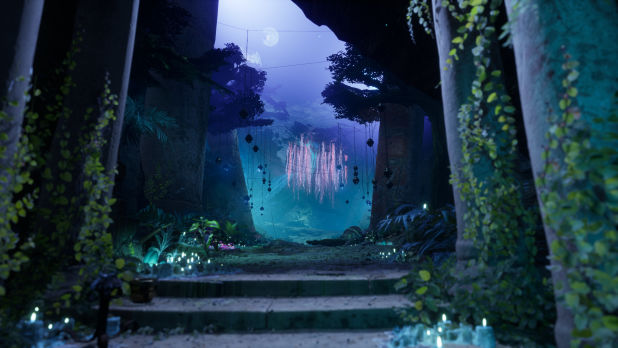 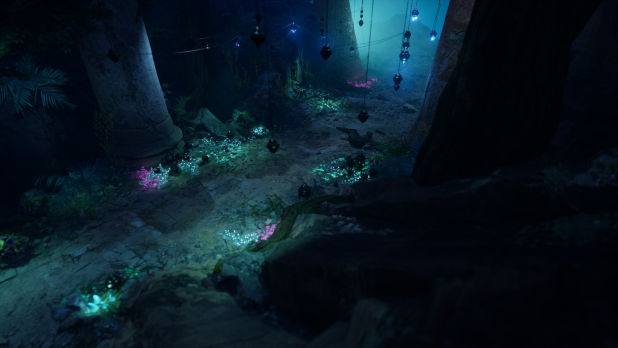 Avatar-Style Relighting: About the Project

I started my Avatar-Style scene precisely on Monday, 28 September in the evening and finished around midnight. It was really a speed lighting exercise on a small portion of the Goddess Temple. The base scene is made by Quixel to show that a “Movie” quality can be reached in Unreal. The idea was to delete all the lighting and VFX, starting all the lighting work from scratch to run at 4k 30fps. The base project was not able to run in real-time and it was using raytracing. I did not work with a lot of references for this exercise, I mainly used one concept for support and 3 pictures from the movie to help me with the colour grading.

I think the movie has a unique identity. Even if in sci-fi and fantasy movies, it is common to see fluorescent elements, it’s rare to have this constantly everywhere. In Avatar (the movie), the day and night lightings are different. The first one is set to contrast the Na’vi people with the rest of the environment. Most of the shots with humans are desaturated and look more monochromatic (Grey, Green, White). It gives the human side a cold identity, sometimes the gray foggy mood gives more aggressiveness. Some shots with the researchers are warmer, probably to match the idea that they are not as bad as the militaries. There is an ecological mind behind this movie, it’s about humans destroying the wild (and the planet) and the Na’vi people fighting to save the beauty of their eco-system.

The night is a complete switch of the mood: it is dark and dangerous but mysterious at the same time. The environment and all the elements seem to be alive and breathing. Nature becomes fluorescent with a mix of pink, purple, blue, and green colours. The Na’vi people get a little bit lost in the night but they are still readable. This idea to get the characters more merged with the background is probably there to reinforce the idea that they are deeply linked, they’re one. 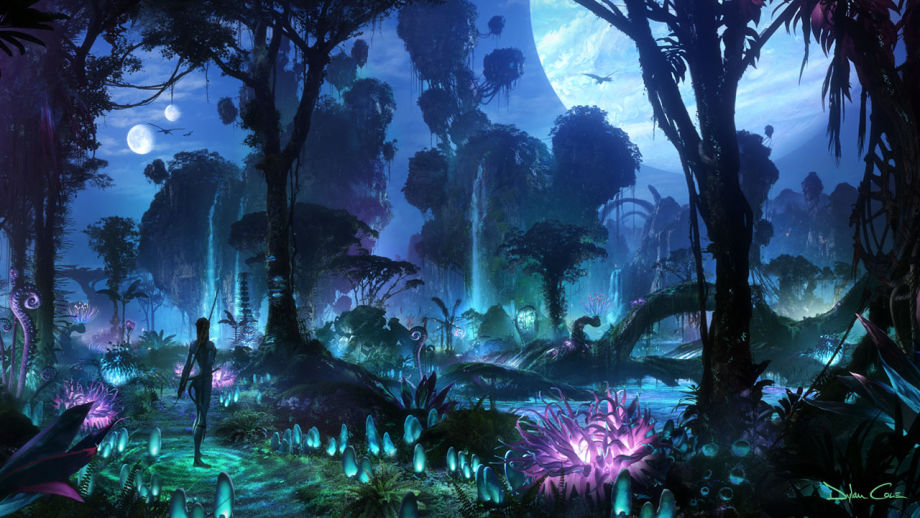 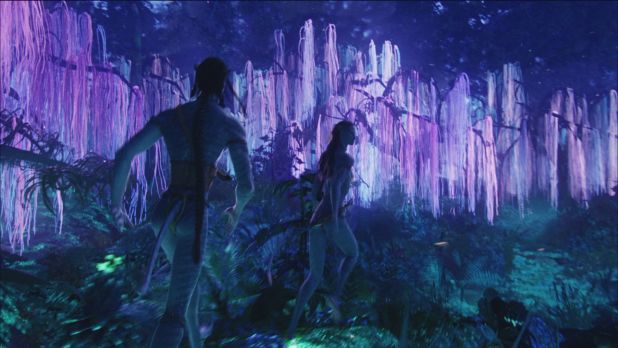 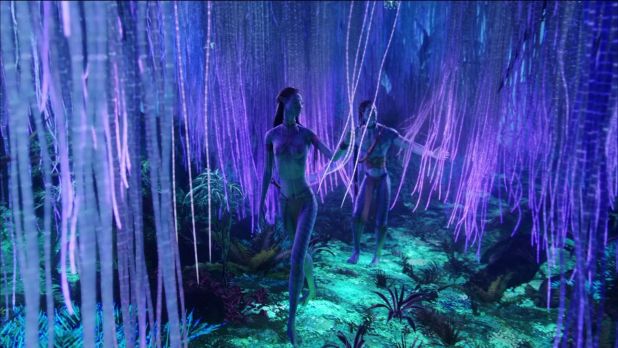 For the scene itself, I used the Goddess Temple as a base; the shot is simple and works well: one corridor showing one main element in the background. The perspective emphasizes the key actor which is the tree. I quickly created a blockout of the vegetation eggs that you can see in the concept, but most of the plants are coming from the scene and other Megascans packs. I avoided touching the scene geometry too much and only deleted most of the background and redressed the mountains/walls.

I used a basic setup for this scene: a directional light and a skylight (with a cubemap), a few spotlights and that’s it. I used some dynamic spotlights with no shadows as control actors for the volumetric fog. For that, I crank the volumetric intensity value and use low intensity, so I don’t get any light from it. The best option is to use a proper tool made for it with all the lighting features disabled, but in the vanilla version of Unreal 4, other possibilities (fog volume, using meshes, VFX) tend to be more expensive for this effect. On the other hand, there is always this nice light shaft mesh which is our best friend. For the tone, I tried to match the night references I found as much as possible – it was just a matter of tweaking the lighting and post-process, no magic behind it really. 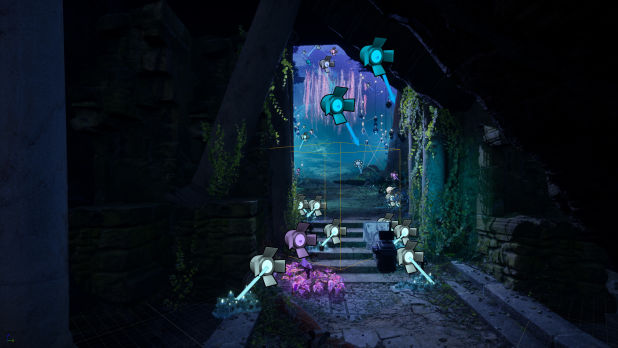 All in all, it was a pretty linear workflow that started with a first pass on the basic setup – Sky/Skylight to set the minimum brightness and normal details and Directional light to set the first lighting source (the moon). Then came all the decorative lighting on the plants and also playing with the colour to guide the viewer towards the tree. In lighting, the idea is to always guide the vieweres as well as set the rules and respect them throughout the whole project. The purple here is the lead colour, leading the eyes from the ground to the main tree actor in the background. The green and the blue colours are secondary. 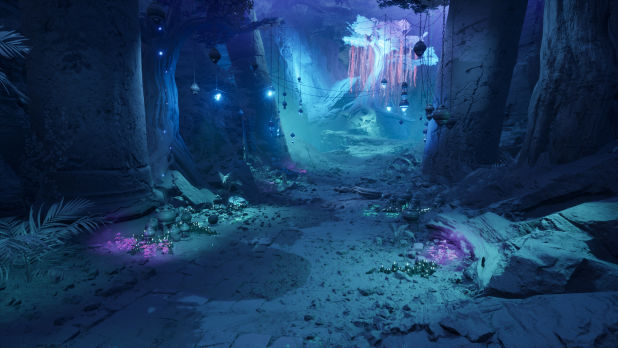 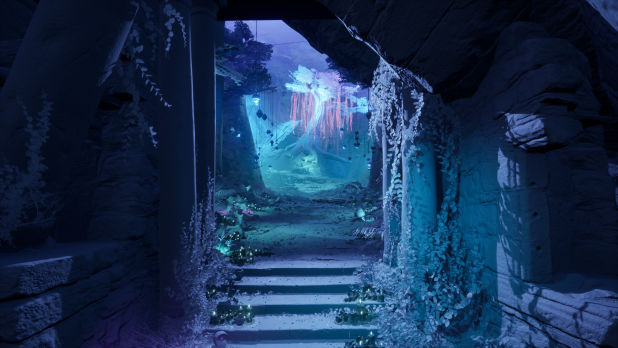 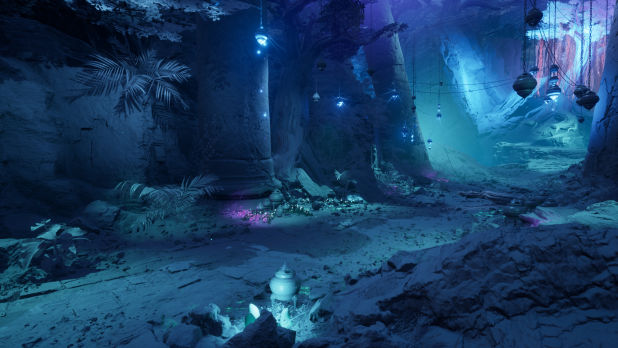 I used two different ways to get some emissive. Since it was a quick exercise, I did not want to go into creating emissive textures for each element. I basically put spotlights on the top of every plant I wanted to glow. I also used a moss texture decal with an emissive on the top for some areas. For the moons, I also decided to use a very cheap way which is setting some spheres very far in the scene. Normally, I’d include them into the sky sphere texture to blend them completely with clouds.

For everyone looking into Lighting, either professionally or for a personal project, I'd recommend giving some attention to lighting the details and learning each step of the rendering process. This means having good knowledge in all the fields that might affect your work – and in production, this is mostly all the departments! As lighting artists, we are responsible for the output quality of the image, which implies the involvement of the whole team: Tech Artists (VFX, etc.), Programmers, Environment Artists, Designers… Besides that, the best trick in real-time lighting is to build the lighting as simple as possible and limit shadow sources and radius. The shadows play an important role in the rendering costs in the Forward and Deferred rendering.

And here're a few resources for studying:

Eric's disclaimer stated below is a good warning about what the job in the video games industry is about. Lighting artist is a recent specialization, it’s one of the jobs that come from the film industry but with a bunch of new challenges set in real-time.

“This is based on my experience only. If you ask 10 Lighting Artists how they might do something, you would probably get 10 different answers.”