Cory Cosper shared some insights into the production of Moth Girl, a 3D character made in Maya, ZBrush, Mari, and XGen.

My name is Cory Cosper, I am a Lead Character Artist living in Los Angeles, CA. I have been working in the industry now for almost 13 years after earning a degree in computer animation at Full Sail University in 2007. I’ve worked in games, movies, commercials, and currently on TV shows such as Supergirl, Flash, and Black Lightning. 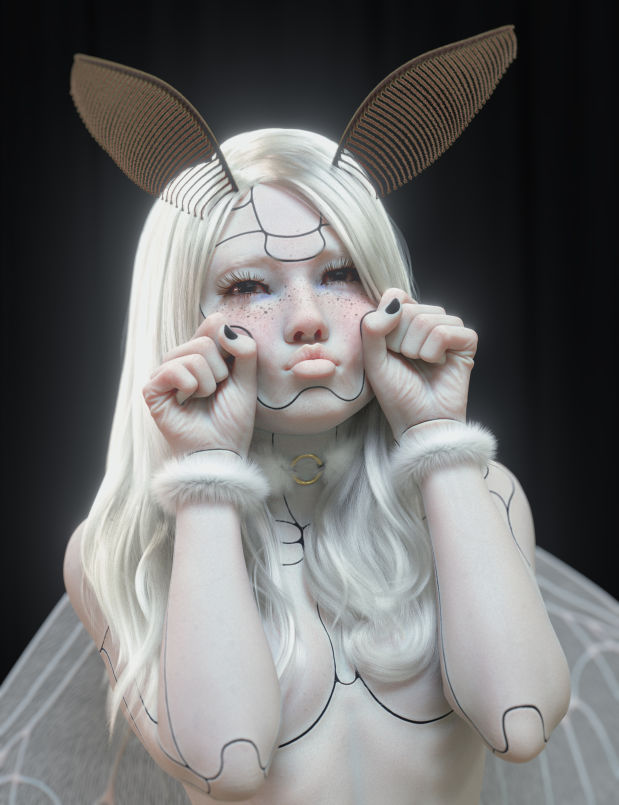 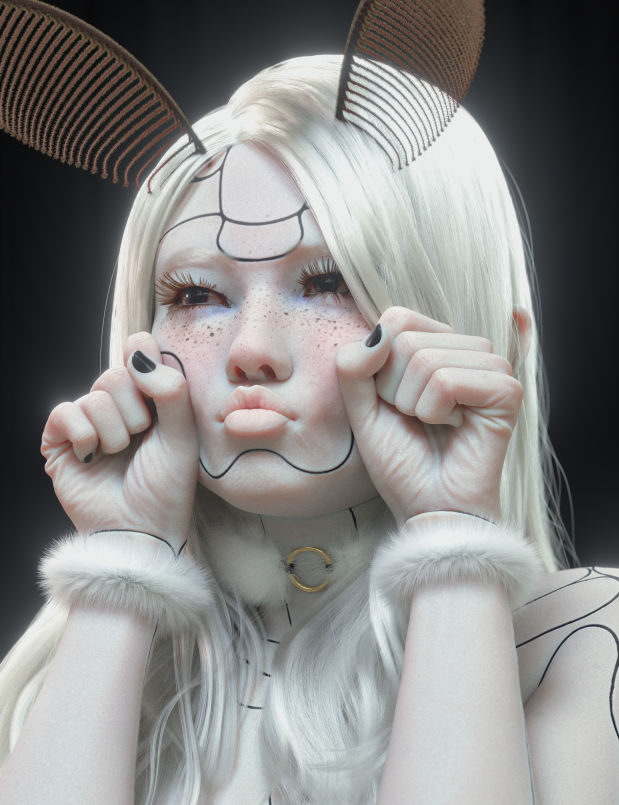 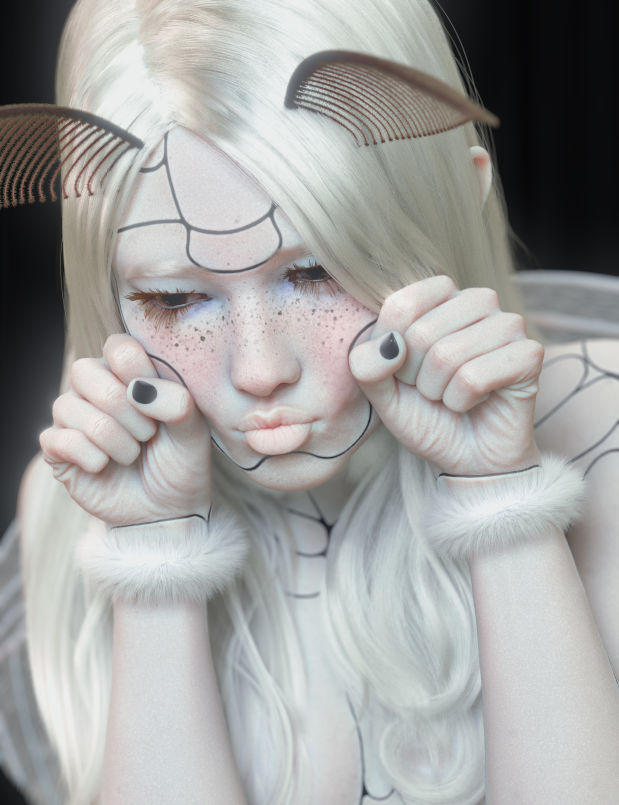 I wanted to do a series that mostly contained portraits and something that, I hoped, wouldn't be too time-consuming per model. Years ago, I bought a series of prints by Katsuya Terada titled “Cover Girls” that inspired me to do a similar series. I realized that the Moth character would take longer than most because her hair would be pretty time-consuming, but I knew where I wanted to go with her. I had a pretty clear image in my mind of what I wanted the final look to be.

All the ideas start with a particular facial expression or pose that I want the character to have. Usually, I will find a few reference images that represent the pose I want and try to match it. In this case, the lips and her expression overall took a bit of tweaking. You never really know how the model will look until it's lit properly, so there was some back and forth between Maya and ZBrush until I was satisfied. As for brushes, I don't use anything fancy or custom, just the default ZBrush brushes.

The hands were a lot of fun to sculpt, I had good reference so that's really the most important part. For skin detail, I used textureXYZ on the face and different skin alpha swatches to cover the rest of her body. Too bad the strong subsurface scattering washes most of the detail out but I felt it was important to add regardless. 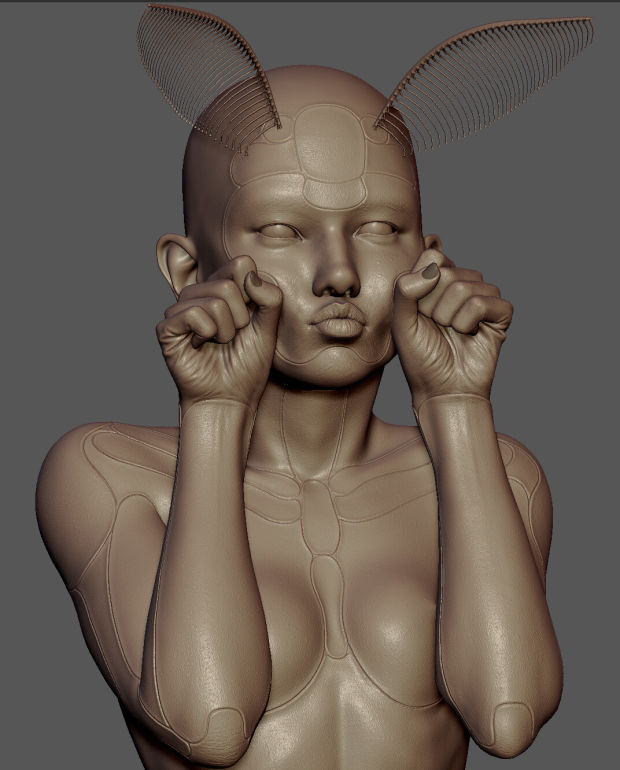 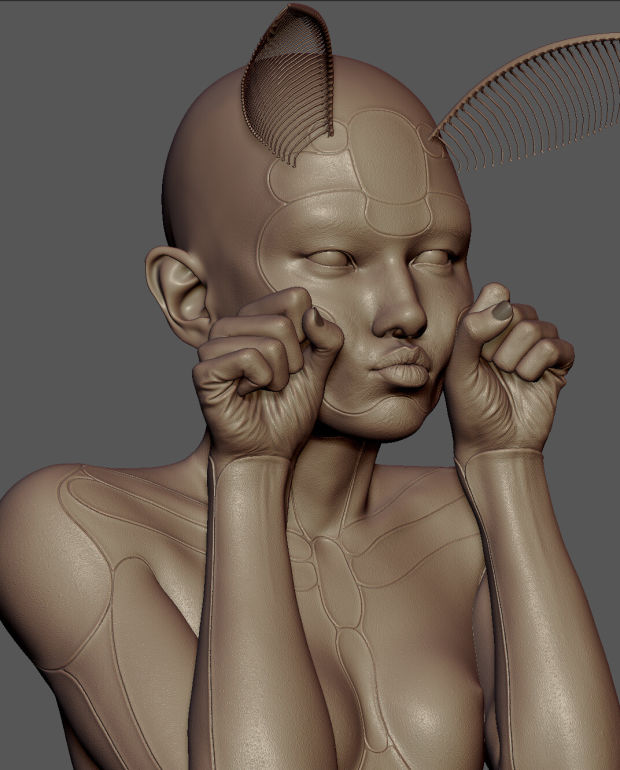 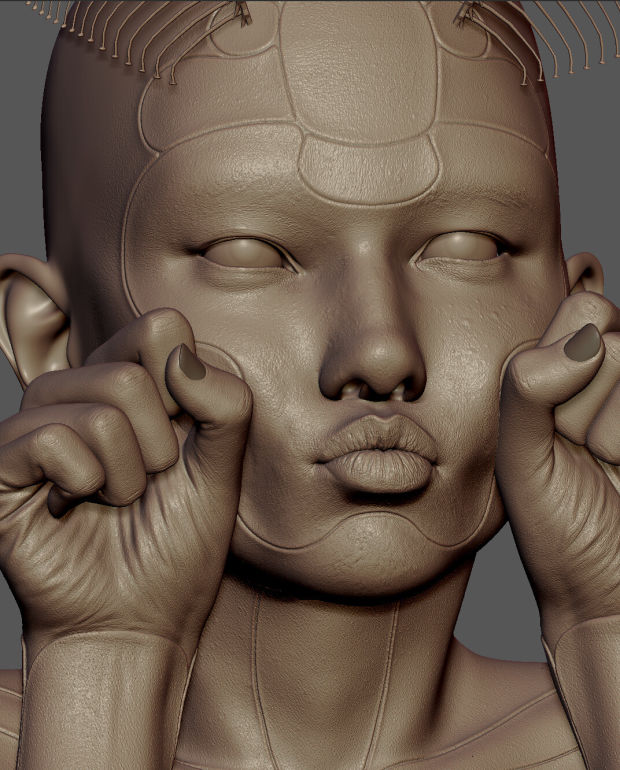 The hair was by far the most labor-intensive part. I used XGen for all the hair, both regular XGen and Interactive. The fur was pretty simple but for the hair, I used guides at first to get the shape 80% there, then convert them to XGen Interactive and finished the groom. Interactive gives that extra level of control that the guides just can't provide. Using a combination of the select and freeze brushes, I found a way to easily isolate any strand or group of strands and fix any layering issues or weirdness.

I use Mari for texturing. I work with very few layers and always in a non-destructive manner, meaning no two different elements are painted on the same layer, like the freckles on the skin, for example. I also make sure to name all my layers and work with masks as much as I can. The paneling or black lines on her body were painted in ZBrush very carefully so I could deflate them in the sculpt, and it was easy to extract that as a texture that I could use in Mari. Originally, I had painted a much more complex color map but it didn't work, so I ended up with a more simple approach. Working with an almost pure white palette was a challenge but adding pinks and blues strategically and subtlety seemed to work.

I used Arnold to render the images, and let me just say that HDRI Haven is an amazing website. I tried a bunch of different HDRIs, and once I narrowed it down to a more ambient lighting I went with one I thought the hair looked best in. Then it was just adding an extra light for the face and that was it. For post, I used a ZDepth pass in Nuke for the depth of field and Photoshop for color correction.

Patience was the main challenge. The hair was daunting and it's unfortunate that no hair system out there offers any real help in making hair look natural, it's all very labor-intensive. It's hard to say how long it took to finish, it was longer than most of the other models I have in mind for the series, but I knew that going in. To achieve the quality of the image I want it takes a considerable amount of time. That's the nature of character art; it's like a photo shoot with a live model except you have to create the model, sew the costume, do the make-up, build the set, and light the scene.