NVYVE Studios is working on an innovative and visually stunning sci-fi survival game P.A.M.E.L.A. During GDC 2015 we’ve had a nice chat with Adam Simonar and Elena Peters – the two leads behind this incredible game and discussed it’s features.

A couple of weeks ago we’ve shared a little teaser of our interview with NVYVE Studios. This small indie company is working on an innovative and visually stunning sci-fi survival game P.A.M.E.L.A. During GDC 2015 we’ve had a nice chat with Adam Simonar and Elena Peters – the two leads behind this incredible game and discussed it’s features. While the teaser talked more about the use of Unity 4 during the development, this part of the article is centered around the game and its incredible features.

We haven’t actually worked in games. NVYVE studios actually came from NVYVE, which is a architectural, visualization, product visualization company; which we were founding members of with our CEO. So we basically learned about the ropes about Unity. As part of that, for a couple of years we “went out of university” and entered this opportunity that came up to do that and from that now we’re making Pamela with ourselves and two other guys.

I think it started at a restaurant to be honest, we were just sitting and talking. It was a conversation we were having about trying to take these games that we really love like DayZ, Mass Effect, Bioshock and turn them into something new. There’s all these games we’re referencing from a few different areas here.

On one hand we have amazing sci-fi where the universe has been really fleshed out like Mass Effect. Then you have survival experiences such as DayZ where you have an open world to explore and survive. We were thinking that we love these kind of games but there’s never really been a game where you have a rich sci-fi universe and a heavily designed environment where you explore and learn how the society works. How the people live there and how they power the city and what stores they have in their city.

Sci-fi games in general only touch barely on the edge. In Mass Effect you have the Omni-Blade on your arm and it’s like: “I want to do stuff with that”, “I want to look at it and see how it works”. In our game we’re using that design language with the UI. We give an opportunity to try everything out! You can see all of menus in-game kind of like in Dead Space. Dead Space started it and they brought it close to you and we’re putting it on you! We want the whole world to be something that you can touch, feel, and learn about.

We did a lot of prototyping with the interface and the inventory and the way that we wanted everything to work. It was very different. We didn’t even know if it was a good idea. We were kind of like, we want this arm UI but does that make sense? Is it going to actually feel good for the player? So we did a lot of prototyping early on. Our inventory is kind of like a weapon gun-looking thing. It’s the closest thing to a gun we have in the game which is kind of ironic.

The people who live in our virtual world are used to scan the entire environment with this tool. The location opens up in this weird way. We did a lot of exploring and said let’s just not make menus for our game but let’s make it feel like you’re the character in the game. You have this cool thing that actually is real instead of this menu that is fake thing in the game that’s given to you it’s actually like a real thing in the world that you can imagine using. That’s kind of where we came from on that aspect.

The game at its core is open-world survival horror. It’s exploring the environment, the different stores, different destinations while finding weapons and equipment and food. You’re going to find all that in places where it makes sense. So you can go to the security outpost to find weaponry. And not find weapons in someone’s drawer because that doesn’t make sense. In so many games you find just random stuff in places that don’t make sense.

We play games like DayZ but the problem with them, I find, is you play them for 30 minutes and you tend to get everything you need and then you say okay I feel safe and I’m good; why should I keep playing? So really for us the gameplay is really going to be about progression. Kind of like Borderlands you pick up a million weapons then you keep thinking, what’s the next thing going to be? We really want to make it so that you can have an infinite assortment of weapons on your arm and there’s five slots and each of them augment what you have and you can tweak them all as well. It’s not shown exactly at this moment, but in the future development we want to make it so that people can really just put a whole bunch of things together and come up with weapon combinations that we would never even think of to do these really interesting things.

You probably saw if you look at the demo, the arm-blade. That’s just one example of an attachment that you can put on and different types of guns, different types of non-lethal weapons. So like your arm is basically this modular thing. It’s kind of like a character in an RPG you have equipment slots on your hand and you have all this kind of stuff. So that is kind of like your character in a way, your build basically.

Unity has been great because it’s just so easy to do stuff. Unlike Unreal or some of the other engines, if you wanted to do things fast in Unity there’s no barrier to it. The coding is kind of a little quick and dirty right now but to be able to get your prototype it just takes days and that works fantastic because the stuff we’re working on currently hasn’t really been done as much. Like the aiming system, it’s kind of almost like a third person aiming system in a first person game. At the beginning we said that it’s not going to work, but when we got in there it felt so immersive and so interesting so being able to prototype things in Unity so fast has been really great.

We pulled a lot from Mass Effect. Honestly, we grew up on Halo 2 but I wanted it to be something more approachable because you look at Halo and you can’t see where they sleep, or eat, or anything. It’s just kind of blocks.

Mirror’s Edge with that color palette is great. Just having that beautiful whites and the spots of color is just fantastic. When Elena was going through school for concept art, everyone was telling her that she can’t do a sci-fi game in a pristine world. It had to have wires everywhere and be dirty. Why? It would be dangerous just walking down these corridors and tripping and everyone would be suing each other. It didn’t make much sense. So from the beginning we wanted to make a world that a person would be happy living in. It would be so depressing living in a lot of the universes that a lot of the people have created so far. People love color, they love to see things artistically. The entirety of Eden is almost a sculpture. 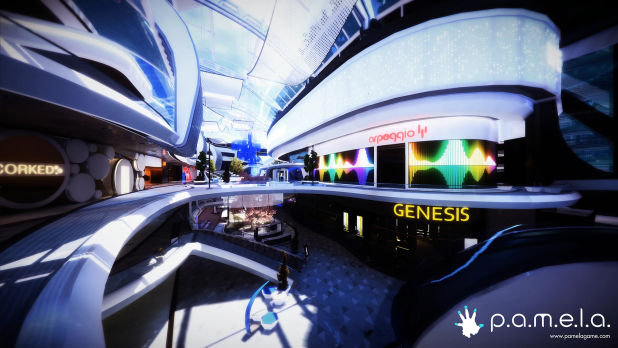 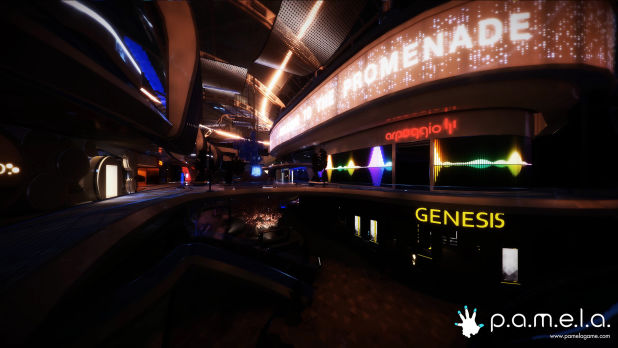 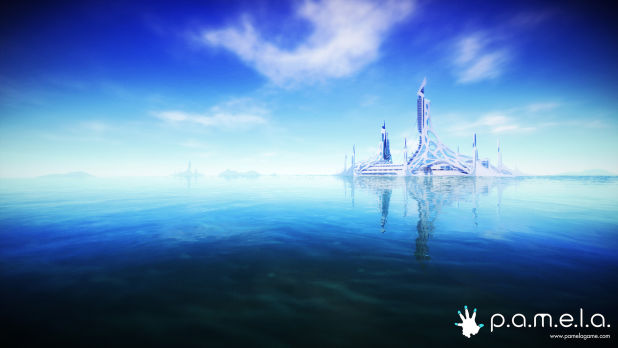 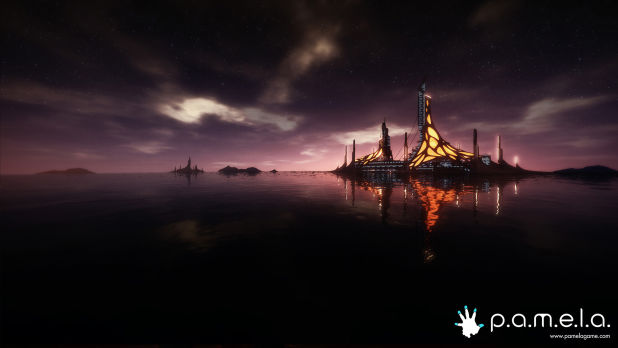 Part of the theme of the game is bouncing between the light and dark, and the contrast between one environment that looks inviting and when you look at a screenshot you wouldn’t even think it was a horror game. But we turn it on it’s head and we take that safety net from underneath the player and say, you know this is actually a really terrifying place at night. There’s these enemies that are very dangerous, they’re going to hunt you and you become the prey.

We’re trying to stay away from random generation because we’re going to randomly generate events that happen but the actual world itself we keep designed and gigantic. The place that we’re showing at GDC is only of six areas and the other areas are much bigger than this. There’s a huge amount of environmental modeling and design that goes into it. We have a little bit of an architectural background so Elena and I work pretty closely on developing the level design and how everything is going to look. It’s basically just a lot of work that goes into it. Each area has to be very specifically designed. 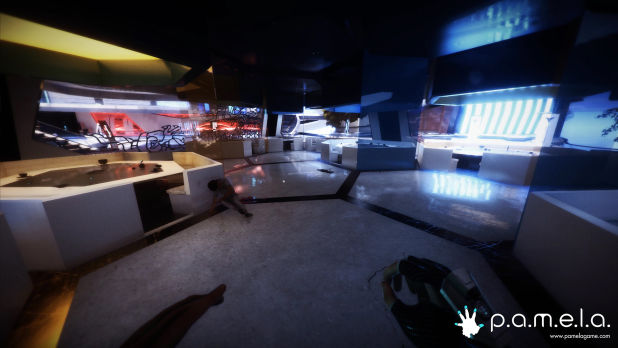 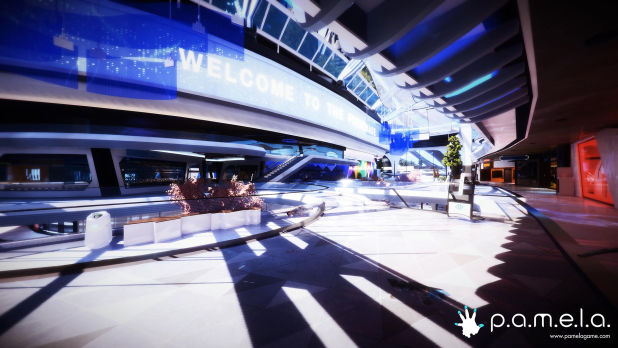 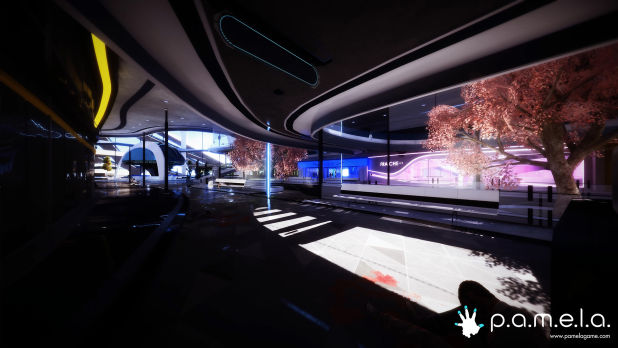 We’re looking at Steam and Windows/PC. This is the first game that any of us really worked on and so we want to make sure that we aren’t over-promising and that we’re delivering a really awesome project on Windows and depending on how things work over the course of time, we would love to look at consoles. Especially the PS4 and Oculus as well because a lot of people have been asking for Oculus. We actually have the DK so we can test it and we’re keeping up with it and Oculus. Hopefully, at some point we can get a working build with that, although I think people may get a little bit sick in a first person game. We don’t have a firm date right now. We’re thinking of early 2016, sort of. We don’t want to make any promises. We’re pretty early on. Even the fact that we’re at GDC we’re showcasing it very early on and it’s just an Alpha demo.

So we’re kind of in an interesting situation because as we started in NVYVE doing architectural visualizations and product visualizations, we built up this very strong foundation of a successful business with lots of clients. We’ve done with architects, we’ve done work with Home Depot, pretty big clients. We’re pretty fortunate that we’re keeping the team size very small. We’re trying to keep our footprint tiny and we’re funding it from all the hard work and all the hard work that continues to go to the non-gaming part of NVYVE.

We’re funding the game, marketing it, and we’re directing it. We were just basically announced yesterday so we’re going to probably see over time that we’ll need dedicated team members. Hopefully everything goes very well. We’ll probably need a person who’ll be managing our marketing stuff.