Michał Kubas recreated Maldele Hospital in Unreal Engine 4, trying to understand how to retain the symbolism of objects in games.

Michał Kubas recreated Maldele Hospital in Unreal Engine 4, trying to understand how to retain the symbolism of objects in games.

The idea behind creation of this environment is a very interesting design and theoretical issue. The idea for its development came to me while wondering whether objects in games will lose their iconic character in the future altogether. To cut it short, I think that we are slowly gaining the possibility to create so unique objects in games that we no longer treat it as a symbol of a particular object and start to analyse their unique character. 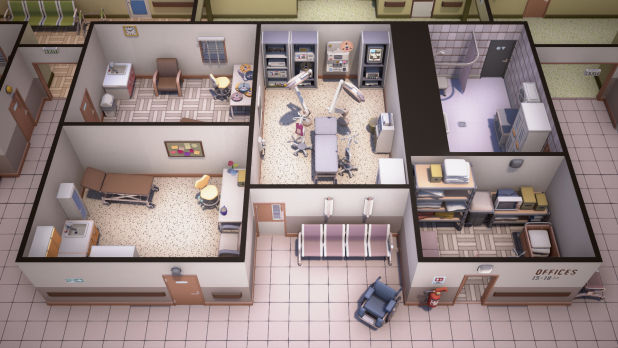 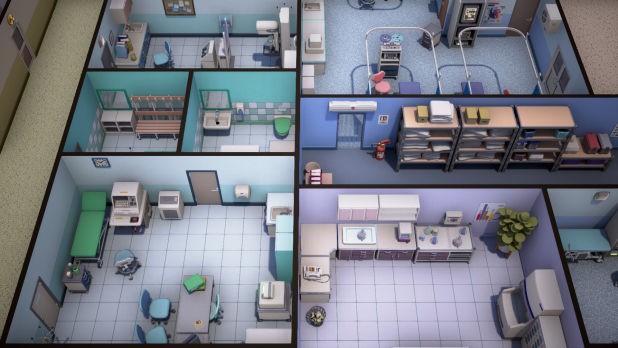 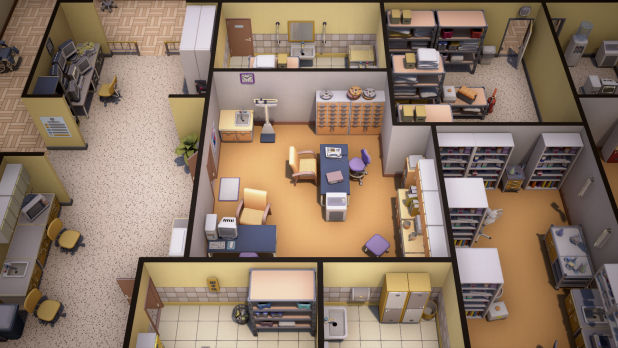 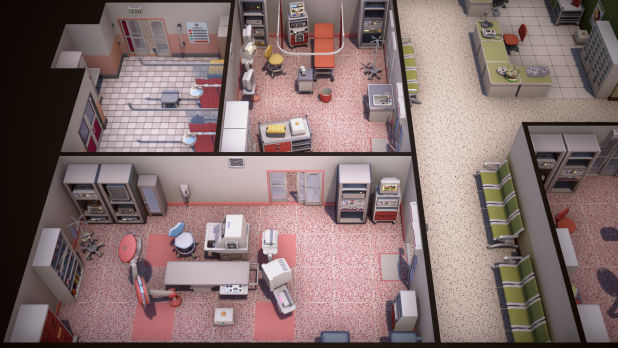 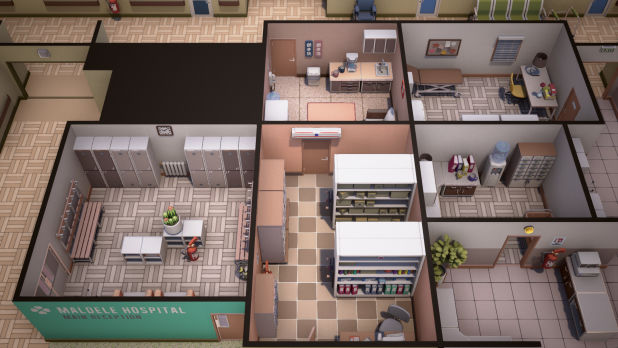 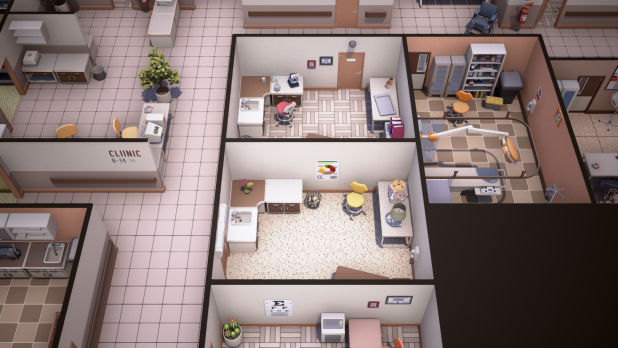 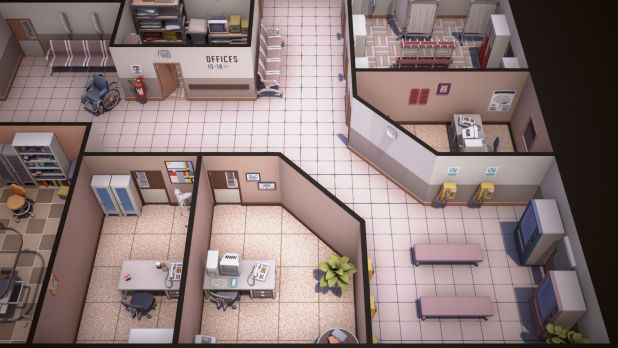 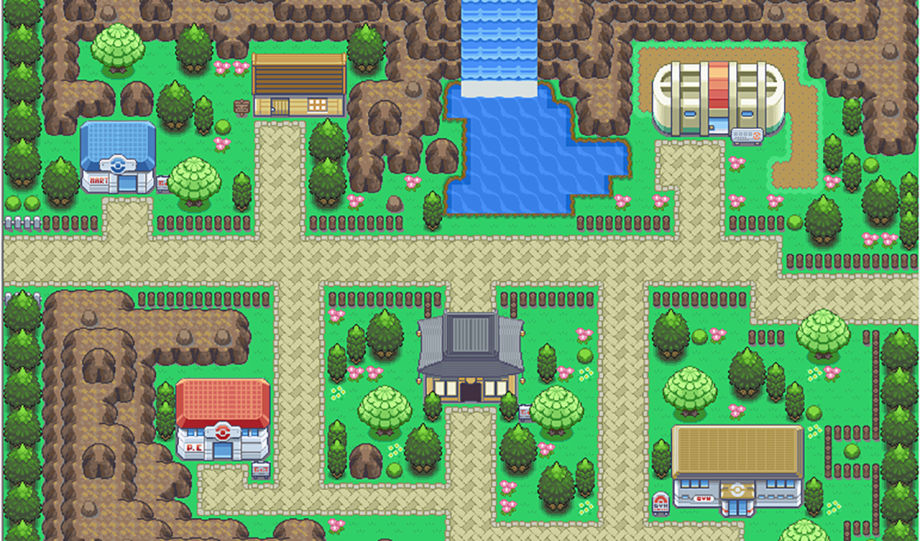 In old games the image of a rock meant that it is “a rock”, an obstacle. We had to specify everything else by ourselves. We were looking at an image and filled in all shortages using our own knowledge about rocks.

This is a really nice rock. However, it lost its symbolic meaning and become “one particular rock”, even if multiplied several times within the level. It is so precise and sharp that we could learn geology on its example. It doesn’t give us space for our own interpretation of the world of game and therefore, makes it a little bit visually intrusive.

Having the above in mind, I asked myself whether I would be able to make anything in the old style, using the old visual language typical for retro-games but in a contemporary, three-dimensional convention.

I’ve spend quite a time analysing the visual side of the old Pokemon, Theme Hospital, different works of people dealing with the pixel arts, etc. 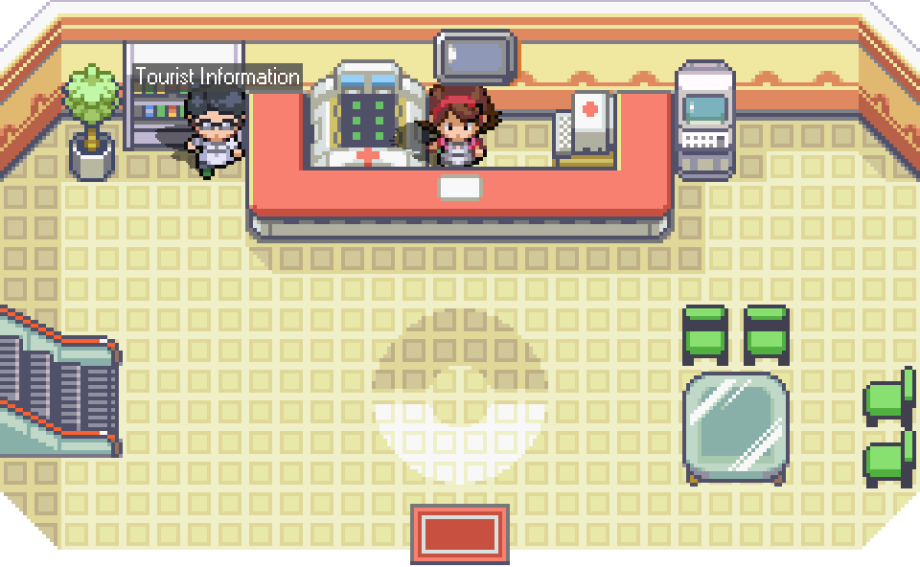 The most important for me was to gain the impression that the composition is made up of separate objects, very explicit in their structure. That’s why I have decided to use something like “maquette light” and all colour on the object were based on a simple schema – top area, neutral area, RIM.

Only after gaining this knowledge, did I choose the theme. A hospital seemed attractive to me, as it is quite diverse. Many different rooms can be found there, starting from the utility rooms up to rooms full of machines.

At the beginning I wanted to make a simple diorama with 2-3 rooms, but after the first tests I came to a conclusion that much better impression can be reached by one whole level, importantly the amount of work is only slightly bigger. 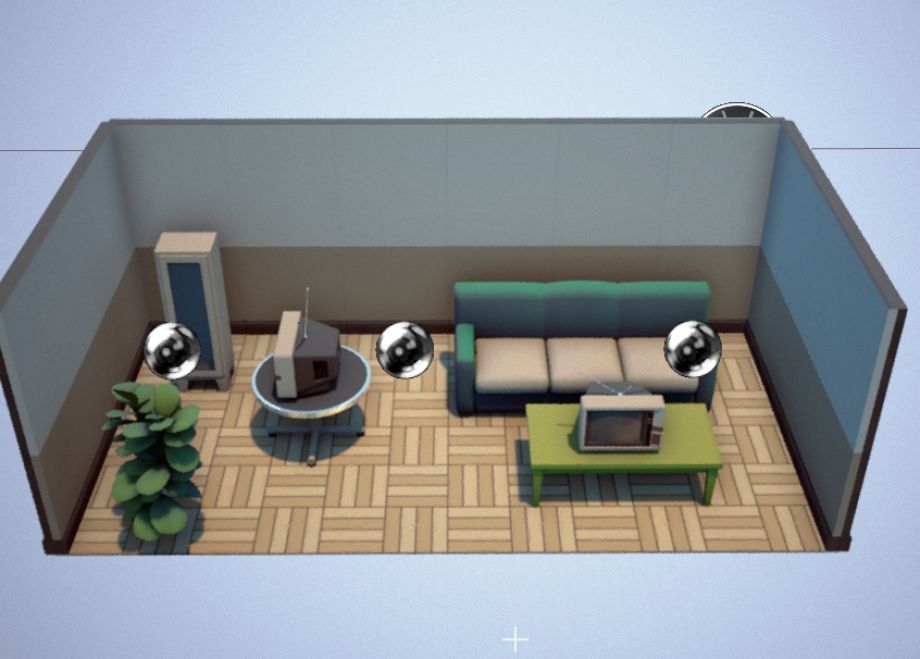 I am not an architect, so had to spend a lot of time to analyse the issue. I was looking for different hospital floor plans to finally choose the one that is most appropriate to my assumptions. That was obviously just the beginning. I had to remove the unattractive rooms and change the layout of others, to make the space more game-like (visual and constructional changes had to be implemented so to adjust it to gameplay standards).

Once I knew the layout and number of rooms, I started collecting references to each of them. I was examining machines, decorations and props to finally choose the ones that are most iconic for a particular part of the hospital. The last stage was to divide the references into separate objects. Then, I could start the work.

The whole planning process took about 1.5 month (and I am talking about free time after work).

This is large level. Initially, I was looking for the dimension on the blackout of the whole room modeled in a 3D software.

Thanks to that I was able to tell the size of the module, room, etc. Later on I started thinking about tools that would help me in correcting the whole part while the work flow. Doing it manually was out of question.

Therefore, I started cooperation with a friend, and a programmer, Maciek Pryc (a real magician in the UE4). In just two weeks we were able to create something that allows to generate walls and adjust their style (colour) on the base of texture. Really, I can’t imagine working without this generator. 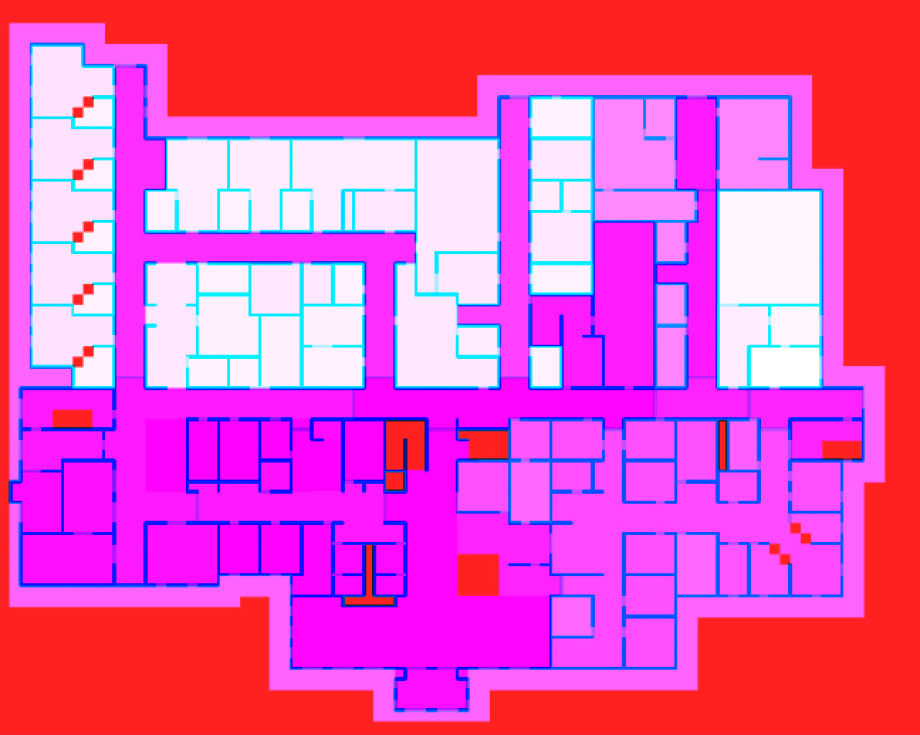 The assets were adjusted to the grid (which was set by the graphic style and walls’ modularity). The most problematic part was to create a walls’ light map, so that it wouldn’t have any seams.

But seriously, it was quite a challenge to get roughly the same level of details on all assets. It’s not perfect, but good enough not to be disruptive.

If anyone plans such a project, I would suggest making one or two more complicated reference models and adjust the rest to those ones.

I’ve been working on materials for some time now. The initial tests were carried out long before I started working on the hospital. However, it was only this area that gave me the possibility to check them on bigger scale. Using generated gradients, I almost didn’t have to do any textures (apart from the floor panels, posters, etc.)

The base for colour setting was the palette from retro games. It was obviously only the base, later on everything had to be highly modified. 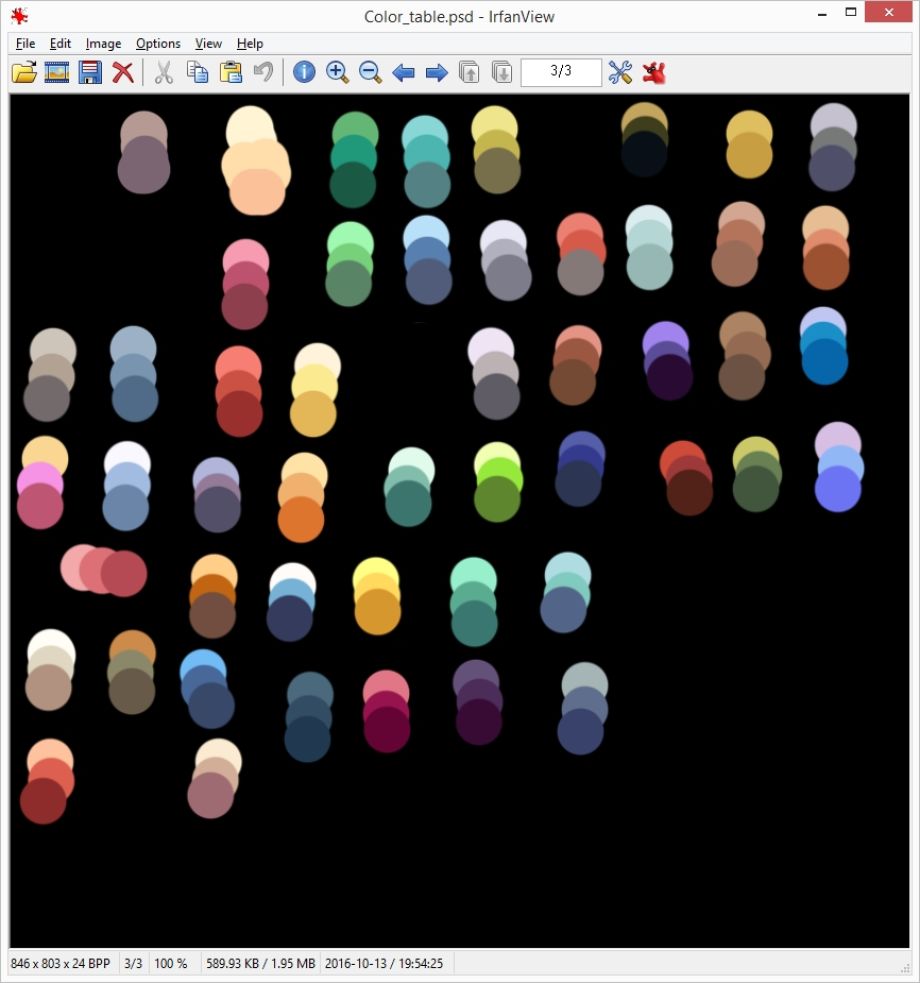 As for the colour sections of the hospital, there is a simple trick of how to distinguish few, quite similar areas. I was working mainly on textile instances and considerable amount of MatID slots, so managing colours was quite simple.

Would this scene work as a place for a game? Is it complicated to build these complex vast miniaturized environments?

Of course! From the production point of view, everything is created surprisingly quickly. This type of assets do not require a lot of time, lighting can be set only once and materials are easy to correct.

The biggest problem here is not the time but the design, creating something interesting and catchy. In my hospital interior is quite repetitive, there is no point at which it stays in our memory. 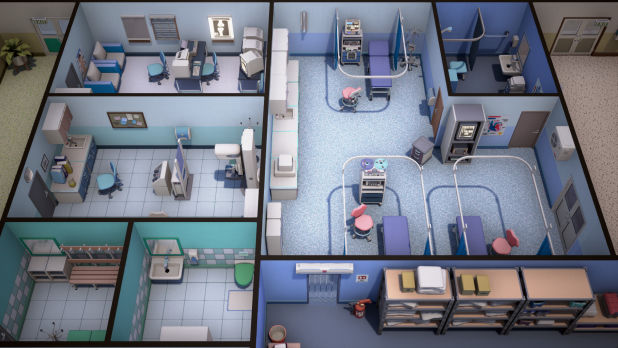 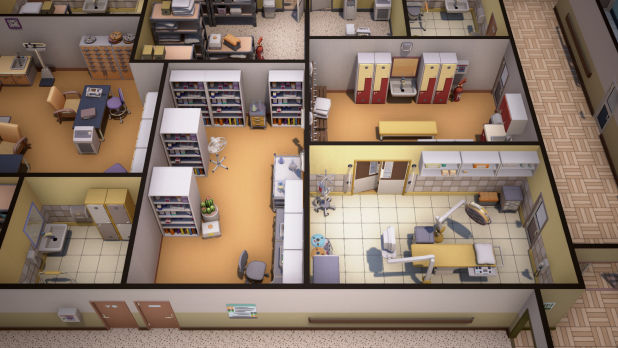 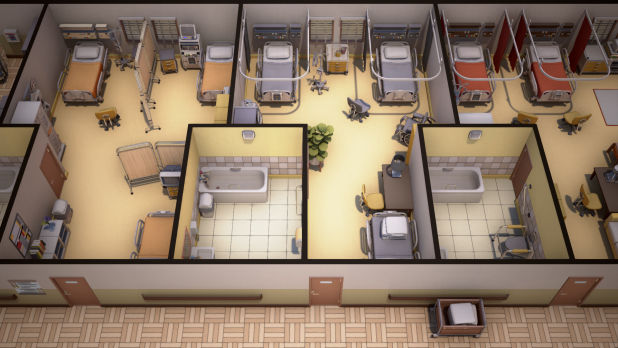 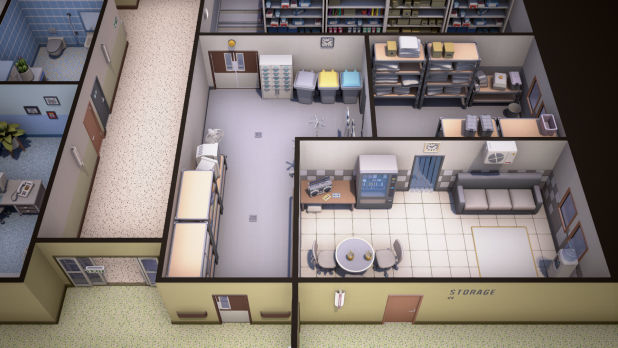 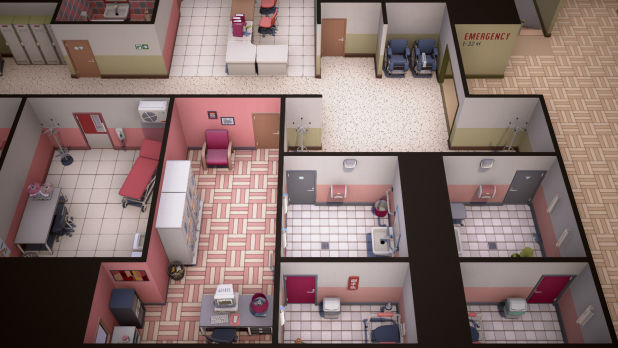 Still, I’m quite happy. I’ve managed to get what I wanted. Few people asked whether I was going to create any game out of it, but I think that the topic is exhausted and it’s time to implement some new ideas which have been shaping in my head for some time.