EVP Unity Labs Sylvio Drouin talked about virtual reality, the possible winners of 2016 VR-fight and shared his thoughts about UE4.

Sylvio Drouin is sitting in a big hotel room in an even bigger hotel, overlooking the iconic Hollywood Hills. While talking about his work with Unity Labs he’s not afraid to juggle numbers, give some very bold statements and talk about the future of VR, the kind of future that goes beyond games, Hollywood & Minority Report.

It’s hard to grasp what can you actually do with virtual reality right now. During Vision Summit 2016 we’ve seen a fair share of various projects, interactive and not, but few of them had a clear understating of where to go and what do do next. So far, there’s more questions than answers, but Unity believes it’s all a matter of time. 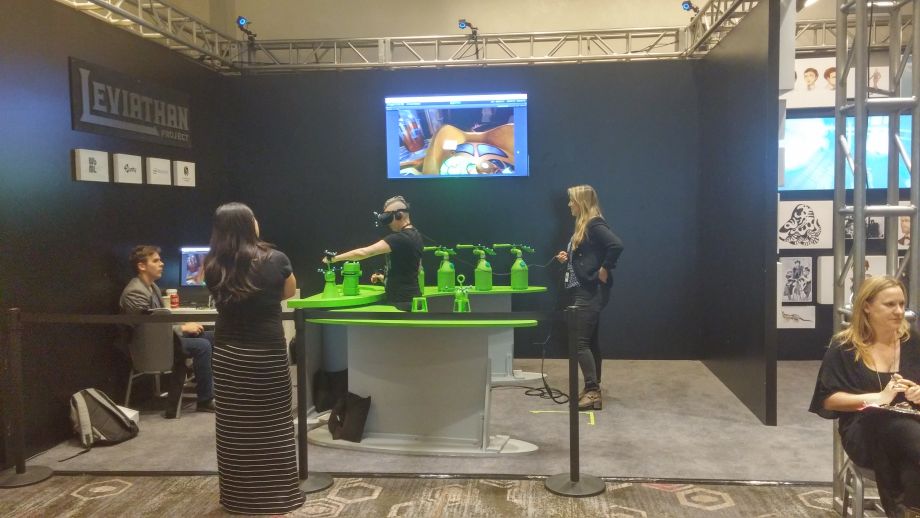 Sylvio Drouin: VR is very young. We’re all still learning what it means. What is the language we’ll have to create to tell out own stories in the virtual world? We believe, that at this stage it’s important to bring people together and talk about it. The main goal of Vision Summit was to bring the community together and discuss how we can work together.

I still need to see people spending more than 15 minutes in the headset. People either are getting sick or get their eyes tired. What is the content that will be so engaging that you will spend an hour or two hours in VR? I haven’t seen that yet. For now the most time I’ve spent in VR was with the VRChat. I stayed over 47 minutes in this environment. But in the end I was sweaty and tired and had to sleep for 12 hours after.

While having our trip along the VR-environments we were amazed by the amount of new worlds we were able to visit. Unfortunately those visits were incredibly brief. It’s hard to stay in VR for a long time. There are a ton of purely physical and content restrictions.

It all reminded the way we communicate with mobile games now. The sessions are getting shorter and the attention span of the user is getting incredibly small. Drouin is reluctant to see this similarity, he believes that VR is a different story and it’s hard to say how it will influence the average game session 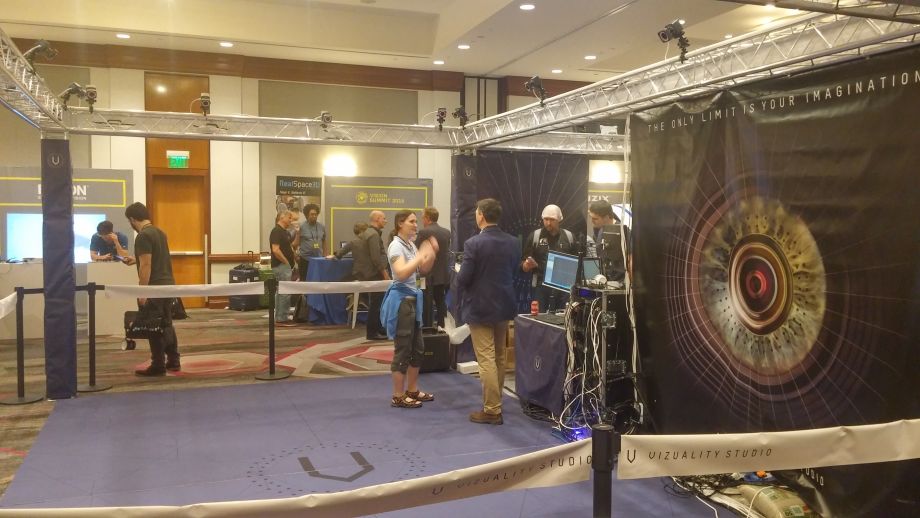 Sylvio Drouin: It’s hard to say whether VR will follow the same path as the mobile games in terms of the session duration. Phones are very different. Mobile games it’s such an impulse thing. You just pick it up and play. With VR it’s much more complicated: you need to plug it in, put on the headset, plus you need to fiddle with the installation. Have you ever tried to install Vive? It’s not easy. And we’re the technology people here. But imagine a common person trying to do something as complicated.

For now this is impossible to install these things in New-York, Tokyo, Paris, because all the apartments here are way too small. People literally do not have enough space. There’s no room to install a VR-device in those big cities. To enjoy Vive you’ll need a suburban house with a dedicated room. You’ll need to buy a bulk-up PC. It’s a $6k investment. So obviously VR is not there yet. 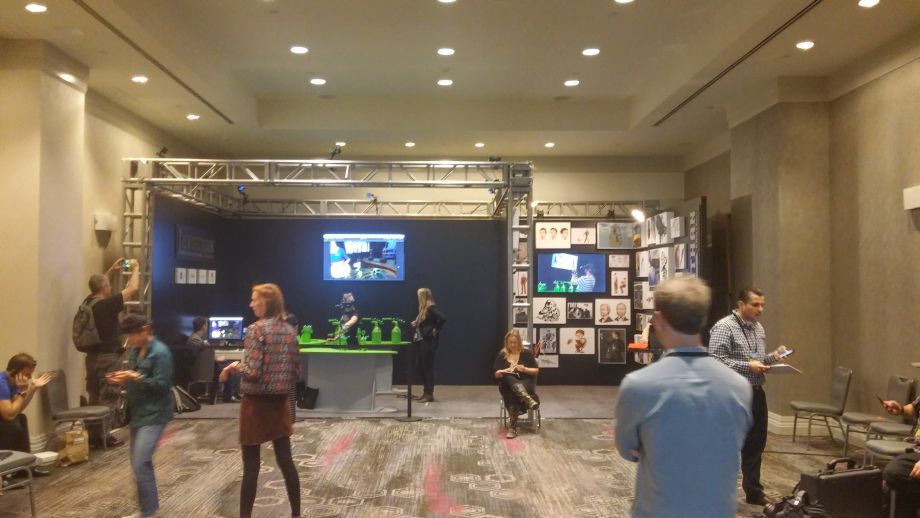 Yet, there are a number of companies, working on mobile VR. But it’s still very different from what you might expect from “normal” VR. It’s not the same impulse as a usual mobile user has. So before we start to think about the sessions, there’s still a work to be done about the form factor, about the technology. When all those things will in place I’ll be able to switch on as impulsively as possible.

With so many companies working with VR and especially VR-hardware you couldn’t help but wonder, what pushes all those big players like Valve, HTC, Facebook and Samsung into the uncharted waters. What do they want to get from this relatively small market of VR-geeks? In Silvio’s words the fight is not for the early adopters, but for the big consumer market, with 500 million users. 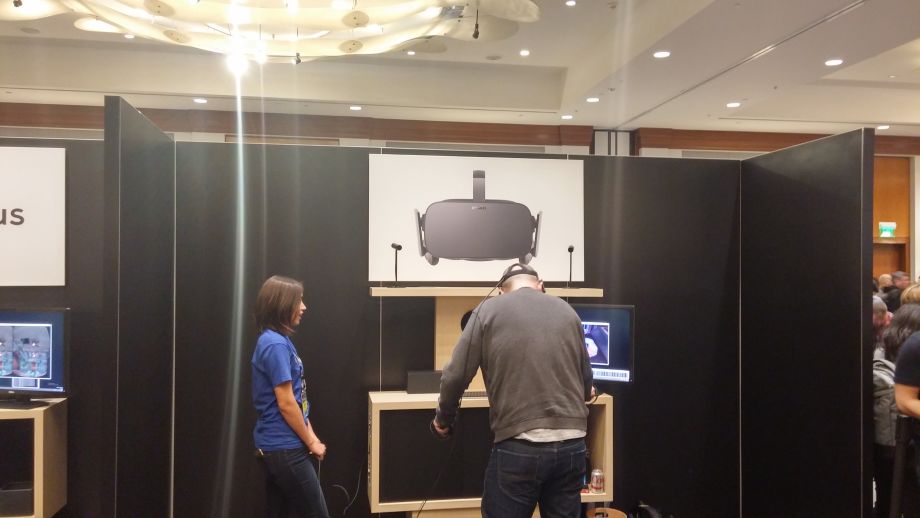 However, the most interesting thing is the main motivation of those companies. It goes far beyond games and entertainment.

Sylvio Drouin: Why do you think Facebook bought Oculus? It’s because they want to earn your memories. They want to own your moment. As much as we use Facebook or any other social network, these platforms evoke emotions, show new ways to connect with people. At first it was just simple connection with an old friend, then it was sharing of various pictures with your friends and now you’ll be able to become a part of your friend’s moment.

You could easily appear at your friend’s kid’s birthday, at your friend’s bachelor party. You’ll be there. Facebook and Oculus (and other companies) will be able to connect with the user on a completely new, deeper level. And people will stay with them forever, to share new amazing moments. And they will be able to serve them ads. That’s why this market is so segmented. Google wants a part of it, Facebook wants a part of it, Magic Leap wants a part of it. It’s big long-term business. The real goal is not just to make VR as a game platform, it’s much bigger. VR wants to own a piece of people’s lives. 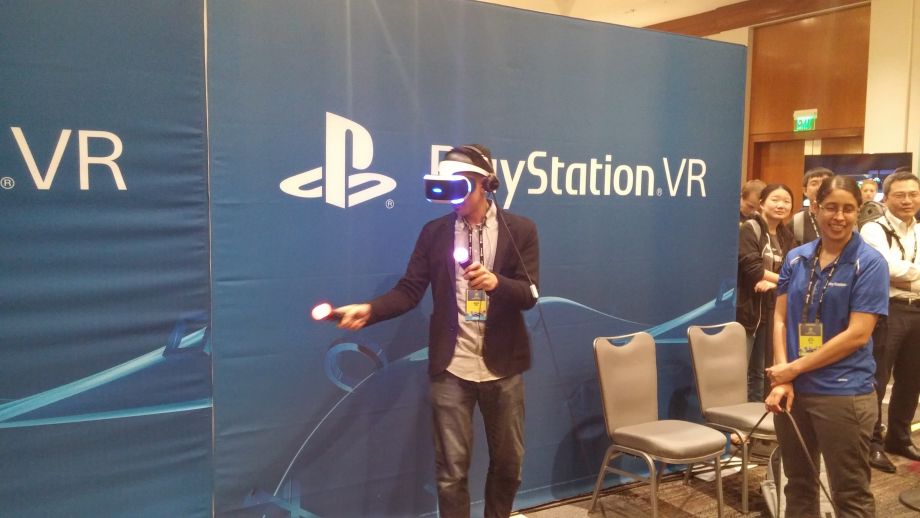 The potential here is huge. With VR, companies can gather so much more information about the person. Oculus does incredible testing. They know when you cry, they know what sort of mood you are in, they know how do you cry (cause there’s a difference depending on where your tears flow. It’s a ridiculously huge amount of information. And they are going to get even more info when the time comes. It’s kind of scary – like Minority Report.

And while it’s still not clear, who’s going to be the main winner in this fight, you can definitely tell that developers are not getting their “fuck you” money anytime soon. There market seems to be very early in its development. 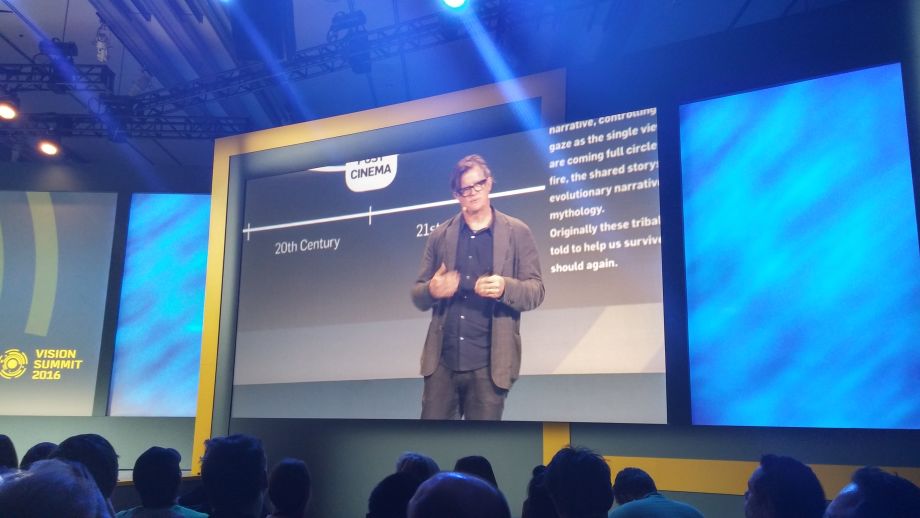 Sylvio Drouin: I don’t think that the developer will be winning in 2016. The companies are going to ship a certain number of devices and only the early pioneer adopters are going to grab some of them. There’s not a lot of people, who are willing to give $5k for a PC to run VR-experiences. I believe, that Sony, of all companies, had the best chance to succeed this year. PS4 is already there and it’s cheap. PS VR may actually become the biggest winner here. I would not be surprised for sure.

VR is in flux right now and it’s going to stay in flux for the next 5 years. There are difficulties not only with the hardware interface, but there are also problems with the interface inside the actual VR-experience. There’s language to tell a story, the one people use to make a film. But the language for VR has not been created yet. In Unity Labs we’re searching for it, working with VR Scene Editor, experimenting with tons of UI-mechanisms. We need to try and research what will work.

I believe, you’ll see a lot of changes in this field in the next couple of years. Massive changes.

One of the possible changes might be connected with way VR will become a huge part of the creative environment. This technology is already attracting hundreds of artists from game industry, film industry and special effects. They are desperately looking for new ways to communicate with this medium and find new opportunities to tell stories. That’s why Unity and other big companies (Epic Games in particular) are building their own set of tools which will help to create content directly in VR. 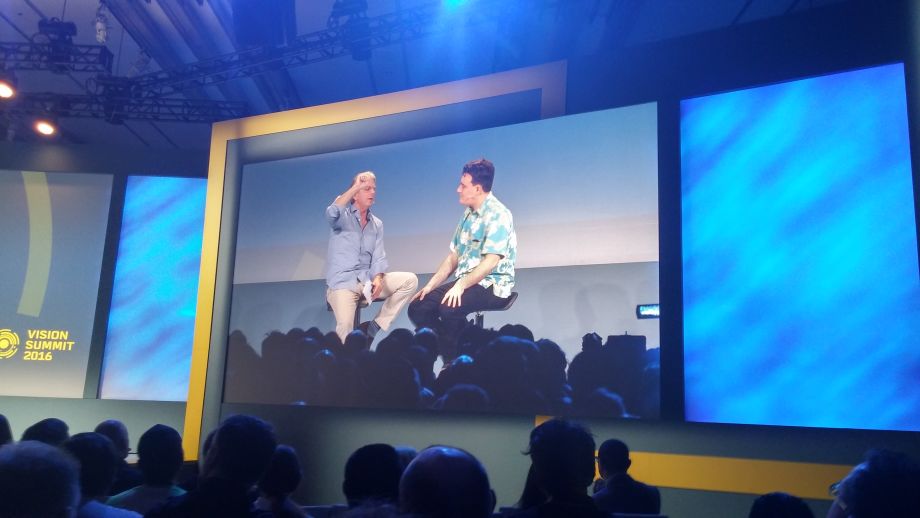 Sylvio Drouin: We’re working on a number of projects. VR scene editor is just one part of the puzzle. We’re also working on a consumer authoring tool. It’s kind of a new way to build things in VR. Basically you have an asset store with lots of content and we have a table, which works as a user interface. Because we don’t think people are going to spend two hours working in VR. Especially if we’re talking about an unprepared, casual user. In this editor you can really start developing the scene from the very start in VR. There’s going to be an AI-system, which can help you build things faster, by choosing what to build with your voice. It’s like Minecraft with Unity assets. It’s super easy and very accessible. This technology as long with all those other efforts can help the users to build more amazing content.

At GDC we’re also going to present another huge tool, which can potentially change the way we approach storytelling in virtual reality. You can easily create a sequence and create your own little Pixar film with some interaction. In the end you’ll have an amazing VR-experience, which you can potentially stream from the web. With this technology, you’re not going to code anything and you’ll have incredible tools available for people from all over the world to work with. 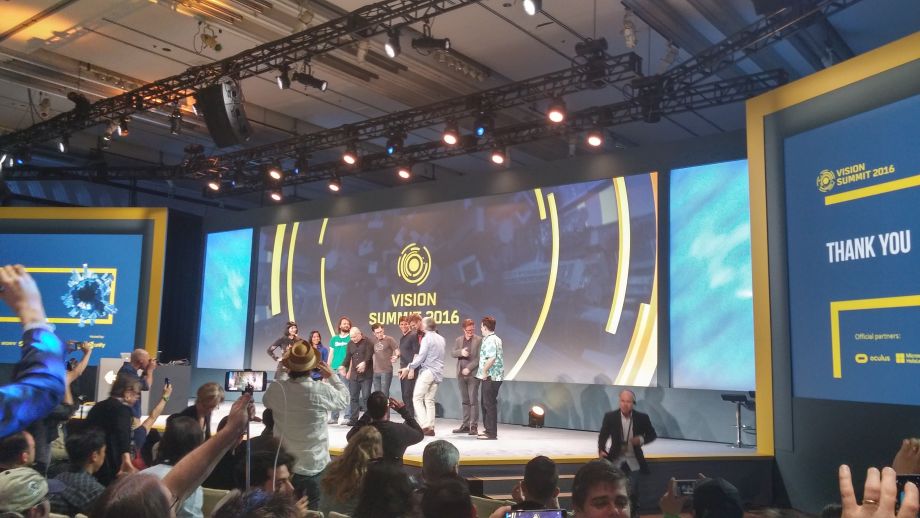 VR is particular interesting for artists. Artists really want to use this technology to express themselves. An artist cannot just star writing their own project for PlayStation 4. It’s too demanding. It’s too much work and too much coding. However they can start doing with VR. You probably saw TiltBrush and Oculus Medium. From the artists standpoint there’s a huge potential in this technology. We want to help them and give that artists a story-telling tool, which will help to create interactive experiences, without learning how to code.

The Competition with Unreal Engine

Of course, while talking about the production of new tools for virtual reality creative teams, we couldn’t mention the previous announcement made by Unreal Engine. As a true diplomat and seasoned manager, Sylvio Drouin does not see companies competing. Instead, he thinks that Unity and Epic are taking completely different paths. He even drew a small diagram, showing how these two engines co-exist on the market.

Sylvio Drouin: Unreal Engine is going very specific. They have a super high quality tech, very good rendering and everybody knows that. And we at Unity Technologies actually agree with all that. On the other hand Unity has a platform, the openness to so many more users. And we are going to carry on doing that in VR. 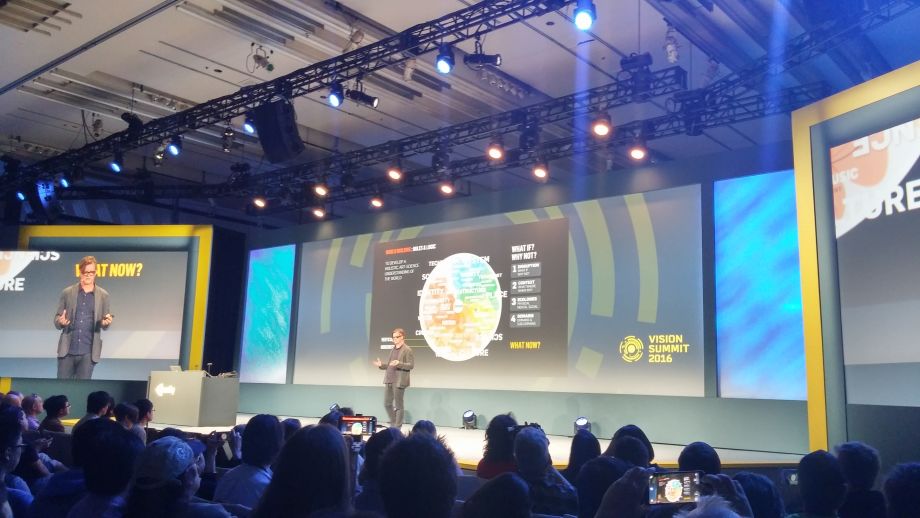 Virtual reality is obviously here to stay. If you had your doubts, it’s better to throw them away. While it’s not clear when exactly will we see the project that will make everyone buy an Oculus, HTC VIVE or God know what else, this day will definitely come. And we’re sure Unity Technologies and Sylvio Drouin will open more than one bottle of champaign when it happens.