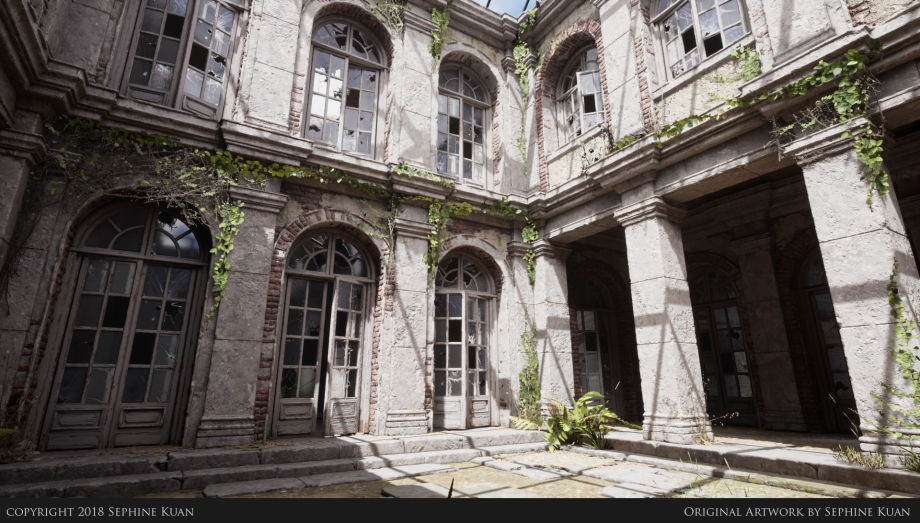 Hello, I’m Sephine! I was born in Malaysia then immigrated to Vancouver, Canada when I was a teenager. Ever since I was a child, I loved to sketch realistic drawings of various subjects like birds and flowers. I studied Business Administration at Simon Fraser University but later on decided to pursue my real passion for visual arts.

I took a 3D modeling program at Vancouver Film School. Upon graduating from film school, I was recruited as a 3D artist at Mainframe Entertainment, a TV animation studio located in Vancouver. At Mainframe, I was fortunate enough to work on several TV shows such as Reboot and DVD movies (Casper, Barbie). After 3 years at Mainframe, I accepted a 3D artist position at Electronic Arts Canada (EA) in Burnaby, BC. During my 7 years at EA, I had worked on several game franchises such as SSX, Skate and NBA Street. At EA, I had taken on various artist roles as a Sr. Character Artist, Sr. Environment Artist, Texture Artist, and Lighting Artist. In 2010, I left EA for Capcom Vancouver (formerly Blue Castle Games) to work as a Sr. Environment Artist on the Dead Rising franchise until mid-2018.  Presently, I am heading back to EA this December 2018.

Storytelling in the Environment

A great story is the most important element in any piece of artwork. Telling this story effectively through the artwork turns it into a masterpiece and this is the approach I take when I craft an environment. 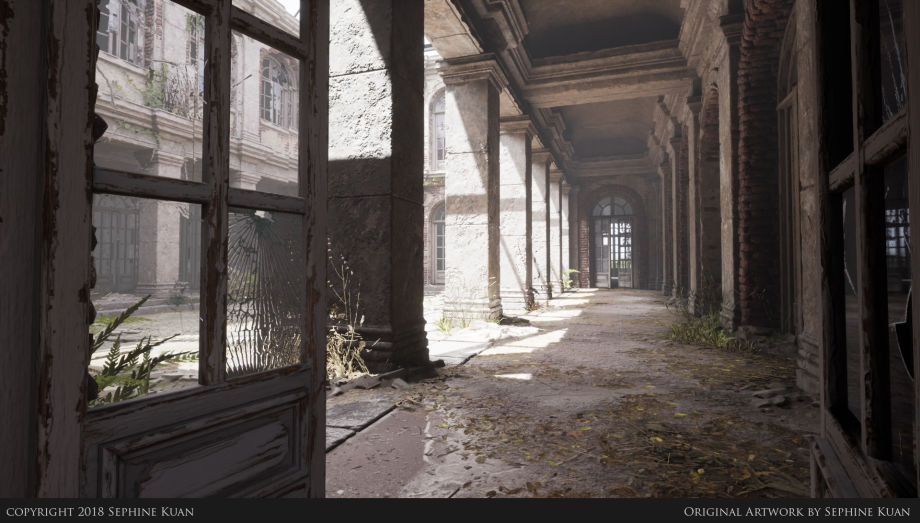 I would first come up with the theme of what I would like to show. In the case of my piece, The Abandoned Palace Courtyard, I wanted to convey the nostalgia of a place that was once grand, ruined through war and decayed through time. I researched and collected numerous photographs of abandoned castles, hotels and plazas. Some of these abandoned places were actually used as soldier encampments in World War II, which provided a strong fictional narrative for this project.

Then I took mental notes of the most striking elements that conveyed that theme of grand luxury (classical architecture with imposing columns, arched windows, stone trims, plastered brick walls). I also took mental notes of what elements needed extra detail to convey the theme of decay (broken plaster, peeling paint, cracked and broken glass) and nature taking over (wild grass and ivy). With these notes in mind, I had a direction of how I needed to sculpt the window frames, brick, stonework, columns, and trims.  I also used these notes to guide how I wanted to generate the textures and blend the materials. Finally, these notes also helped in how I wanted to compose the space, placing where the debris should be, where the grass and ivy should grow, even why there’s a hole in the ceiling. 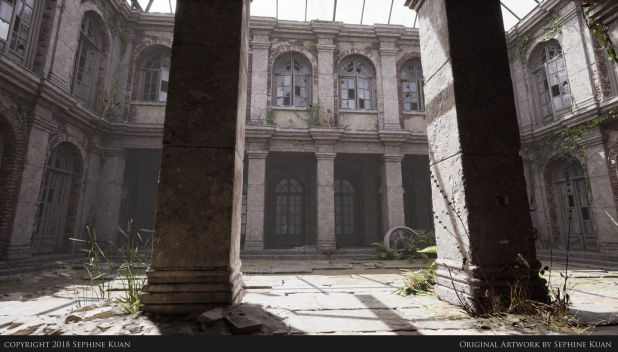 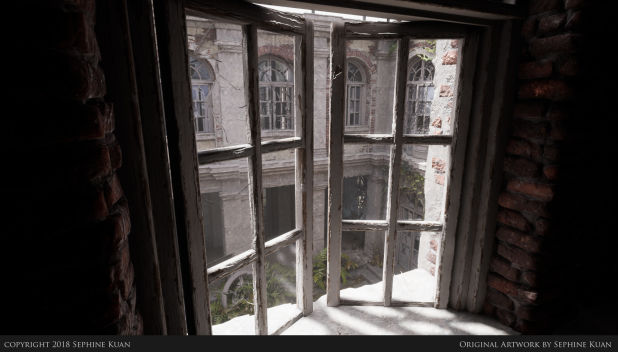 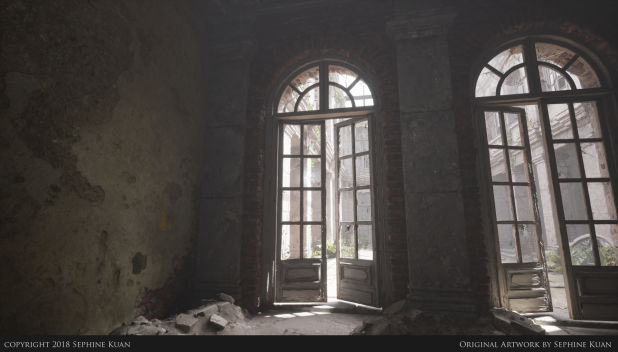 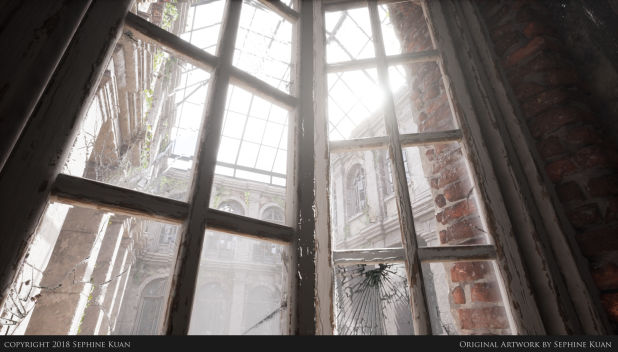 The most efficient way to undertake such an ambitious environment is to utilize the modular approach. After studying my reference photos, I listed down what main pieces (windows, doors, columns, floors, brick walls, trims) I would need to model and sculpt to give me the basic architectural structure of the courtyard.  Then I proceeded to come up with different combinations and arrangements of these modular pieces together to see how they fit and how I can reuse each piece in different ways. It’s a lot of experimentation, but the process was definitely worth it because, in the end, I was able to get the minimum number of pieces needed to create the space I wanted. After the space had been blocked out, I moved on to sculpt in the fine details. 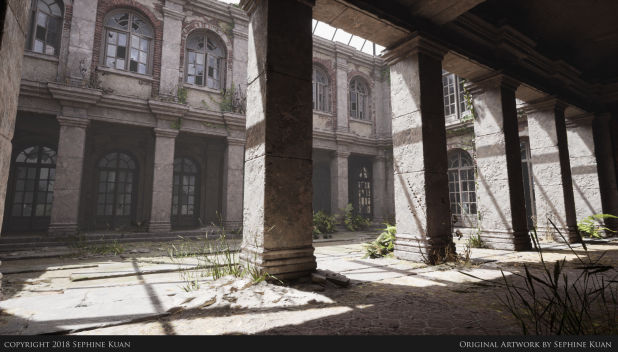 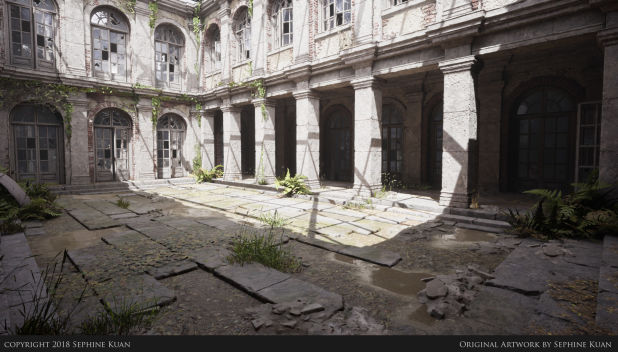 As mentioned previously, by choosing the modular approach and with a lot of experimentation on how I combined the modular pieces together, I found the minimum number of base models needed to create the courtyard.  This allowed me to streamline what pieces needed high-resolution sculpting for fine details. If I had sculpted everything before laying out the courtyard modularly, I could have potentially wasted time on sculpts for models that I may not have used. After determining the base models that needed sculpts, I brought them into ZBrush and started subdividing and sculpting to generate my high-resolution meshes. Using the high-to-low resolution baking process, the height maps, normal maps, and curvature maps were generated. I used these for my texture and material blending. 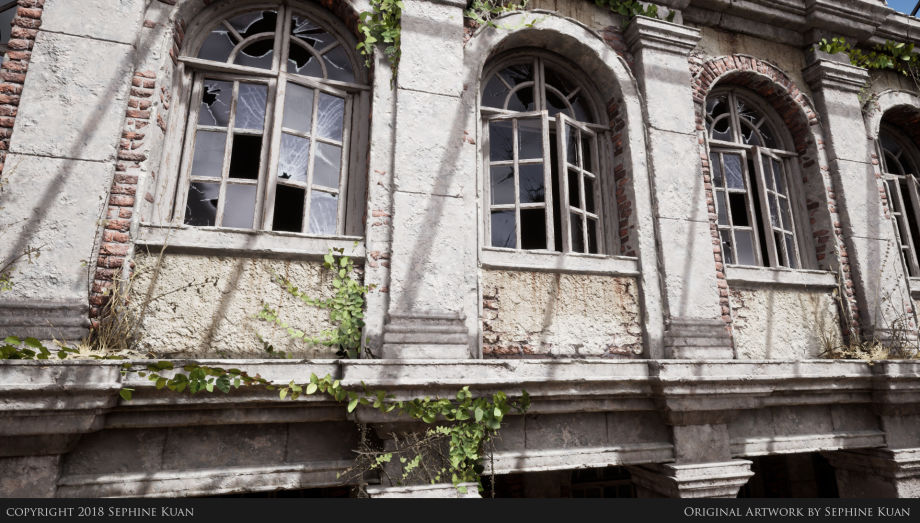 I paid particular attention to the aged paint by actually sculpting in the bumps and crevices of the peeled paint in ZBrush. The resulting height map from this sculpt allowed me to blend in the paint, stains, wood grain, scratches, and dirt textures in Substance Painter.  This results in uniquely composited albedo, roughness and normal maps for the windows.  Paying close attention to my photographic reference gave me clear targets to shoot for. One thing to note about my textures is that although I had generated height maps, I did not use them for displaced tesselation because I wanted the base models to be game-performant. 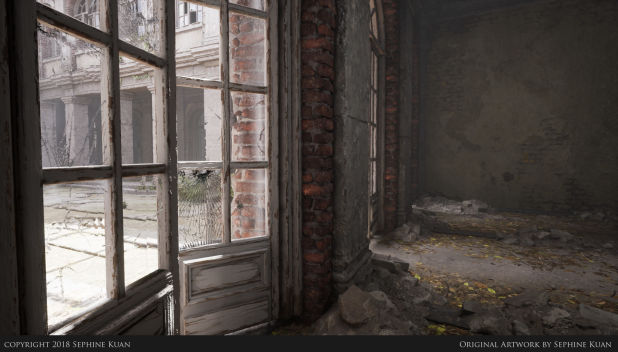 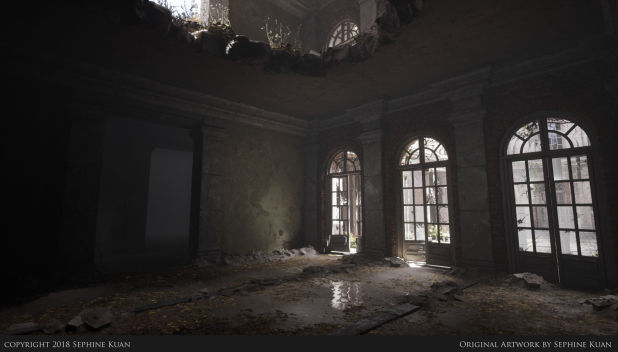 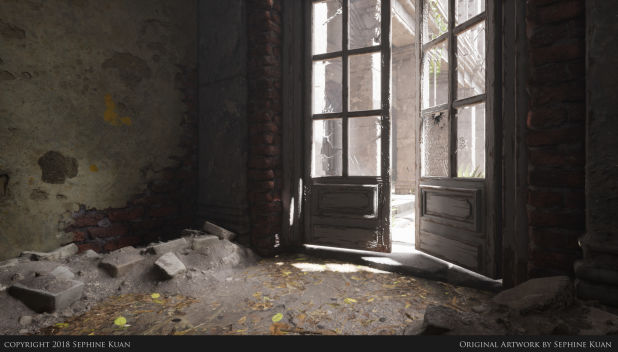 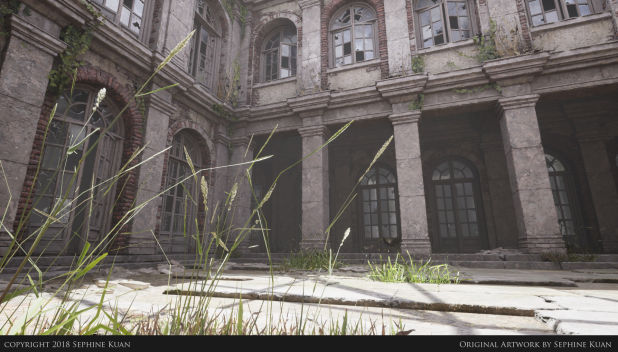 I use a layered material approach to the larger modular pieces such as the walls and floors. This means that the wall surfaces has several material layers containing different textures for plaster, brick, concrete, dirt. To blend these together I used different vertex channels (RGBA) to paint in grayscale masks that work in combination with the height maps of each layer to determine how much each layer is showing through.  This flexibility gave me a lot of control over the final look of the materials. Also, since each material layer was PBR-compliant, the layered material was also PBR-compliant and responded very predictably to the lighting. 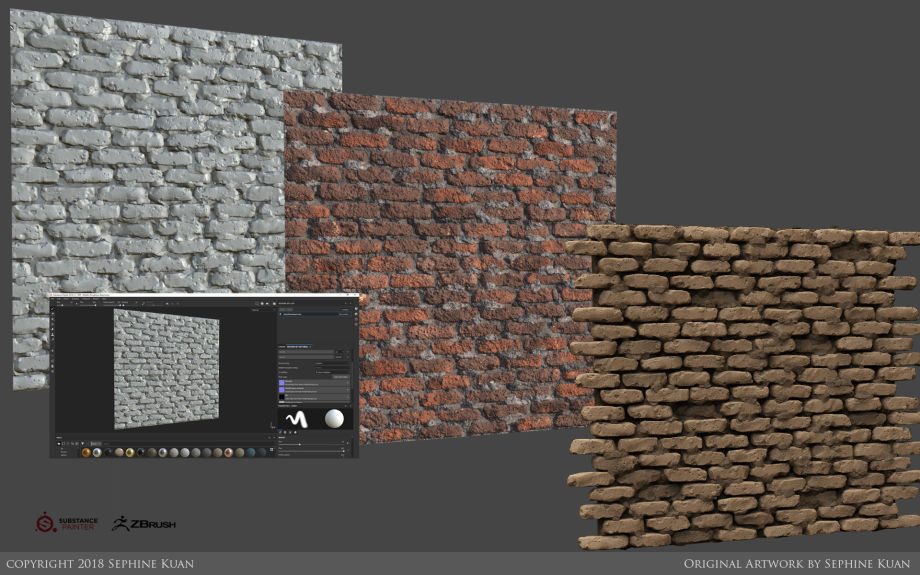 When working on lighting, I did lots and lots of experimentation with the directional light intensity, UE4‘s lightmass settings, and camera exposure settings.  I spent a lot of time iterating on the light settings and baking to get the right amount of global illumination. There is some minimal exponential height fog. To stay true to the textures’ colour I decided not to add any sort of colour-grading. Rembrandt portrait photographic lighting is the aim I was going for  because I wanted to create a sense of nostalgia. Lighting design is very important to composing an environment set. In one case, I wanted to introduce a bit more sunlight into a room, so I broke a hole through the ceiling, which also matched well with the war-torn narrative. 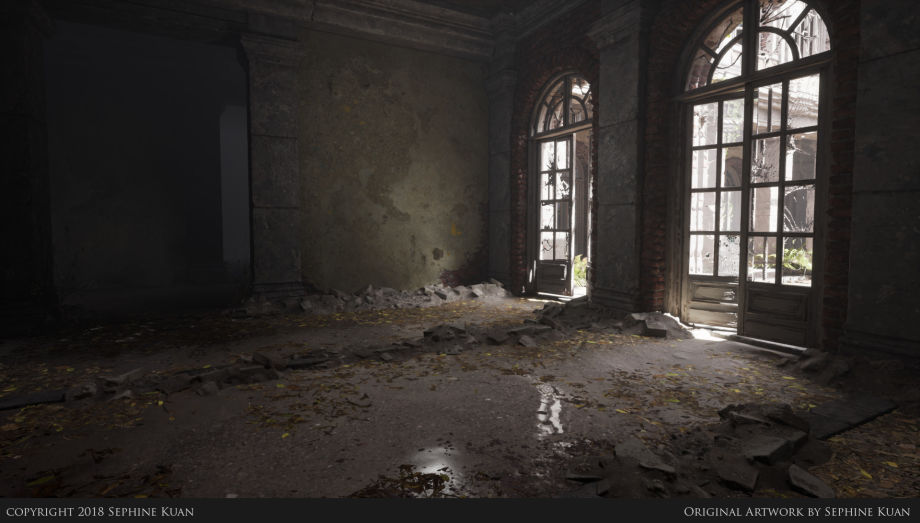 The foliage (grass, ivy) are Megascans assets from Quixel. I had set a goal for myself to work on this project during the summer, but I was running out of time. I wanted to model the foliage by hand but decided that in the interest of saving time and energy, Megascans was the best choice. I had also used a couple of Megascan textures for the ground that I further altered to suit the scene. Megascans are a great resource and time-saver thanks to Quixel. However, for objects that were eye-level to the camera which I felt needed focus, I chose to create textures for them through sculpted information. In my sculpts, I exaggerated certain details in order to produce heightmaps that made the material and texture blending respond better to the lighting I had set. This close attention to sculpted detail provides the artistic touch that brings the materials to life. I guess you could say that is my way of breaking through the “uncanny valley” of digital environment art. 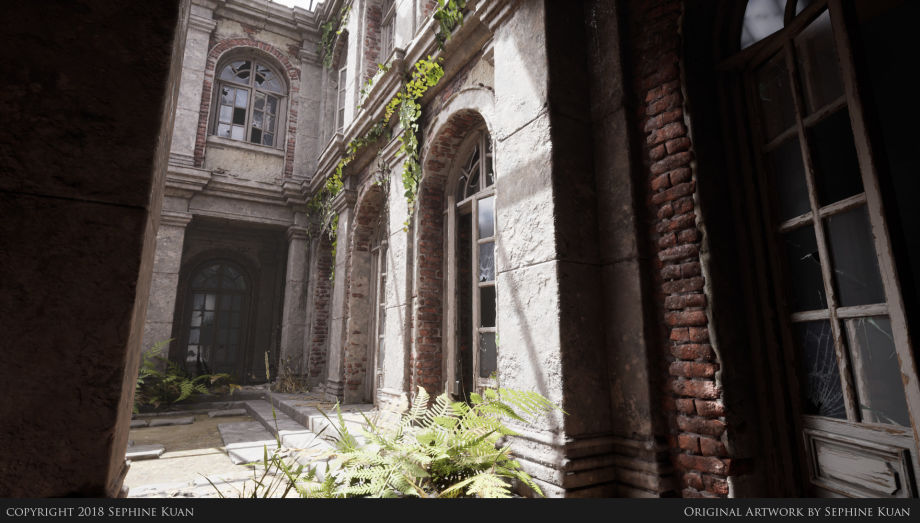 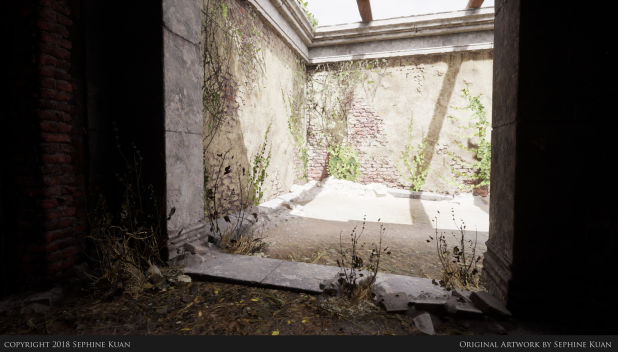 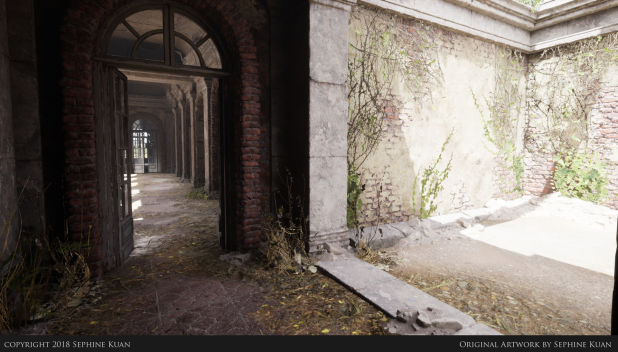 Here’s my advice for game developers who want to understand environment art: observe what story the environment is trying to tell. Is the environment successful in telling you that story in its composition, its details? My advice for aspiring environment artists. Keep working on your craft. Never be satisfied, stay humble, and be open-minded to learning new things. Pay attention to details. A good way to learn in my experience is by observing what others have done. If you aspire to further your craft in photorealism, study photography and watch movies with award-winning cinematography. A lot of techniques about lighting design and scene composition can be learned just by observing.