My name is Natacha Nielsen. I’m from California, and I currently work as a character artist on World of Warcraft. I’ve worked on several different student game projects in the past, but World of Warcraft is my first AAA game.

I grew up playing a lot of different games, and they were a massive source of inspiration when I would draw. In high school, I decided I wanted to be a concept artist for World of Warcraft since I loved the art and the story, and it was one of the games that inspired me the most to do game art. After starting at LCAD in 2013, I had my first 3D art classes, and soon after, my first texture painting class. I loved how handpainted, stylized character work really combines a lot of what I love about painting with 3D modeling. My love of hand-painted, stylized character art led me to switch my major’s focus from concept art to 3D character design. I spent a ton of time in World of Warcraft to better understand the style-language of WoW. I knew the road to Blizzard or any other AAA studio would be long, so I wanted to study as much as I could to get there. I eventually entered the World of Warcraft Student Art Contest in 2018 and was chosen as their winner in the character art category. Winning that contest put my work on people’s radar. That summer I was offered an internship as a character artist on World of Warcraft and I’ve been working there since.

With stylized characters your shapes are going to be very important: you need to have something that reads well even at a distance. One thing that I feel is important is not to get carried away with detail. If you put it everywhere, things get muddy and you lose your focal point. I usually start my character designs with some very rough sketches to figure out what exactly I want to do. I explore what kind of shapes I want to use, thinking about what the personality and body type of the character is. Once I have a sketch that I like, I will refine it and edit it as I need to and then do some color explorations. From there I will do a quick low-poly block-out in 3ds Max, then bring it into ZBrush and sculpt a high-poly model. For hand-painted characters, I generally don’t bother sculpting in every last bit of detail since I will be painting it in any way later on. 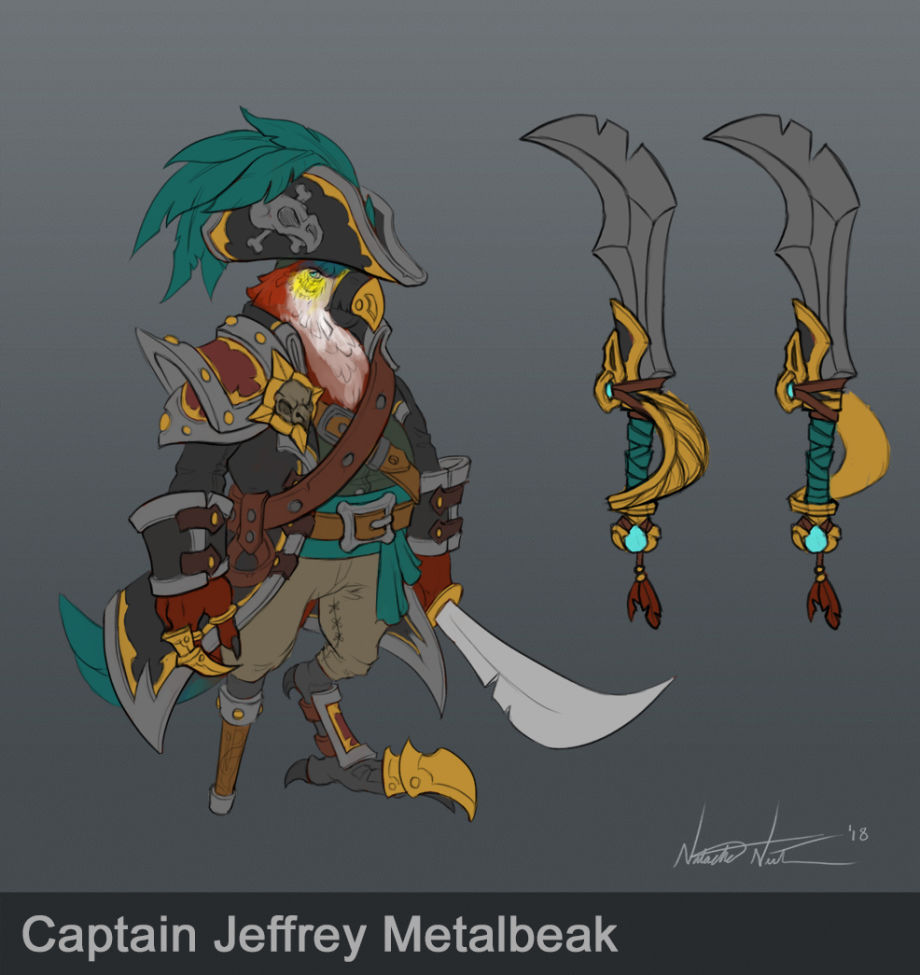 One of the big things to remember when working on stylized models is that your geometry should always be contributing to the model in a meaningful way. With hand-painted characters, I know that I will be painting in the vast majority of the surface detail, so I don’t need to give extra geometry to something that isn’t altering the silhouette. I also try to avoid straight lines as much as I can. If I see two vertices that are creating a straight line and not contributing to the overall shape, I will collapse them into one or move them so they are helpful to the silhouette.

Geometry should also be set up in such a way that it will deform properly when you hand your model off to an animator or when you go to animate or pose it yourself. 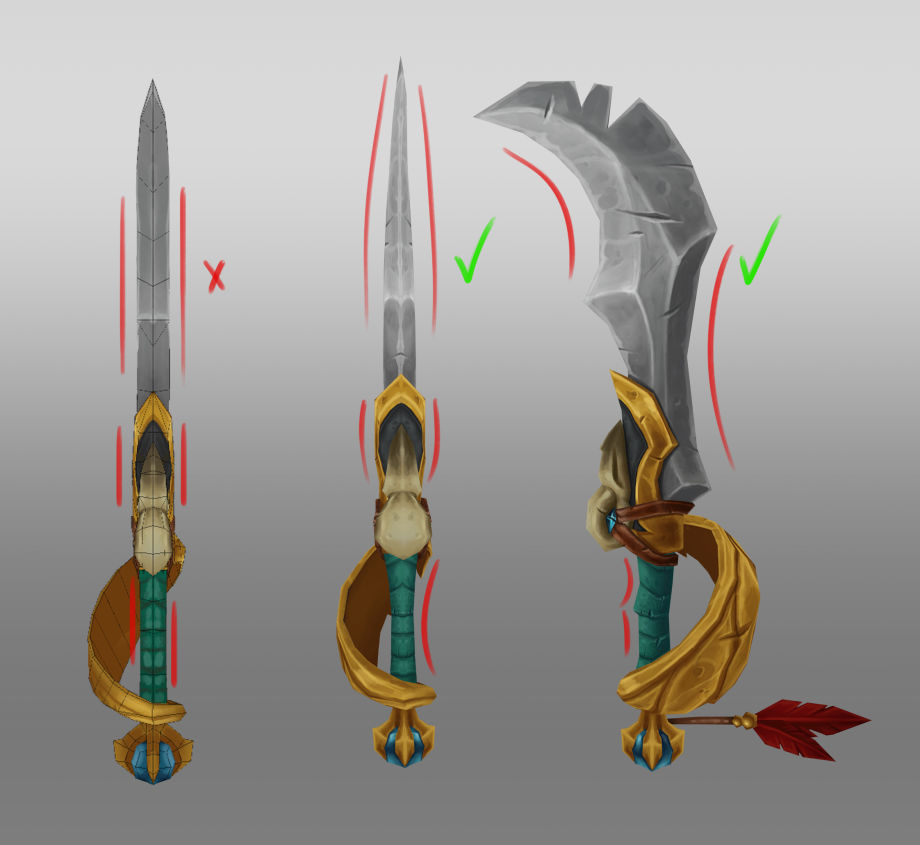 I think that the proportions, size, poly count and other stats will depend largely on what you are working on and what the engine for a game can handle. Personally, I try to optimize my characters as much as I can and aim for the kinds of requirements that I see on characters for the games I want to work on. For many of my character pieces I did for school, I tried to work within constraints given by the WoW Student Art Contest. 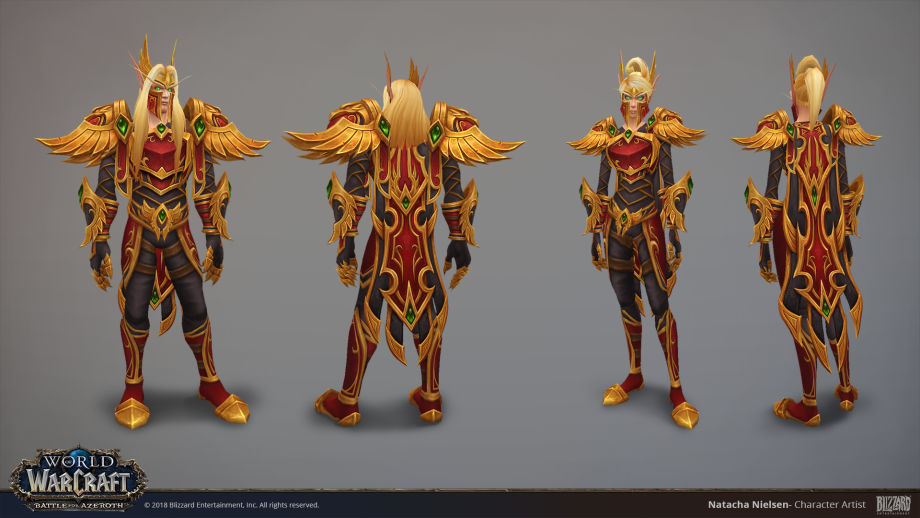 I usually do my unwrapping in 3ds Max. Occasionally I will bounce between Max and 3D-Coat, but I don’t use any extra automatic unwrapping tools. I treat unwrapping a lot like a jigsaw puzzle and try to fit things in a way that the positives of certain shapes fit the negatives of others. The end goal is to have as little wasted space as I can while putting seams in reasonable places. Occasionally, I do have to alter my UVs after I have started texturing. This is where 3D-Coat usually comes in because it has an awesome and useful UV unwrapping tool that also moves all your textures as you move or change your UV islands.

I usually do most of my texture painting in 3D-Coat and then make small adjustments in Photoshop as I work. As far as color palette goes, I try to work it out early on in my concept; that way I have an idea of how everything will look together in the end. Some color theory knowledge is extremely helpful in choosing a color scheme. A general rule I try to follow, though not always, is keeping the palette limited to 3 or 4 colors, where at least one of them is a neutral color.

To start my textures I will bake out an ambient occlusion and a bent normal map from the high-poly model (if I have one; if not, I will just use a low-poly ambient occlusion bake from 3D-Coat). From the bent normal map, I copy the green channel into my model’s texture and set the layer to soft light. I combine the high-poly AO with a low-poly AO and set the resulting layer to multiply. Then, I add a quick vertical gradient from light to dark in 3D-Coat and set it to multiply. You can play with the colors of these layers over your base color layer, or you can set the base color layer to “hard light” and throw it over the top of all these initial layers. The last layer I add is a layer filled with white or black and set to “color,” and this layer will always be the top layer of my texture file. When I turn it on, it will make everything grayscale so I can make sure all my values are working. This process is fairly quick and gives you a base and lighting guide to work on top of.

From that initial setup, it really is just a matter of painting. I block out areas quickly and then refine as I go along. Many of the principles you would apply to an illustration can definitely apply to texture painting. I keep an eye on my values as I work. If colors are clashing or not working, I check that their values aren’t too close together. My focal point will usually have lighter values and more contrast to draw the viewer’s eye to it. I also make sure that my materials are reading properly; I always keep a reference sheet open while I work to make sure things look the way they should. This sort of reference is also very helpful when I am doing a damage pass. As I add detail, I also make sure to have areas of rest and areas of more concentrated detail. If I add too much detail or noise everywhere evenly, the focal point will get lost and the piece will become difficult to look at. Throughout this process too, I will ask other artists for feedback and critique since it is always good to get a fresh set of eyes on your work. Once everything is at a point that I am happy with, I will export my texture to Photoshop, make any final adjustments, and save out the texture as a TARGA. 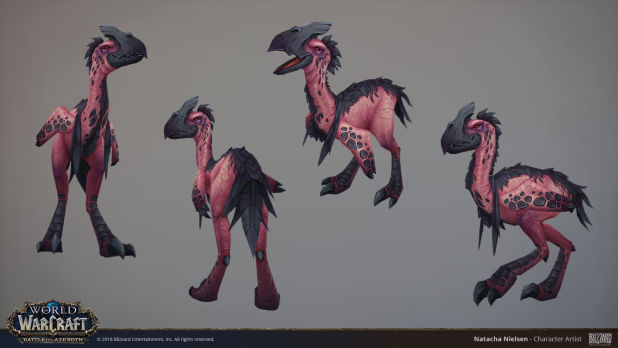 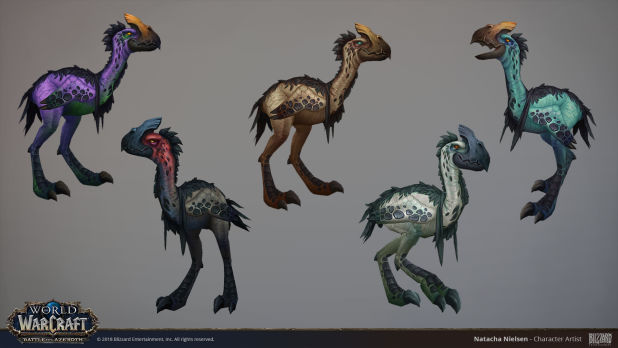 Critique and feedback are so important throughout your work. The second set of eyes can help spot things that you might not have seen. I always try to get opinions from a few different people who I know will give me solid, honest feedback. For my personal checklist, I want a model that has:

Once I have the model ready to present, I use Marmoset to take screenshots, and if the model is hand painted, I have the lighting set to “unlit.” 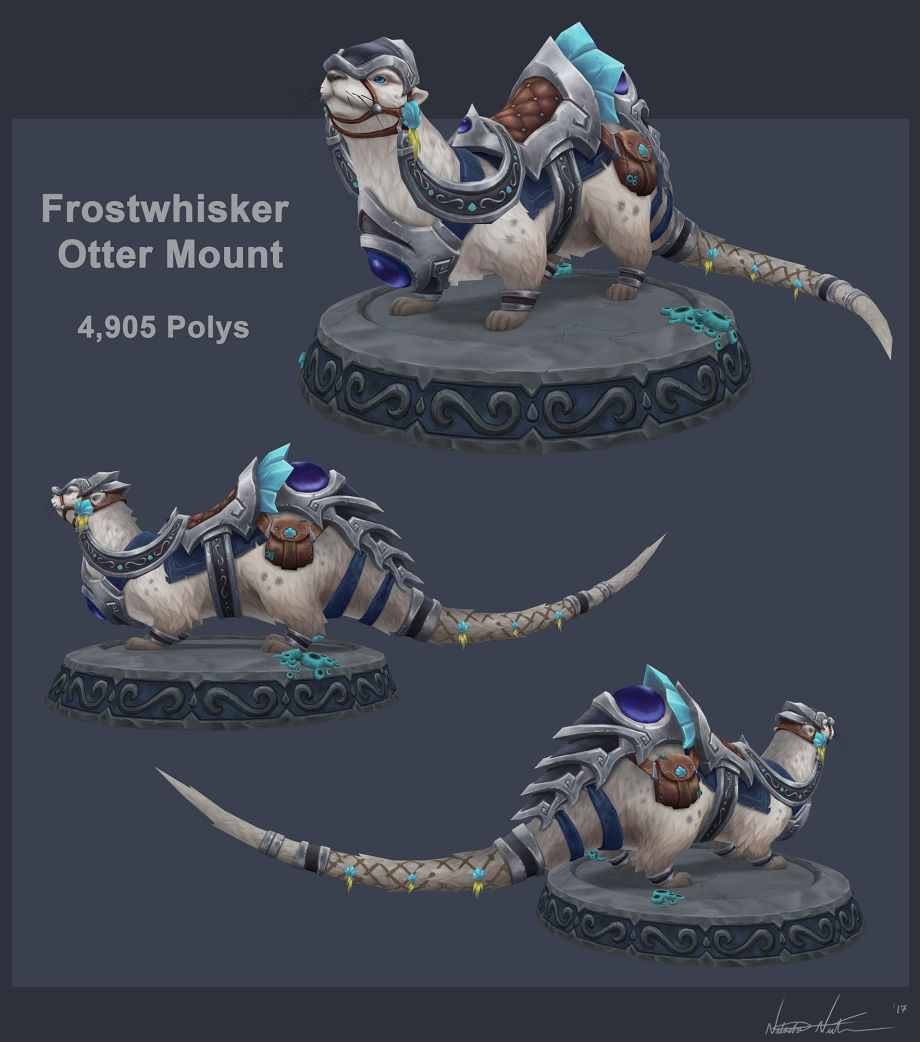 I can’t stress the importance of studying anatomy enough if you want to build 3D characters. Understanding anatomical rules can help you make better design decisions when you are creating characters. Some of my favorite anatomy books are Anatomy for Sculptors by Uldis Zarins and Sandis Kondrats and Complete Guide to Life Drawing by Gottfried Bammes. There are also a ton of great online resources. You can find a lot of informative tutorials on YouTube, Cubebrush, or Gumroad. Forums like Polycount give you access to a community of people who can look at your work and give you feedback. There are also very affordable online schools like BrushForge that specialize in stylized hand-painted work.