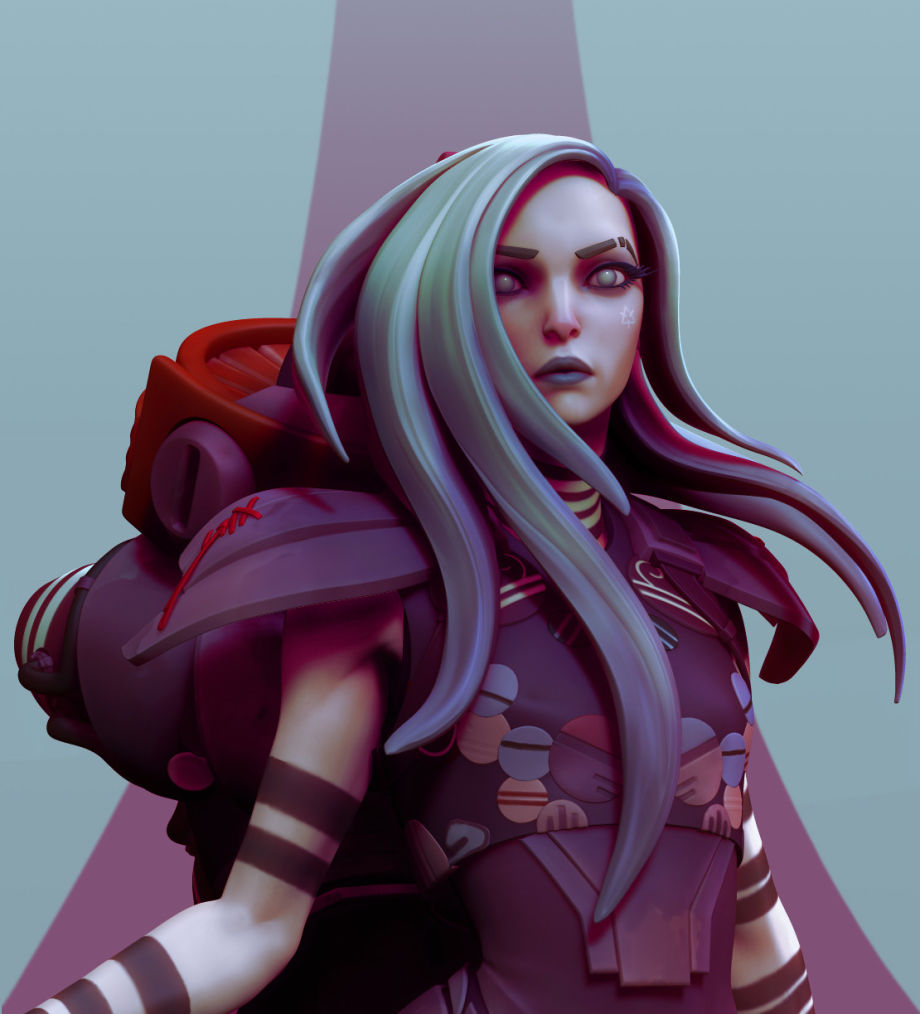 Hello! My name is Nathan Brock, and I am currently a Senior Outsourcing Supervisor at Blizzard. I have the privilege of working with a ton of amazing artists to create characters for Overwatch and occasionally get to squeeze in some art of my own.

I studied Computer Art at Savannah College of Art and Design graduating in 2004 with a BFA. I got my first job at Sigil Games working as an environment artist and switching to character art at the end of the project. Since then I’ve worked at SOE, Trion, and Arkane as a character artist plus did a stint as a producer at Jam City for a few years. All of this experience led me to Blizzard. The role I’m in is largely about giving feedback to other artists providing paint overs, reference, and general help to make the best characters possible. I do tackle skins and weapons as time becomes available. It is important to keep your art skills up to date so you are able to give meaningful and helpful feedback. 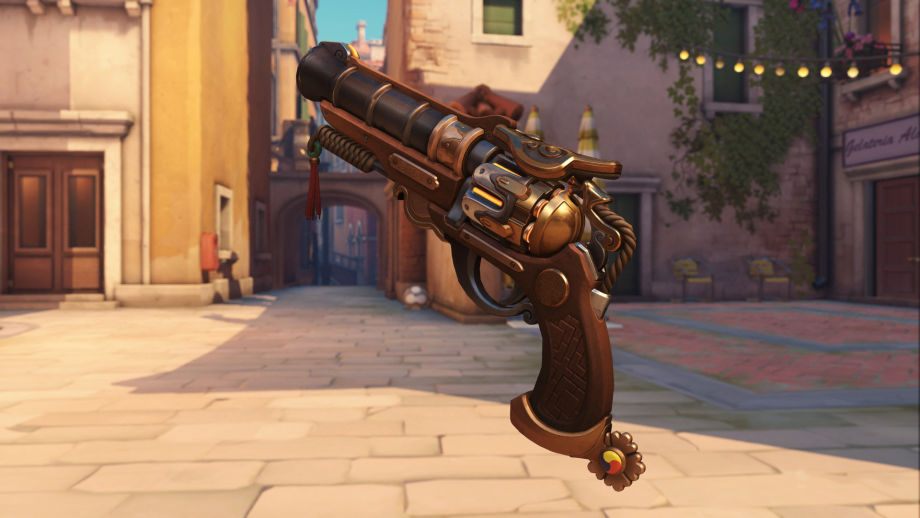 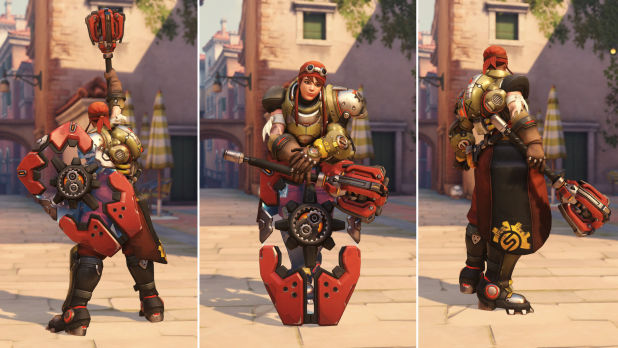 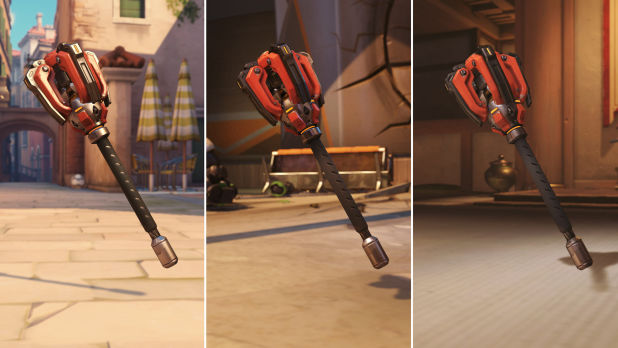 Importance of the Balance in Character Design

For me, character design is all about balance. I really love how Disney balances straight lines against curves in their characters. It makes clean and easy-to-read silhouettes that give the viewers all the information they need to know. That is a cornerstone of a good character design.

Conversely, I find that overly busy designs are usually not successful. That isn’t to say a model with a ton of detail is a bad model, but it is important to find a balance between details and giving the eye a place to rest. Having those “still” areas allows the viewer to appreciate the areas of detail rather than be overwhelmed by them. 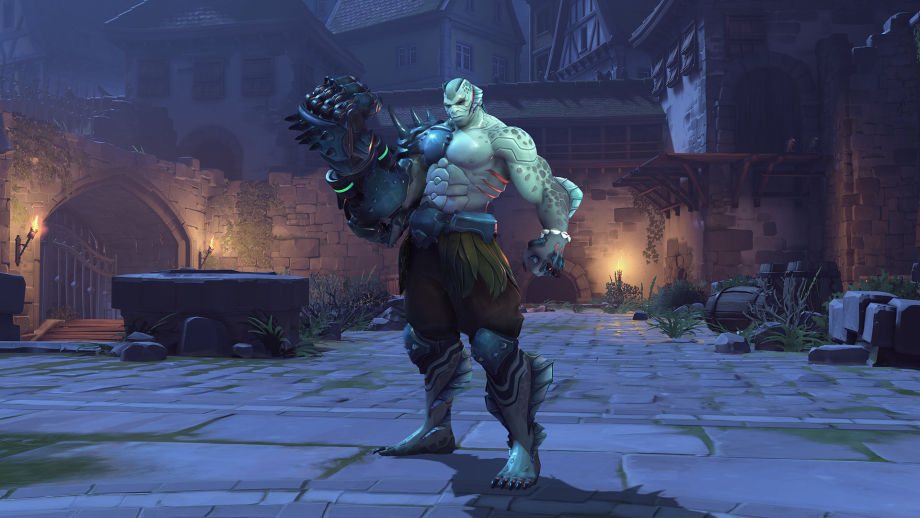 Obviously, I lean towards a stylized approach to character art, but I believe those principles are applicable to even hyper-realistic work. Being character artists, it is our job to make appealing characters. We should use our skills to make a mindful decision about the look of a character. Sometimes high detail or obeying real-world reference is the right choice. Sometimes you need to make a conscious design choice to deviate from that reference. The most important skill an artist brings to the table is the ability to consciously design and not just mimic reference. 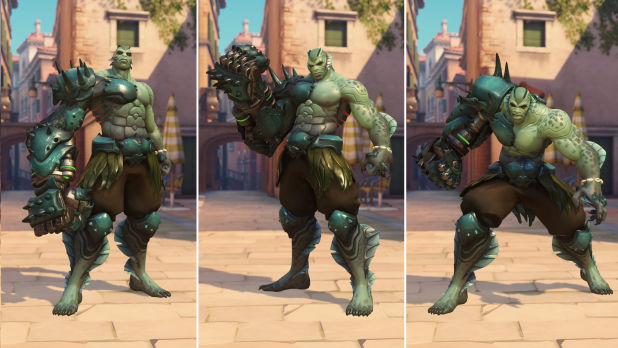 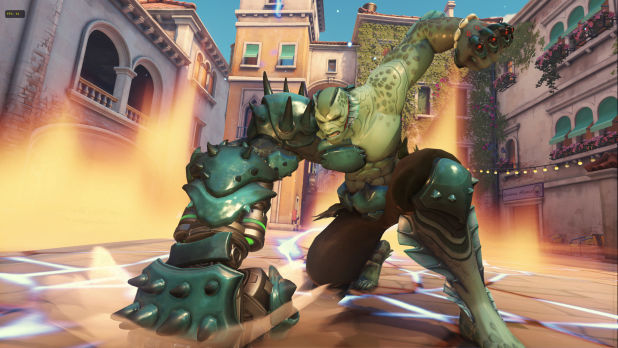 I really enjoy just diving in with a basic sculpt, something that is quick and dirty and honestly doesn’t look that great. But I like that it gives me the freedom to problem solve a design from all angles. Once I am satisfied with the design, I will go back to clean it up and make something I’d actually like to show. I try not to worry at that stage about how clean the sculpt is. What I am really looking for are good proportional relationships and a basic idea of what I want the silhouette to look like. 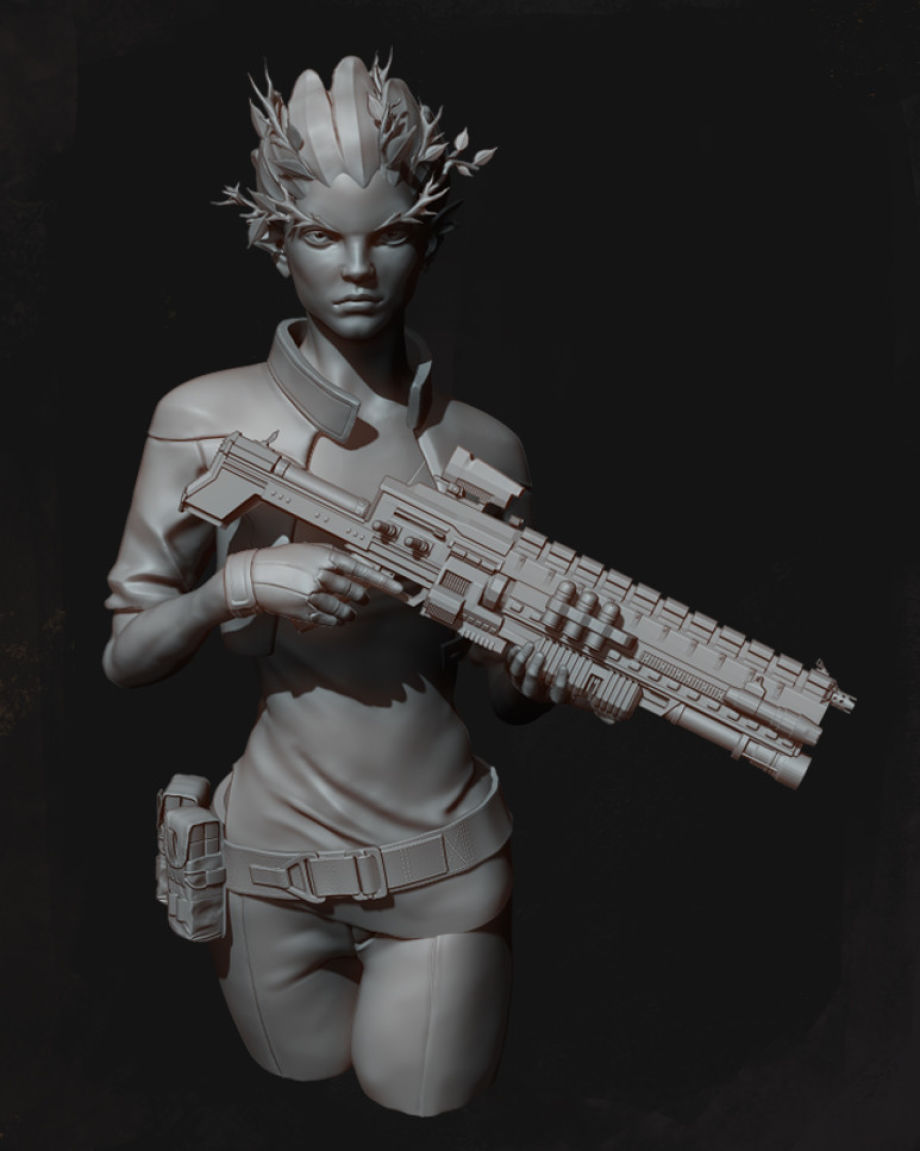 Anatomy of the Exaggerated Bodies

Anatomy can be pushed incredibly far, so long as you know what you are pushing. For example, say you wanted to make a character with arms that reached the ground while standing. I would start by imagining how that character uses the arms. Does it use them for things like walking or climbing, are they meant to be weapons? Then I would start pushing and emphasizing different parts of the anatomy based on those answers, creating longer and thicker than normal arms. The underlying anatomy would still follow what I would expect a human arm to be. There would still be an ulna and radius to think about, and all the flexor and extensor muscles. Having believable anatomy is key. By thinking about that underlying structure you can push the forms while still creating something that is believable. 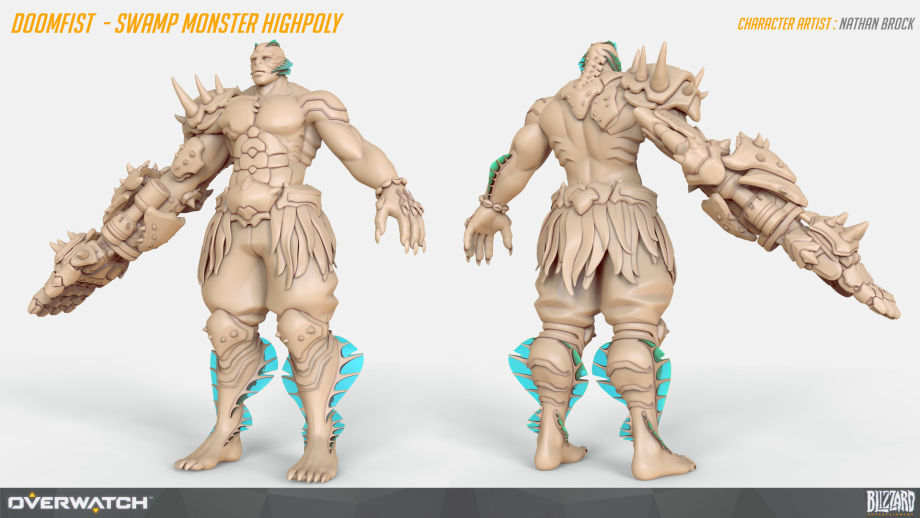 The way I create props and clothes varies quite a bit depending on what I’m working on and what the final product is meant to be. I’ve actually gone back to using Maya in my recent work. Because many things will be baked down to a normal map for the final character I like to use floaters for details ranging from bolts to insets. It is much faster than actually modeling it into the form you’d like it to be on, and bakes down very cleanly. I keep a Maya file with my library of parts which allows me to quickly dive in and get good results. Having a library of previously built assets makes the detailing process more fun. Instead of getting bogged down modeling something for the 100th time, I simply bring the mesh in from my library. Recreating something you’ve already made is good for learning sometimes, but there is a point where you should move on to new things. 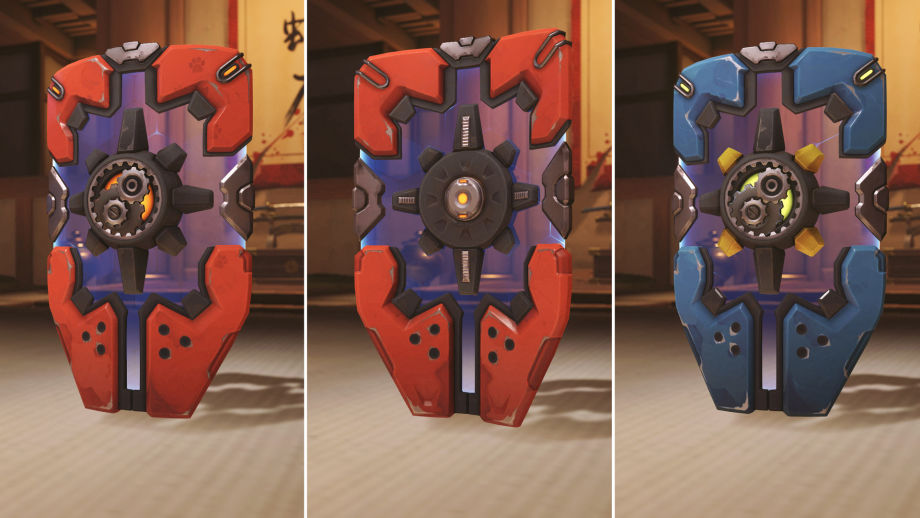 Before I start working on the high poly I like to think about how the low poly will be. Usually, this is in the form of a blockout model that should be a relatively accurate version of what the low poly will be. That allows the team to test the model in the game, dictate what should be baked down, and problem solve any issues early in the process.

The most important step is to understand the limitations of whatever tech you’re working with. Do we support physics or cloth? That changes how I would model something like a skirt. With dynamic physics, I would actually create something that is very smooth and feels stiff allowing the cloth simulation to bring it to life. If that isn’t an option then I would try to create a pose and folds that feel believable, but won’t create problems when the character moves.

When considering what to bake down, a good rule of thumb is to bake anything that doesn’t affect the silhouette. If adding geometry to an area isn’t going to help the overall read of a character then it probably doesn’t need to be modeled.

I tend to think of all the programs like Substance Painter, Quixel, etc. as just tools. Each engine has its own quirks regarding gloss/roughness values and how it handles metalness or specularity. So pick the tool that works best for your pipeline. PBR is wonderful as it gives the art team consistent results. You know what to expect when using certain values, and the team as a whole can establish certain materials as the “correct” version to use. Regardless of which program I’m using, I do have a series of steps I like to go through while building materials on my characters.

I start with getting down basic albedo colors on the mesh. This will help me see how my hues and values are helping or hurting my character very quickly. Once I am satisfied with those, I move on to defining materials. This is the chance to establish metals and non-metals and overall gloss values across your character. For me, this is similar to the albedo pass where I try to look at the character as a whole and see what is working. After that, it really is just details. Adding color gradients, weathering, and other details to help bring the character to life. 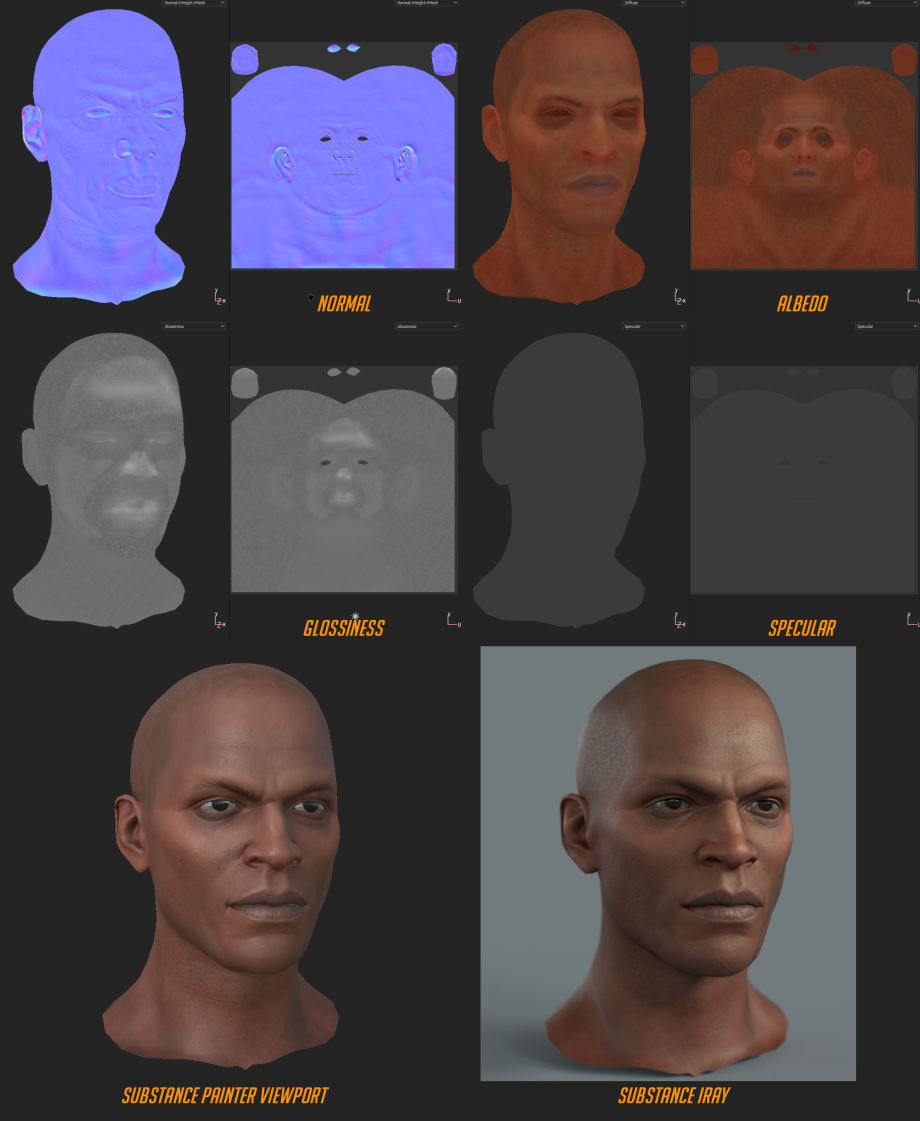 Some lighting in your character’s texture sheets is still very necessary. Now whether you drive that in your albedo, an ambient occlusion map, or both is a matter of preference and engine capabilities. Self-shadowing in a game engine is currently not able to work at the level of fidelity needed. For example, most real-time engines will not be able to create a soft shadow from the browline down to the orbital socket when a light is above the character. It’s great for helping ground some things like a large backpack onto a character, but there is still a lot of room for improvement on the small shadows. So adding these sort of touches help make the character feel more grounded and real.

As far as makeup or dirt, it is important to not only include those in your albedo but also your specular and gloss maps. In most cases, I like to think about it as a completely separate material type from what it is on top of. That helps make it believable and adds interest to the character. 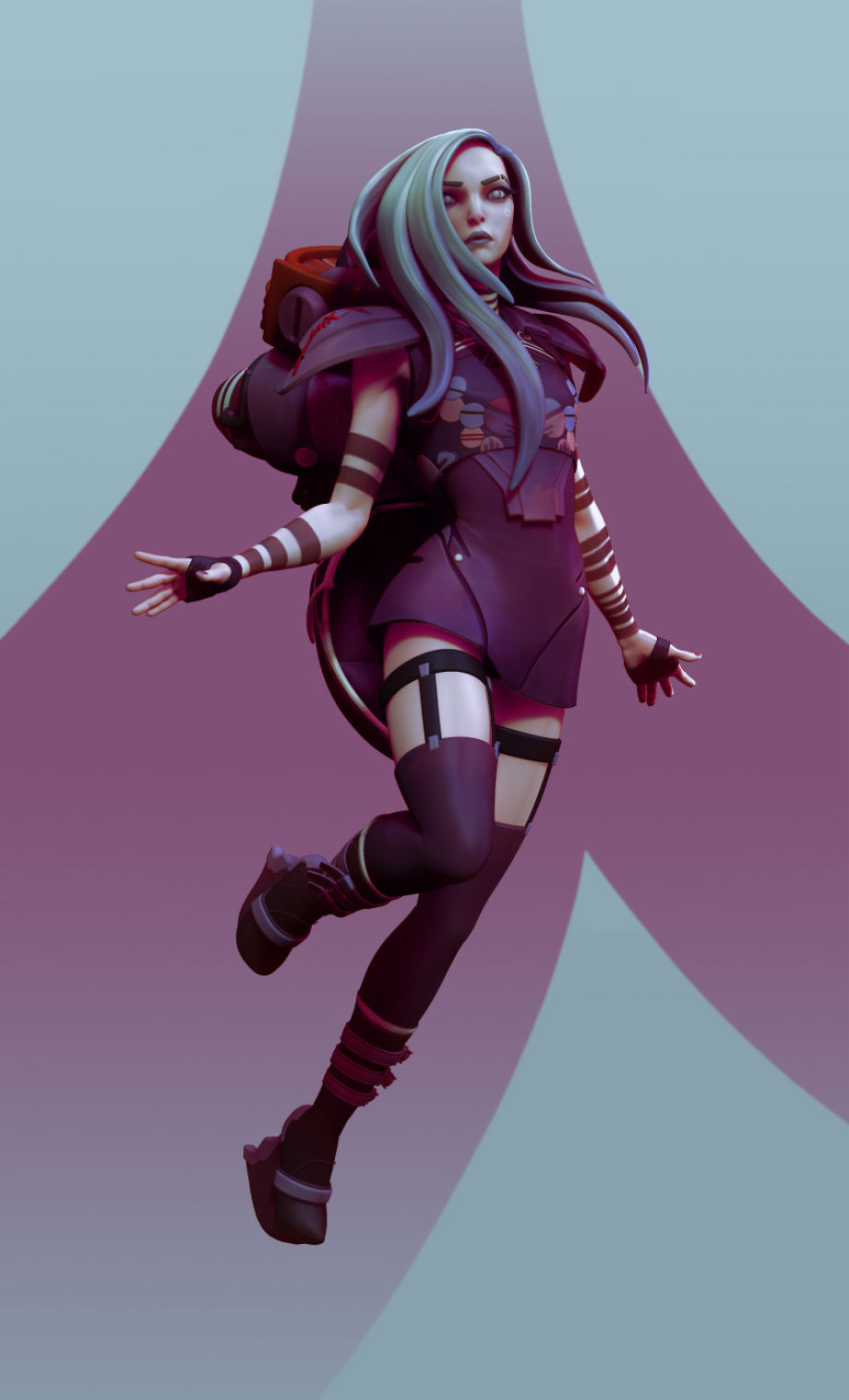 I try to test in the engine as much as possible. Early on testing animations isn’t necessary, but it is an absolute must when you finalize the product. Watching your model move will expose all sorts of things that were not apparent at bind pose. For example, you may have painted some AO underneath the arm that looked good, but is far too dark when a character lifts their arm.

Have a good relationship with your animation and tech art team throughout the process. Iterating with them is so important to creating the best possible product for your players. Remember, this character is a work of art by a whole team of people, not just you. Working together will always make a stronger character and will make you stronger as an artist. 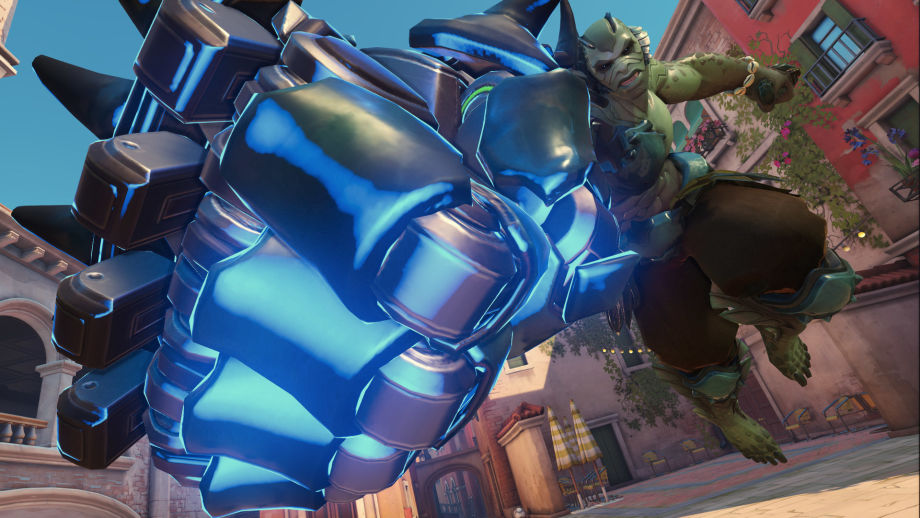